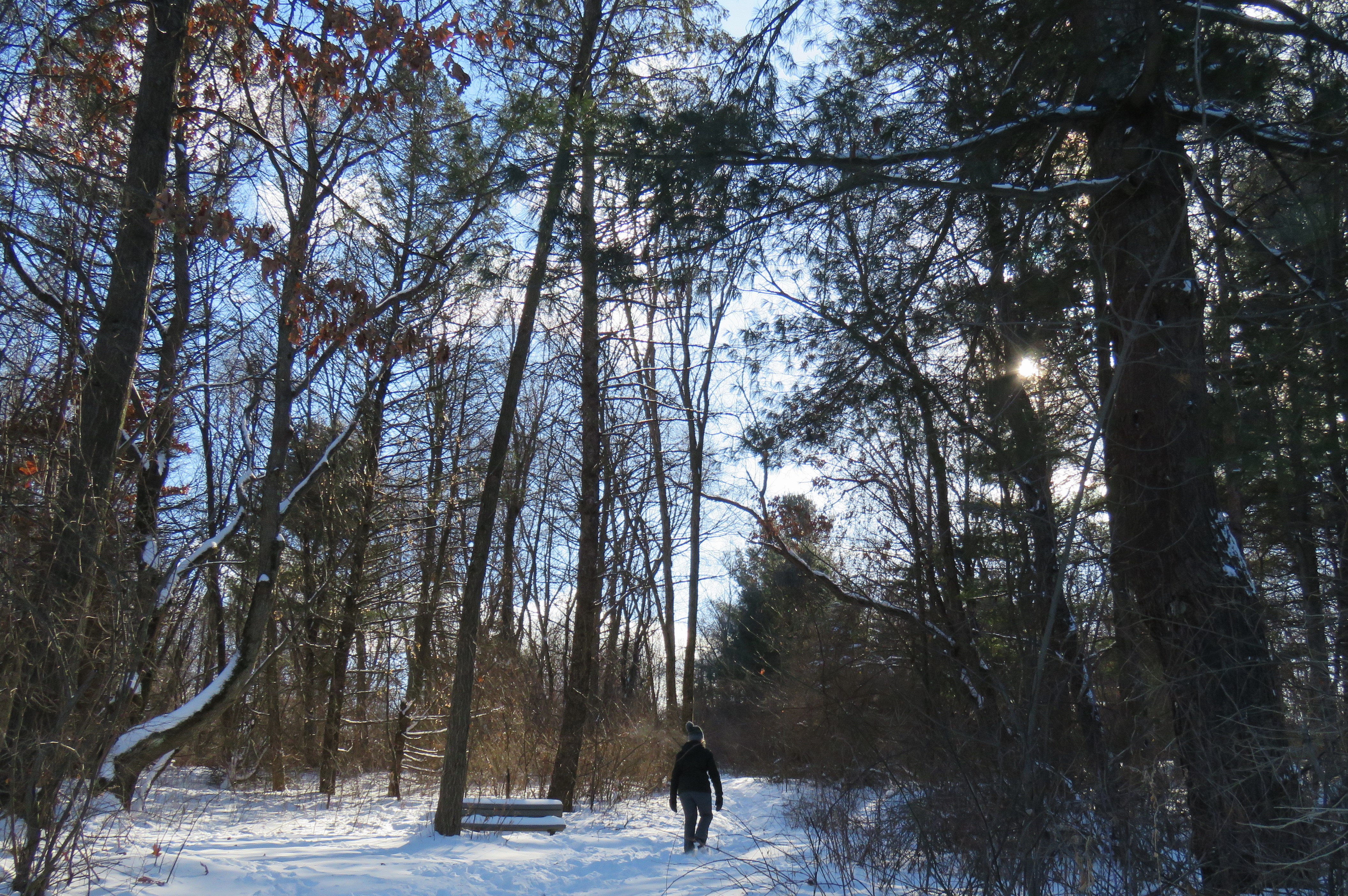 Henry David Thoreau wrote, “Live in each season as it passes; breathe the air, drink the drink, taste the fruit, and resign yourself to the influence of the earth.” That memorable quote of Thoreau applied perfectly late last Thursday afternoon as I set out to explore Draper Twin Lake Park during the Polar Vortex. The temperature hovered at zero degrees. I resigned myself to the influence of the earth and with situational awareness in mind, and a brave nature-loving friend in tow, it was time for my first nature exploration winter hike at Draper. 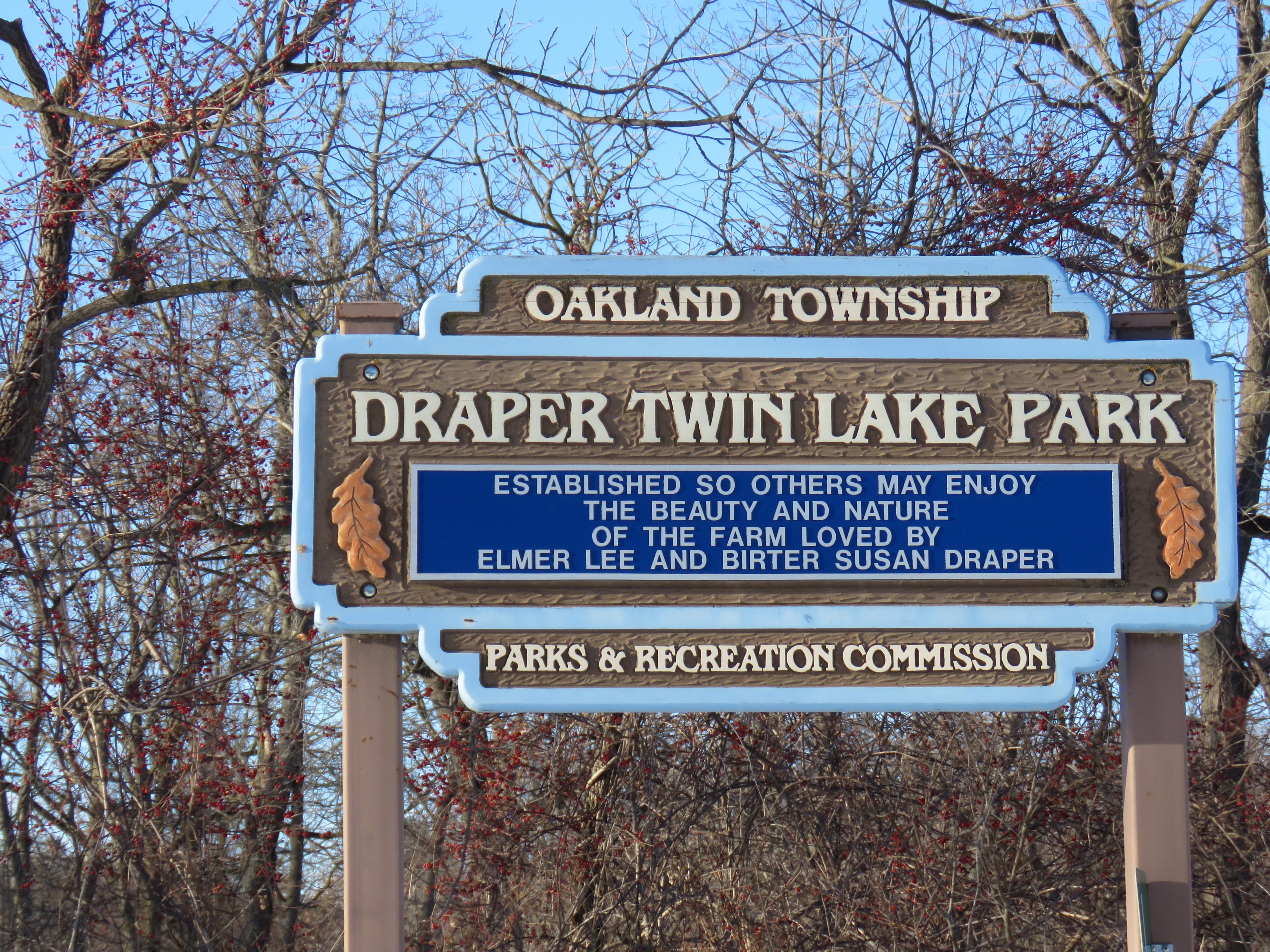 Draper Twin Lake Park provides habitat for spectacular prairie wildflowers, butterflies, dragonflies and damselflies in every color of the rainbow, and many shades in between. Observers of nature might see Great Blue Herons, Great Egrets, Belted Kingfishers, Green Herons and Trees Swallows from the dock on Twin Lake East if they approach quietly during the warm months. The marshy areas of the park resound with the music of spring peepers and songbirds in early April. Leopard frogs leap about meadows on moist summer mornings and sometimes a Blanding’s turtle may be spotted sunning on a partially submerged log, all but hidden amidst shoreline vegetation. Sandhill Cranes stalk through fields of prairie wildflowers that sway to the rhythm of summer breezes.  Autumn becomes a special time at Draper as the duel between the seasons accelerates and the rich scents of nature become more distinctive, and the pace of wildlife seems to quicken. 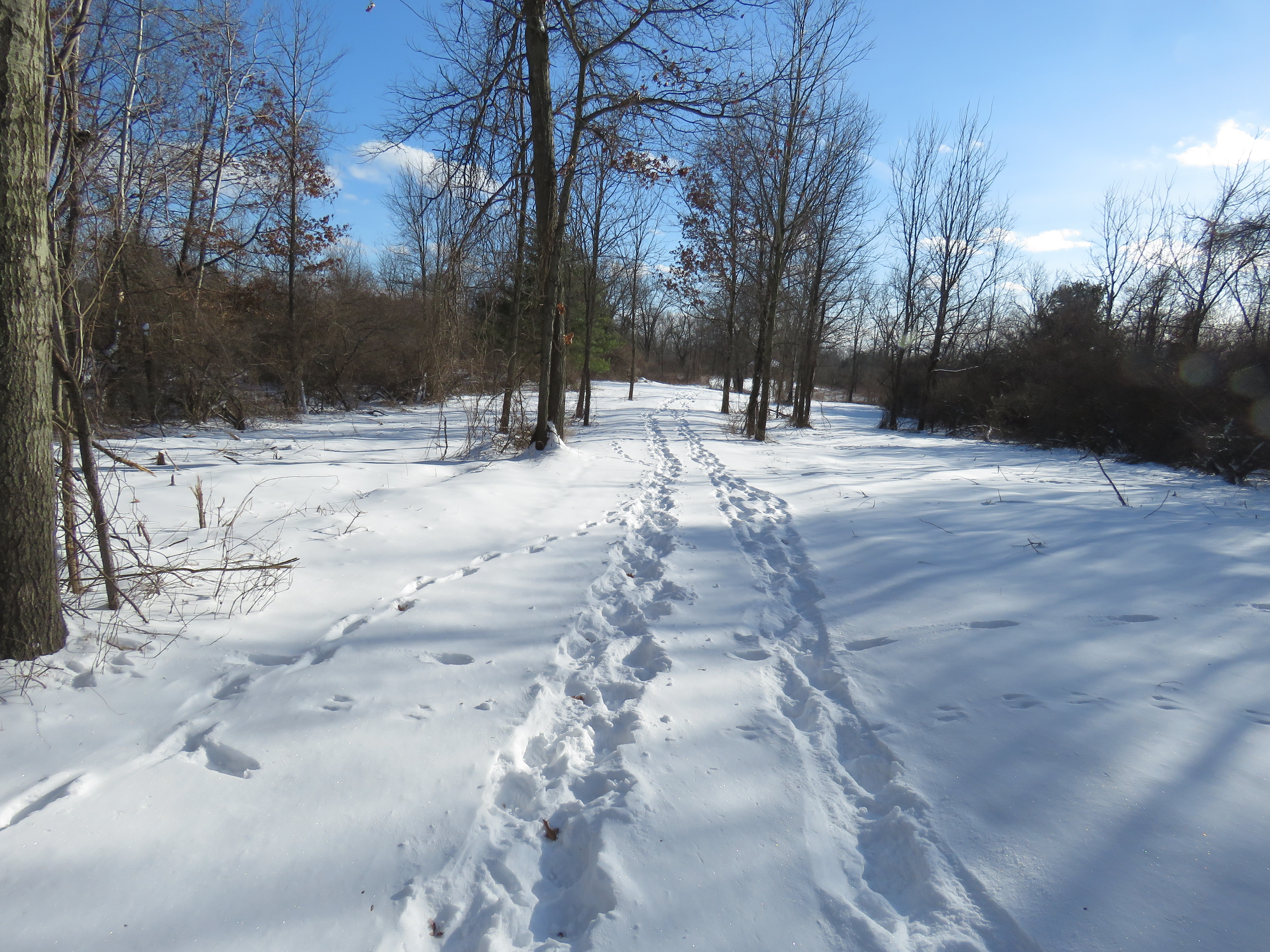 The polar vortex brought silence, solitude and a feeling of peaceful calm.

This nature-embracing 90-acre park managed by Oakland Township Parks and Recreation first opened to the public in July of 2006 and it remains one of the lesser known parks in Oakland County. It’s a well-managed wildland gem that protects woodlands, wet meadows, marshes and most notably a 20-acre field, which is being restored back to native prairie habitat by the department’s land stewardship team with the financial help of a US Fish and Wildlife Service grant. I was not sure what to expect on the polar vortex hike and thought I might end up writing “not a creature was stirring, not even a mouse”, but our truly frigid two hour exploration under a brilliant blue sky revealed endless tracks of white-footed mice. 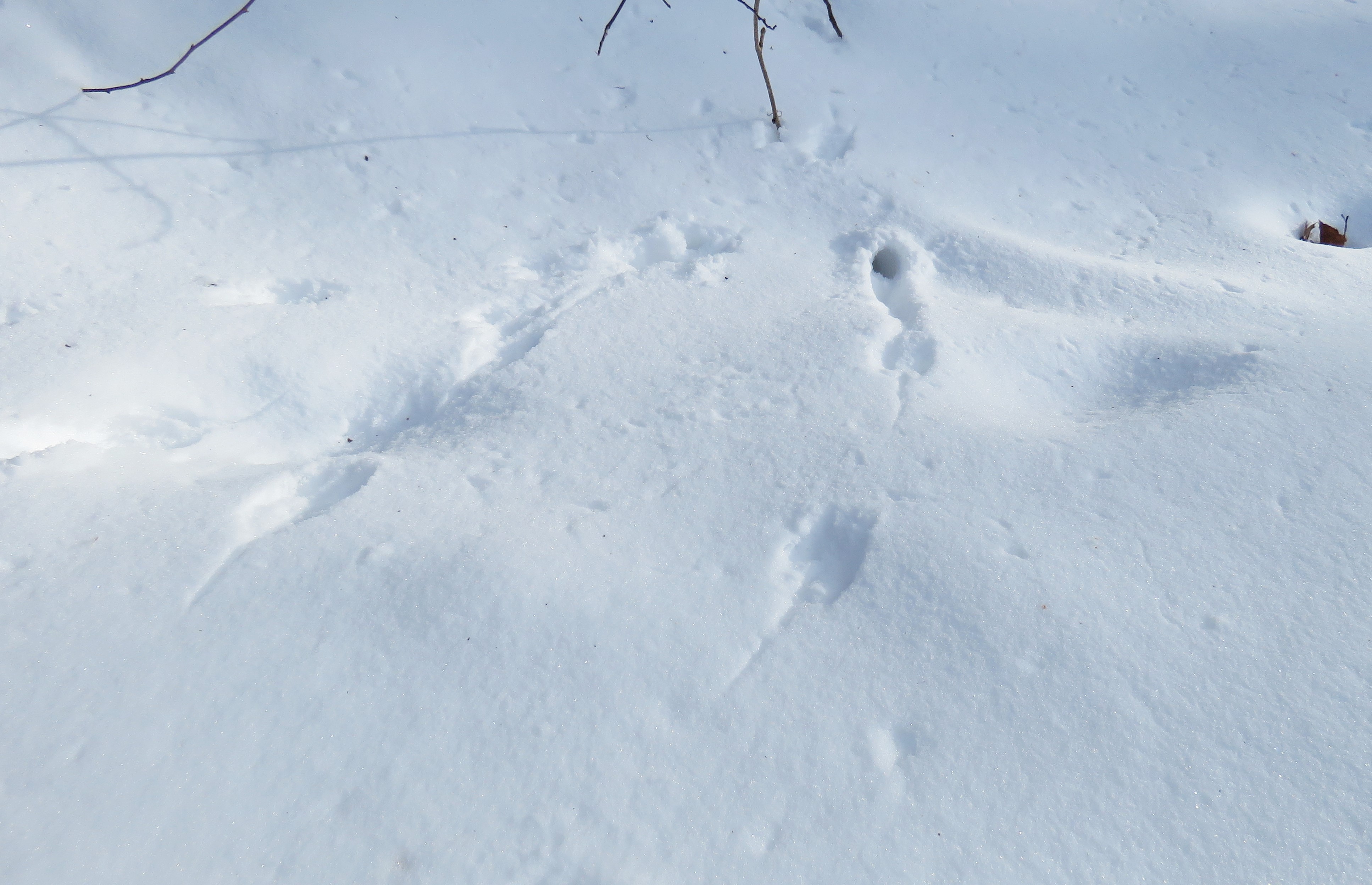 We started our exploration at the west entrance of the park located at 1015 Inwood Road and trudged slowly through the snow down a .4 mile trail that leads to the lake. Visitors need to know there are no facilities at the park, but there is a kiosk at the west end of the parking lot with a helpful trail map and a display panel of upcoming programs at Draper and other parks managed by Oakland Township Parks and Recreation. 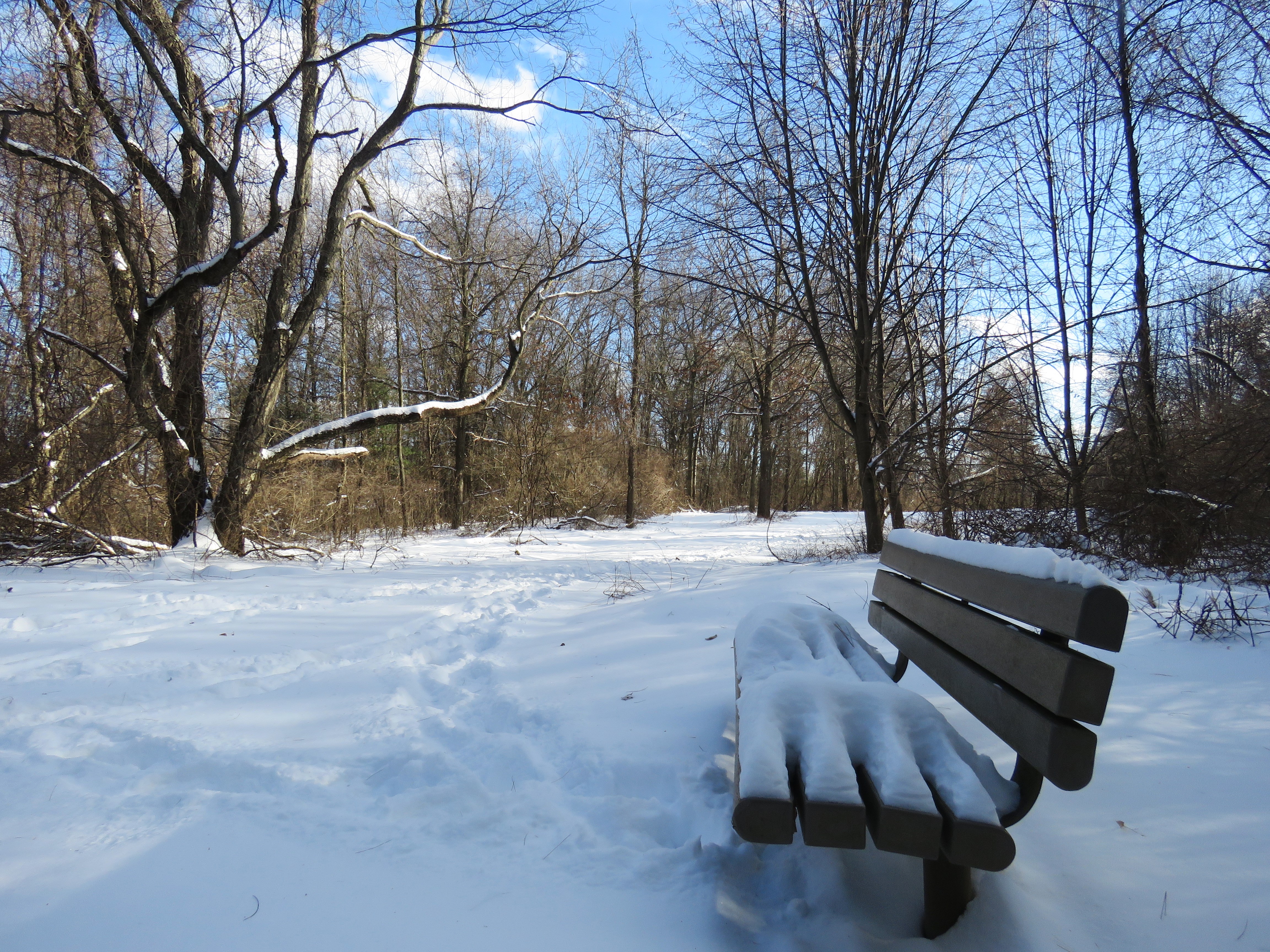 We trudged down the snow covered trail making note of deer and red squirrel tracks, and white pine boughs bent low under the weight of snow. A “lonely” trailside bench is located under pine trees just before the trail begins a serpentine pattern for a few hundred feet as it descends to the south shore of the lake. The dock is a great location for early morning bird watching, quiet solitude, and in much warmer times, fishing for the kids.

Meandering cautiously onto the ice, we followed the shoreline for a few dozen feet mindful of the fact that no ice is guaranteed safe ice, even during a deep freeze, especially at glacially created,  spring fed-lakes with thick shoreline vegetation. From there it was back up hill, taking note of deer bedding sites just yards from the trail and tracks belonging to wild turkey. Clusters of dry maple seeds sparkling in brilliant sunlight served as a reminder of seasons to come. A snow covered bird’s nest caught my eye because tracks of white-footed mice lead to the base of the shrub that cradled the nest, a perfect nesting site out of reach of coyotes and red foxes. We noted coyote tracks from the night before and I suspect that coyote was curled up someplace in the woods, warmer than we were, and more aware of our presence than we were of its location. 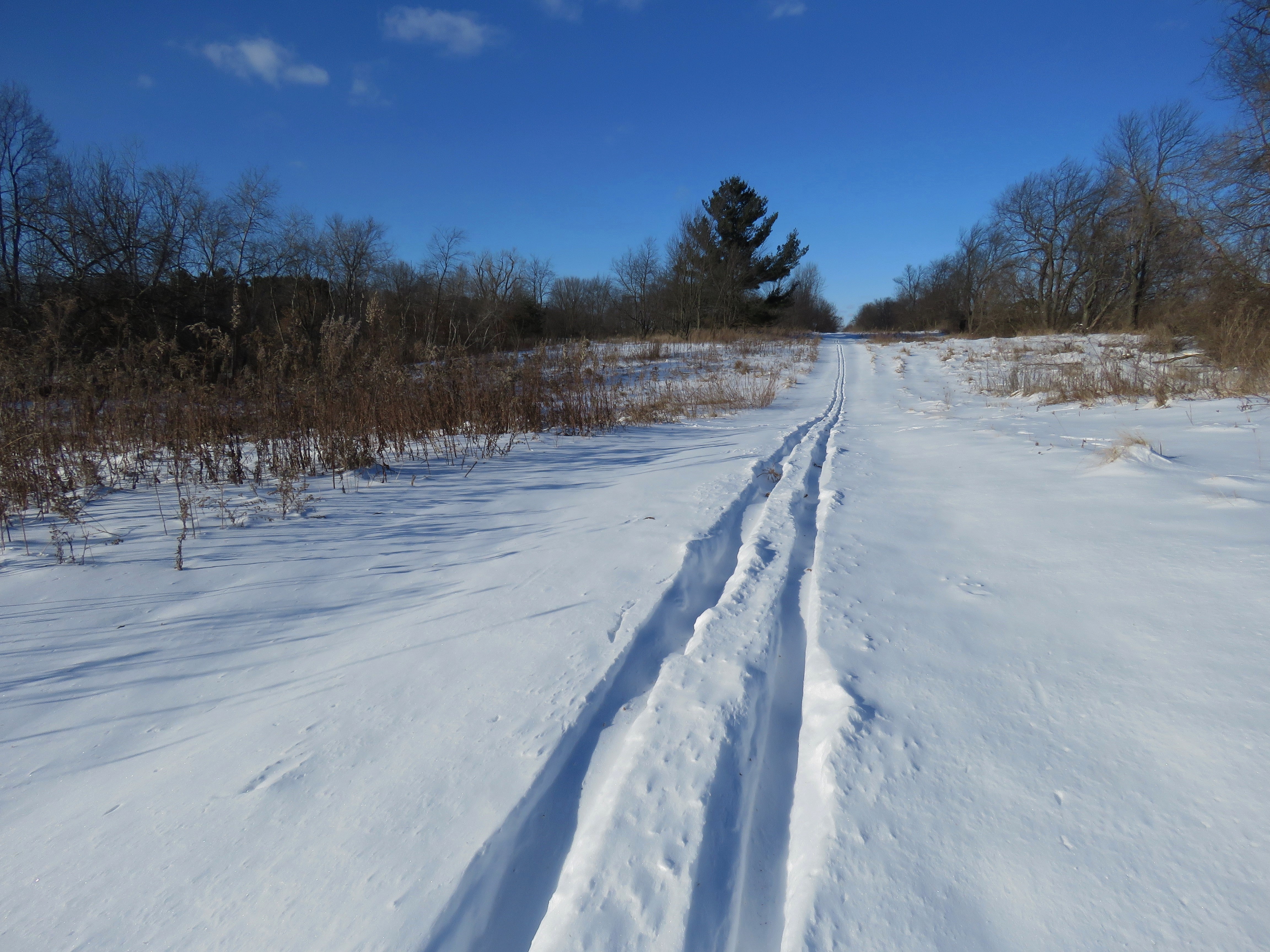 Ten minutes of walking slightly uphill brought us back to the car, the only car in the freshly plowed parking lot. From there, we drove a few hundred yards east along Inwood Road to the lesser used east entrance at 1181 Inwood Road. We carefully pulled off the road and parked in front of the park’s maintenance garage. A fresh set of cross country ski tracks drew our attention. They led straight as an arrow northward on the trail along the east side of the prairie restoration area. We followed, and as we passed a stately white pine overlooking the edge of the prairie we chatted about what a great perch it would be for a Great Horned Owl. Tracks of white-footed mice, a major food source for owls, were abundant along the edge of the restoration area, an area that provides cover and seeds for many species of winter active birds and mammals.

Gentle gusts of cheek-numbing winds accelerated slightly as we approached Parks Road, the northern perimeter of the park where the looped trail turns westward for a few hundred feet before heading south along a forested edge zone. It’s also the location where the trail embraces a shrubby area, where song birds of all types were feeding on seeds. We saw none, but we knew they had been there from the dozens of delicate tracks, and occasional wing prints in the snow. The only birds we noted were a half a dozen crows that loudly announced our intrusion and a lone Red-tailed Hawk soaring high above. 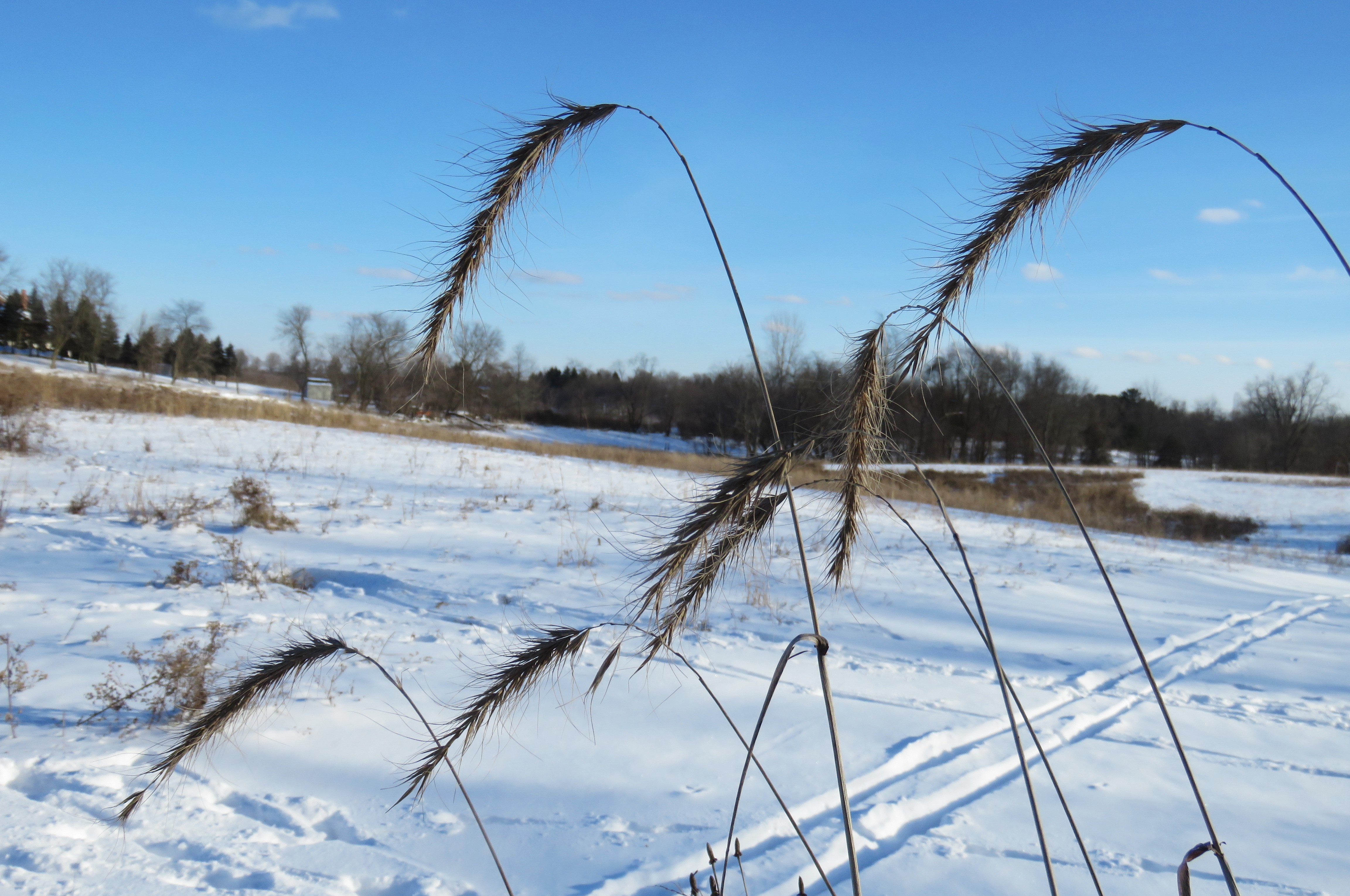 What really drew my attention as we finished our frigid polar vortex trek with the mercury slipping below zero were the swaying stems of the prairie’s native Canada Wild Rye against a clear blue sky. That image was a stark reminder that this former farm land, donated to the township by Lee and Jean Draper, truly is a gift to nature’s way and an open textbook for humans that understand its beauty and uniqueness in a landscape with increasing development. I’m an unabashed partisan of the wisdom and quotes of Aldo Leopold, author of Sand County Almanac. If I was to be asked to design an interpretive sign for the prairie, it would include these words from Leopold, “A thing is right when it tends to preserve the integrity, stability and beauty of the biotic community. It is wrong when it tends otherwise.”

Winter is never a time for humans to hibernate, it’s a time to live in each season as it passes and celebrate the influence of the earth with an adventuresome hike on the wilder side of Oakland County.