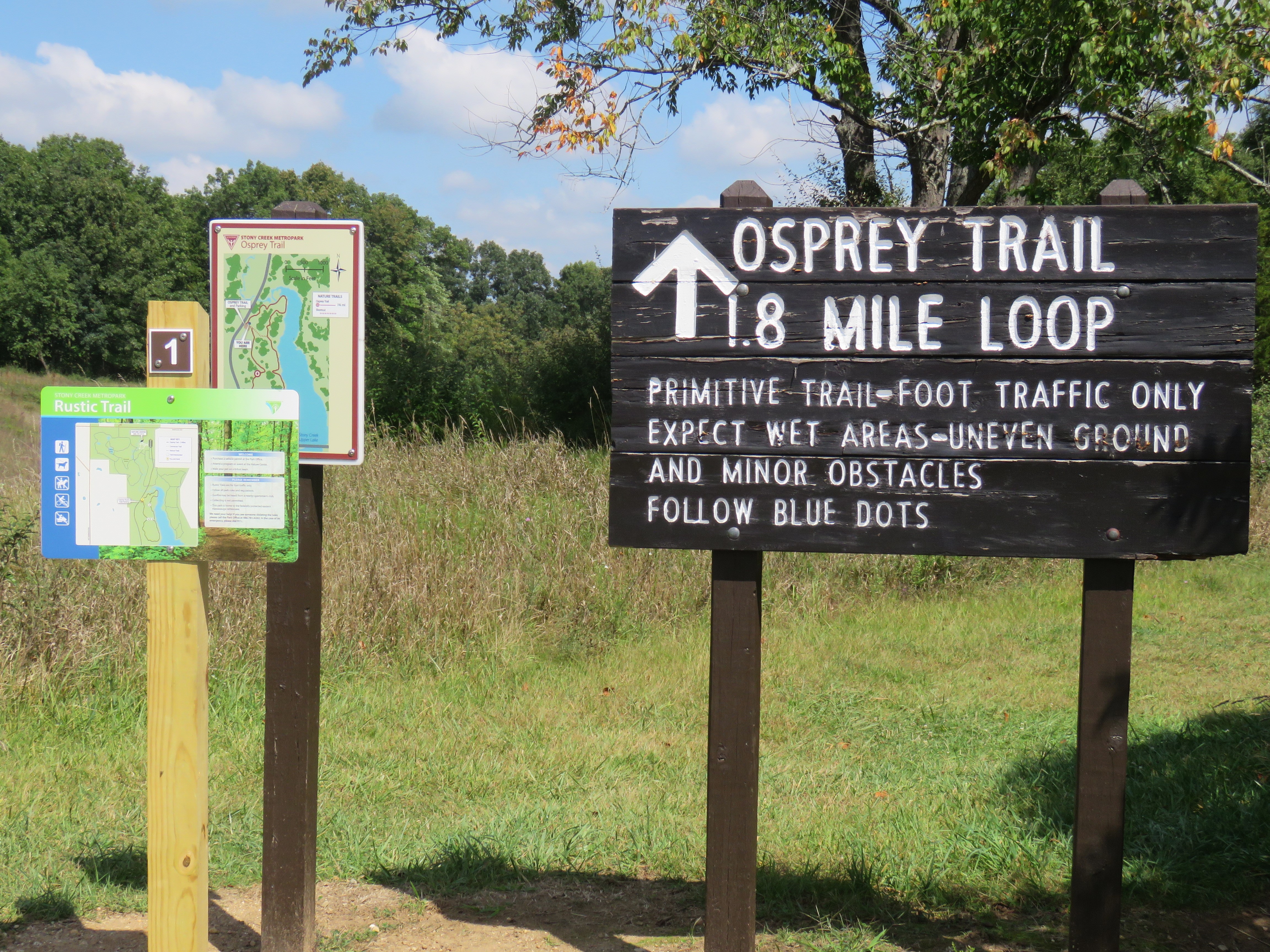 “Get that ‘up north’ feeling without leaving the suburbs at top-rated Stony Creek Metropark. Extending across Oakland and Macomb counties, the park’s 4,435 scenic acres abound with opportunity for outdoor recreation all year-long” (Huron-Clinton Metropolitan Authority). There’s so much more than an up north feeling that Stony Creek offers, but just the words “up north feeling” was enough of a reminder for me to head back to the eastern edge of our county for a final hike of summer. 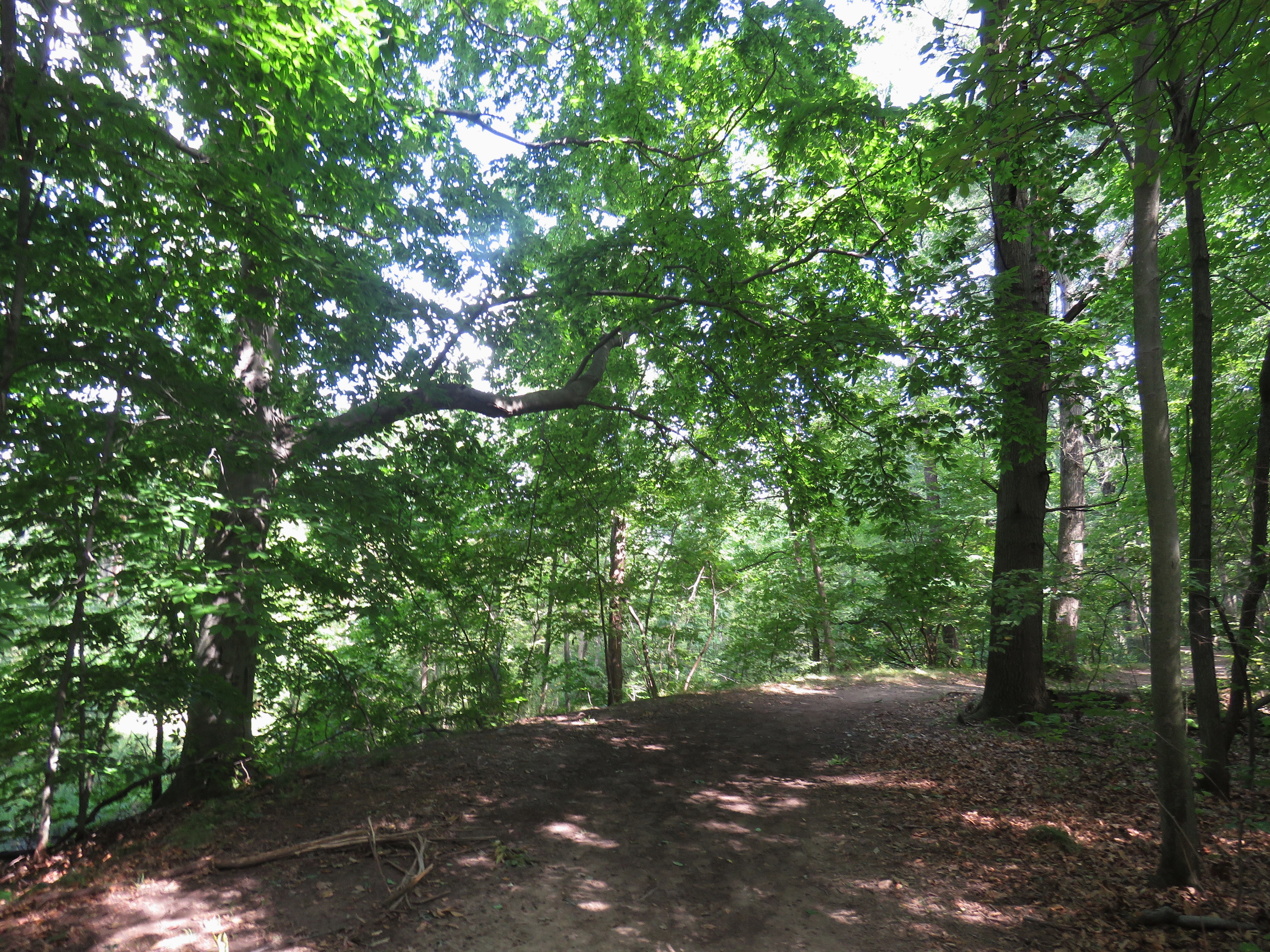 The crispness of autumn arrived with the solstice; woodlands are essentially mosquito free, leaves of sassafras and maple are already tinged with splashes of red, fantastic forest fall fungi are emerging and bird migration is underway. One of the easiest places to embrace the changes of the season at Stony Creek is on their two-mile long Osprey Trail, a foot-traffic only nature trail that’s a great gateway to what’s happening in the early days of autumn. I started my trek at the easily accessible and well-marked trailhead and headed clockwise into the woods.

The primitive natural surface trail is easy to follow, and wide enough in most places for two or three people to walk side by side. First timers should review the signpost map that’s at the trailhead and will be comforted in knowing that those colorful maps are also located at the junctions along the looped trail. There are small “social” trails (unofficial spur trails) that seem to “sprout” along the route, but the official trail is unmistakable and indicated in some sections by blue dots painted on trees. 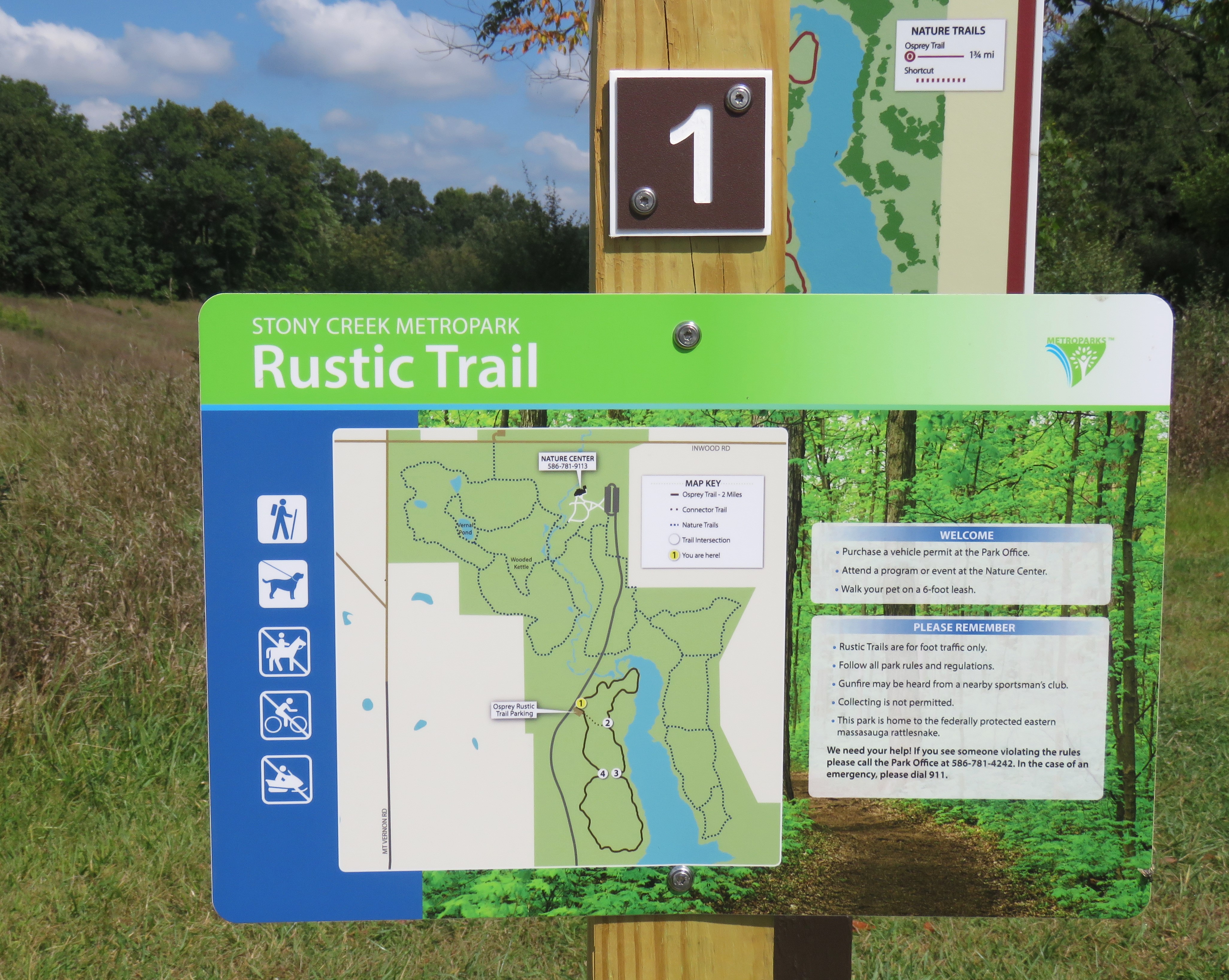 More than ten years had passed since I last meandered the aptly named Osprey Trail, however, if you are looking for osprey in these early days of autumn, this trail is not the place to search. The fact that most osprey in our area have already migrated south for the season is not the reason why. It’s unlikely you will ever see one along the trail, no matter the season, except perhaps a fleeting glimpse of one hovering and then diving to catch a fish near where the trail overlooks the west shoreline of Stony Creek Upper Lake. So why is it named Osprey Trail when encounters with deer, wild turkey and armies of restless chipmunks are far more likely? Flash back to 1998. 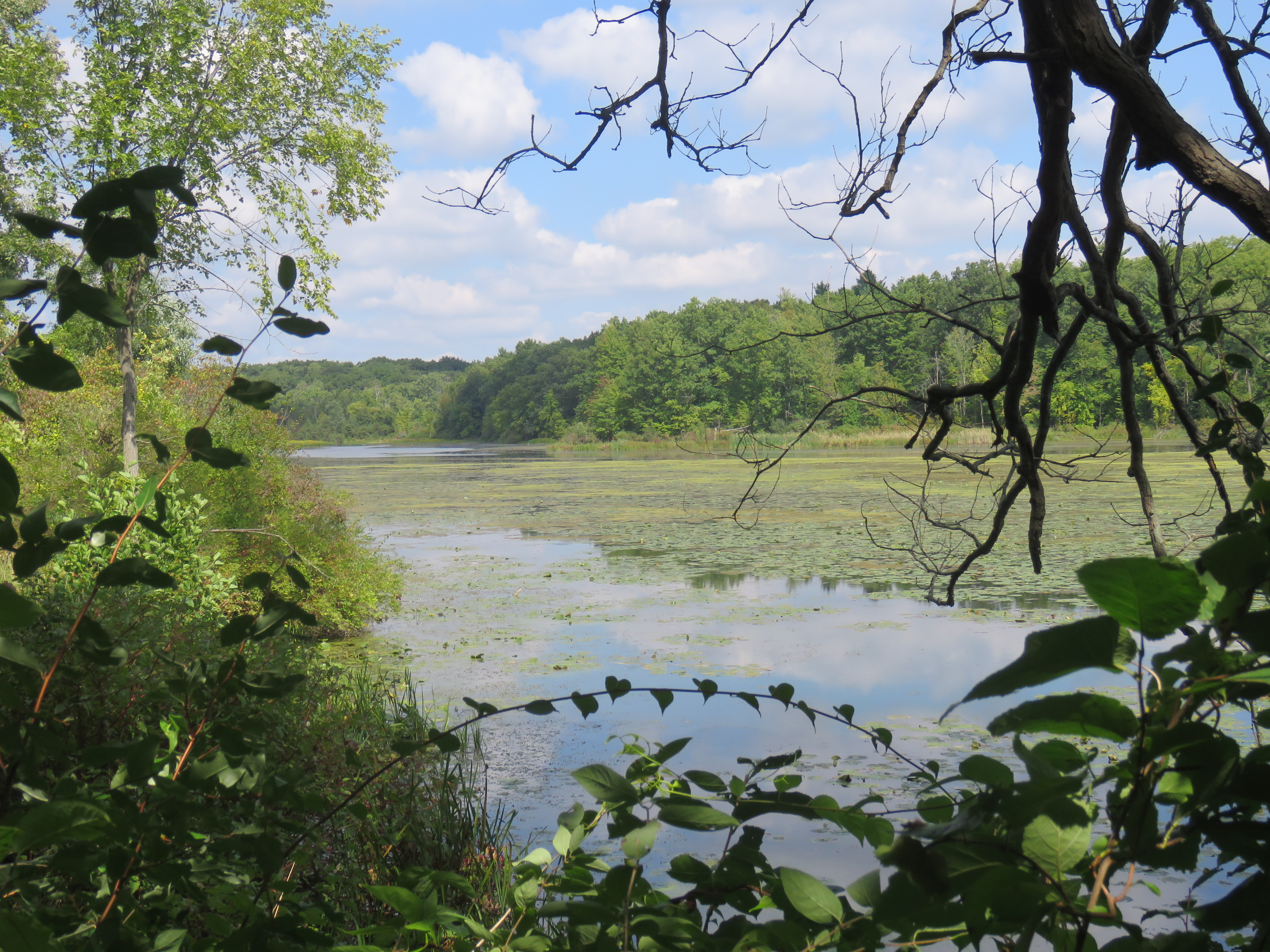 Osprey are the only hawk species on the North American continent that feed exclusively on fish. They were once found throughout the State of Michigan, but their numbers plunged by the 1960s due to widespread use of the pesticide DDT coupled with wetland destruction and human initiated disruptions. DDT was finally banned in 1972 and osprey numbers slowly climbed in the northern reaches of our state. However, Oakland County and the rest of Southeast Michigan remained nearly free of osprey even with the abundant lakes that offered superb fishing for osprey, a raptor known by many as the “fish-hawk.” In 1998, the Michigan Department of Natural Resources embarked on a science-based program in partnership with Detroit Zoological Institute and the Huron-Clinton Metropolitan Authority to reintroduce osprey to Southeast Michigan. The goal was to establish a self-sustaining osprey population in southern Michigan through a “hacking” program, in which osprey chicks are removed from active nests in northern Michigan and placed in new secure habitat that could easily support osprey across the southern half of the state. Wildlife biologist and trained volunteers assisted in their raising until they took flight. 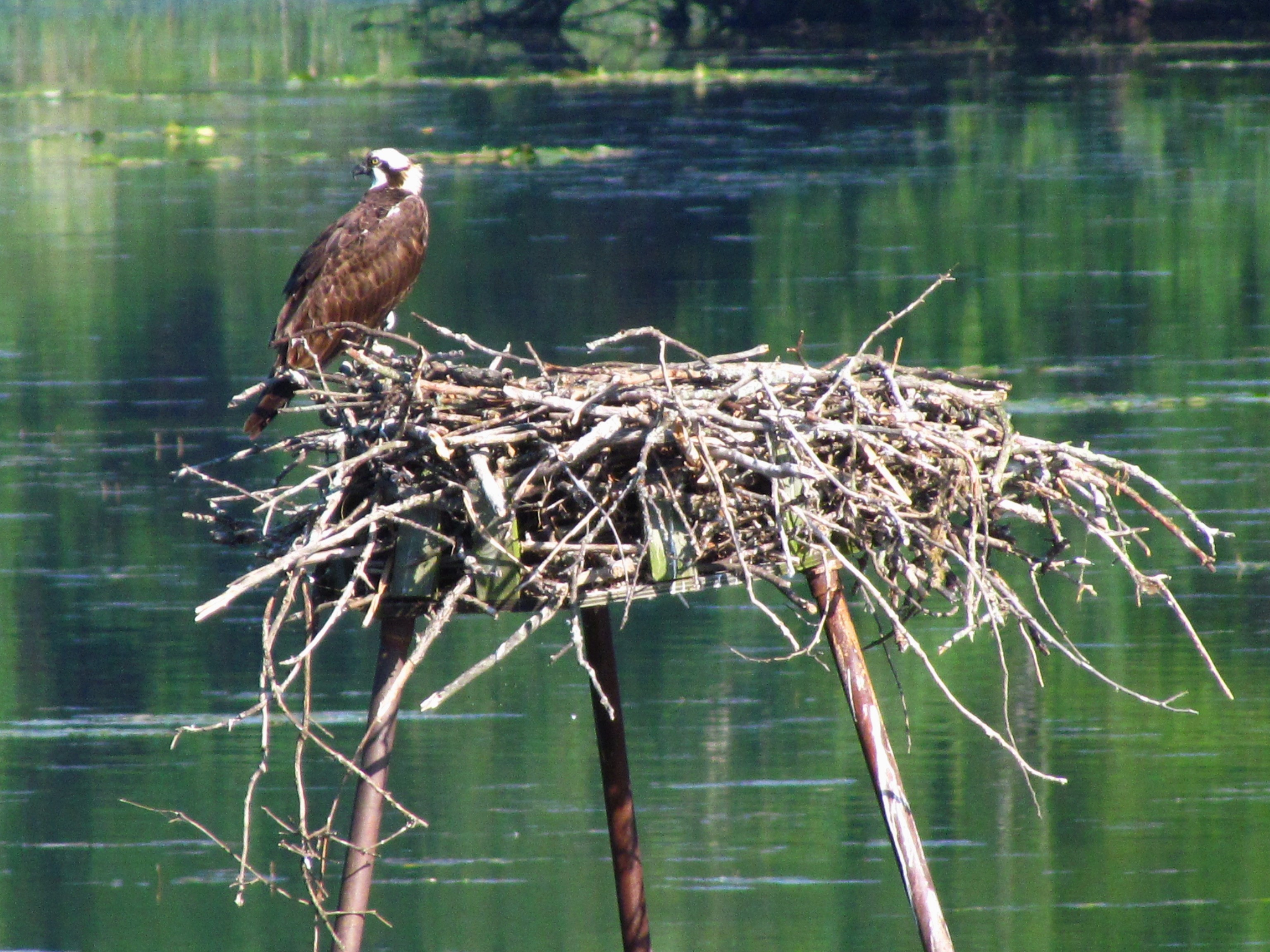 Kensington Metropark was selected as a trial site because of its protected natural features and excellent habitat. Osprey chicks were raised and released at Kensington from 1998 through 2002. In 2003, an isolated trail section of Stony Creek Metropark was added to the program. That trail became known as the Osprey Trail. The Southeast Michigan hacking program was successful. Osprey are now well established in our county and most of them favor cell towers for their nesting sites. The accompanying osprey images were photographed at Kensington Metropark and a Fenton cell tower not far from Seven Lakes State Park. Hikers on the Osprey Trail may notice an old interpretive sign about the hacking program and the remains of an artificial nesting platform that still stands in a marsh not far from the trail. For additional information about hacking, visit the Osprey Watch of Southeast Michigan website.

As I hiked, I intentionally diverged off the main trail and headed down a short and narrow social trail, but was not quick enough to capture images of my quest: wood ducks that erupted into flight at my approach. My attention then focused on a Cooper’s Hawk perched near berry-rich shrubs and trees. I suspect that bird-eating accipiter was waiting for songbirds to unknowingly come in for their feast of black cherries.

Wild fruits and berries were abundant along the trail. Slightly sour apples, wild black cherries and one of my autumn favorites—the very tart fruits of autumn olive were all sampled as I hiked. Casual foragers need to be cautious however, for among the mix of trailside wild berries found all across our county is a poisonous species: pokeweed. I noticed pokeweed with its characteristic purplish stems and magenta berries growing alongside a trailside black cherry tree. Birds were feasting. Humans cannot.

My favorite flora encounter along the trail was jewelweed, a rather common plant that is also known as “touch me not.” Jewelweed glistens in the morning dew of early autumn and when sun shines, tiny droplets of water bead up like sparkling crystals on the plant’s leaves, inspiring the name “Jewelweed.” When their slightly curved green seed pods are ripe and swollen, and are touched, the seeds “explode” outwards, sometimes with a slight audible noise, thus the name “touch-me-not.” That’s their method of seed dispersal, a great “Nature Lesson 101” for parents to share with their children. Field guides state that a poultice of their crushed stems and leaves will reduce the itch of mosquito bites and poison ivy, a method I have used with success.

With most of the flora distractions behind me, and my fingers stained with berry juice, I continued to wander the trail at a snail’s pace, enjoying endless moments of peace and solitude. Nature is always full of surprises and perhaps the most pleasant surprise came near the trail’s end, just a few hundred feet from the small parking lot. A spacious meadow presented a 360-degree view of the surrounding land. A red-tailed hawk circled above the meadow while gray squirrels scurried about, apparently inspecting the ripening and abundant acorns on oak trees in the meadow.

Perhaps do what I did and walk a few dozen feet off trail into the meadow and do nothing but look around you and listen to the melody of insects, bird songs and wind rustling the leaves. While I was there, gentle puffs of wind gave flight to the silky seed-bearing parachute of swamp milkweed seeds carrying them to new habitat beneath the puffy cotton-like cumulus clouds drifting in a deep blue sky. The meadow is the kind of peaceful place that might have inspired Thoreau when he wrote these words, “I think I cannot preserve my health and spirits unless I spend four hours a day at least—and it is commonly more than that—sauntering through the woods and fields absolutely free from all worldly engagements.” 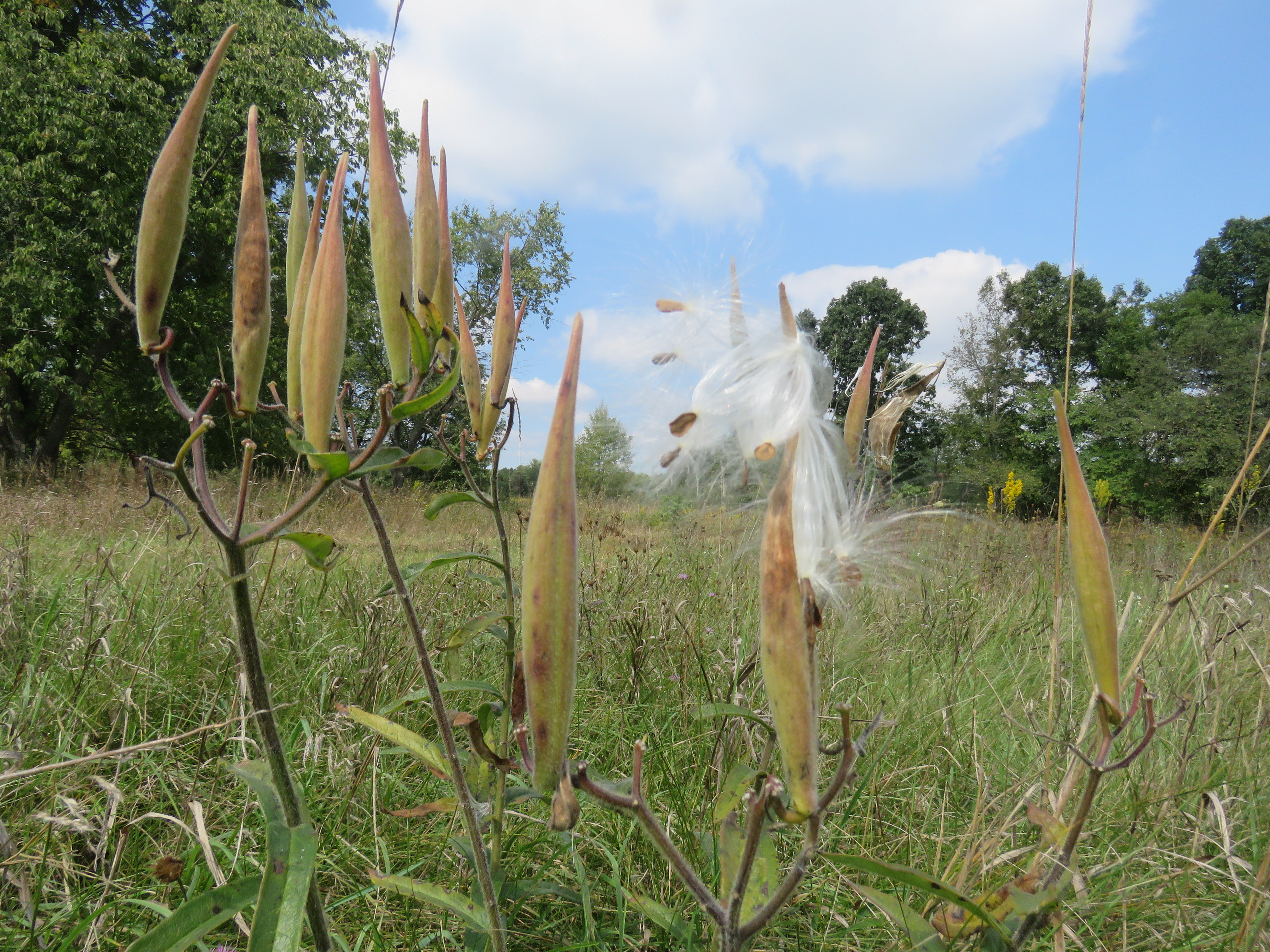