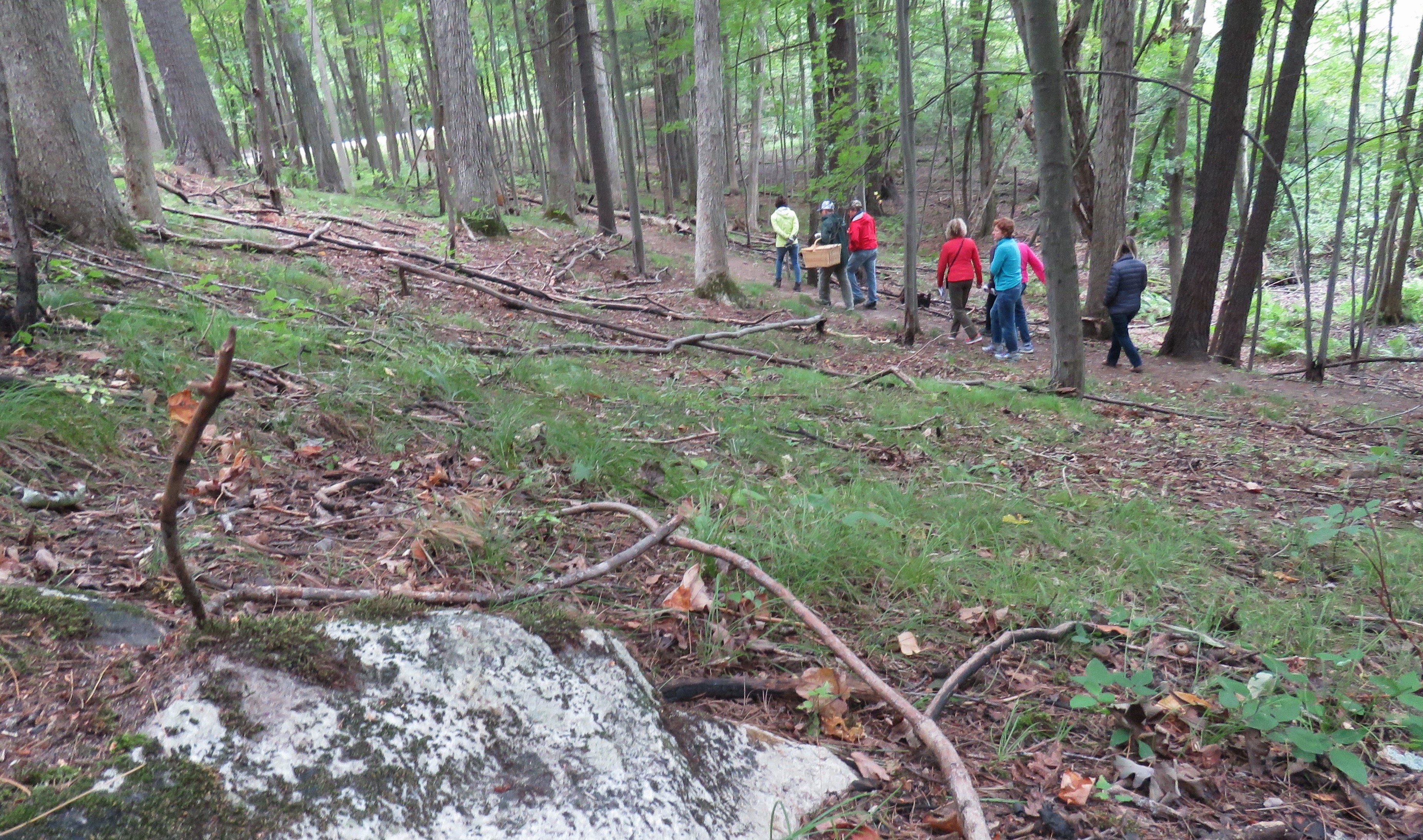 The woodlands of Oakland County are a sensory delight after a rainy September day. The forest floor takes on a richer scent, flowers smell sweeter, fungi flourishes and a very fortune few have chance to sniff chanterelles. The cherished funnel-shaped fungus has a slight apricot-like aroma and is one of the most sought after and delectable mushrooms in these waning days of summer. Searching for chanterelles almost makes me forget about morels, that is until next spring. It was a public program last Sunday morning titled “Fall Mushrooms of Michigan” that lured me back to Lost Lake Nature Park, a 56-acre park administered by Oakland Township Parks and Recreation Commission. I wanted to find a chanterelle. 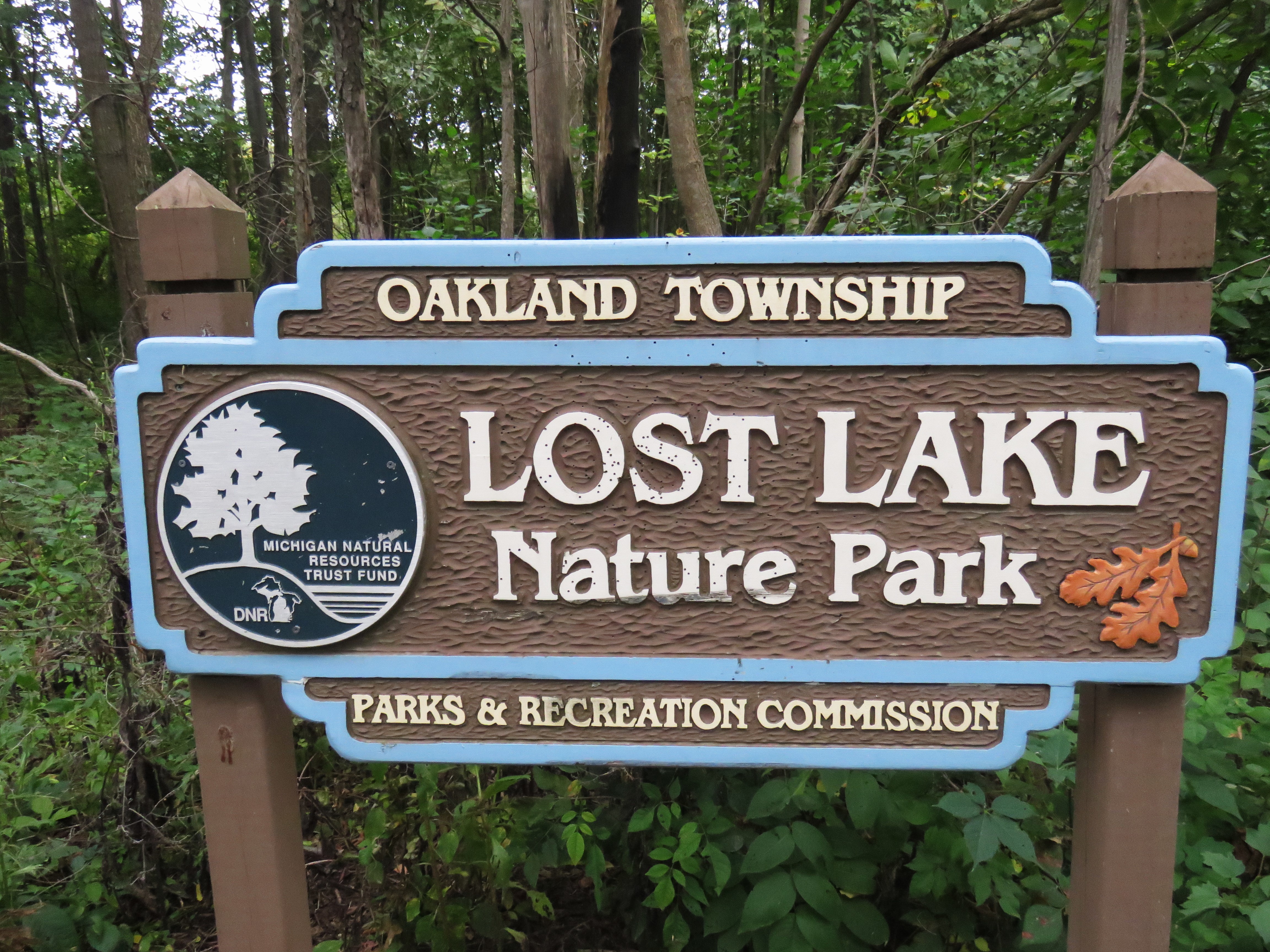 I arrived ninety minutes before the program to explore the wilder side shoreline of Lost Lake, an eight-acre kettle lake created by retreating glaciers some 10,000 years ago. My early morning lakeside greeting party under a cloudy sky consisted of a very vocal Belted Kingfisher diving into the shallows, and high-flying Sandhill Cranes. As I knelt to watch the kingfisher, I noted an assortment of native wildflowers including one of my very favorites of the season, blue lobelia: a late bloomer that lures honey bees and Ruby-throated hummingbirds. A small interpretive sign near the lake and the accessible kayak launch site included this sentence, “This 8-acre ‘kettle’ lake was formed when an isolated block of ice melted and filled a depression, or kettle in which it sat.” Today that small lake is home to numerous amphibians and fish, including bluegill and northern pike, and provides shoreline habitat for two protected reptile species, the eastern massasauga rattlesnake and the Blanding’s turtle.

A lesser known glacier feature was just a few hundred yards away from the kettle lake, the popular winter sled hill which is in reality a “kame.” At 1,040 feet above sea level, it’s one the highest points in Oakland County. A kame is a conically shaped hill created when glacial meltwaters flowed over the surface of a stalled glacier and deposited gravel, sand and other glacial “debris” over the edge and into cracks in the ice creating a knob-like structure. FYI: Pine Knob Ski Resort in Clarkston is our best known county kame. I hiked up the short, but steep trail on the sled side of the kame and then meandered around the more wooded side on a natural surface curved trail following the counters of the land. 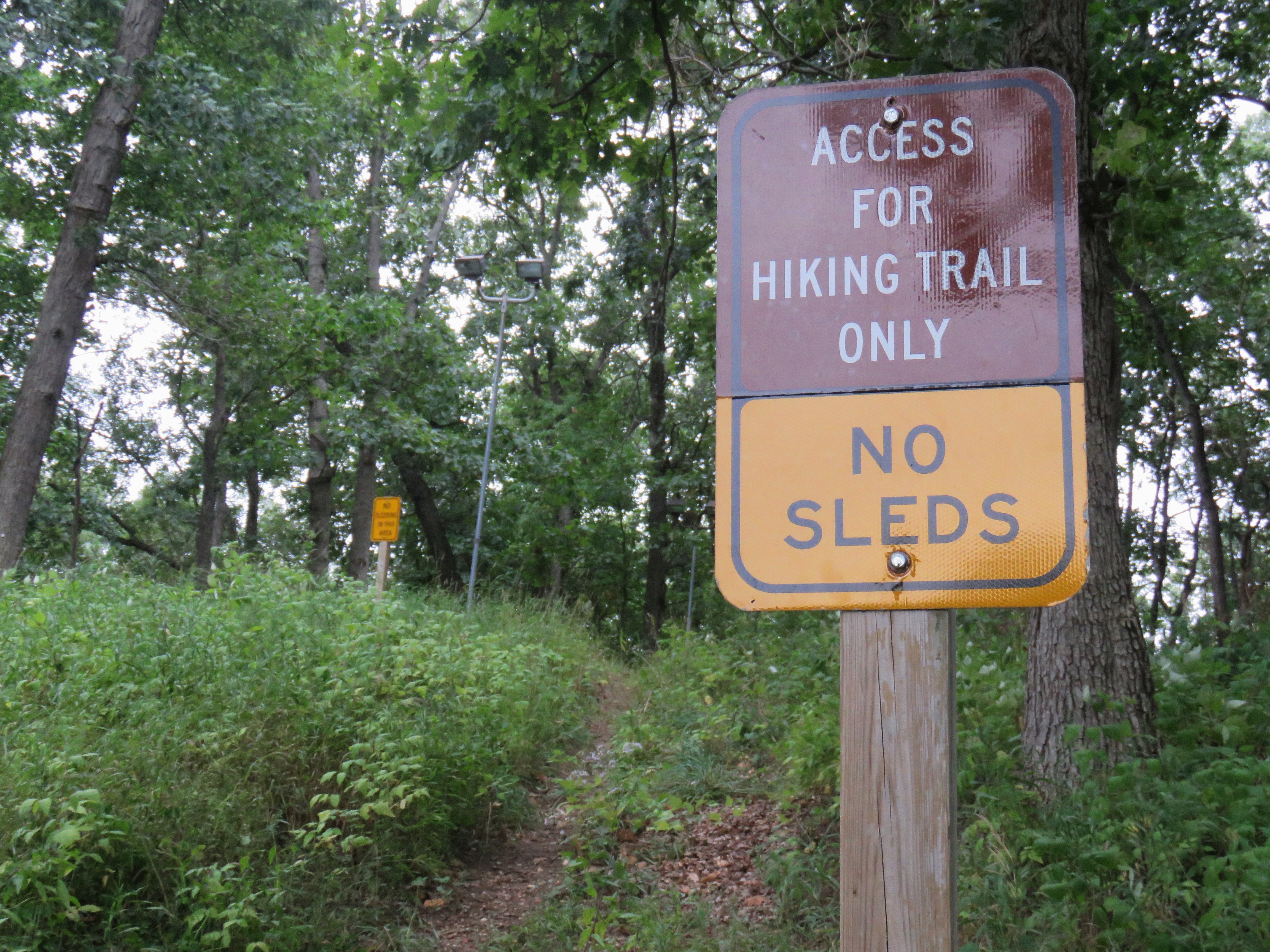 As the time to start the mushroom program drew near, I scurried back towards the small nature center building that overlooks Lost Lake and encountered two signs: one directing visitors to the mushroom program, the other to yoga. Yoga? The yoga sign intrigued me since it pointed to the lake. Perhaps I should not have been surprised to discover participants sprawled out on the dock following the directions of their yoga instructor. I watched their yoga moves for a few minutes before the mushroom program began. 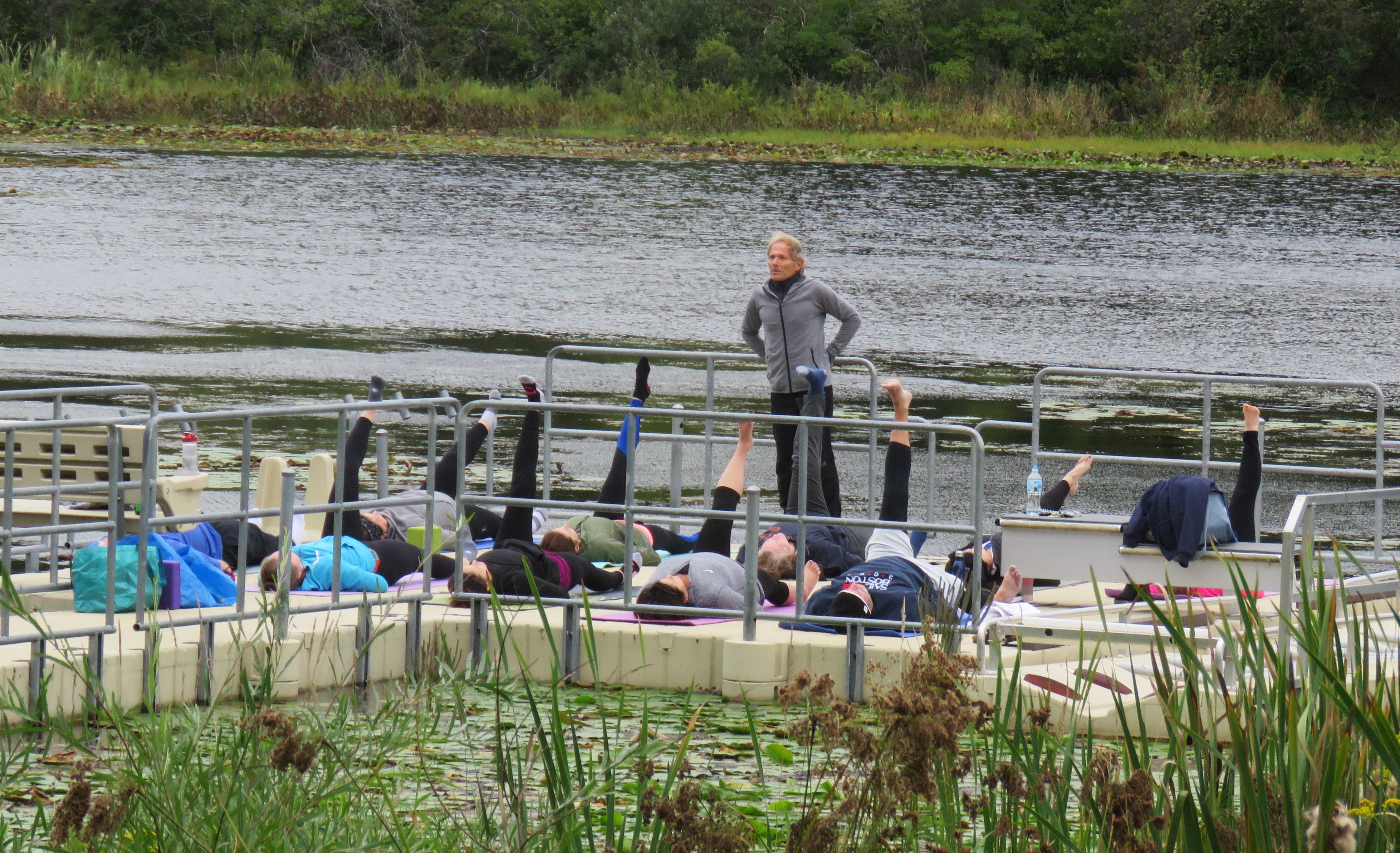 The indoor part of the program started with a short PowerPoint presentation and lively discussion led by Michigan Mushroom Hunters Club president and master forager Phil Tedeschi and his energetic assistant Jerry Watson. I discovered that the Michigan Mushroom Hunters Club was formed to enable people who forage for wild mushrooms to join together to pursue their interests and share their knowledge. Their website has information on the club and upcoming events, some of which are open to the public. With our indoor mushroom hunting warm-up complete, and armed with their printed guide to seasonal mushrooms, we slowly wandered the woods and thanks to the keen eyes and “schroomer’s stoops” of Phil and Jerry, we encountered over a dozen different species of mushrooms, some edible and some not, in the first hour. For those not in the know, the “schroomer’s stoop” is the way a skilled mushroom forager bends over to examine a possible find with the collecting basket in hand. I also noted that when one person stoops, others quickly gather.

I was excited to find a chanterelle, and thanks to the positive ID made by Tedeschi, I knew I was not going to suffer a miserable intestinal misadventure after it sizzled in the frying pan. That delicious fungi of fall has since been consumed, and my confidence in hunting for more has increased. Proper identification of chanterelles is crucial. There are poisonous mushrooms in Oakland County that bear a resemblance to chanterelles, especially the Jack O’ Lantern mushrooms. That is why it’s important to never use a single photo, or blog post (including this one) to positively identify any fungus. And certainly don’t accept your friend’s words that, “I think this one is edible” as a green light to eat. With that said, the fall shrooming season is about to be full speed ahead and I’ll be out scouting my secret sites for my true favorite, Chicken of the Woods. It’s an easy to spot, bright orange-yellow, shelf formation fungus that is usually found on oak trees. I’m one of those novice hunters that looks at Chicken of the Woods as the most magnificent mushroom mother lode, and depending on how it’s prepared, one could say it tastes a bit – well, maybe a tiny bit – like chicken. 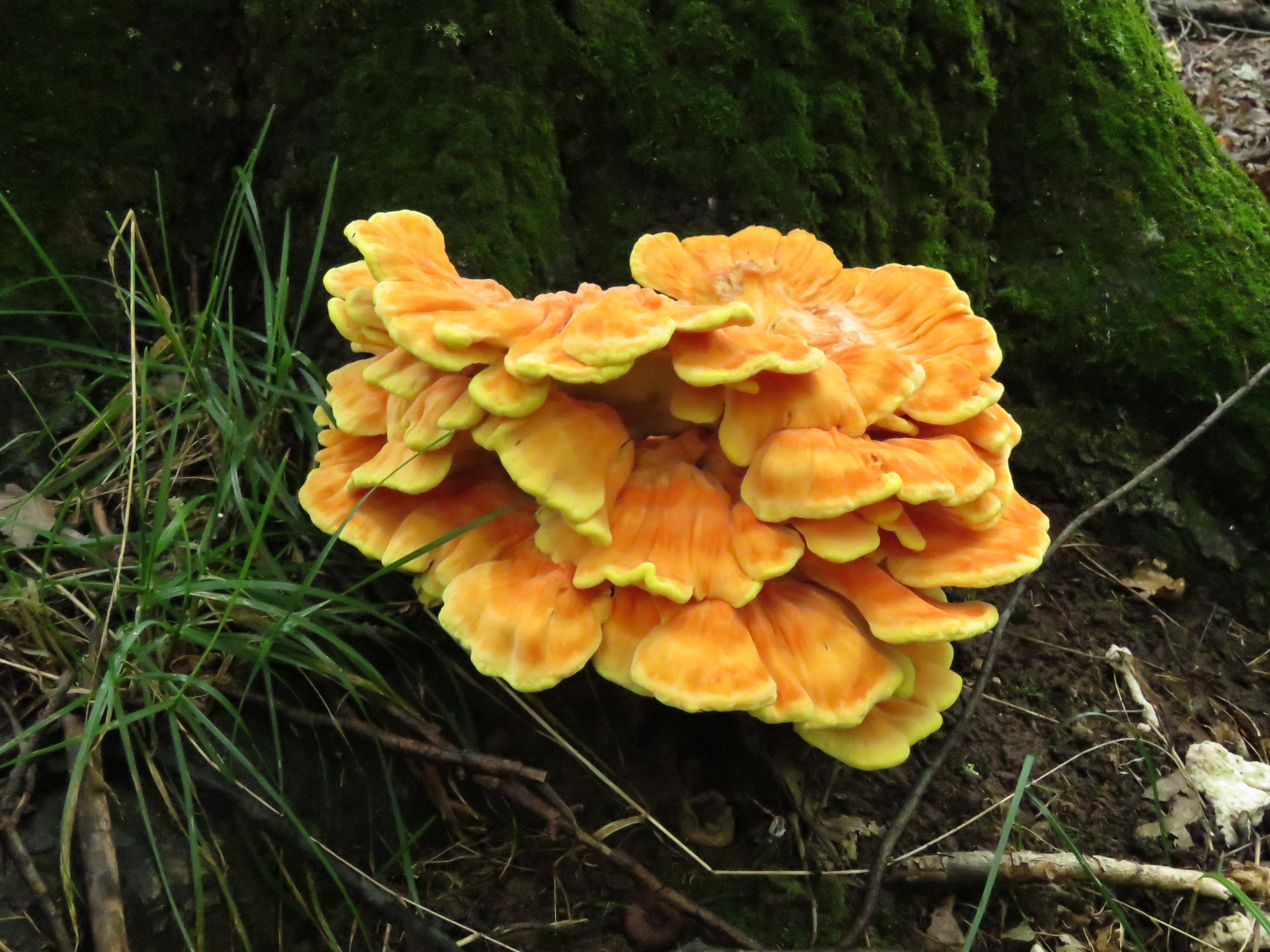 Chicken of the Woods

I encountered a problem I should have expected as most of our mushroom hunting gang focused on the objects of quest: the great variety of late summer fungi. I get distracted easily by all aspects of nature and kept meandering away to explore things I spotted, from acorns dropped by a chipmunk to sassafras leaves that have already turned red. I gathered three red ones to photograph the different shapes of sassafras leaves, especially the famed mitt of Michigan’s shape. Another nature-embracing hiker I encountered earlier gathered three green ones in her hand to photograph the same difference. As others gathered around a tree that had the easily noticeable rectangular feeding holes of a pileated woodpecker, and different species of mushrooms both attached to the tree and flourishing beneath it, I paused to photographer the lower jaw bone of a deer that had been gnawed on by rodents.

I wandered off again on our return trek to the nature center to admire the bright red berries of a withered Jack-in-the-Pulpit, a reminder to me that adventure and diverse discoveries are always found on the wilder side of Oakland County, no matter what the name of the public program may be. Visit the Oakland Township Parks and Recreation website for detailed information on Lost Lake Nature Park and upcoming Oakland Township Parks public programs. 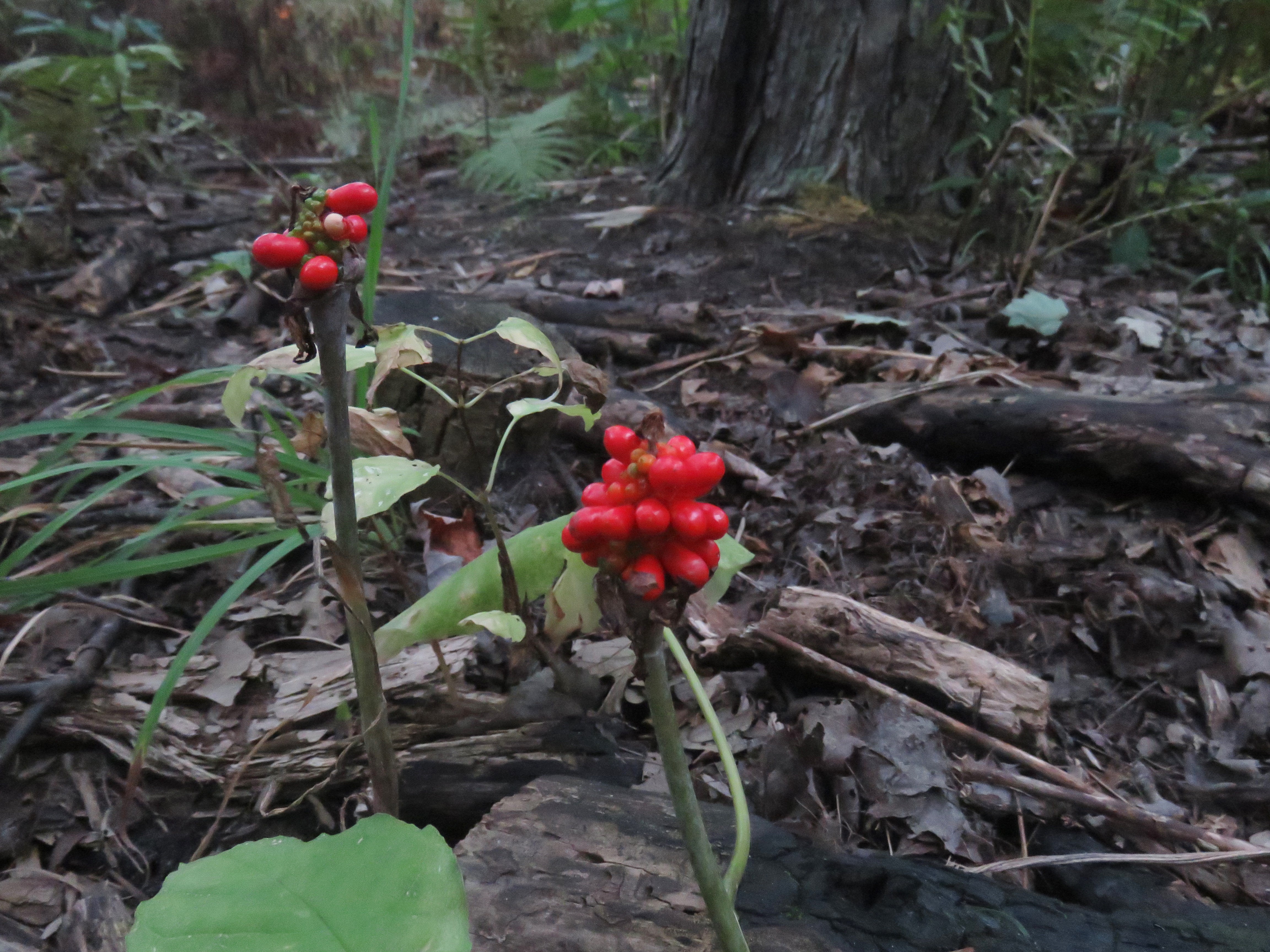