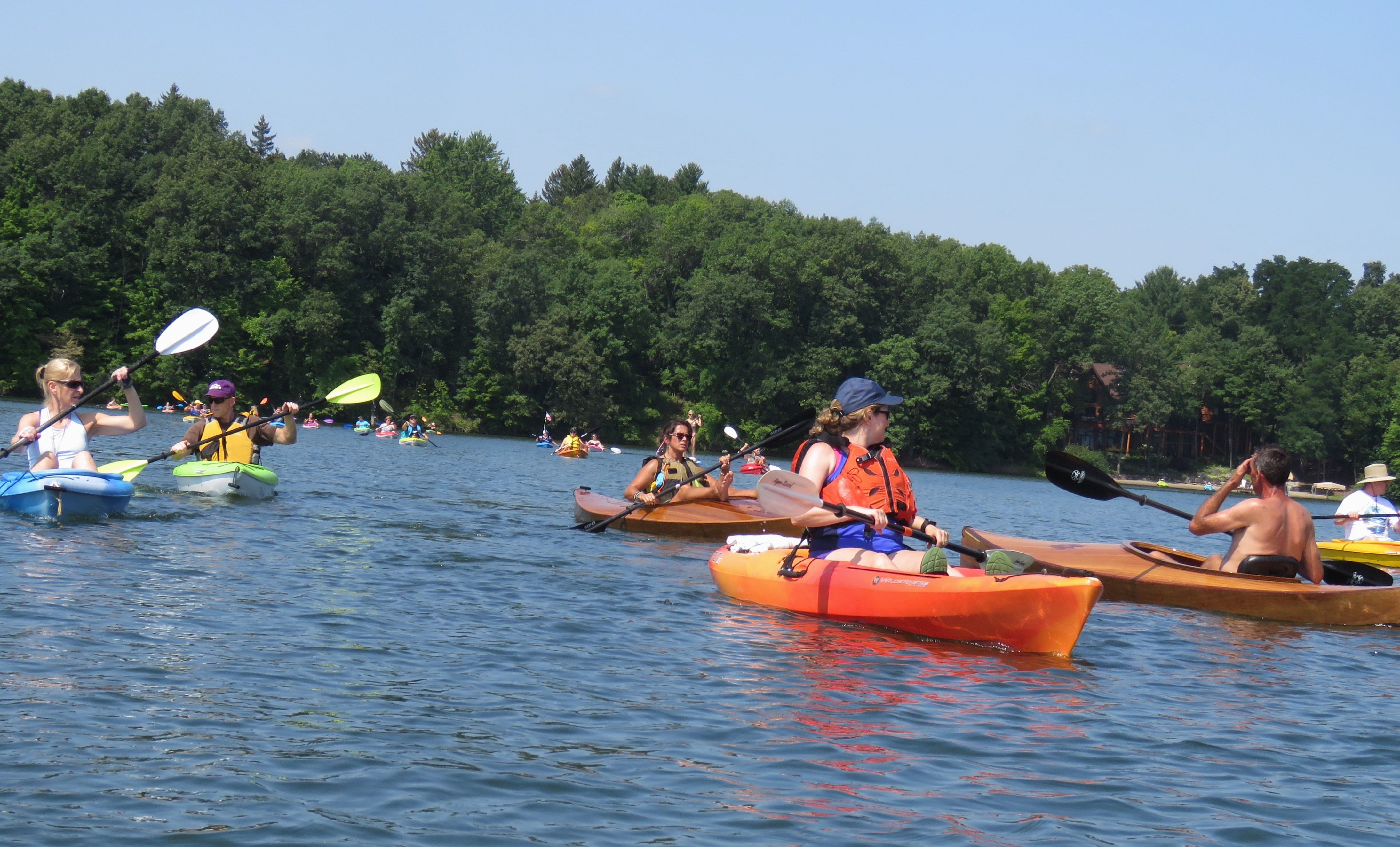 There are many ways to explore the wilder side of Oakland County during the sultry days of summer. Paddling our lakes and meandering rivers is one of the most exciting ways. The ever-changing views, sounds, and scents noted from within a canoe or kayak captures the wildness of nature, and of course it’s a healthful activity as well. I recently had the opportunity to explore a paddling location that was new to me, at a later time of day than I normally paddle. Today’s adventuresome and rather fun tale from the wilder side of Oakland County shares details from that exploration and starts with an introduction to Slow Row LO. 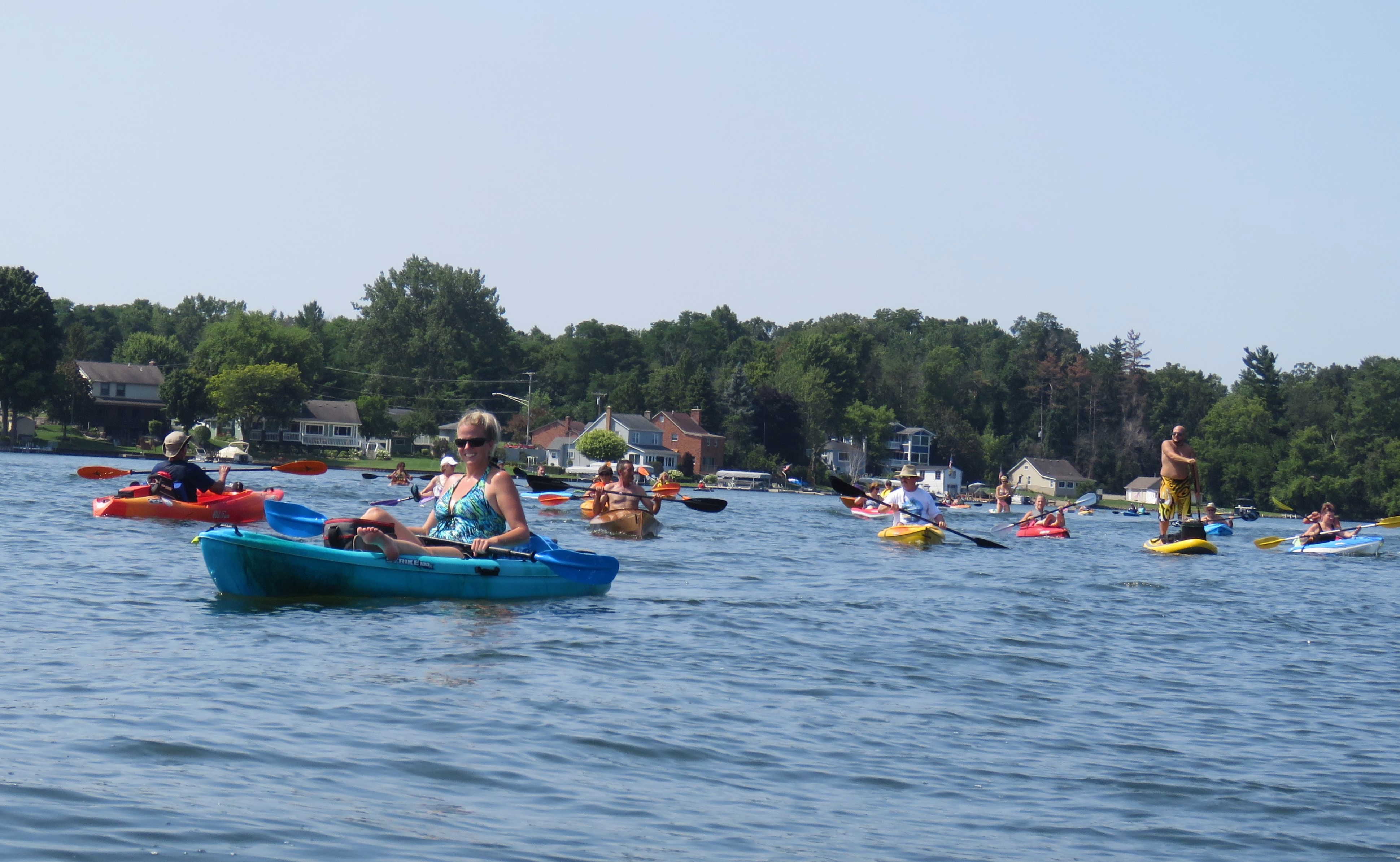 The LO stands for Lake Orion, and Slow Row LO is a Village of Lake Orion based paddling group that was created late in the summer of 2016 by Orion Township Supervisor Chris Barnett. Using Facebook events, Barnett invited residents of the township to kayak the lakes in the local community. In 2017, the paddling group expanded to explore other lakes in Northern Oakland County. Slow Row LO is managed by Michele Arquette-Palermo, an Orion Township resident and a member of their Parks and Recreation Advisory Committee. She is also the head of the Freshwater Forum at Cranbrook Institute of Science and according to Michele, “As an advocate of our freshwater, Slow Row LO is a great way to get people out on the water, experience its beauty, understand its vulnerability, and become champions and stewards of our lakes, river and streams.” She added, “Slow Row LO is open to paddlers of all ages and skill levels. Added this year was a partnership with Simple Adventures who provides rentals for all of the Slow Row events. To join Slow Row LO, visit them on Facebook at www.facebook.com/SlowrowLO.” I decided to explore Lakeville Lake with Slow Row LO two weeks ago and had more than a few surprises. Here’s what happened! 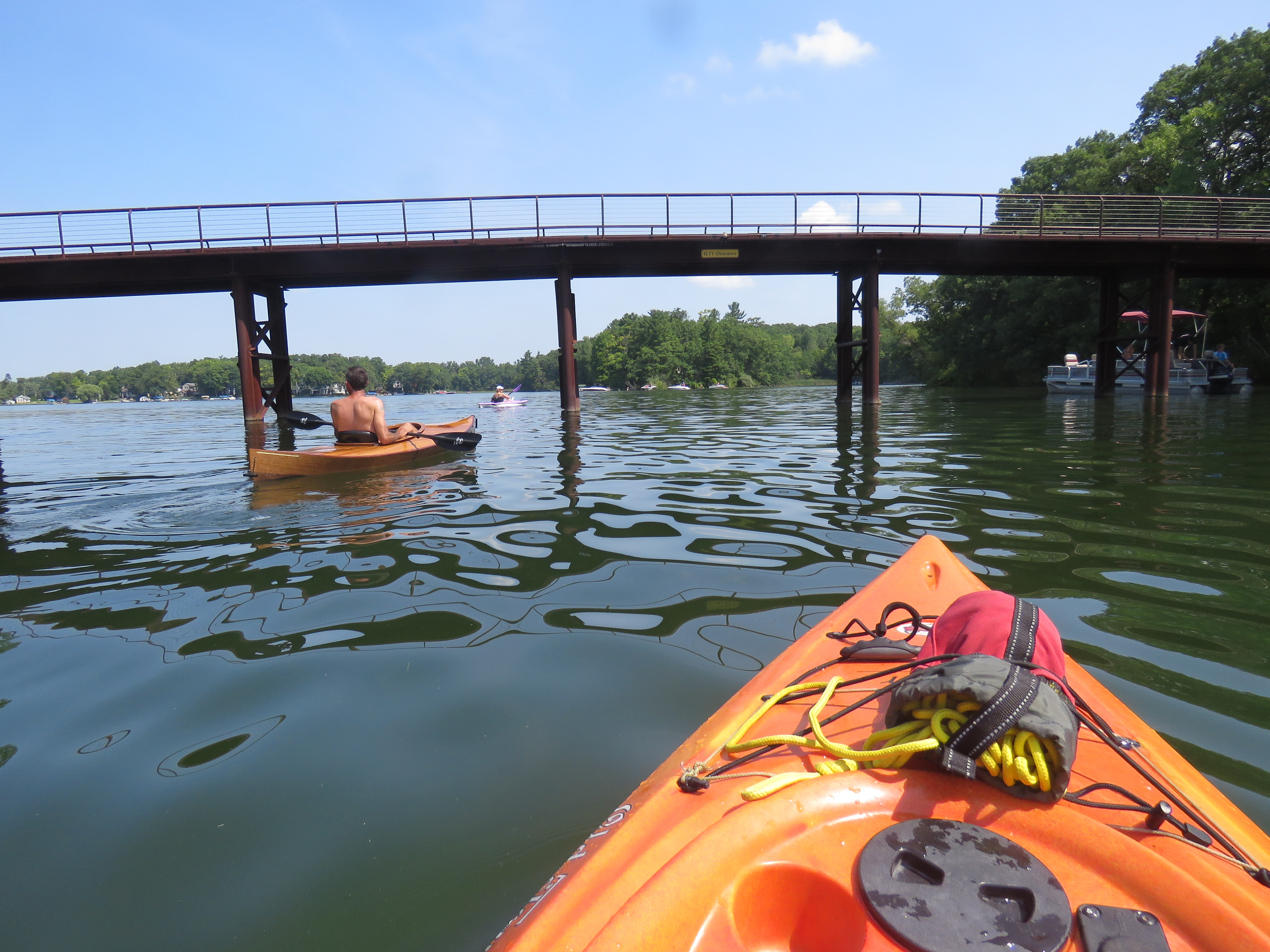 I noticed the start time for the Lakeville Lake paddle was listed at 11:00 a.m. and we were to meet at the DNR Boat launch on the north side of Lakeville Road just a bit west of Rochester Road. An eleven o’clock start time surprised me, for when I paddle I try to be in the water shortly after sunrise when wildlife is moving and most folks are sleeping. Their start time intrigued me, especially knowing that Lakeville Lake is hardly a secret and the boat launch is a busy place on summery days. With those thoughts in mind I decided to arrive early to explore and chat with the DNR personnel stationed at the boat launch. I arrived at 10:40 a.m. and was met with a chain across the gate and a sign that proclaimed, LOT FULL. About a dozen Slow Row folks and perhaps a half-dozen power boaters were also on the road side of the gate and scurried about like disturbed ants wondering what to do next. The extremely busy DNR attendant was polite and explained the obvious; there were no places left to park vehicles. That I understood. 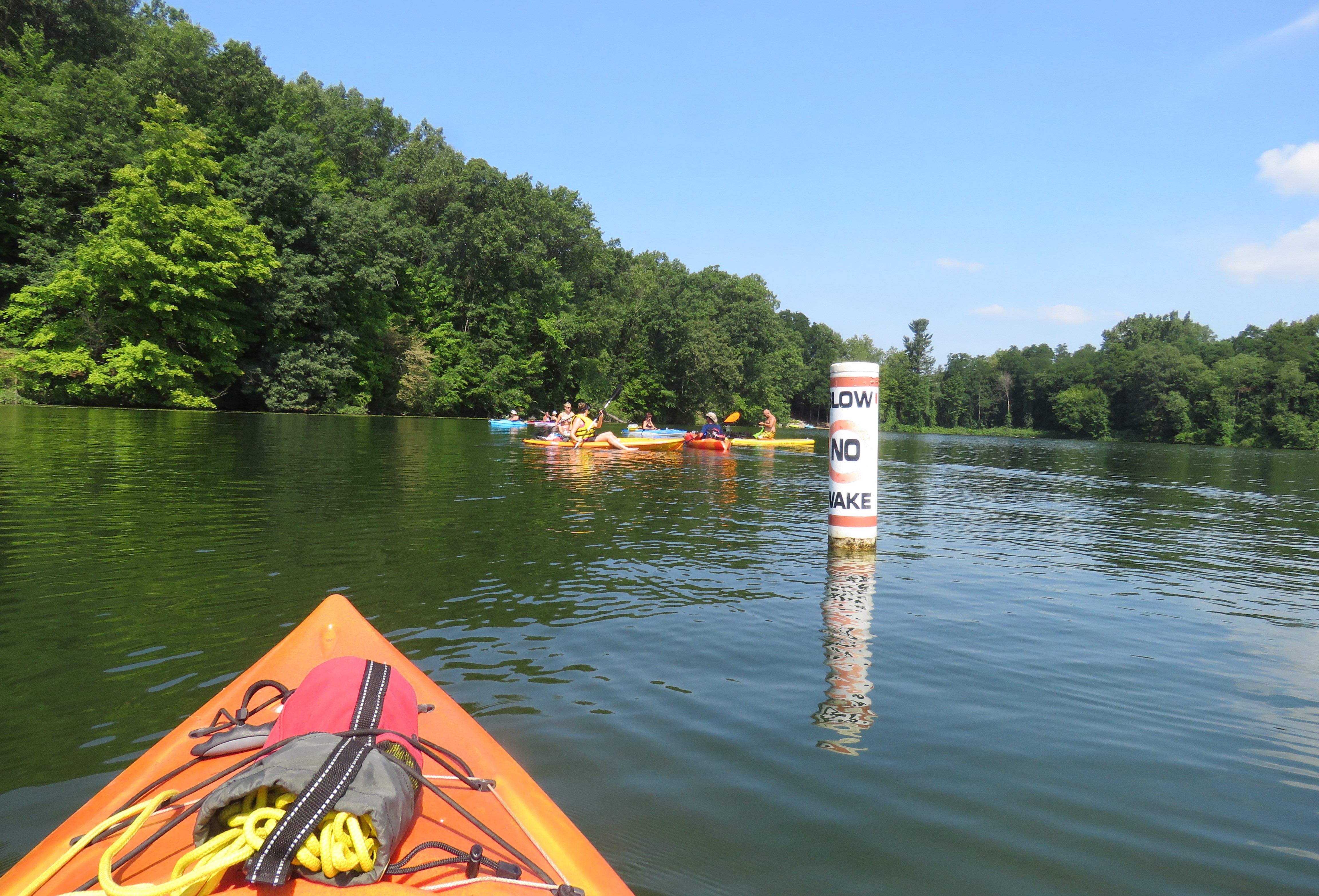 I was not about to go home. Instead I drove less than a quarter of a mile east to Louie’s Food and Spirits at 600 Lakeville Road, a casual restaurant that is very outdoor recreationist friendly. I became acquainted with the roadside eatery several times before when participating in the Addison Oaks Trail Riders’ annual autumn Camp and Ride Equestrian Weekend at nearby Addison Oaks County Park. How friendly is Louie’s? Friendly enough to let equestrians secure their horses in the edge of their parking lot so the riders could have breakfast. With those thoughts in mind, I quickly explained my dilemma to the hostess and was granted permission to leave my car in their lot. I promised to come eat afterwards.

I thanked the staff and raced back to the DNR site, off loaded my kayak on the shoulder of the road, and then drove back to Louie’s to park my car before hurrying back on foot to join the Slow Row gang which had by then swollen to 39 people, with many of them rushing around to find places to park in the tiny Village of Lakeville. I later learned that a total of 48 folks attended that not so quite Slow Row paddle. 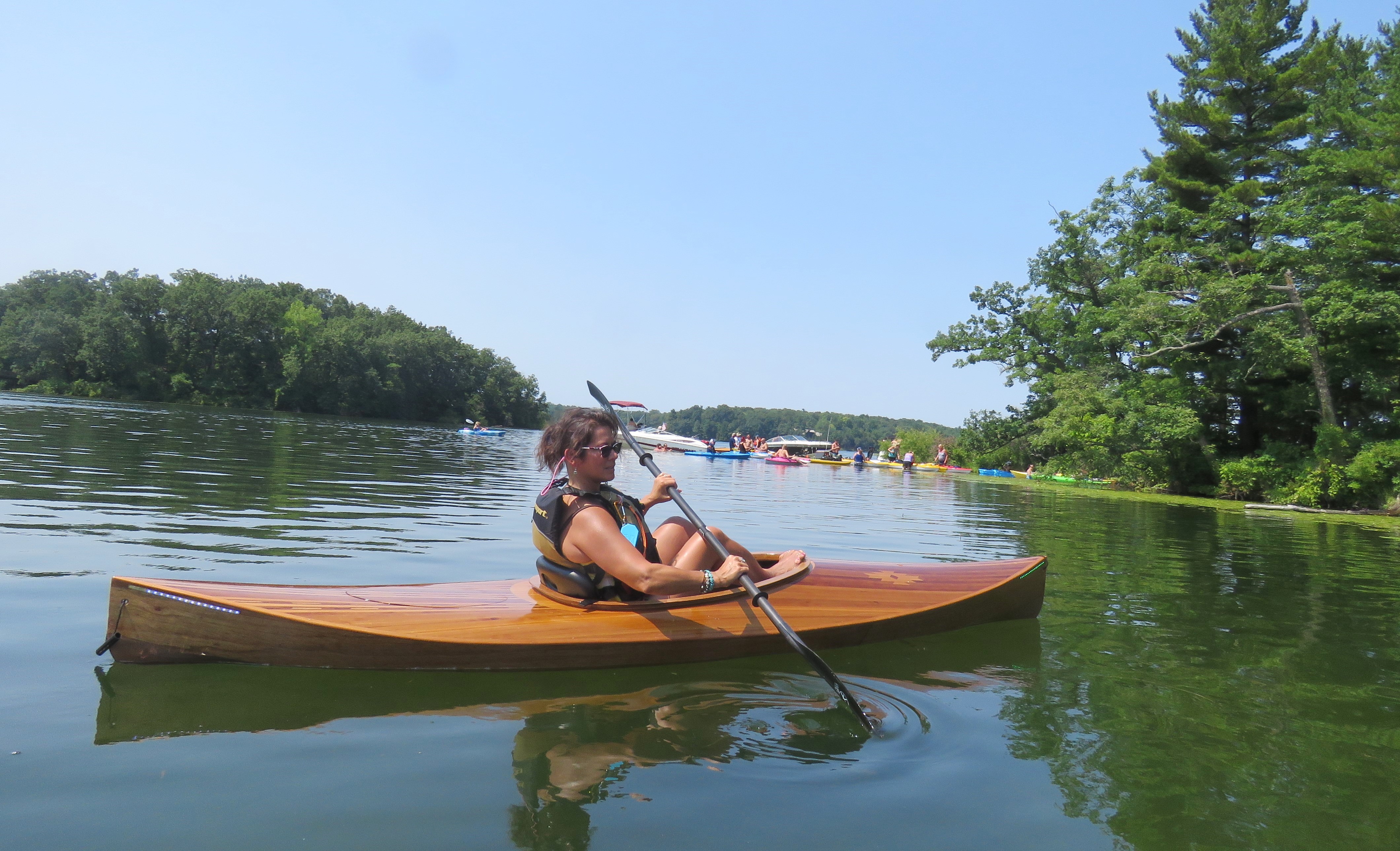 Lakeville Lake is an “all-sports” lake with a well-known Department of Natural Resources public launch site and at 460 acres, it is the second largest public recreational facility in Addison Township. Nearby Addison Oaks County Park at 1,140 acres is the largest. The depth of the lake varies between 5 and 15 feet, but fishermen can also thank the glaciers for several deep holes in the sixty foot mark. Although much of the shoreline and several of the small islands have palatial homes, sections of the shoreline remain heavily wooded and numerous coves have natural vegetation that attracts finned, furry and winged creatures.

Situational awareness while paddling is a necessity, but I obediently followed the leader of our colorful flotilla as we crossed a wide open section, with my eyes occasionally going to the two beautifully crafted wooden kayaks in our midst. I always kept a watchful eye on speed boats pulling water skiers and tubes and was pleased to see the Marine Division of the Oakland County Sheriff’s Office on patrol, thankfully keeping some resemblance of calm on the lake and I suspect refreshing the memory of those that did not practice safety and common sense.

The Slow Row destination was “the sandbar,” something of an unofficial boater’s hangout near a small cove – there are many small coves on the lake — where folks chatted, waded in the shallows and enjoyed their refreshments. Solitude was not to be found there, but then the big surprise came, an eagle did not seem to care. A majestic American Bald Eagle swooped down, grabbed a fish and with powerful wing beats continued on its way flying perhaps 100 feet in front of me. That totally unexpected encounter was the perfect reminder that nature is where you find it. Encouraged by the eagle, I paddled away from most of the group and joined a few others in exploring a nature-rich corner of a more secluded cove. Dragonflies, damselflies and a green heron near the fragrant water lilies (Nymphaea odorata) joined our respite away from the crowd.

An hour later, I abandoned the boisterous group and paddled along the shoreline heading back to the boat launch and a very late excellent lunch at Louie’s. Eleven o’clock a.m. turned out to be an interesting time for an outdoor adventure and I’m grateful for my exploration with the Slow Row LO group, especially after the astonishing appearance of the bald eagle. Sunrise, in just the accompaniment of a friend or two, is still my favorite time for a peaceful paddle about Oakland County to explore nature on her own terms, but any time you get the chance to explore nature’s way is a good time. 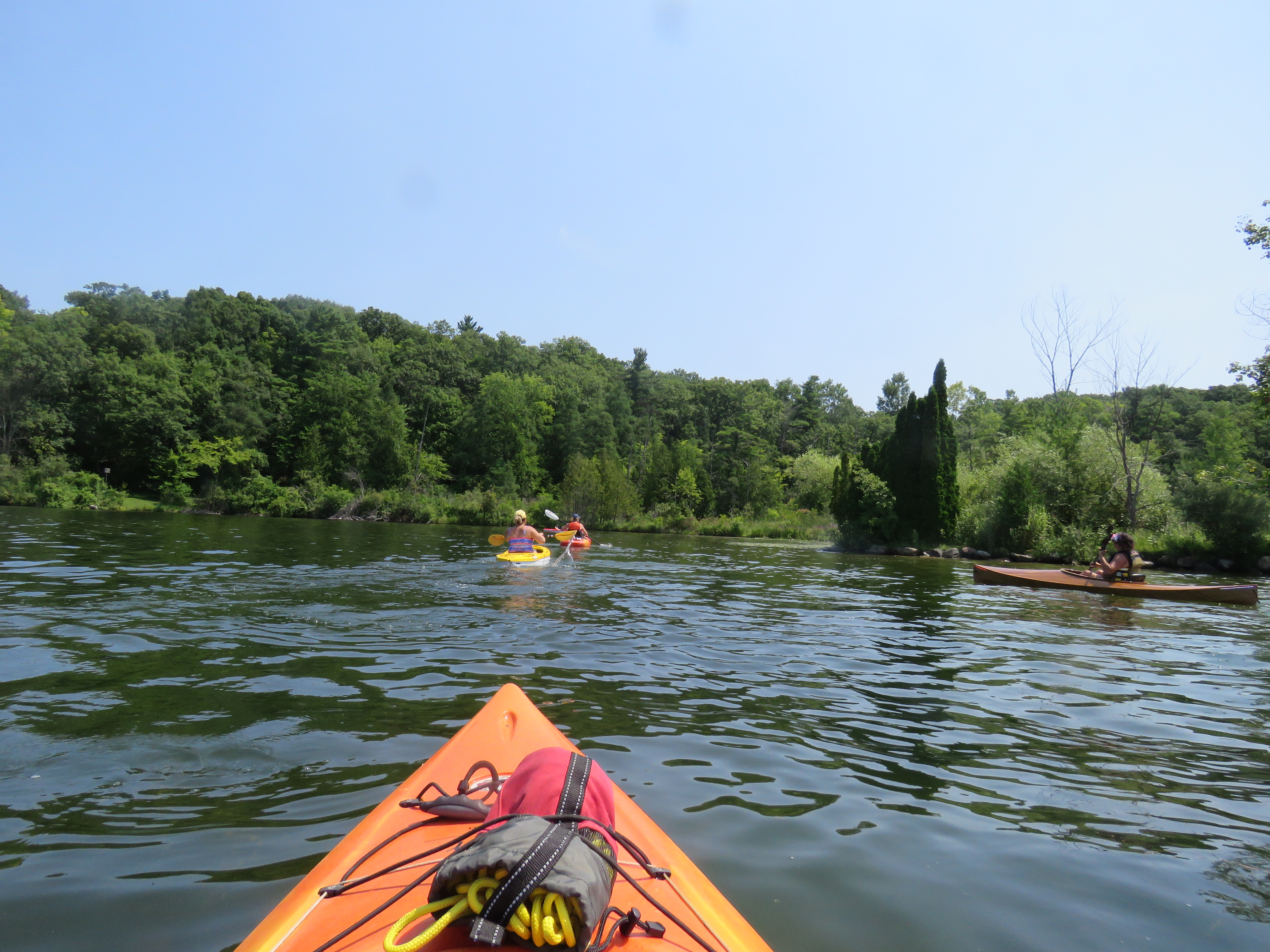 One thought on ““Slow Row LO” Adventuring on Lakeville Lake”