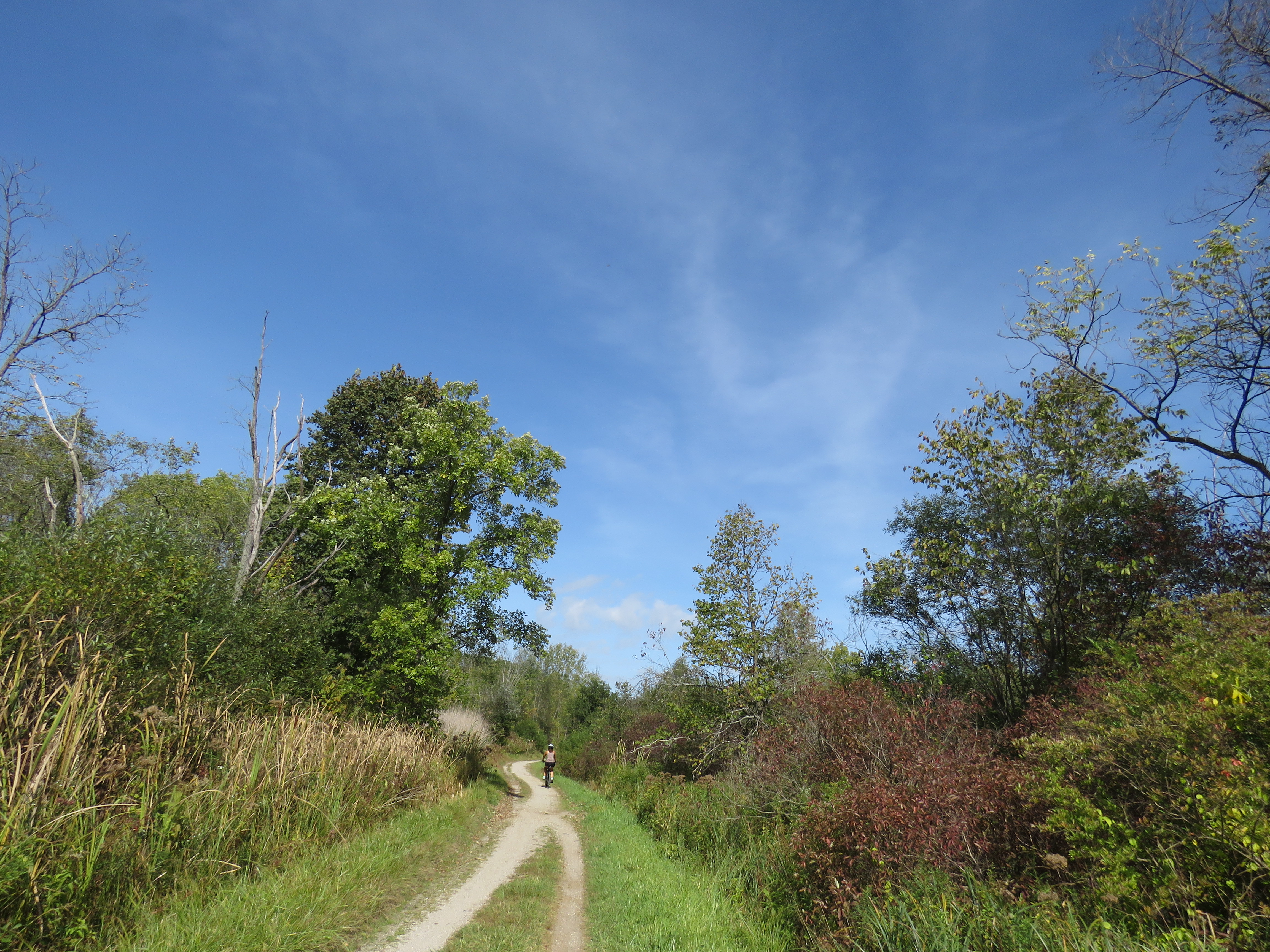 Stony Creek Metropark extends from easternmost Oakland County well into Macomb County and entices hundreds of visitors on crisp autumn days. Some come for birding with hopes of seeing the resident Bald Eagles, others visit the nature center, while many just come to hike the trails, fish, or take photos of colorful leaves. Others have a late season picnic, or just jog, walk or bike around the scenic 6.1-mile paved trial that circles Stony Lake. The Stony Creek Metropark brochure, which may be viewed online, or acquired at the entrance contact station makes mention of the “heart pounding excitement of riding miles of mountain bike trails.” I tended to always ignore those words, but that is where this true life confession Wilder Side of Oakland County trail tale really begins.

I own a crossover bike that technically functions as a mountain bike. Great tires, good handlebars, suspension shocks and other cool features including a whole bunch of gears I rarely use. It set me back quite a bit when I purchased it on a whim almost three years ago. Up until a few days ago, I had biked mostly on local lesser traveled county roads, and the totally fun, ever popular Polly Ann, Clinton River and Paint Creek Trails. I was just never really attracted to the possibility of the “heart pounding” mountain biking excitement promoted by Stony Creek, which in my mind might be rapidly followed in quick succession by a fractured femur, shattered shoulder and after a few more life-altering seconds of rolling rapidly downhill over rough rocks, being impaled on a jagged, beaver-chewed tree stump at the edge of a swamp. I think I would rather wrestle a rabid grizzly bear, or repeat my worst ever mind-numbing nightmare: high school algebra. 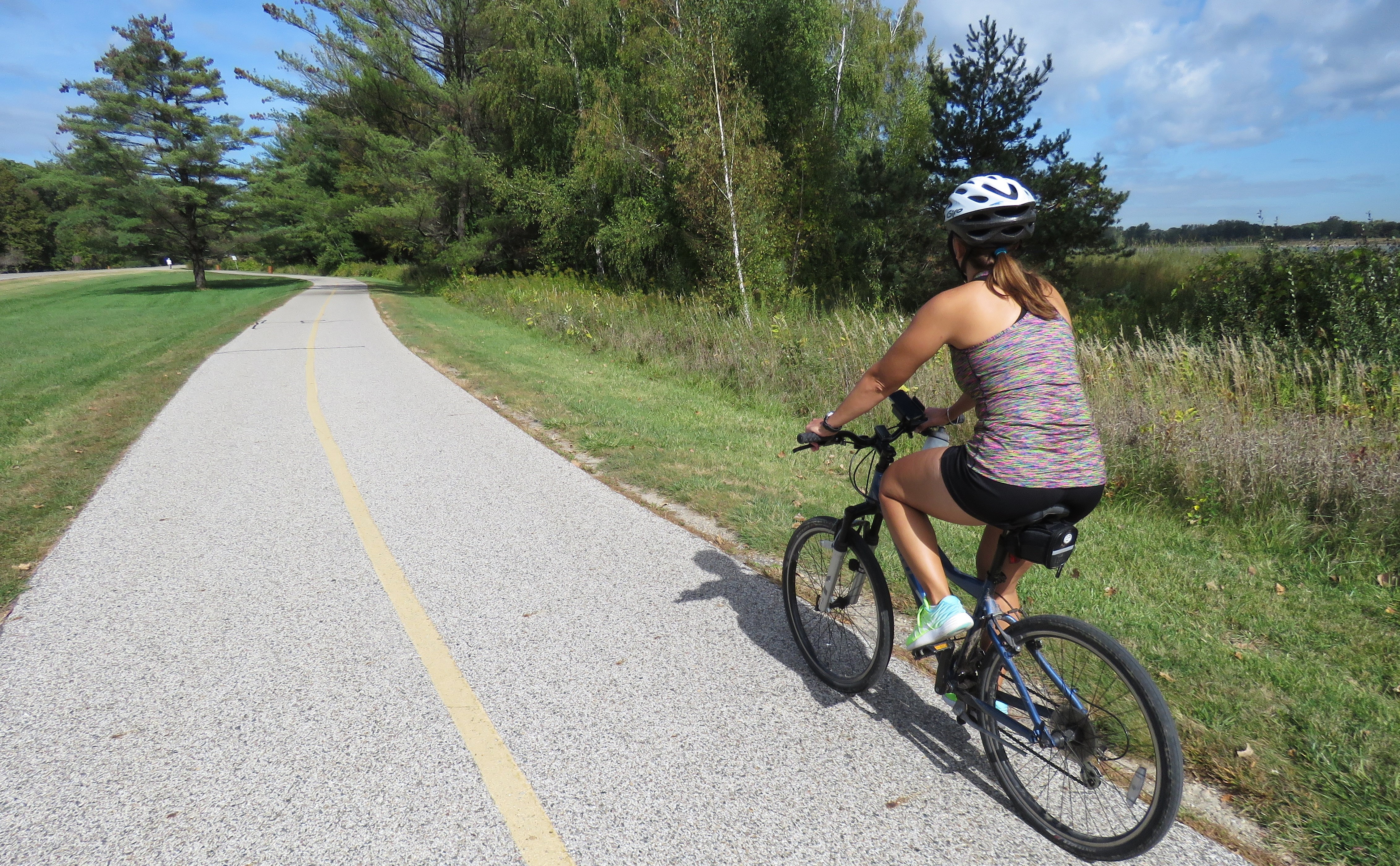 But I had witnessed others coming off those mountain bike trails, and strangely they were smiling. None were limping or even appeared bruised. They looked happy, and happy is a good thing. Perhaps it was time for me to overcome my mountain bike trail anxiety, and so after much thought and verbal prodding from two friends that frequent those trails I decided October was time for me to face my fears and conquer that “single-track” mountain bike trail that meanders like a giant serpent on steroids through the wilder side of 4,461-acre Stony Creek Metropark. The meeting date and time was set. I was about to go mountain biking.

However before heading out I thought it best to find out what single-track meant, for at least I wanted to give my friends the impression I knew what I was doing. Wikipedia defines it this way, “Singletrack (or single track) describes a type of mountain biking trail that is approximately the width of the bike. It contrasts with double-track or fire road which is wide enough for four-wheeled off-road vehicles. It is often smooth and flowing, but may also feature technical rocky sections, go over tree roots, and include berms, banked turns, switch-backs, hills, drops, jumps, and so forth” 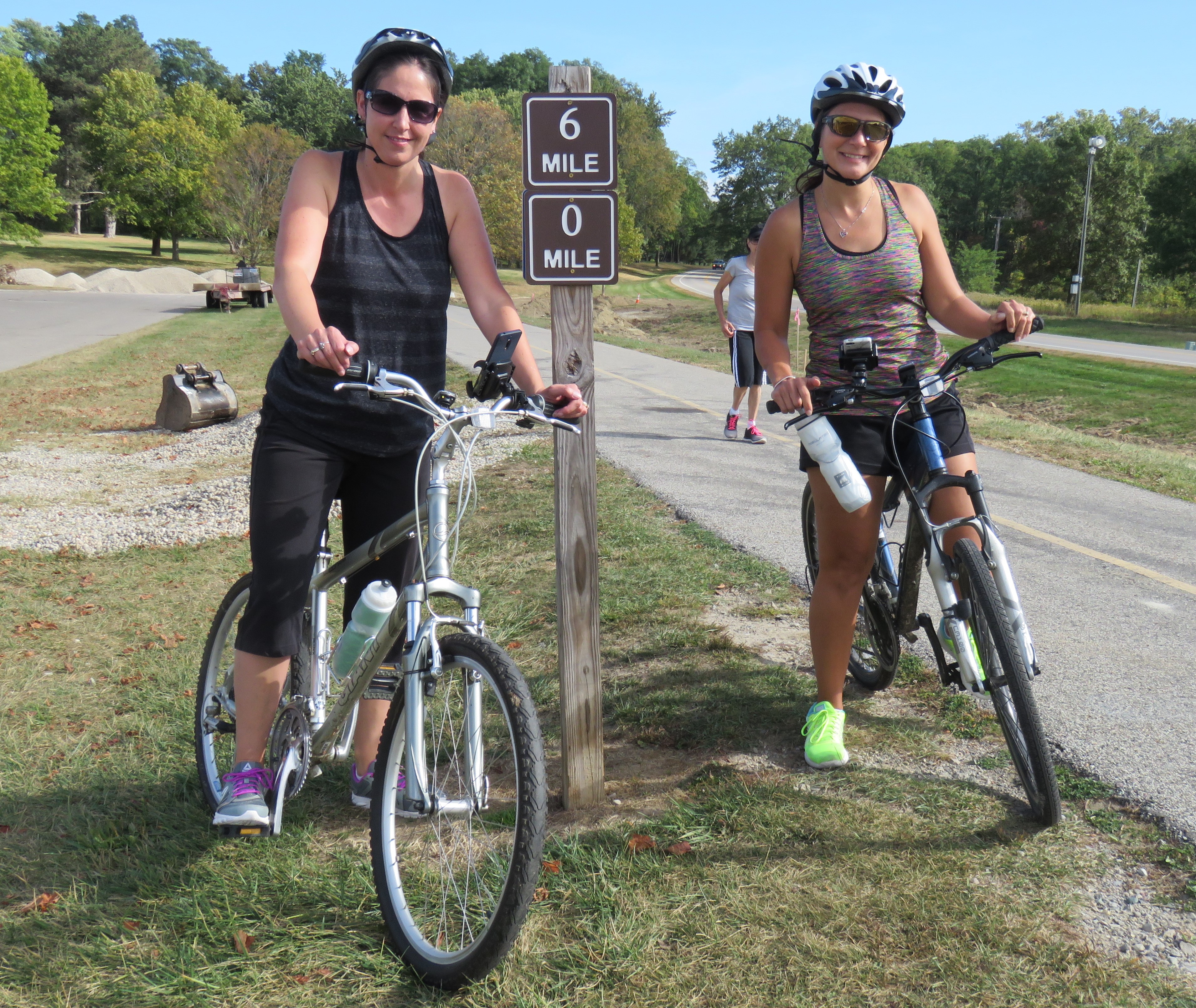 I was not the least bit clear on what “so forth” meant but I was prepared for anything. I had my helmet, biking gloves and my small first aid kit that goes with me on all back country adventure. The kit includes a “CAT”, known by military and wilderness medical professionals as the Combat Application Tourniquet. It can be applied one-handed. I was ready in case I severed an artery from smashing into a tree or another mountain biker. My backup, in case things did not go well, were my two mountain biking friends, Michelle Brittain and Michelle Gamble. They both are experienced Intensive Care Nurses at St John Macomb-Oakland Hospital in Madison Heights. They promised they would save my life, or at least try to if I had a serious wipe out. With those assurances in mind, it was time to peddle away from our meeting location at the Stony Lake boat launch parking lot for our “warm up” six-mile bike ride around Stony Lake before the single-track adventure began.

We zipped along clockwise under a clear blue sky to the accompaniment of the inflight music of Canada Geese, Sandhill Cranes and restless Black-Capped Chickadees in trailside shrubs. A Michigan Historical Site trailside interpretive sign enriched me on history going back to 1824. Even though leaves had barely started to turn, signs of autumn were everywhere and outdoor recreationalists were out and about. A lone kayaker launched her craft with her dog trying to help, frogs hopped, turtles sunned, folks sat on benches, moms and kids gathered at a play structure, flocks of waterfowl floated in a bay, milkweed seeds took flight in gentle puffs of wind and a pair of Sandhill Cranes hunted insects in the greens of the Stony Creek golf course.

After finishing our lake circling, and two extra miles for good measure, it was time for about five miles on a two-track, an unplanned transition before it was single-track time. Perhaps “the medical Michelles” wanted to break me into the sport slowly. I insisted however we look at the posted map near one of the trailheads first, and happily discovered they also double as cross-country ski trails. I nodded towards the Metropark Police that drove by the trailhead, instead of running to them for help, and then we were off.

The two-track section turned out to be easy and spectacular, and I would rate it as family friendly for cyclists with a bit of experience. Gently rolling terrain, with plenty of room to peddle under a clear blue sky through gently rolling glacially sculpted terrain set me at ease. The words “two-track” no longer frightened me, the trail was wide enough for a vehicle. We paused at a trailside bench giving me time to explore a field of big bluestem, a native prairie grass that towered over my head. I was happy to realize that if a fall occurred on the two-track it would be a simple fall, nothing to complicate the chances of my survival like a steep drop off a cliff, big boulders to smash my bones or bike snagging single-track branches to send me spinning about to my demise. Those possibilities were just minutes away. I even had the opportunity to switch into my nature education mode and share knowledge on wild fall edibles, including autumn olive and wild carrots. 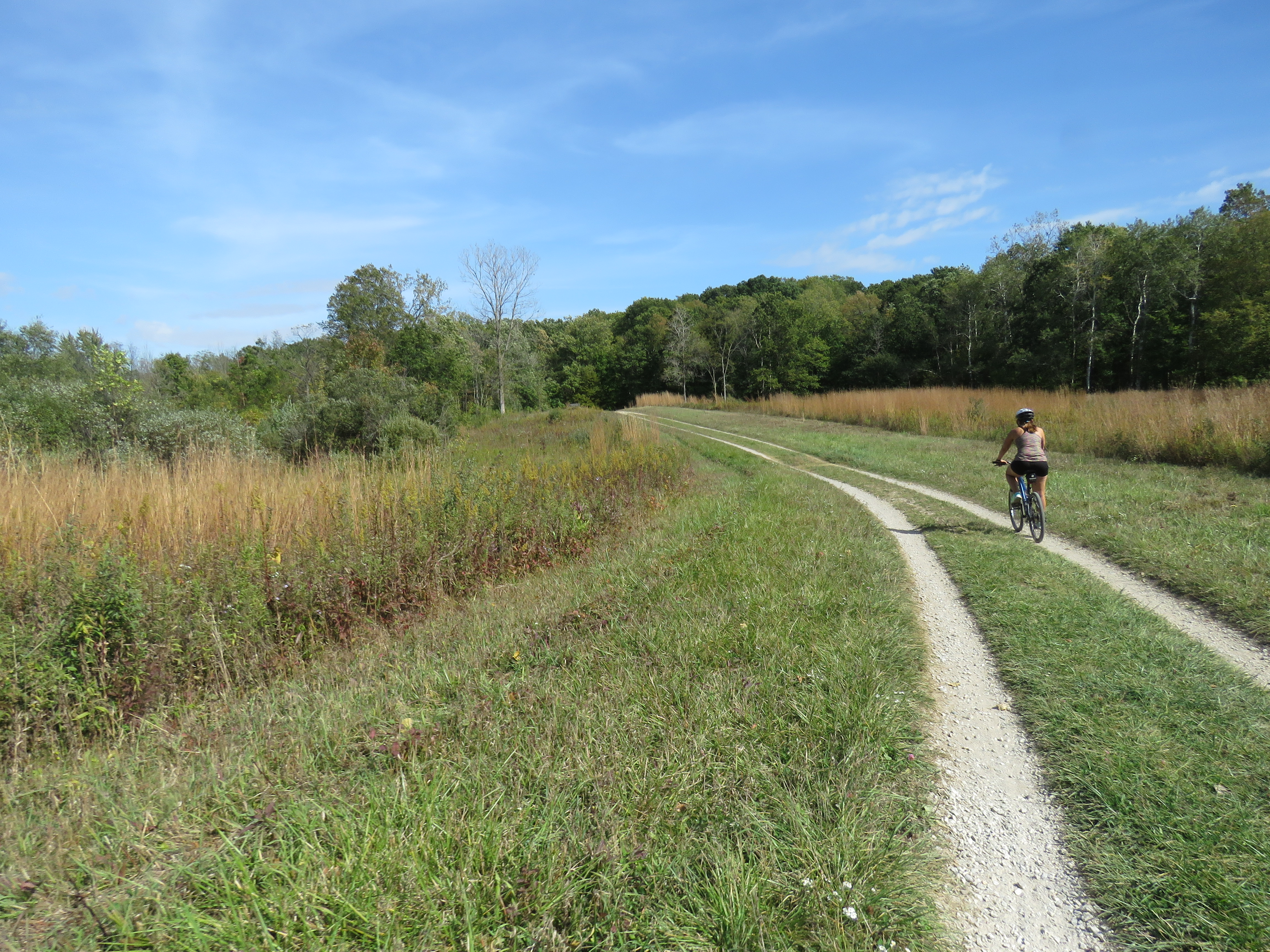 The time had come. Michelle Brittain looked at a trailside sign map, and with an expression that seemed to warn me not to dare back down said, “It’s single-track time. This is where we go in, at the pines.” I could feel my voice trying not to quiver and simply said, “Lead on” knowing my demise was just moments away and fire-rescue would be carrying me out on a stretcher and friends might see me on the evening news. The first minute or so was fine, just a narrow, almost level meandering path through a cascade of falling white pine needles. It was actually kind of fun. A Blue Jay took flight and screamed a protest at our intrusion. I took his call to mean, “Lookout! Lookout! A frightened beginner is coming!”

Two minutes slipped by and I was still alive but clinging onto my handlebars so hard my hands almost hurt as I navigated downhill twist and turns. Five minutes later I was almost enjoying myself as another descent began, but this time I was relaxed enough to point out shagbark hickory trees and the tunneling marks of Emerald Ash Borers that have killed most of the ash trees in our county. I noted that Michelle Brittain, who maintained the lead, stayed out of my way, but glanced back every now and then to be sure I was still peddling and alive. She was in the ICU nurse mode. Then a sign appeared that gave two trail choices: “DANGER” or “EASY”. I made my choice and remained upright and wondered why anyone would peddle over brain scrambling rocks on the danger route. I took the easy bypath. So did they. 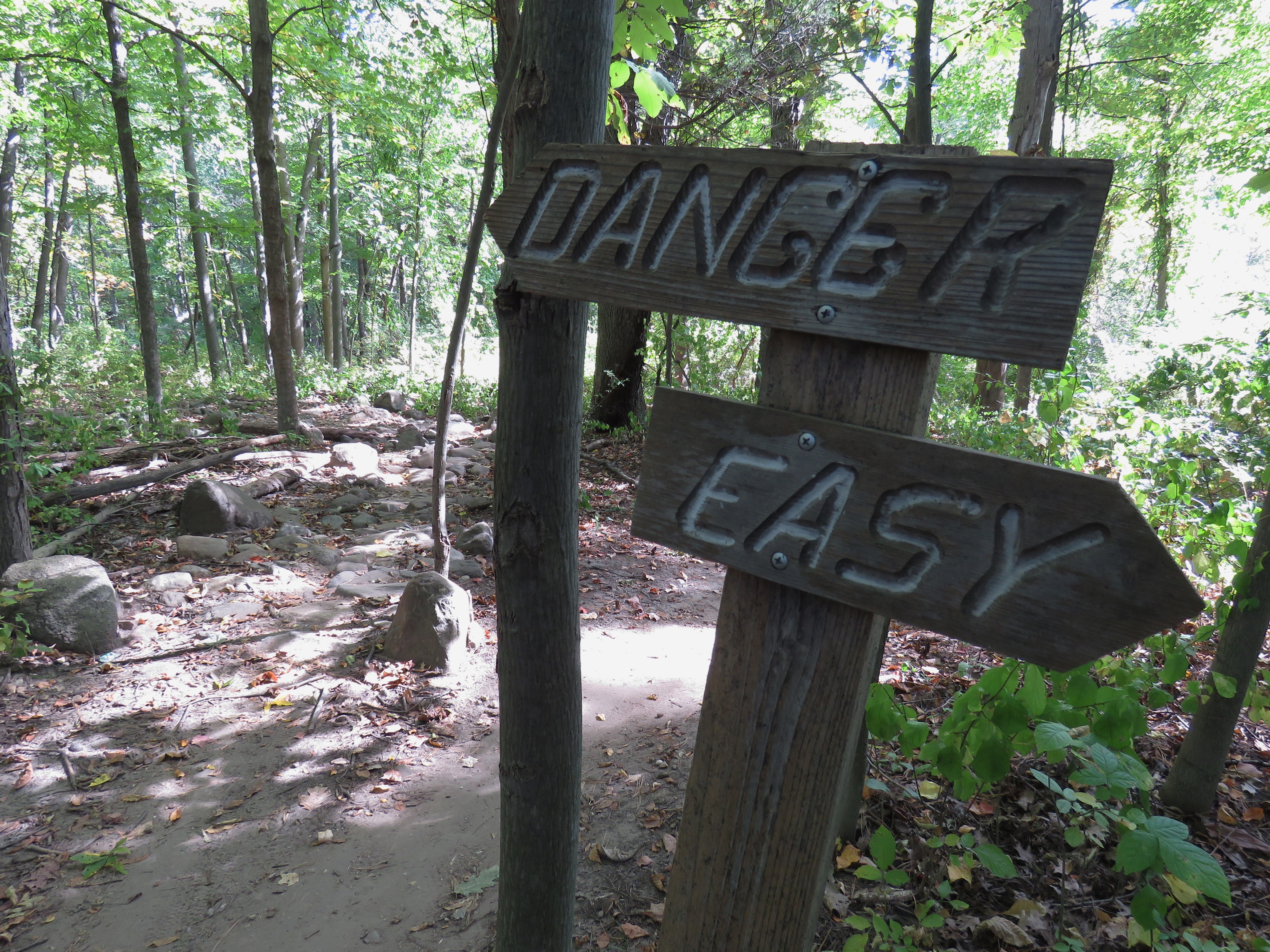 Suddenly, banked turns on narrow wooded boardwalks loomed in front of me. Turned out they were fun to navigate, but my speed was such that an exuberant three-year old on a tricycle might have zipped passed me. After navigating another series of switch backs and squeezing successfully between trees with just inches of clearance on both sides, and only scraping my leg, I realized I was having fun. I was going to live! Thirty minutes later we were done and that’s when Michelle, turned, smiled and said the unexpected, “Want to do the single-track again?” I surprised myself when I said, “Let’s go” and we did. 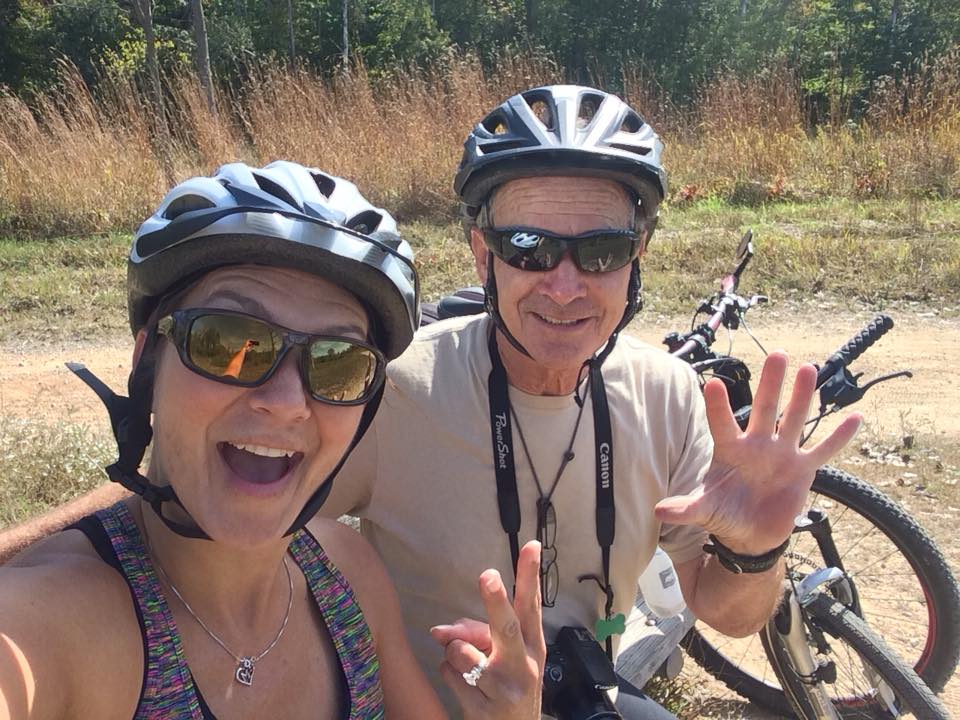 Stony Creek is a top-rated Metropark for hikers, cyclists and mountain bikers with its paved lake shore trail, seven and one half miles of rustic hiking trails and 14 miles of heavily wooded mountain bike dirt trails that traverse the southwest side of the park that are groomed by the Clinton River Area Mountain Bike Association. Hikers are permitted on mountain bike trails, but with folks like me wobbling along on two wheels perhaps its best that all hikers, and experienced mountain bikers stay aware and be wary, as they celebrate autumn in one of our finest Metroparks on the wilder side of Oakland County.