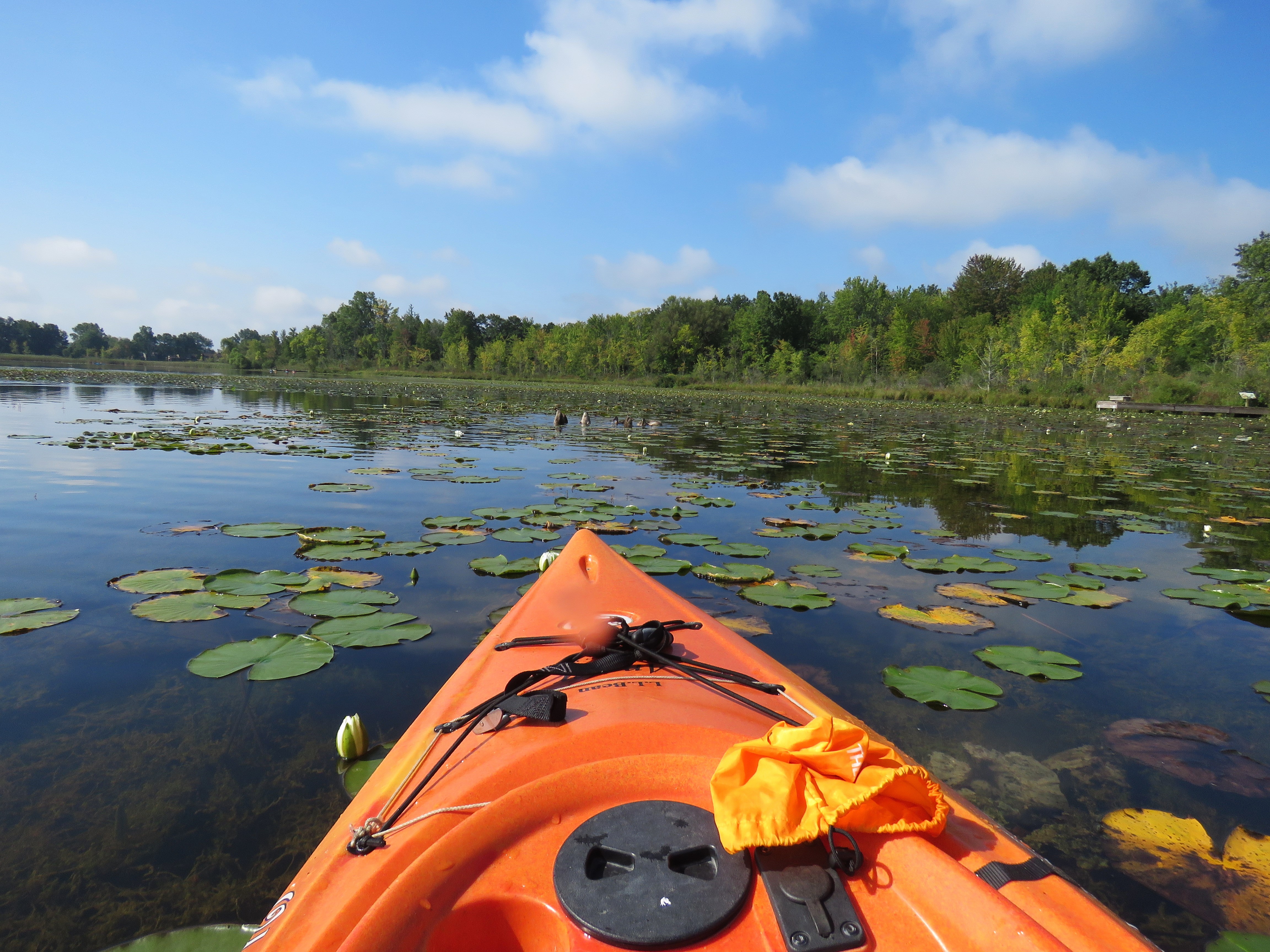 Oakland County would be a lesser place if it was not for our beautiful lakes, wetlands, rivers and streams. With those thoughts in mind, I loaded my kayak onto the roof of my jeep on the last Wednesday of August for a bit of participatory, investigative reporting on Lake Sixteen. 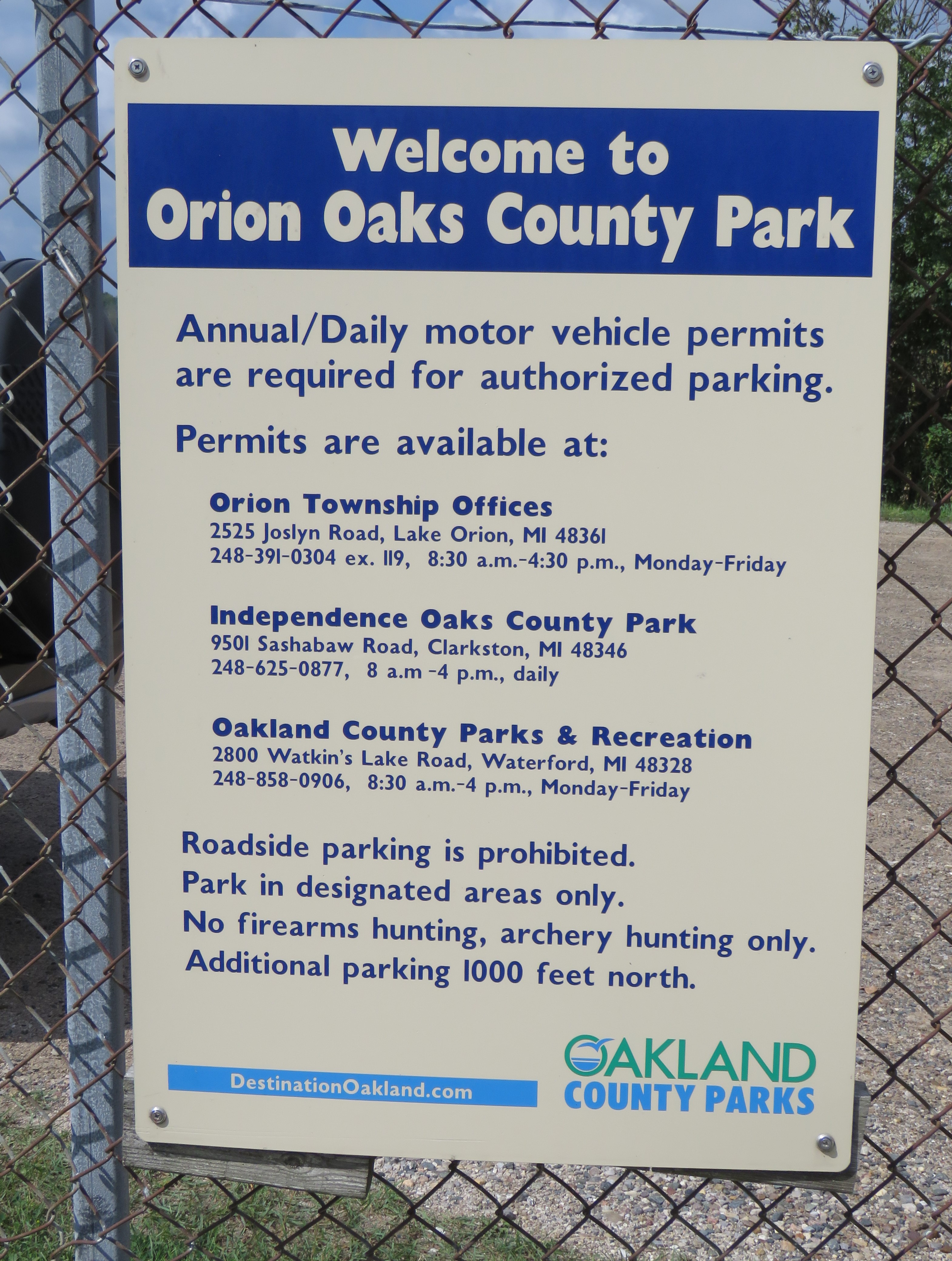 The early morning fog lifted just as I pulled into the small parking area near a fishing pier and a non-motorized boat launch site on Lake Sixteen, a 91-acre lake on the east side of Orion Oaks County Park. Lake Sixteen is one of the hundreds, or some say more than a thousand local lakes that sparkle in the early morning light of fading summer. Here’s what Oakland County’s Prosper Magazine wrote last October about the numerous lakes that enrich our lives, and provide diverse habitat for hundreds of species of wildlife and great outdoor recreation for residents of our county. 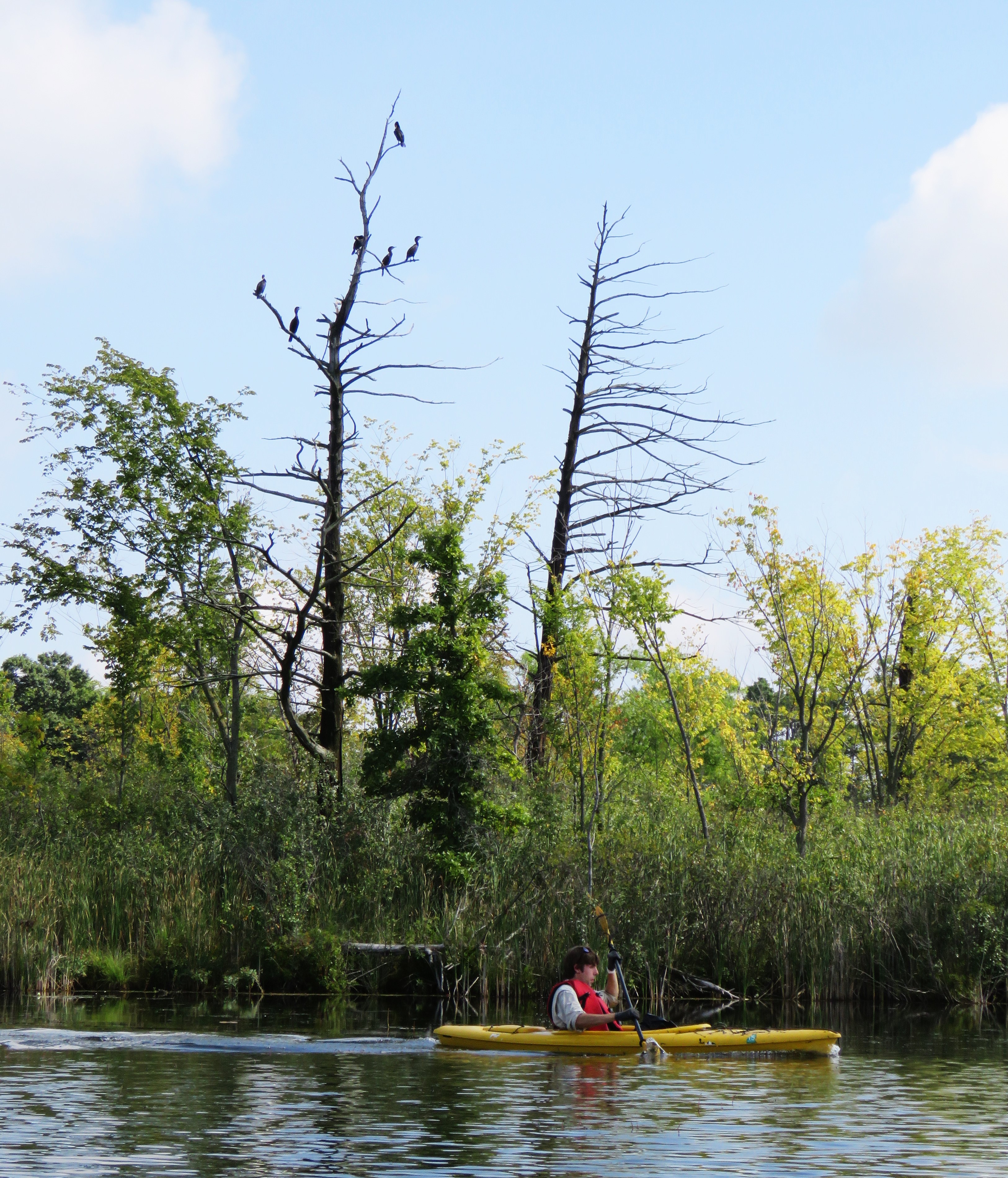 “Start counting the lakes in Oakland County, and you’ll quickly run out of fingers and toes. In fact, you’ll need hundreds (if not thousands) of digits to get the job done. That’s because the county is home to more lakes than any other county in Michigan. Exactly how many lakes dot the landscape depends on who you ask. The Michigan Department of Natural Resources claims Oakland County has 358 lakes, while the website Images of Michigan, quoting the 1912 book History of Oakland County Michigan by Thaddeus DeWitt Seeley, counts 450. Oakland County Parks says the number is 1,468.”

Although the number of lakes may be disputed, what is not in dispute is most of them are considered ‘kettle lakes’, lakes formed by enormous blocks of ice left by the retreating glaciers. Those massive ice blocks depressed the raw soil and glacial till built up around the abandoned ice block creating kettles that held water. During the waning years of the ice age, shorelines of those lakes provided habitat for lumbering mastodons, and giant beavers as large as black bears. Today many of our kettle lakes provide “habitat” for palatial mansions, summer cottages and thankfully, public parks that are focal points for late summer recreation. Unfortunately, far too many humans look at rivers and lakes as dumping grounds, and it is disheartening to discover bottles, old tires, household trash and assorted junk on shorelines or floating in the water.

The Clinton River Watershed Council organize weekly cleans, every Wednesday morning, at different locations throughout the Clinton River Watershed. Upon arrival, I tracked down Melissa Golembieski, the Senior Intern of the Watershed Council who was helping unload kayaks from a county park truck. She said, “We are able to kayak thanks to Oakland County Parks who donated kayaks to us for the cleanup. A lot of the volunteers today are from Chrysler or the Slow Row Paddling group. All of the upcoming weekly clean locations can be found on the CRWC website. In September, we have a lot of fun locations coming up, however the September 20th cleanup on North River Road, under the I-94 Bridge will most likely be the cleanup where we need the most help, just because of the busy location and how much trash we generally find there!” 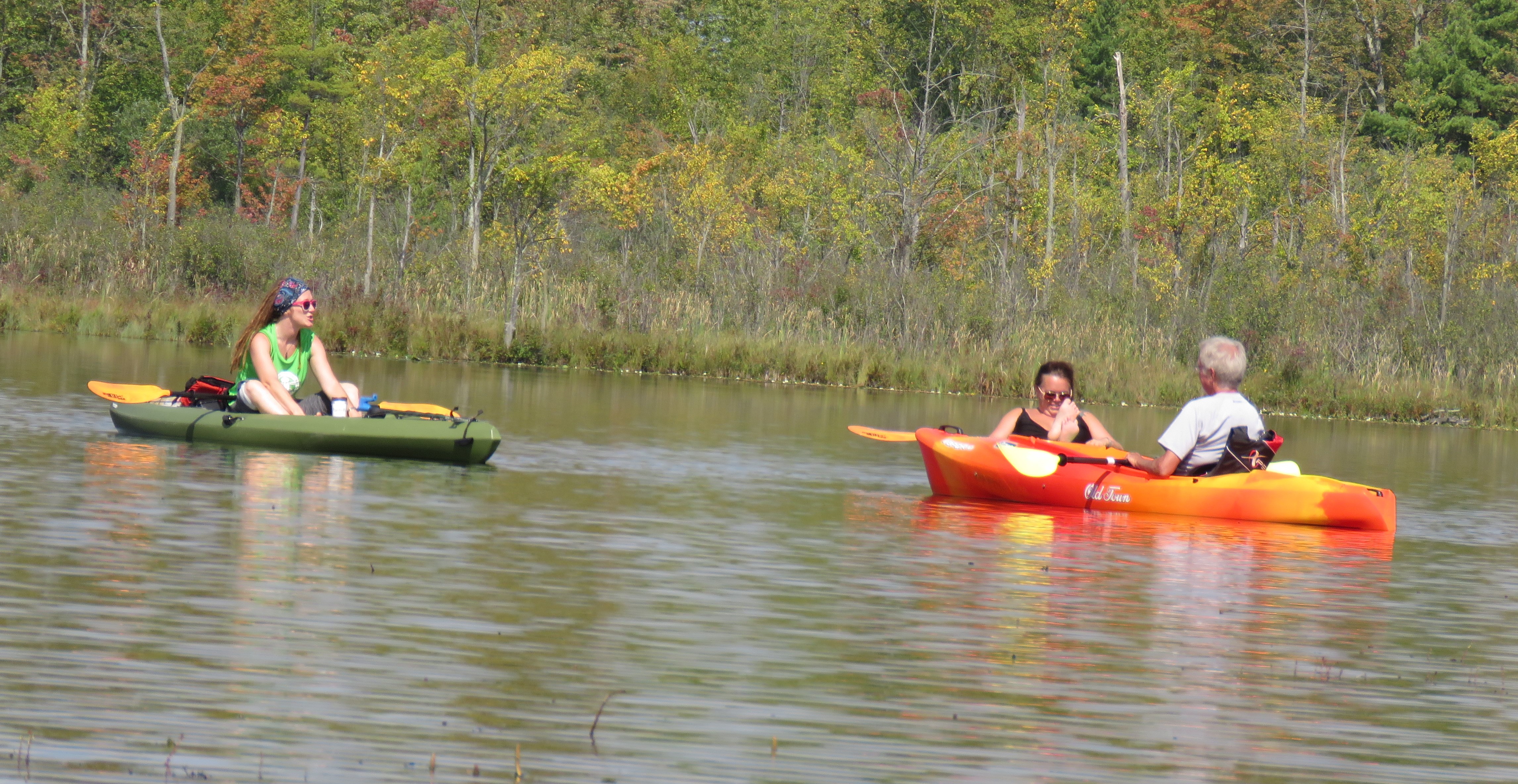 Slow Row was new to me, and so I continued my conversation with Orion Township resident Michele Arquette-Palermo, Head of the Freshwater Forum of the Cranbrook Institute of Science and an active participant in the weekly cleans and Slow Row. She explained “Slow Row LO is a Facebook community group initiated by Orion Township Supervisor, Chris Barnett. He started the group to encourage residents of Lake Orion and surrounding communities to kayak the lakes within the township. The group started in August of 2016 with a handful of residents and has now over 300 followers and even ventures to surrounding communities. Each event hosted by Slow Row LO attracts new people to the group and in some cases introduces people to kayaking for the first time. We encourage people to find our events on Facebook, grab your kayak and join us!”

After a briefing on the battle plan of operations for the Lake Sixteen clean, I became volunteer number 18 for the morning mission, and so I cinched my life jacket tight, cradled a gathering pole with a clasping, tong-like device at the end and shoved off to do my part. I was instantly distracted by the ways of nature. Cormorants perched in a dead tree near the shore and seemed oblivious to my passing. Turtles sunned on shoreline logs and honey bees and small insects visited the blossom of water lilies. A Great Egret and a Great Blue Heron both took flight as I paddled around the group to do some more nature exploring with an eye out for trash. I crossed over to the west side of the lake noting a small wooden pier, and it was there where I spotted an old friend. Not the fellow paddler hunting for trash, but the colorful dockside interpretive sign titled, “Best Dam Builders in the County” that was mounted in such a way that both hikers and paddlers could read it. That was the last sign I helped to create a few years ago when working directly for Oakland County Parks, and was happy to see it had been placed in an appropriate location to interpret the activity of modern day beavers.

After watching a Mute Swan and her cygnet pass by me on their morning paddle, I stayed motionless in my kayak for about ten minutes to view a small flock of mallard ducks dabbling for submerged vegetation in the shallows in their classic “bottoms up” fashion. From there it was time to paddle the shoreline back towards the northeast corner of the lake, home to 24-acre Orion Oaks Dog Park. If dogs could vote for their favorite natural water park, I think Orion Oaks Dog Park would be near the top of their five bark list. At long last I spotted an unnatural object in the water, a tennis ball. Apparently many of the dogs that leapt into the water from their special dock failed to follow the fetch command. At the moment I was unaware that over 100 balls had already been gathered by other paddlers.

Two hours after the paddle began it was time to come ashore at our starting point to unload our trash. I was slightly embarrassed to show my trash find: one soggy, algae coated tennis ball. However it was great to discover Lake Sixteen was amazingly clean with almost all of the “trash” gathered that day being tennis balls and other floating dog toys, along with a few assorted household items that do not belong in lakes. 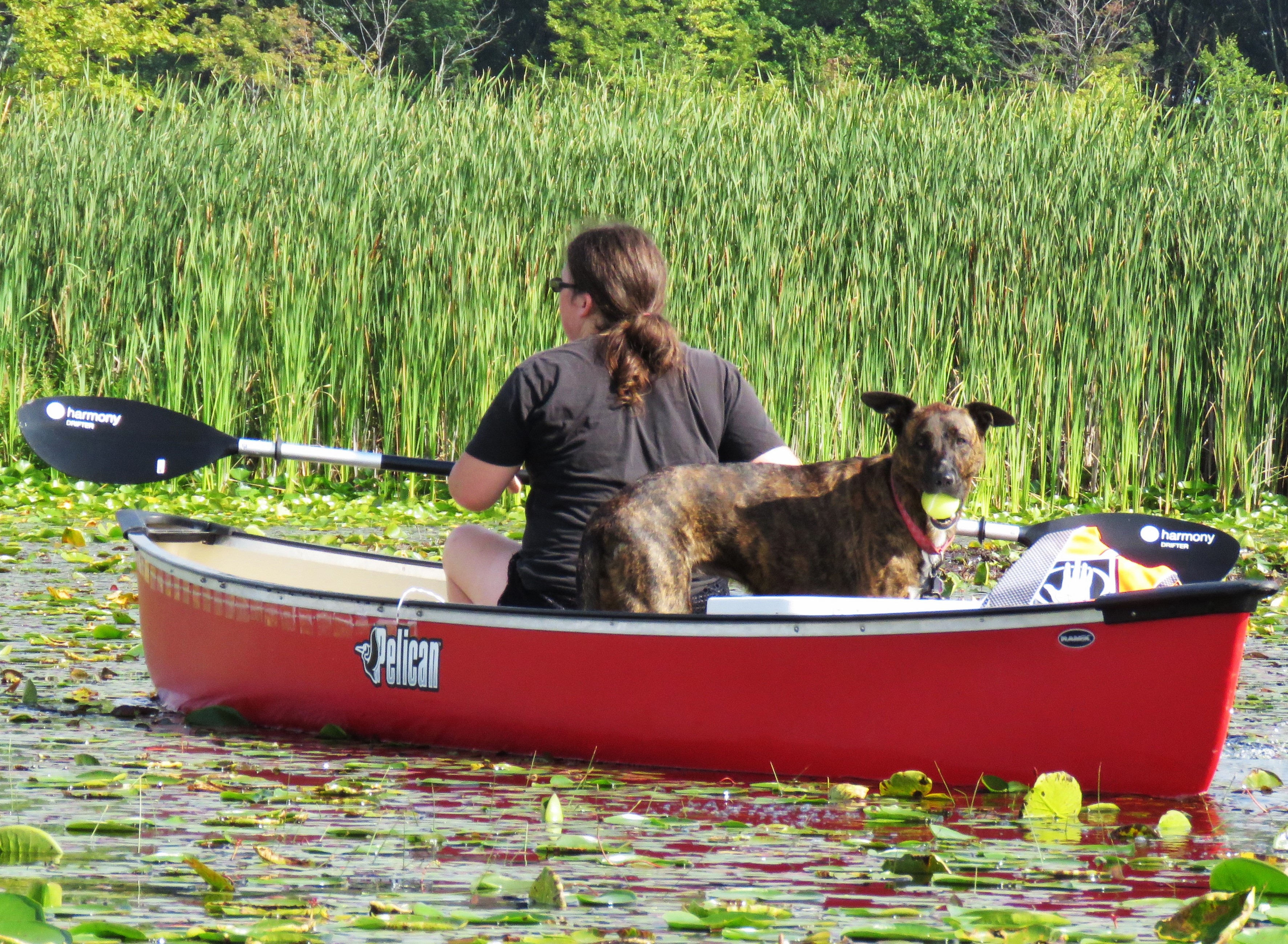 As it turned out 150 floating tennis balls, some that bobbed in plain sight, others that hid under waterlilies and between shoreline cattails near the dog park, were recovered and will be recycled. Perhaps a disclaimer is needed as to the number 150. It might be 149 or 151, or maybe it is 150. Cara would not tell me. Cara is a mixed breed rescue dog that rode in a canoe with a ball in her mouth much of the time. Perhaps she brought it from home, perhaps she retrieved if from the lake, or perhaps she stole it from others and was not going to give it up. Between her silence and my questionable math skills I am happy with 150 tennis balls for our final count. As for mastodons, no sign of them, but I would like to think that somewhere buried under yards of muck and soil their bones may be found someday, adding to the history and wonder of pleasantly clean Lake Sixteen on the Wilder Side of Oakland County.

One thought on “An Early Morning Lake Sixteen Environmental Adventure”