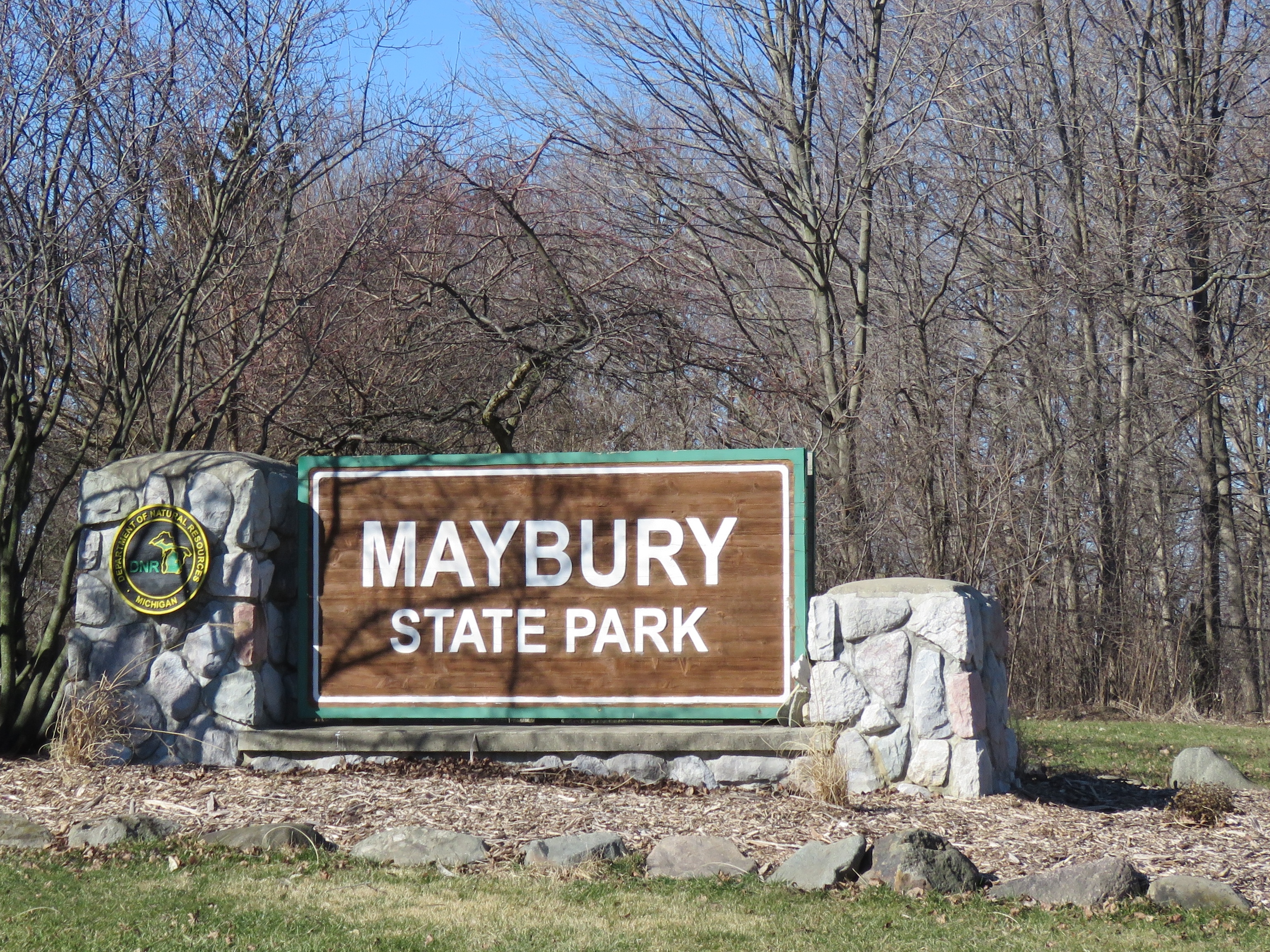 Don’t wait for spring warmth to get your boots on a trail. Some of the very best trails are almost in our backyards, and others are just over the county line. Busy Eight Mile Road is the dividing line between Novi in southernmost Oakland County, and Northville in northernmost Wayne County, and that’s where you’ll find Maybury State Park. The park is without question one of the most popular Michigan State Parks in southeast Michigan. This 940-acre park, managed by the Michigan Department of Natural Resources, is located entirely on the Wayne County side of Eight Mile Road, but by this summer, access by foot or by bicycle for Oakland County residents will be a lot easier, and much safer. Here’s why: 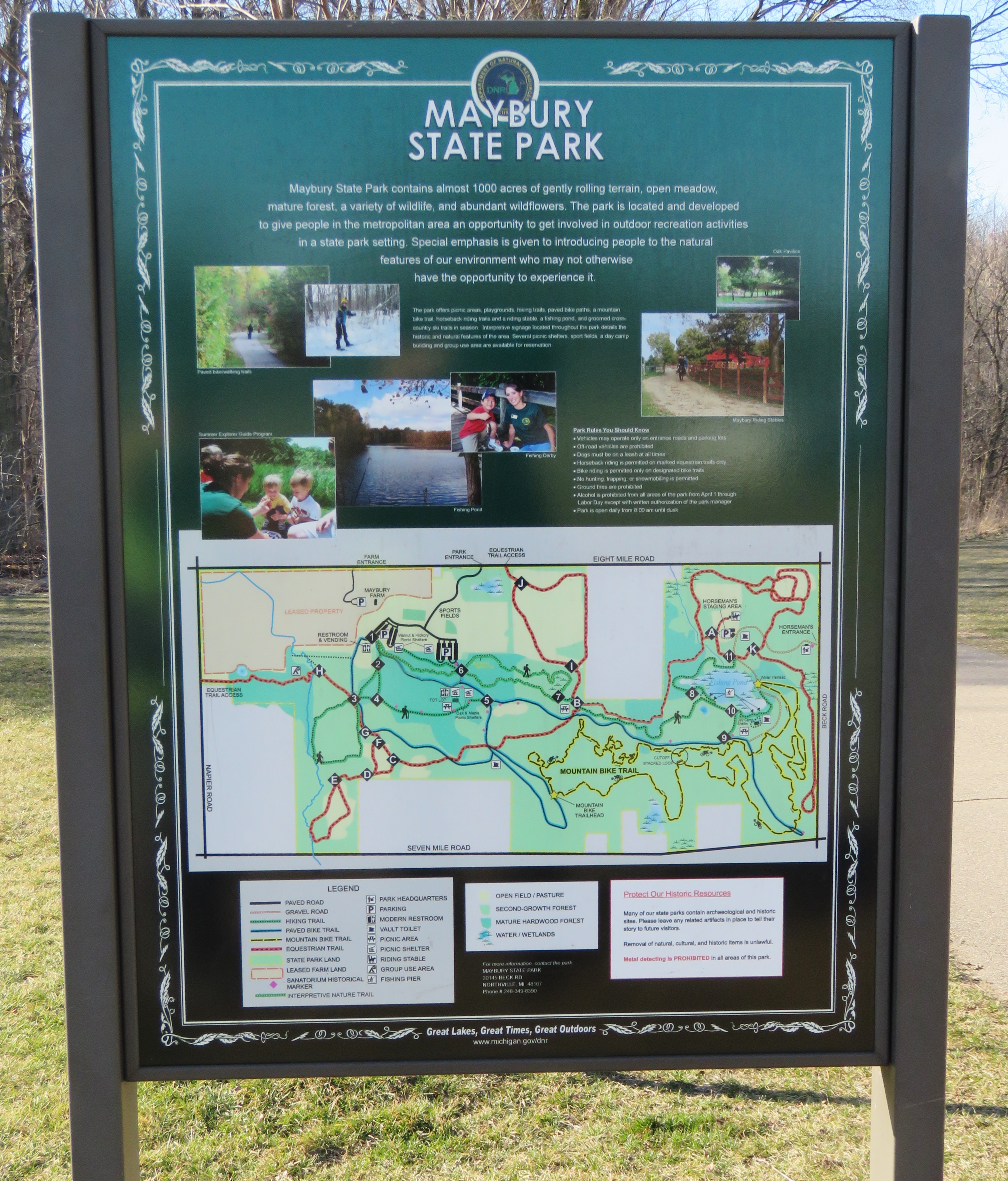 The City of Novi is in the process of constructing pathways from Maybury State Park’s Eight Mile Road entrance west to the ITC Sports Park at Eight Mile and Napier Road. Another pathway will run north through that sports park complex to the already existing ITC Corridor Trail in southwestern Oakland County. This ongoing project of trail connectivity is a great reminder that in the world of nature, and the world of trails, all things can be connected when different agencies, engineers, planners, and cities work together for a common goal. According to the City of Novi’s Non-Motorized Plan, these links will eventually connect Maybury State Park to two City of Novi Parks: Wildlife Woods Park and their largest park, Lakeshore Park on Walled Lake, the largest lake in the city. That’s great news for everyone, on both sides of the county line.

Early last Sunday morning, with the temperature hovering just above the single digits, and much of the county remaining powerless after powerful windstorms, I went to Maybury State Park the old-fashioned way – by auto – to see what the trails and woods offered in the waning days of winter. My nature-embracing excursion was more than a recon mission to confirm the facts on the ground of impeding trail connectivity, it was an exciting adventure into a landscape with rich natural history and unusual human history.

My Maybury State Park welcoming committee had four legs. A not-so-shy white-tailed deer met me just a few hundred feet down the trail making the moment a perfect start to a frosty, but sun-soaked morning. 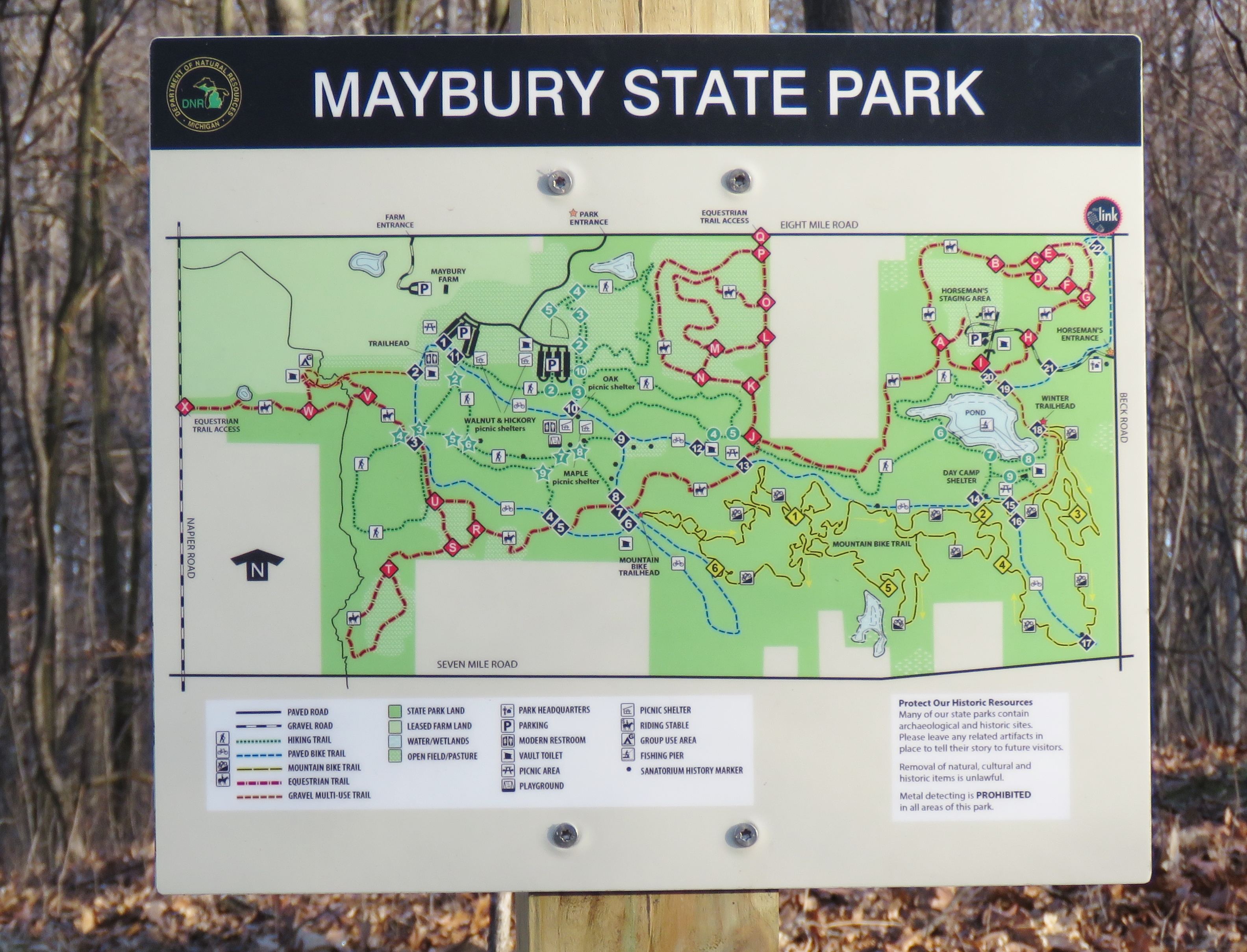 The deer watched as I mused over a PDF copy of the park map. The meandering crisscrossing trails were created to accommodate multiple user groups with minimal conflict over areas of diverse terrain. There appeared to be over twenty miles of trails, some dedicated to hikers, about eleven miles for equestrians, a hilly single track route for mountain bikers, perhaps five or six paved miles for cyclists, and a fair amount of overlapping trail usage. Although some of the trail junctions have standard DNR style maps on marker posts, many trail crossings are not marked. With a bit of common sense and the PDF map, hikers and other adventurers should do just fine. While some of the trails follow the glacial sculpted landscape curves, a few followed remnants of old roads and pathways, giving way to a historical portal into the shadowy world that was part of the Detroit Municipal Tuberculosis Sanatorium. 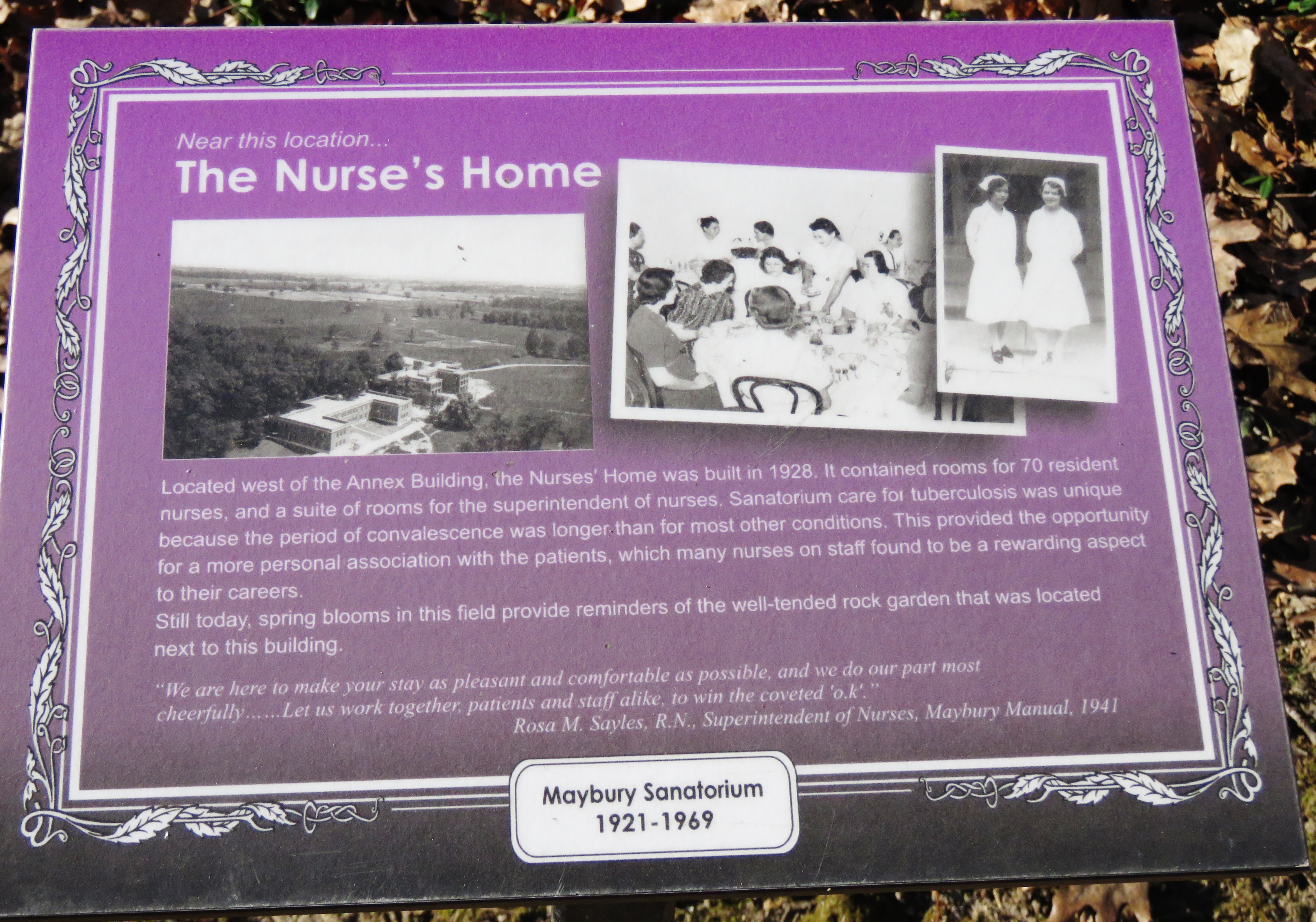 As tuberculosis (TB) spread in the early 1900s, Detroit planned a massive tuberculosis sanatorium. The landscape of Northville was perfect, and in 1919 William H. Maybury spearheaded the planning and construction. Soon after, the city built the sanatorium in what was then rural farmland to free up hospital beds in the city and contain the risk of contagion to the community. It provided TB sufferers with proper care, clean conditions, lots of healthy open space, and endless fresh air. 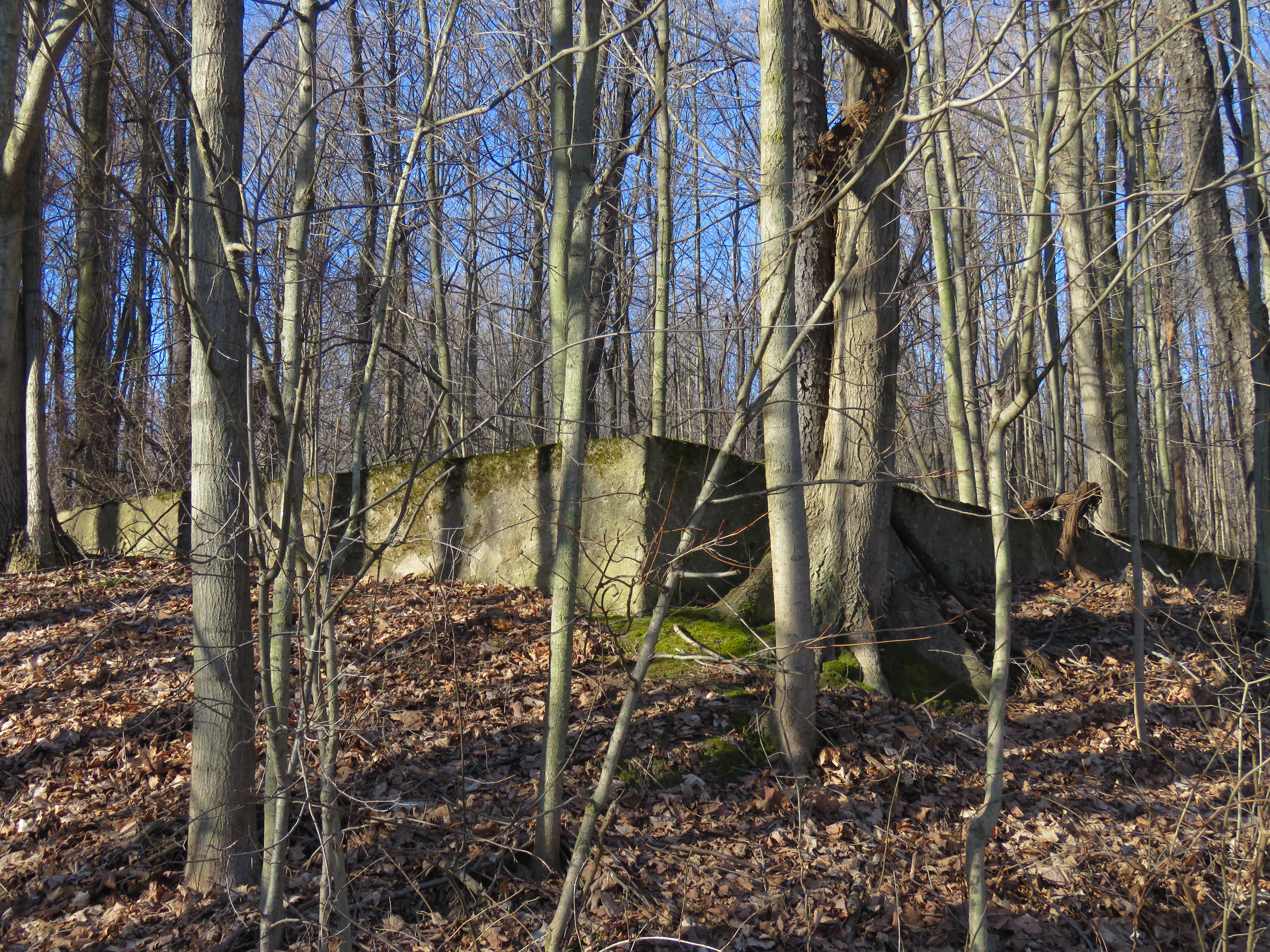 The medical facility complex included dorms, a school, housing for doctors and nurses, treatment facilities, and a farming operation to feed the staff and patients. The facility was closed in 1969 and most of the buildings demolished in 1975 when the Michigan DNR bought the land and named the site of the former sanatorium Maybury State Park. 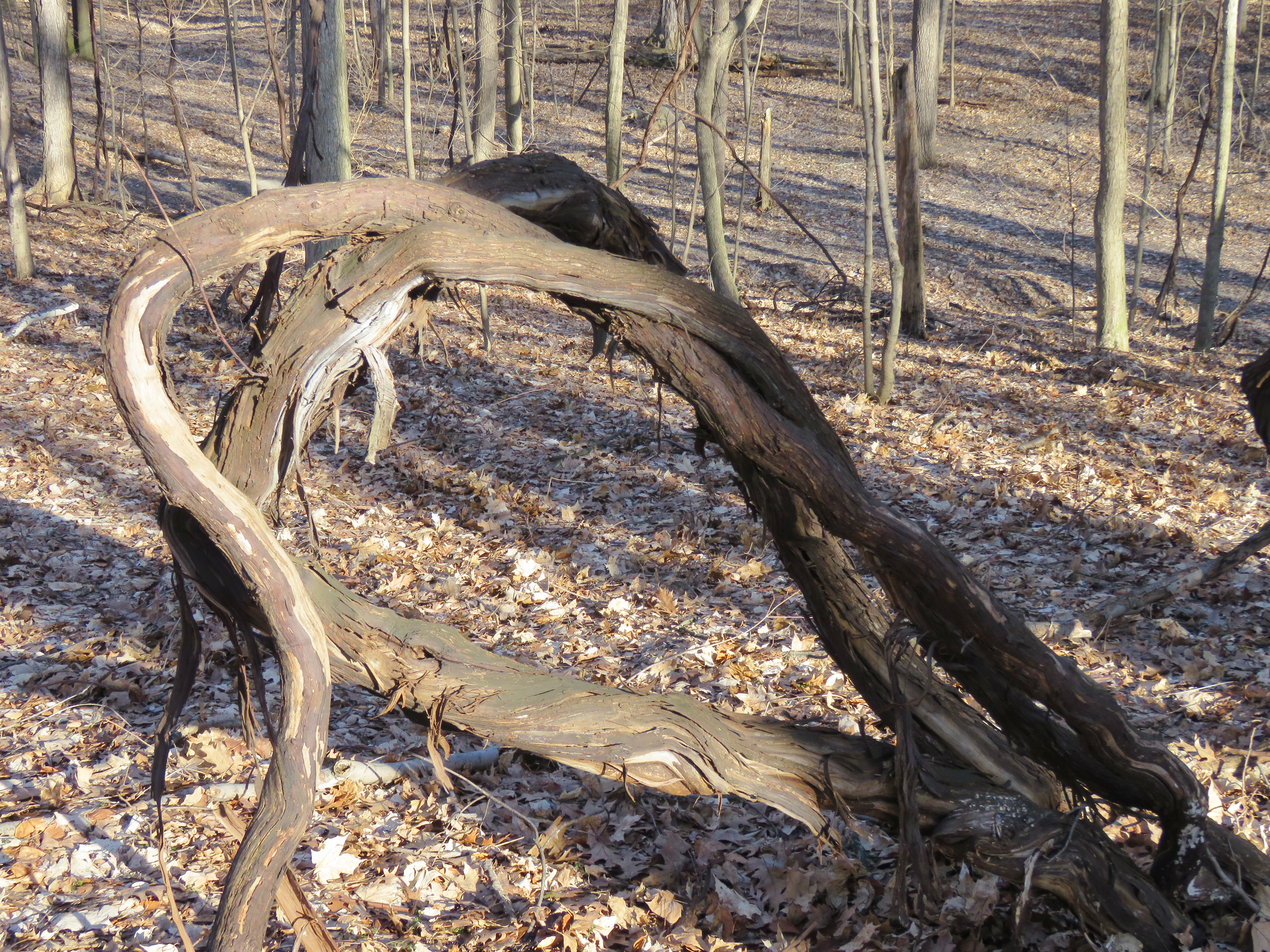 The footprint of the sanatorium is easy to find if park users walk slowly and keep an eye open for old stone foundations and the now massive grape vines that may be well over 100 years old. The Michigan DNR placed small interpretive signs trailside that share part of the land’s history. The information they contain adds to the pleasure of park exploration. 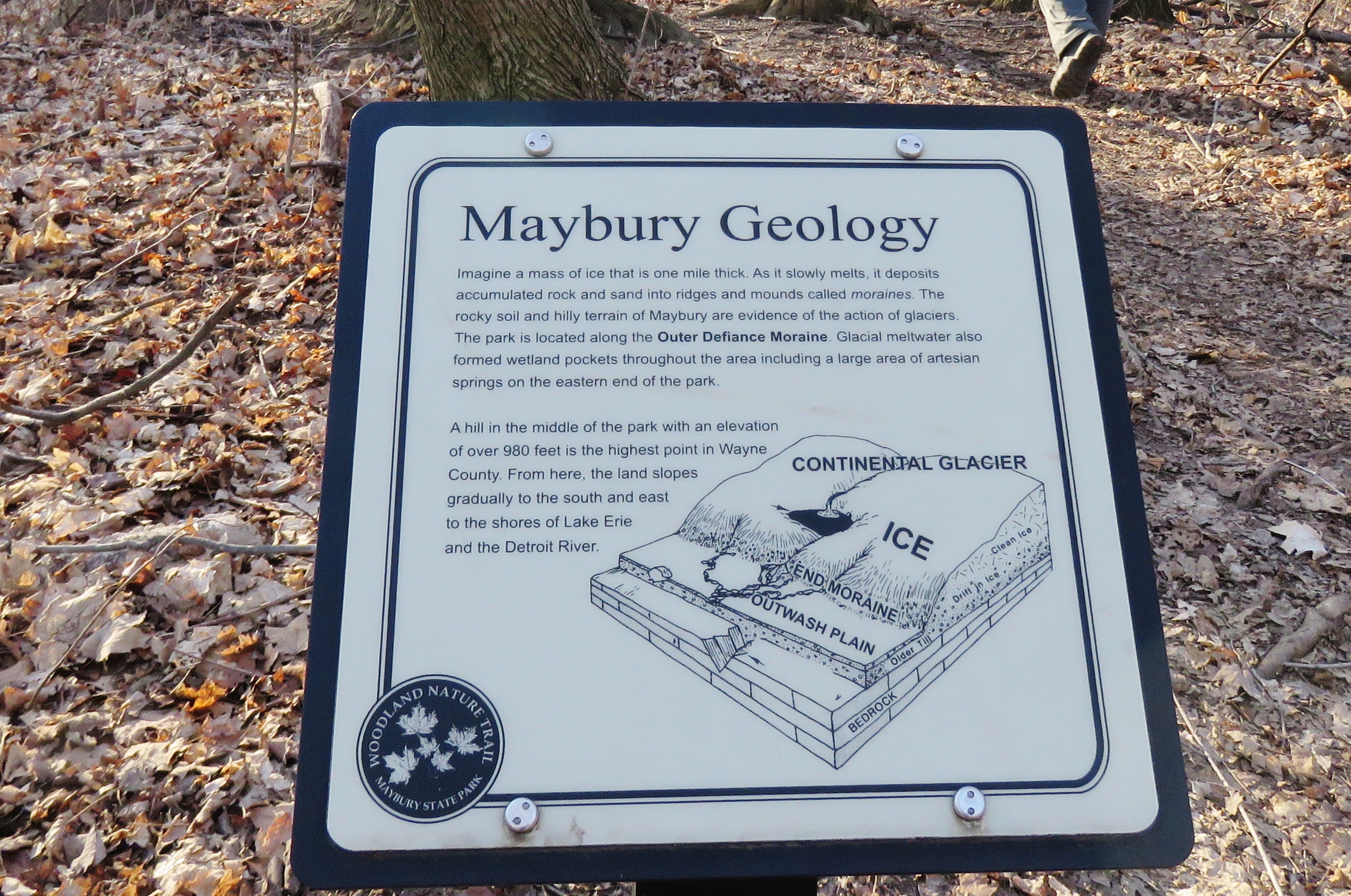 The geology of the land in the leafless days of winter’s end is an open story book. The hilly terrain and rock-strewn soil of Maybury is clear evidence of glacial action. As the glaciers retreated, great blocks of ice and meltwater outflow formed depressions in the soil. These wetland pockets will soon be teeming with breeding frogs and salamanders, the song of wood frogs, and spring peepers will fill the air. I noted a few early arrival Mallard Ducks and a pair of Mute Swans on a large pond with a fishing pier. That habitat looked excellent as a fishing ground for Great Blue Herons and American Egrets, and a hunting ground for Barred Owls. 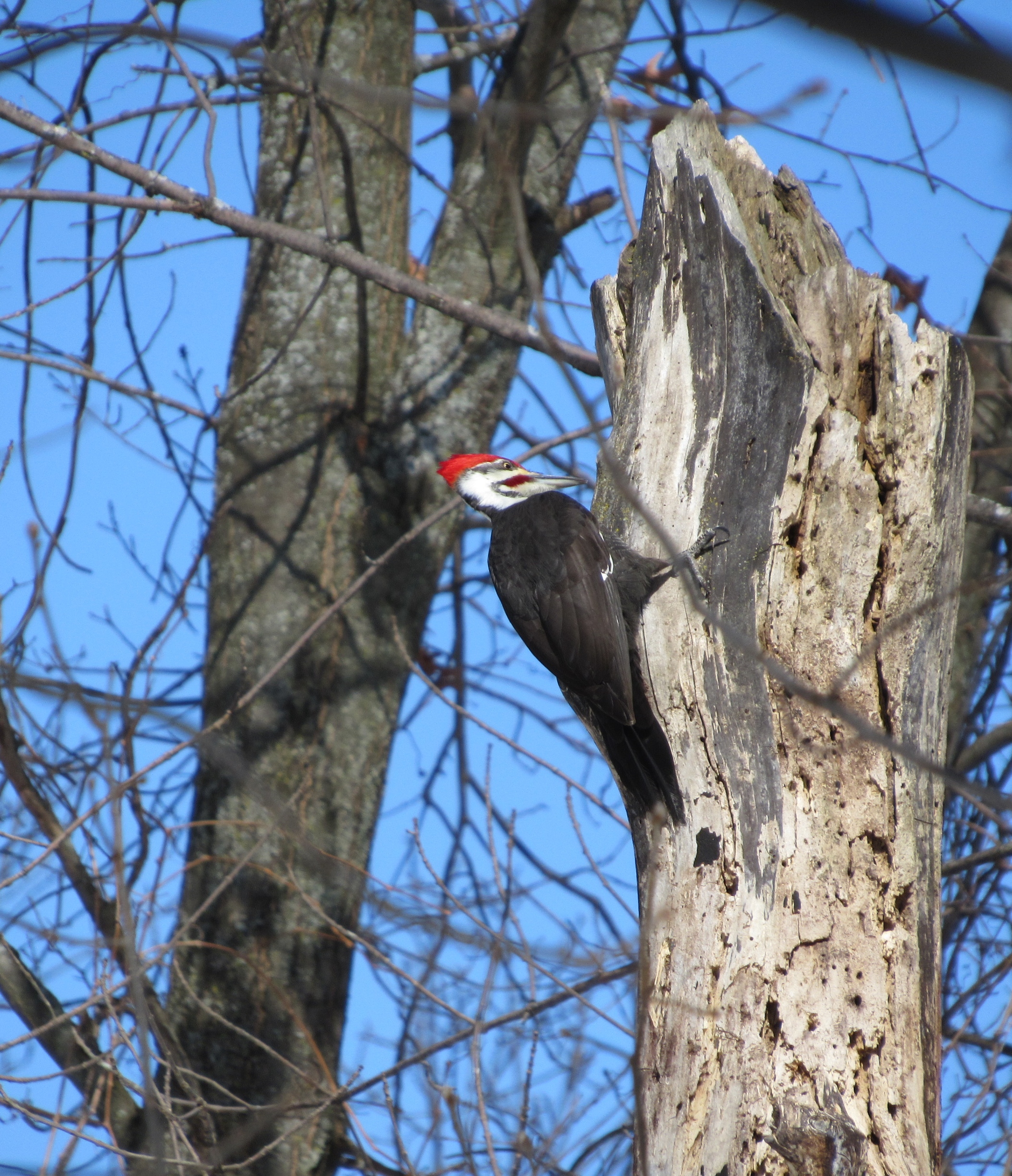 Last week’s windstorm left its mark too. A few tall trees snapped in half, others were uprooted. Pileated Woodpeckers, the red-crested flying forest giants of our forests, will continue to exploit new opportunities among the dead trees.

I encountered a few joggers, four or five fleet trail-runners, two slow-paced strollers, one mountain biker, and one other “nature-hungry” hiker during my three hour adventure. I can only image how busy Maybury State Park will be once the wooded hillsides are speckled with ephemeral wildflowers, signaling hundreds of folks on both sides of the county line that it’s time to come explore, picnic, and play. But on Sunday, the woods were quiet except for the territorial drumming of woodpeckers, and the crackle of frost underfoot, and that was just fine with me. 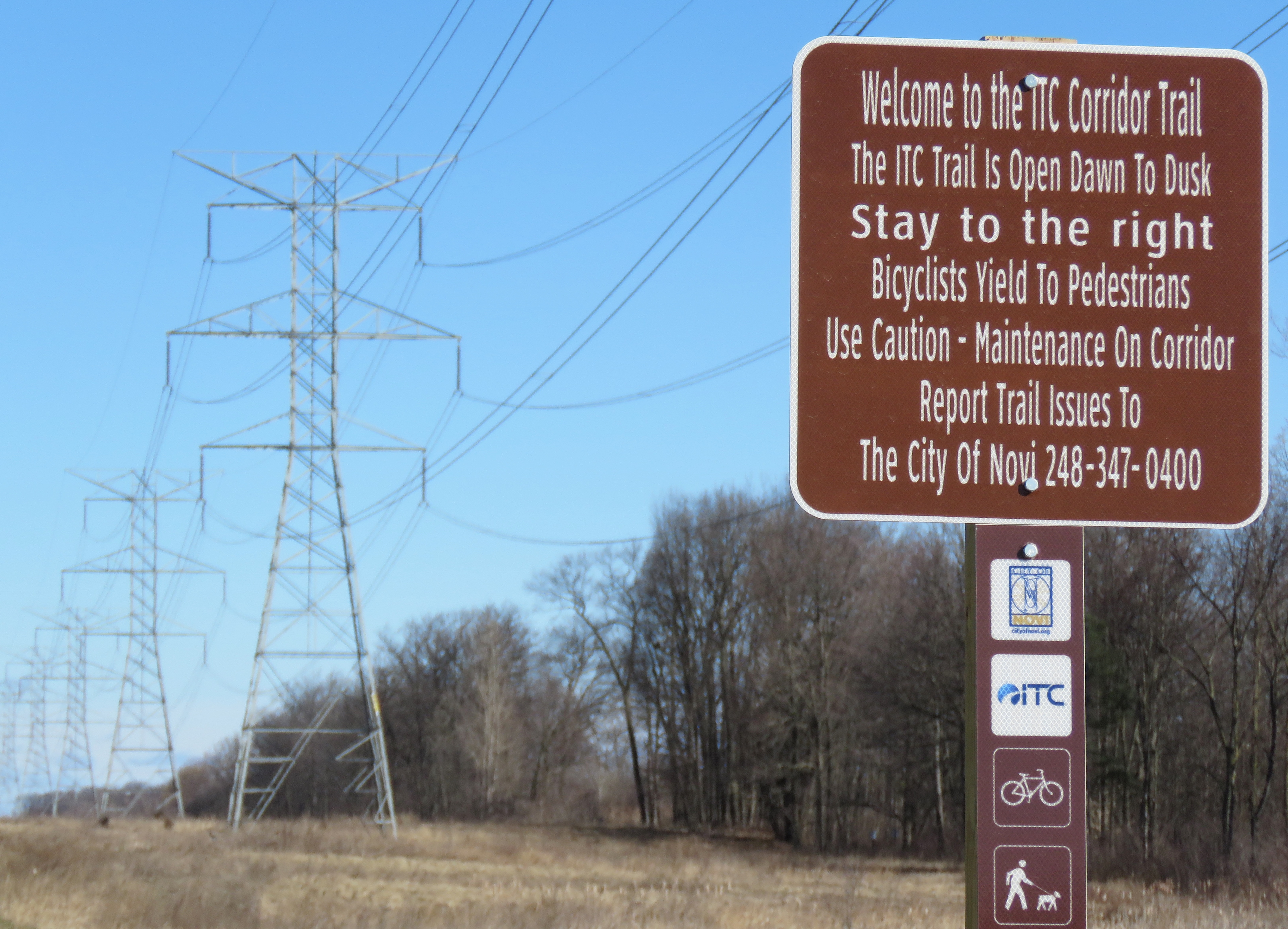 A final exploration was in order during my return trek to Oakland County. I inspected the sites of the future connectivity pathway, and the already open ITC Sports Park and ITC Trail Corridor in the far southwest Corner of the Wilder Side of Oakland County. Next time I head to Maybury State Park I just may park somewhere in Oakland County and follow the new trails across the county line. 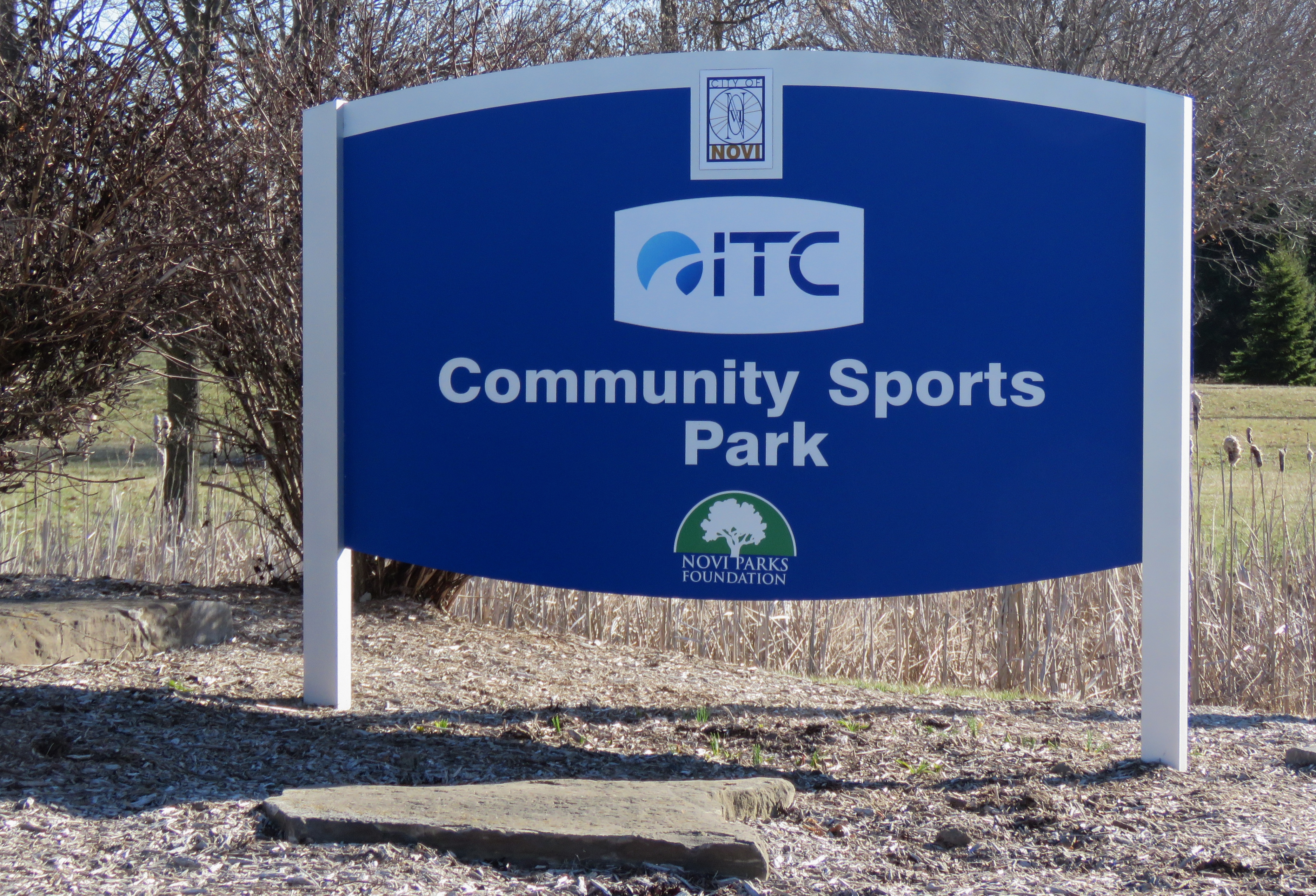 One thought on “Maybury State Park: A Trail Tale of Two County Connectivity”