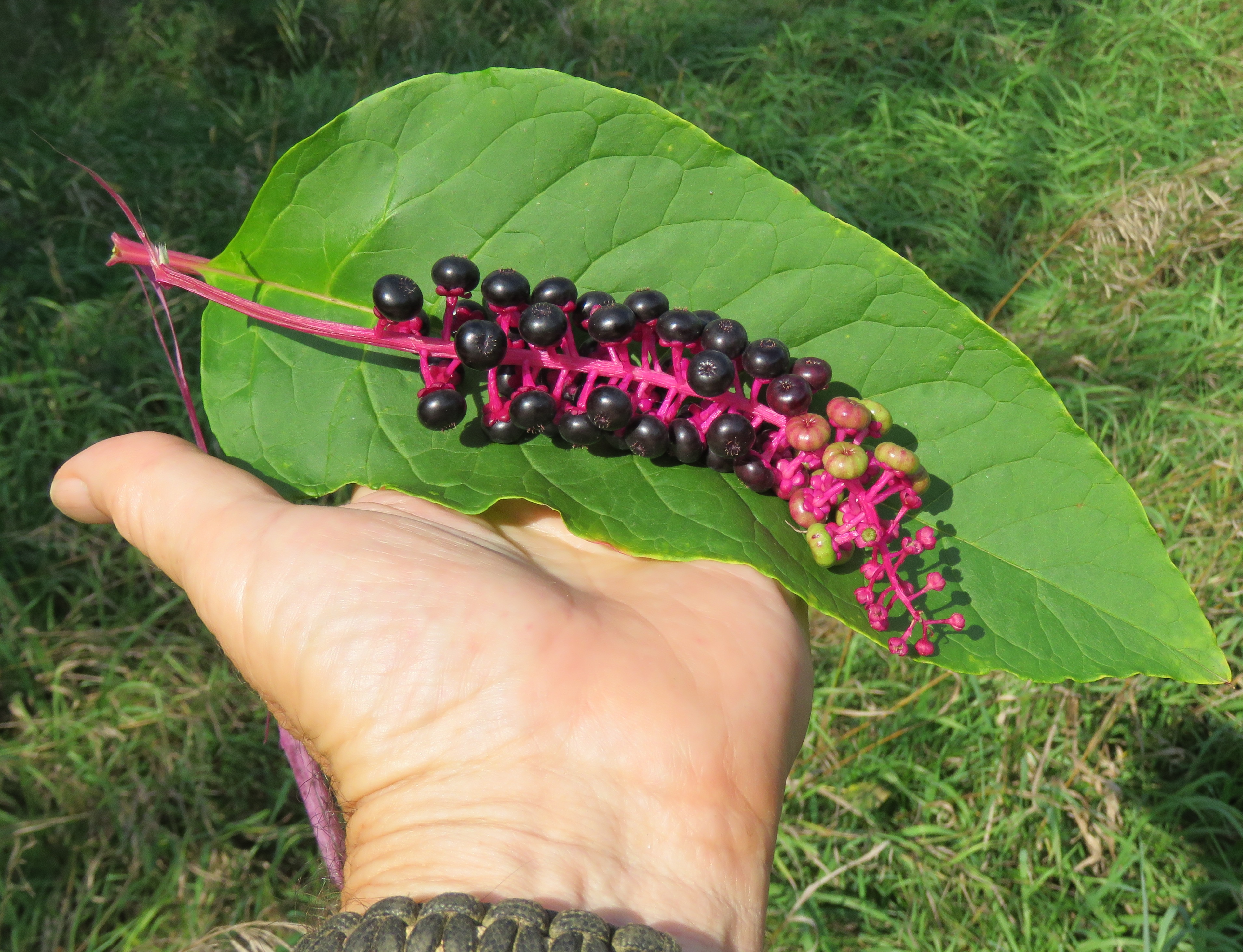 Pokeweed (Phytolacca Americana) is drawing attention in these closing days of summer. This colorful native plant with a controversial cultural and folk history has even poked up without invitation at the edge of the manicured Cranbrook Gardens.

Not many plants have a song, but this one does. In 1969 Tony Joe White’s “Polk Salad Annie” became an instant country hit with memorable melancholy lyrics describing the lifestyle and family misfortunes of Annie, a Louisiana woman who gathered the leaves of pokeweed to feed her family.“She’d go out in the evenings to pick a mess of it… Carry it home and cook it for supper, ’cause that’s about all they had to eat.”  As for her biggest misfortunes; a gator ate her granny. 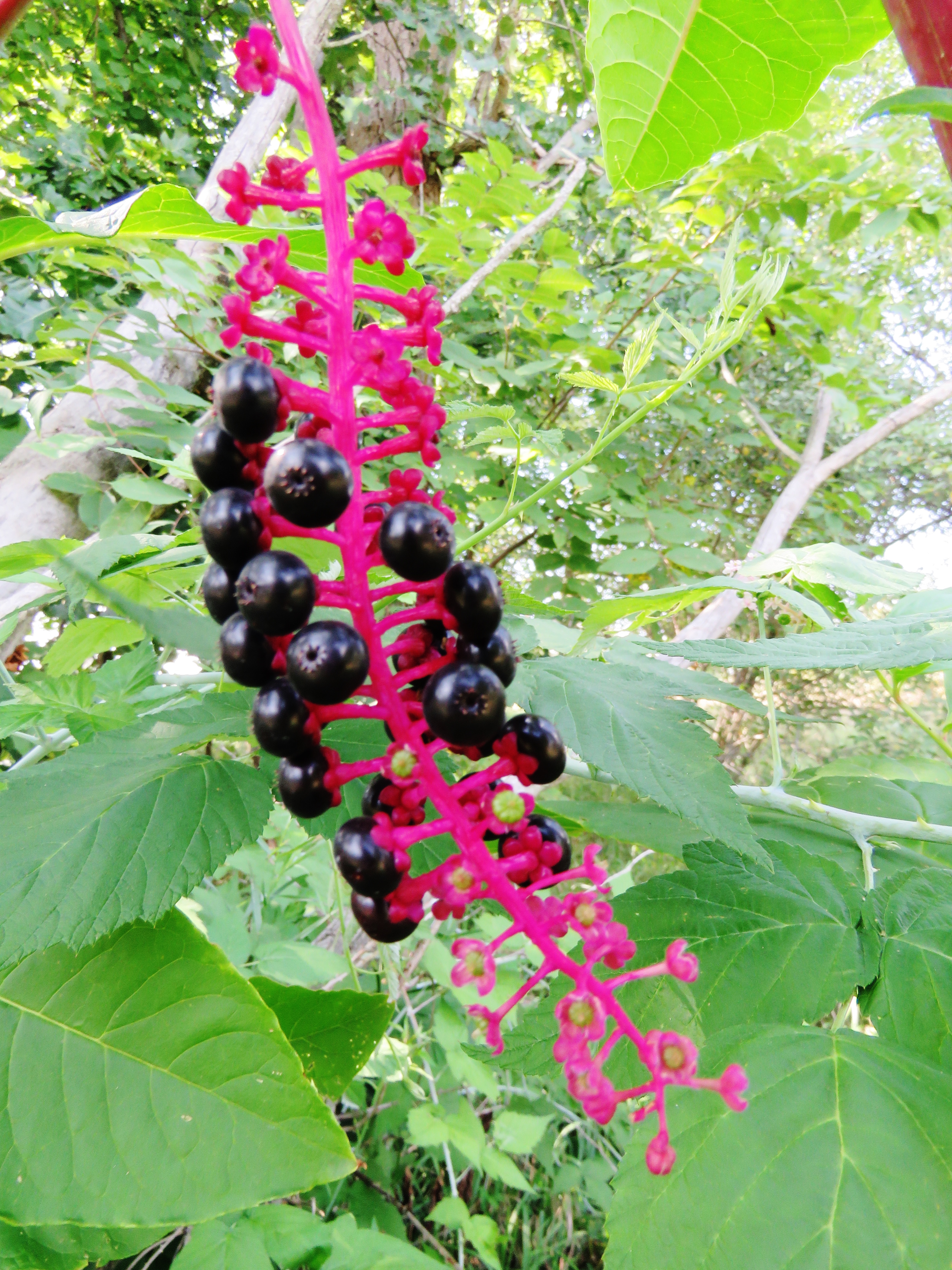 Pokeweed is an easy to spot showy plant with stout purple stems, bright green lance shaped leaves, and distinctive purplish-black berries dangling down from the stems. If soil and moisture conditions are just right it can be more than eight feet tall. Pokeweed also has a dark secret that should give any forager pause. Although birds feed on the berries, and Annie boiled the leaves – boiled them twice – to feed her family, credible field guides and medical professionals warn that the entire plant is poisonous to humans and boiling leaves twice may not remove toxins.

When the plants first emerge in spring, the tender leaves were commonly gathered in the American South to create the traditional delicacy known as “Poke Sallet.” In Arkansas, Allen Canning Co. specialized in poke sallet, made from the pokeweed. It was popular because as one of the first spring greens it served to provide relief from a common winter menu that consisted mostly of salt pork, beans, and cornbread. As the people who grew up on poke sallet began to die off, the demand for the item dried up. Allen Canning packed its last batch of poke sallet greens in the spring of 2000. 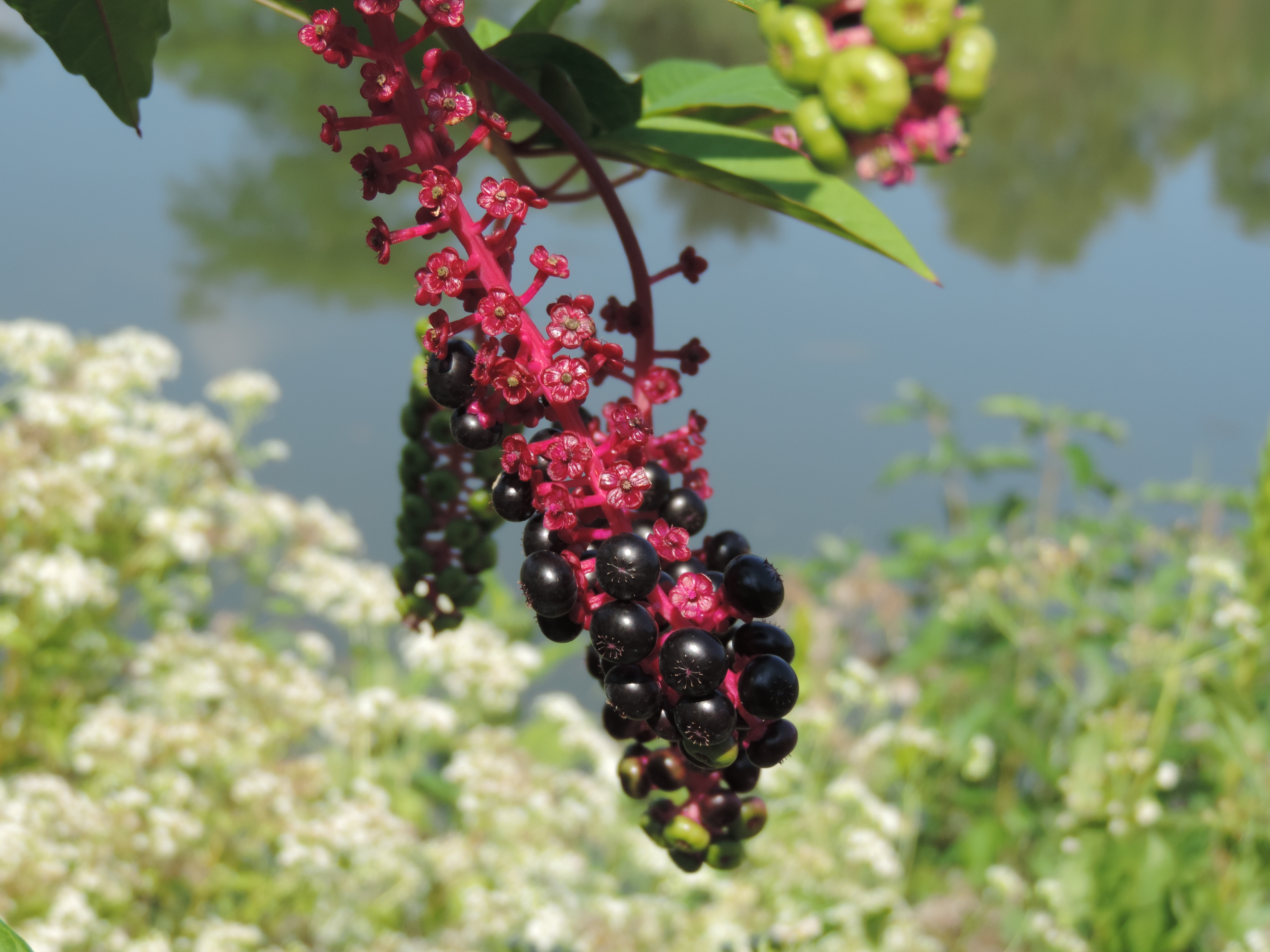 Native Americans treated many ailments with poultices of pokeweed and even decorated horses with a botanical paint made from pokeweed. Supporters of James Polk, our 11th president, wore twigs of pokeweed on their lapels during his campaign. During the Civil War, pokeberry ink was used by soldiers to write home from the battlefields. Poultices of pokeweed have been used to treat rheumatism, sprains, bruises and —“bewitchment”.

Popular literature continues to discuss the plant’s potency, antiviral properties and possible medical uses to treat AIDS and cancers, however the Memorial Sloan Kettering Cancer Center warns, “Because pokeweed has toxic effects, it should not be used to treat cancer, infections, inflammation, or any other medical condition. Pokeweed contains chemicals that are known toxins, but several of its other components have shown biological activity in laboratory experiments. None of these effects have been seen in the human body.” The list of possible side effects of casual ingestion include severe stomach cramping, nausea and vomiting, difficult breathing, weakness, hypotension, convulsions, and sometimes death.

Although Annie’s family survived eating pokeweed leaves that were boiled twice my best advice as you hike the trails on the Wilder Side of Oakland County is to leave pokeweed alone. Though birds feast on the berries, people should only admire the berries, and the rest of this plant, as a sign that the dawn of autumn draws near.