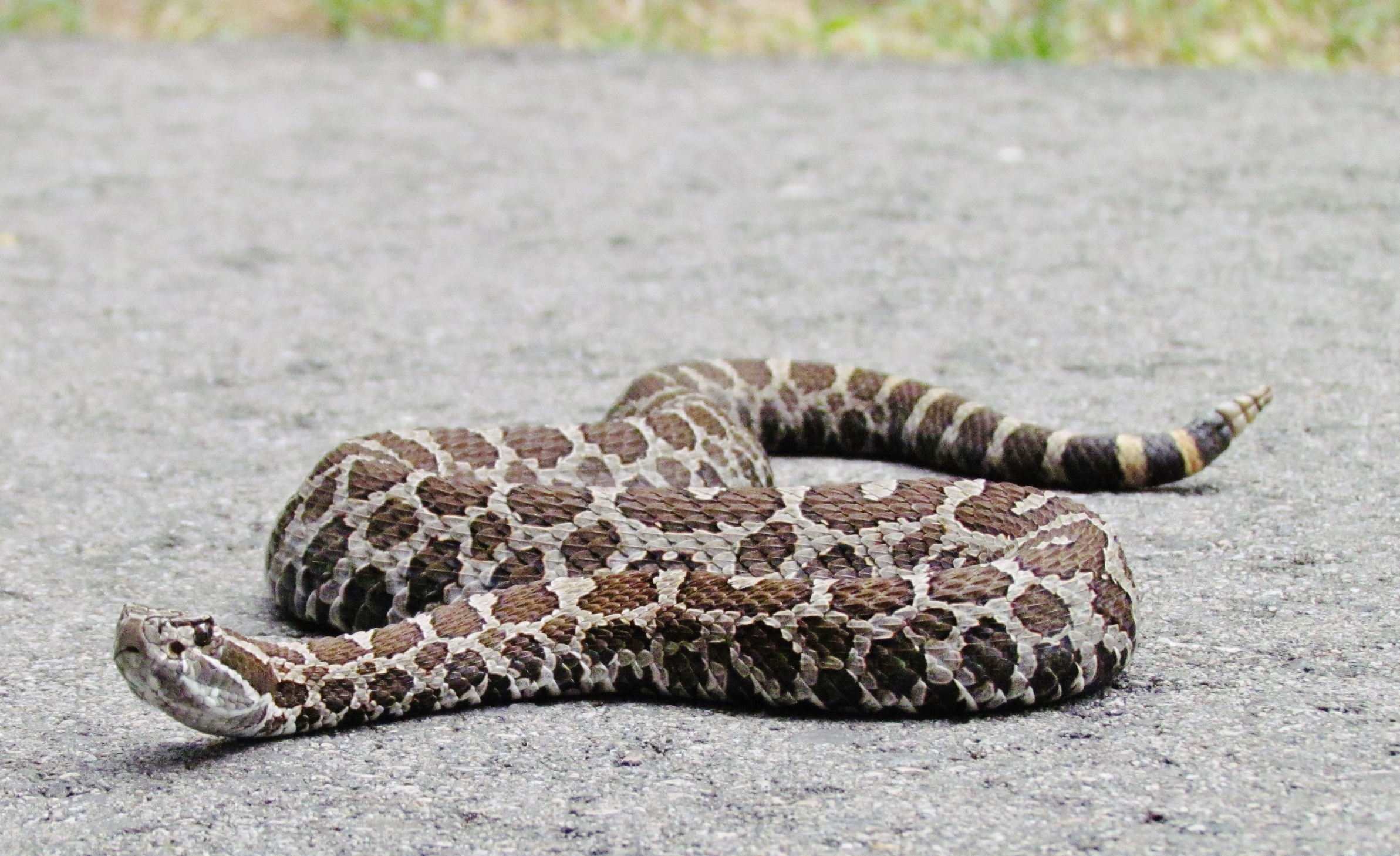 August is the birthing season for the reclusive ‘swamp rattlers’ of Oakland County. Like all rattlesnakes, the eastern massasauga rattlesnakes (Sistrurus catenatus catenatus) bear live young. The United States Fish and Wildlife Service states, “The young actually hatch from eggs while still in the female’s body. Depending on the health of the individual, adult females may bear young every year or every other year.” According to the Michigan Department of Natural Resources, our state’s only venomous snake gives birth to eight to twenty young. The little rattlers disperse shortly after birth and strike out on their own in our county of swamps and uplands using their heat-sensitive pits on the sides of their head to detect prey. 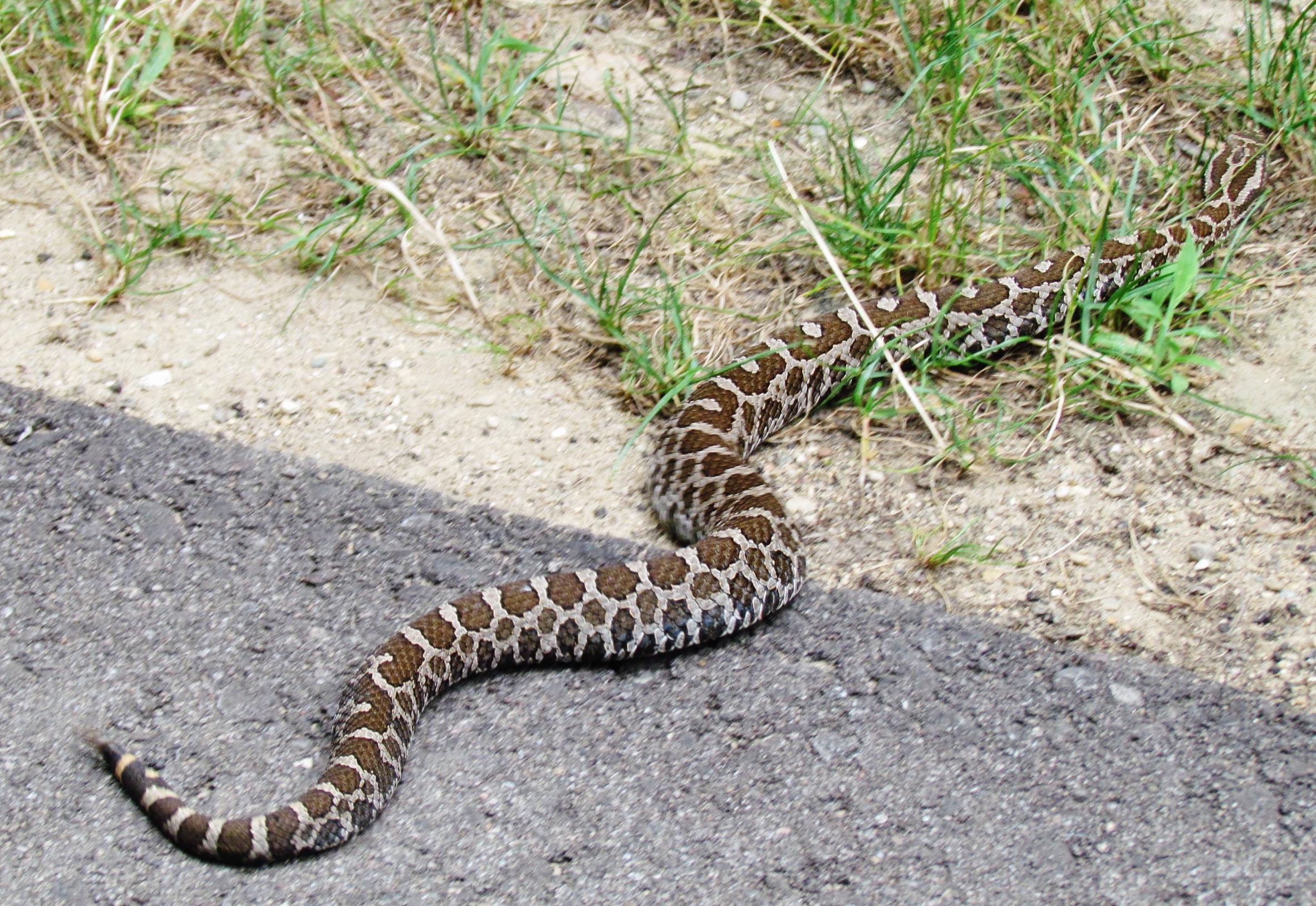 The massasauga is a docile, seldom seen and rather secretive snake that will try to escape rather than strike. Almost all bites – and bites on humans are rare and provoked – occur when a bold, intoxicated or foolish human tries to capture or kill the snake. Massasaugas are very much at home in many of the Huron-Clinton Metroparks, Oakland County Parks, at Seven Lakes State Park in Holly Township, in all of our local state recreation areas and in any suitable neighborhood habitat in Oakland County, and adjacent counties. There is even a small road in Brandon Township with the name, Rattlesnake Lane. Massasaugas know no borders; it’s all about habitat and the complex matrix of wetlands and dry uplands created by retreating glaciers. This landscape variety sets the stage for the eastern massasauga rattlesnakes of today to thrive in our county of great oaks, swamps, wetlands and marshes.

The U.S. Fish and Wildlife Service is evaluating the Great Lakes population of massasaugas to see if it should be listed as a threatened species. While it is currently a candidate for federal listing, Michigan lists it as a species of Special Concern and it is protected by Michigan State law. Many people misidentify rattlesnakes and often confuse them with northern water snakes, milk snakes, fox snakes and the rarely seen eastern hognose snakes. This 60 second video from the wildlife division of the Michigan Department of Natural Resources helps identify the massasauga. If you see a massasauga rattler in one of our Oakland County Parks, leave it be and try to capture a photo (without getting too close) that includes a bit of the habitat and let us know.

On cool days, massasaugas may sun on warm surfaces, including trails, as the adult rattler in the accompanying photos did on a hike-bike trail at Indian Springs Metropark. Once autumn weather grips the landscape and the days shorten, massasaugas stop hunting their primary prey of mice and voles and the occasional frog and head for the wetlands and moist meadows. It is there that they seek out the building skills of a keystone species, the chimney crayfish. The rattler slithers down the moist burrows of the crayfish and spend almost six months in hibernation often partially submerged in water below the frost line on the wilder side of Oakland County. 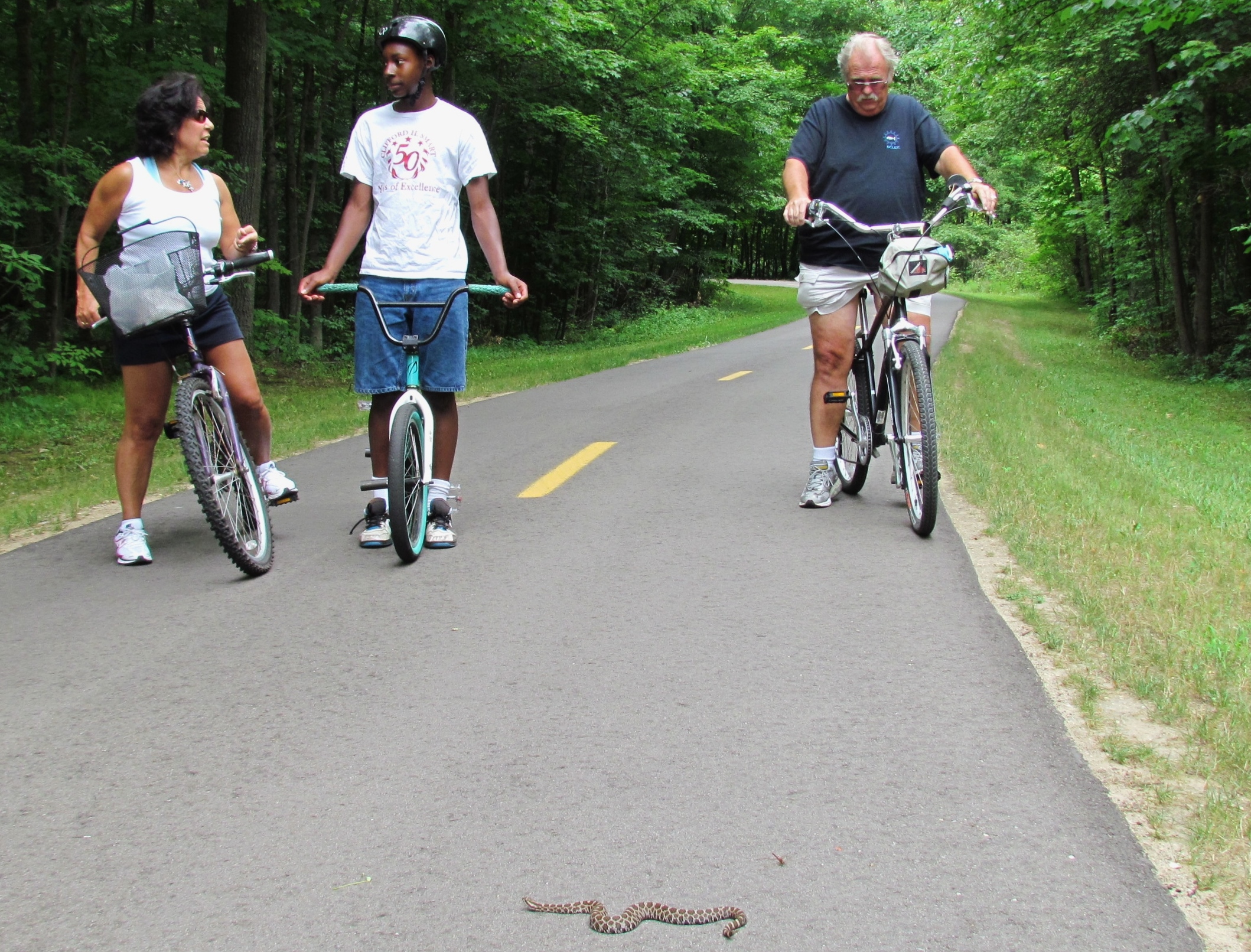 Video courtesy of the Michigan Department of Natural Resources.

Visit DestinationOakland.com for information on all 13 Oakland County Parks.