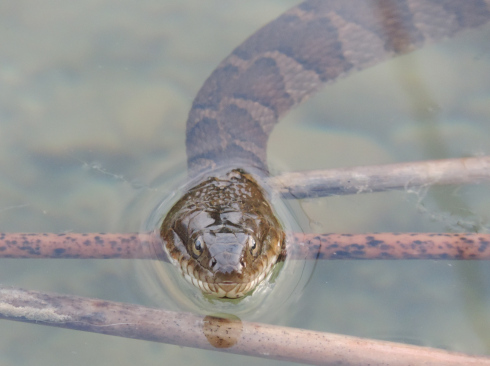 Wetlands, swamps, marshes and lakeshores of Oakland County are the perfect habitat for the northern water snake, a darkly colored semi-aquatic carnivore that forages along the water’s edge for prey.

The northern water snake (Nerodia sipedon) is often mistakenly called a “water moccasin,” a venomous snake of southern swamps named after the shoe it resembles.  Frogs, fish, tadpoles, crayfish, baby muskrats, small birds and even turtles comprise much of the diet of this seemingly always hungry hunter of the Wilder Side of Oakland County.  There is nothing shy about the behavior of this thick-bodied, non-venomous snake that can be three feet long and eats its prey alive. And sometimes, their behavior is unpredictable.

A chance encounter with a very large northern water snake sunning on a log near the edge of a hiking trail at the Highland State Recreation Area left me stunned.  Normally, there is nothing surprising or stunning about a snake soaking up heat from the sun on a cool morning, for that is the way of reptiles. But what drew my attention, and that of my fellow hikers, was a very small painted turtle sunning itself not just next to, but resting against the side of the water snake. Look closely at the picture below. The turtle had positioned itself for maximum sunlight alongside a species that eats baby turtles. 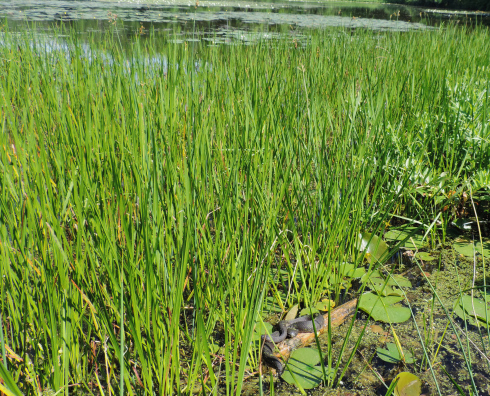 It was not until I was home and studied the images on the computer that a theory of what may have led to this stranger-than-fiction encounter slowly emerged. I sent the photos and my theory to two herpetologists for their input. Jim Harding (Instructor and Outreach Specialist of Zoology- Expertise Herpetology, Michigan State University), and Brad Chambers (Curator of Snakes at Center for Reptile and Amphibian Propagation, Texas), agreed that the circumstantial evidence and facts of snake and turtle behavior support the theory that the photo was not a matter of “best friends forever” between predator and prey.

Theory behind the encounter: Shortly after sunrise, the northern water snake emerged from the water and found a position of comfort on the log to receive maximum sunlight. Not long afterwards, a painted turtle pulled itself out of the water and onto the same log, completely unaware of the snake’s presence and the clear danger it would normally present. The moist duckweed (the tiny green plants) on the bodies of both reptiles supports the time frame.

The young turtle then positioned itself to catch the morning rays of the sun, which meant partially climbing onto the object on the log: the northern water snake. The snake did not respond, and the clue as to why was in the eyes of the snake; they appear hazy, which indicates that the snake is about to molt or shed its skin. During this period, the snake’s vision is impaired and behavior can become unpredictable; thus, the snake has less ability or desire to hunt. It had no interest in the turtle and the turtle was not about to leave a perfect sunning location. 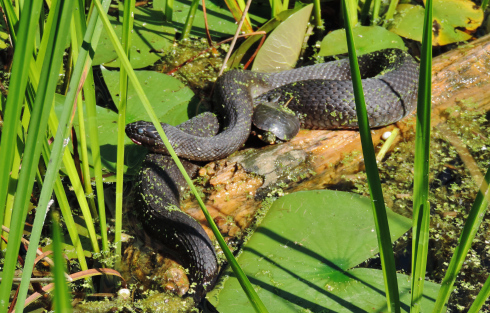 The hazy eye of the log-sunning snake indicates shedding is about to occur.

Northern water snakes are opportunist hunters and will even take small fish off of stringers and out of wire holding baskets, as seen below. It is likely the next encounter between the two log-sunning reptiles may end very differently, for that is nature’s way on the Wilder Side of Oakland County. 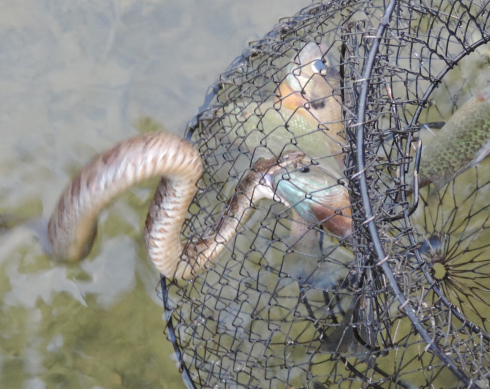 This bold northern water snake is not shy and attacks fish in a wire basket at Seven Lakes State Park.