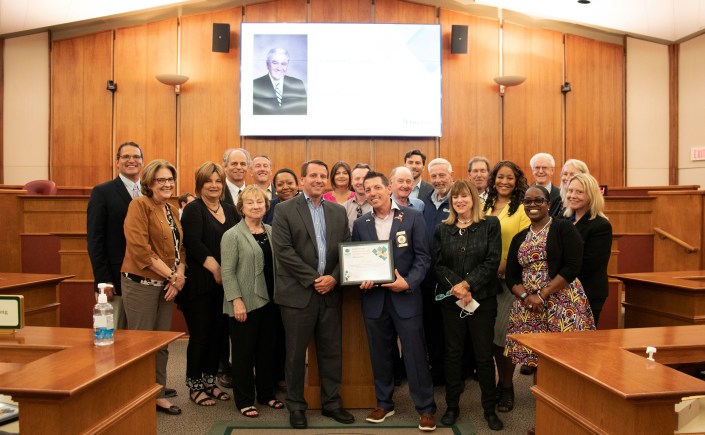 60 is the new 50. Maybe it’s that 80 is the new 70. Either way, ideas about gray-haired people spending their days in rocking chairs are on the way out, and older adults are earning a new reputation as active and involved community members.

In honor of Older Americans Month, 12 community members were recognized by the Oakland County Board of Commissioners with 2022 Oakland County Outstanding Older Adult Awards. The program, spearheaded by Commissioner Kristen Nelson (District 5), was designed to highlight Oakland County residents 60 years and older who demonstrate a passion for volunteerism and community service. Commissioners were invited to nominate a resident from their district for this special award program.

Nine of the recipients attended the Oakland County Board of Commissioners meeting to accept their award in person and were given the opportunity to address the Board and say a few words about their community engagement. Awardees include:

“The individuals who were honored have gone above and beyond in each of their respective communities, offering their time, leadership and wisdom. Their contributions, whether they be large or small, make a difference in their neighborhoods, their cities, townships or villages and the county overall. We should all be grateful to neighbors like these who selflessly give of themselves to improve the lives of others.”

To keep the celebration going, each recipient was featured individually on the Board’s Facebook page following the meeting. Each honoree was highlighted with a summary of why their commissioners nominated them for the award.

President John F. Kennedy first established May as Senior Citizens Month in 1963 in a meeting with members of the National Council of Senior Citizens. It later became known as Older Americans Month, and every president after Kennedy has issued a formal proclamation asking the nation to pay tribute to older persons in their communities. Inspired by this, the Board was happy to create its own way to recognize some of the many selfless, dedicated neighbors and friends age 60 and older in the county.