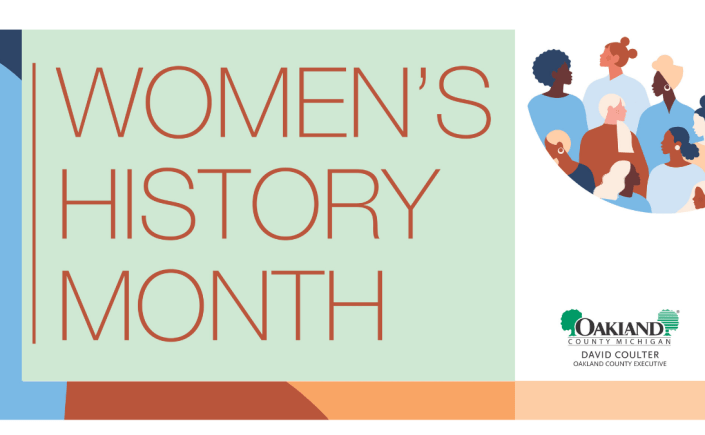 March is Women’s History Month, a time to celebrate trailblazing females from the past, present, and into the future. This month, we’re recognizing women on Oakland County‘s senior leadership team, along with directors from various departments who are making sure that the county is All ways, moving forward.

Hilarie Chambers made history as the first woman to serve in her role as Chief Deputy Executive when she was appointed in 2019. She was chief of staff for retired Congressman Sander Levin for over 25 years. Before joining Oakland County’s executive office, she served as chief of staff for Michigan Secretary of State Jocelyn Benson. A strong advocate of adult literacy and workforce development, Hilarie is also the founder of a nonprofit that provides free ballet classes to girls at the Hazel Park Recreation Center.

April Lynch oversees the county’s Human Resources, Corporation Counsel, Risk Management, and Facilities Management departments. In 2011, she began working as city manager of Ferndale, collaborating with Executive Coulter, then mayor, to resolve long-standing issues and bring many innovations to the city. Prior to joining the county, she served as associate vice president of human resources and payroll at University of Detroit Mercy.

Robin Carter-Cooper works to foster a diverse, equitable and inclusive workplace for county employees. She launched the county’s Equity Council, has provided training to leaders and has initiated a workplace culture and an external audit since joining the county in 2020. Crain’s Detroit Business honored her in 2019, naming Carter-Cooper among its “Most Notable Women in Education Leadership.” She previously worked as the executive director of diversity, equity and inclusion for Rochester Community Schools.

Fisher previously served as the vice president of marketing and communications for the Detroit Economic Growth Corporation. Her background includes working at General Motors and Ford in the U.S. and Asia, as well as managing her own agency. She began her career as a print and broadcast journalist.

Fisher has a Bachelor of Arts degree in journalism from Michigan State University and a Master of Business Administration degree from the University of Michigan.

As director of public services, Barb Hankey brings performance-based leadership to ensure equitable county services are being delivered to residents and Oakland County’s strategic goals in public safety and criminal justice reform are being achieved.

Hankey, who is the first woman to lead the department, has over three decades of experience in working with justice-involved individuals. She began her career in Oakland County as a pretrial investigator in the county’s Pretrial Services Division in 1988. After five years, she became the chief probation officer for 52-4 District Court in Troy. She returned to Pretrial Services as a supervisor in 1996. Then she moved over to Oakland County Community Corrections Division as the chief of field operations from 1998 until 2001 when she became manager of the division. She served in that role for two decades.

Diana “Dee” McBroom began her career in politics and public service in her mid-twenties, working for Congressman Sander Levin on his re-election campaigns and as the director of his Michigan office. After 10 years, she left public service to earn her law degree from Wayne State University, graduating at age 40. In private law practice, she focused on professional, fiduciary, and regulatory liability litigation. Starting in 2009, she directed the Michigan office of newly-elected Congressman, Gary Peters, for four years.

Prior to joining Oakland County in 2021, she operated her own public affairs consulting firm for eight years and owned a small trucking operation in Texas. Her varied professional experiences make her well-suited to her current role. She’s never shied from a professional challenge, even when the path she followed was unconventional, and believes it is never too late  to pursue your passions. Her entrepreneurial and public service experience has provided a unique perspective on the interplay between government and business.

As the Health Officer for the County, she has lead a team who built and maintained significant partnerships across county sectors that resulted in swift and efficient COVID-19 case investigation, contact tracing, testing and vaccination processes.

In addition to her outstanding work during the pandemic, she has demonstrated superior leadership in new public health initiatives to Oakland County to ensure the public’s health and safety. In February 2020, Stafford was instrumental in launching Oakland Health 360, a transformational expansion of health care and support services in Oakland County support residents who are uninsured or underinsured.

Ingrid Tighe utilizes her background in economic, community, and workforce development to contribute to the county’s continued growth and success. Tighe has led business development and workforce initiatives for the State of Michigan at both the Michigan Economic Development Corporation (MEDC) and the Michigan Veterans Affairs Agency. She is a strategic planner and collaborative manager with a strong network of relationships around the state.

Tighe also served our nation in combat as a captain in the U.S. Army. She has a master’s degree in public administration from the University of Michigan and a bachelor’s degree in communications and German from Vanderbilt University. Tighe is also a certified Economic Development Finance Professional by the National Development Council. She is a member of the Iraq and Afghanistan Veterans of America and Veterans of Foreign Wars.