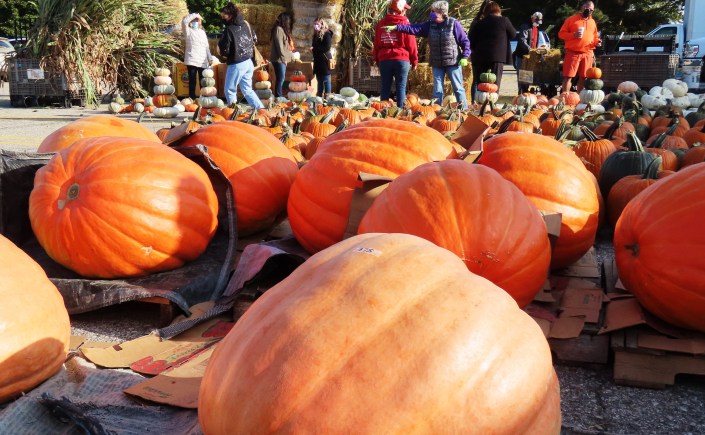 Halloween is just around the corner and one very recognizable sign of the season is everywhere. Pumpkins are transforming into an incredible array of spooky jack-o-lanterns that perch patiently on porches, waiting to delight masked goblins, witches, and superheroes. Others wait to be chosen from roadside stands, and hundreds more, of every conceivable size, are for sale at the Oakland County Farmers Market. Grocery store displays of pumpkins are placed strategically near the door to draw attention, almost as if they are pleading, “Pick me! Pick me!”

Three words say it best: pumpkins, pumpkins, everywhere. A glacial boulder that has its permanent home in front of Lake Orion High School has joined in the salute to the season, having been temporarily turned into a mighty pumpkin that grins at incoming students, bringing smiles even on overcast October days.

Thousands of other pumpkins remain in Oakland County fields and have already been coated with frost in the dawn’s early light. Some of those field pumpkins have been repurposed into scarecrows and car mechanics. Any pumpkins left abandoned in fields at the end of season won’t go to waste. Many will be consumed by deer and other smaller creatures of the wild, and others will be plowed back into the earth. If you cut your pumpkin in half and place it outside, it won’t take long for squirrels, chipmunks, and birds to feast on the seeds and the fleshy innards.

As I write these words in the third week of October, I am sipping on my first pumpkin spiced latte of the season and dreaming of pumpkin pie. But I also have shocking news for you: botanically speaking, there is no such thing as a pumpkin.

That’s right, pumpkins don’t exist. My cherished pumpkin latte is actually flavored with squash. That’s where this twisted wilder side tale of pumpkins, squash, and gourds really begins, in an effort to set the record straight. The fact of the matter is clear: not all gourds are squash, but many squashes are gourds, and a pumpkin is both a squash and a gourd. Confused? I was too. Real confused.

Pumpkins, squash and gourds are members of the enormously diverse Cucurbitaceae family, which contains more than 100 genera and over 700 species. They have been providing mankind with food and utilitarian objects since before recorded history. Various members of the genus Cucurbita are known as squash or gourds.

Names differ throughout the world, but in the United States, any round, orange squash used for pies or jack-o-lanterns is likely to be called a pumpkin. But the term “pumpkin” really has no botanical meaning, as they are actually all squash. Squash are divided into two categories: tender or summer squash, and hard-skinned or winter squash. Examples of summer squash include zucchini, pattypan, straightneck, crookneck and other types. Winter squash include small to medium hard-skinned squash such as the acorn, small hubbard, miniature pumpkin and spaghetti types, as well as the large hard-skinned types, including banana, butternuts, cheese pumpkins, cushaws, and large hubbards, among others.

Even when those facts of botany are established, acknowledging that our beloved pumpkin is “just a squash,” we can still celebrate the incredible array of strangely shaped, often lumpy gourds and unusual looking squash that can be found in a dazzling kaleidoscope of colors at roadside stands. I certainly don’t want to take the fun out of this year’s bountiful pumpkin harvest that is in many ways, a salute to the family farms of Oakland County. So here’s the rest of this fact-establishing story that confirms autumn is fading as quickly as pumpkins are moving onto center stage all across the county.

Contrary to the fact that pumpkins are often looked at as a seasonal vegetable, and a rather delightful one at that, they are not vegetables at all, but are in fact the fruit of the pumpkin vine. To clarify a bit further, a fruit is a ripened flower ovary that contains seeds, and since pumpkins are heavenly-rich with seeds, they are a fruit. Vegetables, on the other hand, are the edible portion of plants, such as leaves, stems, roots, and bulbs. Three common examples are carrots, onions, and asparagus.

However, with Halloween just around the corner, we can put aside the classification facts and focus a bit on the abbreviated history of pumpkins, which goes back almost 7,500 years. Archaeologists discovered the oldest domesticated pumpkin seeds in the Oaxaca Highlands of Mexico. Those pumpkins bore little resemblance to today’s fruit, and were one of the earliest crops grown for human consumption in North America. Those pumpkins however, just like todays, were ideal for storing in times of scarcity. Click here for more on their history and palate pleasing recipes from PBS.

Pumpkins, as we now know, are a type of squash and are considered such by North American indigenous cultures where pumpkins were grown alongside corn and beans as one of the three sisters of agriculture. Historical records confirm that the orange squash we call a pumpkin became a survival food of the Pilgrims. Early settlers used them in a wide variety of recipes, from desserts to stews and soups. The origin of pumpkin pie is believed to have occurred when colonists sliced off a pumpkin top, removed the seeds, and then filled it with raw milk, honey, and spices. There was no fiddling around with temperature settings on an oven. Their hollowed-out pumpkin pie was baked amidst the hot ashes and embers of a dying fire. I just may have to try that technique on a late autumn camping trip.

For the rest of this month, coffee shops will be filled with the aroma of pumpkin spiced lattes and families will continue to meander the Oakland County Farmers Market in search of perfect pumpkins for pie creations, or to carve into scary-faced, porch perching pumpkins. The indoor section of the market includes an amazing selection of decoratively-carved gourds, and that alone makes it worth a visit. There is no denying the fact that pumpkins will continue to reign supreme well into Thanksgiving and beyond, for this is the season of, “pumpkins, pumpkins, everywhere.” Want to learn more about the wonderful world of pumpkins? Click here and then head out to pick your pumpkin, even if in reality, it’s just a cultivated orange squash.

One thought on “Pumpkins, Pumpkins, Everywhere!”