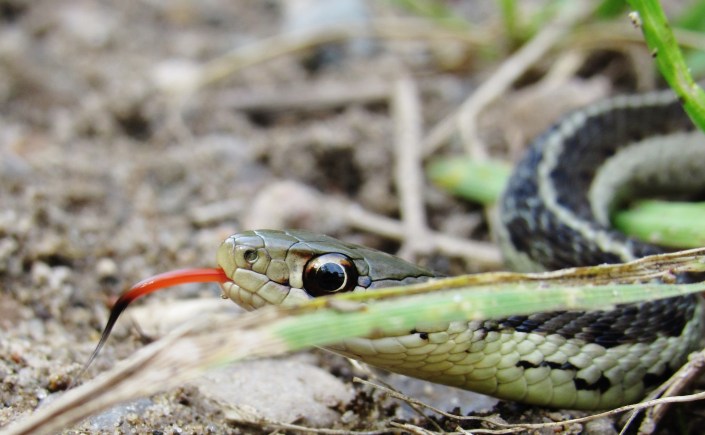 “The wild requires that we learn the terrain, nod to all the plants and animals and birds, ford the streams and cross the ridges, and tell a good story when we get back home.” That is perhaps my favorite quote from Gary Snyder in his celebration of the ways of nature in The Practice of the Wild (Snyder, 1990).

I have friends who revel in Snyder’s words. They share stories of wildlife encounters with excitement and joy. However, when it comes to sharing encounters with snakes, sometimes their words and phrases confirm their extreme anxieties and near-phobic horrors of even seeing a snake. These colorful days of October remind us of winter’s approach. That means, it’s time to share snake facts with a disclaimer: although I am not a herpetologist by any means, I am an unabashed partisan of these slithering creatures that often take center stage for a few weeks during the season of leaf fall. Perhaps you are too.

Snakes are ectothermic creatures, meaning they rely on external sources of heat to provide adequate warmth to stay active. Those days are quickly dwindling, but on sunny October days, snakes are sometimes spotted basking on sun-warmed trails. To set the record straight, I captured most of the images that appear in this blog during the closing days of September or first few weeks of October, over the past three years.

As October cools down, snakes slither – a phobic-stirring word for some – to locations where they practice the lethargic state of brumation, the snakes’ version of hibernation. During brumation, most snakes head into underground spaces below the frost line, under large downed logs, or even into building foundations if a tiny crack can be found. That winter habitat is called their hibernaculum.

Michigan has 18 species of snakes. For natural history briefs that include 60 second videos for each species, visit the Michigan Department of Natural Resources‘ “Sixty Seconds Snakes” link on YouTube. Today’s Wilder Side ramble shares facts about eight species of snakes that live in Oakland County. Six are common, two are not.

The most commonly seen snake of Oakland County is the Eastern Garter Snake, which is often erroneously called a “garden snake.” It’s easily identified by three light stripes that run the entire length of its body. The snake earned the name, “garter,” because its stripes bear a resemblance to “garters,” which are bands once commonly worn around the leg to hold up stockings or socks. Garter snakes are found everywhere in the county and feed on worms, frogs, crayfish, and as my photo confirms, an occasional small bird. A garter snake’s forked reddish tongue, which flicks about to gather information, adds colorful contrast to its greenish body. Garter snakes are sometimes confused with ribbon snakes; however, ribbon snakes are generally more slender with more distinct striping along their bodies.

It’s not easy at a glance to differentiate ribbon snakes from garter snakes, but a closer look reveals ribbon snakes have bright, yellowish stripes down their backs and on each side, whitish chins, and whitish-yellow bellies. I had the good fortune to photograph one sunning on a paved section of the River Loop Trail at Independence Oaks County Park before it quickly slithered off to the side at my approach and vanished into the shadows amidst a sea of colorful fallen leaves. That marshy habitat along the trail is ideal for ribbon snakes since when not basking, they are near water hunting prey, a risky endeavor since they may fall prey to migrating shorebirds, such as Great Blue Herons.

The Northern Water Snake is a very common snake and as the name indicates, they are almost always found near or in water. Although temperatures are falling rapidly, they may still be spotted sunning on partially submerged logs. I encountered a juvenile water snake last fall in the second week of October along a utility corridor in northern Oakland County. When I knelt to take a photo, the snake struck out towards me. I shared the photo with my herpetologist friend, Jim Harding, an Emeritus instructor at the MSU Department of Integrative Biology. He responded, “water snakes have immediate attitude.” I agree, and on more than a few occasions, I’ve had residents send me photos of large water snakes accompanied by misidentification comments, including that they saw an “aggressive” water moccasin, a venomous species, or a species not found in Michigan. Although water snakes readily display defensive behavior, they are non-poisonous and focus their attention on frogs, fish, and small mammals.

“If you don’t want a mouse in your house, you want a milk snake.” I smile when I hear comments like that, for there is truth to it. Milk snakes derived their name because they were historically spotted in dairy barns, and at one time farmers thought they were after the milk. They were not. They love mice. My best photo of an adult milk snake occurred a few winters ago when I noticed something moving in my partial stone foundation basement. When I turned on the light, that something turned out to be a large milk snake. I captured a few images as it slithered under storage boxes and was never seen again. The following spring, I photographed a milk snake emerging from a hole in the ground just a few feet from my house’s foundation. Here’s how the Michigan Department of Natural Resources describes this beautiful snake:

“This is a slender, smooth scaled snake with reddish or brown blotches on a gray or tan background color. There is usually a light “Y” or “V” shaped marking just behind the head. The belly is white with a black checkerboard pattern. Adult length: 2 to 4 feet.”

They are found in a variety of habits, including rocky hillsides, fields, farm lands, inside old barns, and — my basement.

I’ve never had a camera handy during a Brown Snake encounter, so I contacted my snake-wise herpetologist friend, James Harding, for photos of this seldom seen, tiny snake that he graciously provided. He also wrote:

“They are very secretive species that stay underground much of the time, and are most often seen after heavy summer rains or on warmer fall days. Their diet consists of mostly earthworms, slugs, and snails, and their teeth and jaws have specialized modifications to extricate snails from shells. The Red-bellied Snake is closely related and has similar adaptations.”

I was happy to see he included that last sentence, because just two weeks ago, I photographed a Red-bellied Snake slithering slowly across a sun-warmed trail.

Red-bellied Snakes are small, slender snakes that feed on earthworms, slugs, snails, and the larvae of beetles. These small, rather passive snakes are easily recognizable by their uniformly scarlet or red-orange bellies, and three light blotches immediately behind their heads. This one kept flicking its tongue as I struggled to position it for a photo of its colorful belly. As long as days are sunny and relatively warm, Red-bellied Snakes may be seen passively sunning one last time before frost hardens the Earth.

The Eastern Massasauga Rattlesnake is Michigan’s only venomous snake. Oakland County remains a stronghold for this rather timid snake that is found in many of our Huron-Clinton Metroparks and Oakland County Parks. I feel extremely fortunate to have photographed them twice, both times in early autumn. The first time was when one was sunning in late September on the paved hike-bike trail at Indian Springs Metropark. My second encounter was three years ago this week at Independence Oaks County Park near the Camp Wilderness parking lot. It “buzzed” its “rattle” since it was not pleased with my close presence after I laid down on the ground about six feet away to film it.

Massasauga rattlesnakes feed mostly on mice and voles. As winter approaches, some will wiggle under masses of tree roots in swampy habitats, while others will slither down crayfish burrows where they will spend the winter partially submerged in water.

The chances of seeing an Eastern Hognose Snake in Oakland County is very low, but they thrive in other parts of Michigan, especially near sandy areas and along the northwest corner of the Lower Peninsula. These heavy-bodied, voracious consumers of toads are masterful bluffers. When feeling threatened, an Eastern Hognose snake will coil, flatten its head and neck to form a cobra-like hood, inflate its body, hiss fiercely, and bluff strike forward in a violent, but harmless manner. If that act does not work, it’s time to jerk convulsively, roll over on its back, stick out its tongue, and play dead. I was lucky to film that, “leave me alone, I am dead!” routine on South Manitou Island while working as a Lighthouse Keeper for Sleeping Bear Dunes National Lakeshore. A coworker spotted a juvenile hognose snake that was in imminent danger of being squashed by construction equipment and scooped it up to move it to a safer location. Seconds later, the show was on. Watch and listen here!

It’s the perfect time for an October hike with a friend with eyes out for snake encounters and perhaps, as Gary Snyder penned, “…and tell a good story when we get back home.”