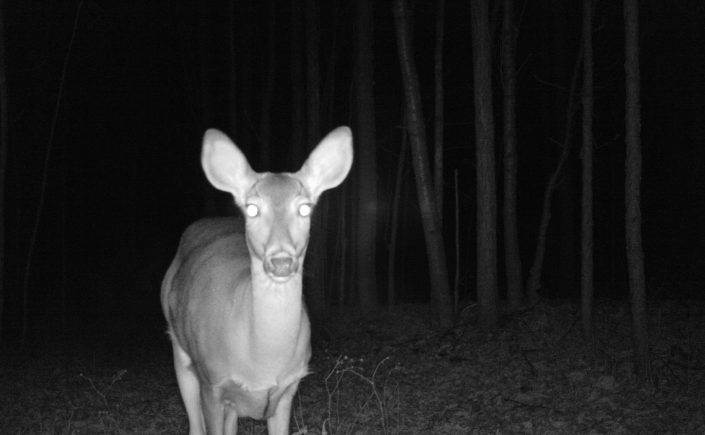 We may think they are strangers in the night, but when the sun goes down and night shadows dance, a nocturnal cast of nature’s characters appear. They are not strangers in the night, but under the cover of darkness, dramas of life and love, predator and prey and human avoidance go on. If I was to select just one species that increases activity by leaps and bounds at night, and sometimes trips my concealed motion-activated trail cameras, it would be our eastern coyotes. They inhabit every corner of our county and their yips and howls sometimes stir Facebook chat rooms into phobia-creating chatter resembling, “The coyotes are coming! The coyotes are coming!”

Contrary to Facebook posts, there has not been a sudden influx of coyotes. We are just more aware of them because of their winter night yips, tracks in the snow and occasional daylight sightings. Coyotes are chiefly nocturnal and have adjusted their behavior to adapt to our ways. They generally avoid us, but they have failed to avoid my camera traps and I’m happy to know I share their landscape. My cameras have captured them from dusk to dawn. During these early days of March, as breeding season winds down, they patrol their territory and of course look for things to eat, with rabbits being a favorite entrée in the waning days of winter. I was happy last month to document a pair of coyotes traveling together as they patrolled the edge of my marsh. The cameras also revealed that they have regular, well-trodden travel routes, routes that are also used by white-tailed deer, raccoons, opossums and rabbits. My cameras have captured them in many behavioral stances: nose to the ground, leaping over logs, listening for activity and even in hot pursuit.

Eastern cottontail rabbits are a preferred moonlight menu item for Great Horned Owls, red foxes and of course, eastern coyotes. Life for rabbits is fast and furious, but enough of these prolific creatures survive winter to breed in spring. There is plenty of low vegetation and tender young staghorn sumac bark to feed on during winter, but life can be risky when the night shadows dance. That’s when they become easier prey for their predators. Every now and then, my camera captures one motionless in the moonlight, perhaps trying to be hidden in plain sight. I suspect with their excellent sense of smell and keen eyesight, coyotes know if it’s worth their time to scan the snowy fields for a motionless meal. One camera captured a sequence of a rabbit passing by and a coyote sniffing the trail minutes later. I wonder how that encounter of strangers in the night ended.

Red foxes are active during all seasons with most activity taking place at night, but like the coyote, they are occasionally seen during daylight. They thrive in Oakland County, especially where fields and meadows meet woodlands, as well as at the edge zone of our major trails where they have little to fear except for coyotes. I’ve only captured a fox on trail camera images twice, both times within a few hundred feet of my house. Last winter, my trail camera captured a red fox with the remains of a rabbit right in my rural driveway, about 50 feet from my birdfeeder. Tracks in the snow and small blood splatters told the story. The rabbit had hopped from shrubs to the bird feeder to scrounge on spillage. That’s when the stealthy fox rushed in for a meal, a reminder that human actions often alter the behavior of creatures in ways not expected. The camera showed the fox wandering back up my driveway, most likely with a full belly.

White-tailed deer are without a doubt one of the most commonly seen mammals in Oakland County, and are the creatures that most frequently activate my cameras when night shadows dance. Their activity accelerates at twilight, especially in the more rural and wooded areas of our county. They physically prepared for the winter by “trading” their summer hair coat for a winter overcoat made up of hollow guard hairs, which repel snow, absorb heat from the sun, and trap heat that escapes through the undercoat.

Although this winter has been mild and lacking in substantial snow, they followed their typical winter behavior of both creating and following well-travelled routes, a way to conserve energy. White-tailed deer are well adapted to living in our midst and adapt to conditions they find and sometimes seem to pose for my cameras. Just last week, a homeowner sent me a short clip from her security camera of a buck browsing on shrubs at her front door.

Opossums, the only marsupial (pouched mammal) of North America, occasionally appeared within range of my cameras, mostly on relatively warm winter nights when the temperature was above the freezing mark. Although opossums are chiefly nocturnal, they are poorly adapted to extreme cold. Their hairless ears and prehensile tail are susceptible to frostbite. They do not hibernate, but spend much of the winter in their dens and will occasionally be spotted in daylight on sunny winter days foraging for food. With those facts in mind, I suspect their night forays are limited, and they, like the rabbits that appeared near my house, were most likely in search of spilled bird seed to scavenger. One of my stranger photo captures was of an opossum apparently travelling on a woodland trail in the accompaniment of a feral cat. Definitely not strangers in the night.

Raccoons are omnivorous masters of survival and seemed rather unperturbed by the see-saw weather patterns of last month. They scrounge on old frozen fruits and berries, and if they can find a dead rabbit, mouse or other carrion under the snow, it’s an all you can eat buffet. Trash day is a delight when neighbors put trash out the night before in non-secure containers. Most of the tracks I found rambled about near my marsh, perhaps hoping for early emerging frogs and other wetland treats. Others have activated a camera in my woods near trees with hollows, good places to set up spring house-keeping.

One raccoon even tripped a security camera on my porch as he, or she, explored an old cooler I left there. Perhaps it was time for a picnic.

One thing is certain as spring draws near. The cast of characters that perform on our woodland and wetland stage becomes more numerous and active when night shadows dance, for that is nature’s way on the wilder side of Oakland County. And sometimes, the actors pass by the same location just minutes apart, as was the case with this raccoon, rabbit and coyote, with at least two out of three wishing to remain strangers in the night.

2 thoughts on “When Night Shadows Dance”