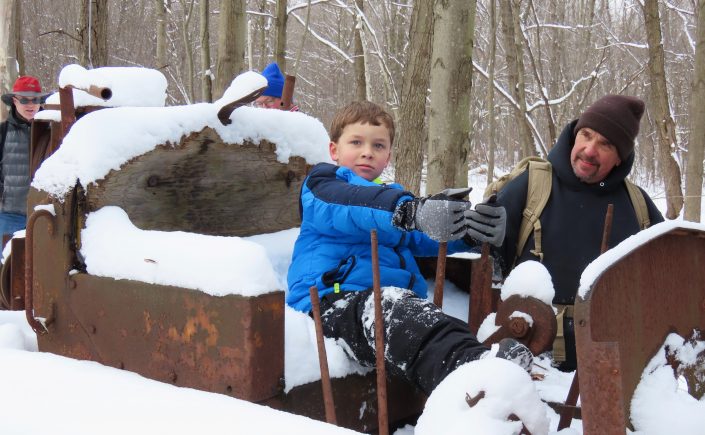 Hiking with Boy Scouts is never a quiet event. It just does not work out that way. And if the hike is an off trail adventure in “the boonies” of a snow-covered hardwood swamp, with each footstep crunching in snow or crackling over partially frozen puddles, you can be assured every deer and coyote will flee at the not so stealthy approach. Extremely fresh tracks in the snow confirmed my assumptions that our intrusion was quickly detected. But before I share this tale of an adventure like none other I have been on in my three decades in our county, I will mention Sammy, the six year old that hiked with us. He was quiet most of the time and very proudly crossed tiny creeks with a bit of parental help and was attentive to the surrounding landscape. His moment of pure joy was climbing up onto the seat of a rusted bulldozer that held half century old secrets about a peat harvesting operation in Oakland County.

This hike was special to me for several reasons, with perhaps the most important reason being it took me through a section of the 5,430 acre Ortonville Recreation Area in northernmost Oakland County that I was totally unaware of, a section with no trails. And so when Scout Master Jeff Hanft of Ortonville Troop 139 invited me to join them on their “boonies” hike to a secret hardwood swamp that harbored a former peat harvesting operation, I was all in. I arrived at our designated meeting point at Big Fish Lake early enough to chat with Hanft about the hike and get my hot dogs on the fire before others arrived.

Scouts from Davisburg Troop 192 and Lake Orion Troop 128 joined the Ortonville Troop, as did Sammy, a cub scout from West Branch who is the energized nephew of Hanft. After all hot dogs were consumed it was time to trudge off into the boonies and enter the land of the unknown – at least for me – near the southwest corner of Big Fish Lake.

Within a few minutes of starting, I already knew I would come back for another hike into the stillness of the swamp to listen to what nature had to say. But for this hike, I was just a participant armed with curiosity and my camera. Hanft briefed us on what lay ahead as we climbed over fallen logs, but he did not know that I would be fully distracted by all the surprises of nature that always captivate my restless mind.

Fifteen minutes of snow-trudging and creek crossing and one rather dramatic slip and fall on my part brought us to a “chipmunk forest.” That was not our destination. Perhaps I should clarify that there is, to the best of my knowledge, no such thing as a chipmunk forest, but the great carpet of club moss that surrounded us perhaps would be looked at by chipmunks as a forest to hide within. Club mosses are described in many different ways, but I like what Grand Traverse Journal writes: “Club mosses are not mosses, nor are they armed with clubs. They are small, however – only a few inches high on average – and are easily missed by hikers and those out for casual walks in the woods. Like mosses, they reproduce by spores, but, unlike them, they have vascular tissue to transport water from the roots (like flowering plants).”

As I knelt to photograph the club moss poking up through the snow I was asked by an adult participant what I was doing. I explained briefly that club mosses are among some of the oldest living plants on Earth. Their ancestors were far more tree-like and were over 80 feet tall. I also added that they are sadly becoming less common in many areas since they are sometimes gathered as attractive green Christmas decorations, an illegal practice on State lands in Michigan. After the hike I did an internet fact-checking search and discovered that in the days before modern flash photography, early black and white photographers would ignite club moss spores to create a brief burst of light to enhance their photos. Apparently the spores contain traces of a natural oil which instantly catch fire when lit and flash over almost as in the same fashion that flour dust ignites and flashes in grain elevator explosions.

As we hiked on I noted small things of wild nature, especially the abundance of tree fungi that cradled snow from the day before. A birch polypore fungi on the side of a tree confirmed the weather forecast was correct and five fresh inches of snow had fallen. Although the small things of nature kept drawing my attention, and will lure me back for my hike of solitude and stillness, the real excitement began when we reached the remnants of what was once the peat harvesting site.

Peat is common in many parts of our state with Oakland County being no exception. Peat is essentially decayed vegetative matter that has been partially carbonized and decomposed over thousands of years in low areas of the land where sedges, moss and shrubs thrived in our glacially sculpted landscape. As decades passed, each new layer of vegetation buried the old. The US. Geological Survey (USGS) summarizes the numerous uses of peat this way:

“Peat has widespread use as a plant-growth medium in a variety of horticultural and agricultural applications because its fibrous structure and porosity promote a combination of water-retention and drainage. Commercial applications include potting soils, lawn and garden soil amendments, and turf maintenance on golf courses. In industry, peat is used primarily as a filtration medium to remove toxic materials from process waste streams, pathogens from sewage effluents, and deleterious materials suspended in municipal storm-drain water. In its dehydrated form, peat is a highly effective absorbent for fuel and oil spills on land and water.”

The peat harvesting operation that took place in the 50s in what is now part of Ortonville State Recreation Area apparently used tractors to scrape the peat from the surface of the boggy areas and conveyors to load it. We noticed ditches that appear to have been used to help drain the land. We meandered about the abandoned machinery trying to figure out what the function was of each machine and each piece of abandoned equipment. Old conveyors were still recognizable and one unknown contraption almost looked like a still but we suspect it had another function. The Boy Scouts became very excited when we came upon old cars in the woods without a hint of a road to get them there. The trees that grew around them appeared to be between sixty and seventy years old and had hidden the old access road.

Another thirty minutes of bushwhacking led us back to the park entrance road at which point tired Sammy was suddenly renergized and proudly took the lead as snow began to fall again. When spring comes and the land thaws and water flows freely, that trek will be all but impossible and leaves will once again hide this remote history-rich section of the wilder side of Oakland County.

2 thoughts on “Hiking the Boonies”