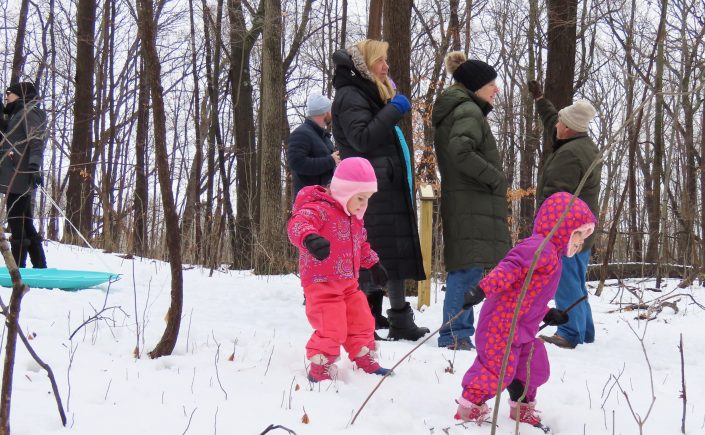 I almost did not attend. A gloomy overcast sky had painted the world in dreary shades of gray. The weather forecast suggested a cold drizzle of rain, not my favorite conditions for hiking or photography. I had all but decided it would be a miserable day for the hike being offered by the Hawk Woods Nature Center to explore “seasonal changes” and look for signs of wildlife. However I had promised my old friend Mike Mansour, the long-term naturalist at Hawk Woods that I would be there. And so I went.

I was wrong on all assumptions, except for the heavily overcast sky that no one seemed to notice. It was an adventuresome hike with happy people of all ages, accompanied by laughter and learning, a reminder that one need not wait for spring or sunny winter days to embrace nature’s way. The best part? There was a welcoming fire at the beginning and the event wrapped up with hot chocolate.

Hawk Woods is a natural treasure hidden away in plain sight, less than a half mile from the now defunct Palace of Auburn Hills. The entrance is on the west side of Bald Mountain Road just south of Dutton Road in an area some refer to as the heart of Oakland County’s Automation Alley technology district. The center is managed by the City of Auburn Hills and encompasses 80 acres of woodlands, ponds and marshes. And yes, hawks visit the site too, especially Red-tailed Hawks and Cooper’s Hawks.

Hawks were not noted during my visit, but a Turkey Vulture soaring overhead served as my welcoming party. Its classic V-shaped, raised wings spread and its long “fingers” at the wing tips confirmed its identification. Although vultures usually migrate in winter, our winter has been so mild that it’s easy for these raptors to find unfrozen carrion, their primary diet, and so they stay.

I noticed big changes since my visit last spring. A new 3,000 square foot lodge that is under construction will combine the functions of the old lodge and the former nature center building into one building. The new lodge is listed as a “multi-purpose facility which can be used for family gatherings, environmental educational programming, corporate team-building, training and social events” and has a tentative ribbon cutting planned for this coming June.

As I wandered over to the cluster of rentable cabins, I encountered Mansour as he gathered more branches to add to the welcoming fire. We chatted about our “old days” of nature interpretation, and the importance of casual presentations to accommodate all ages. Mansour greeted the gathering, chatted about the meandering interconnected trails and after reviewing the large trailside map with the group, we set off on the Woodland Trail that would take us through woodlands, past a creek and vernal ponds and down to a pond that lures in waterfowl in spring. Perhaps the most excited member of our group was the young girl being pulled on a plastic sled.

I’ve always been a fan of Liberty Hyde Bailey, a botanist and educator who was born in South Haven Michigan in 1858. One of Bailey’s best known quotes, “One’s happiness depends less on what he knows than on what he feels” played well into our hike. Mansour is an accomplished naturalist and educator and both of us understand that visible love for the land is far more important in a public program than rattling off of scientific names of flora and fauna to show what we know. Mansour’s love for the land was obvious as he pointed out wildlife tracks, differences in tree bark and chatted about the effects of our changing climate on flora and fauna and Hawk Wood’s offerings.

Just as I was about to step off trail for a closer look at a vernal pond that was not yet locked under ice, I was distracted by a cluster of turkey tail fungi on a decomposing log. Those aptly named fungi are a gem of winter woods and display colorful concentric rings not unlike the tail feather of wild turkeys.

Eye-catching interpretive signs are located along the trail, with my favorite one titled “Chemical Warfare,” a sign that takes on extra relevance in these early days of February, the breeding season for our eastern striped skunks. The text correctly states that the main two “enemies” of the skunk are cars and Great Horned Owls. Skunks are a common entrée for Great Horned Owls. Owls have a very poor sense of smell and are apparently unaware of the pungent stinging odor of a skunk when it sprays in self-defense. However, the keen eyesight and hearing of Great Horned Owls makes it easy for them to detect skunks searching for love in all the right places, romantic wanderings that sometimes have an unexpected end in the talons of an owl.

Wildlife, like people, often follow creeks and the creek at Hawk Woods seemed to be something of a wildlife highway with numerous tracks along its banks, including coyote tracks that looked to be to be just hours old. With a bit of practice, it’s easy to tell coyote tracks apart from dog tracks, especially with the fact that coyote paws tend to land one in front of the other and coyotes almost always walk in a much straighter and more purposeful pattern than an off leash dog. It’s also breeding season now for coyotes and, without a doubt, the habitat of Hawk Woods is a tempting sanctuary for these often maligned rodent-control experts. I smiled to myself when I noted that the coyote tracks near the creek intersected with the skunk tracks, but did not follow. Wise coyote.

It only took another 15 or 20 minutes to reach the pond, a site where nature’s symphony is nearly constant in spring with birds, insects and amphibians all playing their tunes. It was silent when we arrived except for a lone Blue Jay, but it was the perfect site to chat about invasive plants, especially the phragmites that encircled the pond. I would imagine that the clearing by the pond would also be a perfect place for an owl or hawk to wait for small prey, a reminder that in the world of nature all things are connected, yet nothing is constant.

As we wandered back to our starting point, with the youngest ones still energized and scurrying about, we talked a bit about the site’s history. It’s generally stated that the history of Hawk Woods began in 1837 when the Crawford Family moved to Oakland County and began homesteading on land deeded to them by President Andrew Jackson. However, the real history of Hawk Woods began about 12,000 years earlier as the last great land-crushing glacier slowly retreated, shaping a landscape of rolling hills, kettle lakes and tiny streams, a landscape that was favorable to the last mastodons to roam our county. Fast forward to 1990. According to the Auburn Hills Historical Society’s timeline, that’s the year the City of Auburn Hills purchased land from the Pontiac School District that became Hawk Woods Nature Center.

I am really glad I attended. The hike presented wild moments that exposed nature’s winter secrets, songs, cycles and creatures, but the very best part of the hike had nothing to do with the hike’s theme. It had to do with the young children that were with us. They found simplicity, magic and nature’s wonder on every one of our trailside encounters and that sort of excitement was contagious, even if one exuberant outburst of “Bear tracks!” was less than accurate.

2 thoughts on “A Winter Walk at Hawk Woods”