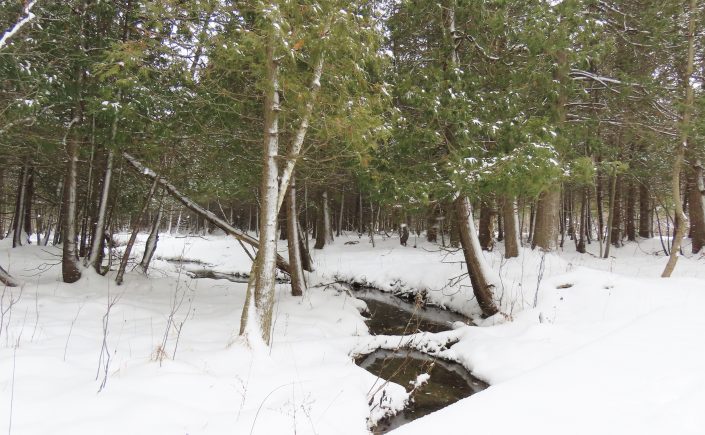 “A man is rich in proportion to the number of things he can afford to let alone.” – Henry David Thoreau

Simplicity, solitude and slowness of motion, spiced with a healthy dose of situational awareness are the core ingredients of some of my very best and most rewarding winter adventures. Every now and then I hike with a group, but my strong preference in both faraway mountainous wilderness areas or within Oakland County is to hike alone in silent solitude, or with a companion that appreciates the simplicity of solo hiking as the automatic “reset” button we often need in a busy world of work and distractions. 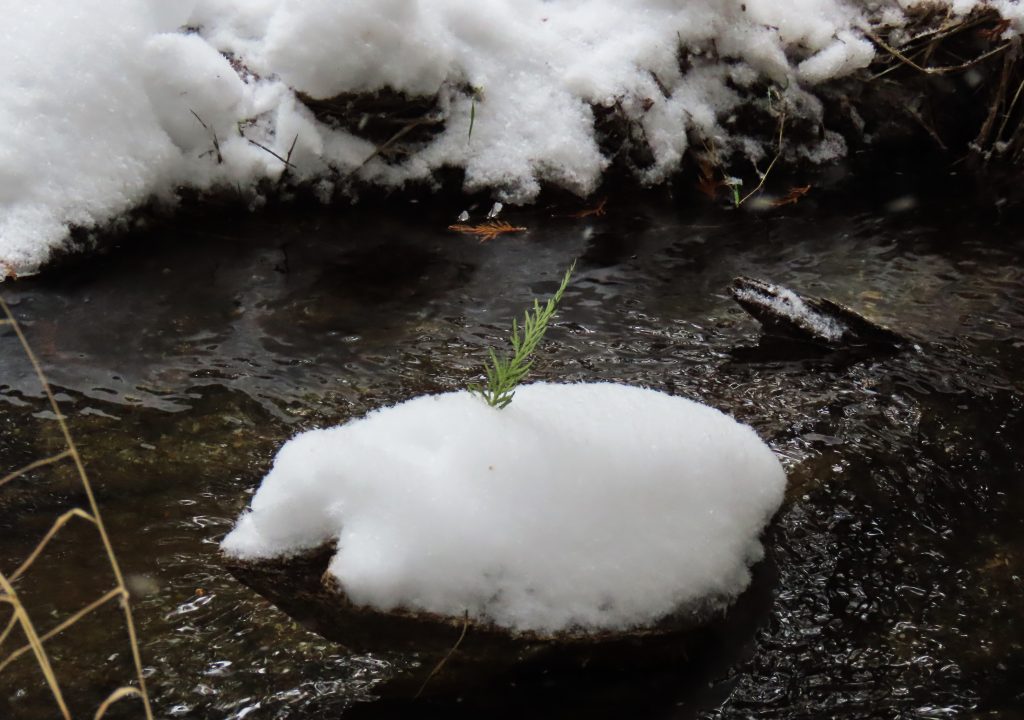 Following that practice enables me to listen to the ways of nature and reminds me, and perhaps you as well, that when hiking for pleasure the quietness and peace that follows a snowfall can be a magical, soothing and all too rare moment. Those moments are not difficult to find if you hike on a popular trail very early in the morning, or seek out primitive trails less trekked. Last Sunday, after a busy morning at the 2020 Fire and Ice Festival on the streets of downtown Rochester, I headed for trails less trekked at heavily wooded Oakwood Lake Township Park, an Oxford Township park that attracts disc golf fans in summer. In winter, however, it offers wildness for those that seek it. 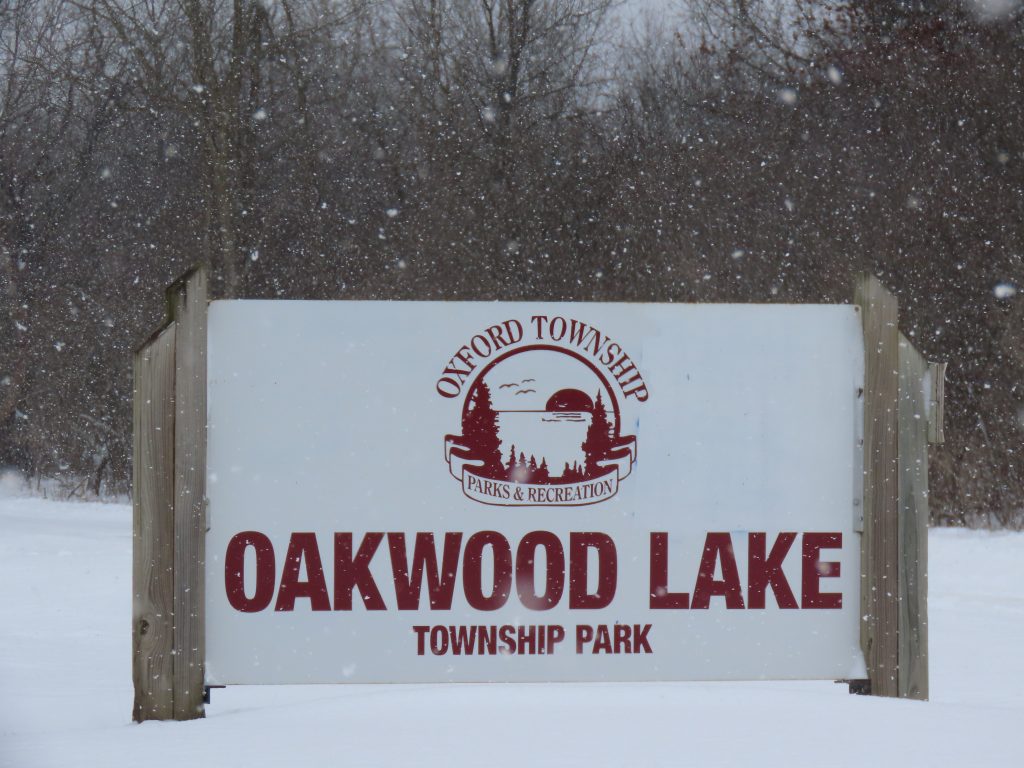 I arrived just as snow began to swirl through the woodlands. A lack of tracks in the parking area told me I would be the sole human amidst its surprisingly isolated 300 acres. It’s the kind of place where winter wanderers who walk or cross country ski slowly, stop often, and look and listen to the sounds and silence of nature, can “come into the peace of wild things.” That phrase is also the title of one of the best known poems of Wendell Berry, a poem that ranks right up there with memorable quotes from Thoreau.

THE PEACE OF WILD THINGS
“When despair for the world grows in me
and I wake in the night at the least sound
in fear of what my life and my children’s lives may be,
I go and lie down where the wood drake
rests in his beauty on the water, and the great heron feeds.
I come into the peace of wild things
who do not tax their lives with forethought
of grief. I come into the presence of still water.
And I feel above me the day-blind stars
waiting with their light. For a time
I rest in the grace of the world, and am free.” 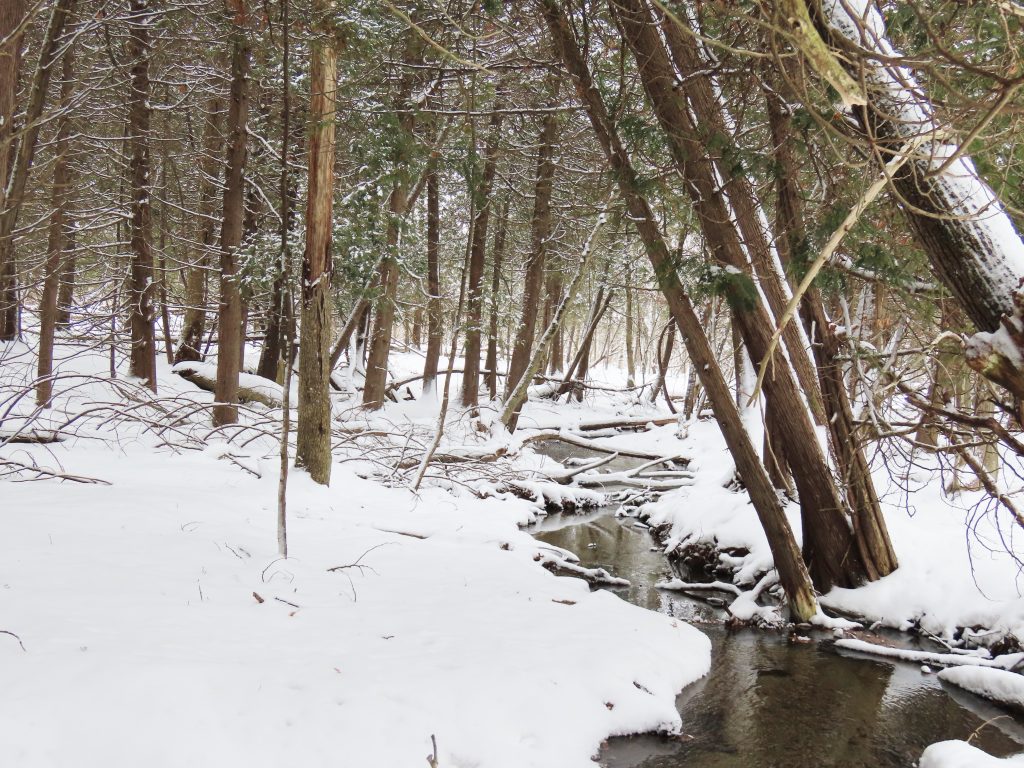 The Peace of Wild Things (Berry, 1968) suggests, a least for me, that when the rushed pace and distractions of the modern world cause uncomfortable restlessness or anxiety, a forest with flowing waters or a hidden lake can be the “reset” button for peace and calmness. And quite by accident, that is what occurred during my trek as I meandered about and reached Cedar Creek where I encountered pockets of uncommon solitude and the sights, sounds and fragrance of wild things in a habitat dominated by cedars.

One need not journey far to reach the park. It’s located on the north side of Oakwood Road about one mile east of busy M-24, immediately across from a small unmarked parking area for the Horseshoe Lake State Game Area, a marshy site managed by the Michigan Department of Natural Resources. Before rushing off to explore Oakwood Lake Township Park site, or any primitive site for that matter, there is one thing you must remember to bring with you, and that is situational awareness. Being alone in the woods is always an exciting experience for me and it provides an opportunity to accept strengths and weaknesses. At times, especially when I wander off trail to follow wildlife tracks, seek out the source of a bird song, or follow a meandering creek, I become “directionally challenged,” a weakness I acknowledge.

This adventure was no exception; it happened to me shortly after I paused to explore the remnants of a cabin from the 1920s and then followed an assortment of wildlife tracks along an almost hidden, gurgling creek that flows from secluded Rossman Lake, a small glacial kettle lake ringed by cedars, tamaracks and cattails. The falling snow under a heavily overcast sky made it difficult to determine what direction would eventually take me back towards the parking lot, but I continued my exploration of the simplicity of nature’s way, planning to rejoin the trail system later, a trail system designed for warm weather use of disc golfers. I also planned to visit the lone lakeside snow-covered picnic table and barbecue grill I passed minutes earlier, but wandered further off trail in pursuit of nature’s way. There is an online map for Oakwood Lake Township Park, but snow and lack of signage made it rather difficult to follow in winter – at least that is my excuse for becoming directionally challenged.

Someone reading this may be thinking, “Follow your GPS!” I’ve never been a fan of electronics in the woods. I find them terribly distracting. But I did have with me my day pack that accompanies me on most hiking adventures in wilderness areas or off the beaten trail in Oakland County. The pack has everything inside for an unexpected night out, even in winter. The primary items are wax coated matches, dry tinder, a compass, a signal mirror, a knife, a parachute cord, a jetboil stove and two dehydrated meals, a flashlight, a “survival blanket” that doubles as an emergency shelter, a water filter, power bars, chocolate candy, paper and pencil, and Ziploc bags. Thus armed, I feel comfortable knowing that if something goes wrong I can hunker down in place and be around to see the sunrise instead of wandering aimlessly with worries about thin ice, hypothermia and hunger. Just as important as to what I bring with me, and knowing how to use every single item I carry, is what I do not bring and tops on that list would be a radio with earbuds. Earbuds would silence the music of nature and distract from my invisible guardian partner: situational awareness. 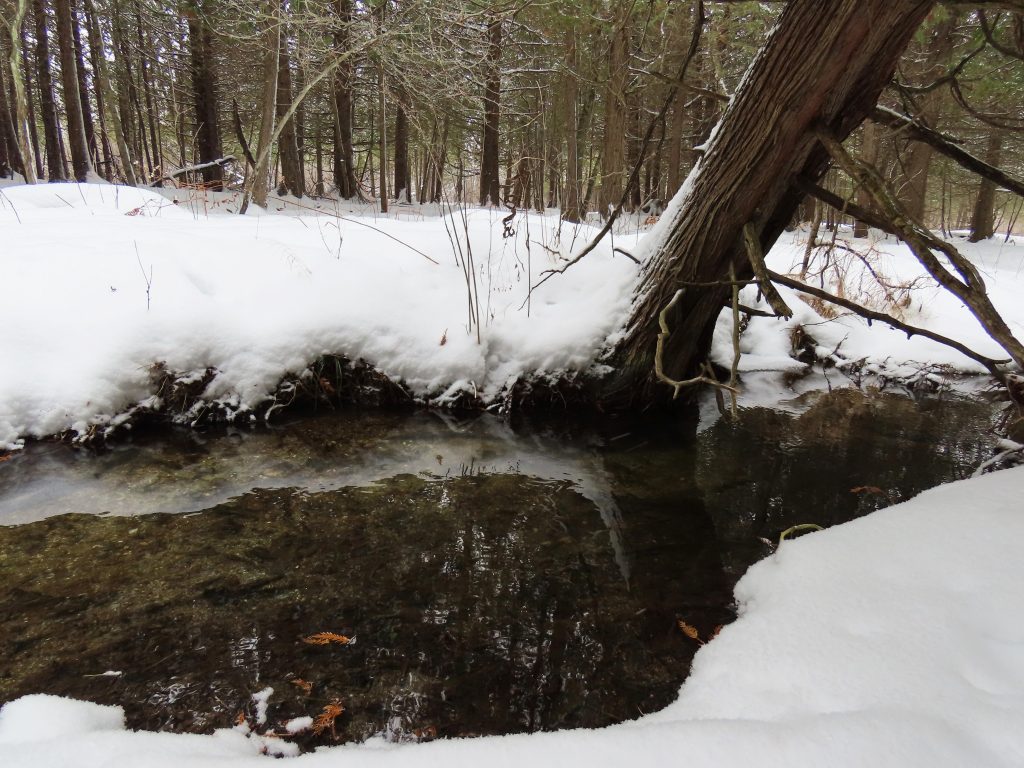 Making note of snow on the east side of the trees, I continued my meander along the creek and experienced a moment of remorse when my boots crunching in snow disturbed deer that were all but hidden in plain view under the cedars. It was the perfect place for hot tea from my thermos, and to admire the pale green, but eye-catching foliose lichens on the trees. Although their ruffled leaf like edges are usually very flat in winter, these were upturned more like they are in spring, perhaps because of our mostly mild and wet winter. Lichens are very primitive plants and are an example of biological mutualism. Michigan State University Extension describes them this way, “Lichens are not one life form, but two, living together in perfect harmony. Various forms of fungi and algae combine to create the different kinds of lichens. The fungus provides protection for the algae and the algae provides food in the process of photosynthesis to the fungus.” 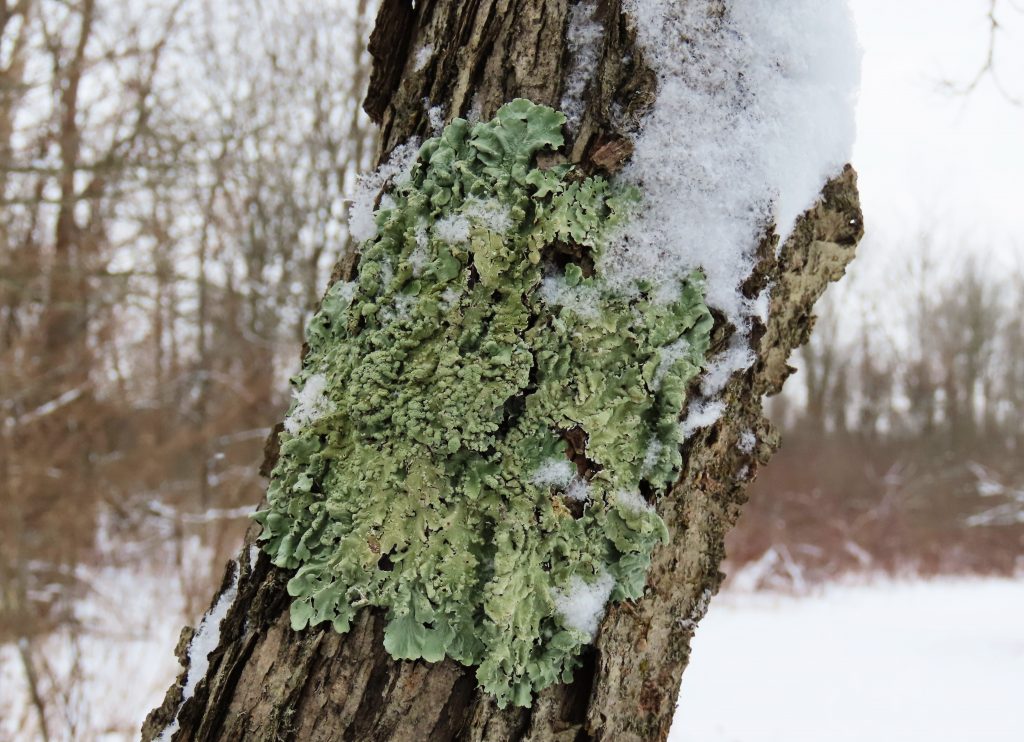 I continued my trek, heading more or less in the correct direction, stopping often to admire the hardwood trees that confirmed I was heading further away from the swamp. I paused again to photograph the curled bark of white birch and the rough pattern of black cherry, simple things of nature, but old friends for me.

After a few more twists and turns and coming across snow-covered disc golf signs, I found myself on a trail that confirmed I was approaching the parking lot. Snowfall accelerated again just as I put my day pack away and began heading west on rural Oakwood Road. That drive gave me time to reflect on the pleasures and perils of solo hiking on the wilder side of Oakland County.

Solo hiking and wandering off trail are not for everyone. It certainly is not advisable for an inexperienced hiker to explore an isolated wintery site with primitive trails. Solo travel is, however, one of the best ways to embrace nature and when you do so, you never have to worry whether you are hiking too fast or too slow for your companion. Just follow the voices and music of nature and let them set your pace with solitude, simplicity and situational awareness as your constant companions.