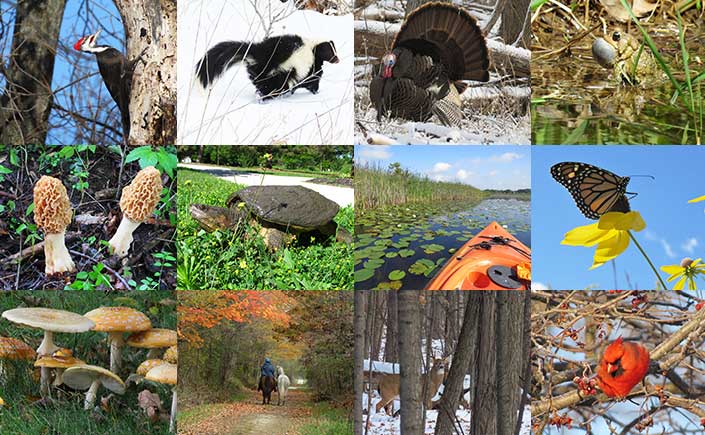 January is the month that some lament the onslaught of winter storms, but for those that love the ways of nature, it’s a month of grand adventure and discovery. It’s a time to hike and breathe deeply under evergreen trees and, if Mother Nature cooperates, snowshoe on backcountry trails. It’s a refreshing time of renewal. Pileated Woodpeckers, our red-crested forest giant and the largest woodpecker of North America, chisel deep rectangular shaped holes into dead trees in their search for carpenter ants and other meaty morsels. January 10th bring us the wolf moon. There are no wolves in Oakland County, but listen for the night howling and yips of eastern coyotes that have adapted to our ways on that full moon night. January is full speed ahead for cottontail rabbits. Some scrounge under bird feeders for food while others stay hidden under shrubs, venturing about after dark in a world full of predators. 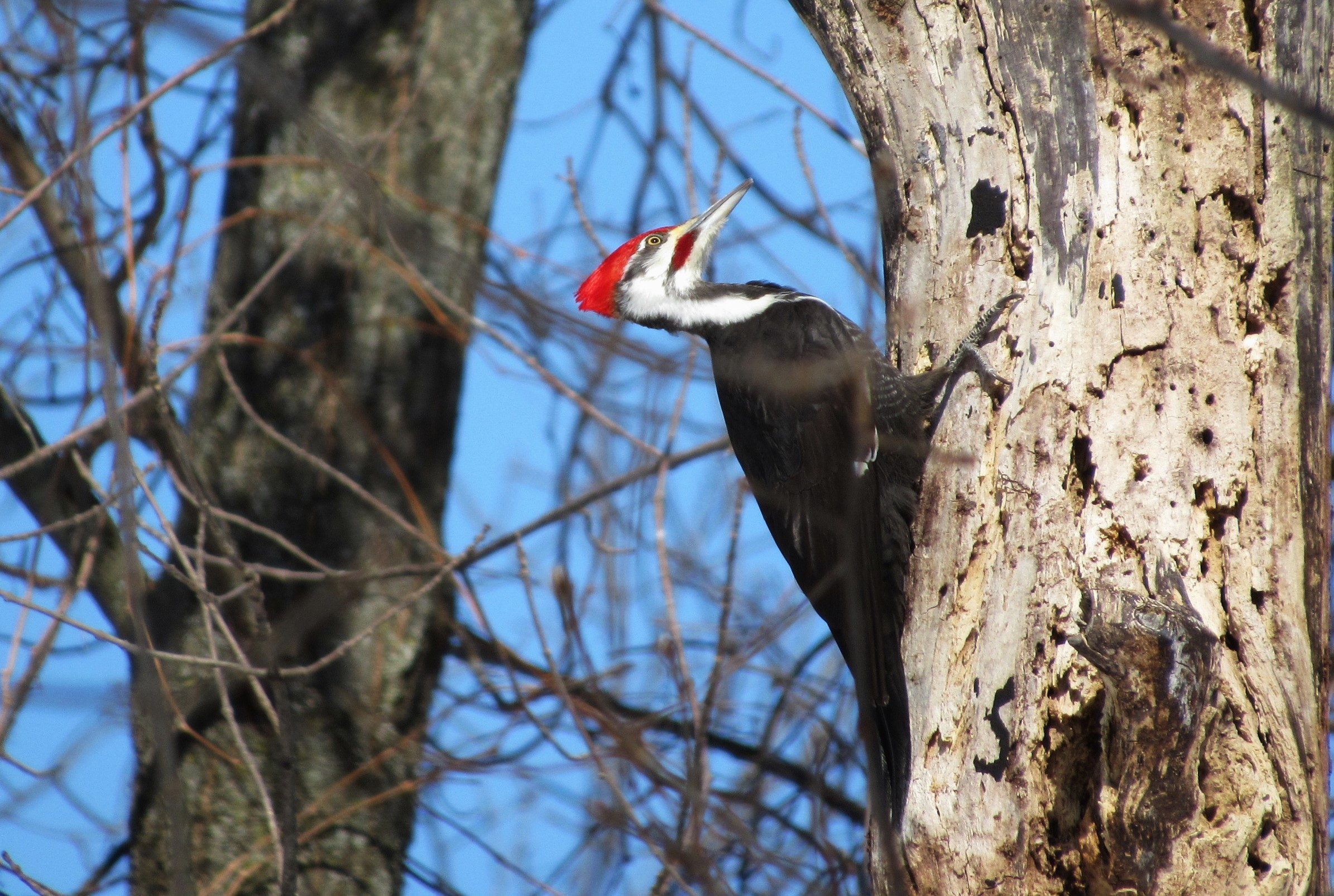 February quickens the pace of creatures of the wild. Skunks meander near spring-fed streams and explore under suburban decks in search of love. It’s also the nesting season for Great Horned Owls. Armed with powerful talons and the gift of silent wings, these watchful raptors search for rabbits, the “morel mushroom” delicacy of their world. Squirrels feast on black walnuts stashed away in the hollows of trees and sometimes to the chagrin of homeowners, in an attic crawl space. February is a delightful time for cross country skiing at our Huron-Clinton Metroparks, Oakland County Parks and on the hilly trails of our expansive State Recreation Areas managed by the Michigan Department of Natural Resources. 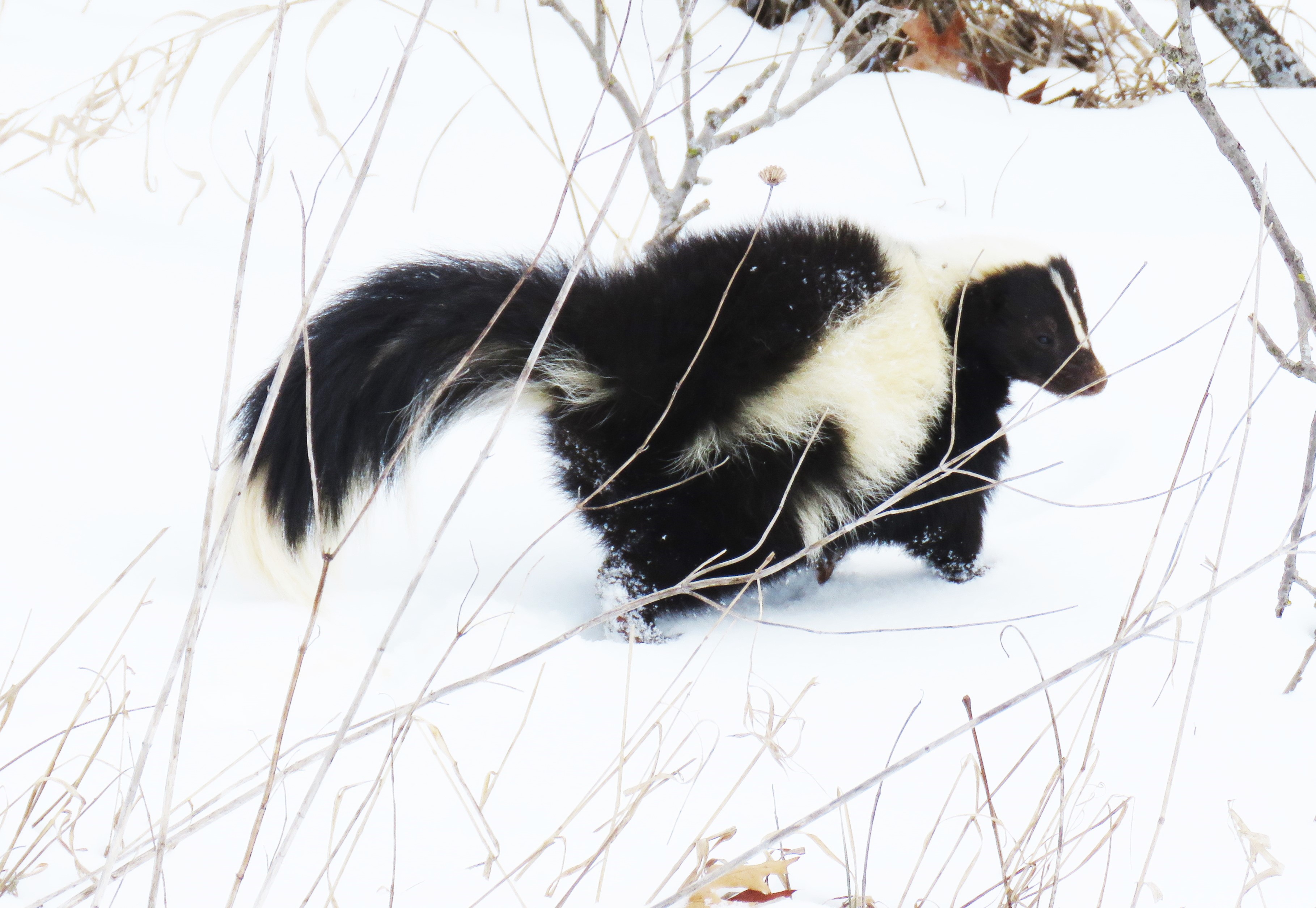 March sets the stage for Tom turkeys to strut their stuff for breeding season. Maple sap drips and creates music in tin buckets. The Bald Eagles of Stony Creek Metropark, and perhaps other eagles in more secluded locations known only to them, reinforce their mighty nests that can be eight feet wide, often over ten feet deep and may weigh more than a ton. Pussy willows bloom, lake ice crackles and booms with temperature fluctuations and red fox are restless. Eastern Bluebirds appear in sunny meadows-contrary to popular belief-many of these beauties did not migrate and overwintered in our sheltered swales and shrubs and are only noticed now when they explore nesting boxes or peck at suet on feeders. 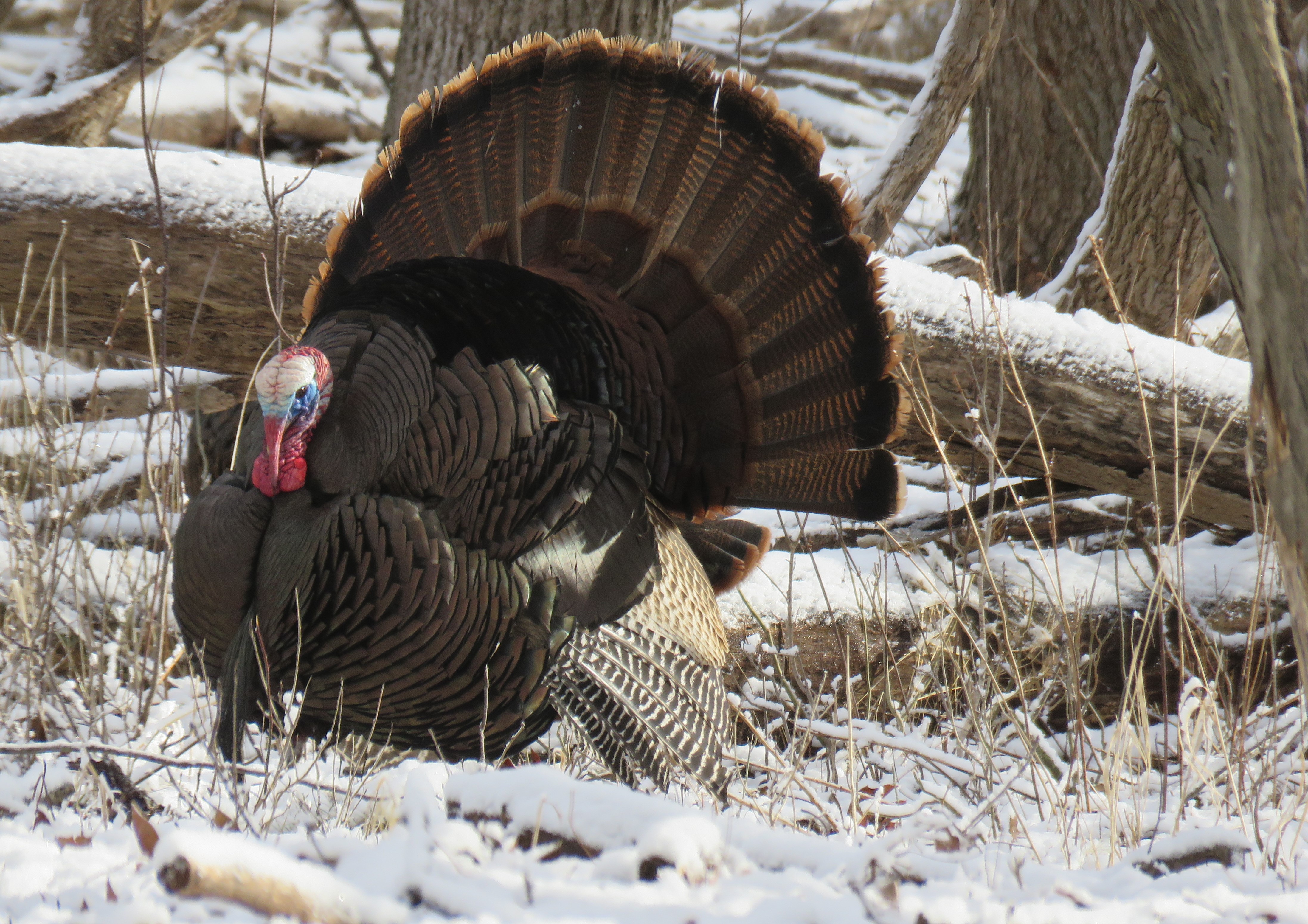 April brings the symphony of amphibian songs to our wetlands. There is perhaps nothing more thrilling on a warm April day for those that love the ways of nature than to watch and listen to the trilling of an American toad in a trailside wetland as it inflates its sound-resonating throat pouch. Migrating birds have returned. Among the well-dressed are the male Wood Ducks. These beautiful ducks have claws on their webbed feet allowing them to perch in woodland trees near vernal ponds. Tree Swallows swoop acrobatically over ponds in a search for tiny winged insects. Sandhill Cranes stalk farm fields for meadow voles and last year’s seeds in rural sections of our county, while others meander along the nature trails of Kensington Metropark and prepare to nest at the water’s edge. 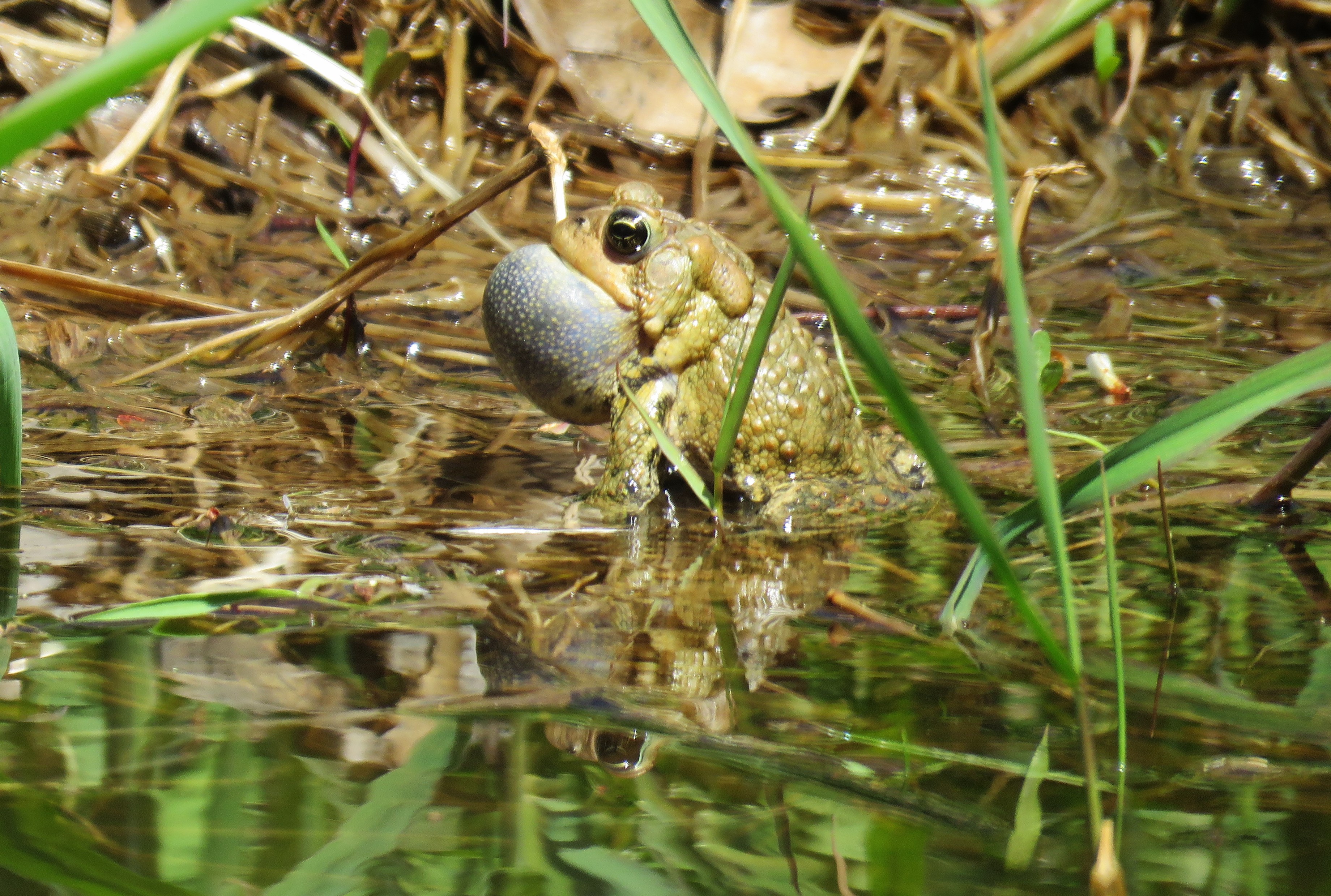 May is a magical month of discovery for those that walk slowly, stop often, look and listen. Wander the woods and meadows and sightings of the season are endless. Trillium blooms, fawns remain motionless in the shadows and raccoons may sprawl out on tree branches to nap in sunlight. Ruby-throated hummingbirds hover by flowers as they beat their wings over 80 times a second. Honey bees are buzzing, leopard frogs are leaping, Red-tailed Hawks are soaring, butterflies fluttering, and majestic Sandhill Cranes trumpet in flight. May brings morel mushrooms, the grand prize for foragers of fantastic forest and field fungi. 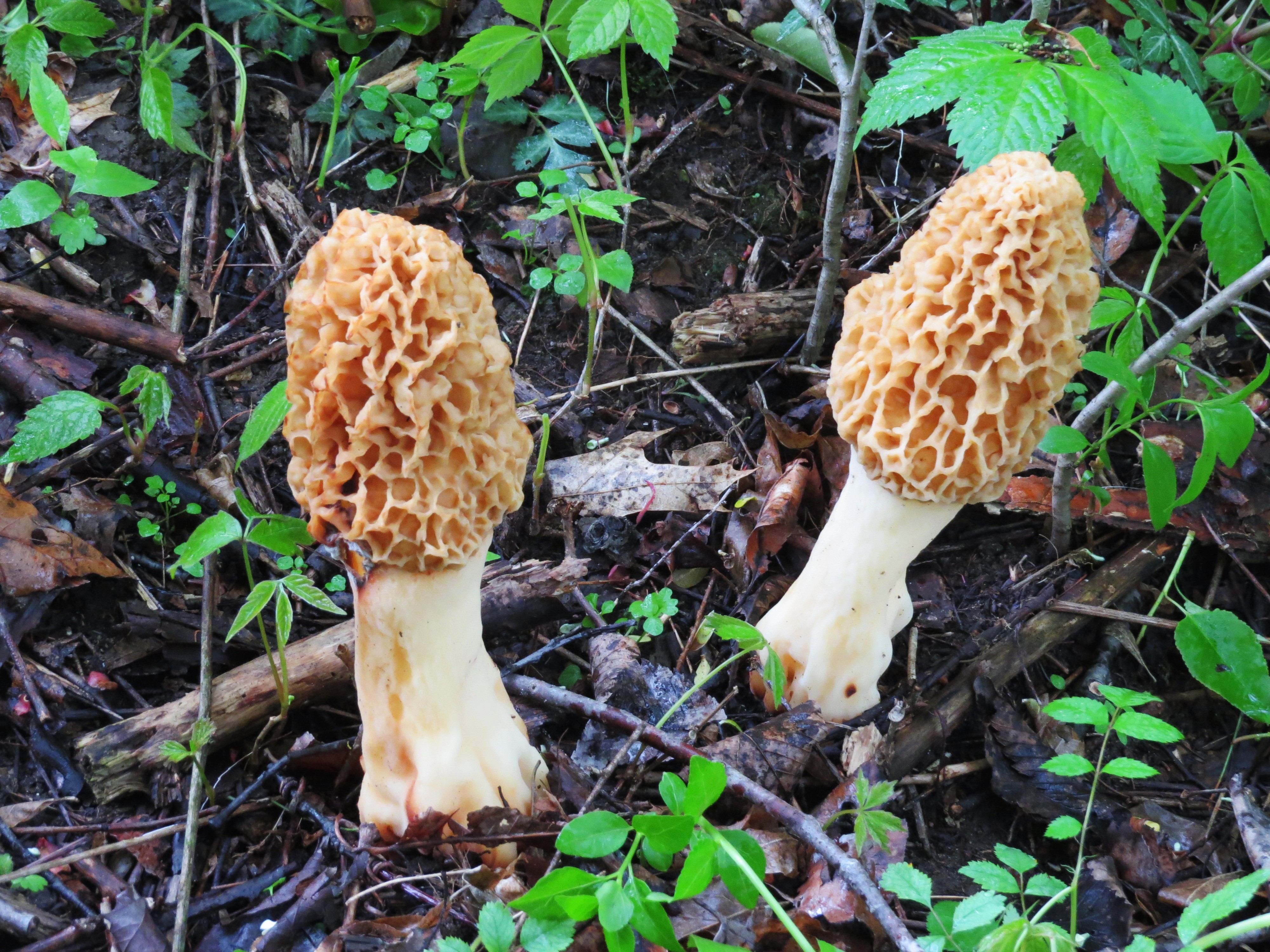 June is the season for meadow wildflowers nodding in breezes as dragonflies zip low over meadows and wetlands in their endless search for mosquitos. Turtles lay eggs along roadsides and sometimes in freshly turned garden earth, eggs that are often consumed by raccoons before the next sunrise. Marshes are alive with the song of red-winged blackbirds and the flashing of the male’s red epaulettes. Coyote pups explore their world with cautious curiosity and puppy like playfulness. Canada Geese feeding on the greens defend their fluffy chicks from intruding golfers with surprising ferocity. June is the season when humans forage alongside birds for wild berries of all sorts, with black raspberries being a favorite. 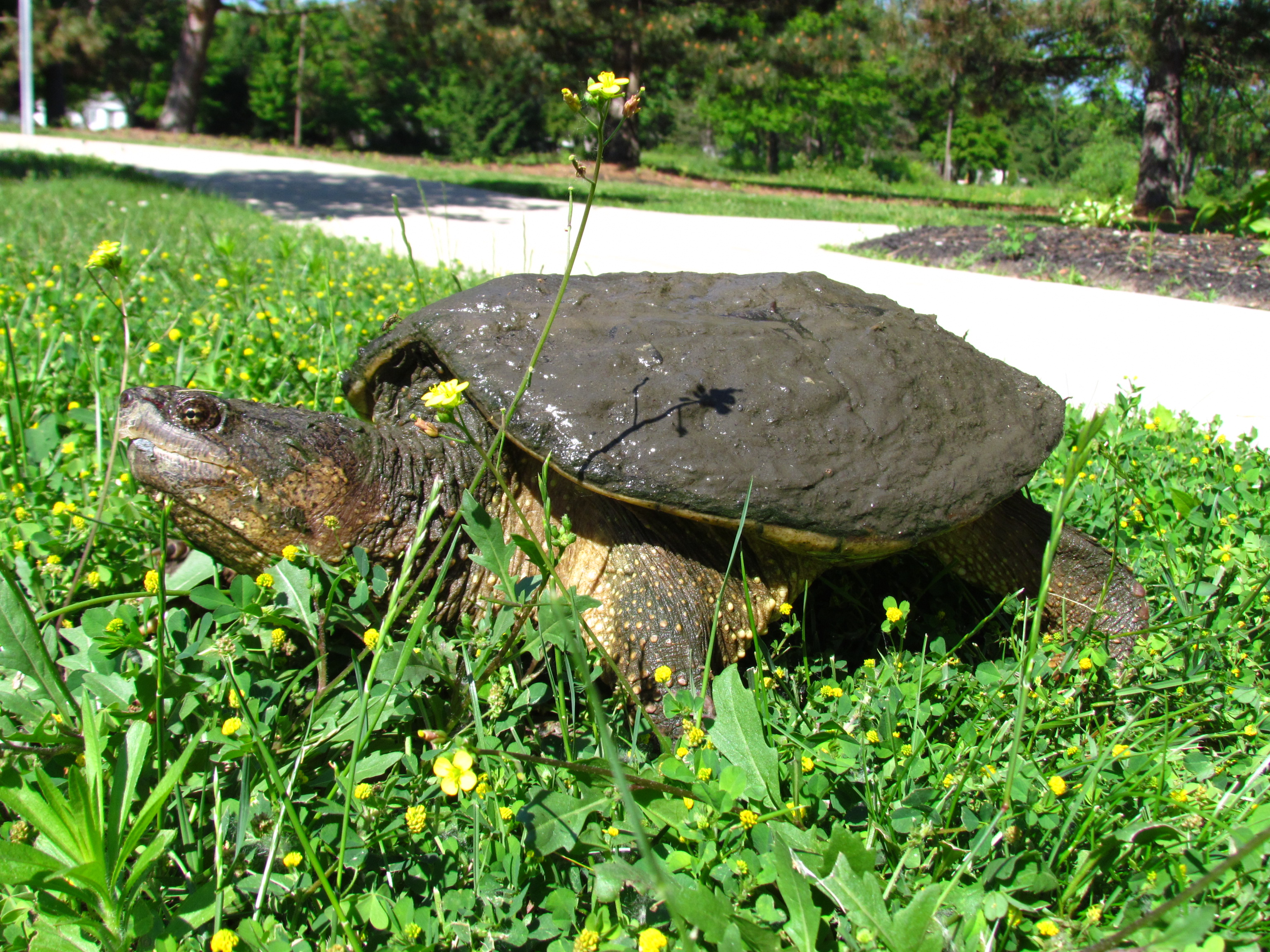 July is perfect to paddle in our parks’ lakes with my local favorites being Crooked Lake at Independence Oaks County Park, Lake Sixteen at Orion Oaks County Park, and for a sunrise adventure, it’s Graham Lakes at the Bald Mountain State Recreation Area. The Huron River at Proud Lake State Recreation Area tempts me too. Water lilies are blooming, muskrats nibble on greens, goslings paddle furiously behind mom goose, snapping turtles swallow goslings, turkey vultures ride thermals, osprey dive for fish, young toads hop out of their breeding ponds, poison ivy and stinging needle explode with growth and we pray for more swallows and dragonflies to swallow mosquitos. July races along all too fast for everyone that loves summer. 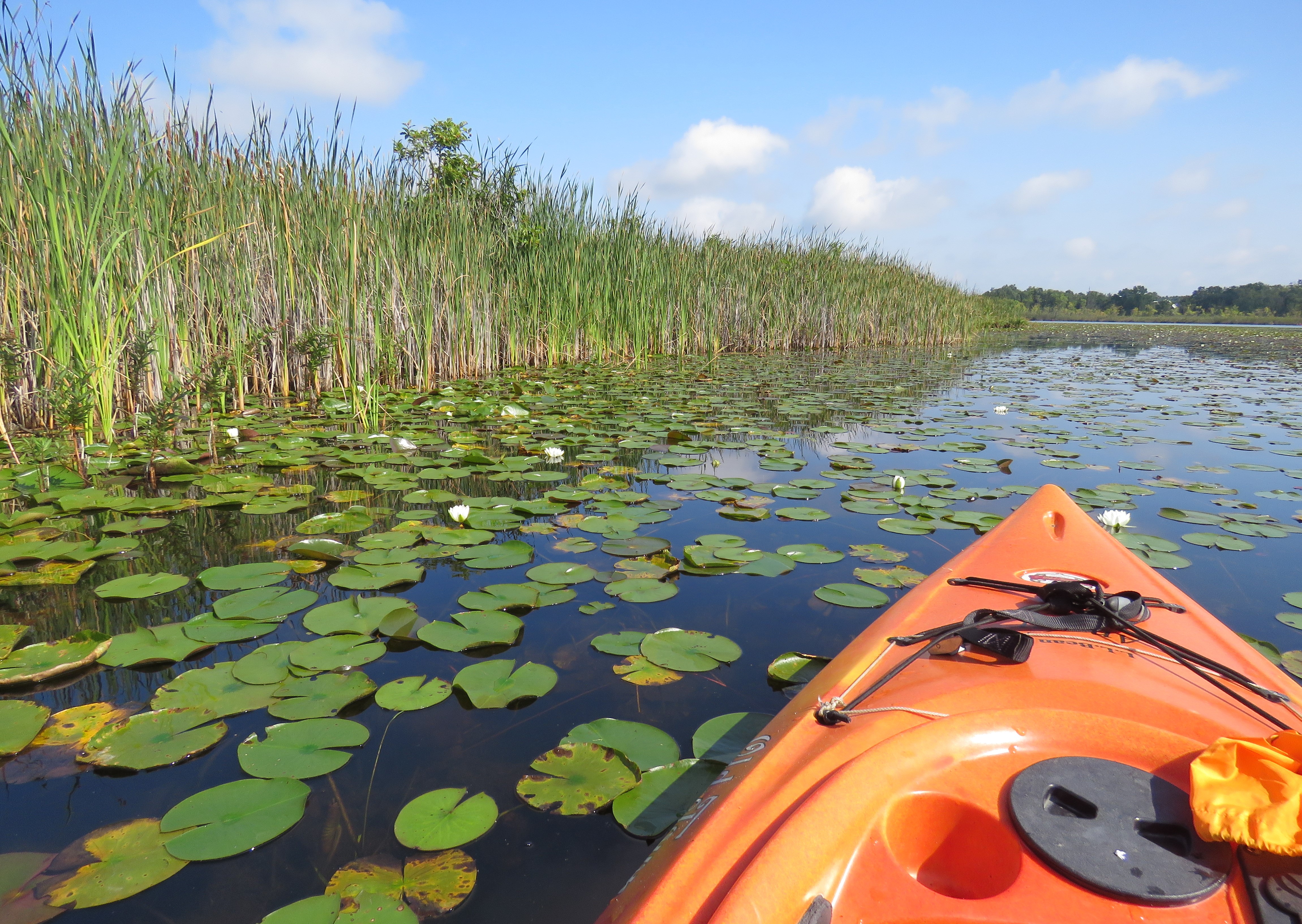 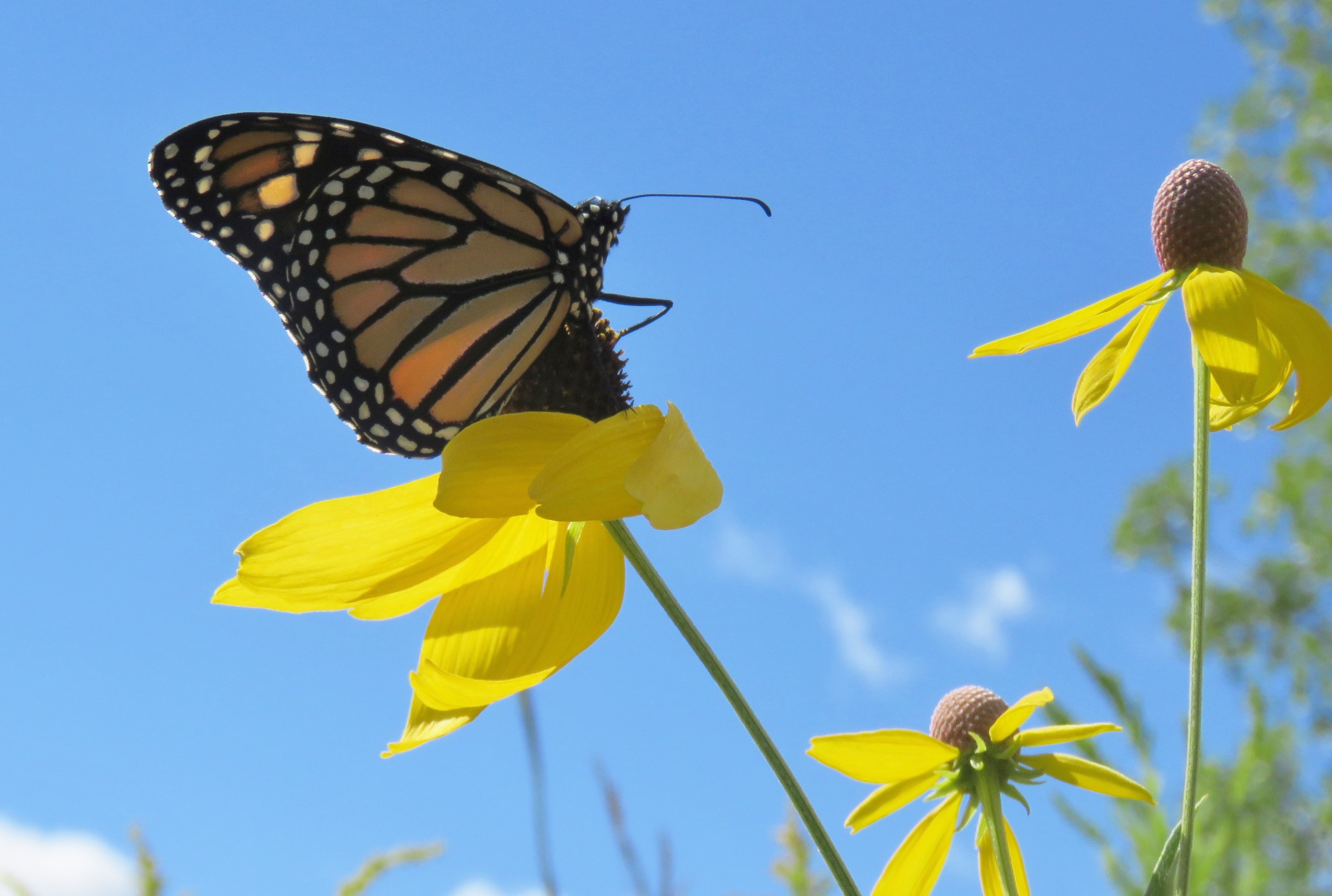 September rains accelerate the growth of colorful Amanita mushrooms that appear almost magically overnight, the same rains that stir the red-backed salamanders into increased movement under moist leaves. Garter snakes slither in sunny woods. Bats swoop low over evening barbecues, and crickets chirp under the moonlight. Hikers, cyclists and joggers are as restless as the birds that will soon migrate. At dawn’s first light, dedicated runners work their leg muscles and lungs on the trails of our hilly State Recreation Areas in final preparation for the 13th running of the Brooksie Way, an event that all but signals summer is ending. Deer watch their woodland workouts perhaps wondering “why” run. 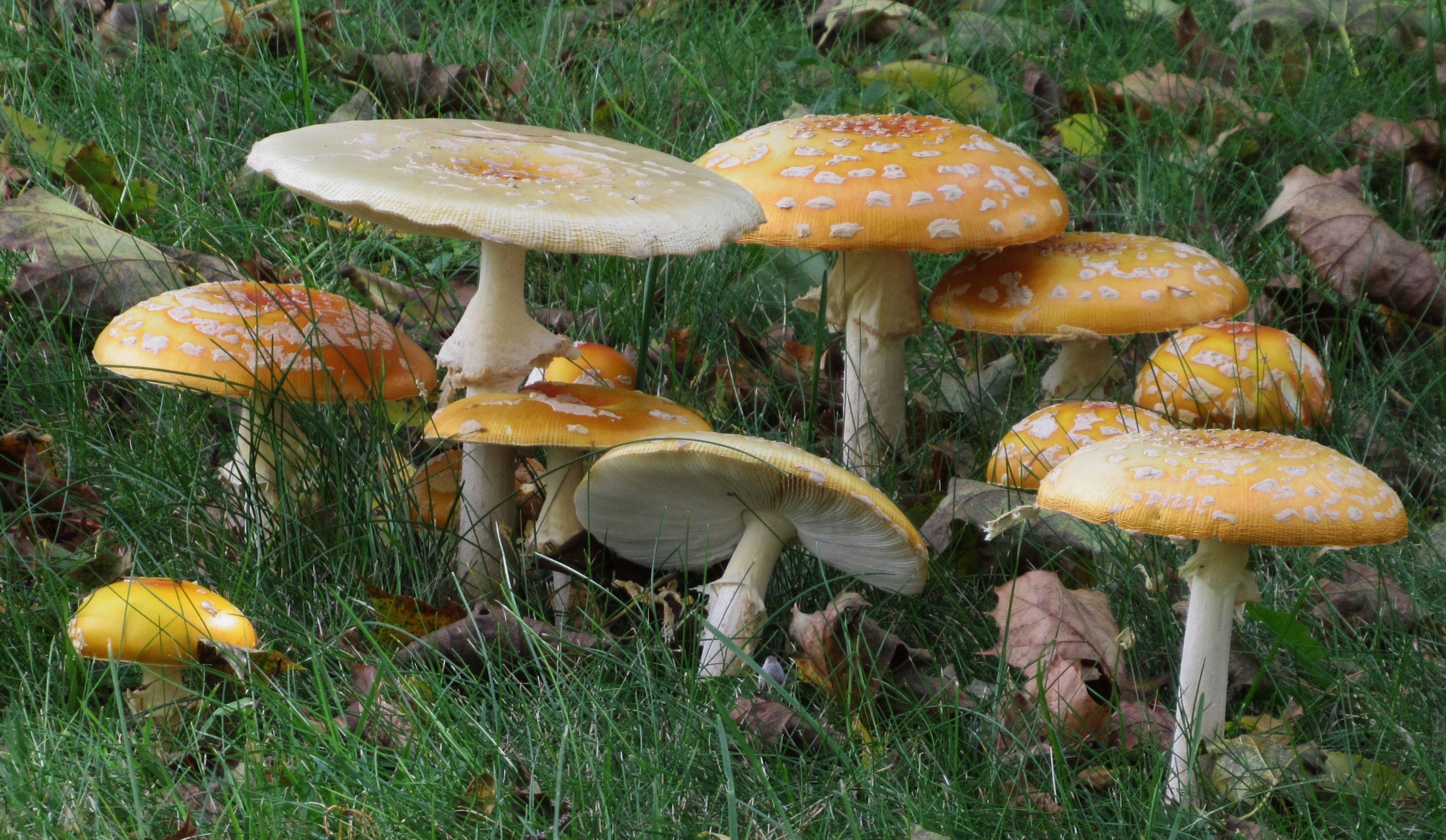 October is the season when Mother Nature works overtime to paint trees in spectacular colors. Diminishing hours of daylight remind the last of the hummingbirds to fly south. October has chipmunks scurrying to store seeds in their underground pantries. Rattlesnakes slither down moist crayfish burrows to slumber until spring. Beavers fortify their lodges to prepare for winter. Sandhill cranes wing southward not far behind geese. October is a glorious month to hike the hills and trails of our county and cycle for miles on the Paint Creek Trail, Polly Ann Trail, Clinton River Trail, West Bloomfield Trail and the new Michigan Air Line Trail. October ends all too quickly. 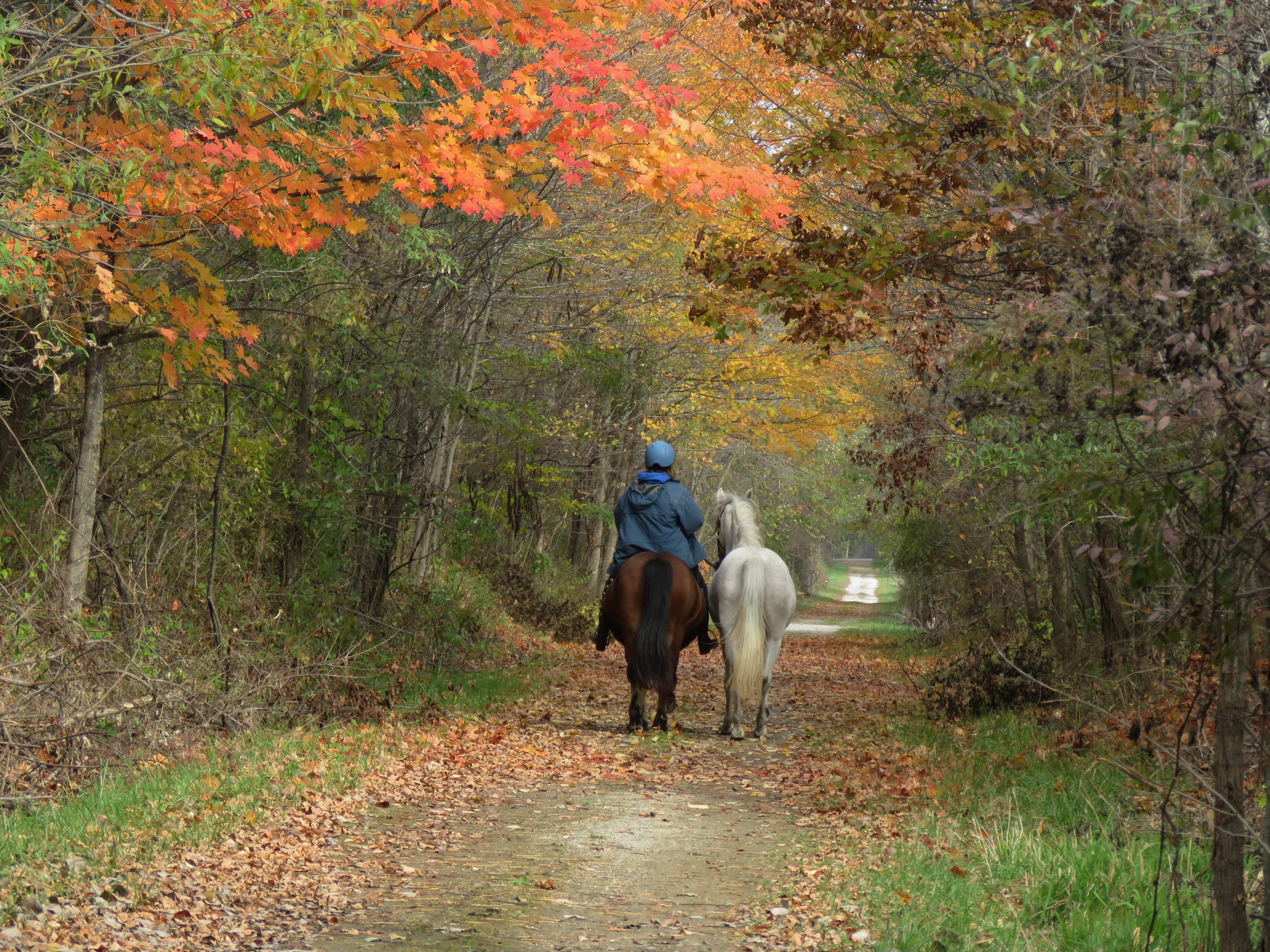 November has birds jostling for position at newly hung feeders. It’s the season that humans trek to the nature trails of Kensington Metropark to hand feed bold Black-capped chickadees that have acclimated to human hands bearing sunflower seeds. Bucks stalk the woods and meadows in a restless search for does. Frost becomes commonplace. Delicate ice forms artistic patterns on puddles. Blue Jays appear more boisterous as Red-bellied Woodpeckers flit among the trees. Dry leaves crackle and dance about the forest floor creating their own music when strong winds blow. It’s a good season to hike for the sheer pleasure of having eyes on the world of nature. 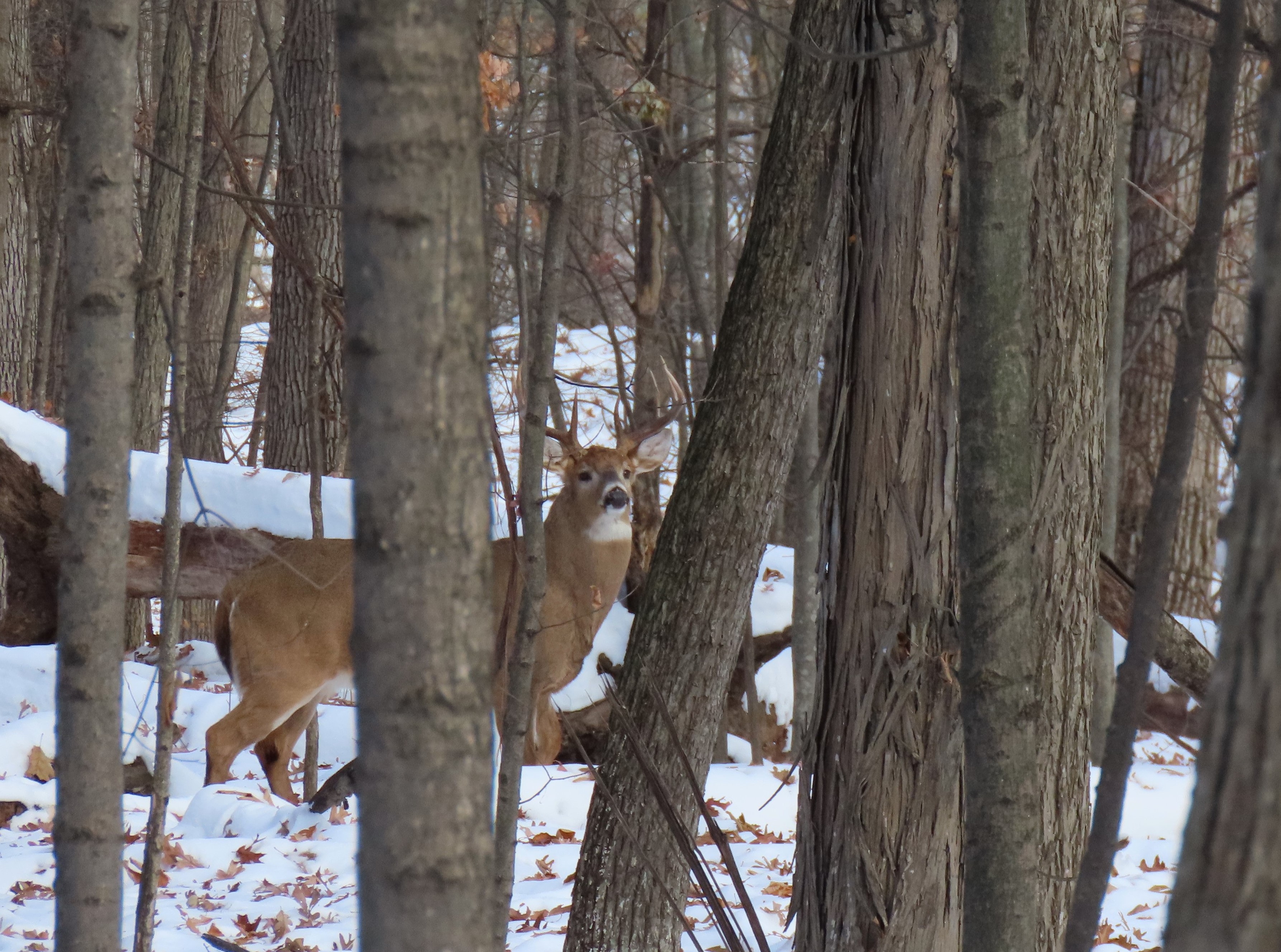 December is not the end of the year, except on the calendar. For in the world of nature, all things are connected and one day merges into the next. December brings endless pleasures for those that venture about and search for the secrets of the season during the short days of the year. Squirrels rest on branches with tails folded over their backs as blankets against the wind. Cardinals feast on frosted berries under brilliant blue skies. Rabbits chew on low to the ground twigs and stand on hind legs to gnaw sumac bark. Tracks in fresh snow reveal where deer bed down, mink tunnel under snow, coyotes hunt, mice scurry and rabbits hide. Winter is rugged, winter is fragile and winter is fickle. The dark days of December remind us that Planet Earth is continuing on its life sustaining journey around the sun and spring will come again and reset the calendar of nature’s way. 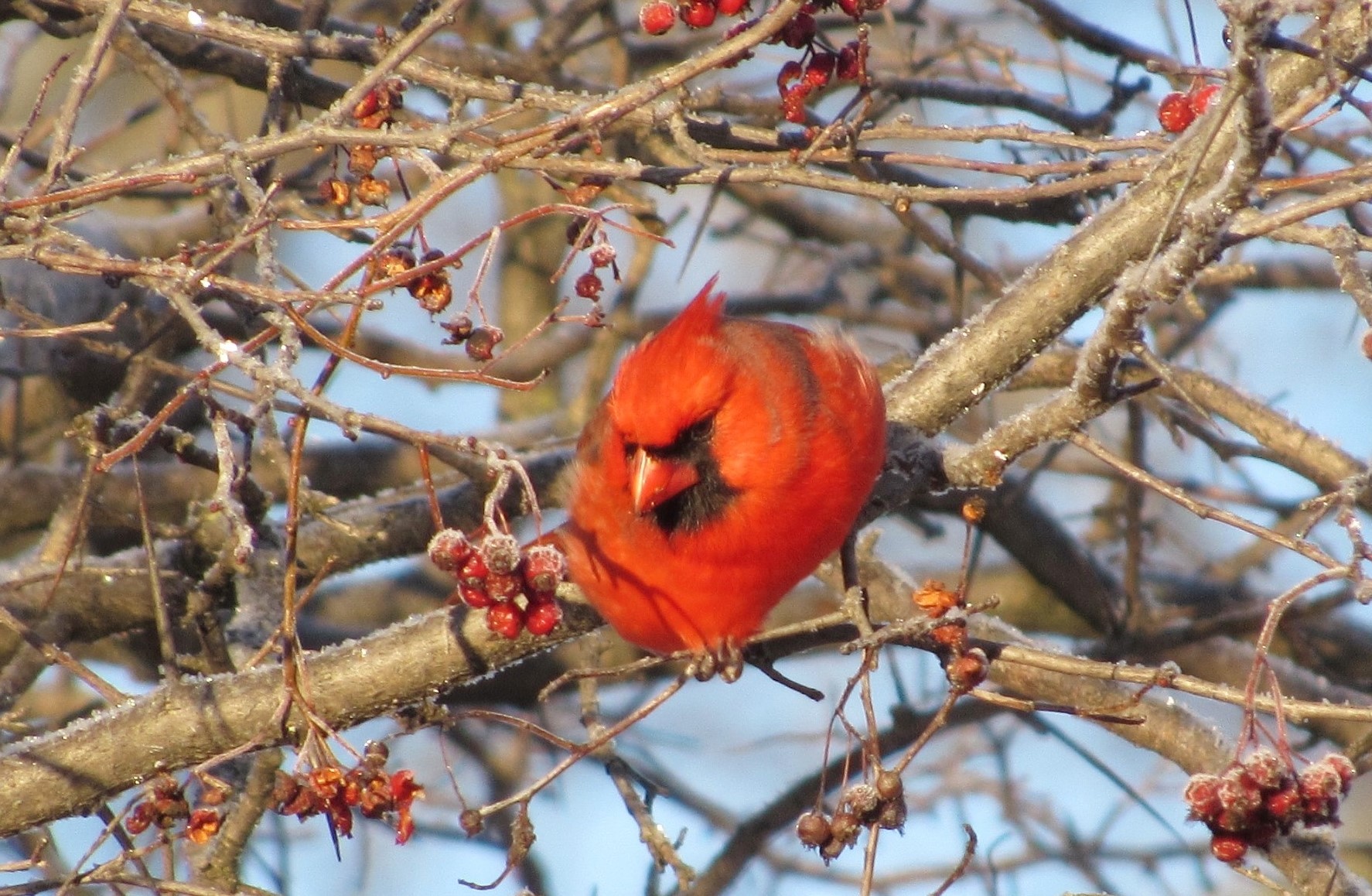