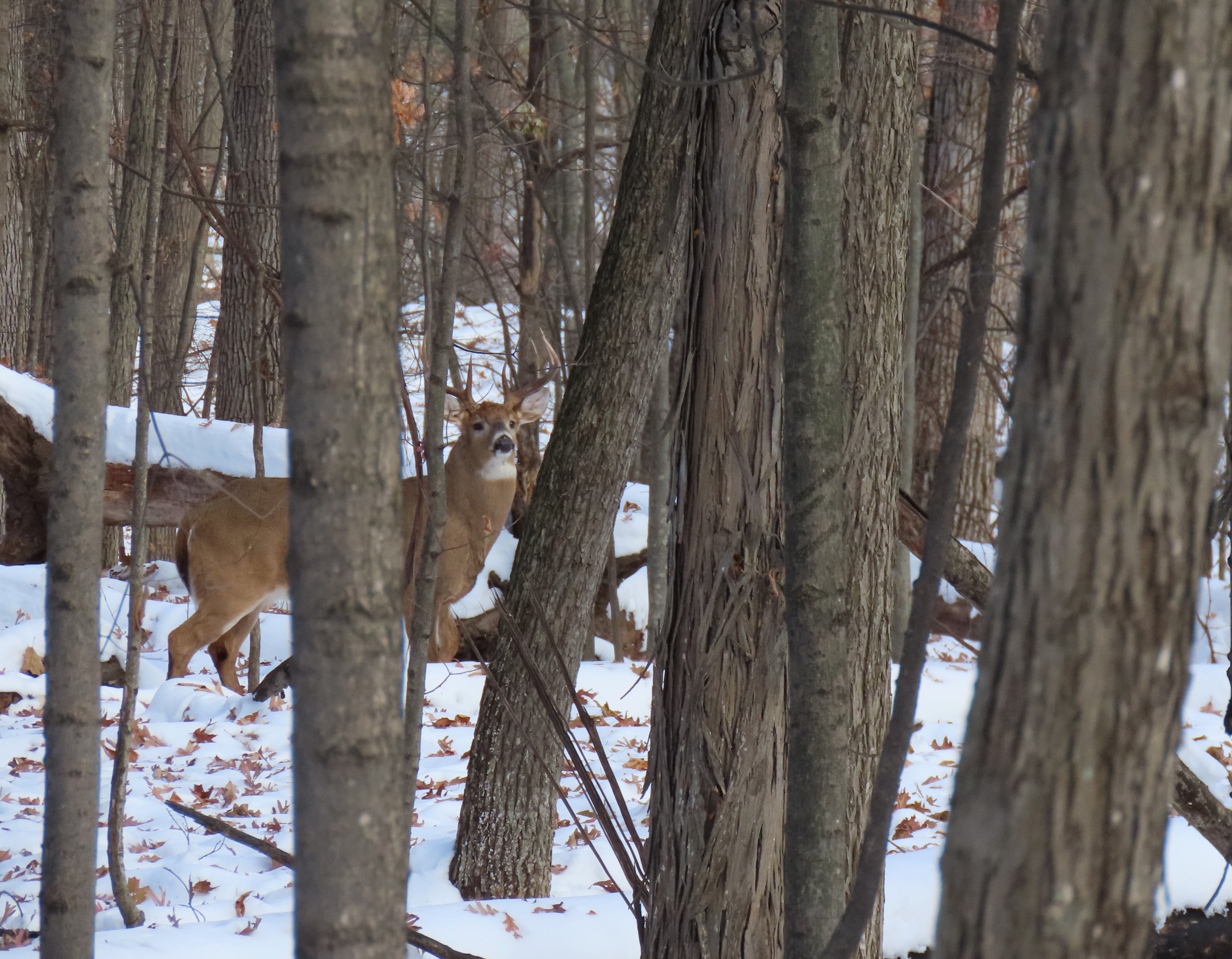 The wilder side of nature is often thought to be found only in faraway places, destinations that take hours of travel and detailed planning to get to. Henry David Thoreau sought out the wilder side and wrote, “I went to the woods because I wished to live deliberately, to front only the essential facts of life, and see if I could not learn what it had to teach, and not, when I came to die, discover that I had not lived.” In reality, pockets of wild nature not only survive in Oakland County, but often thrive, making the division between wild nature and suburban living blurry at times. 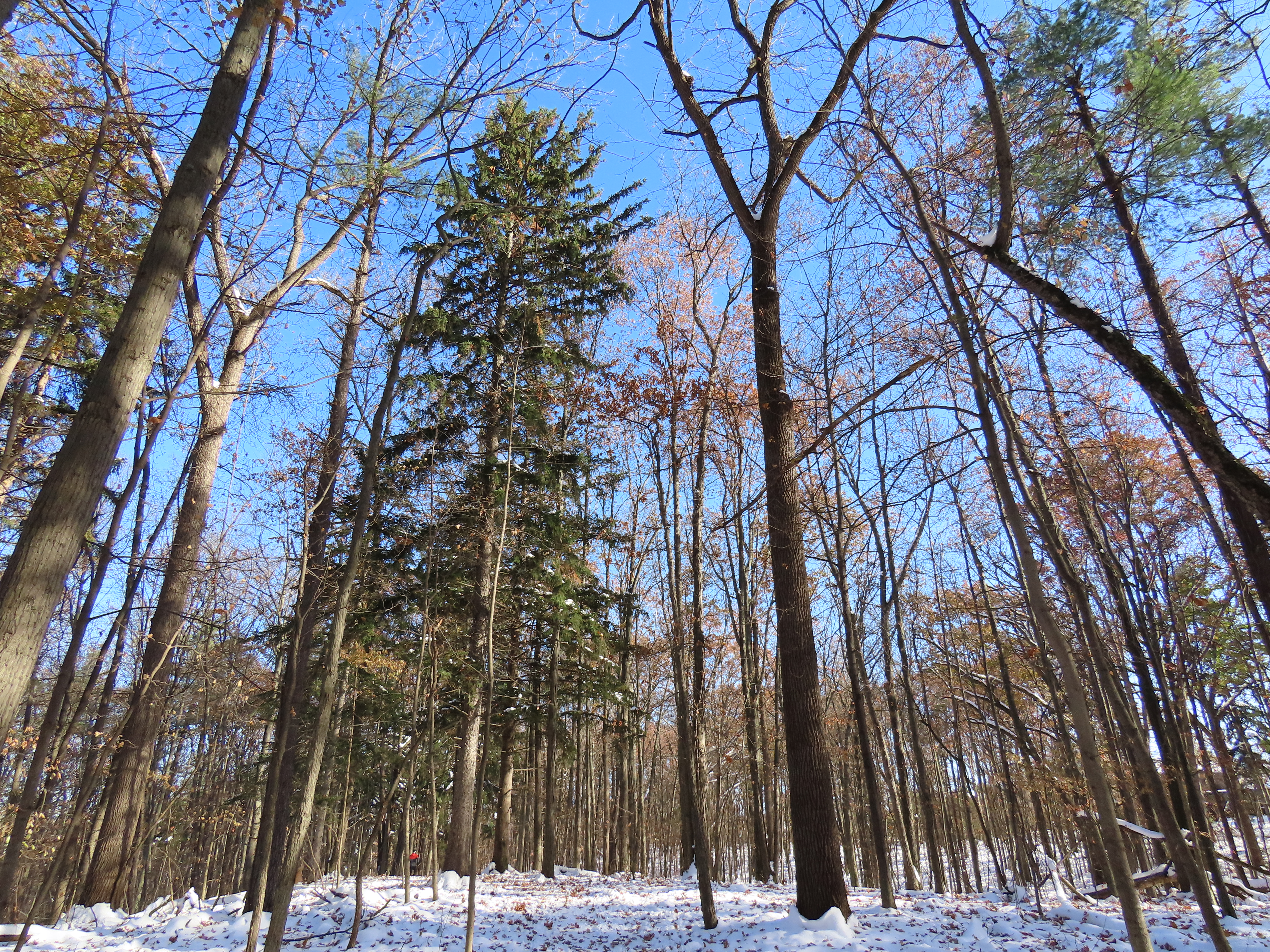 One need not emulate the wanderings of Thoreau and live in seclusion to discover the wonders and ways of nature, but they do need to walk slowly, stop often, look and listen and ignore the temptations of social media’s black hole while on their trek. One of the best places to “go to the woods” and discover the wilder side of our county is at the West Bloomfield Woods Nature Preserve. I went back last Saturday afternoon, my first return trip in several years.

The 162-acre, mostly wooded and rather hilly, nature preserve is managed by West Bloomfield Parks and Recreation and is located on Arrowhead Road, south of Pontiac Trail Road, about one and 1/3 miles west of Orchard Lake Road. Trail maps are posted at the trailhead and at trail junctions, and can also be found online. Park permits are not required and there is a small parking lot on the east side of Arrowhead Road at the trailhead. That location is also a popular access point for adventurers who want to hike, bike or cross country ski along the West Bloomfield Trail, a level 6.8 mile corridor that was part of the Grand Trunk Railway and abuts the nature preserve.

The West Bloomfield Trail corridor connects with the Clinton River Trail at its eastern end, and there is new excitement at its western end. It now connects at Haggerty Road to the newly completed Michigan Air Line Trail that heads west to Wixom. Just as I zoomed in with my telephoto lens from Arrowhead Road to photograph the lesser used western extension of the West Bloomfield Trail that leads to the Air Line Trail, a half dozen deer wandered across, perhaps an omen for what my encounters would be within the preserve. 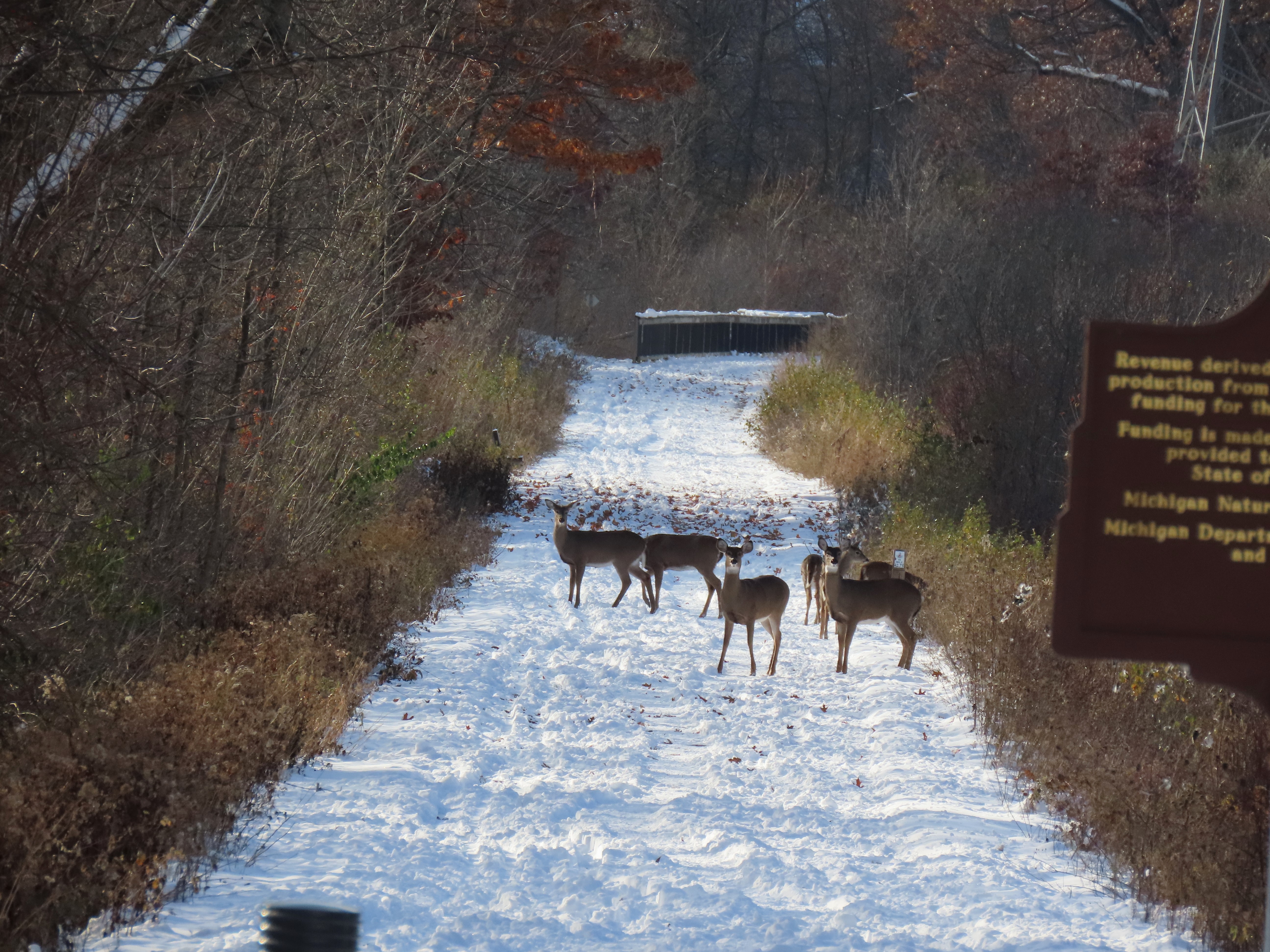 Although leashed dogs are permitted, your chances of encountering wildlife and observing the changing subtleties of nature’s way on any trail are greatly enhanced by leaving Fido at home. Although cross-country skiing is permitted, it’s important to remember that bikes are not permitted in the preserve and hunting is strictly forbidden. The entire trail loop is only two miles long, but the terrain gives the feeling of being in a much larger area. I hiked, perhaps meandered is a better word, for it took me almost three hours to trek two miles, but I followed the mantra I often preach: Stop often. Look about. Listen. If you do the same, the following words of John Muir will take on a deeper meaning, “In every walk with nature one receives far more than he seeks.” 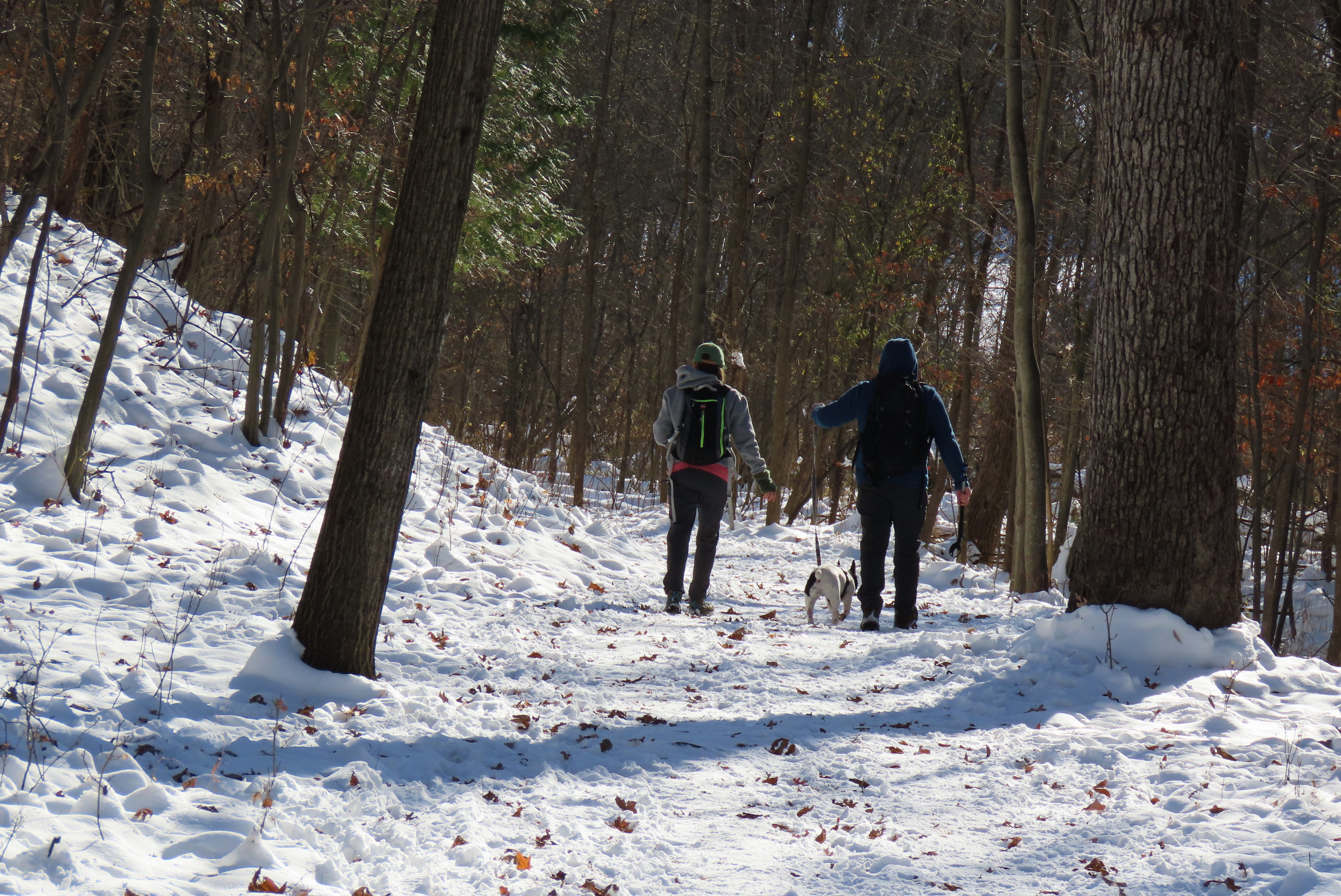 The colorful interpretive signs at the trailhead share detailed information on the history of the land and set the mood for a hike in “the woods,” as many West Bloomfield residents refer to this wildland gem. Reading them before you hike will add to the adventure, which is constant if one is observant. Less than two minutes after I started my trek, I noted a classic rectangular shaped foraging hole of a Pileated Woodpecker, the largest woodpecker in North America. I paused a bit further down the trail to read the interpretive text at the pond overlook. However I would have titled that sign NATURE’S MUSIC rather than NATURE NOISES. Stop and enjoy the wintery view, and the sounds of nature, even when the only sound is silence. Turkey and rabbit tracks were abundant on the ice under the pond overlook and the music of Blue Jays and White-Breasted Nuthatches welcomed me.

Gusts of wind set oak leaves into motion as I trudged up the first hill, stopping briefly to take note of a snow-capped glacial erratic, the signature of retreating glaciers that led to the formation of the hills. I was en route to a hidden ravine that also formed as the glaciers melted and is awash with songbirds in the spring. The preserve is part of the Franklin Branch of the Rouge River Watershed and the looped trail takes hikers over a small creek twice, a feature of the landscape that adds to the diversity and natural value of the land. At the first crossing, I paused to listen to the water gurgle along under the ice and noted numerous deer tracks where they crossed to seek shelter in a cedar swamp. What I liked best came as a surprise, a set of mink tracks in the same location.

I encountered about a dozen people during my trek and wondered how many noted the delicate spidery looking yellow blossoms of witch hazel, an understory tree that is now at peak bloom. I stopped to photograph close up images of the blooms and that’s when I spotted something else, a very fresh buck rub. Buck rubs – the bark scraped by a buck’s antlers – serve as communication, and perhaps territorial signposts, and could be considered part of the “flirting strategy” of a buck.

My trek along the southern edge of the preserve included a pause at a steep ravine overlook that provided a fantastic view of the creek and then took me under large evergreens where I noted owl pellets, most likely from a Great Horned Owl. From there, it was roughly northwards over a small footbridge and up a steep hill and then west on the trail along the north side of the ravine.

I paused to read an old interpretive sign along the northern ridge of the ravine, a sign I know well from almost two decades ago when I worked at West Bloomfield Parks as their naturalist and helped create text for that sign. It was not until I got home and looked at the sign on a computer screen that I noticed two deer in my photo capture, all but hidden behind trees on the far side of the creek. About fifteen minutes after reading that sign, I photographed what I now believe were the same deer as they meandered slowly westward on their side of the creek as I moved along on the trail above the ravine at a snail’s pace with the company of boisterous Black-capped Chickadees.

The real moment of excitement on West Bloomfield’s wilder side occurred when I was about a third of a mile from where my trek started. I stepped a few feet off the trail, noting coyote tracks from the night before, and decided to sit on a snowy log to see what I might see. Ten minutes into my silent watch I heard crunching in the snow and turned slowly to my left. A stately buck, and he was not alone, was moving slowly towards me. For the next 15 minutes I stayed as motionless as I could and captured images of him scrounging for acorns before he became wary of my presence and slowly meandered off with his entourage in tow.

It was only then as I stood that I noted a fox squirrel on a tree almost directly behind me that was perhaps watching me watch the buck, another reminder that in every walk with nature one receives far more than he seeks. 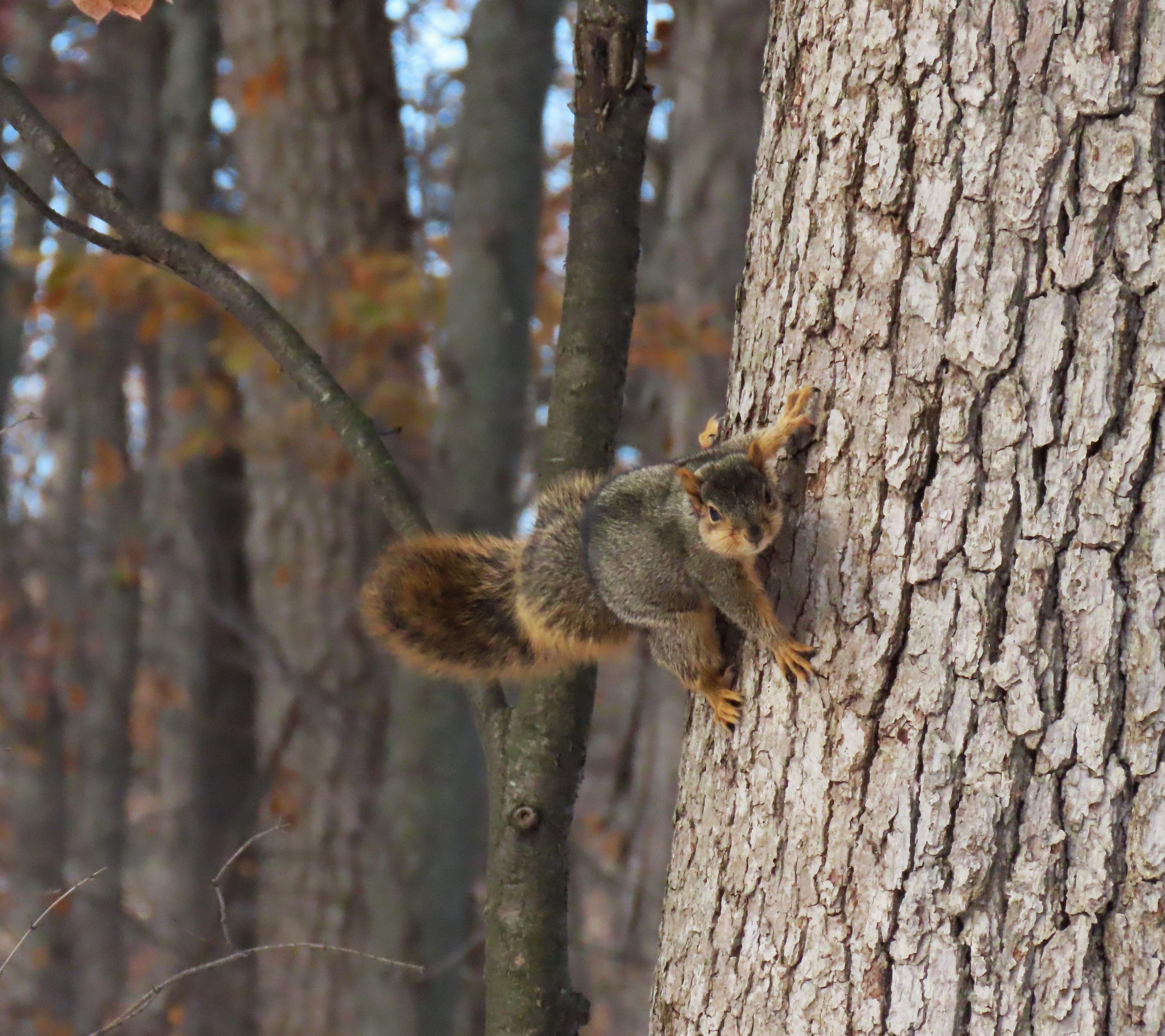