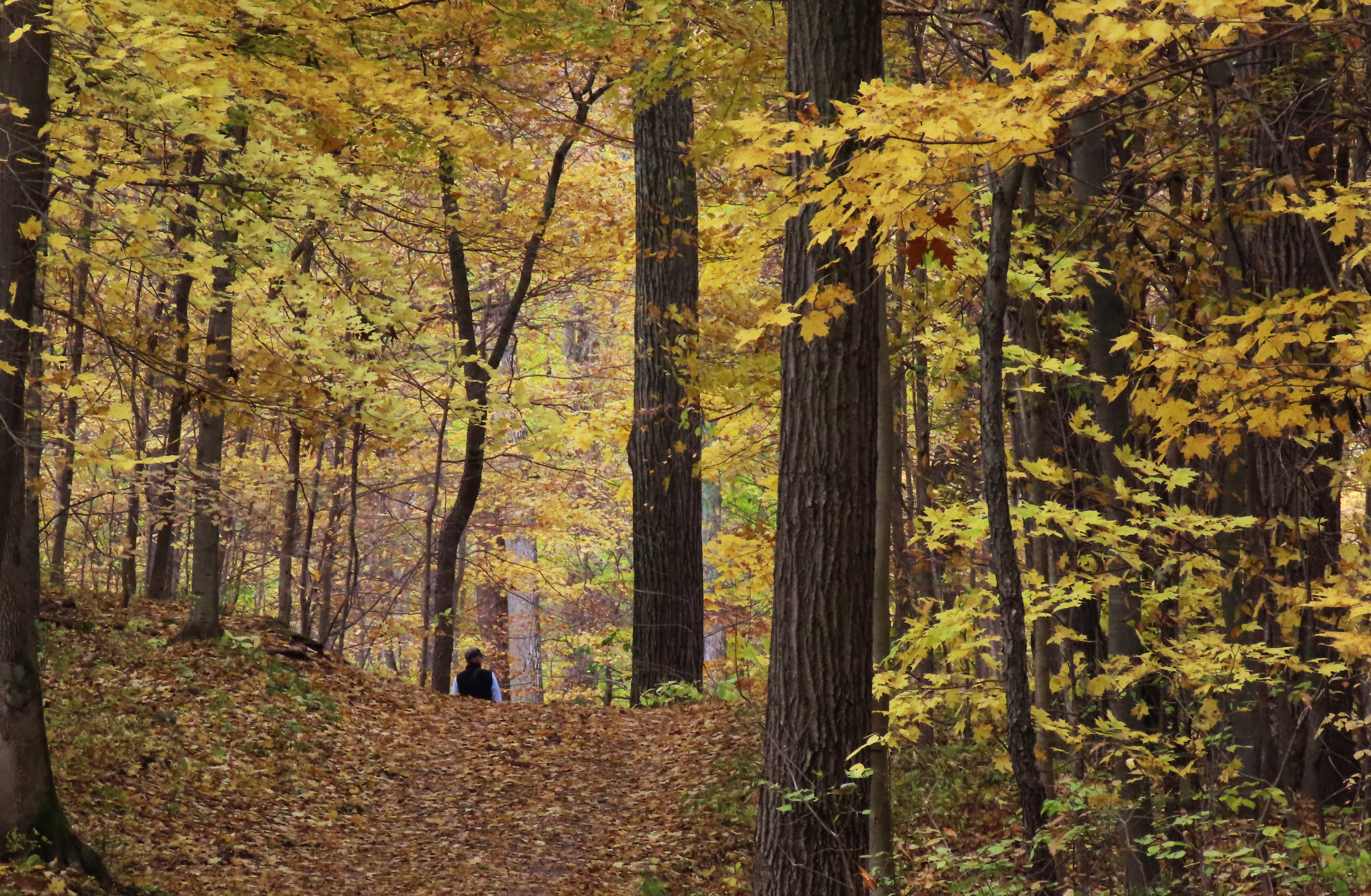 A dusting of Halloween night snow whitened the hills of northern Oakland County, confirming the duel between autumn and winter has accelerated. In anticipation of that forecasted seasonal change, I accepted the invitation of two outdoor adventuring ICU nurses that are avid hikers to join them for an “up north feeling” trek at Stony Creek Metropark, one of 13 parks in Southeast Michigan managed by Huron-Clinton Metroparks. Our destination for the last hike of October was the southwest corner of Stony Creek, the section that is located entirely within Oakland County and has thirteen miles of hilly trails dedicated to mountain bikers, hikers, and perhaps in a few more weeks, if Mother Nature is willing, and it looks that way, cross-country skiers. 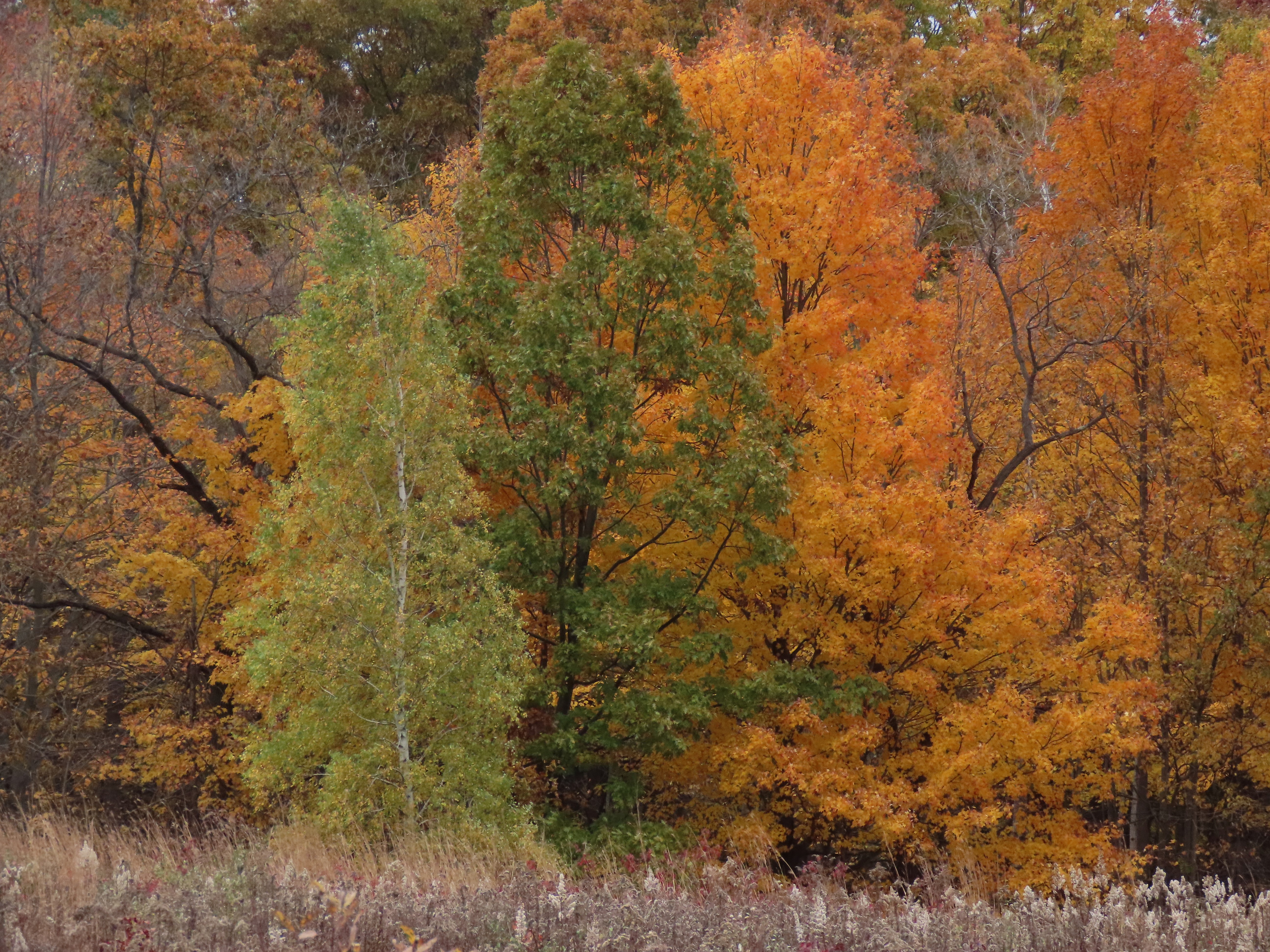 Here’s what Huron-Clinton Metroparks says on their website about the entire park.

Almost a year had slipped by since I last trekked about that heavily wooded landscape with some of the most stunning late autumn scenery in our county. In the larger scheme of things, a year is nothing, for more than 11,000 years have passed since the glaciers retreated, creating a landscape of raw and hilly terrain that is now covered with woodlands. Stony Creek, a beautiful meandering stream, flows through the park landscape and is a precious natural jewel of the park. 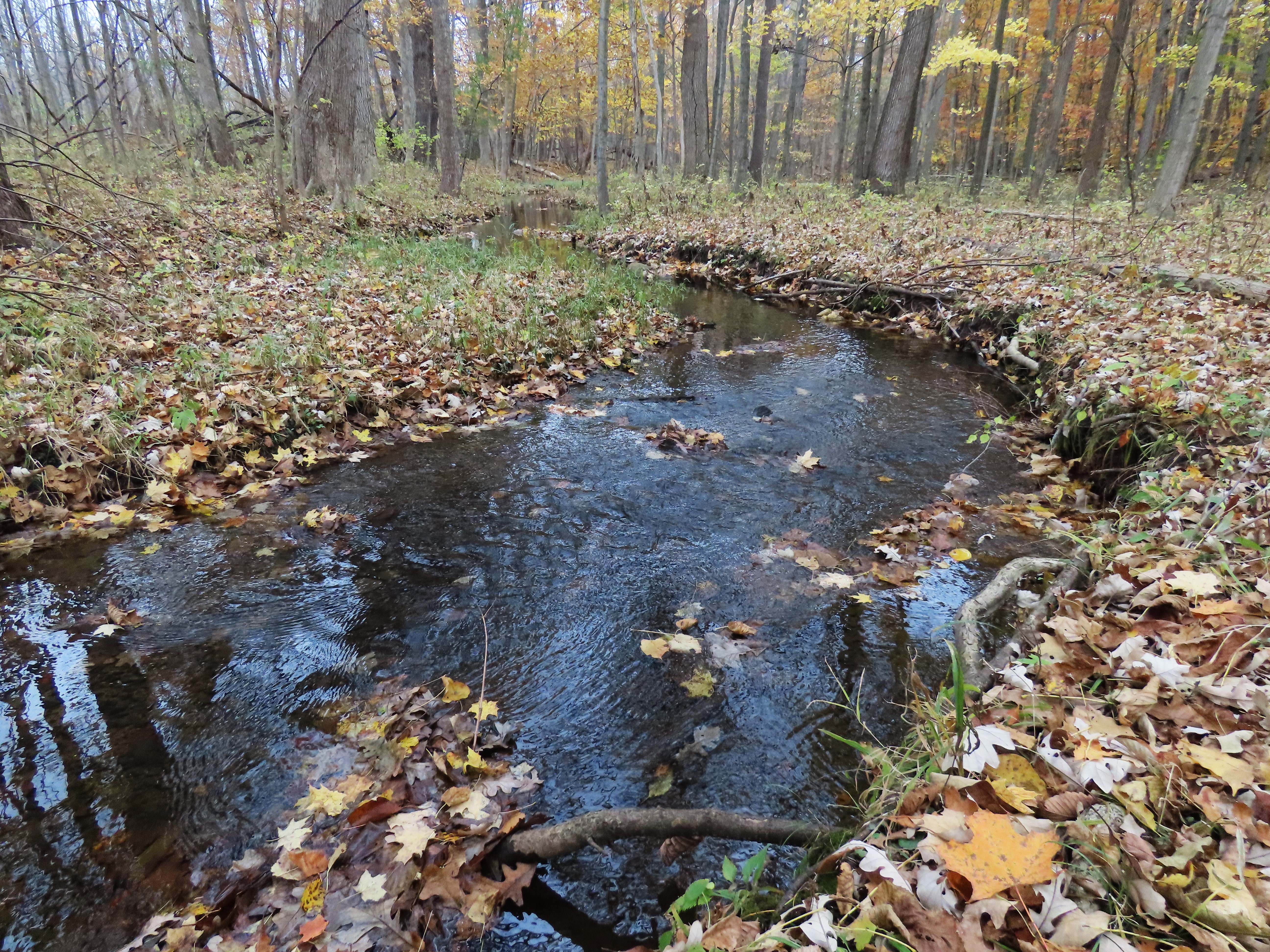 It was a perfect day for our farewell to October hike. Colorful leaves blanketing the forest floor created a spectacular multicolored quilt of every imaginable shade and shape as each gust of wind sent more leaves drifting, and at times seemingly dancing downwards, adding to the masterpiece. One of the tree species found along that trail system is the sassafras tree. There were so many leaves on the forest floor quilt that it took a few minutes to search out the three different leaf shapes of the sassafras and line them up for a photo, but we did: the three-lobed leaf, the ovate lobe-less leaf, and the two-lobed leaf that resembles a map of our lower peninsula.

Most of our five mile meander was through the 445 acres known as the Shelden Trails, part of the former estate of the Shelden family, the final property that became part of Stony Creek Metropark back in 1981. The trails took us through mature forests, across open meadows, around kettle lakes and swamps and over kames. Kames are conically shaped hills composed primarily of water-rounded sand and cobbles deposited by icy melt water streams that flowed downward through shafts in the rapidly melting glacial ice. The presence of kames attracts mountain bikers and hikers that want a good leg and lung workout.

We took a short “sit back and look about break” near the stone walls and steps of the estate where we noted non-native tree species planted by the Shelden Family, trees that now look out of place in the natural landscape, but add to the rich history of the park. The Shelden Family had a philanthropic legacy that continues today through the Shelden Foundation. Elizabeth Shelden penned these words in reference to where we hiked: “… it is a considerable consolation to me to know that after my death the property will be used for park purposes for which it is already so beautifully adapted.” 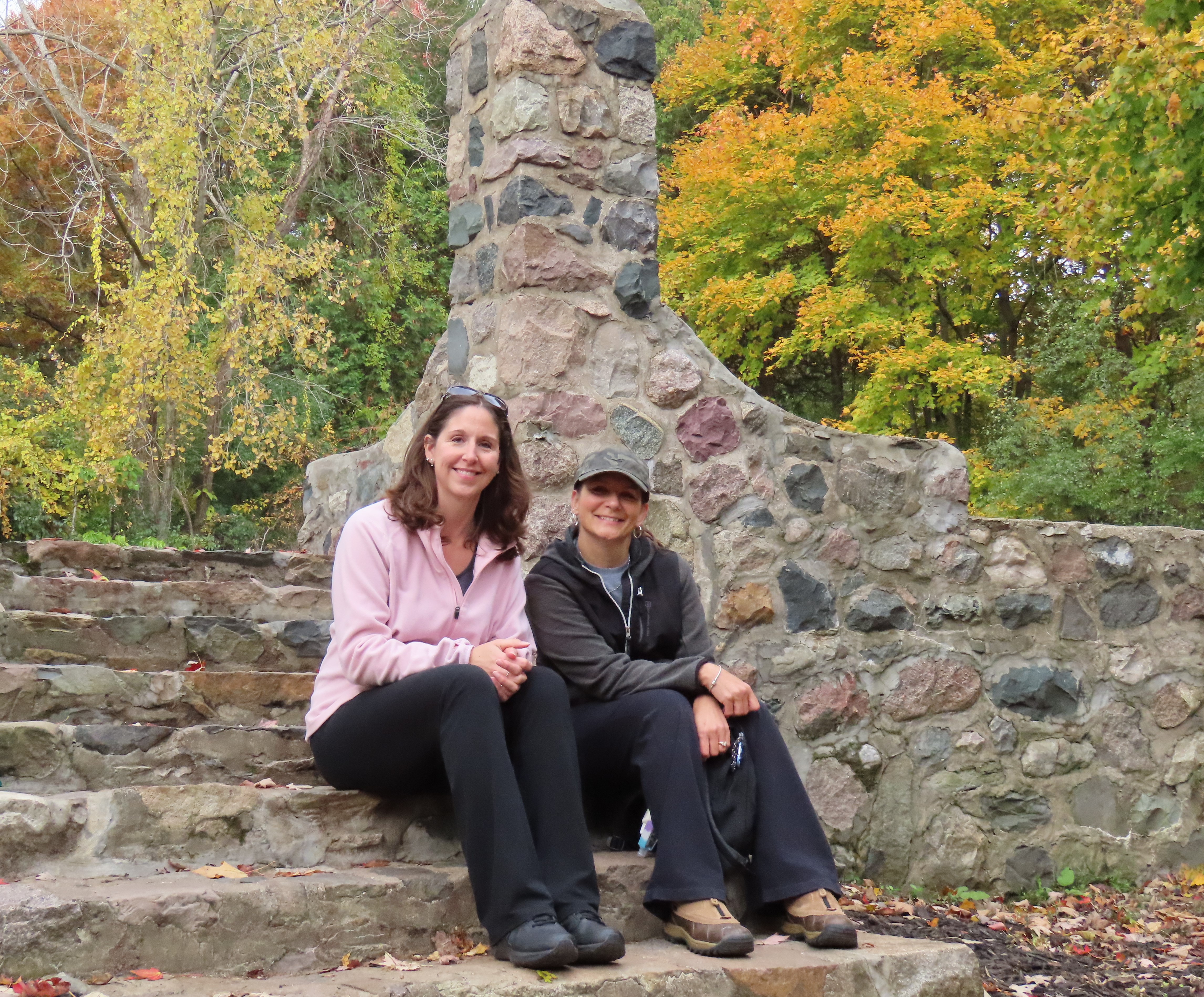 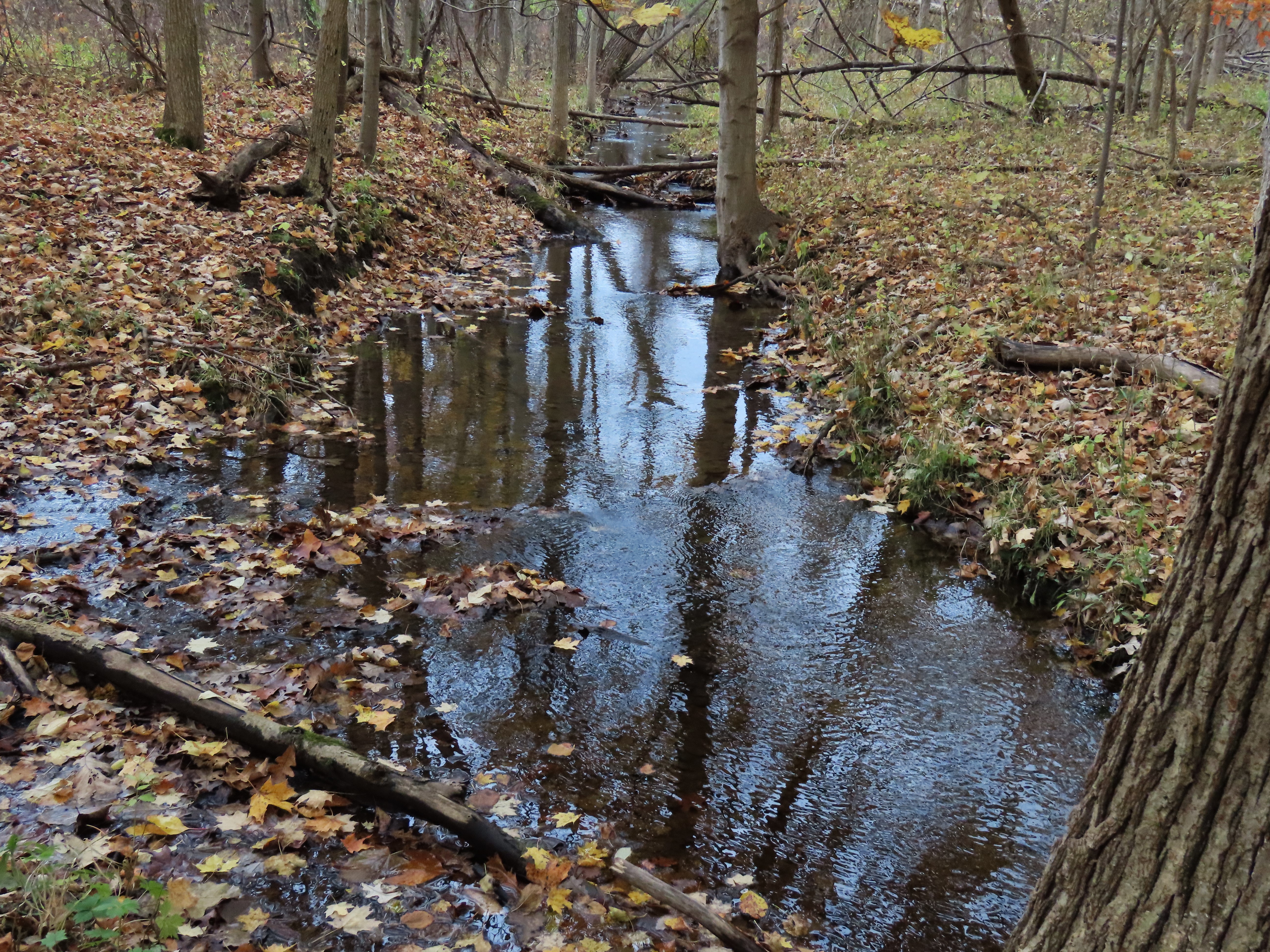 A few years ago, at a nature related conference the acronym FBI was brought to my attention as a way to describe, Fungus, Bacteria and Invertebrates, elements that keep our woodlands healthy and productive. Without the “FBI,” nature’s “department of decomposition,” fallen leaves, branches and downed logs would not break down, resulting in poor forest health, and many species of creatures could not survive. One of them is the red-backed salamander, an amphibian totally dependent on cool, moist forest habitat to survive. Unlike most species of amphibians in Oakland County, the tiny, almost worm-like, red-backed salamanders do not head to vernal ponds to lay eggs. They search for a suitable location under thick carpets of decaying leaves and rotting logs for egg laying and winter hibernation, making much of Stony Creek perfect habitat. On a whim, I gently rolled back one small streamside log as I explained the FBI process and the value of decaying logs to my ICU companions. Much to my surprise, we saw a red-back. The log was returned ever so carefully to its original position and we hiked on, chatting about wood frogs and gray treefrogs, two other amphibians also dependent on the FBI for their survival.

Fantastic fall fungi of every size and shape flourished, but what really caught our attention was one of my favorite mushrooms of autumn, the Pear-shaped Puffball (Lycoperdon pyriforme). The “puffing” dispenses spores and requires an outside mechanical force such as a squirrel, raccoon or deer stepping on or brushing against it, but in this case, one of my outdoor adventuring ICU nurse companions gently squeezed the soft fruiting body so I could create a video of spore dispersal.

Colorful lichens flourished on tree trunks, branches and exposed glacial boulders. Lichens are very hardy organisms comprised of an alga and a fungus that “live” together in a symbiotic relationship. The alga converts sunlight to energy through photosynthesis and provides food for the fungus while the fungus provides physical support and keeps the alga from drying out. You could call it a perfect marriage made in nature’s biological heaven. Although I am not experienced in identifying exact species of lichen, the one photographed is a rather common foliose (leaf-like) lichen.

Yellow birch trees thrive near cool water streams and as we hiked close to the banks of Stony Creek, we admired their curly, pale yellow bark against the colorful backdrop of autumn. One in particular helped stabilize the banks of Stony Creek with its large roots and added stunning beauty to its very popular multi-use Metropark wildland that connects two counties. These early days of November are not the time to stay indoors. It’s a perfect time to get that healthful up north feeling. Perhaps consider Stony Creek for your next nature-embracing adventure on the wilder side of Oakland County, for as Henry David Thoreau once penned, “Live in each season as it passes; breathe the air, drink the drink, taste the fruit, and resign yourself to the influence of the earth.” 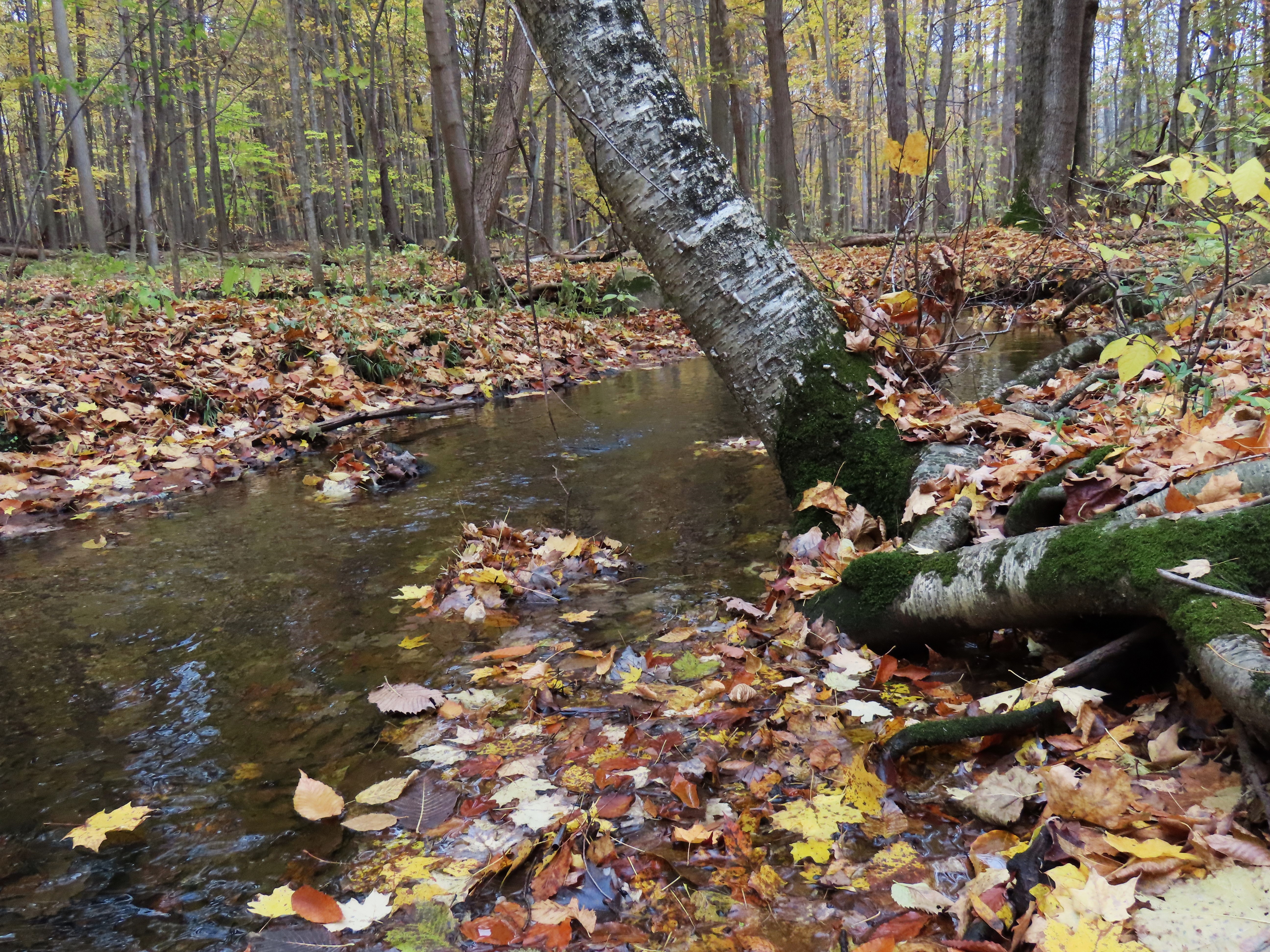