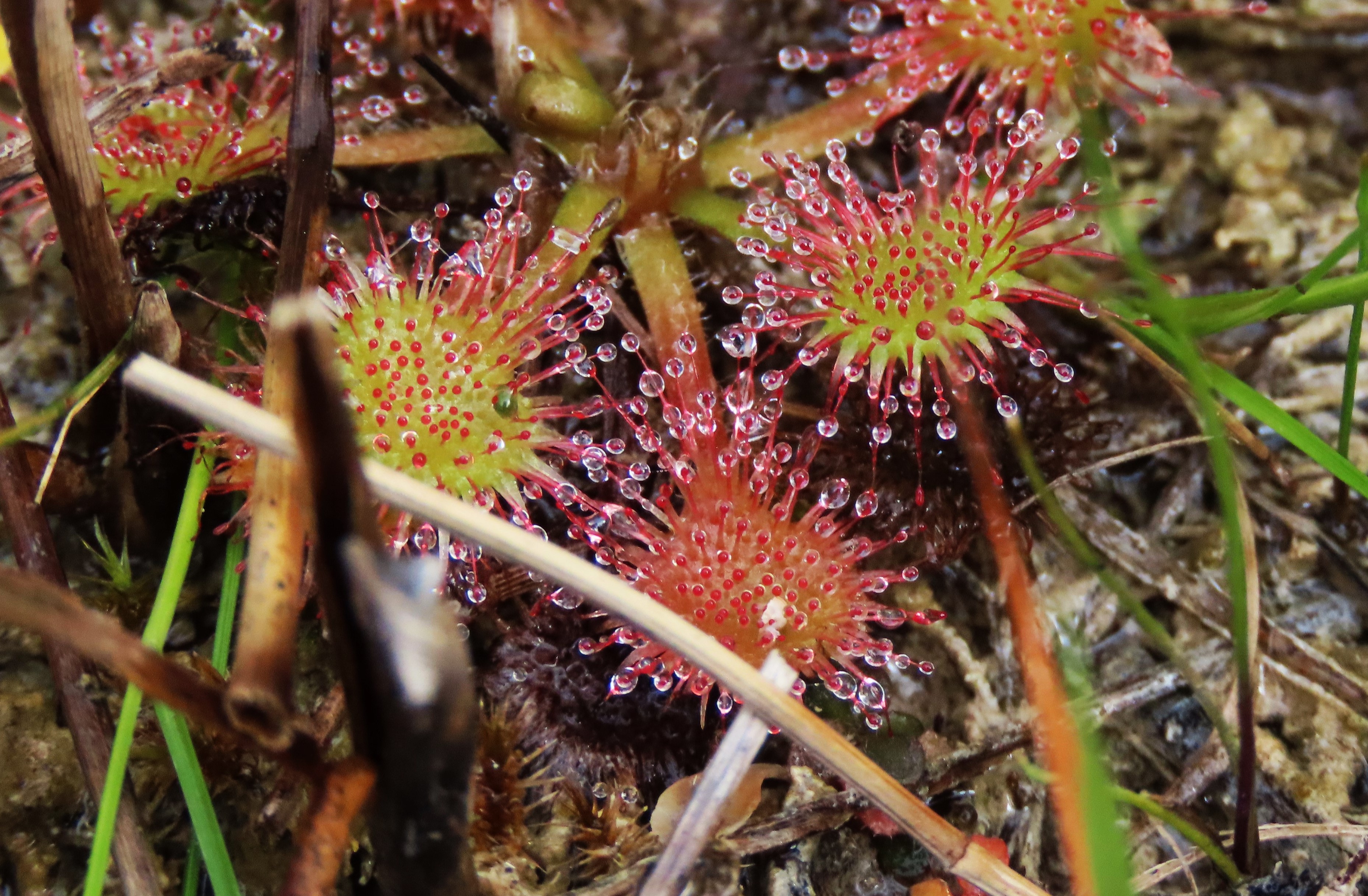 The Ice Age was coming to an end. Shuffling its 6-ton frame, a shaggy mastodon laboriously crossed a steep esker and trudged towards melt water from a giant block of ice left behind by the Pleistocene Era’s last local retreating glacier. The mastodons that once roamed Oakland County are now extinct, but the glacial evidence of nature’s land sculpting power is unmistakable in many sections of our county. Some of those sites, that once provided habitat for Mastodons, now harbor carnivorous flora and rare secretive creatures. One of those locations is within the Shiawassee Basin Preserve, a 600-acre site in northwestern Oakland County managed by Springfield Township Parks and Recreation. 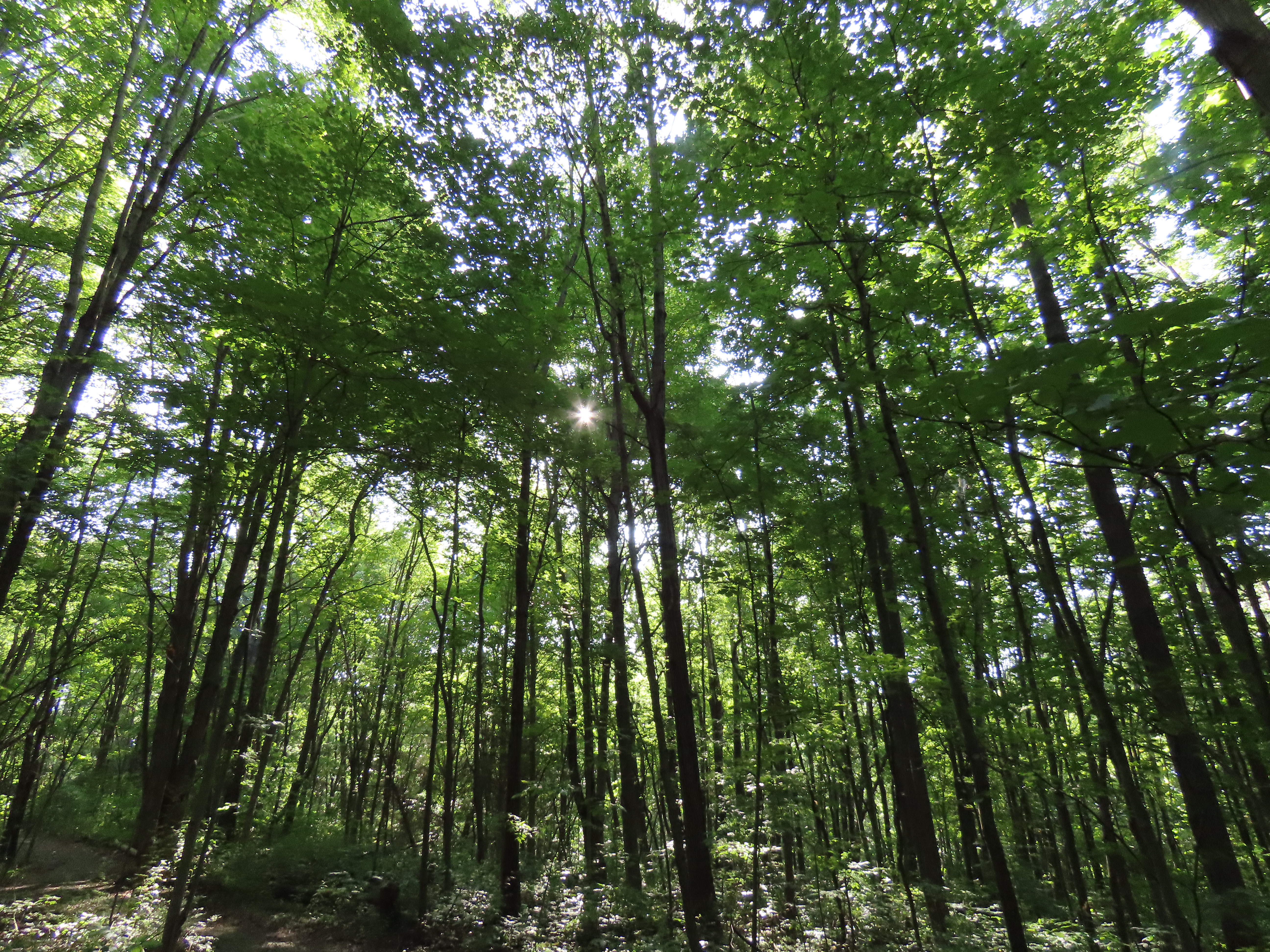 With those thoughts of historical perspective and nature’s hidden wonders in mind, I joined Mike Losey, the Natural Resources Manager of Springfield Township Parks and Recreation, and a half dozen others for a “Conservation Tour” exploration of the Long Lake Nature Area, a wilder section of the Shiawassee Basin Preserve. 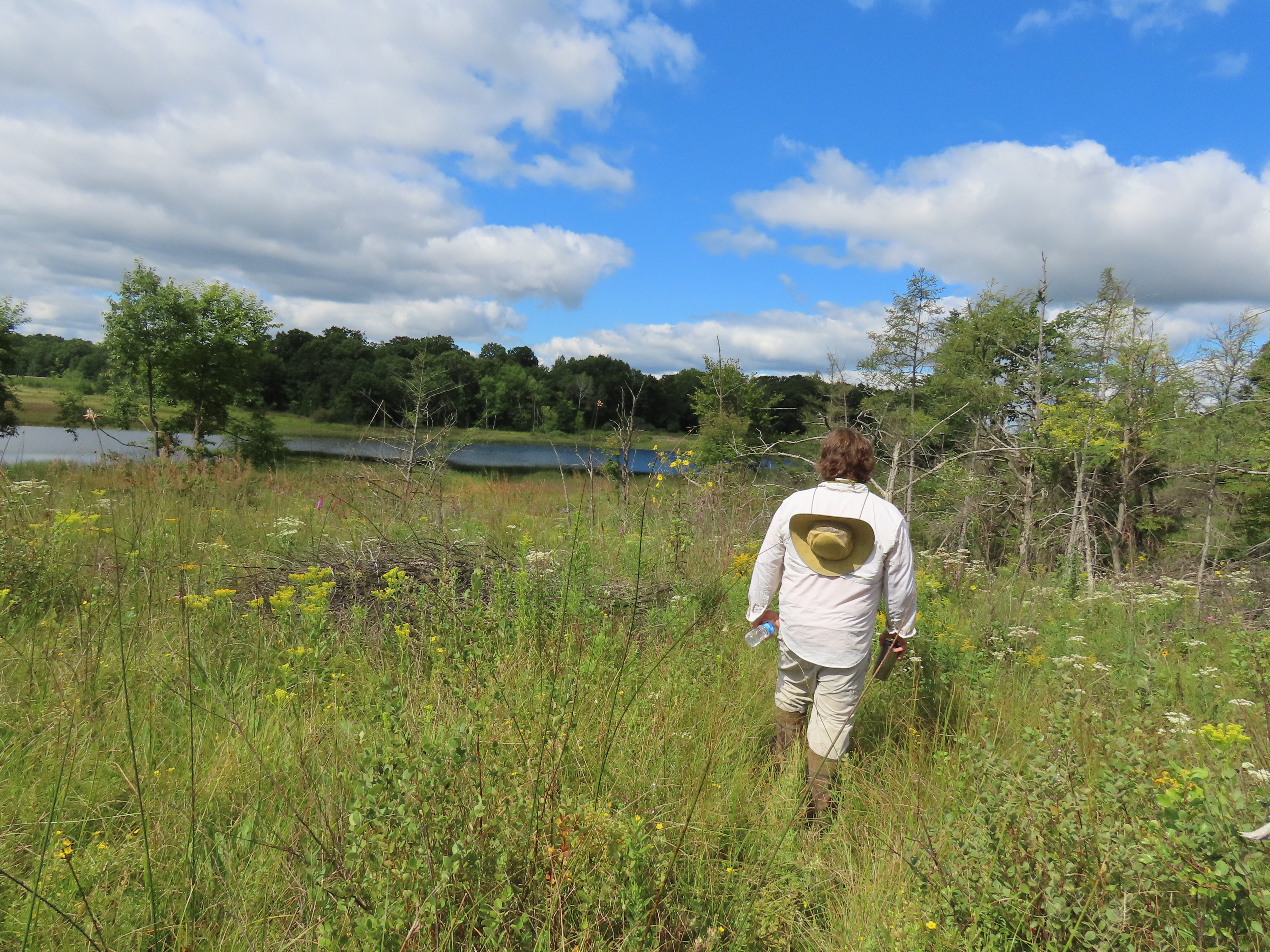 It was a beautiful Saturday morning last weekend and we hiked for about 20 minutes through woodlands to reach a clearing with a view of Long Lake, the real starting point of our adventure. We were greeted by a pair of Trumpeter Swans. It was a delightful start for our nature embracing adventure and Losey was the perfect interpreter of the ways of nature. 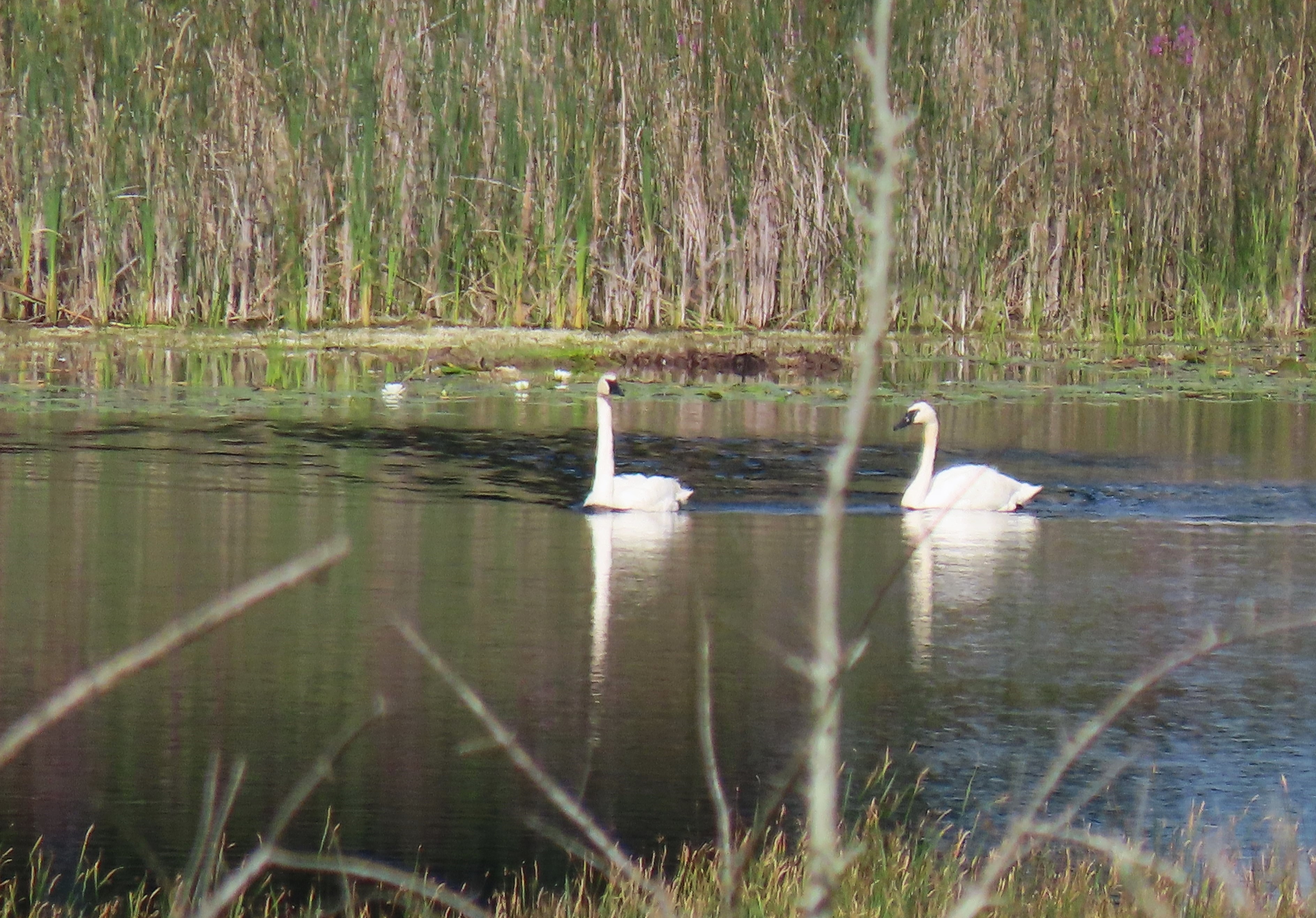 I knew my feet would get wet, for we would be trudging along quietly and inquisitively, exploring as we went, in a protected prairie fen above the lakeshore habitat that includes eastern massasauga rattlesnakes, poison sumac and carnivorous plants. It’s the kind of place that brings a smile to those that are passionate about wild nature. My only disappointment of the day was we failed to see a massasauga rattler, even though the fen habitat we explored is a stronghold location for Oakland County’s only venomous reptile. Still, I came home with great memories and unexpected photographs, all of which were gathered in about a 5-acre section of the 600-acre site. I can only imagine what secrets await in the remaining 595 acres. 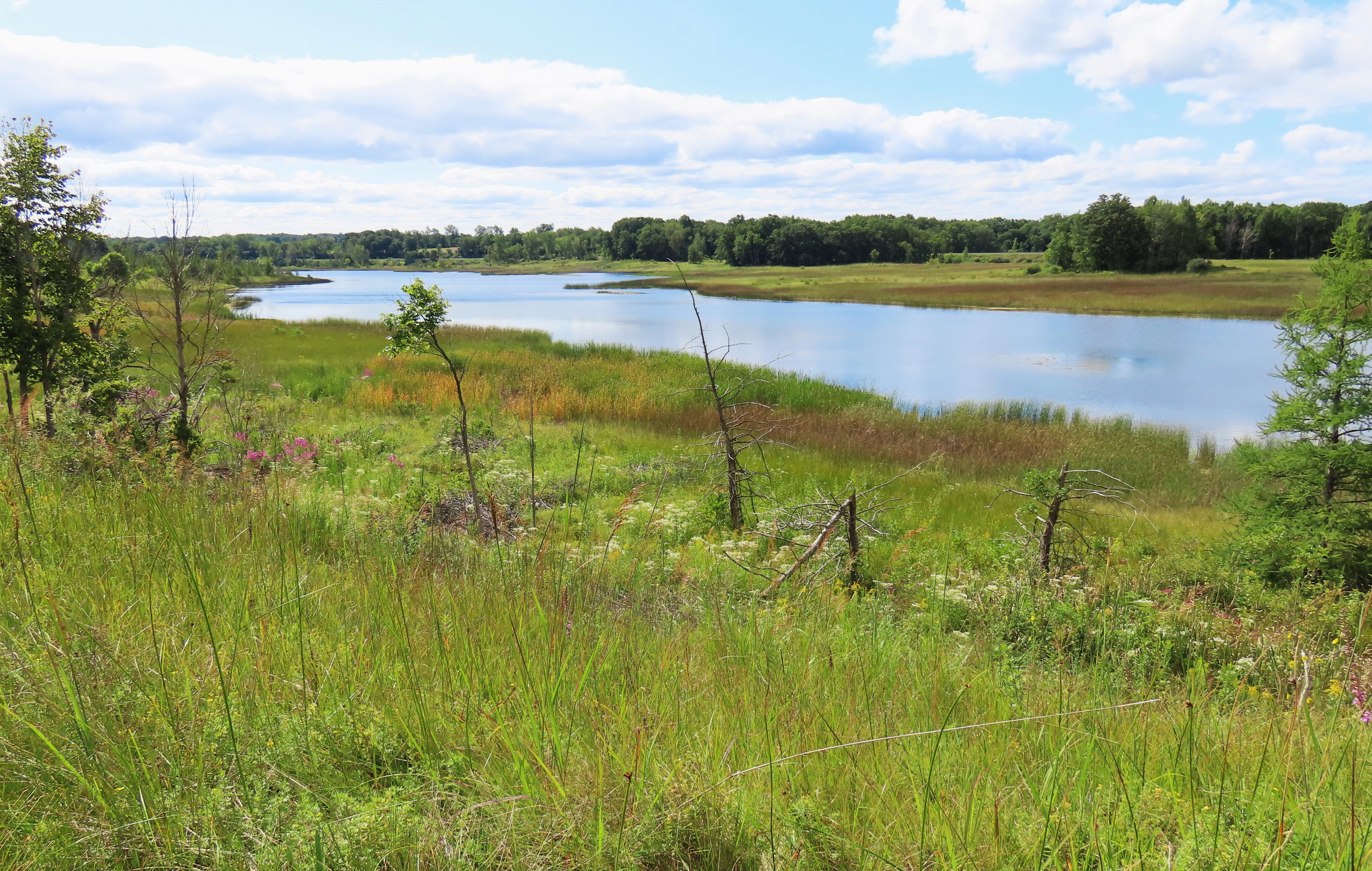 Today’s Wilder Side of Oakland County blog post focuses on those five acres, part of a large pristine fen that is rare for a wetland in Oakland County: a wetland that in this case exists on the slope of a hillside well above the lake level. Losey explained, “The prairie fen that we are touring is part of larger wetland complex known as the Long Lake Nature Area and is one of the largest and highest quality prairie fens in the state at over 300 acres and more than 150 species of plants are known to occur here.” 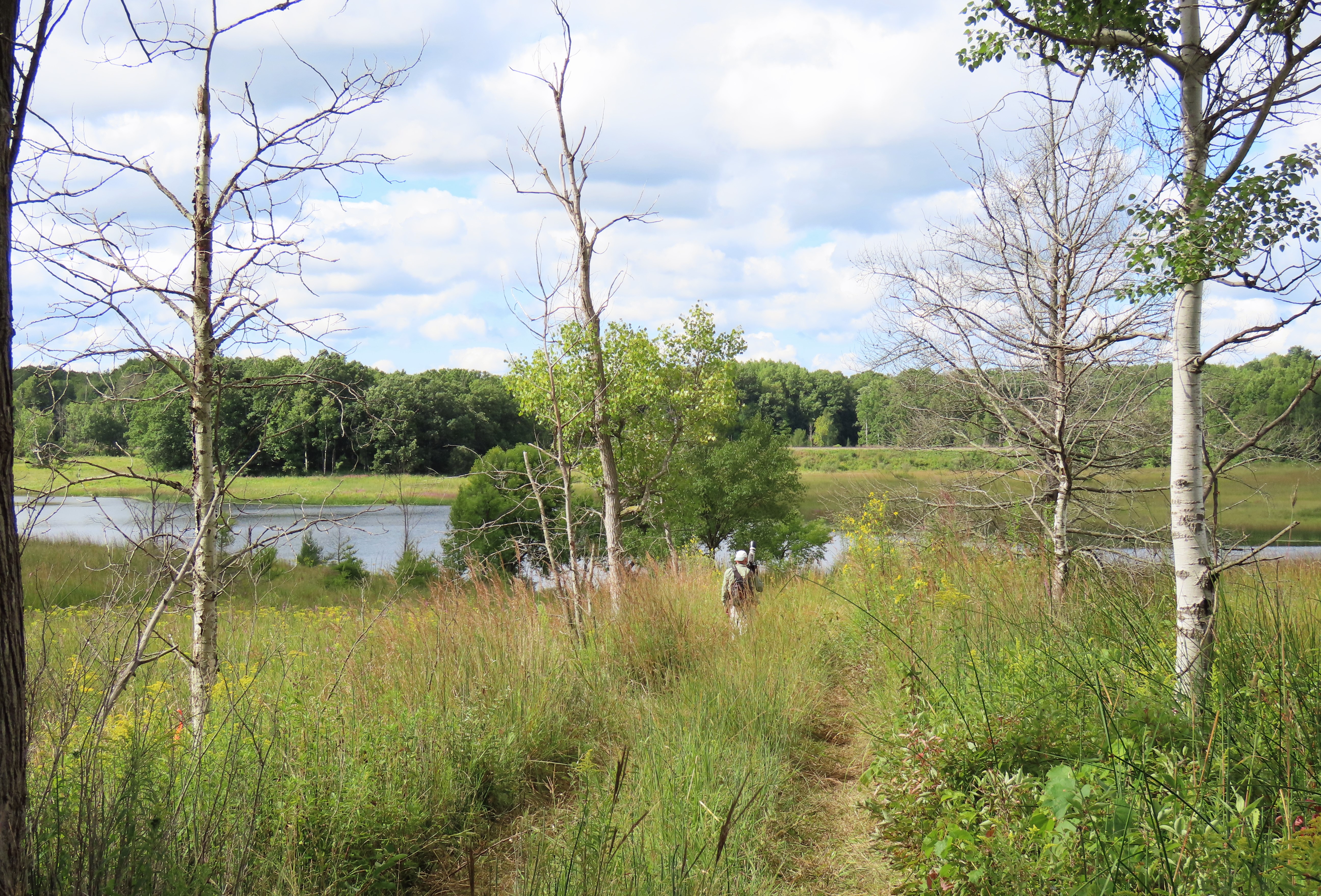 The Michigan Natural Features Inventory (MNFI) clarifies the type of fen we explored this way: “Hanging fens occur as low-gradient slopes of organic soil that can span from the upland edge of a fen to a stream or a level area such as a marl flat. Both domed fens and hanging fens can puzzle observers who are not accustomed to seeing wetlands occurring as hills and sloping terrain.” It’s fair to say I too was puzzled by a wetland on a sunny slope, but with my feet quickly soaked, well before we reached the shoreline of Long Lake, and flowing water emerging from the ground in multiple locations, those words from MNFI offered physical confirmation.

A field of wildflowers, stirred into motion by a gentle breeze, were blooming on the hillside, including Marsh Blazing Star, Tall Sunflower, Grass of Parnassus, Blue Lobelia and a white form of Blue Lobelia, something I had never seen before. But what really captured my attention, thanks to the keen eye of Losey, were the tiny sundews, one of two bug-eating species of plants that thrive in this fen. That was my first ever encounter with sundews.

Sundews grow in rather infertile soil so they must gather nutrients in another way, and wetland habitats provide endless supplies of small insects lured in by trickery, scent and perhaps curiosity. At first glance, the leaves of the sundew appeared to be covered with droplets of dew, but that was not the case. They are an absolutely stunning species in the mid-morning light. The National Wildlife Federation describes the droplets and their “hunting” technique this way:

Sundews are “flypaper” plants that trap prey in sticky hairs on their leaves. They make up one of the largest groups of carnivorous plants. Long tentacles protrude from their leaves, each with a sticky gland at the tip. These droplets look like dew glistening in the sun, thus their name. The glands produce nectar to attract prey, powerful adhesive to trap it, and enzymes to digest it. Once an insect becomes stuck, nearby tentacles coil around the insect and smother it. 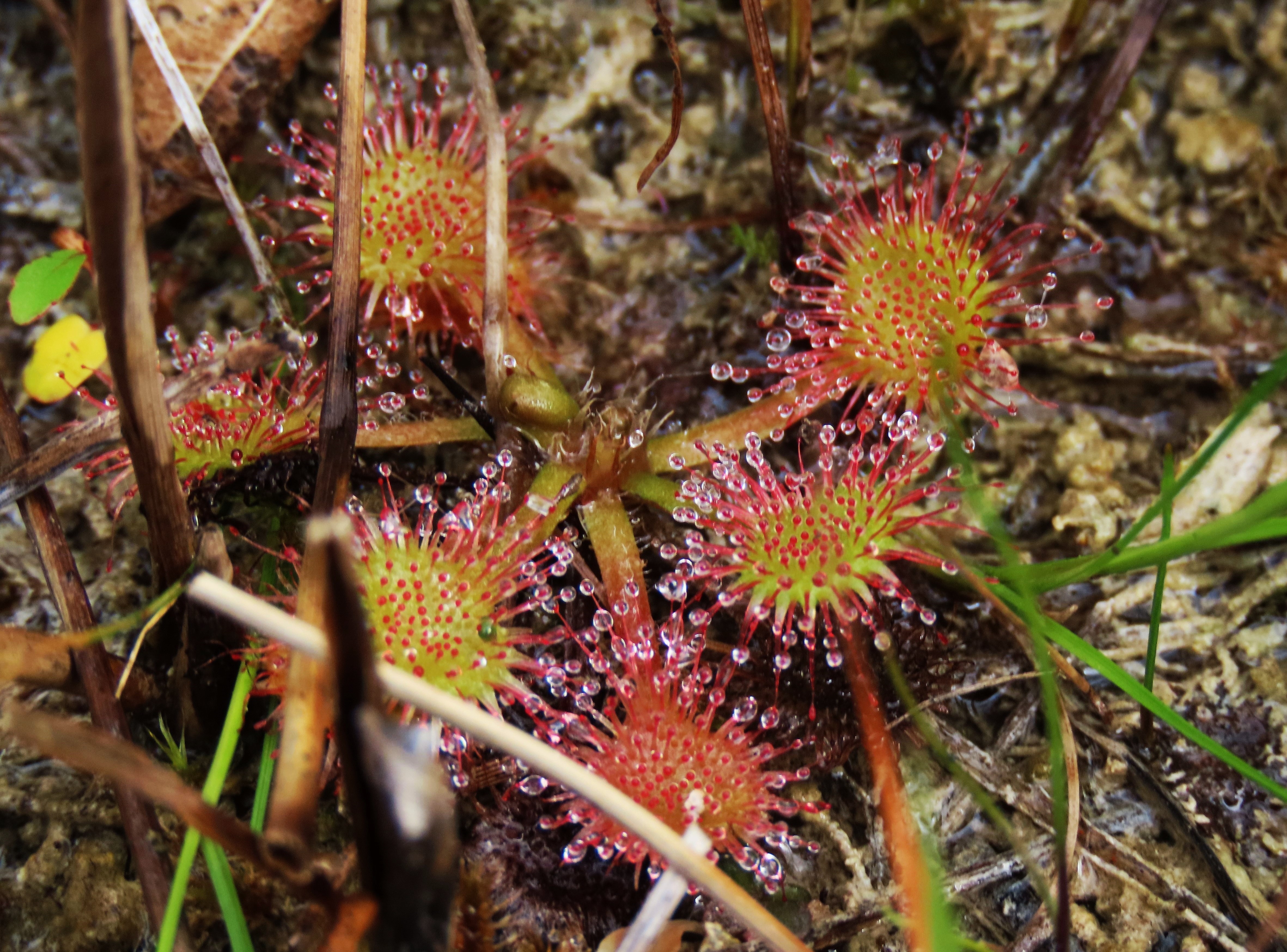 Within inches of the sundews were clusters of a far more commonly known bug-eating species, the pitcher plant, another fen plant that needs to passively “hunt” to survive. Their capture and kill technique is described in the following way by the North Oakland Headwaters Land Conservancy:

The Pitcher Plants consume their prey when they are attracted to the modified leaves or tubes of the plant and fall down into the trap but are unable to escape due to the downward facing hairs on the inside of the pitchers. The tubes are filled with fluid containing digestive enzymes which slowly consume the insect, spider or even the occasional frog in a potent soup providing all the nutrients for the plant to flourish.

Just as I finished photographing a small cluster of pitcher plants, something strange caught my eye that looked like two small ceramic jugs fastened firmly to the stem of one of the pitcher plants. I knelt down for a closer look. After the fact research with entomologist Howard Russell, also known as the Bug Man of Michigan State University, confirmed I had discovered the skilled craftsmanship of a Potter Wasp, a seldom noticed wasp species that creates a nest out of mud and attaches it to a twig or stem. Here’s the cool part and it would not make a good bedtime story for a nightmare prone child. As the pot nears completion, the wasp lays a single egg attached to the inside surface of the nest. The wasp then delivers a beetle larva or caterpillar that had been paralyzed by a sting to the pot and seals it with a clay plug, leaving the hapless paralyzed prey to await being devoured alive by the wasp’s hatchling larva. Additional research also confirmed my suspicion the tiny hole near the top is where a fully developed wasp made its exit after finishing its meal within the artistically created miniature pottery. 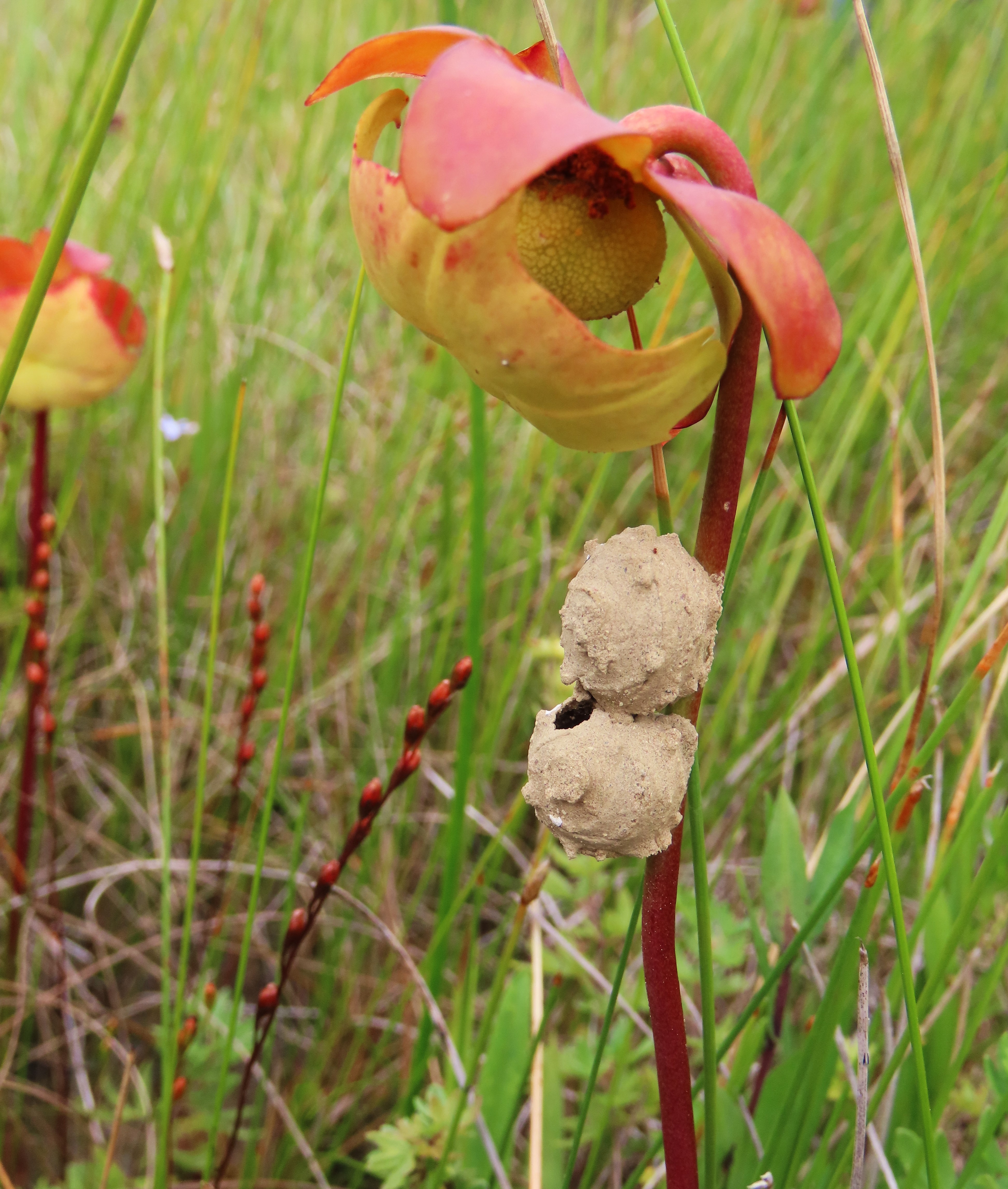 After several hours in the fen it was time to start our trek back, but not without one last unplanned encounter at the edge zone between the wetland and the woods: poison sumac (Toxicodendron vernix) was already dressed in its scarlet colors for fall. Poison sumac is a very attractive and rather common tree-like shrub that thrives in wetlands and swamps in Oakland County and may grow to be over ten feet tall. The leaves are often at face-slapping height and that can be problematic for those that don’t recognize the plant. Within minutes of contact with the unsuspecting hiker’s skin, urushiol, the same substance found in poison ivy, begins to be absorbed. 12 to 72 hours later, a blistering, itchy rash appears, a painful reminder that situational awareness is needed whether hiking at a busy park, or exploring one of the most beautiful fens in Michigan on a sundew kind of morning. 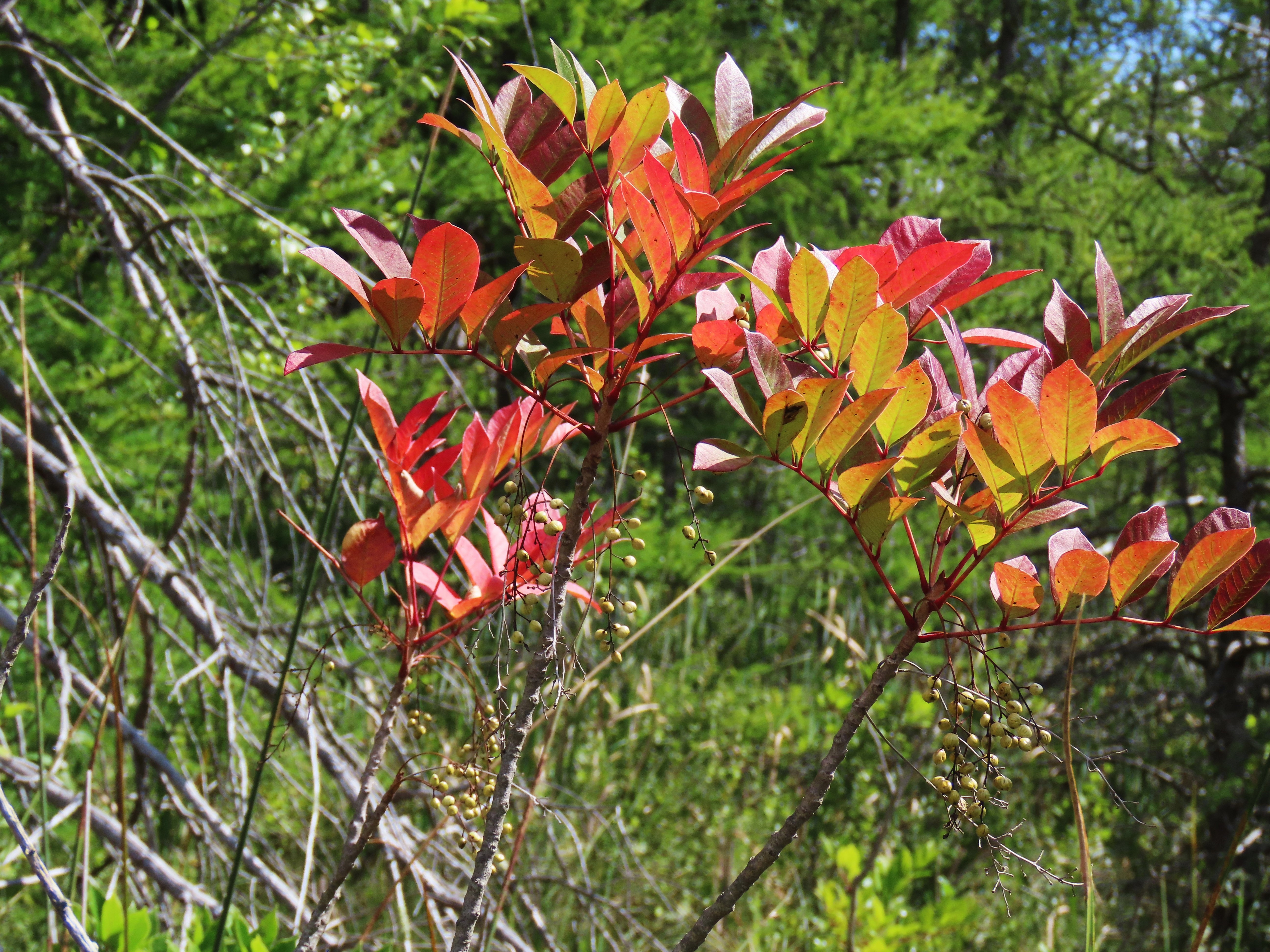 UPCOMING SHIAWASSEE BASIN EVENTS: If this wilder side adventure sounds good to you, there are three more Conservation Hikes open to the public within the Shiawassee Basin Preserve. “Birding at the Shiawassee Basin Preserve and Davis Lake Overlook,” cosponsored by the North Oakland Headwaters Land Conservancy, will occur on September 14th and September 28th from 8 a.m. until 10 a.m. October 19th brings “Exploring the Davis Lake Overlook”, a one hour, one mile family friendly hike at 11 a.m. For event details and meeting locations, email Mike Losey: mlosey@springfield-twp.us.

Visit the Springfield Parks And Recreation website for detailed information on their park system, outdoor recreation, festivals and other upcoming nature activities in Springfield Township.