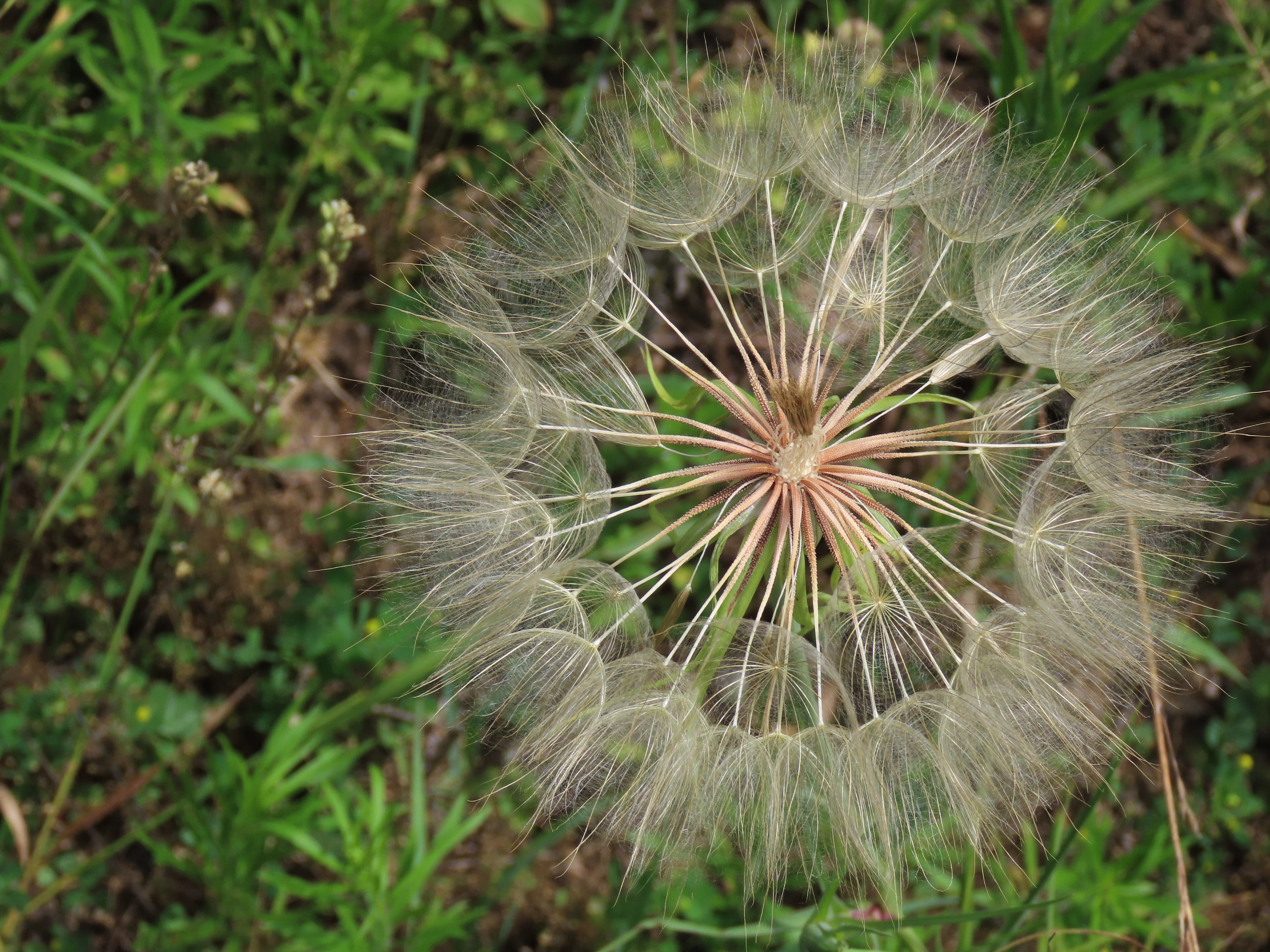 In the sultry days of August, meadows, fields and un-mowed roadsides of rural sections of Oakland County present colorful potpourris of wildflowers of every size and shape. Many are native species, others are naturalized plants that crossed the oceans with early immigrants and now thrive in our midst. The flowers attract butterflies and insects of all sorts, as well as human admirers. Among the mix in Oakland County is Tragopogon dubius, a lesser known species with several common names including yellow goat’s beard and yellow salsify. It’s an attractive, but rather unremarkable yellow flower whose presence often goes unnoticed; however its three to four-inch globe-shaped seedhead is eye-catching and resembles a giant dandelion on steroids. And when the sunlight hits the seedhead just right, it’s stunning. 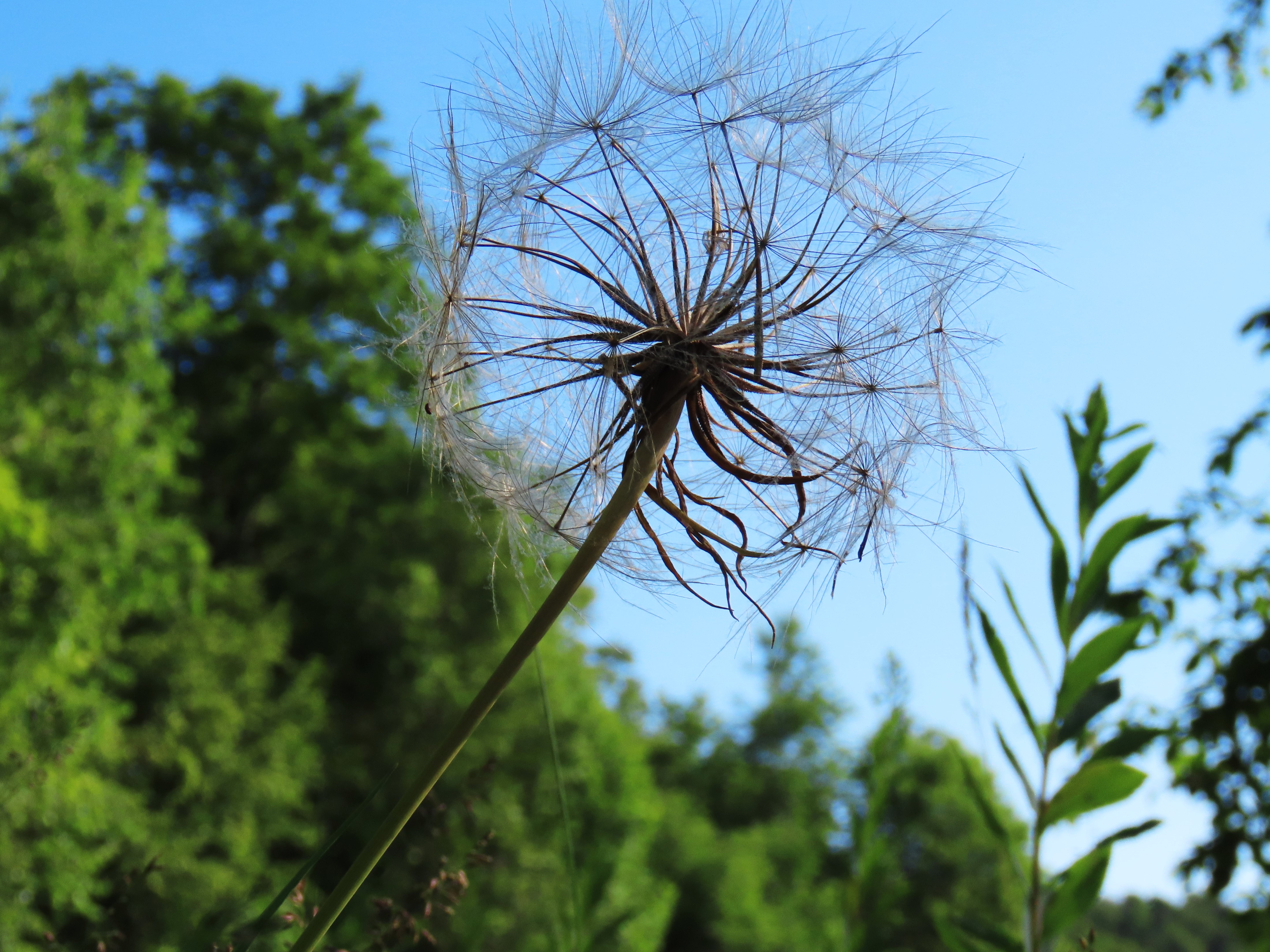 This is the season when questions about the seedheads, sometimes accompanied by a photo, drift my way. “Is this some sort of giant dandelion?” or “What is this thing?” are variations of the questions. And if by chance I’m hiking in a field with others and little kids are in tow, they don’t ask a thing. They simply rush over to the giant seedhead and blow on it just as they would with a dandelion. FACT CHECK: A gentle puff will send dandelion seeds into flight. Not so with goat’s beard. I’ve tried it. 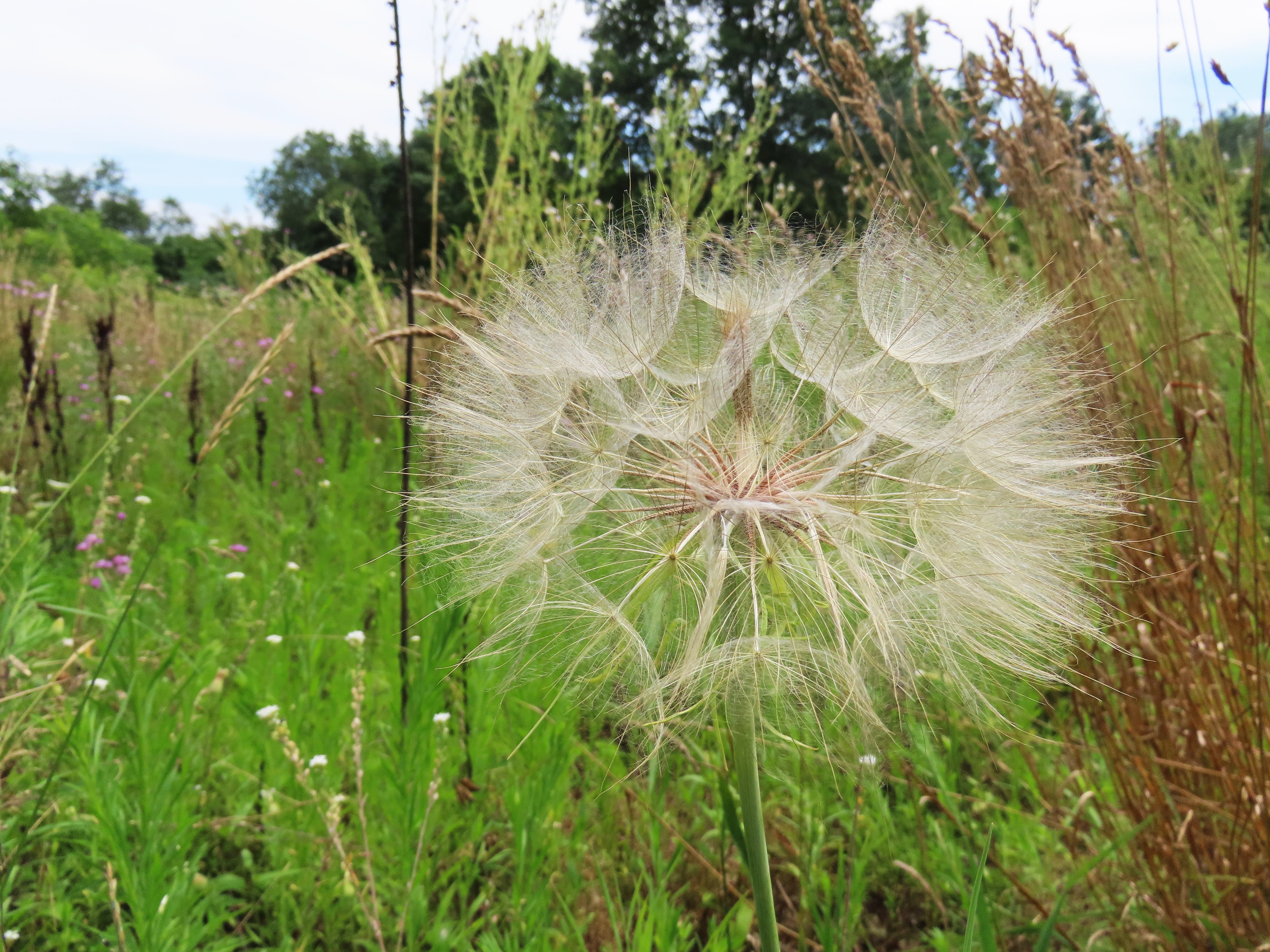 Yellow goat’s beard is a “relative” of our common dandelions and are in the same family, Asteraceae. Unlike dandelions that thrive in lawns no matter how hard homeowners wage war on them, goat’s beard grows in meadows, fallow farm fields and disturbed soils such as along the edges of railbeds, hillside washouts or even in new septic fields that captured seeds drifting in the winds. They would never survive in a suburban lawn, for they don’t flower until they are several feet tall and would succumb to whirling blades way before the seedhead forms. 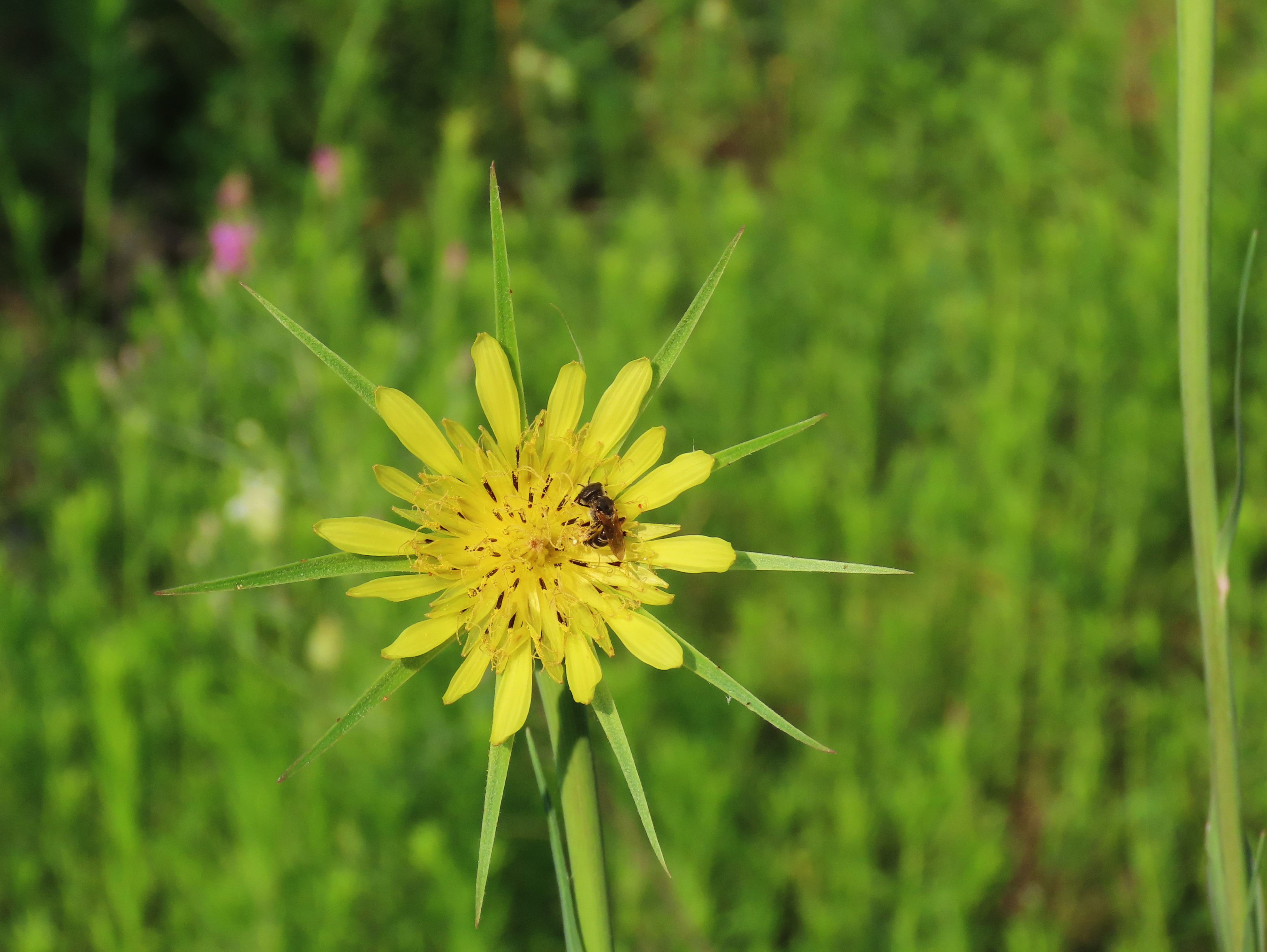 Searching for the flowers can bring a surprise. They open in the morning, but by early afternoon they are closed, which explains another rather odd common name for the summer flower that I discovered in a literature search that sent me to the Ohio Perennial and Biennial Weed Guide: “Go-to-bed-at-noon” flower. Somehow, I just can’t see someone saying they are looking for a “go-to-bed-at-noon” flower. But I will confirm the yellow blossoms that attract bees and other insects do disappear in the afternoon, a fact I noted when taking photos. Ohio State University also confirms something else that I have noted about these flowers, “Flowers open and face the sun each morning, twist slightly as they follow the sun until midday, and generally close in the afternoon.” That behavior of the flowers make them easy to photograph with the sun at one’s back and the flowers illuminated in the dawn’s early light. 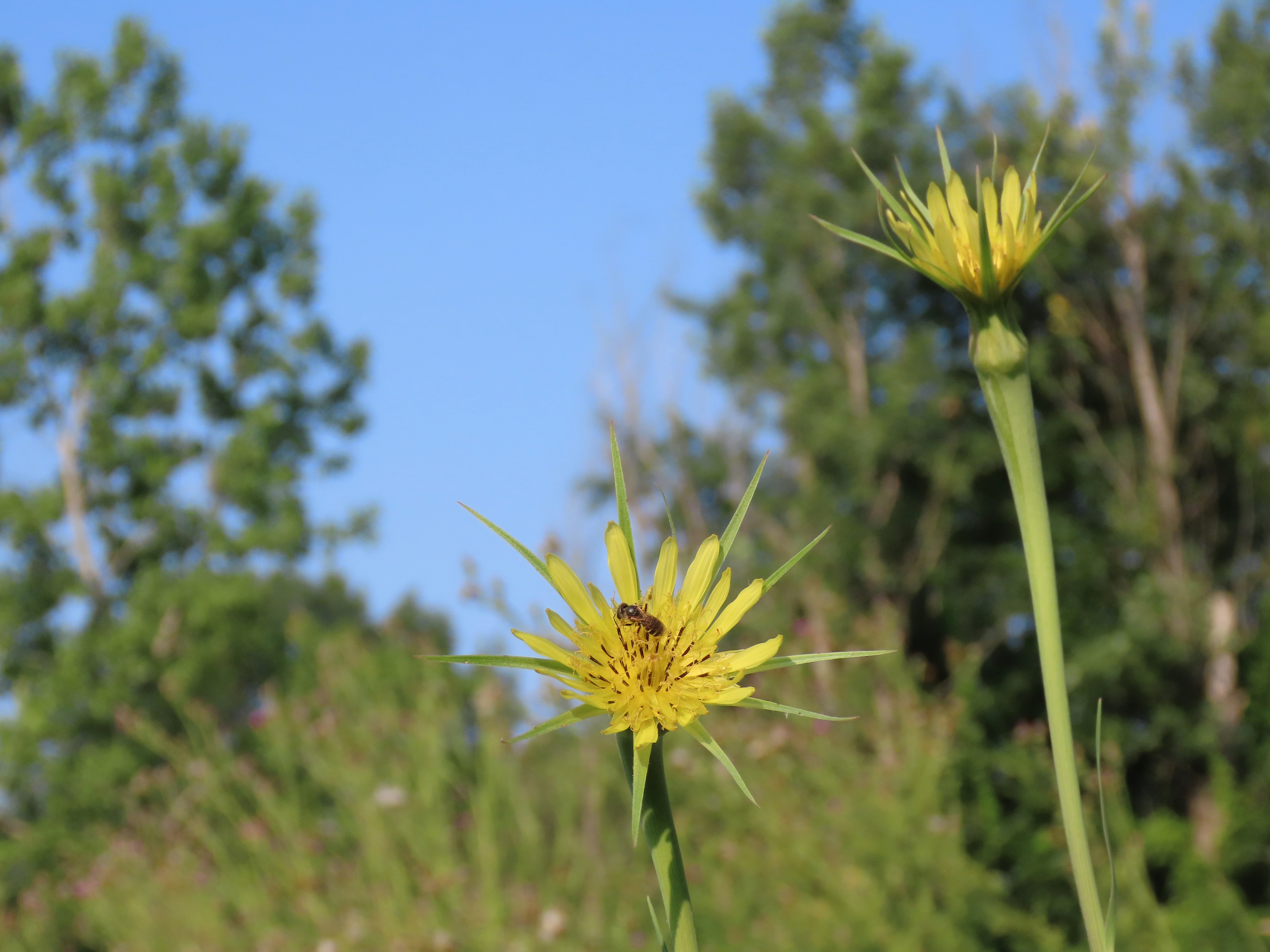 Goat’s beard began blooming in Oakland County last month and will continue to appear well into September creating those short lived, but rather dramatic looking seedheads. The open seedheads don’t last long and often disappear the same day they appear; for that is nature’s design and winds send them into flight. They are quickly dispersed by wind with the aid of what a botanist would call a “pappus,” a parachute-like feathery structure that also aids dandelions in seed dispersal, giving them an aerial lift to a new location. However, unlike dandelion seeds that may climb rapidly in the air and travel far and wide, the relatively heavy and long seeds of goat’s beard do not travel far, limiting the range where they grow. The seeds are also large enough to be of interest to seed eating birds and even small rodents.

The more I researched goat’s beard, the more I discovered additional common names for it, including “Wild Oysterplant.” Another common name I found and liked is when it is written as one word, “goatsbeard.” The Nebraska Extension of the University of Nebraska states:

“As with many of our weed species, Yellow Goatsbeard came to the US with immigrants and was planted as a food source. It is also known as Yellow Salisfy, Western Salsify and Wild Oysterplant. The name Wild Oysterplant is indicative of the role this plant played as a food source. The long taproot is purported to have a taste reminiscent of oysters.”

I opted out of that taste test, with oysters not being on my favorite seafood list. I also noted that when the stem is cut a sticky white sap emerges from its hollow inside, a second reason I opted out of the taste test. 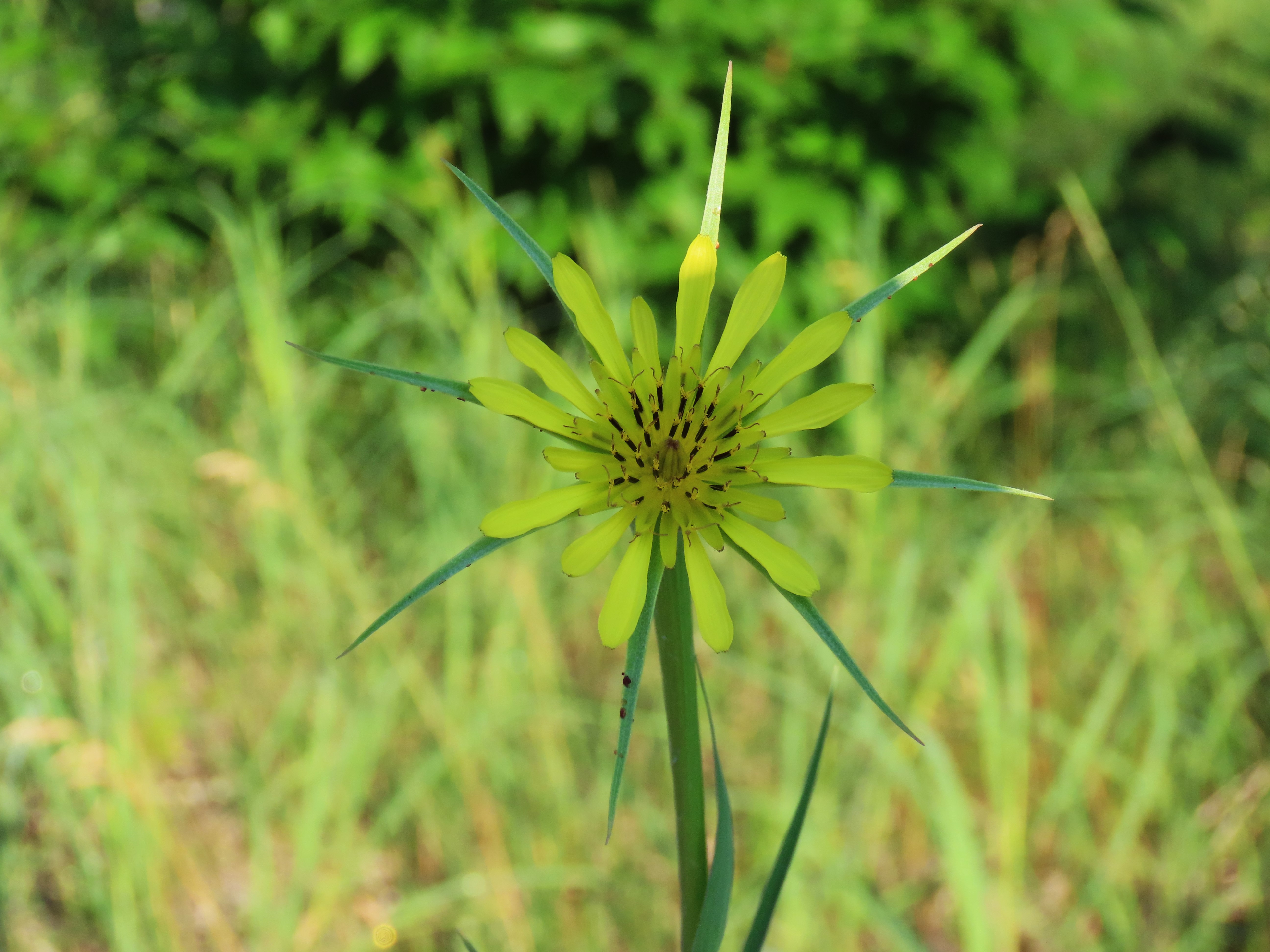 Nature’s Garden, by Samuel Thayer, states the new shoots, flower buds and flower stalks are all not only edible, but delicious. However, with conflicting edibility information on this plant and its close kin, Tragopogon pratensis, and difficulty in identifying the emerging plant when neither the flower nor seedhead is present, I simply enjoy the impressive seedheads as a visual treat of the wilder side of Oakland County and return to my garden for vegetable treats. That to me seems like the wise thing to do.