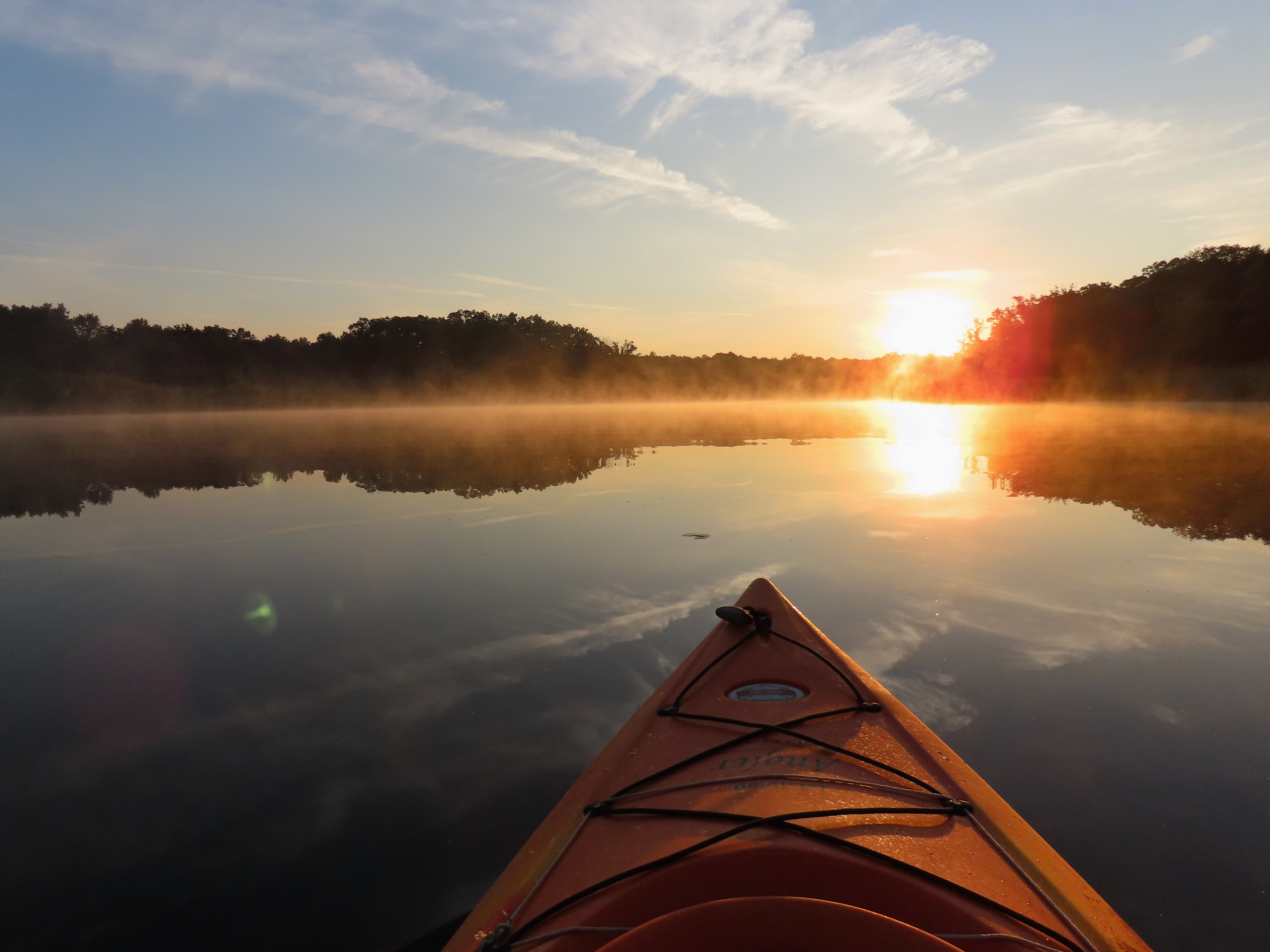 Summer is firmly taking hold on the wilder side of Oakland County. It’s a time for exploration and discovery, and without a doubt, it’s the perfect time to greet the sunrise while most of the human world is sleeping and the air is still cool. And so last Saturday morning, just a few hours after the last of the fireflies flickered in my meadow, I strapped my kayak into its carrier and headed for East Graham Lake in the Bald Mountain State Recreation Area. Although the drive took only twenty-five minutes, it felt like I had escaped to a far away hideaway. 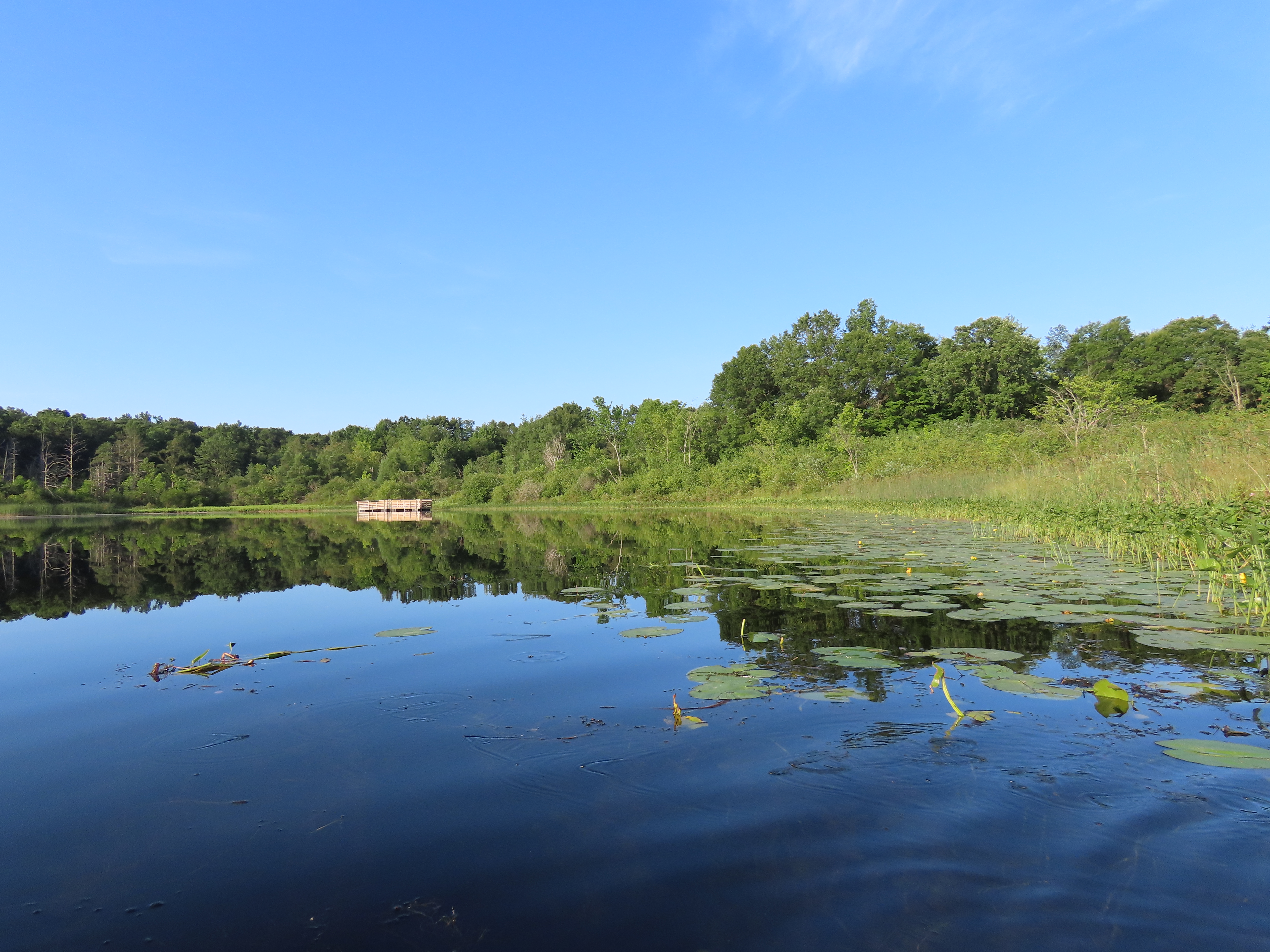 Bald Mountain is a 4,637-acre State Recreation Area managed by the Michigan Department of Natural Resources. It is split into two units with the southern unit divided by M-24 in Orion Township. The Graham Lakes, my destination, are located in the northern unit. This map from the Michigan DNR shows the sections and the access point off of Predmore Road that leads to a small public boat launch. Note: A state recreation passport/license tab is required to access the site.

East and West Graham Lakes are connected by a very narrow and shallow channel with just enough room for one kayak to pass by another kayak. In the heat of the summer when water levels drop, a kayak might even scrape the muddy bottom if it gets too close to the edge of the channel. According to the Michigan DNR, East Graham lake is 11 acres in size and West Graham is 22 acres, but with their coves and heavily vegetated shorelines and adjacent wetlands the lake complex appears larger. One thing cannot be disputed: it’s a very peaceful place in the dawn’s early light. Better yet, solitude greets earlier risers and the lakes do not allow power boats, or jet skis of any kind.

I offloaded my kayak onto the gravel surfaced ramp on the west end of East Graham Lake and then parked in the small adjacent parking lot just in time to watch a doe and her fawn melt back into the woodlands. And then I was alone – but not for long. 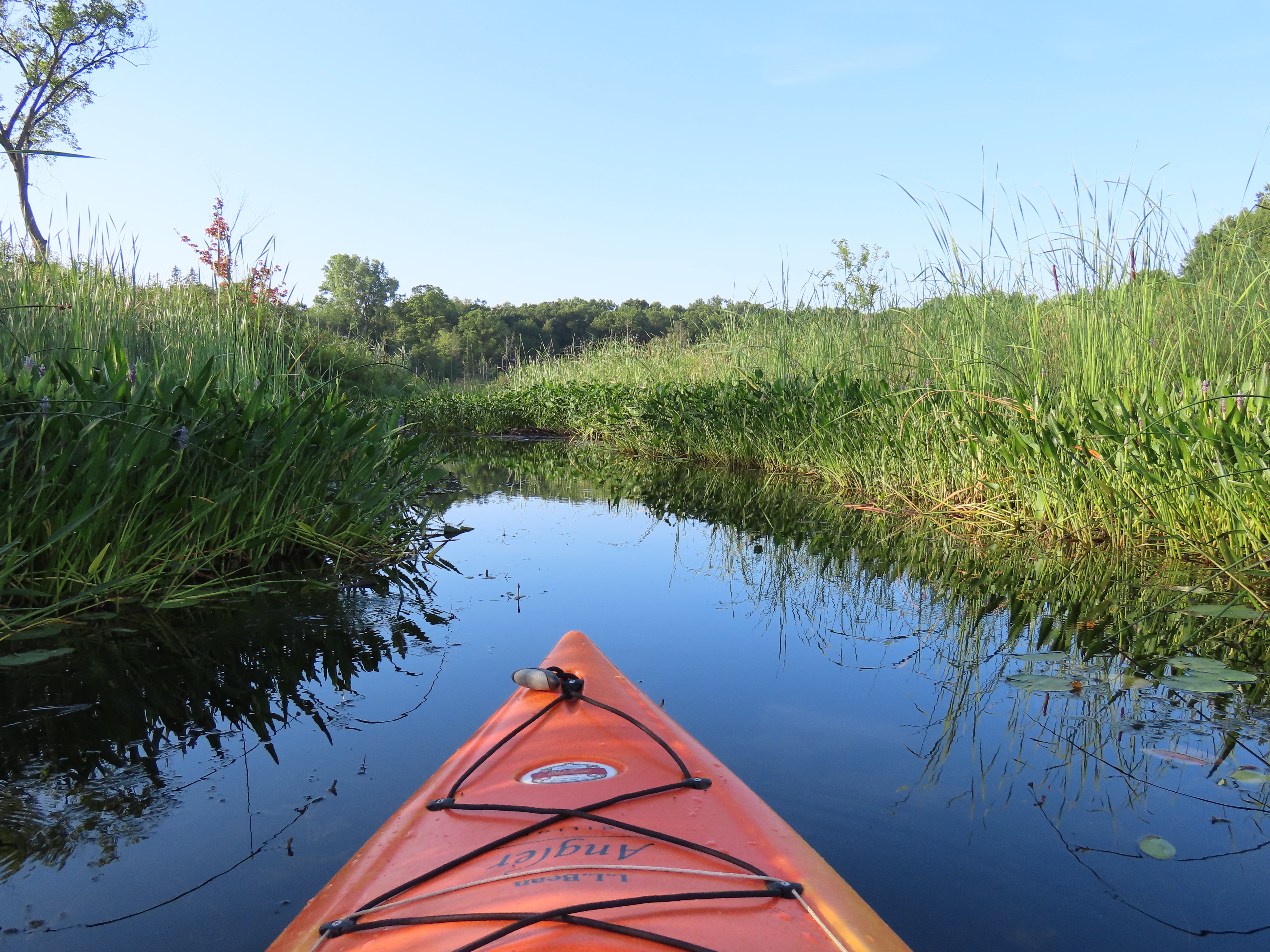 I initially paddled towards the small channel that connects the two lakes and was welcomed by hundreds of Bank Swallows that were perched on adjacent trees. At the time, I mistook the large flock as Tree Swallows since they were perched in trees, an acknowledgment that I am not an avid birder. After sharing a few images to Facebook after my adventure, the error was noted by my friend Logan Clark, an avid birder in the wildlife division of Sleeping Bear Dunes National Lakeshore. His comments saved me the embarrassment of published misidentification and inspired me to go to the Cornell Lab of Ornithology website to bring my Bank Swallow ID knowledge up to speed.

Tree Swallows and Bank Swallows are both masters of flight as they deftly pursue and intercept flying insects near the surface of shallow, weedy lakes. I watched the Bank Swallows for about 15 minutes and it was obvious they would not be going hungry. Cornell’s website also made note of the fact of the coloration difference between the two and emphasized that Bank Swallows are “extremely social” birds, a point that seemed to be emphasized by the hundreds of Bank Swallows perched together on tree limbs, positioned almost perfectly to catch the warming rays of the early morning sun. I knew the morning paddle would be fun; I did not know it would be a continuing learning experience for me and that swallow encounter was not my only moment of failed identification. 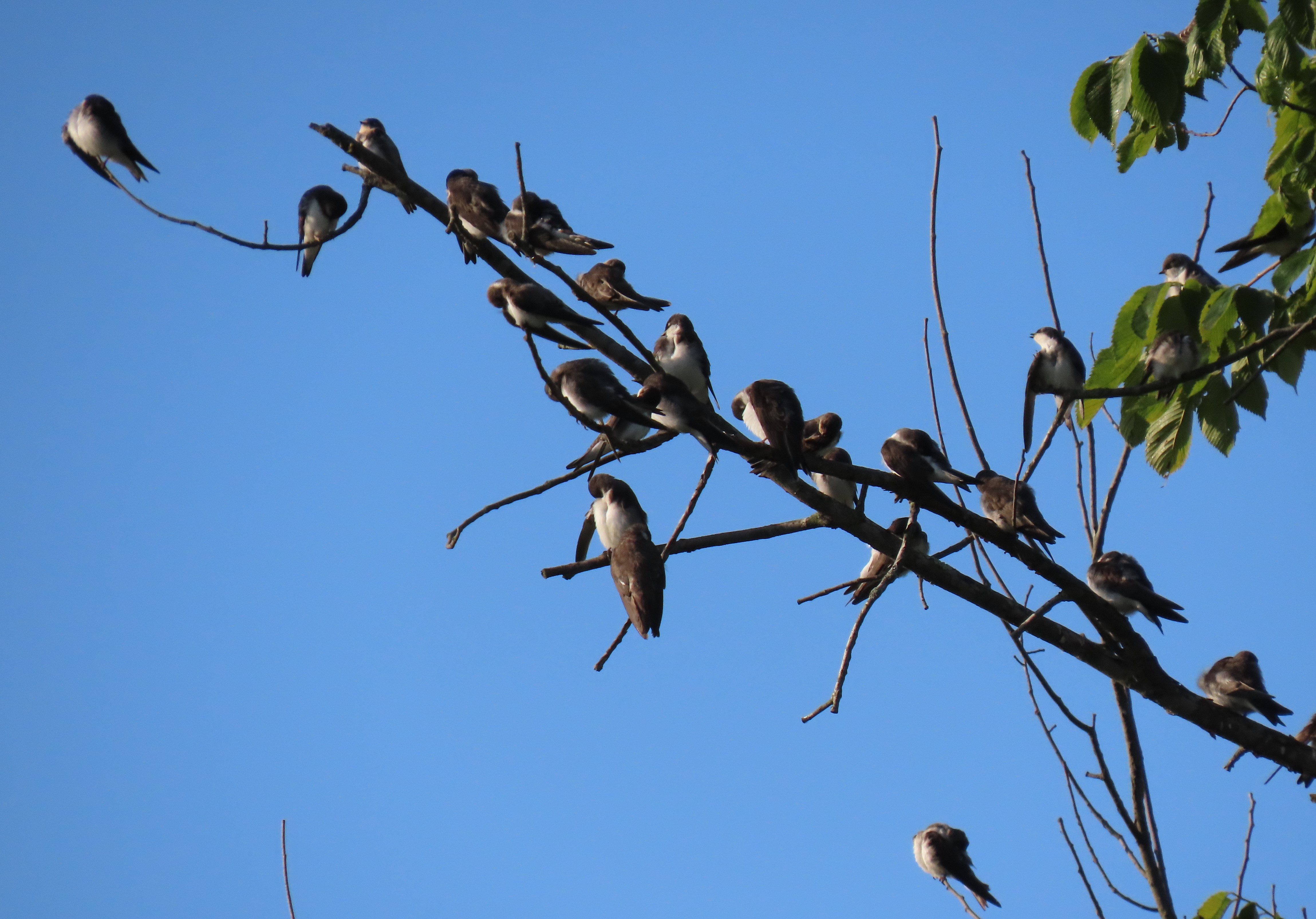 I paddled on as the sun climbed higher, just in time to capture an image of a perfectly illuminated Great Blue Heron stalking frogs or fish in the shallows. For the next few minutes I watched the heron as morning fog, set into motion by gentle puffs of wind, created near mystical images. Distractions of the most pleasant kind were everywhere and as I continued to photograph the heron, a series of splashes along the shoreline drew my attention. I was not able to see what caused it, but suspect it may have been a deer feeding on emergent vegetation in the shallows.

Moments later, the rolling, rasping cry of a pair of Sandhill Cranes in flight had me turning almost 180 degrees in the kayak and I managed one quick, slightly blurred photo of their passing. I’ve discovered through trial and error, and a camera replacement, that it’s never wise to hurry with camera operations when in a kayak. As the song of the cranes faded in the distance, I became aware of the melody of a Marsh Wren, one of the few small birds I can recognize by its distinct buzzing, rattling trill. As I tried to focus on its movement in the reeds I was distracted again, this time by a female Red-Winged Blackbird that landed on lily pads barely 50 feet from me. She captured an insect just as I captured her photo.

It dawned on me that wonders of nature were to be found everywhere I looked in these two interconnected lakes. So I continued to paddle slowly, stop often, look and listen, the same practice I follow when hiking. My next encounter of note was with what may have been a muskrat swimming in the distance, but with fog obscuring my view it could have been a beaver. I watched for a moment and it disappeared into a cove, just as I noted an eye-catching flower poking up above the surface of the water. The white flower was less than half an inch across and tiny beads of water that had formed from the morning dew dripped to the lake’s surface. It was a new species to me. A Facebook search after returning home led me to Botanist Garrie Rouse who informed me that this incredibly delicate flower is “a type of aquatic buttercup, most likely Ranunculus longirostris.” A bit of additional research revealed that it has two common names, longbeak buttercup and white water crowfoot. 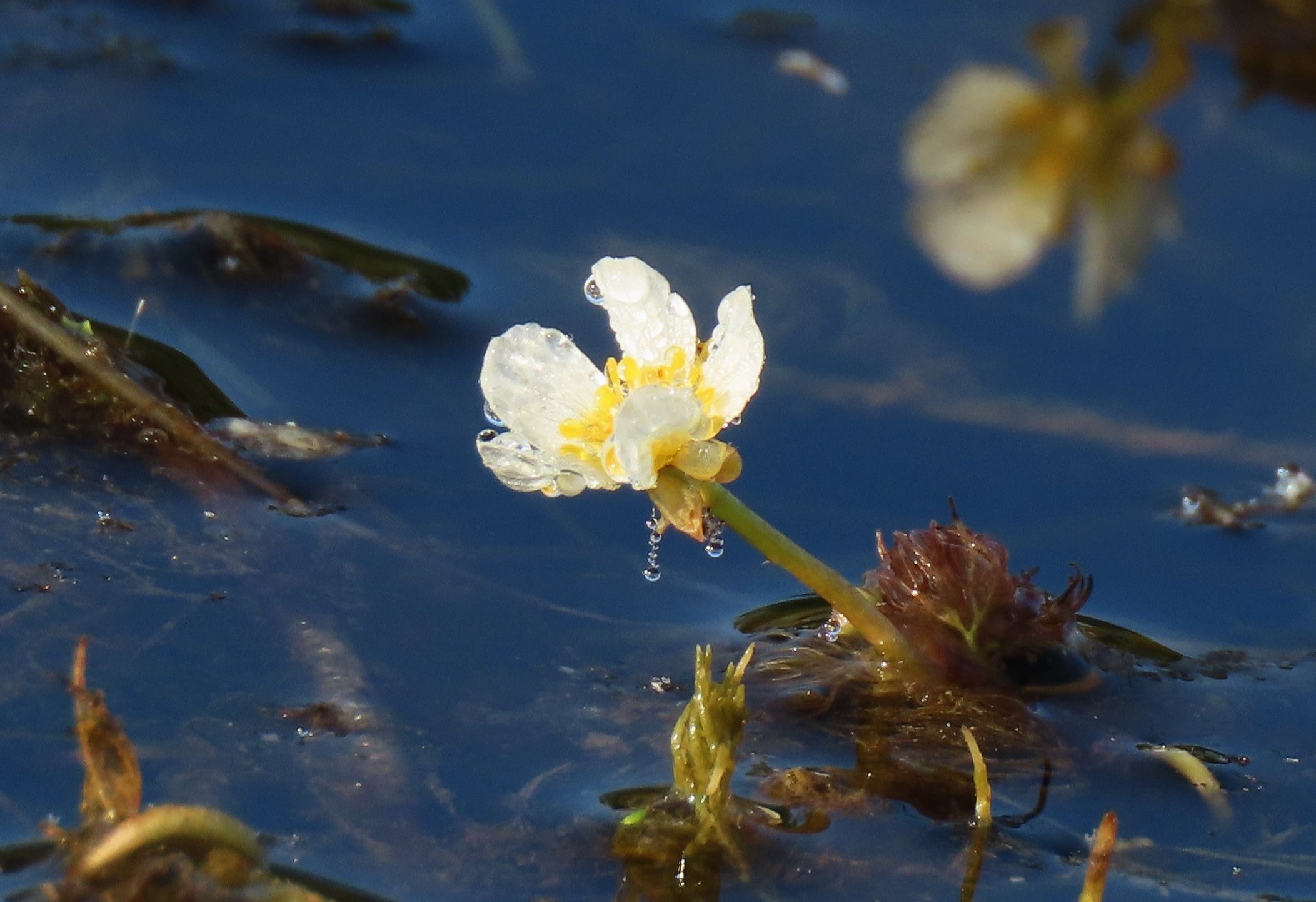 I turned to Rouse again for help in identifying a small yellow flower that also blossomed just inches above the surface of the water and discovered it’s a member of the Utricularia species with the common name of Bladderwort. He went on to explain, “They are passive, insectivores’ plants. If you were to pull one up and look at their submerged vegetation you would see little bladders scattered about that are used to trap small aquatic organisms.” His comments stirred my interest in this carnivorous plant and so I did additional research from multiple sources and discovered they capture and digest a great variety of tiny creatures, including mosquito larvae. Here’s some easy to understand information from the Kiddle Encyclopedia, a website designed for kids. It also works well for me.

“Despite their small size, the traps are extremely sophisticated. In aquatic species, prey brush against trigger hairs connected to the trapdoor. The bladder, when “set”, is under negative pressure: when the trapdoor is triggered, the prey, with the water around it, is sucked into the bladder. Once the bladder is full of water, the door closes again. The whole process takes only ten to fifteen thousandths of a second.” 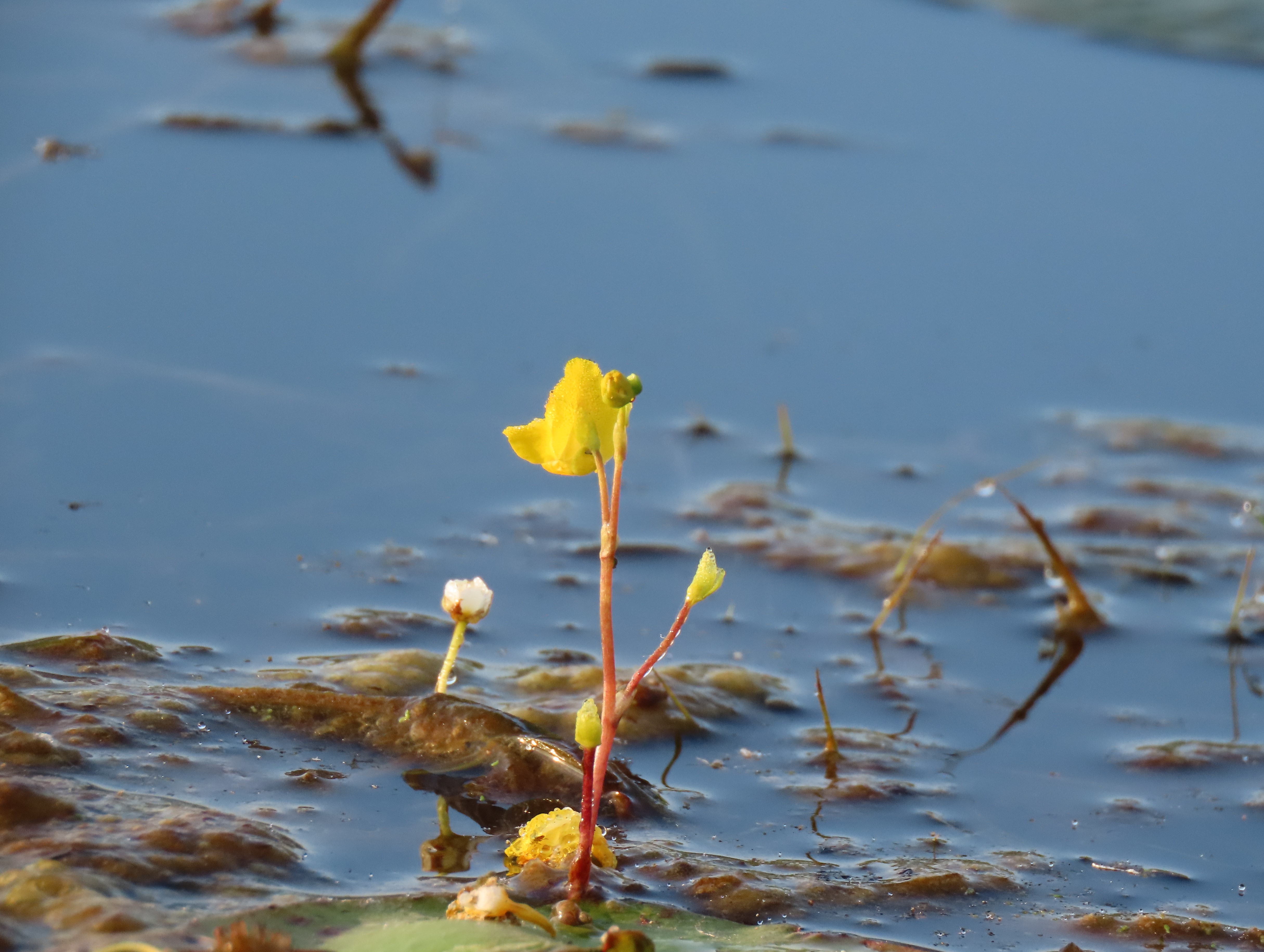 With the sun climbing higher well into the second hour of my peaceful sunrise paddle, I stopped paddling for a while to photograph spider webs draped between the stalks of pickerelweed that still glistened in morning dew. Pickerelweed is one of more common flowers that edged the connecting canal, a species that is unmistakable with its blue blossoms. As I continued my journey back through the channel back to East Graham Lake, I encountered two other kayakers heading out for a morning of fishing. We exchanged pleasantries, and they like me, were pleased it’s a lake free of noisy motors and fast-action, a reminder of what is rapidly vanishing in many parts of our county. 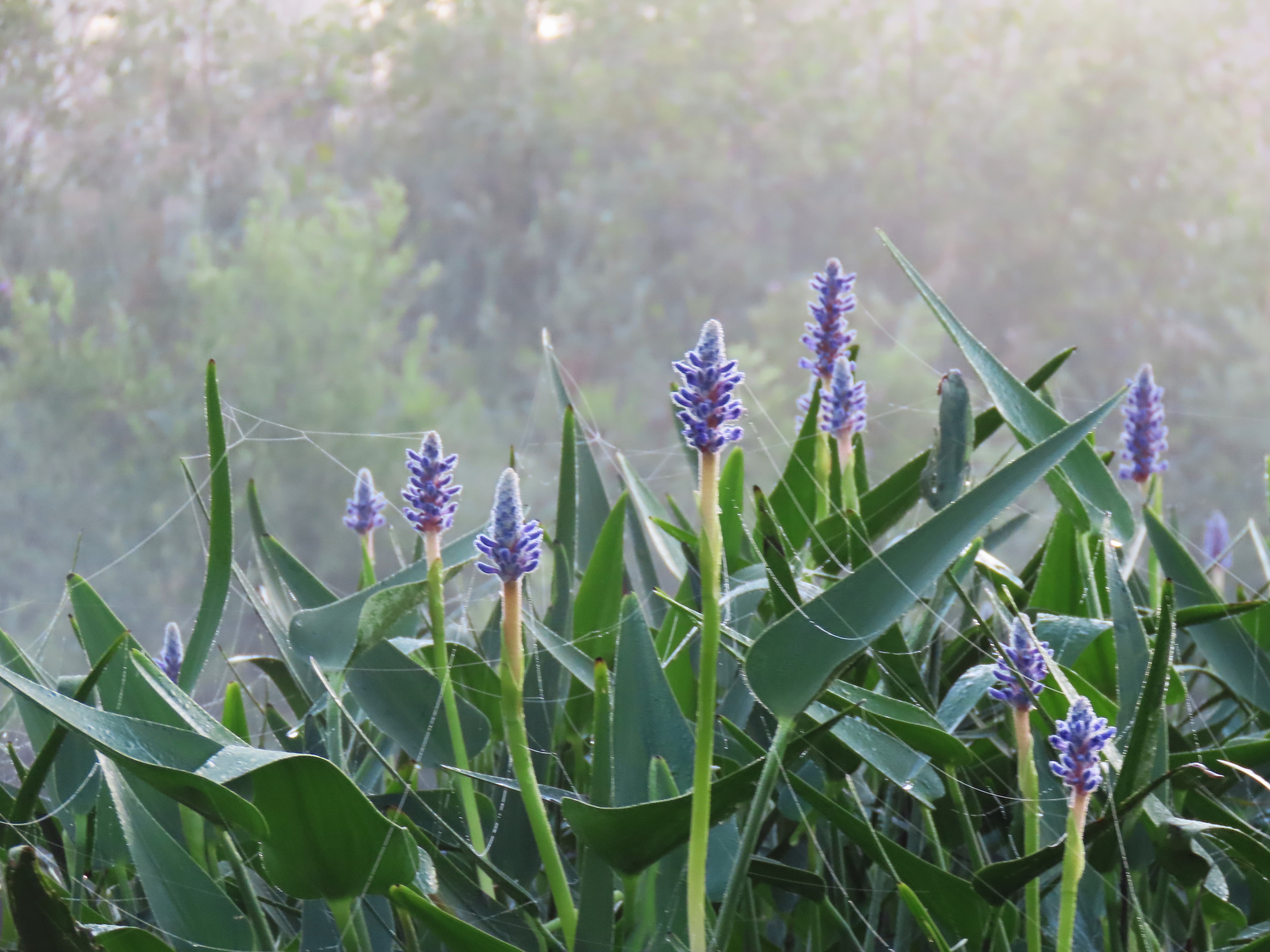 Just as the last of the morning fog dissipated, I encountered a species I know well: spatterdock, a wetland beauty that also bears the name yellow pond-lily. Its blossom was just beginning to open in the morning light and it reflected perfectly in the clear waters, a reminder to me that East and West Graham Lakes should always remain places where nature’s way sets the tone on the wilder side of Oakland County. The silence of the morning was interrupted just as I reached the shore by the call of a catbird hidden in shrubs and the sharp cry of a Red-tailed hawk. And that’s the way it should be to wrap up a sunrise paddle – the music of nature and the silence of man. 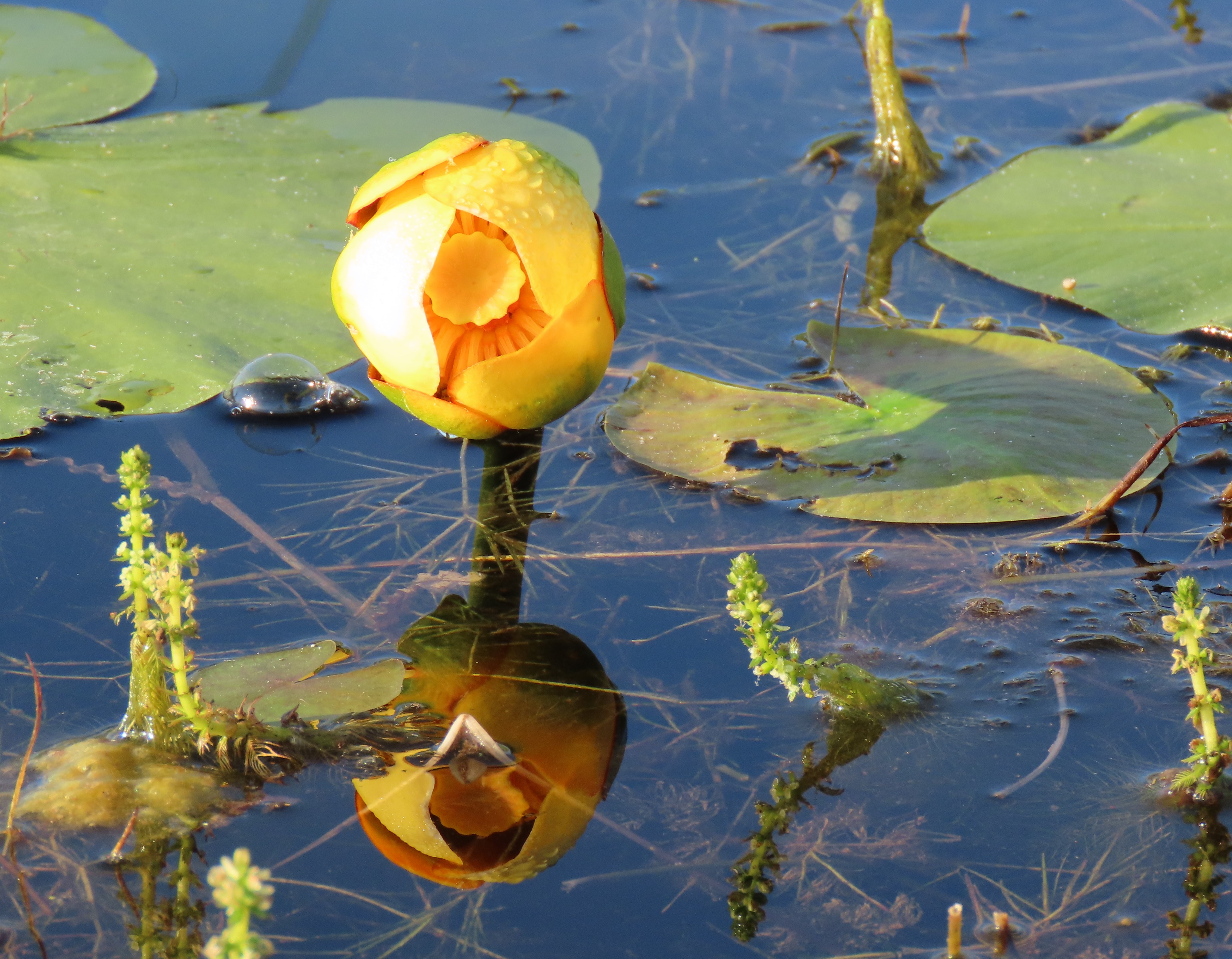 2 thoughts on “A Sunrise Paddle on the Wilder Side”