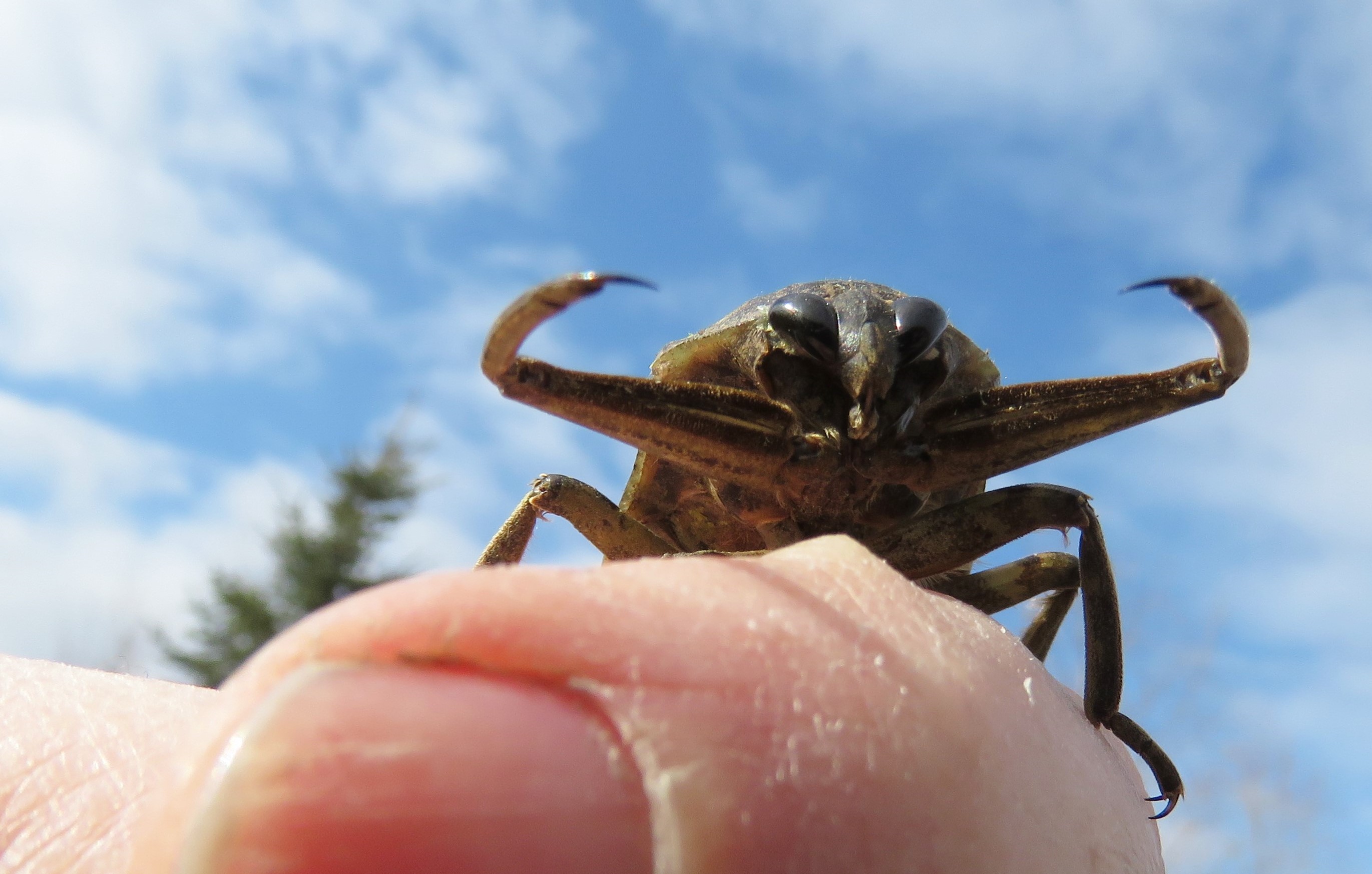 This mystery bug is not reluctant to take on prey many times its size. It’s a fierce predator with a pair of powerful forelegs that are tipped with hook-shaped claws to grasp and hold prey. And then the real nightmare begins, for this voracious predator of Oakland County with a seemingly endless appetite is equipped with a rostrum, a beak-like projection that is used to pierce flesh and then inject a potent enzyme that poisons and begins to digest the victim while it’s still alive. Once the enzyme does its work and liquefies the internal parts of the sometimes still squirming victim, the rostrum is used to suck up the slurpee-like partially digested soupy mix of flesh. That’s not science fiction; that is science and the ambush hunting behavior of the Giant Water Bug. And yes, they do live in Oakland County. 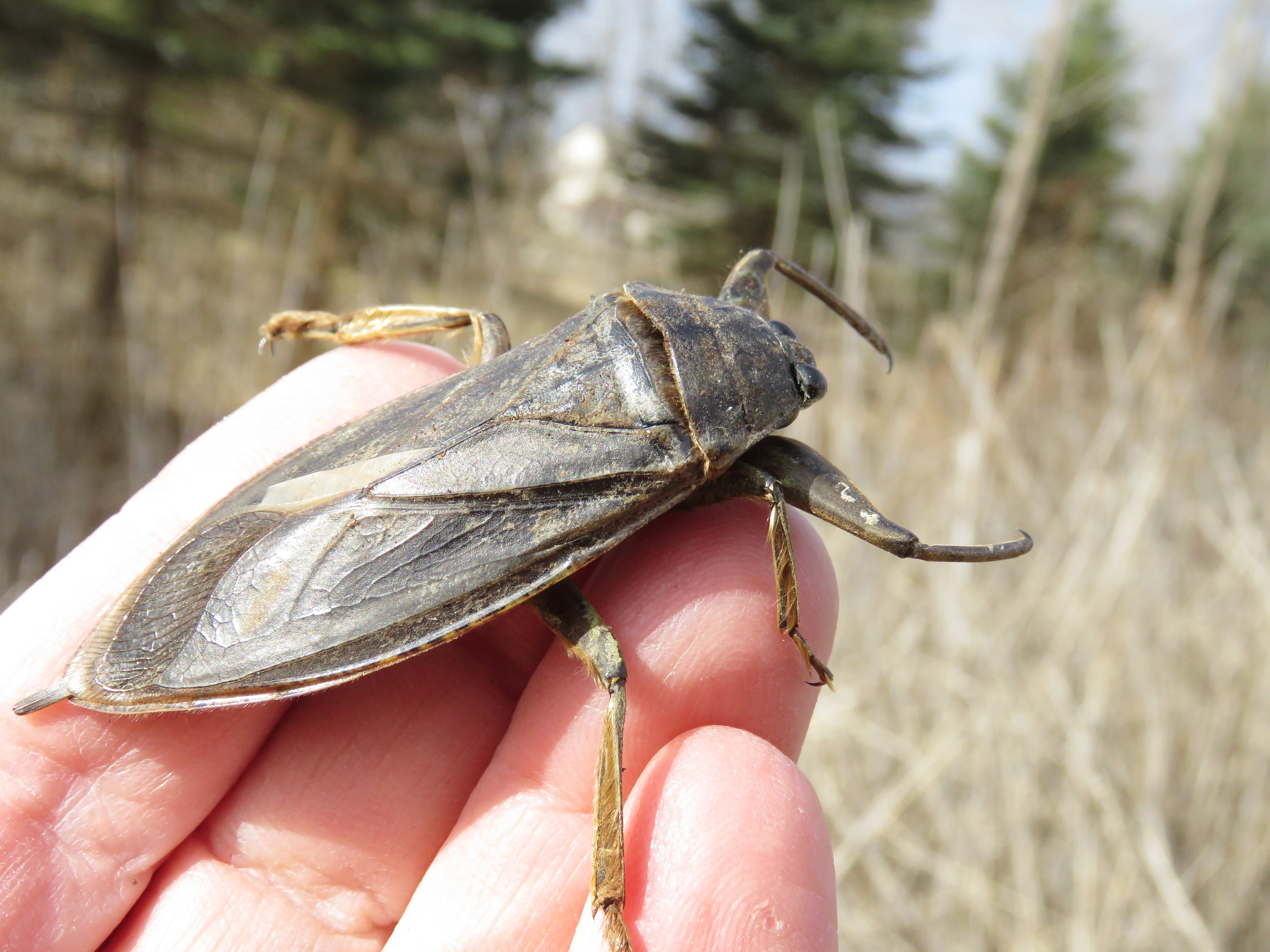 Here’s my story of “evasion and escape” with hats off to one of the most amazing bugs on our planet, the Giant Water Bug, a fine-tuned oddity of nature that gets a ten on the one through ten scale of weirdness. It gets the same score of ten on its ability to not only survive, but thrive rather secretly in a human-dominated county. These close-up water bug photos were all captured back in March during my close encounter after a firefighter friend called me in the early morning about a “very weird” and “scary looking” bug that was found on the concrete pad of a fire station in northernmost Oakland County the night before. “We have it confined in an empty coffee tin and it’s absolutely H-U-G-E and it looks like a deformed cockroach.” I responded to the scene to investigate, for that’s what a sometimes foolish nature embracing writer-naturalist does, even when the mystery beast is described as a deformed cockroach. 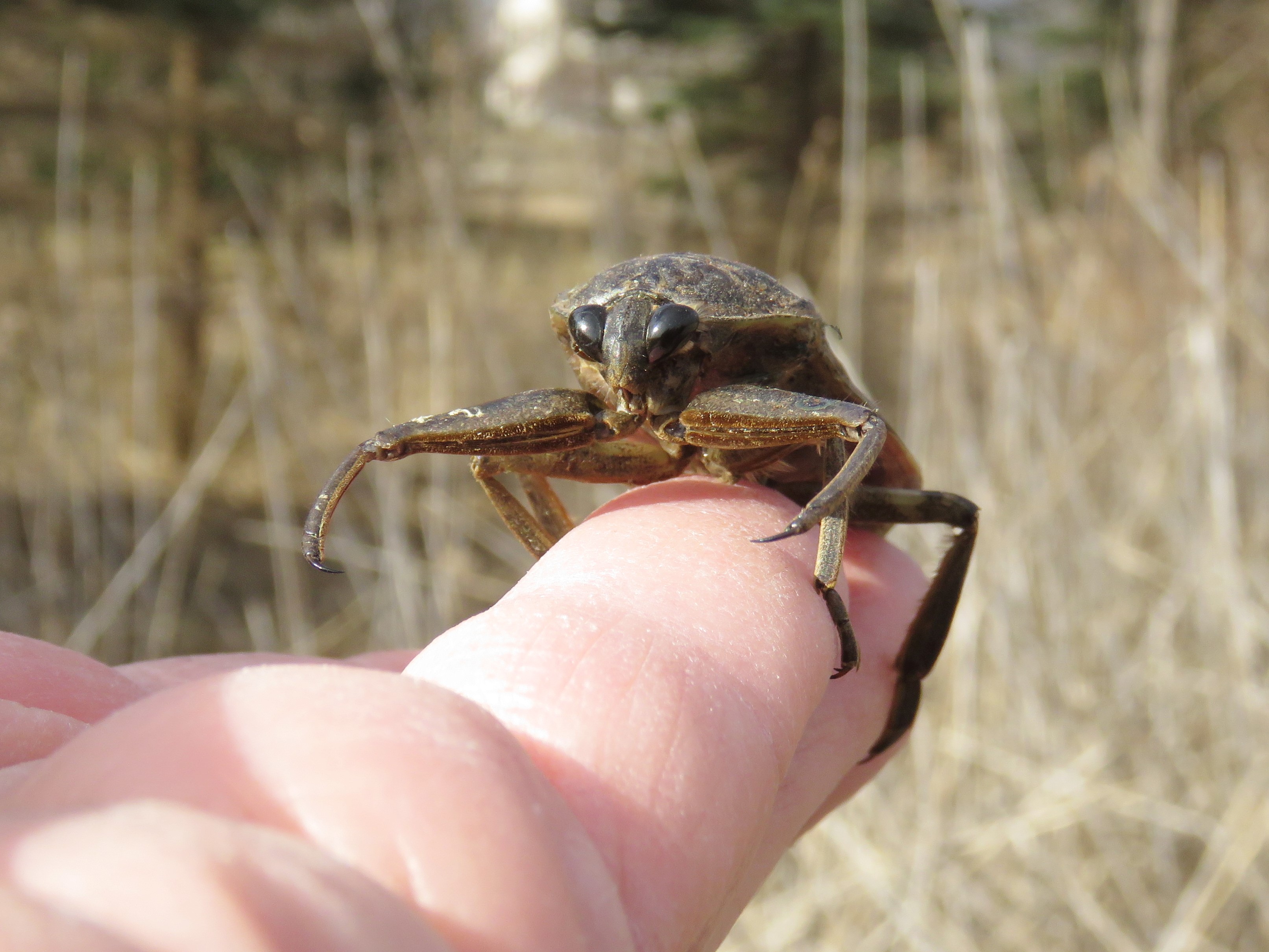 A three-inch long giant water bug greeted me, crawling sluggishly in circles at the bottom of the coffee can. Giant Water Bugs are members of the Order Hemiptera, insects that are true bugs. They are the largest true bug in Michigan and, for that matter, anywhere in North America. They are actually rather common, but rarely seen, for our worlds don’t blend sweetly together and they are sometimes mistaken as very big cockroaches. Their extremely large forearms are powerful pinchers that make some think of praying mantises on steroids. The giant water bug has a rather flat, unexciting appearing, oval-shaped body that is generally brown. As mentioned earlier, it also carries potent weaponry. A close hand held look (something I do NOT advise doing) will reveal a short, pointed beak (the rostrum) on the underside of the head, and folded wings that overlap at the bottom end of the abdomen, forming an “X” like pattern. 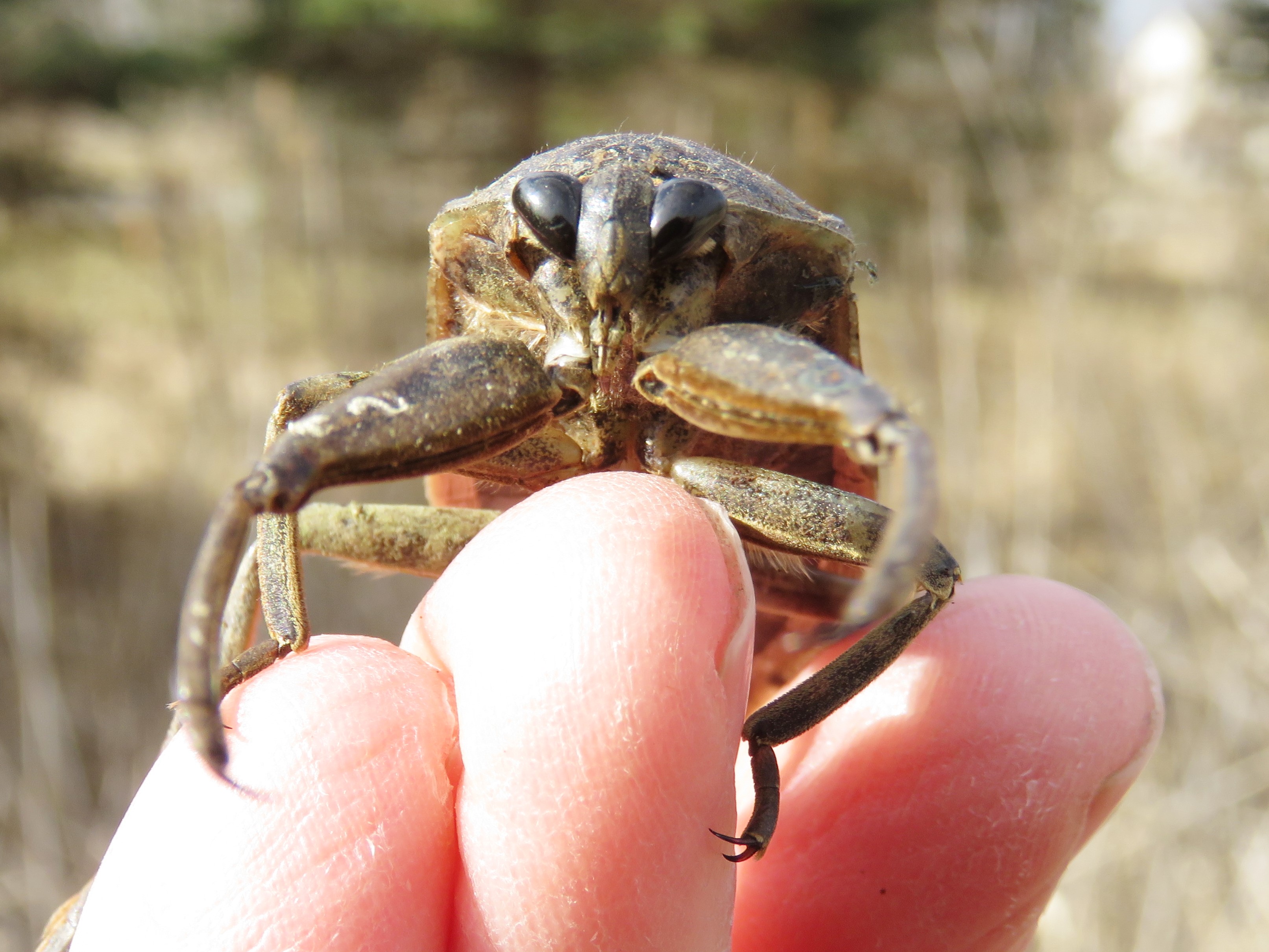 Water bugs also fly, usually at night, giving it one of its two common nicknames, “electric light bug.” Because they are attracted to light they are sometimes encountered in illuminated parking lots and under porch lights: hence the nickname, “electric light bug.” Their ability to fly is a huge asset when searching for new habitat. “Toe-biter” is their other colloquial name since their prime habitats are shallow weedy water, where most of their hunting occurs. They can inflict a painful “bite” on a barefooted human or a human that is foolish enough to handle one in warm weather. 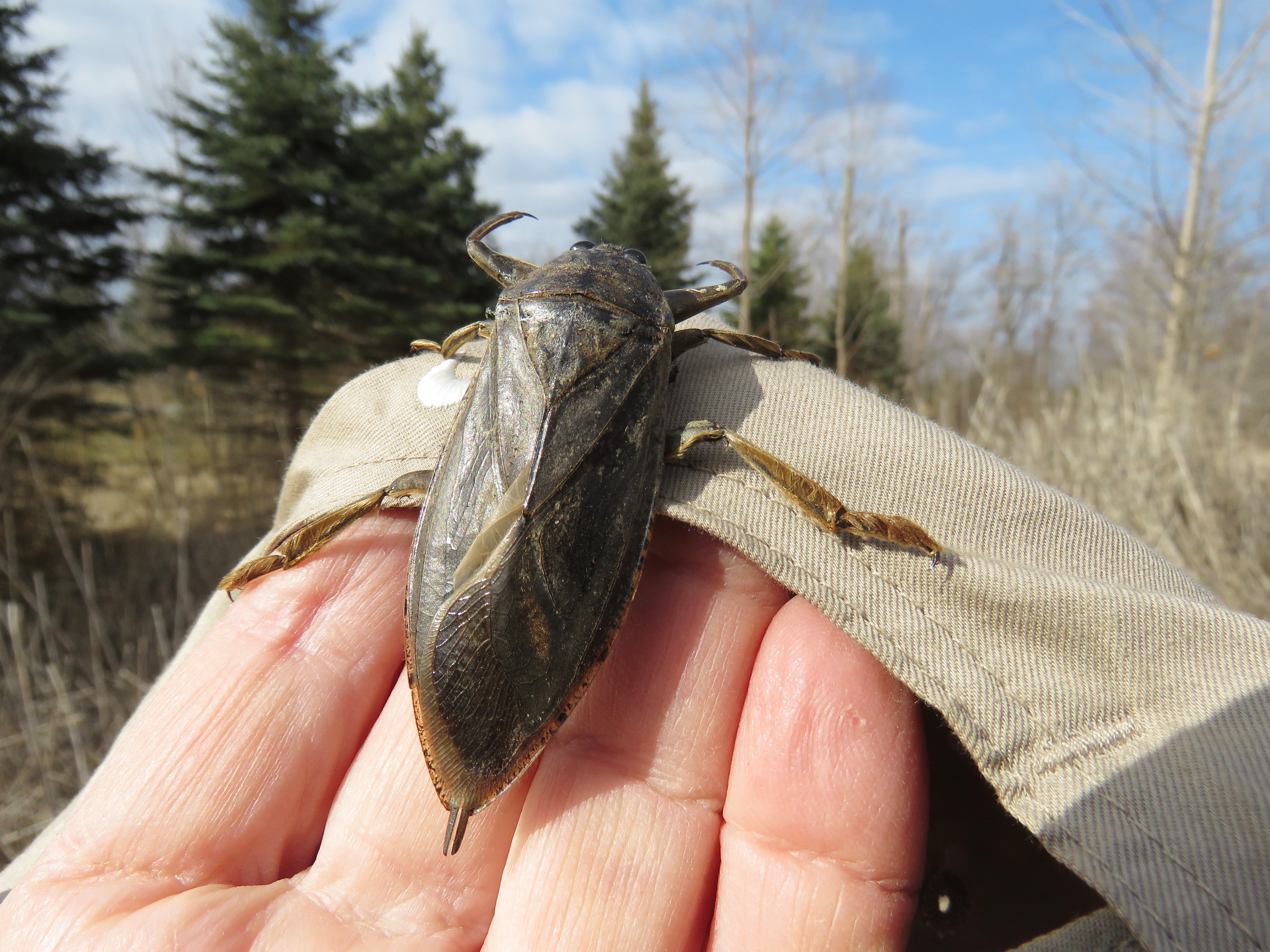 I wanted to photograph the captive up close without becoming a patient. I had a plan and it’s important to note that the temperature outside was still hovering in the low forties. I would not try this on hot sunny day like today! Bugs are sluggish when temperatures are low. And so, at first with gloves on, I gently picked it up and set it on my cap which was at that time not on my head. It crawled slowly about. I assumed it was probably too cold to fly off or stab its rostrum into my flesh and so off came my gloves and with a bit of coaxing it slowly walked onto my hand. I’m not sure why it seemed so comfortable exploring my hand, but perhaps a human was something beyond its ability to comprehend and my hand was warm. Or perhaps this ambush hunter’s secret plan was to take me by surprise and suddenly jab me and try to dissolve my innards. That thought crossed my mind, for they will take on and successfully subdue creatures many times their size including snakes and frogs. Most of their prey however are minnows, tadpoles, salamanders and aquatic insects. 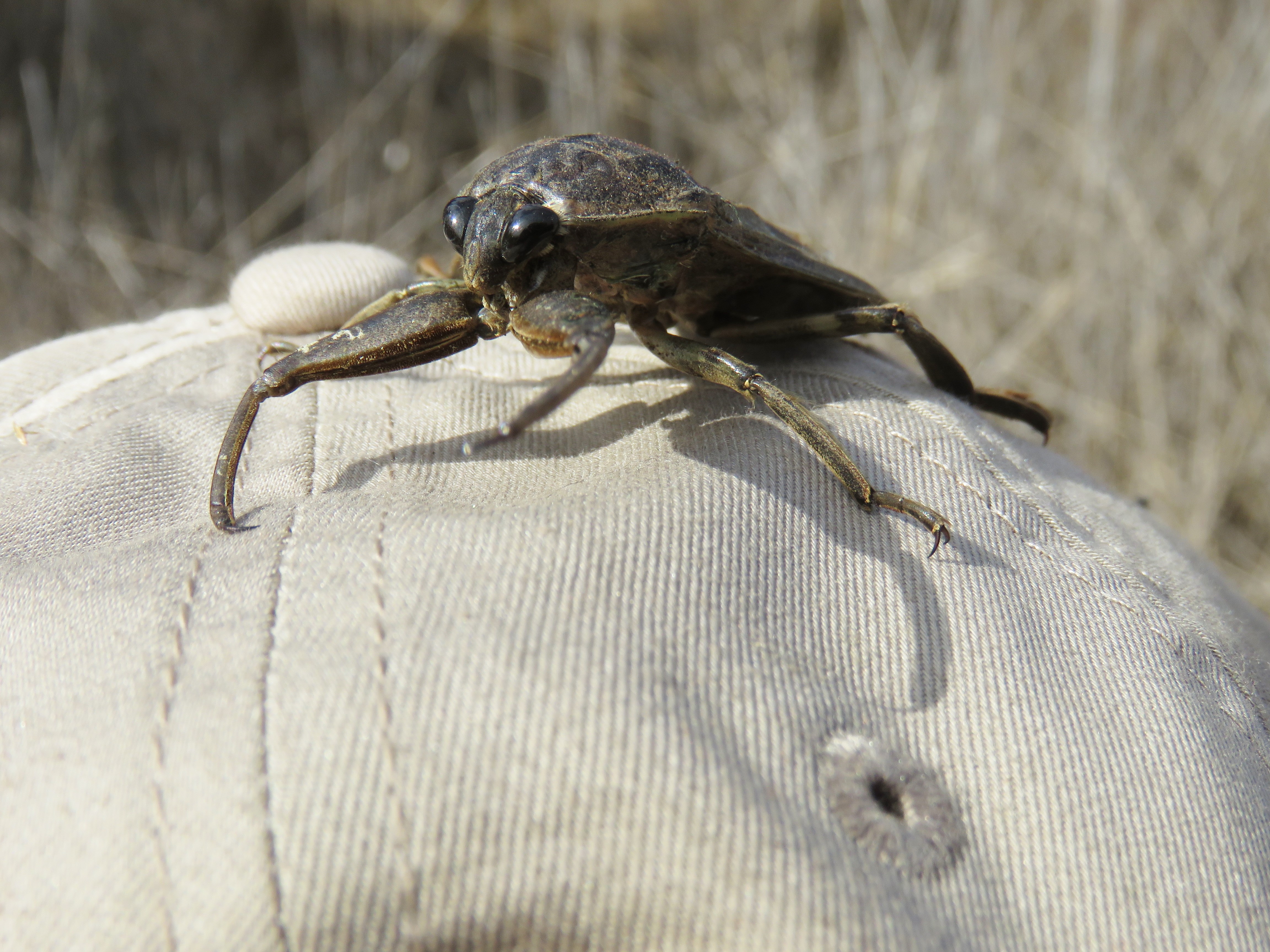 For the next ten minutes, it was a photo capturing bonanza as the water bug slowly warmed up and explored the back side of my hand and then my fingers when I went palm side up. All at once, I noted it was moving more quickly, becoming more alert and it then began to squeeze my finger between its legs, just as its head was beginning to bob up and down. I could not decide if it was thinking “Dinner time!,” or perhaps it was just a signal that its respiratory rate was increasing. I’ve never been bitten by one, but I took its increased activity as a sign it might be time for us to part as friends. Just as I prepared to shake it off my hand, it took flight on its own and in seconds reached a nearby tree.

More than two months have passed since that exciting encounter, but on warm evenings of June, the Giant Water Bugs in our midst are more active and encounters are more likely. Look for them. They are amazing creatures found all across Oakland County. Here are some additional facts about these fascinating creatures.

The female lays eggs on emergent vegetation just above the water level and then leaves her future babies forever. Daddy bug sticks around and guards them until they hatch and will keep the eggs moist during hot dry spells.

The Giant Water Bug is an air-breathing insect, but they do not have lungs like you and I. They breathe through tiny pores known as spiracles spread over their bodies. Snorkel like breathing tubes are also located at the hind end of the abdomen. When the water bug is under water, as it usually is, it remains motionless in the shallows waiting to ambush a meal, with the snorkel reaching the surface. Bubbles of surface air are trapped under its wings and from there they enter the spiracles, a wonder of nature that makes the giant water bug a master hunter with its own scuba gear.

Oakland County’s lakes are shark free, but our marshes are home to this “toe-biting” lie-in-wait predator – food for thought for those that wade barefoot. Perhaps a giant water bug is waiting for you in those murky waters right now – think of the music from Jaws. And if a mental image is not enough to quicken your mind, click here to watch an amazing four minute video. Although the narrator is speaking Japanese (water bugs are found around the world), the music and action may just entice you to leave your sneakers on when walking in shallow waters on the wilder side of Oakland County.

21 thoughts on “The Giant Water Bug of Oakland County”