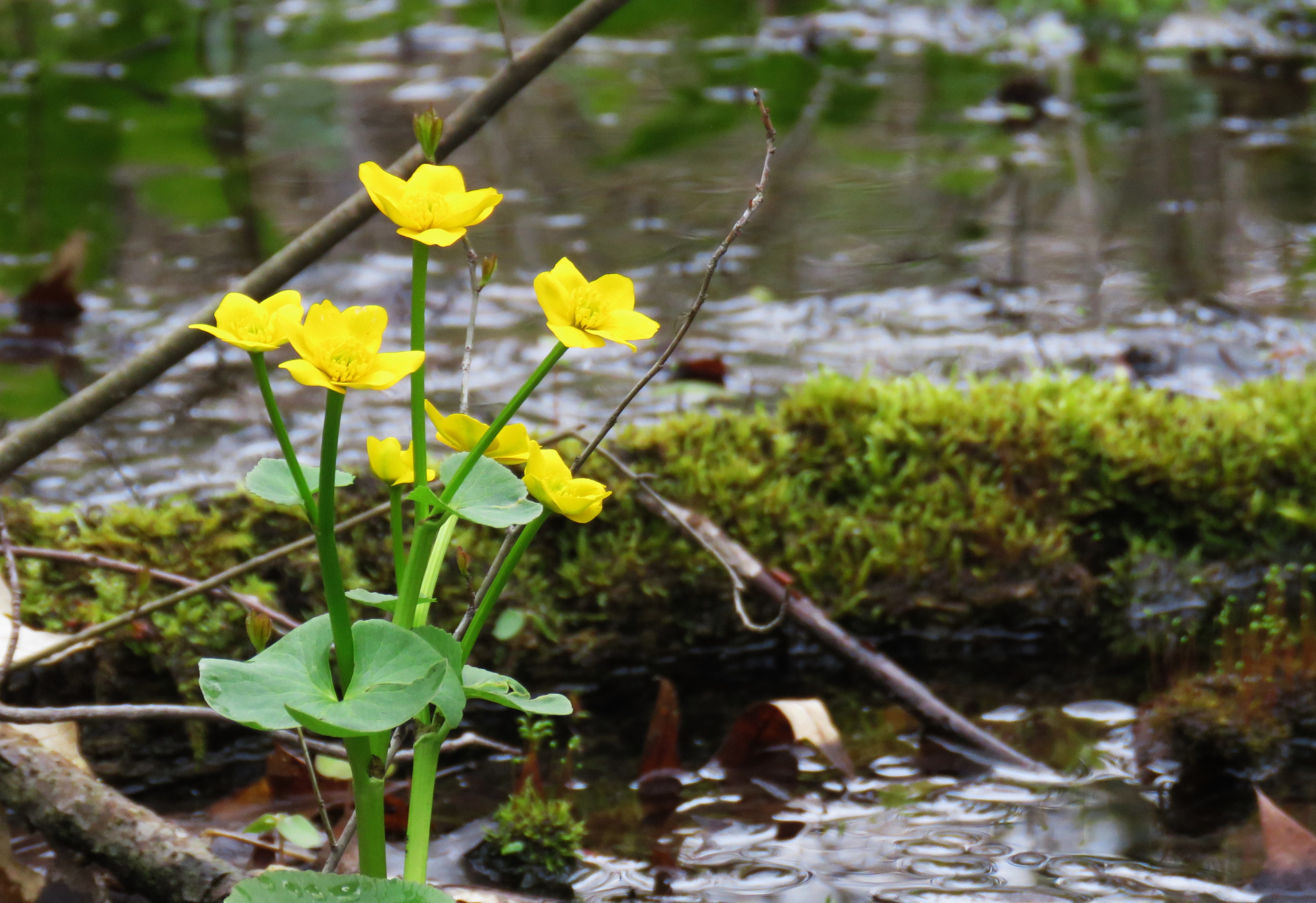 Just the very word swamp can conjure up images of danger lurking behind every tree, venomous snakes slithering over logs, gators hungry for human flesh, monstrously large spider webs slapping against faces and squadrons of blood-thirsty mosquitos almost making the air too thick to breathe. I prefer the words of Henry David Thoreau, “I enter the swamp as a sacred place.” 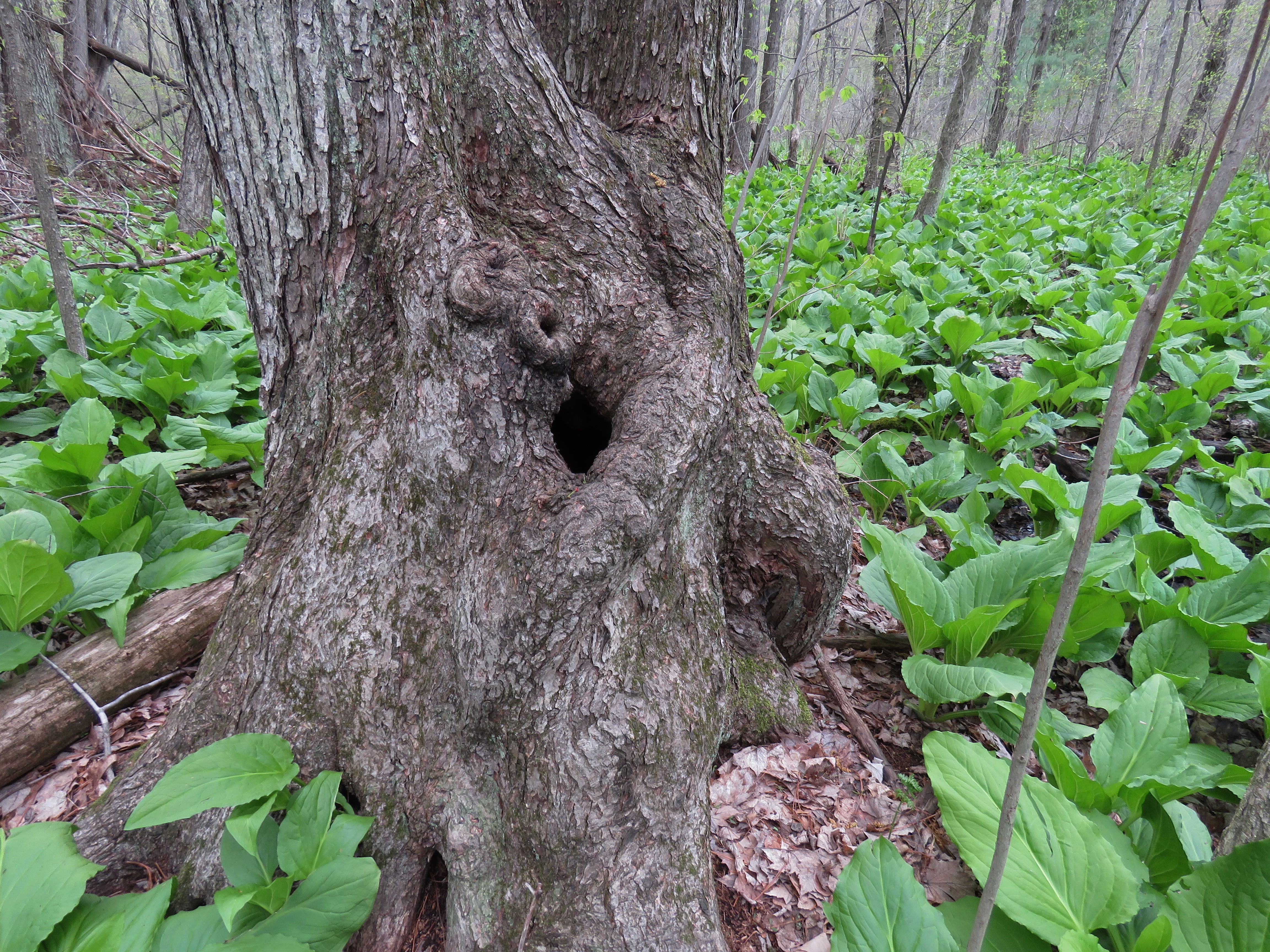 Oakland County has many swamps. We can thank the land-sculpting skills of the retreated glaciers for that gift. Swamps remain sacred to me and lure me to their edge, and that’s where another quote comes to mind, a quote from Charles Darwin reprinted in the Book of the Swamp and Bog by John Eastman, “Nothing exists for itself alone, but only in relation to other forms of life.” 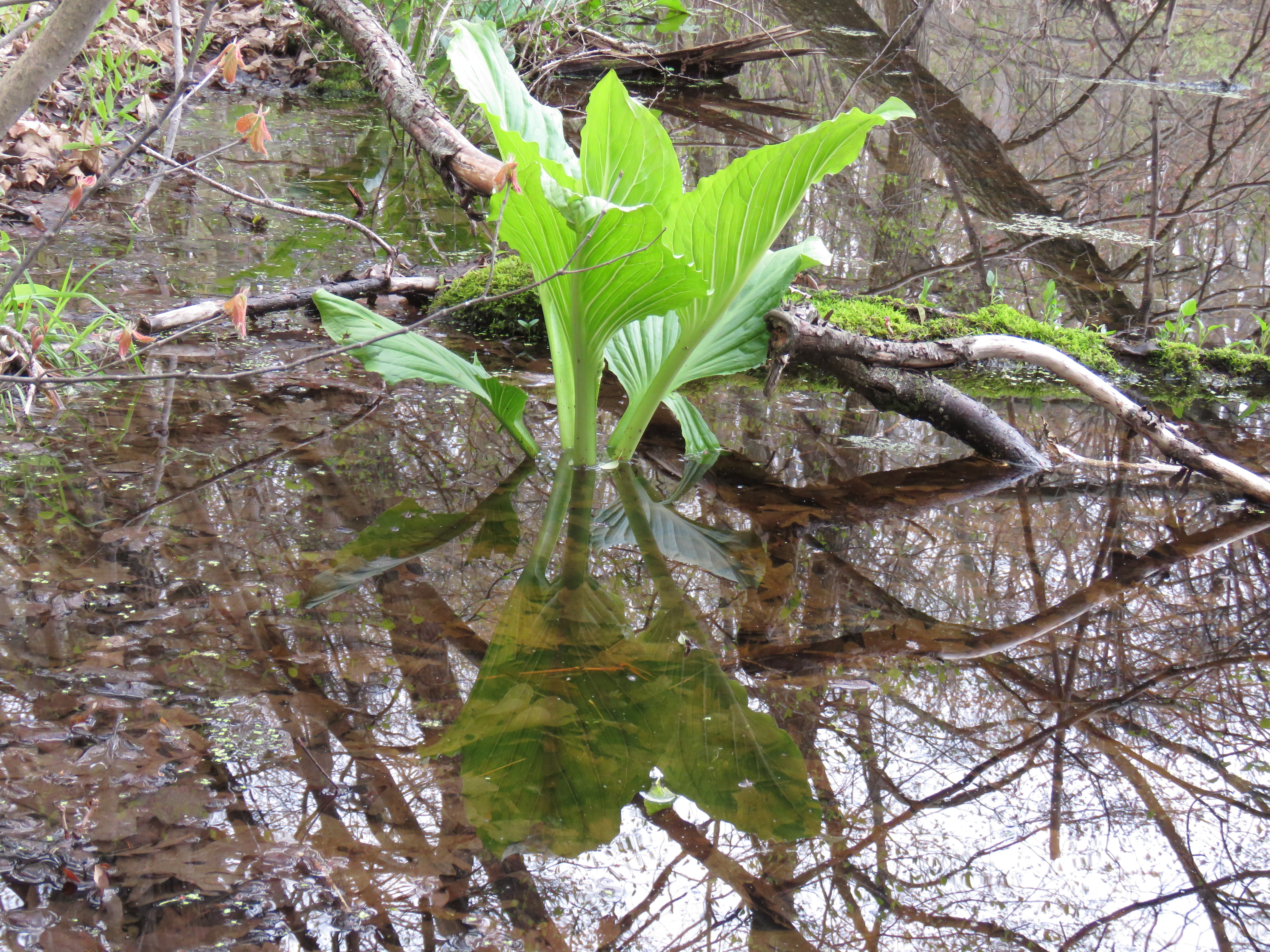 I think I unknowingly accepted that 14 word sentence from Darwin long ago, way before I could read or write, for I grew up at the edge of woodland swamp and still suffer from incurable “swampatitis,” an ailment that draws me to swamps of every size and shape. One of the symptoms is an uncontrollable urge to hike around swamps. Perhaps that’s because when I was a bare-footed four or five-year-old in rural Connecticut, I would play at the edge of our swamp, a magical place from which I was not forbidden. Down through the meadow I would run with our big black lab to be greeted by strange sounds and beautiful sights. That’s where I discovered my first swamp plant, skunk cabbage, the plant with the really huge green leaves that “smelled funny” when crushed. My Dad told me all about it and the cool things that plant did, like melt snow by its own internal heat when it first emerged through snow at the end of winter. I doubt I understood much of what he said, but excitement is contagious and I was never told to stay away from the swamp, but just not to go walking into it. The world of the swamp was far more exciting to me than the black and white TV with rabbit ears, tucked away in dark room.

Any type of swamp ecosystem is an amazing place to explore. One of my very favorite great swamps is now a national park, Congaree National Park in South Carolina. I’ve wandered there under champion size bald cypress trees and encountered cottonmouths and invasive wild boars. I feel like a kid in a candy store when there, but situational awareness in that swamp is a must. There are many definitions of, and variations as to the kinds of swamps that exist. National Geographic explains swamps in layman’s terms this way: A swamp is an area of land permanently saturated, or filled, with water. 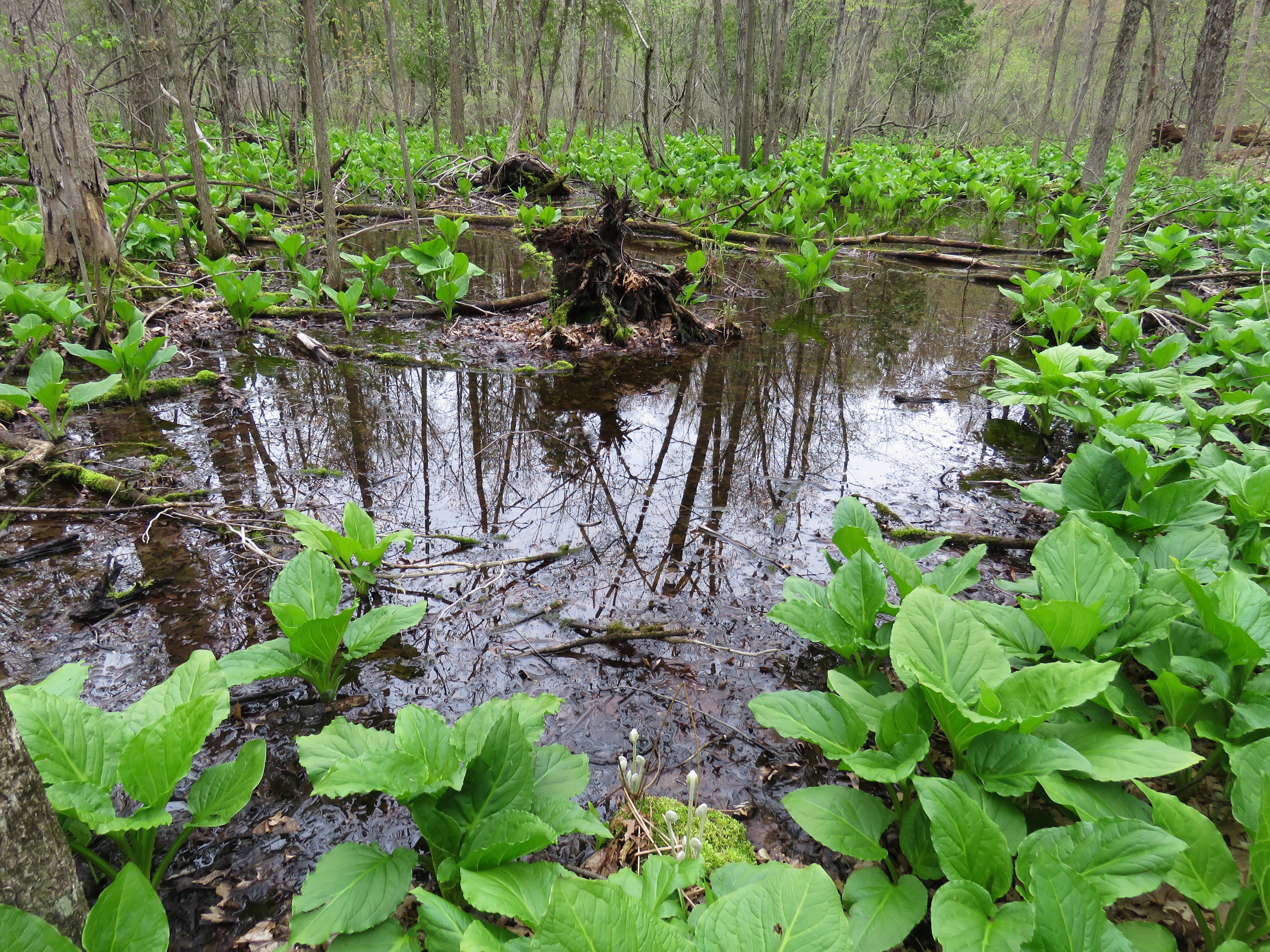 In Oakland County, swamps are essentially forested wetlands that have water in them for at least part of the year, and unlike cattail marshes, they also have trees, shrubs and other vegetation that grow in the shallow water. And sometimes our reclusive “swamp rattler,” the Eastern Massasauga Rattlesnake, is found near the swamp’s edge, a good place for it to slither about on frogs hunts. Oakland County swamps, and the forested hillsides that cradle some of them, are amazing places with incredible diversity of flora and fauna. I call one of my favorites, “The Great Skunk Cabbage Swamp.” It’s tucked away in in the southeast unit of a section of the Bald Mountain State Recreation Area and is well within sound range of the DNR’s shooting range. There are numerous entrance points and trail heads within that State Recreation Area, but I often enter from near the southeast corner of the Lake Orion High School parking lot off of Scripps Road in Orion Township. That trail takes me over Spring Creek where there are multiple hilly routes that will guide me towards trail marker #8, adjacent to one corner of that swamp. 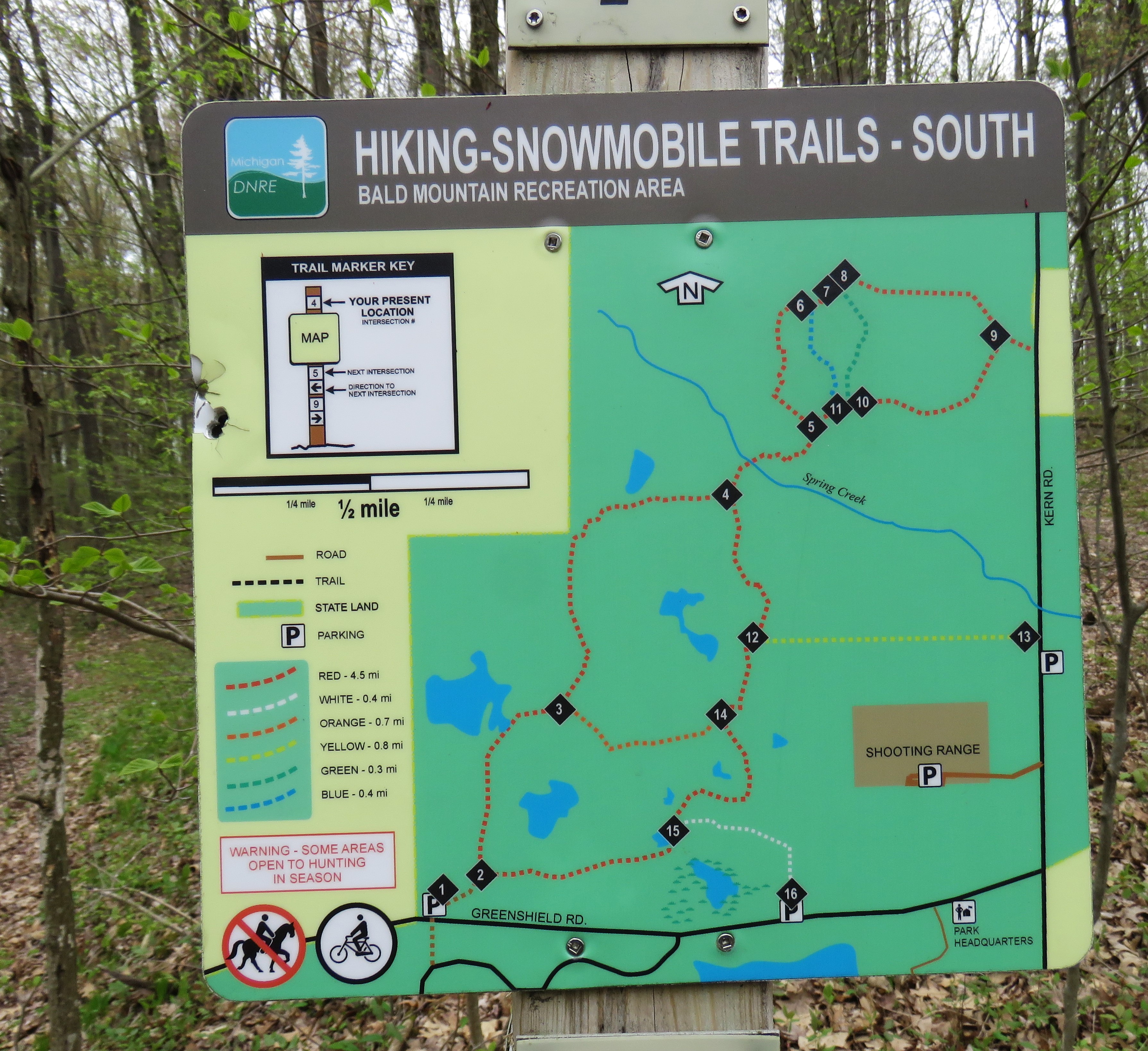 My last visit to that site was almost two weeks ago when the trillium surrounding the swamp were approaching peak bloom and a virtual sea of skunk cabbage leaves covered several acres of saturated soil. On that day, my greeting party was the unmistakable drumming of Pileated Woodpeckers and the honking of Canada Geese that live within the swamp habitat. As soon as I reached the edge of the swamp, a pair of Wood Ducks exploded into flight. I wondered which of the many trees that had hollows held their hidden tree nest. I followed the trails around part of the “great swamp” making note of Jack-in-the-pulpit on the adjacent hillsides. By the time you read these words, the last of the hepatic and most of the trillium will have ceased blooming, but they will be followed by wild geranium which add a different shade of purple to the woodlands, and the leaves of skunk cabbage will be even taller and thicker, hiding a secret world beneath them.

It’s wise to stay on terra firma if you hike off trail to explore the far side of the swamp’s edge. One step too close and boot-sucking muck will take hold of your foot. I was excited to see opossum tracks at the edge of the swamp that led directly to a ground level cavity in a tree. Both yellow birch trees and northern white cedar grew within the boundaries of the swamp, species that thrive in that habitat. The yellow birch is easy to spot from afar, with its classic curly bark.

Evidence of what created the swamps was commonplace, at least for those that can read the landscape. Glacial erratics, large boulders deposited by the retreating glaciers, were commonplace, many covered with mosses. Windthrows, the uprooted roots and connected soil masses of trees felled by strong winds were commonplace and a critical part of that habitat. I was lucky to spot both a red-backed and blue spotted salamander near the base of one as they crawled about through moist decaying leaves. And not far from them was a small wood frog. I suspect all three were out hunting small insects or worms.

When I knelt to watch the tiny creatures, my eyes were drawn to the uncurling fronds of freshly emerging ferns and just behind them, the yellow blossoms of marsh marigold. I sat on the edge of that hillside just above the swamp’s edge for the next 15 minutes and did absolutely nothing except listen to the music of nature, a reminder to me that mysterious and sometimes complex wild places thrive in our midst. Go for a walk on the wilder side of Oakland County and seek them. They are the sacred places of nature’s way.