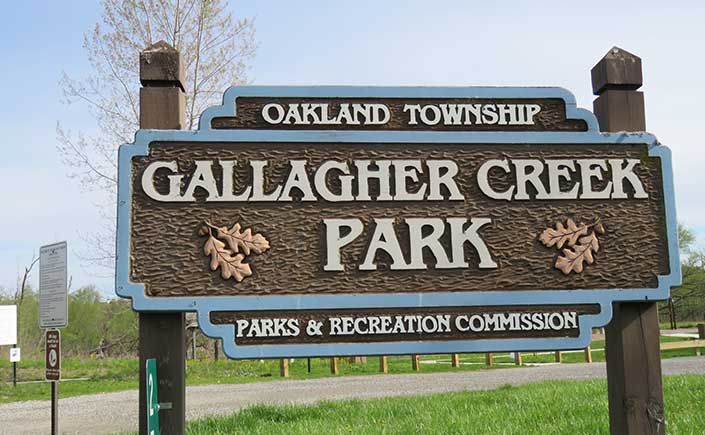 A skittish doe and her tiny fawn, a pair of killdeer, yellow-throated warblers, over a dozen robins, various vireos I could not identify, a northern oriole, a “chilly-appearing’” leopard frog, territory proclaiming red-winged blackbirds, a whole lot of crayfish and at least two human families could not wait for the upcoming grand opening of 15-acre Gallagher Creek Park next Thursday afternoon. Neither could I. And so last Saturday morning, under a clear blue sky that rapidly turned gray, I set out to explore this small creek-side, wetland embracing park that is located on the north side of Silverbell Road immediately east of Adams Road within one of the more densely populated areas of Oakland Township.

This park is significantly different from other small roadside parks scattered across Oakland County and is striving to balance the protection of unique and sensitive natural areas with the creation of recreational facilities geared towards young accompanied children. I think that concept is great, for it gives children who come to the parks to play on the play structures early exposure to nature through passive observation as they play, or walk about the mowed trails. 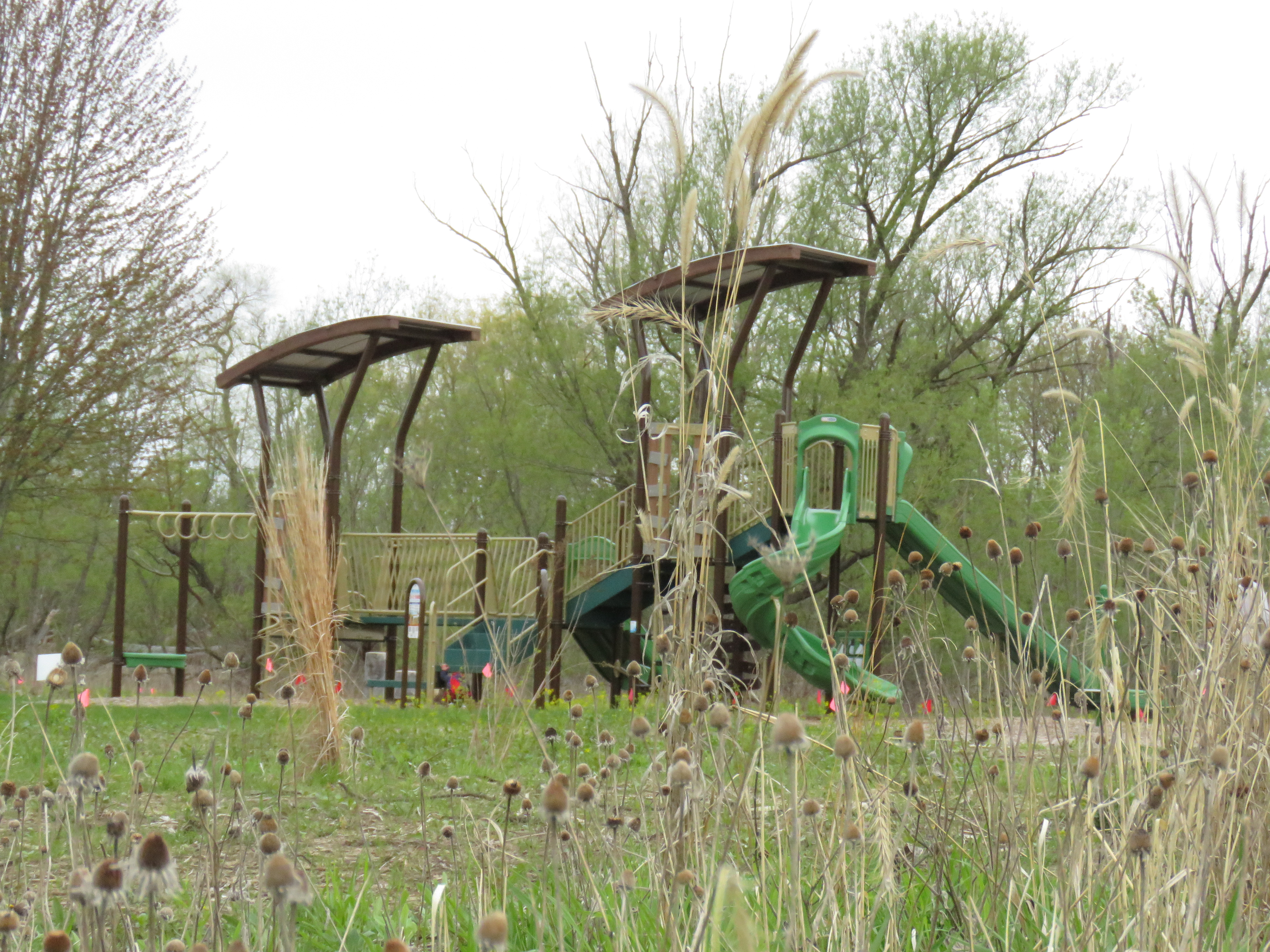 The action started the moment I arrived at the parking lot in the early morning hours. A pair of Killdeer scurried about between the lot and the restroom enclosure and their behavior made one thing clear – they liked the habitat and it was the perfect place for raising a family. Killdeer nest on open ground, and often favor gravel near parking lots. The nest and speckled eggs almost always blend in perfectly with the surroundings, as was the case here. I watched them for a few minutes until other sounds of nature’s way distracted me – the far less subtle, boisterous honking of Canada Geese.

The geese grazed near the beautiful new play structures installed with the help of about 40 volunteers last July. As soon as I began to walk towards the play structures, they retreated to the edge of the marshy area where I believe at least one pair is nesting; and that was the exact moment I had the biggest disappointment of my exploration – I was not quick enough with my camera to capture an image of a doe with her fawn at the very edge of the property that discreetly meandered back into the marshy area. Fresh deer tracks in the mud shared more of the story of their early morning meanderings, that included passing right next to a small observation deck that provides a view of the creek and productive wetlands.

Nature’s wondrous and at times mysterious distractions were everywhere in this gem of a nature-embracing roadside park, and one of the creatures that thrives in this park are a species of crayfish collectively known as “chimney crayfish.” They are night active creatures that crawl about the surface of the soil, hunting worms and whatever other delicacies they might find. Although they are seldom seen in action, their “smokestack” or chimney-appearing entrances are easy to spot and lead to underground burrows and side tunnels that often reach the water level. They are eye-catching structures and sometimes the mud in each chimney varies in color, evidence of the different types of soil that was excavated to create the structure.

The construction technique involves using leg and mouth parts to excavate mud and squish it into small balls which are then placed together in circular form to create the chimney. As for the purpose of the chimney, the jury is out, but I tend to lean towards the theory that during hot dry spells it keeps the tunnels moist. A side note of interest is that eastern massasauga rattlesnakes, the only venomous reptile of Oakland County, will seek out these tunnels for winter hibernation sites.

I left the crayfish field and meandered along near the edge of the creek, paying closer attention to the variety of bird songs and flashes of color from different species that flitted about the cattails and shrubs, making them very tough to photograph. Unlike the Canada Geese that all but posed for photos, the Yellow-throated Warblers that moved through the thickets and reeds searching for spiders and small insects made it very difficult to capture an image. I finally managed one that highlighted its colors well. Even when it was out of sight, I could still hear the very distinctive, “wichety-wichety-wichety” spring song of the male. 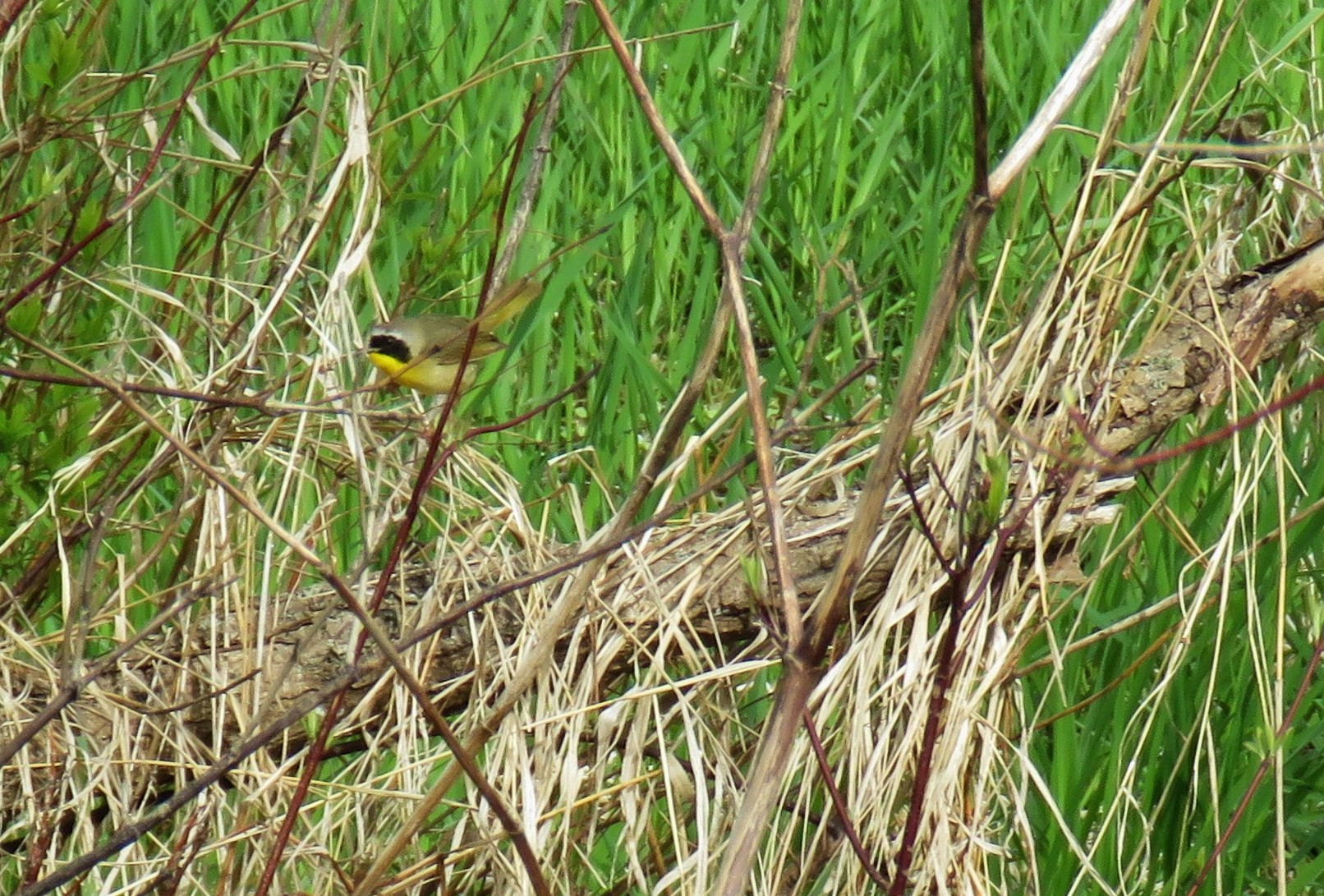 Oakland Township works hard to protect and plant native wildflowers, especially remnants of prairies, but in any disturbed soil, invasives will appear. When they are “attractive” to my eyes, I sometimes look at them as “naturalized beauties” and one of them that will bloom next month is the colorful ox eye daisy. I like that flower for its tender and tasty young leaves that emerge in early May, but left the grazing to the geese. 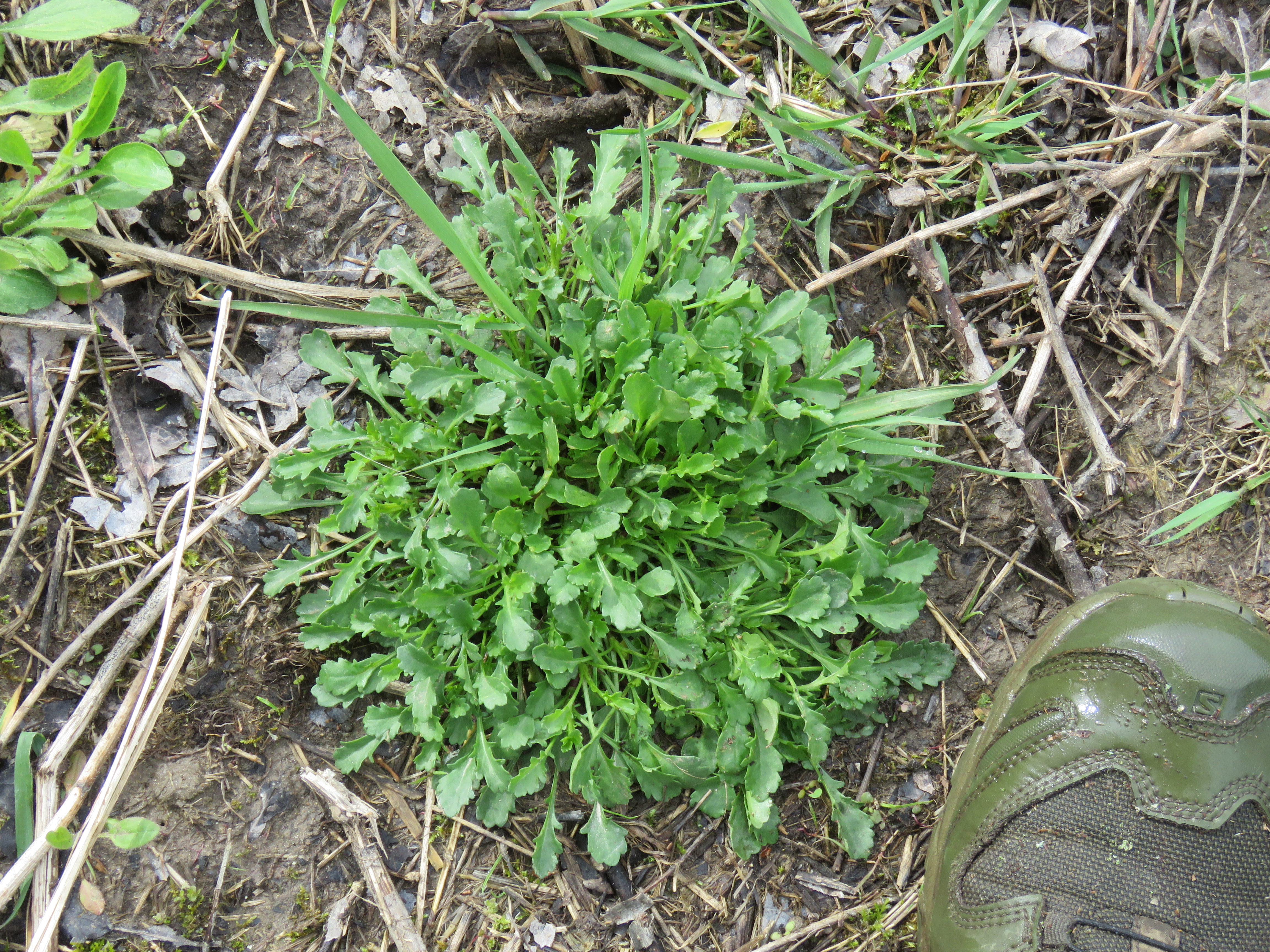 Mayapple is one of the most easily recognizable spring wildflowers by its distinctive foliage. Several large clusters are now prominent on site. In early May, they poked up through last year’s decaying leaves and emerged in moist meadows, with each plant resembling a fat green umbrella that was ready to unfurl. By the time June arrives, the tiny “apple” under the opened leaves will begin forming. 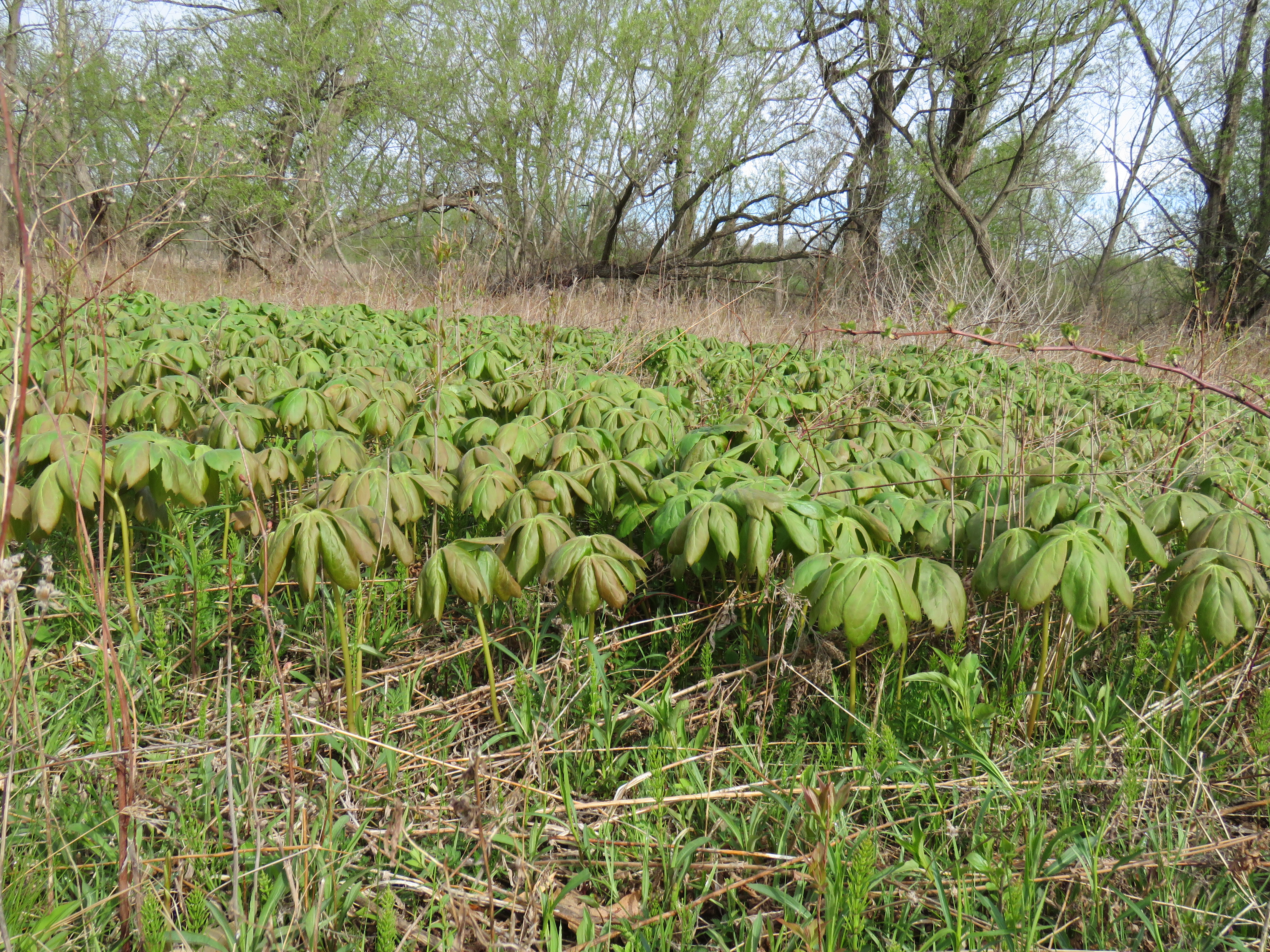 Some very large solitary skunk cabbage leaves are noticeable along the edge of the creek and that’s where I spotted a solitary leopard frog that vanished into tall grass without waiting for my camera. I also noticed a flash of color in the creek and could not tell what species of fish it might be, but discovered from Oakland Township’s Natural Areas Notebook blog that it might have been a brook trout. 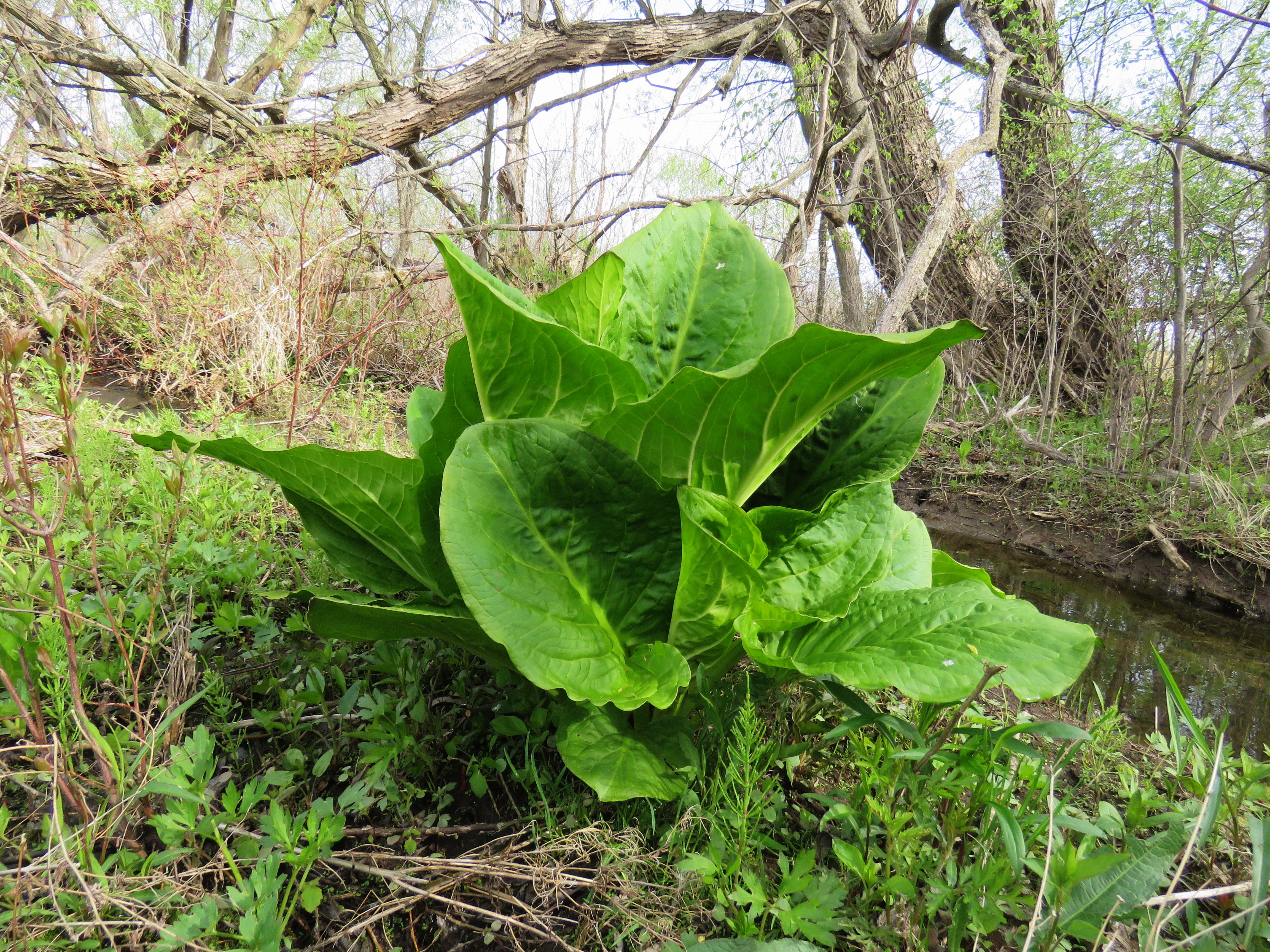 I’m glad the mystery fish appeared, for even if it was not a brook trout, it kept my attention on the creek and the music of the water’s flow blending with bird song, a perfect way to wrap up my first exploration of this delightful and nature-rich Oakland Township park, a small protected slice of the Wilder Side of Oakland County.

The public is invited to attend the Gallagher Creek Park and Pathway Grand Opening on Thursday, May 23rd at 4:00 p.m. Walk or bike on the new sidewalk from Adams Road and bring the kids along to enjoy the playground’s custom treehouse structure. Refreshments and giveaways will be available after the ceremony. For more information, call  248-651-7810.

One thought on “Gallagher Creek Park – A First Look”