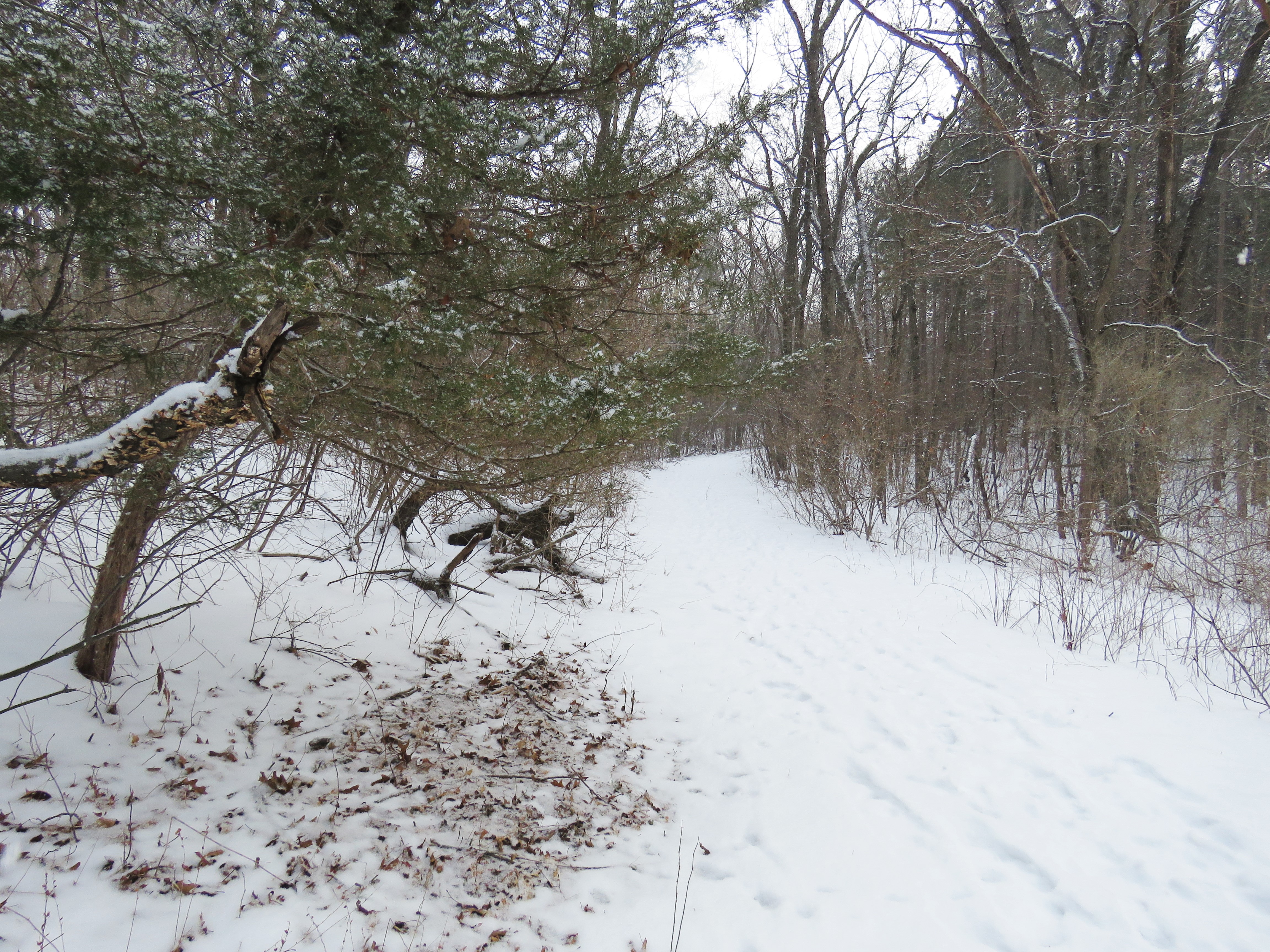 “Climb the mountains and get their good tidings. Nature’s peace will flow into you as sunshine flows into trees. The winds will blow their own freshness into you, and the storms their energy, while cares will drop away from you like the leaves of autumn.”

John Muir’s memorable words inspire adventurers to hike, and that’s a good thing. Hiking is excellent for our health and general well-being, and it doesn’t require a gym membership or any expensive equipment to get started. Being out in fresh air and away from the chaos of our daily lives, the frustration of traffic jams, and distracting technology allow us to reconnect with nature’s way, and that creates a feeling of peace and a sense of well-being. And any hike through a beautiful forested area, even when trails may be slippery as the duel between winter and spring accelerates, can calm nerves and lift our spirits. Hiking is also fun! 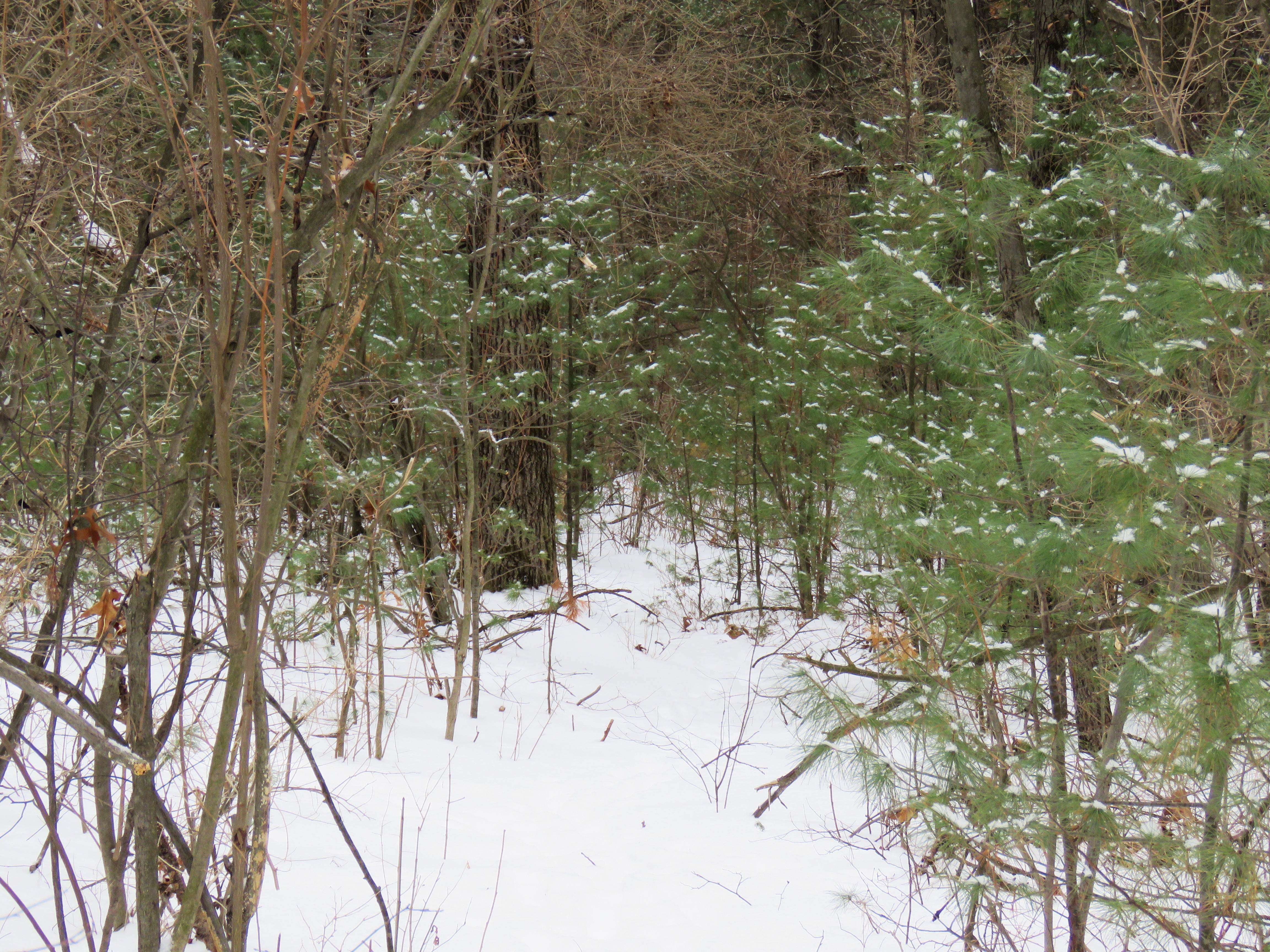 Perhaps the next time someone tells you to “Go take a hike,” you should thank them for being concerned about your health and set out on a woodland hiking adventure. Do it solo, with a friend or two, or bring the family.

So where does one start?

The nature-embracing trail I have in mind offers solitude, and creates a good workout for legs and lungs at the same time. And depending on the time of day, pace of your trek, and your willingness to stop often and look about, visual encounters with deer, wild turkeys, hawks and our magnificent Pileated Woodpeckers are rather likely. The sounds of spring are already coming alive in the woods of Bloomer Park Number #3, a site I frequented from time to time late last summer to get my leg muscles and back accustomed to a backpack in partial preparation for a five day hiking adventure on the Appalachian Trail. Bloomer is located in the southwest corner of the 5,480-acre Ortonville State Recreation Area at the very top of Oakland County. Its primary trail has enough elevation gains that folks that live in the “flatlands” of our county, such as the City of Troy or Southfield just might look at that trail as “mountainous.” 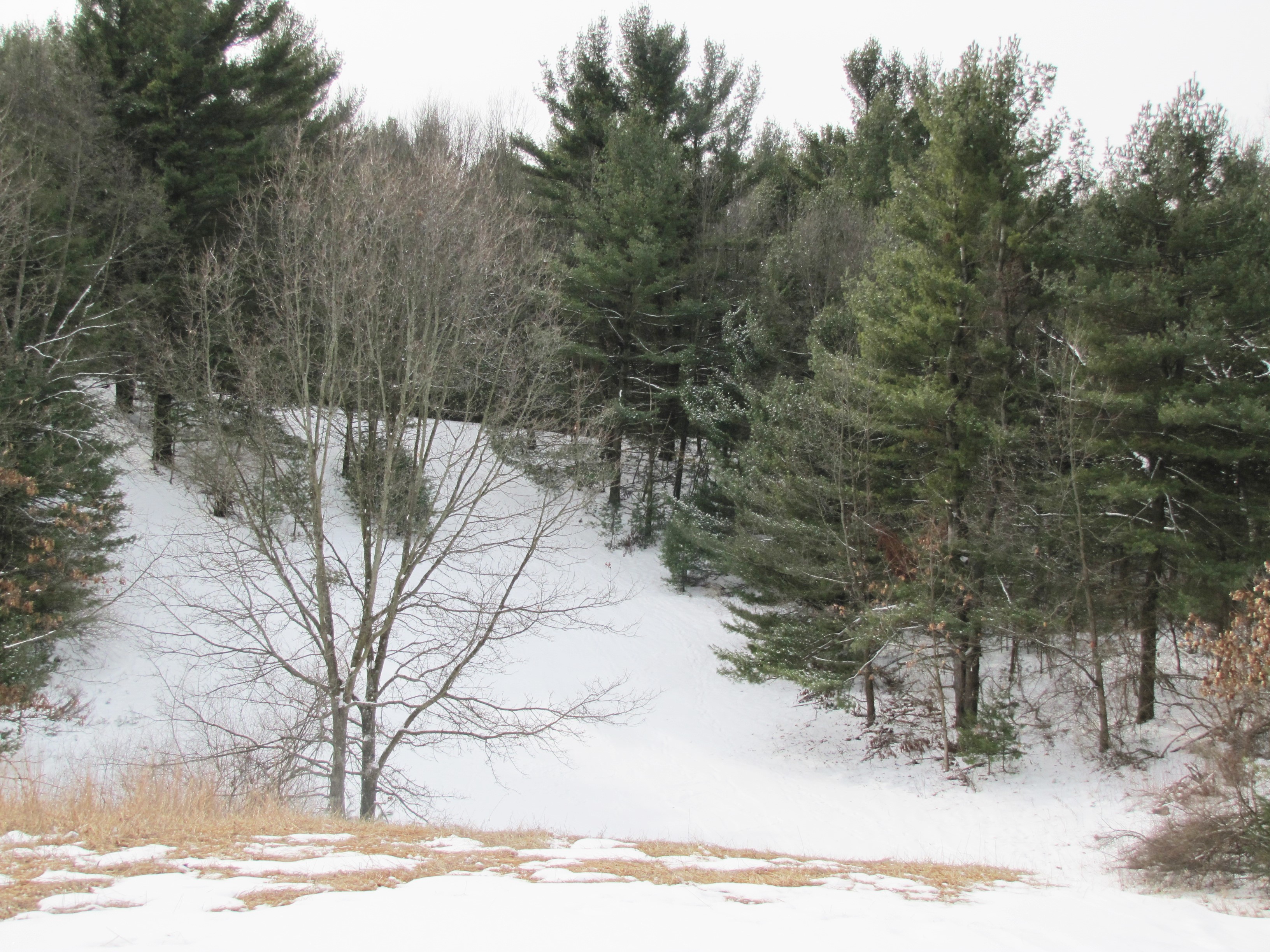 Early last Saturday morning, as the sky switched from totally cloudy to patchy blue, and then snow squall white, I meandered along that trail and did a fair amount of off trail exploring as well. A novice hiker at the Ortonville State Recreation Area should not wander off trail. The numerous hills, and steep slopes would make it easy to get lost, or at least “slightly bewildered” for a while, a phrase I have used for myself when where I think I am, does not match up with where I really am. However, if you stay on the primitive surface trail and pay attention to the seven sign post maps that appear along the route and bring you back to your starting point, you should do just fine. 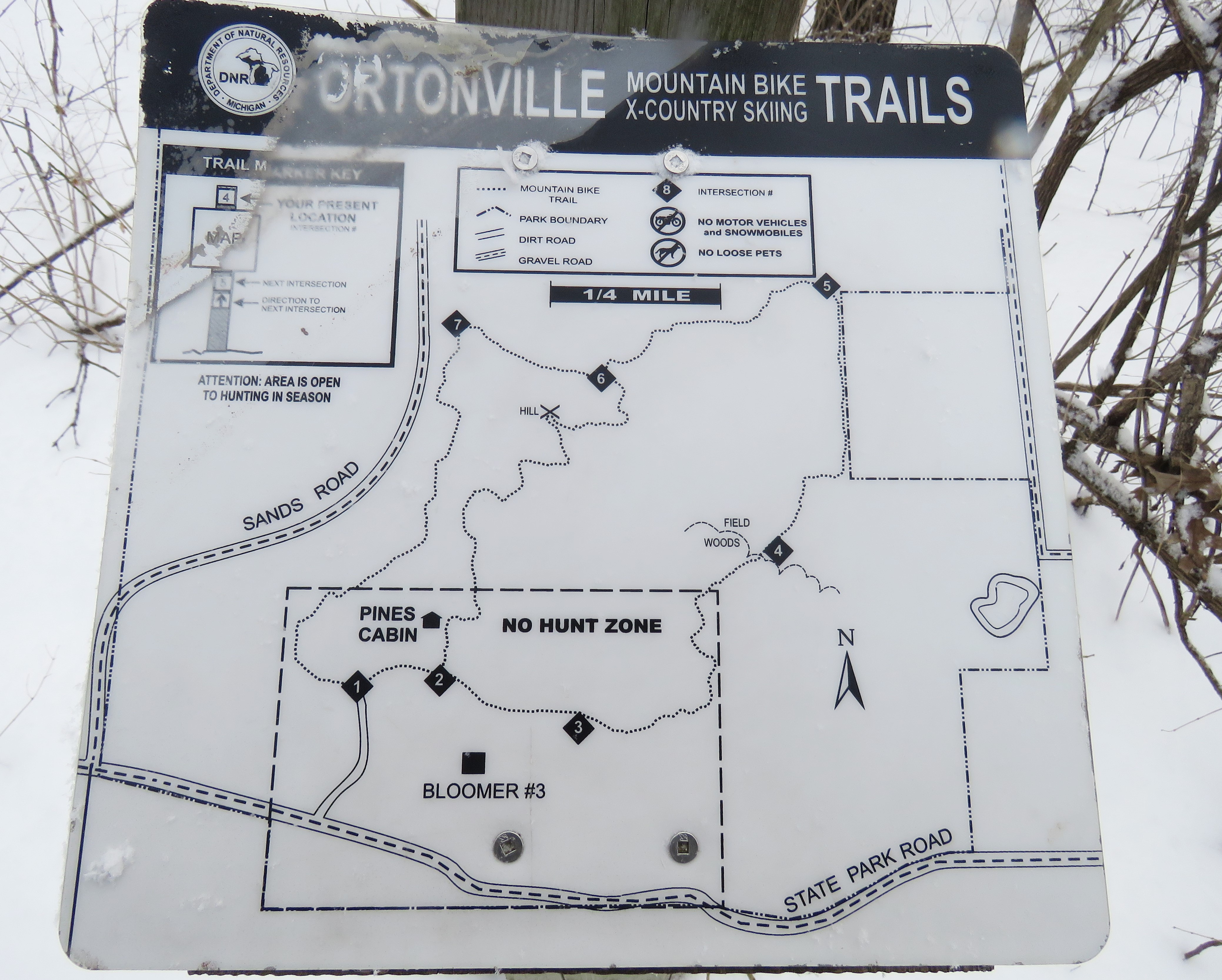 The vehicle entrance to the Bloomer section is located on the north side of State Park Road just a little east of Sands Road, not far from the Village of Ortonville. Caution is a necessity on State Park Road whether you access it from Oakwood Road to the east, or Sands Road. It’s often slippery in winter, as is the entrance drive at Bloomer #3. You also may encounter deer or turkey crossing the road. Don’t look for any facilities in this section of the Ortonville State Recreation Area. There are none with the exception of a porta-john next to a rentable rustic cabin about a quarter of a mile from the parking area.

The trailhead starts at the small parking area that the Michigan Department of Natural Resources keeps plowed. My Saturday meander sent me counterclockwise from trail marker number one towards two. Cross country skiing is permitted on the trail, but takes a bit of skill on the narrow tree-lined trail. The trails are not groomed and within minutes of my Saturday trek, I encountered a large tree across the trail that came down during the powerful wind-storm the week before. Marker two gives the option to cross the hills in a northerly direction, and for those in the know, it also presents a “back door” route to the cabin that would be tricky for someone not familiar with the area. I stayed on the longer route and meandered slowly uphill past markers three and four. During the final ascent towards marker five, keep your eyes to the right as the trail passes near a farmer’s field. It’s a great place to watch for deer and early arriving Sandhill Cranes, but be certain to stay on park property.

If you are looking for great viewing points to see for miles and miles, from one of the highest points in the county, you may be disappointed. Trees block the view. But for those that wish to embrace nature’s way as you trek along, just look near your feet and at the surrounding trees. Trailside glacial boulders are the prominent signature of the last glacial retreat, and the mix of hardwoods and deciduous trees provides excellent habitat for over-wintering birds and new spring arrivals. The unmistakable flight pattern of a Pileated Woodpecker drew my attention as I descended and slipped along a steep section between markers five and six. When I stopped to watch its masterful carpentry as it pounded away in search of carpenter insects and other insects behind decaying tree bark, I noted sometime else at my feet: the first emergence of snow fleas.

Snow fleas are actually not fleas at all, but a species of springtail. Because they’re very tiny (around 50 of them would fit on a penny) and tend to jump, they reminded people of fleas and thus were given that misleading name. Snow fleas (Hypogastrura nivicola) are harmless springtails that become active as soon as the ground begins to thaw in late winter or very early spring.

I continued my nature-embracing trek, encountering no one else except for a couple with their leashed dog. After reaching marker seven, I did more off-trail meandering that was well rewarded with more sightings of Pileated Woodpeckers, the largest woodpecker in Michigan, and Downy Woodpeckers, the smallest. I wrapped up my hike with a steep back route trek to the cabin and had mixed feelings on my final wildlife encounter. Unknown to me, a Great Horned Owl had settled in for the day in the white pines on the hillside above the cabin and took silent flight at my snow-crunching approach. Watching it fly off on powerful wings was refreshing and made me wonder how many other wild creatures had noted my presence in this wildland that truly is on the wilder side of Oakland County. 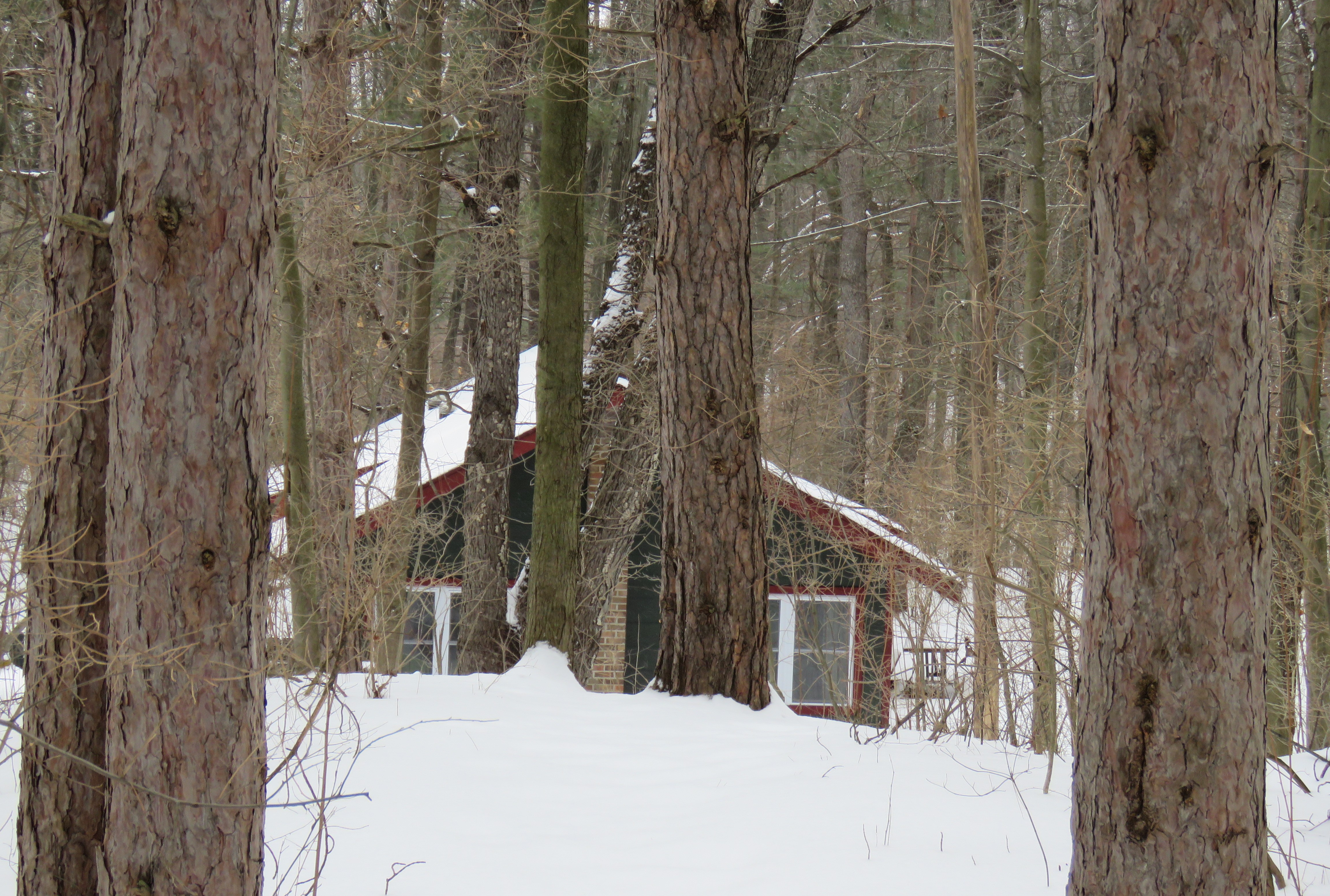