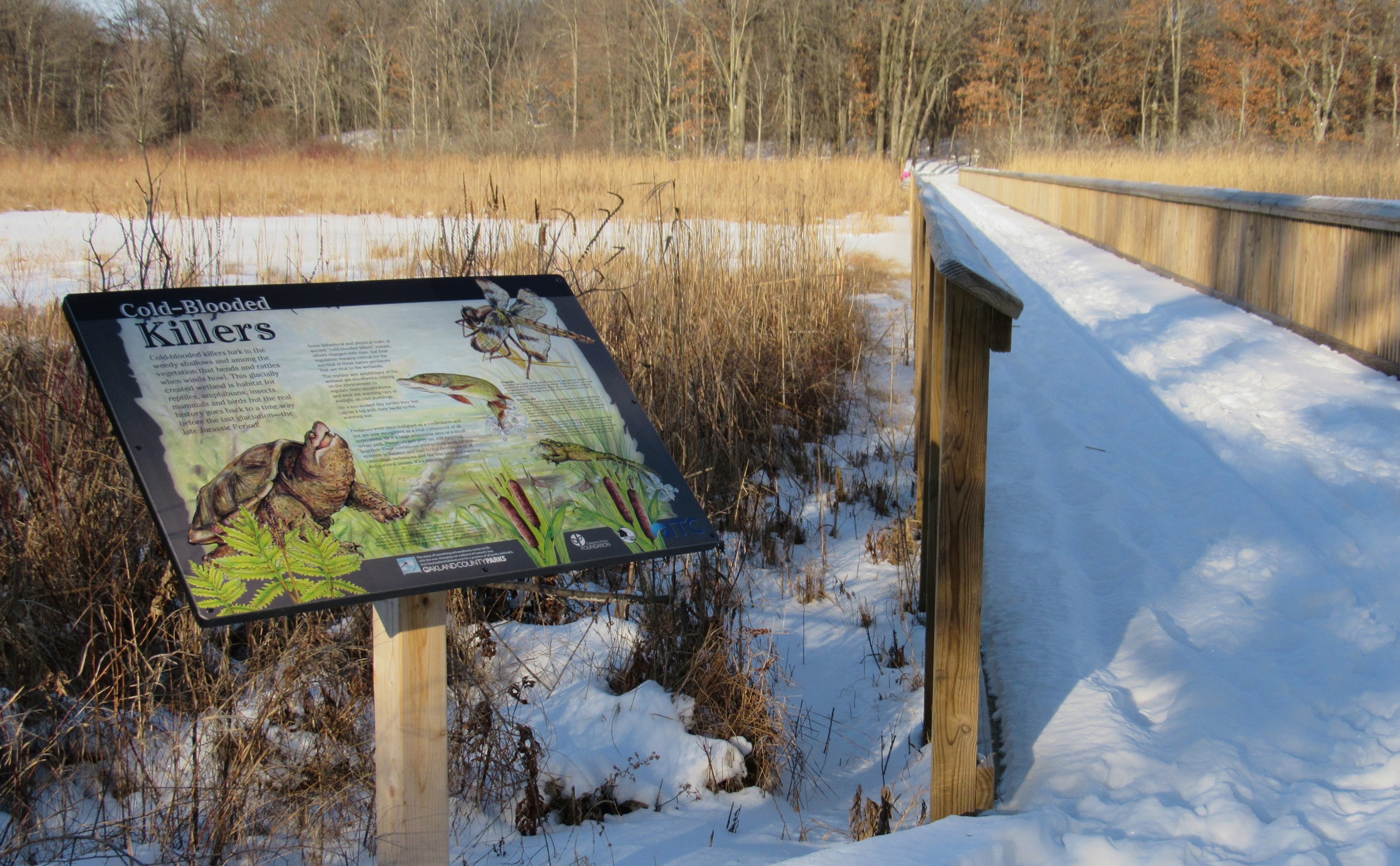 Rose Oaks County Park is a nature-embracing and easily accessible winter wonder that presents wide-open vistas, glacially sculpted wooded hills and hidden secrets of nature exposed by tracks and trails in the snow. Six hundred forty acre “Rose” is one of my favorite parks managed by Oakland County Parks and Recreation. I look at her wildness as an early morning wintry haven of solitude enhanced by wind whistling through groves of evergreens, the chatter of chickadees, gurgling waters of icy streams, the near magical mesmerizing booming of lake ice expanding and contracting, and in a few more weeks, the magnificent rattling bugle calls of Sandhill Cranes. The sounds of nature in winter make every trek a delight for those that walk slowly, stop often and listen. The song of coyotes in the moments before sunrise just might be your greeting, and as the sun climbs higher, the distinctive call of the Pileated Woodpecker signals the woods are awakening. 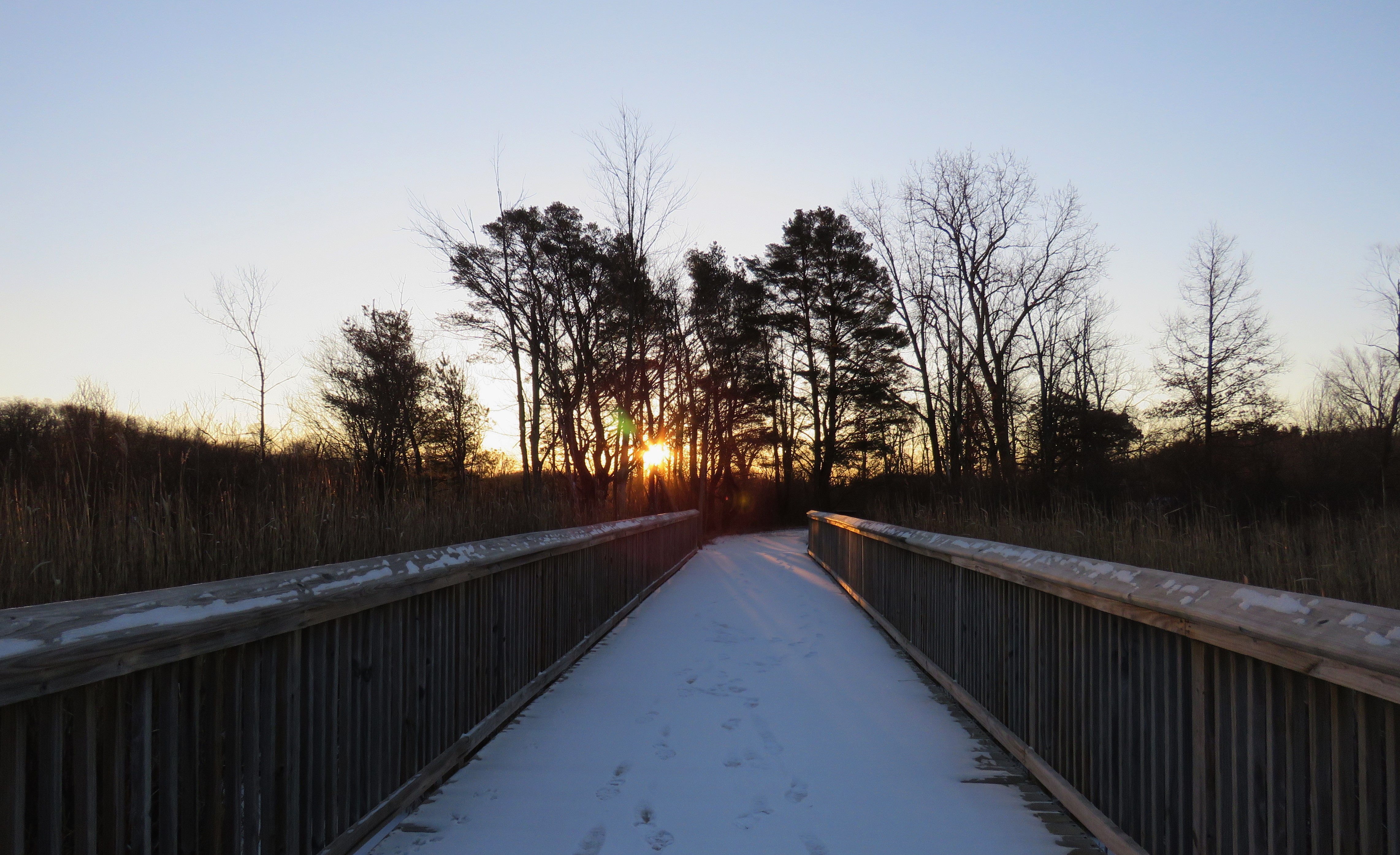 I’ve hiked the park’s interconnected five miles of trails in all seasons, and went back again early last Saturday morning just a few minutes after sunrise under a spectacularly clear blue sky. We started our trek at the eastern entrance of the park on Buckhorn Lake Road. The lesser used equestrian-friendly western entrance is located on Fish Lake Road. Both entrances have porta johns and trail informational signage, but don’t come to Rose looking for modern facilities or a nature center building. You won’t find them, but you will find a great trail system, including boardwalks that take trekkers and wildlife over wetlands. Although the trail junctions are well-marked in most locations, a first timer hiker at Rose Oaks would do well to print a trail map before arrival and practice situational awareness – bearing in mind no ice is safe ice and ice thickness is not monitored by park personnel. 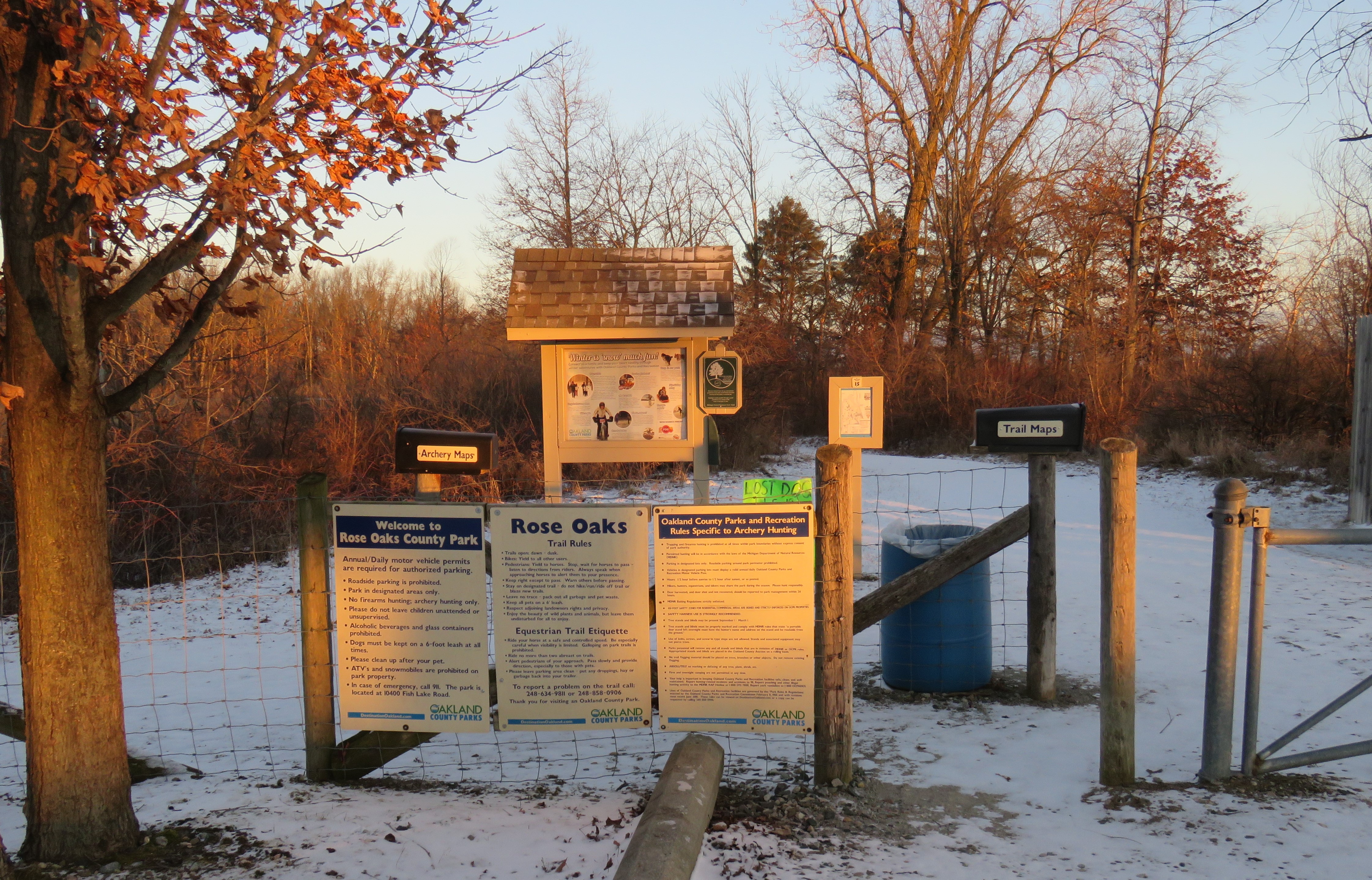 The muffled crackling of ice was our greeting party, for ice is dynamic and even slight temperature variations can cause ice to move and generate sound waves that may sound musical or resonate like a deep distant thunder-clap. Rose Oaks has six named lakes: Richardson Lake, Esler Lake, Mallett Lake, Cogger Lake, Prairie Lake and Big School Lot Lake, as well as small vernal ponds. Cogger Lake and Mallett Lake have docks complete with kayak launch sites, ramps now frozen in ice. Although the temperature struggled to climb into double digits, water flowed freely in one creek and some wetland areas had visibly thin ice. 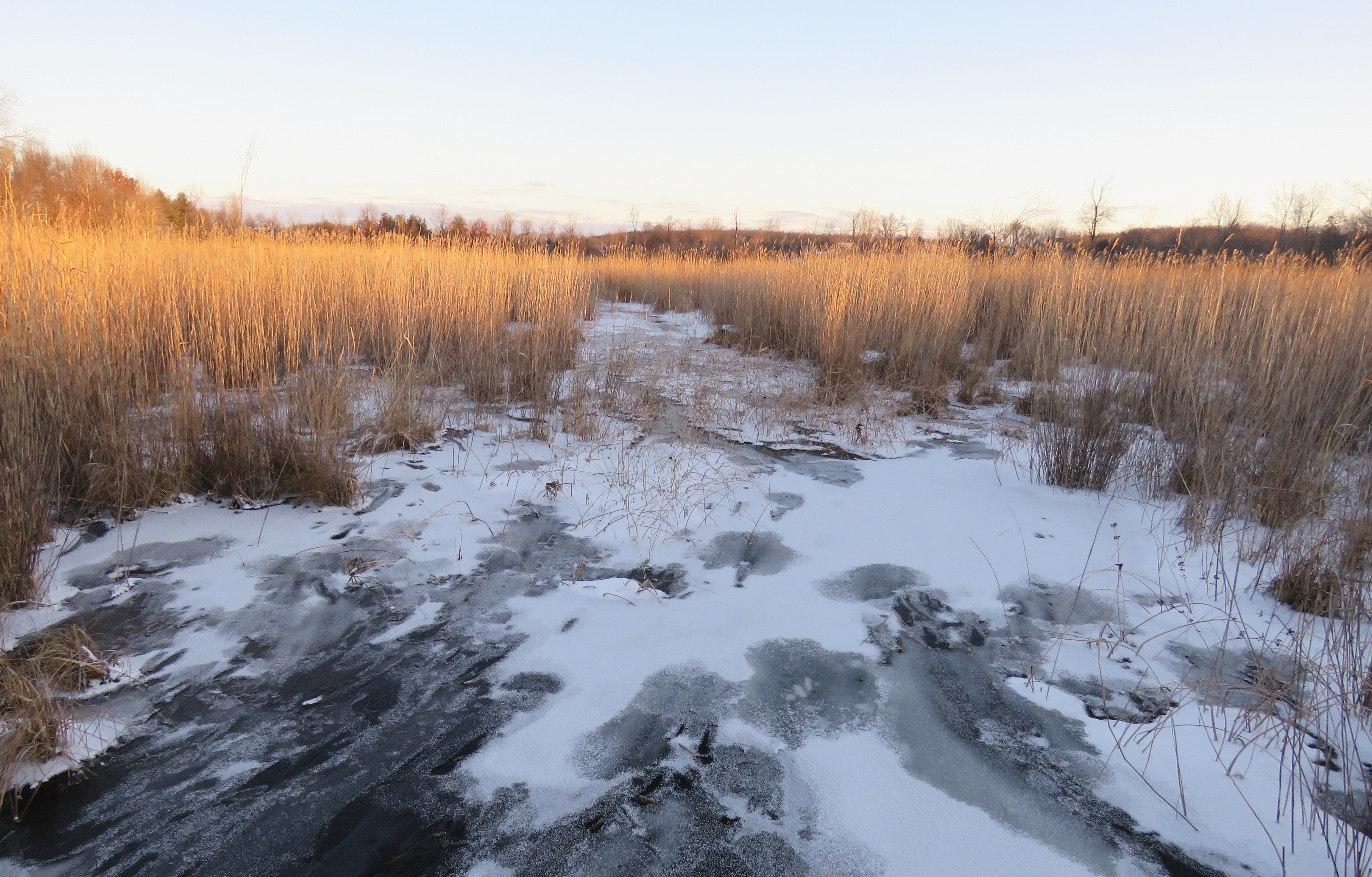 Our initial destination was Richardson Lake. As we approached the first boardwalk on the way to the lake, we paused to read the text about the “Cold-Blooded Killers” that live in the marsh, lively descriptions of northern pike, dragonflies, snapping turtles and frogs. Before reaching the lake we passed through an Oak Wilt Monitoring Area, a stark reminder that Oak Wilt Disease, a fungal pathogen (Ceratocystis fagacearum) that kills thousands of oak trees in North American forests and woodlands each year, is a serious threat to Oakland County.

The fresh powder of snow created the perfect easel to frame wildlife stories in the snow. As we approached the southeast corner of Richardson Lake we encountered fresh coyote tracks that proclaimed it’s breeding season: a pair of coyotes had been traveling side by side following the trail. And when they reached the boardwalk bridge at Richardson Lake they did what any trail savvy coyote would do – they crossed over on the bridge.

I smiled at that encounter, for it was almost that exact location where four years ago I had placed a well concealed motion activated trail camera that captured the image of this coyote.

We circled around the east shore of the lake, making note of another colorful interpretive sign, this one with the catchy heading of “Best Dam Engineers in the County.” It was a great reminder that beavers also inhabit the park and alter their landscape to suit their needs, sometimes to the chagrin of humans that don’t like their plans. The beavers will remain in their cozy lodges until ice-out, occasionally exiting down a lodge tunnel to shop at their underwater food caches of tree limbs stashed away last autumn. Feasting on the bark and cambium layer of the limbs takes place after they haul the day’s meal back to their feeding platform within the lodge.

Our slow-paced meander took us past a picnic bench high up on the western side of Richardson Lake, a site that provided a perfect slightly off trail vantage point to look down at the frozen lake: a perfect site for a winter picnic for the hardy. That’s when we noted more coyote tracks that led across the lake from the southwest corner to the northeast side.

Other coyote tracks veered into vegetated areas of the frozen marshes, a perfect place to hunt for mice and voles. We also noted numerous skunk tracks that crisscrossed the coyote tracks, for this is also the season that “love is in the air” for striped skunks, a species that most likely is not on the coyote’s fine dining menu. The chief, perhaps only, predator of skunks at Rose Oaks is the Great Horned Owl. The owls apparently “taste” the skunk but with their poorly developed sense of “smell,” a skunk is simply another meal.

As we meandered along admiring the mix of wildlife tracks, an oak leaf frozen in ice in an artistic upright position caught my attention. To capture a good photo, it was necessary to flop down on my belly, an action captured by my hiking companion that she later shared with me. We encountered no other humans during our visit, but as the sun climbed higher, Black-Capped Chickadees flitted about trailside shrubs almost as if they wished to share the adventure. One suddenly switched its typical “chick-a-dee-dee” vocalization of winter, to the two-noted whistled “fee-bee” vocalization, a call that is more common as spring approaches. The chickadees seemed to be celebrating their sense of power, and I sensed my exhilaration of freedom to wander a trail that had just been trekked by “brother” coyote.

During the final mile and a half of our leisurely paced trek, we hiked to a small stream near the western side of the park. It was the perfect place to pause and listen to the music of water against ice as it flowed into a protected wetland, a wetland marsh complex that is a seasonal home for Sandhill Cranes.

In just a few more weeks, the music of the stream (listen in the video below) will be joined by the bugling return of the Sandhill Cranes that breed at Rose Oaks, a natural history moment described well in A Sand County Almanac, a book of essays by Aldo Leopold published in 1948.

“High horns, low horns, silence, and finally a pandemonium of trumpets, rattles, croaks, and cries that almost shakes the bog with its nearness, but without yet disclosing whence it comes. At last a glint of sun reveals the approach of a great echelon of birds. On motionless wing they emerge from the lifting mists, sweep a final arc of sky, and settle in a clangorous descending spirals to their feeding grounds. A new day has begun on the crane marsh.”

It’s a moment that will be noticed by the coyotes and hopefully I’ll be there too, for in the world of nature, all things are connected on the wilder side of Oakland County.

For information on Rose Oaks County Park and all 13 parks managed by Oakland County Parks and Recreation, visit: www.oakgov.com/parks.

2 thoughts on “Rose Oaks – A Wonder in Winter”