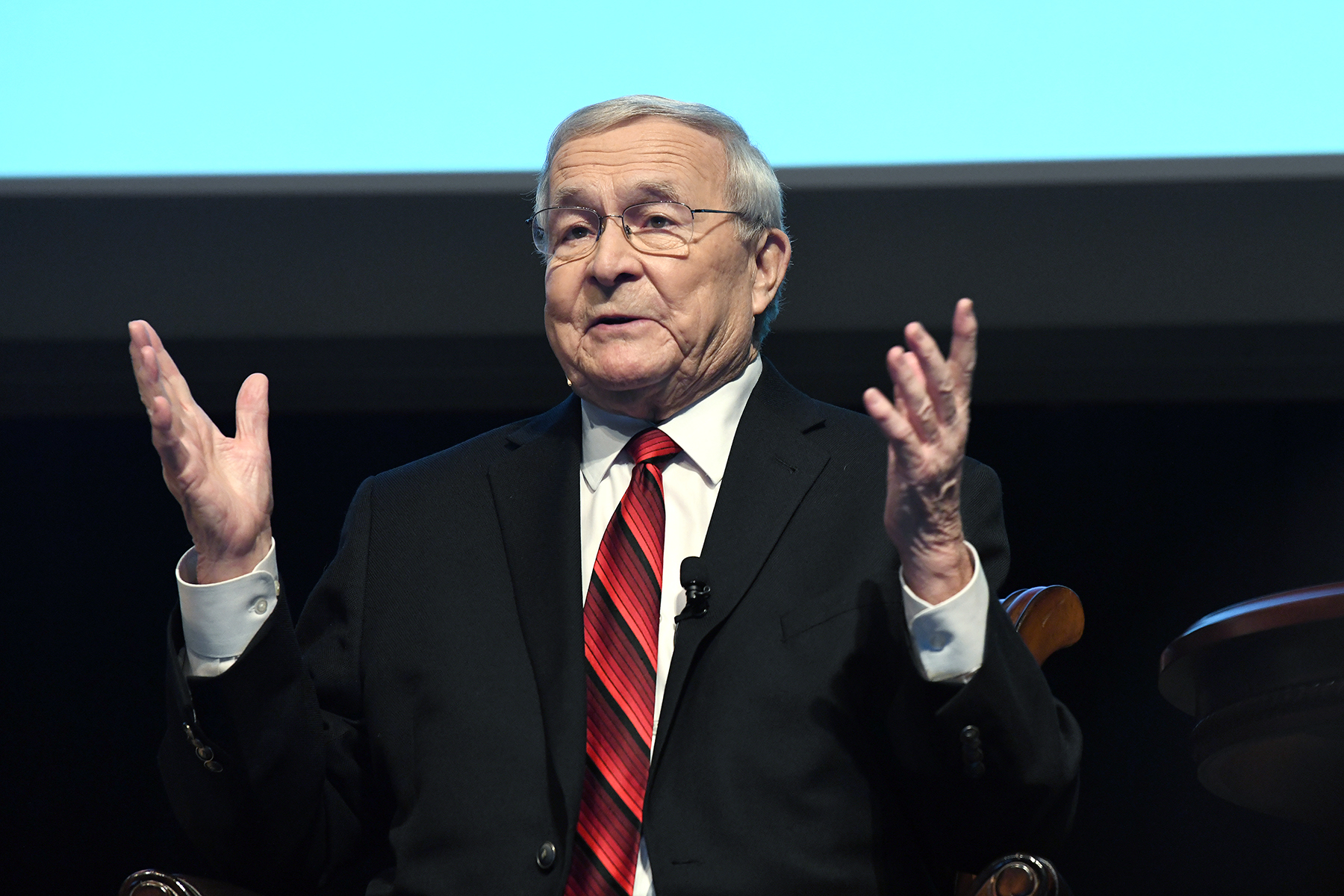 Patterson opened his address with words of congratulations for Kristin Rohrbeck, as she was revealed as the winner of Oakland County’s Elite 40 under 40 Class of 2019. Rohrbeck, 32, is the director of the Oakland University Joanne and Ted Lindsay Foundation Autism Outreach Services (OUCARES).

Overall, project successes have created 51,662 jobs in these diverse fields and have retained 37,337 more.

In addition to the success of Emerging Sector firms, Patterson reported that the County’s economic outlook remains bright. Referencing a forecast from University of Michigan economists, Patterson explained that the County is on track to add 42,000 jobs between 2018 and 2020.

Patterson highlighted the success of “MICareerQuest Southeast,” a regionally based program that introduces high school students to companies and careers in their area, as an effective approach to closing the talent gap.

Around 10,000 students from 197 school districts participated in the first MICareerQuest Southeast event. The students, hailing from Oakland, Livingston, Macomb, Monroe, Washtenaw, and Wayne counties, met with and learned from 800 exhibitors at Suburban Showplace.

Patterson noted some recent achievements made by one of his signature economic development initiatives: Main Street Oakland County. Launched in 2000, the redevelopment program promotes a “sense of place” in downtown communities. It is the first and only countywide Main Street program in the county.

“We want Oakland County to be the destination of choice for dining, shopping, and entertainment,” Patterson said. “Main Street Oakland County helps governments redevelop their downtowns into vibrant, successful districts that serves as the heart of their communities.”

In addition to fostering healthy main street communities, Patterson spoke about the need to jumpstart retail and commercial efforts in select areas through “Corridor Improvement Authorities.”

“The idea is that infrastructure improvements, such as road and sewer upgrades, may be made to certain commercial corridors to make them once again more attractive to investors,” Patterson said.

Remarkable progress is also being made in Brownfield redevelopment. “Brownfields are old industrial properties that need to be cleaned up to build anew,” Patterson said. The Oakland County Brownfield Redevelopment Authority’s recent projects have attracted $270 million in new investment, leading to 1,900 new jobs.

Patterson held up two high-profile projects in the heart of Oakland County as paragons of redevelopment success: the defunct Summit Place Mall in Waterford, and blighted properties in Pontiac. Ari-El Enterprises, a Southfield-based commercial real estate firm, purchased Summit Place Mall in September. The company plans to clear the site for new development in April, 2019. Pontiac’s blighted properties, once numbering 960, will be reduced to zero by year’s end. The progress is the result of a years-long collaboration between government agencies and private partners from Bill Pulte’s Blight Authority.

There once were 960 blighted homes in @cityofpontiac.

Thanks to our partners in #Pontiac, the state of #Michigan, and Bill Pulte’s @BlightAuthority, there will be none by the end of 2019. #Brooks2019 #OaklandCounty

Patterson celebrated advancements in public health made by the County this past year. After Southeast Michigan experienced the largest Hepatitis A outbreak in U.S. history, Oakland County is no longer considered an outbreak county by the Centers for Disease Control and Prevention (CDC).

#OaklandCounty Health Division has garnered national recognition for its #EmergencyPreparedness.

Patterson recognized the diligent, heroic, and charitable works performed by Oakland County residents and employees over the past year. The stories include a fruitful investigation conducted by Health Division employees Nadia Batarseh and Richard Peresky, whose discovery of lead in Baraka curry powder lead to a national voluntary food recall.

Patterson also highlighted the life-saving actions of Oakland County Sheriff’s Deputy Michael Miles. Miles pursued a speeding vehicle in Orion Township during the early morning hours of January 28, 2018. The speeding vehicle lost control and crashed, catching fire in the process. Deputy Miles was able to rescue the trapped driver and pull him to safety before the flames could reach him.

The Oakland County International Airport, which has a $675 million impact on the region, is more than an economic powerhouse. Patterson celebrated the efforts of more than 2,000 volunteers at the airport, who supported Operation Good Cheer, a gift giving program that delivers gifts to foster children across Michigan during the holiday season. Last year, volunteer pilots delivered 20,000 gifts at Christmastime.

“Oakland County International Airport has more than just an economic impact,” Patterson said. “It has a community impact as well.”

In addition to his stated vision for Oakland County’s future, Patterson checked in on programs and initiatives that had been highlighted during previous State of the County addresses

G2G is Oakland County’s initiative to collaborate with other governments by providing and sharing cloud-based technology. It generates $2 million in annual revenue which is shared with local partners in cities, villages, and townships.

CLEMIS is a law enforcement system that promotes the sharing of information between local, state, and federal agencies. It has more than 200 agencies in its network, making it the largest crime data sharing network in the United States. CLEMIS recently added Huron County to the network, bringing the total number of member counties to nine.

2020 will mark Oakland County’s 200th anniversary. In celebration, a series of bicentennial festivities will take place throughout the year. Patterson and Judge Michael Warren, who is chair of the Bicentennial Committee, unveiled the event’s official logo.

To read or watch Patterson’s 2019 State of the County Address, visit the County Executive Homepage.