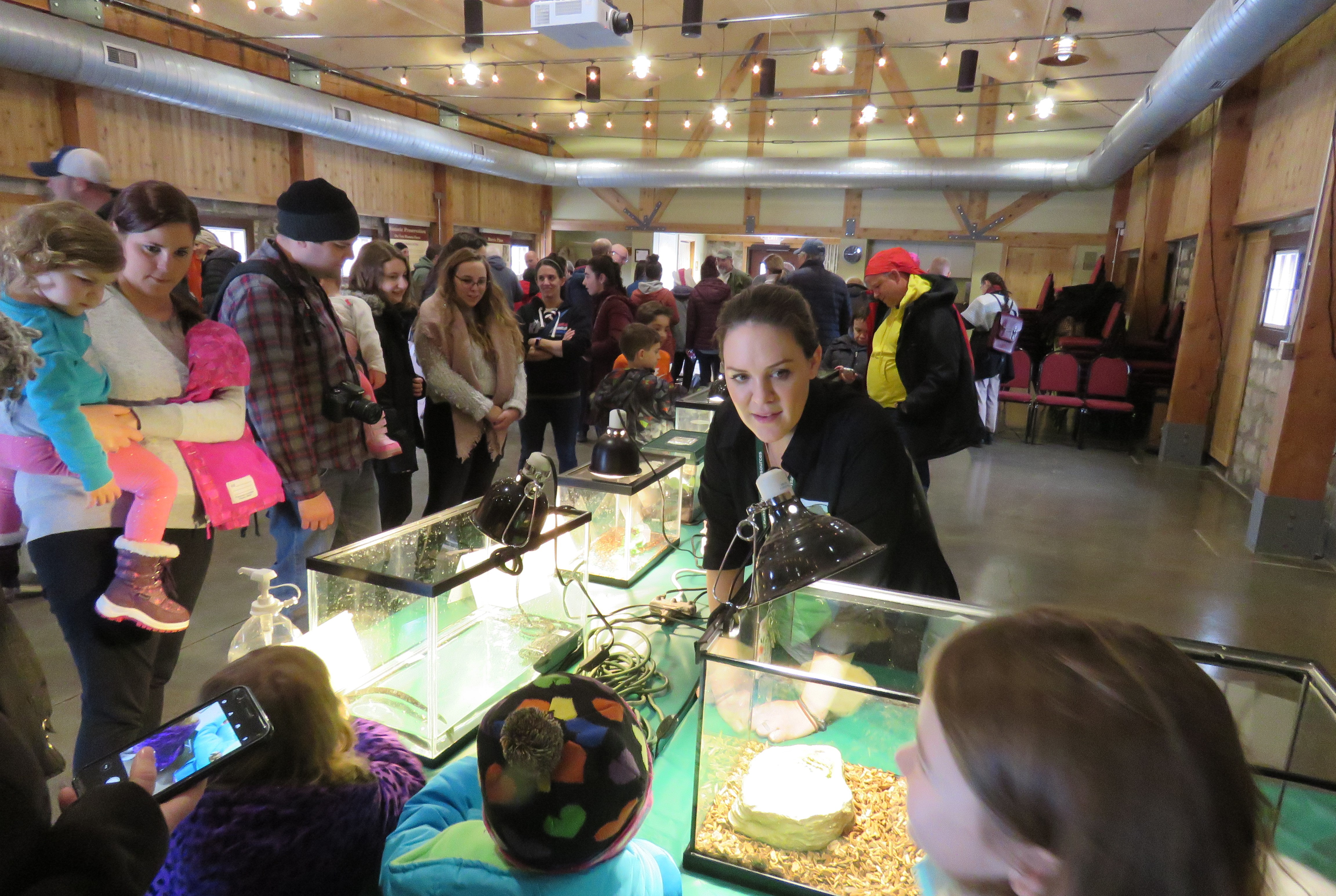 Nature in winter is an amazingly beautiful and at times mysterious place, especially when the temperature plunges well below the negative zero mark, as it did in the pre-dawn hours of the Blood Moon Eclipse. Some humans celebrated that onslaught of winter, while others acted like the world was about to end. We humans are endotherms, creatures that create heat internally. One could say we are actually walking heat-generating furnaces. Thanks to our physiologic adaptations, adaptations we share with many other mammals, we can pretty much maintain a nearly constant body temperature if properly attired and sheltered from frigid winds. We can also go inside. We can turn the heat up. And some of us can even fly off to exotic tropical locations. 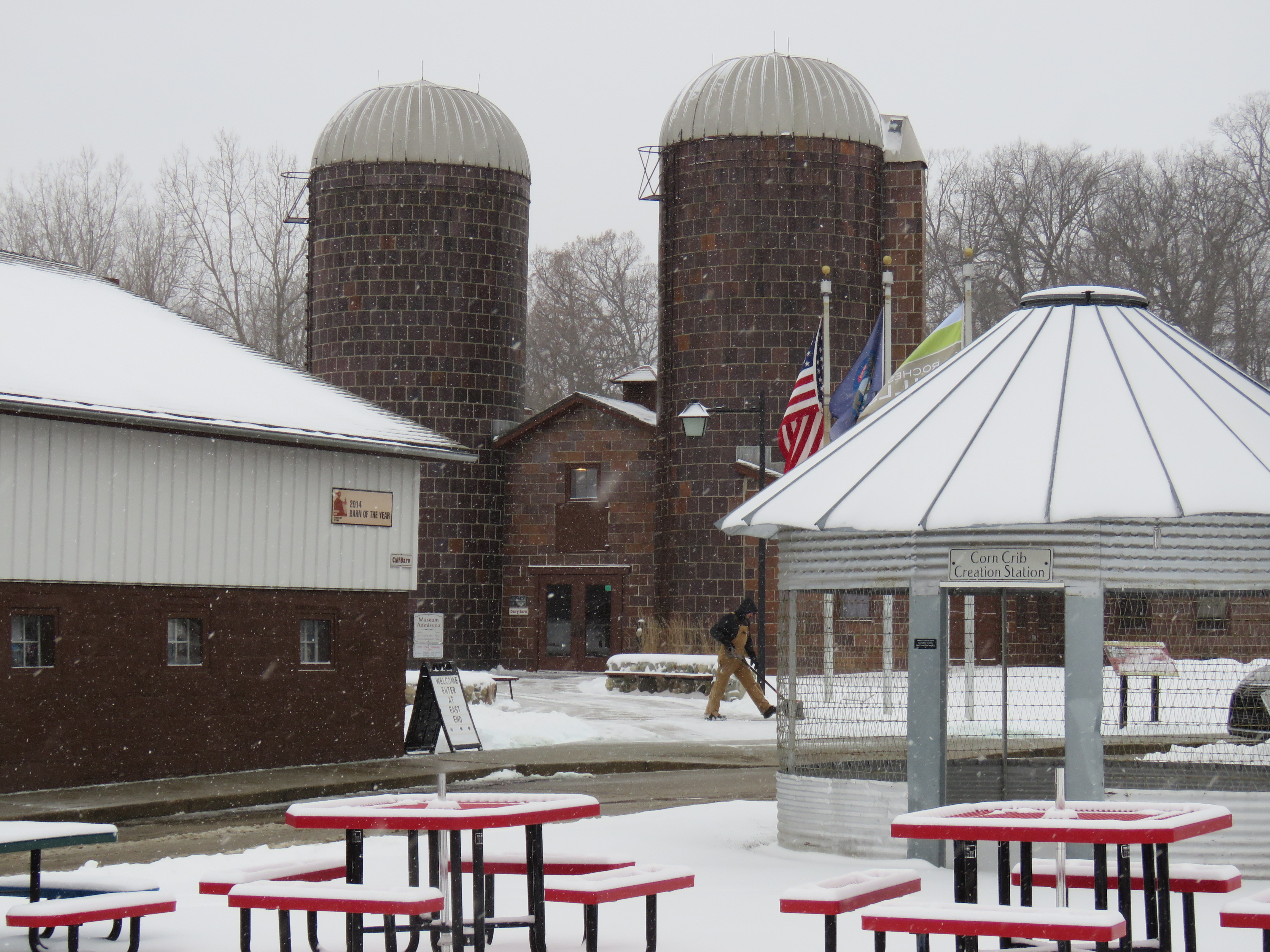 The reptiles and amphibians living in our midst can’t generate heat and can’t go anywhere. They are ectotherms, creatures that rely on an external heat source. They hunker down right here in the county and get cold, very cold. A painted turtle in a pond capped over with ice is the same temperature as the water. Its metabolism slows down to a crawl. The wood frogs now buried under snow and ice are so cold they have transformed into what is perhaps best described as “frogsicles” – more on that later.

With those thoughts in mind, I headed off to last weekend’s Reptile Roundup, a special event held at the Van Hoosen Farm presented by the Parks & Natural Resources Department of the City of Rochester Hills. Even though snow was swirling and roads were slick, the indoor event drew about 150 people, mostly children accompanied by adults, and a few adults not accompanied by children. Count me among the latter group, for I’ve loved reptiles and amphibians ever since my first Golden Guide to Reptiles and Amphibians book came my way while I still ran barefoot in the woods of rural Connecticut as a little kid. As I meandered about the enthusiastic crowd, I heard all sorts of questions being tossed to Rochester Hills Outdoor Interpreters Lauren Oxlade and Lance DeVoe, including one that inspired today’s Wilder Side of Oakland County blog post, “Where do snakes go in winter?” I wanted to interrupt and tell that smiling wide-eyed young girl, “Maybe into your basement.” I decided that was not a wise reply, even though it’s true. 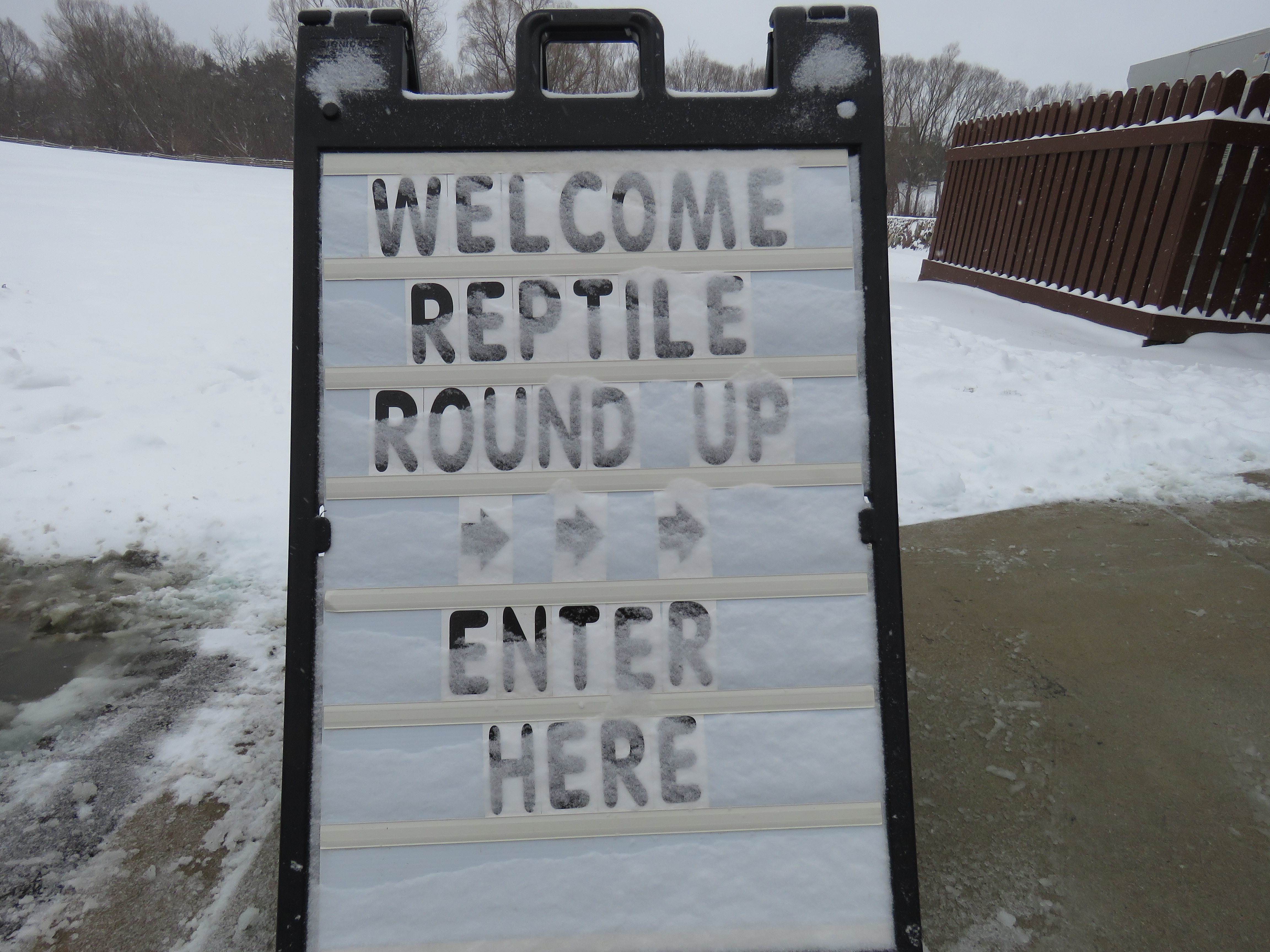 Hunkering down in a safe spot is essential for all reptiles and amphibians, creatures that pretty much remain in the same area all of their lives. During winter, they have various techniques to survive: below the ground, below the ice of frozen ponds and at times in basements, especially when it comes to snakes. Snakes seek out ways to get below the frost line, slithering down into crevasses in the earth or under decaying downed trees and leaf litter to prepare for months of inactivity. Our native Eastern Massasauga Rattlesnakes actually spend the winter in moist crayfish burrows beneath the frost line in a state of near suspended animation! And every once in a while, a snake finds a small crack leading to an unfinished basement, as was the case with a large milk snake that slithered into mine as autumn days cooled. 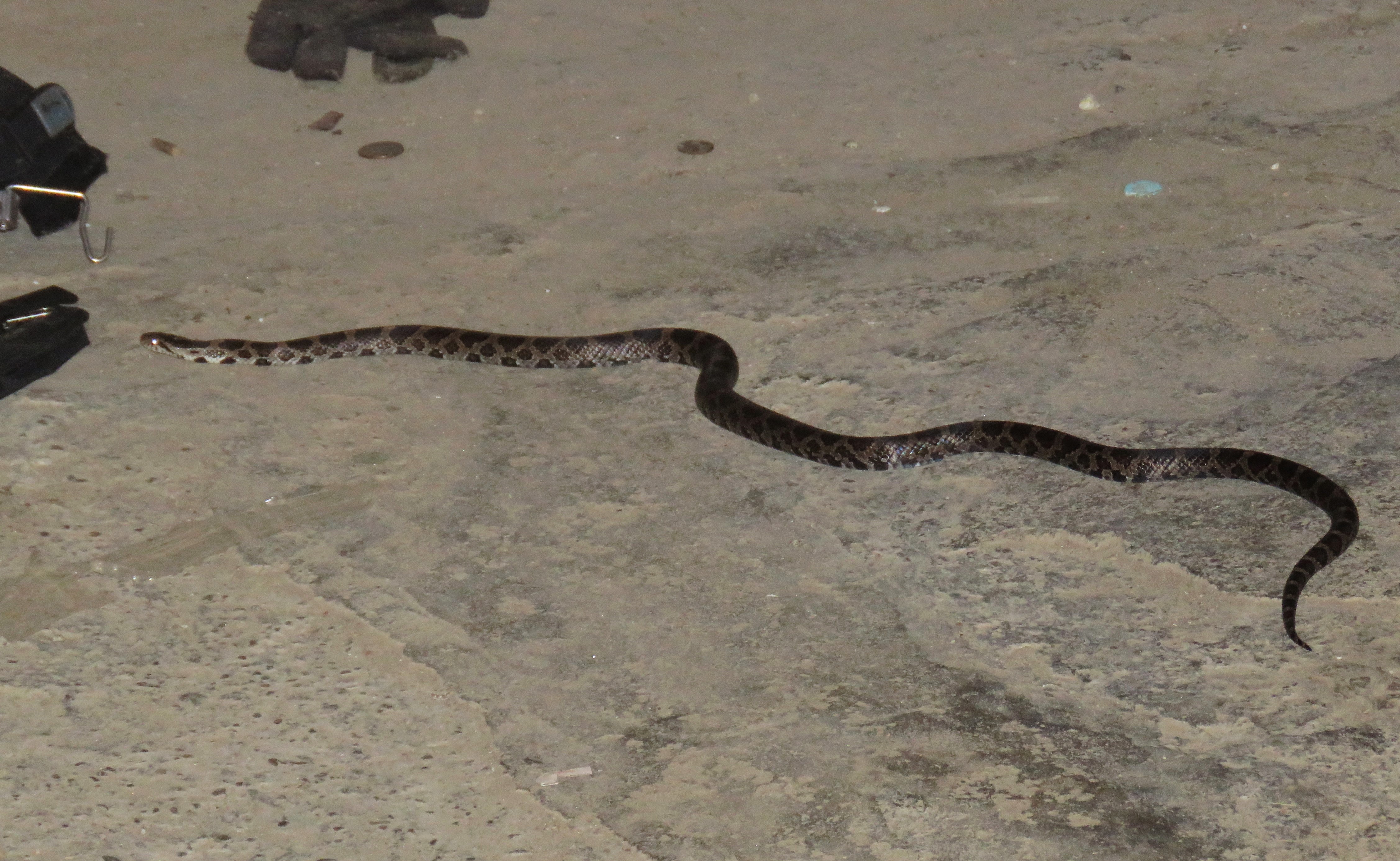 The educational ambassador species at the Reptile Roundup were set up in portable displays to ease viewing, not in their normal, far more spacious captive habitats. One of the creatures that drew a lot of attention at Reptile Roundup was a box turtle. Sadly, the eastern box turtle, a terrestrial species that may wander fifty yards or more in a day, no longer breeds in the wild in Oakland County. When winter approaches, box turtles find a sheltered place such an abandoned groundhog den or burrow deep into the ground and become extremely lethargic as they enter a hibernation-like state known as brumation. 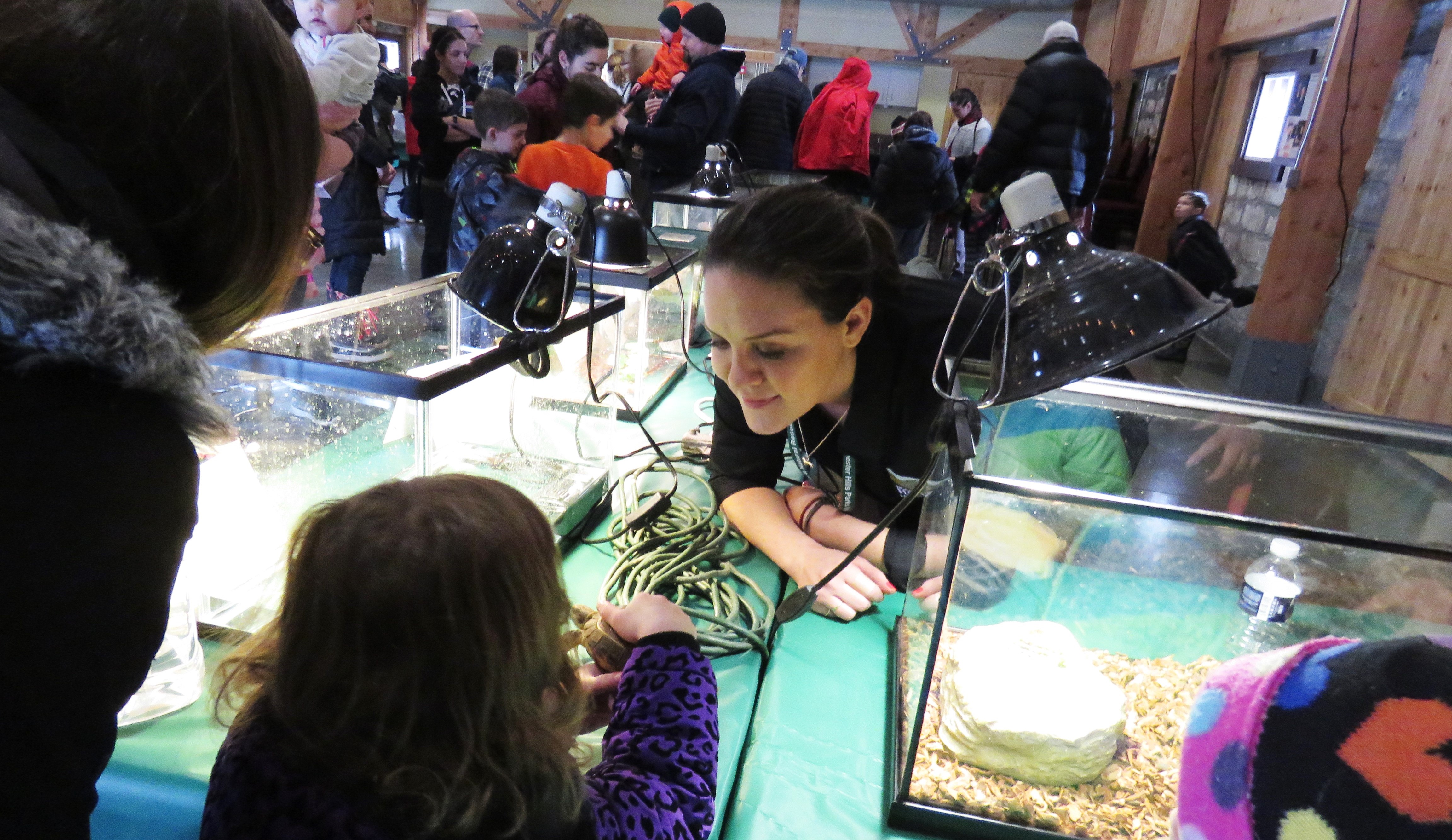 A baby snapping turtle was a real hit with the kids and one of the creatures that could be gently held. The snake species were “touchable” and with the encouragement of Lance and Lauren, science triumphed over fears and fallacies. For some children and adults, it was the first time they ever touched a snake.

The Reptile Roundup included exotic species presented by Jeff Peck of Suburban Jungle. A red argentina tegus, a predatory reptile that can grow four feet long lured many kids to the display tables of Suburban Jungle. I asked Lauren about their program partnership with Suburban Jungle and she explained, We were very grateful to be able to partner with Jeff from Suburban Jungle. He brought a wide variety of very interesting animals that were wonderful additions to our program, each with their own special story. As a reptile rescuer, he has seen the bad and the ugly but because of people like him, a few lucky ones get a second chance.” After watching the children interact with the native and exotic species, I concluded that the reptile roundup was a great introduction to the world of reptiles, even if a few species, such as the eye-catching tarantula, with “big hairy legs“ as one youngster exclaimed were neither a reptile or amphibian.

Shortly before I left, a young boy engaged me in conversation when I wandered to the presenter’s side of one of the tables. He shared with me, without me asking a thing, that he knows all about “frozen wooden frogs.” I smiled, for it’s a great story of adaption and survival, even if the frog in question is a Wood Frog, and not a wooden frog. Wood frogs are rather common, but seldom seen, amphibians of the woods and vernal woodland ponds of Oakland County. Wood frog freeze tolerance reaches an almost unbelievable level, for they accomplish feats that could almost be termed a biological miracle of nature’s way. Researchers have found that wood frogs spend much of the winter frozen! No respirations. No heartbeat. If someone happened to discover one under a thick carpet of leaves, deep under the snow, it would resemble a rock-hard sculpture shaped like a frog. That frozen feat is accomplished through a process still not fully understood, but to abbreviate the process, the wood frog’s liver creates glucose that enters every cell of the body and acts like an anti-freeze to prevent ice from forming inside the cells which would be lethal to the frog. Come spring, the frog slowly thaws from inside out, the heart begins to beat and soon it hops off to its vernal ponds to breed. The boy made it easier to understand with his explanation. “They turn into frogsicles in the winter, then real frogs in spring”. 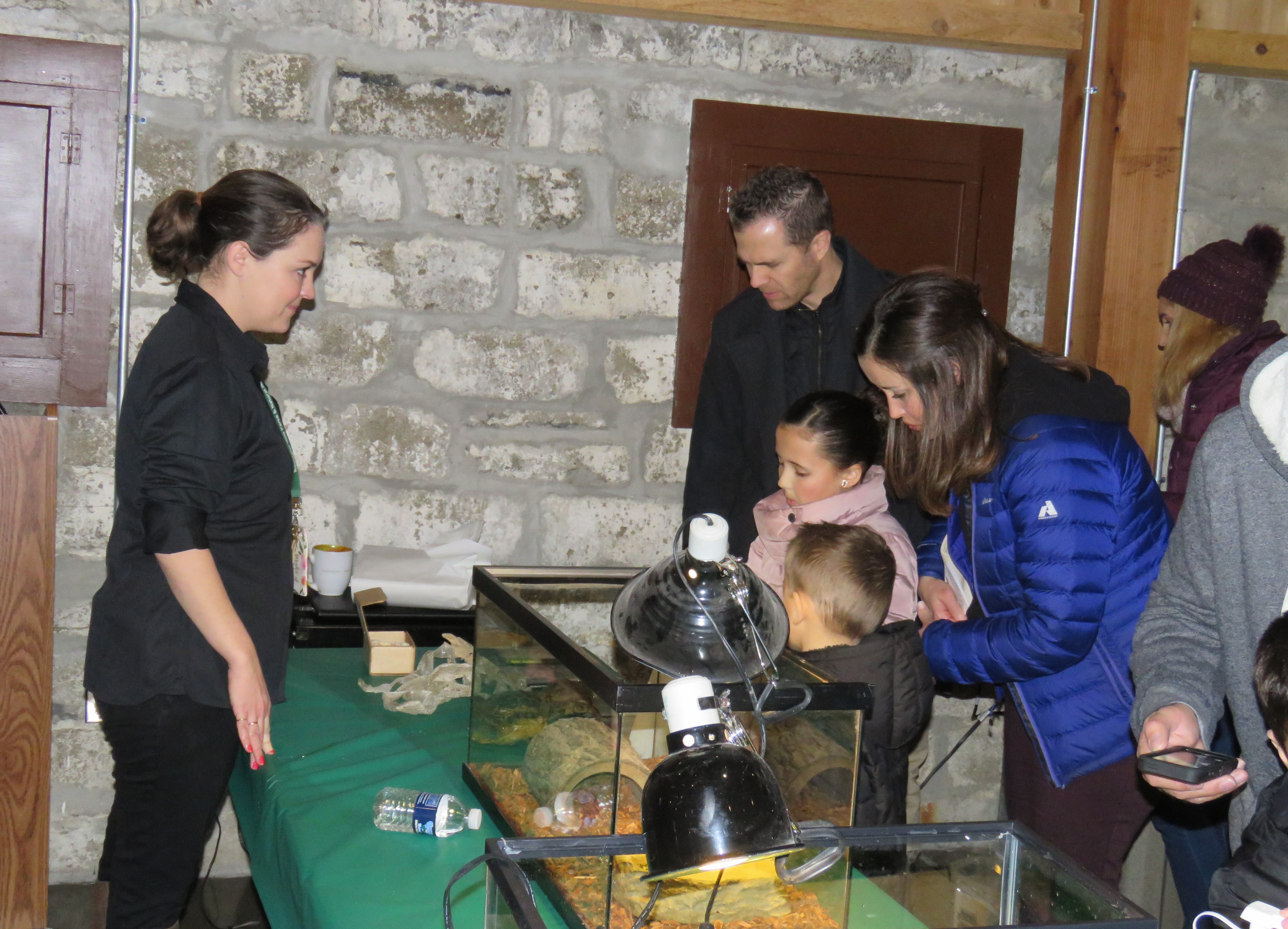 Reptile Roundup was more than a lively and educational setting to see creatures that cannot be released to the wild. For some of the children and adults in attendance, it was an eye-opening first introduction to the world of reptiles and amphibians. Perhaps the next time you walk through snowy woodlands or around the edge of a lake this winter, think about the reptiles and amphibians hidden beneath your feet, or deep underwater that have adapted to survive in the natural world in ways that would be impossible for humans. One fact is clear: We have much yet to discover about the phenomena of overwintering and the variety of amphibians and reptiles that thrive in secrecy on the wilder side of Oakland County. Visit the Rochester Hills Outdoor Engagement website to discover upcoming outdoor events.