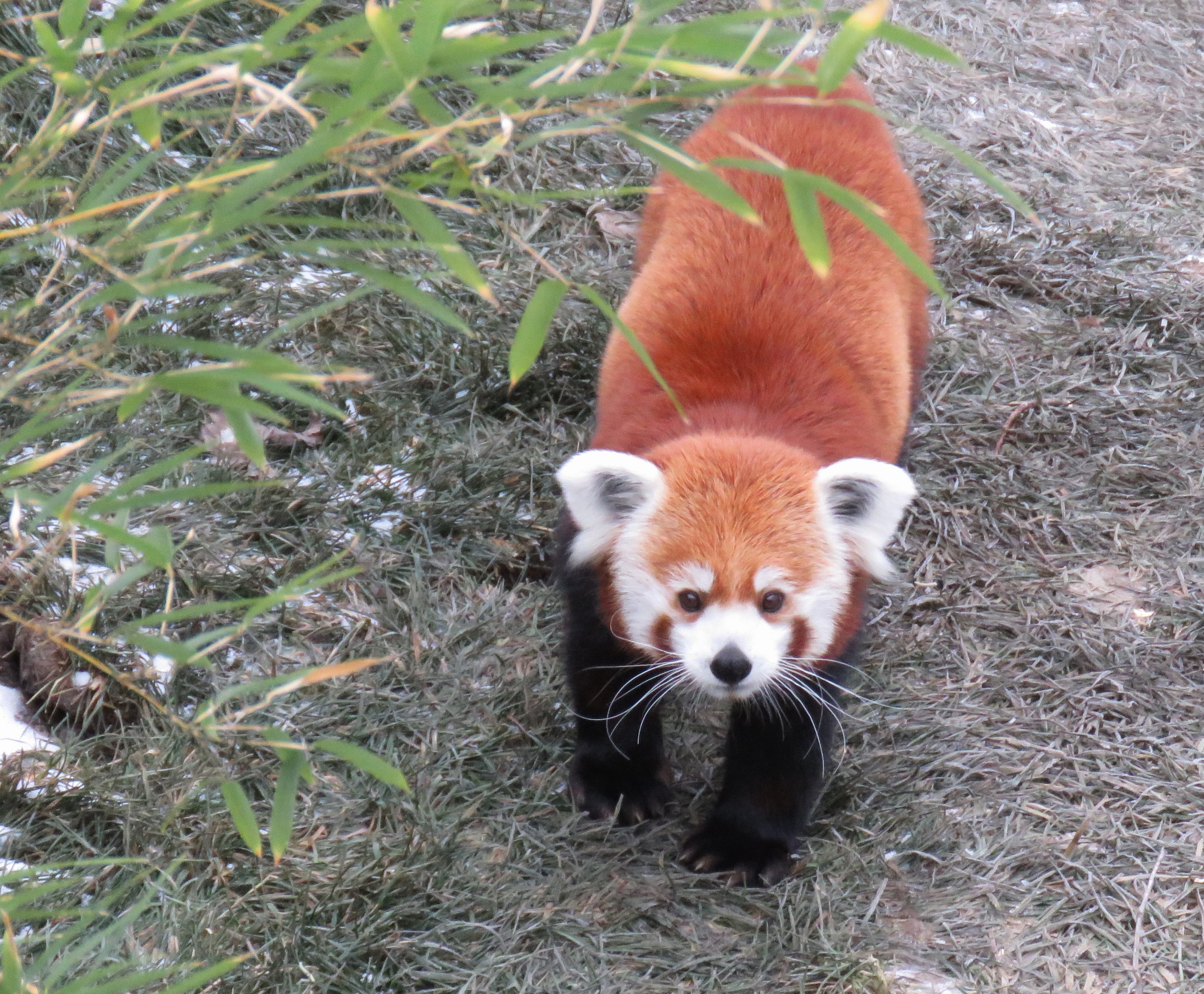 Monday morning was pure panda-monium at the Detroit Zoo. However, neither the heavily overcast sky, nor the frigid temperatures dampened the heartwarming enthusiasm as Detroit Zoo’s latest major habitat expansion, the Holtzman Wildlife Foundation Red Panda Forest, was unveiled to an excited gathering of media, honored guests, and students from Holy Redeemer Grade School in Detroit. They were all invited for an exclusive first tour of the newly renovated and expanded home for three charismatic creatures: two-year old Ravi, three-year old Ash and 13-year-old Ta-shi. The trio are Red Pandas, an endangered species with unforgettable and intensely cute faces, but sometimes the totally adorable factor is not enough to ensure survival.

Ron Kagan, executive director and CEO of the Detroit Zoological Society spoke at the dedication and thanked the Holtzman Wildlife Foundation for its support and said, “Their $500,000 gift has enabled us to improve the home for red pandas at the Detroit Zoo and significantly furthers our conservation education efforts for this endangered species and its wild habitat.” The mission of the Holtzman Wildlife Foundation (HWF), established in 2015, is to help small, grant-funded projects obtain the backing and exposure they need to improve outcomes for endangered species and to “reduce and reverse negative human impact on endangered wildlife by funding and supporting projects that create lasting change through education, advocacy and repopulation worldwide.” Jonathan Holtzman, founder of the HWF credits his childhood visit to the Detroit Zoo with influencing his lifelong passion for wildlife, noting, “Together we have the power to inspire people to make the world a better place for humans and for wildlife.”

Inspire was the perfect word for Holtzman to use, for inspiration, field research and work is necessary with as few as 10,000 red pandas – some researchers think the number is much lower – remaining in the wild. They live in the mountains of Nepal, central China and northern Myanmar in rainy, high-altitude temperate forests and tropical forests where they face continued threats from the clearing of forests for farming, logging and grazing, as well as captures for the pet trade. Red pandas have been hunted for their pelts and caught in snares and traps set out for wild pigs, deer, and takins, a hoofed mammal of the Himalayas that is sometimes referred to as a goat antelope, because it has features in common with both goats and antelopes.

Red pandas are not large; but they sure draw attention with their unforgettable faces and agile tree top movements. They are about the size of an overweight and very fluffy house cat and are dwarfed in size when compared to the much larger black-and-white giant panda that shares the panda name. The giant panda, however, belongs to the Family Ursidae, the same Scientific family as bears, while the red panda belongs to its own taxonomically unique Family, Ailuridae. The zoo’s interpretive signage and display panels within the new Holtzman Wildlife Foundation Red Panda Forest cleverly compared the sizes of the red panda and giant panda with two common Oakland County species, the red fox and the raccoon by using life-size standups to show the size differences. Another display compared the skulls, teeth and food preference of the four species, drawing more than a few comments of “I didn’t know that!” as members of the media and other guests wandered about. 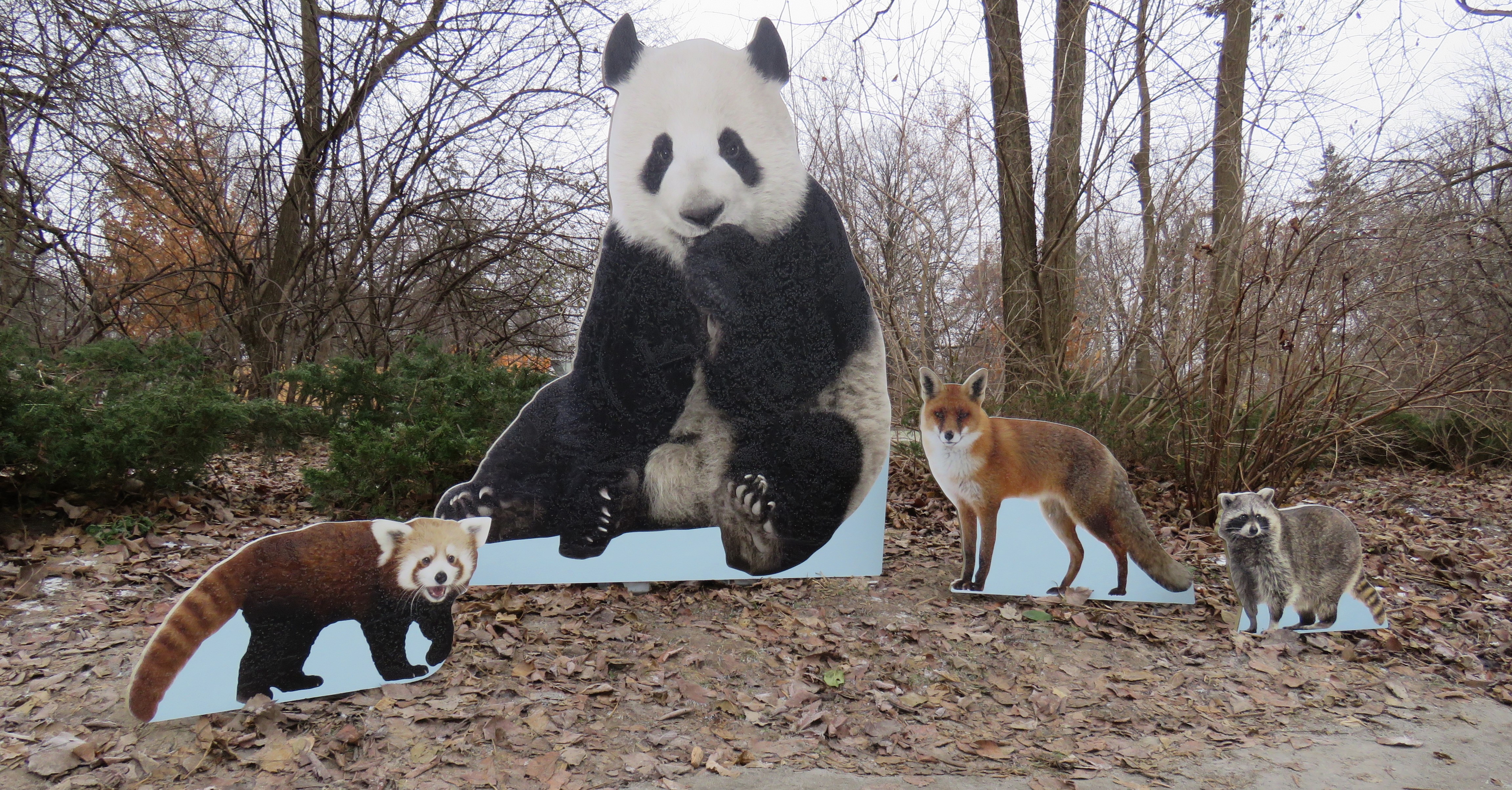 The habitat for the pandas has expanded to 14,000 square feet and now includes a larger and more complex arboreal pathway that provides sites for sunbathing, something red pandas like to do, as well as a flowing stream with a waterfall that sparkled with ice during the morning dedication. Misting areas will operate in the heat of the summer. The new indoor holding area has heated and cooled areas equipped with nest boxes, branches and other features to ensure the health and welfare of the pandas during the rare times they are not in their expanded and more naturalistic habitat. What really drew everyone’s attention, almost as much as seeing the pandas, was the new 80-foot long rope suspension bridge that extends through the trees and over the panda habitat. If day one of its opening was any hint, adventuresome zoo guests that want great views, and don’t mind a bit of swaying as they walk across the narrow bridge, are going to love this addition.

I thought it would be easy to capture panda images at the dedication. It was not. They sky was totally overcast and red pandas are one of the most skilled climbers in the animal world, using trees primarily for shelter, and to escape predators – and perhaps to frustrate photographers. After about twenty minutes of trying, I realized that the pandas do not always pose well for photographers. One in particular seemed to specialize in climbing between branches and going to the reverse side of the tree just as the camera focus seemed perfect. I did, however, make some observations and noted that the bushy tail was used partially for balance and it was obvious that the sizable claws were perfect for grasping onto limbs. Two words describe their tree movement ability: astonishing agility. They would descend trees effortlessly, going headfirst in an almost squirrel like fashion, a feat explained scientifically on the Smithsonian Zoo website, “Their ankles are extremely flexible, and the fibula and tibia are attached in such a way as to allow the fibula to rotate about its axis. These features make it possible for red pandas to adeptly climb headfirst down tree trunks.”

After all the school kids completed their crossing of the rope bridge, I headed onto the bridge and quickly confirmed it offered unparalleled views of the creatures in their stimulating naturalistic environment, including one of the three curled up in a ball, high up in an evergreen tree with its tail functioning as a high-quality wrap around blanket. In a word, it looked cozy – at least for a panda. The sway created by a cameraman from network television walking behind me on the bridge added to my challenge of panda photography. And then, just as he stopped walking for a moment, another panda stared up at me from the ground just long enough for a perfect photo before returning to its bamboo lunch.

Red pandas have a taste for bamboo shoots and bamboo leaf tips, stripping them off the stems with their mouths, an act I was lucky to witness when one perched on his, or was it her, haunches and snacked. A zoo employee shared with me the intriguing fact that pandas have an extended wrist bone that acts in many ways like a thumb and allows it to more easily grasp onto bamboo. She also reminded me they are omnivores and in addition to foraging for roots, fallen fruits, acorns and mushrooms they will eat birds, insects, eggs and small mammals.

Although my visit only lasted a few hours, it’s obvious the Detroit Zoo red pandas serve as excellent ambassadors for their species. Hopefully the well-designed public education aspects of their habitat will motivate zoo guests to protect endangered species and habitat necessary for their survival in the wild. I look forward to a return visit to this very special “wilder side” of Oakland County to view the cinnamon color of the panda’s fur on a blue sky winter’s day when the snow is deep and the sun shines. 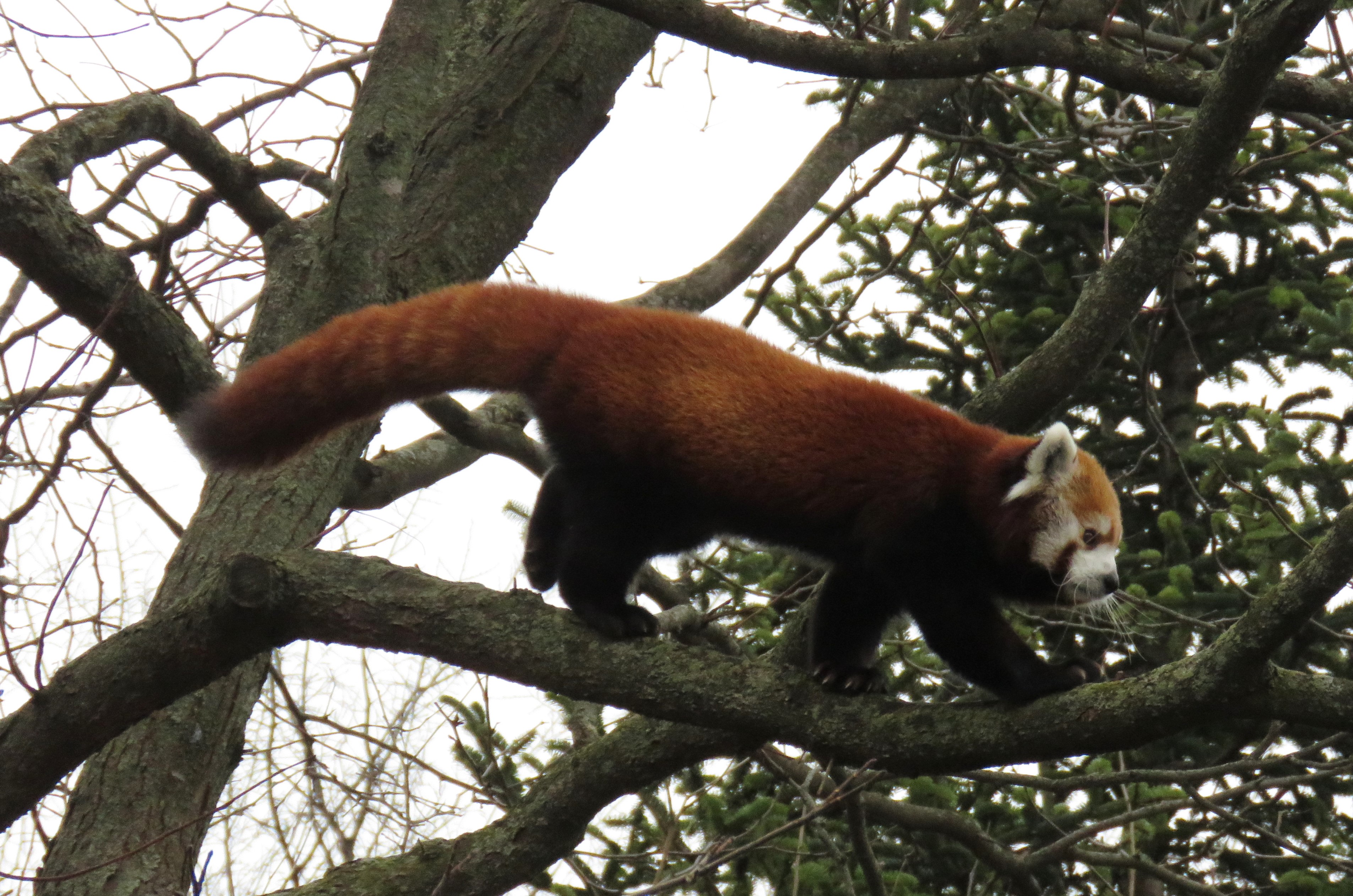 The Detroit Zoological Society – a renowned leader in humane education, wildlife conservation, animal welfare and environmental sustainability – operates the Detroit Zoo (located in Oakland County) and the Belle Isle Nature Center in the City of Detroit. For hours, prices, special events and other information, visit the Detroit Zoo website.