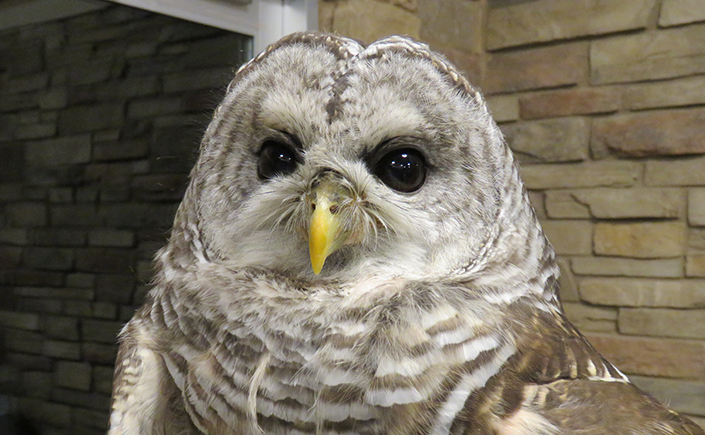 The first snows of the season came early this year, adding majestic beauty to the woods of Oakland County. Walk quietly in woodlands at dusk and the rhythmic music of our “eight hooter,” the Barred Owl, may enliven your journey into nature’s way with its unique musical repertoire. It’s perhaps best described as mournful, rather rhythmic eight-hoot baritone melody of “Who cooks for you? Who cooks for y’all?” Sharp listeners will note the distinctive ending, a drawled-out note that is sometimes described as a southern twang. I am lucky, for every now and then I hear and see Barred Owls just a few hundred yards from my house. However, on Tuesday evening I had the pleasure of going eye to eye with a Barred Owl, and other species of raptors, from within the comfort of the Marshbank Lodge, a beautiful facility of West Bloomfield Parks located within Marshbank Park, an easy to access 108-acre park in a suburban neighborhood of the Wilder Side of Oakland County. 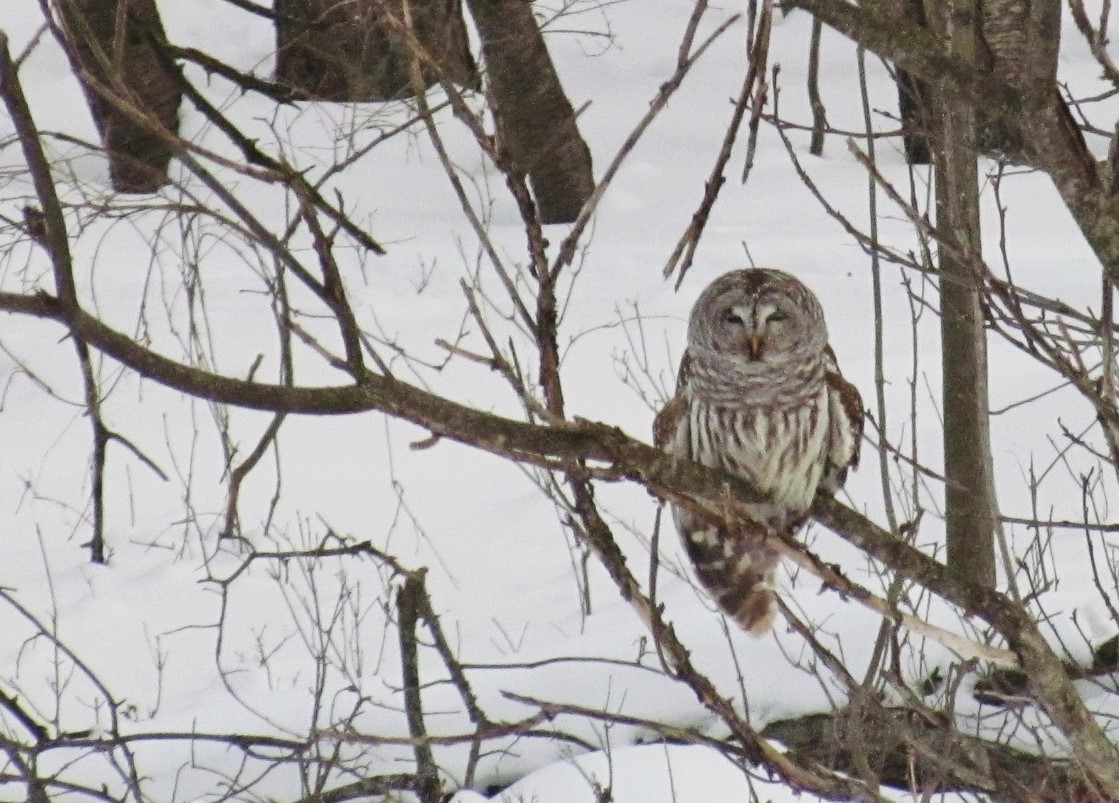 The birds of prey were part of a special family program geared for young children presented by the Wildlife Recovery Association as a nature education event for West Bloomfield Parks. The Wildlife Recovery Association holds the required Federal and State permits to provide rehabilitation services to injured and orphaned hawks, owls, eagles, and falcons and they sometimes work with law enforcement agencies in the rescue of birds of prey that have been injured. Their website states, “Wildlife Recovery Association is a non-profit, charitable, tax exempt, 501(c)3 organization, and was incorporated in 1979. Our purpose is to promote the understanding, appreciation, and protection of wild hawks, owls, eagles, and falcon, and their connection with all of nature.” 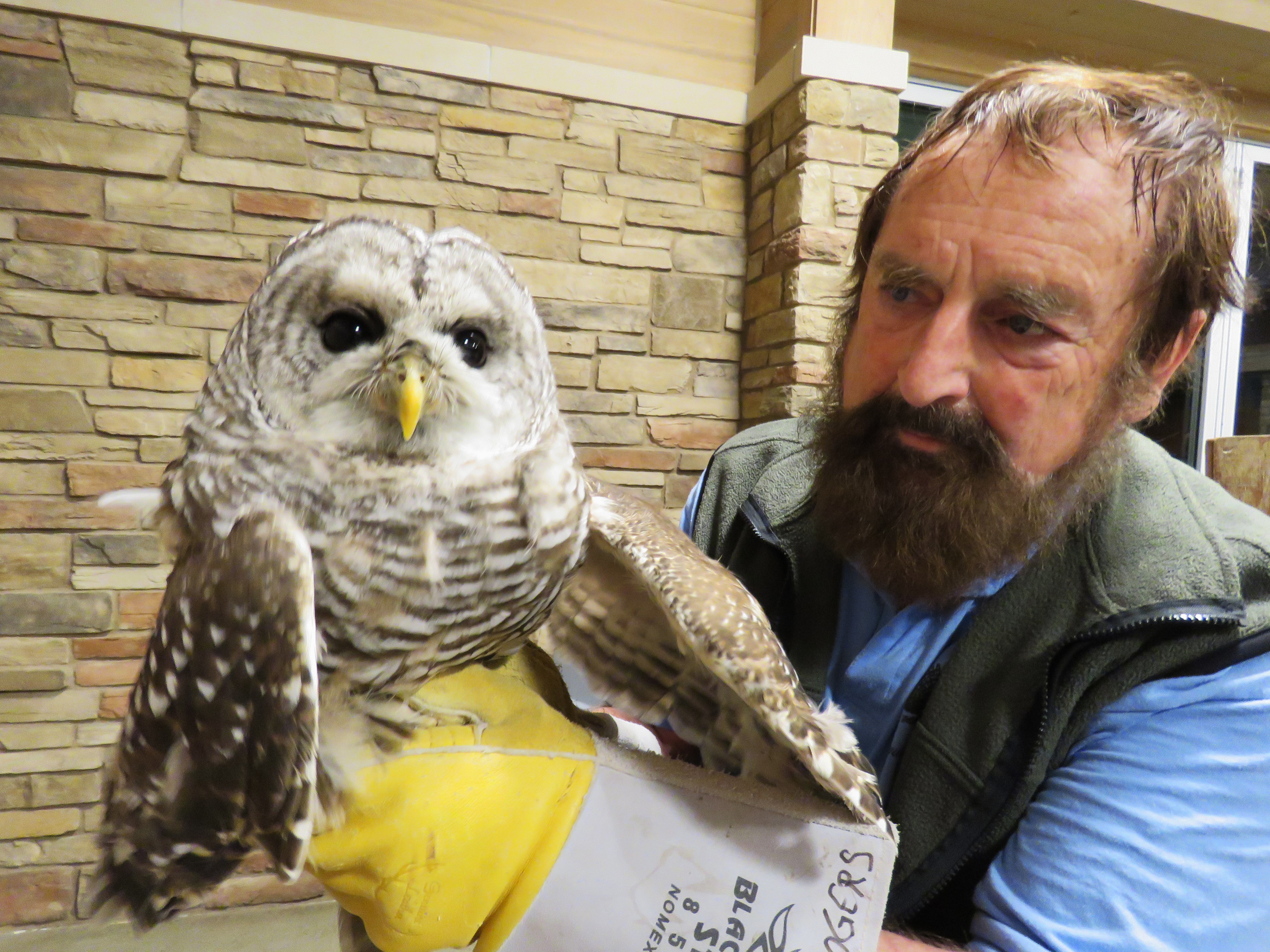 The excitement of the young nature lovers, and a few unaccompanied adults, was palpable as they came into the room with their attention fixated on Joe Rogers as he walked about the room with various raptors before the program officially began. Other eyes stared at the large transport boxes that held different species of raptors that would soon get individual attention. Curious young minds, and mine too, wondered what was in each transport box. The first species to make the rounds was a pair of Eastern Screech-Owls, a very common Oakland County owl that is far more often heard than seen, but well-known by naturalists and birders by its whinnying song and occasional “screeches.” They nest in tree cavities and will often take up residence in nesting boxes, especially those designed for wood ducks. Rogers shared information on their two color phases, the more common gray phase and the red phase, both of which are found in the county. One excited little voice near me screeched, “They eat mice!” and he was right.

The extremely small, gnome like Saw-whet Owl mesmerized the gathering with a few of the children wondering if it was real, as the live owl was brought around for close inspection in a cleverly designed portable habitat. The saw-whet gained its name for its peculiar (to human ears) call that sounds a bit like a saw being sharpened by a whetstone. In the early days of logging in Michigan, loggers would sharpen their saws while sitting around campfires and these very tiny owls would fly in to search for the “other owls” when they heard the noise of the whetstone rubbing on the saw.

A sleek Peregrine Falcon with its dark penetrating eyes drew oohs and ahhs from the gathering. One of the world’s fastest birds, the Peregrine can approach 200 miles per hour when it dives from a cliff to intercept airborne pray. Peregrine became endangered in the mid-20th century because of pesticides, especially DDT. But now, according to the Michigan Department of Natural Resources, the population has climbed from near extinction to 15 nesting pairs in southeast Michigan alone. Most of those nests are found on tall city buildings, including within Detroit, for the peregrine is very much at home nesting on steep cliffs or tall buildings.

The mighty Great Horned Owl, sometimes referred to as a hoot owl, is the largest owl of our county and a super opportunist hunter. The staff went on to explain to the young children that the owl does not have horns, but tufts of feathers that can stand up at times, creating a horn-like image for active minds. They emphasized that this owl is found in all types of habitat across North America and preys mostly on small mammals including rabbits, mice, squirrels and even skunks. They, like other owls, have extremely good hearing and vision in low light conditions. The staff from the Wildlife Recovery Association brought along talons from a Great Horned Owl and the claw of black bear to emphasize the extremely large size and power of its talons, in many ways an oversized flying mouse trap from which there is no escape.

A very dark-colored Rough-legged Hawk looked at the gathering almost as if to wonder if any mice or rabbits might be roaming as it perched on Joe Rogers’ gloved hand. A Merlin appeared next, a member of the falcon family. The Cornell Lab of Ornithology has a great description of Merlins, a species that passes through Oakland County during migration.

“Merlins are small, fierce falcons that use surprise attacks to bring down small songbirds and shorebirds. They are powerful fliers, but you can tell them from larger falcons by their rapid wingbeats and overall dark tones. Medieval falconers called them “lady hawks,” and noblewomen used them to hunt Sky Larks. Merlin populations have largely recovered from twentieth-century declines, thanks to a ban on the pesticide DDT and their ability to adapt to life around towns and cities.”

I stayed for a while as the lively program wrapped up to watch the kids work on owl related craft projects and chat with participants about the raptors living in our midst, all of which are fully protected by State and Federal Law. I was asked what my favorite owl was and confessed that naturalists should never have favorites when it comes to creatures of the wild, for all creatures play a role in nature’s way. But, when it comes to owls, I do have a favorite: the Barred Owl. Perhaps that’s because it’s the owl I hear and see the most, and sometimes am able to photograph, in my small corner on the northern fringe of the Wilder Side of Oakland County.

FYI: West Bloomfield Parks manages 12 parks and facilities within Oakland County and offers a wide variety of special nature events and workshops, all of which are listed on their website. For general information on their park system visit: http://www.wbparks.org. Their current brochure can be found at www.wbparks.org/brochure; look for a new brochure to come out on December 3rd. West Bloomfield usually hosts one live animal educational program each season, with pre-registration required.