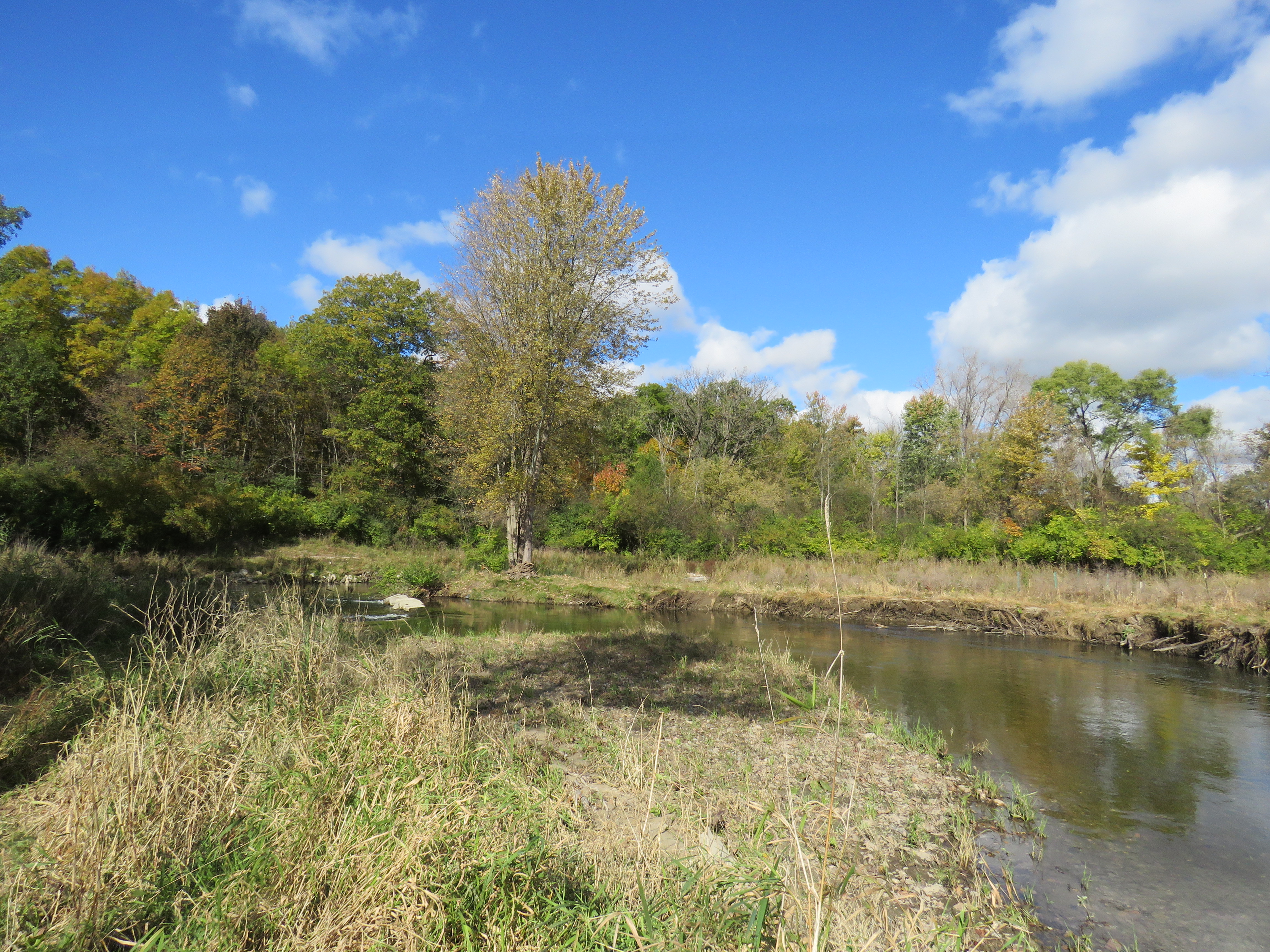 The Ice Age was coming to an end. Shuffling its 8-ton frame, a shaggy mastodon crossed a steep moraine and lumbered down to the edge of a bend in the icy rock-strewn river. That mighty herbivore, soon to be extinct, browsed on perhaps forty or fifty pounds of riverside shrubs and then wandered into the darkness of a changing world, along what is now the Riverside Trail. 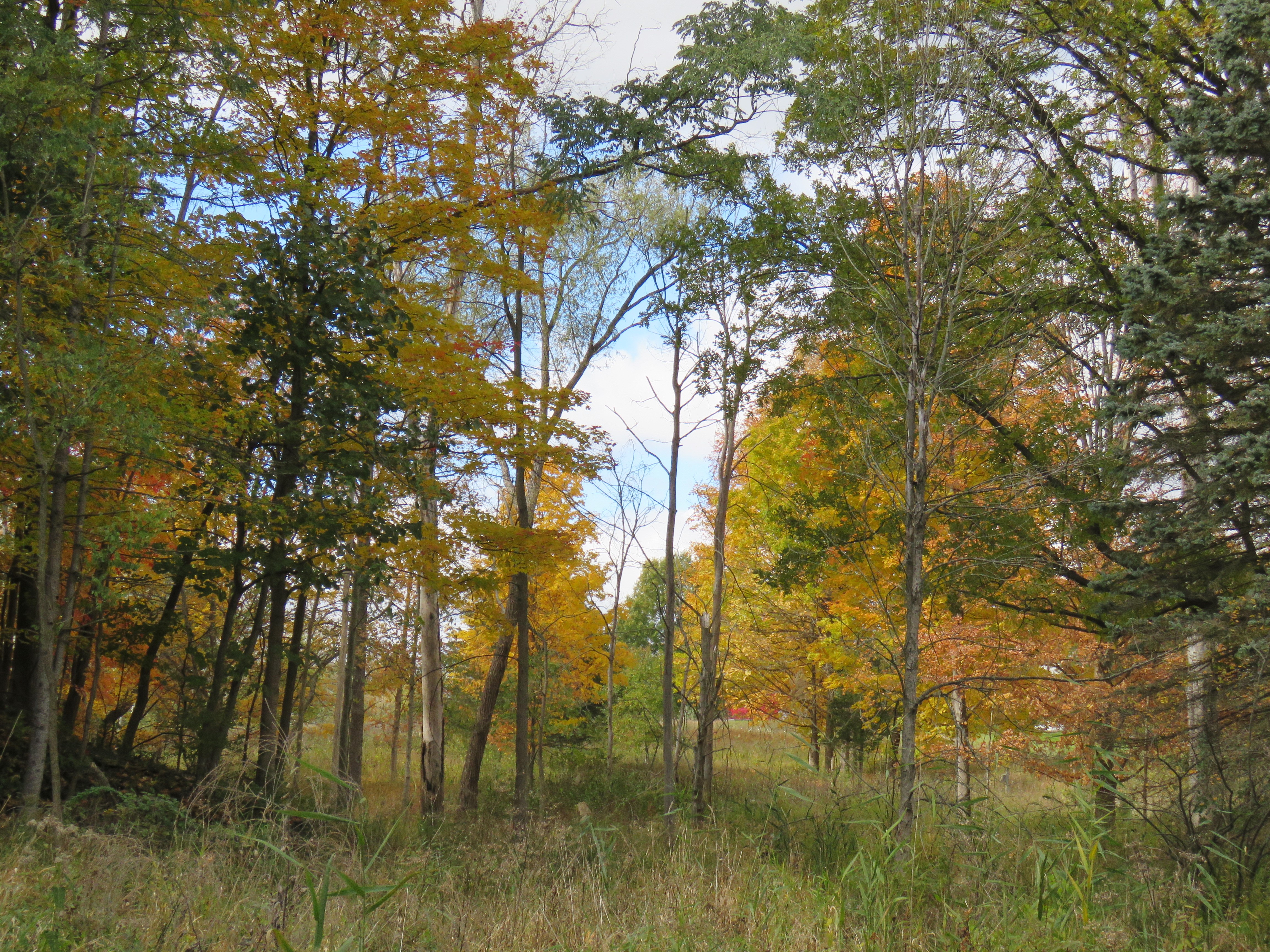 Fast forward to the last week of October 2018. Autumn in Oakland County had reached its full glory, and I was setting out on the Riverside Trail that’s part of the Avon Nature Study Area in the City of Rochester Hills. Within minutes of my arrival, I noted fresh raccoon tracks in mud, a flash of silvery movement in a bend of the Clinton River and evidence of beaver activity. The river sparkled under a clear blue sky. It was a great day. Perhaps consider replicating my journey for a quick immersion into nature’s way before the snows and strong winds of November arrive. 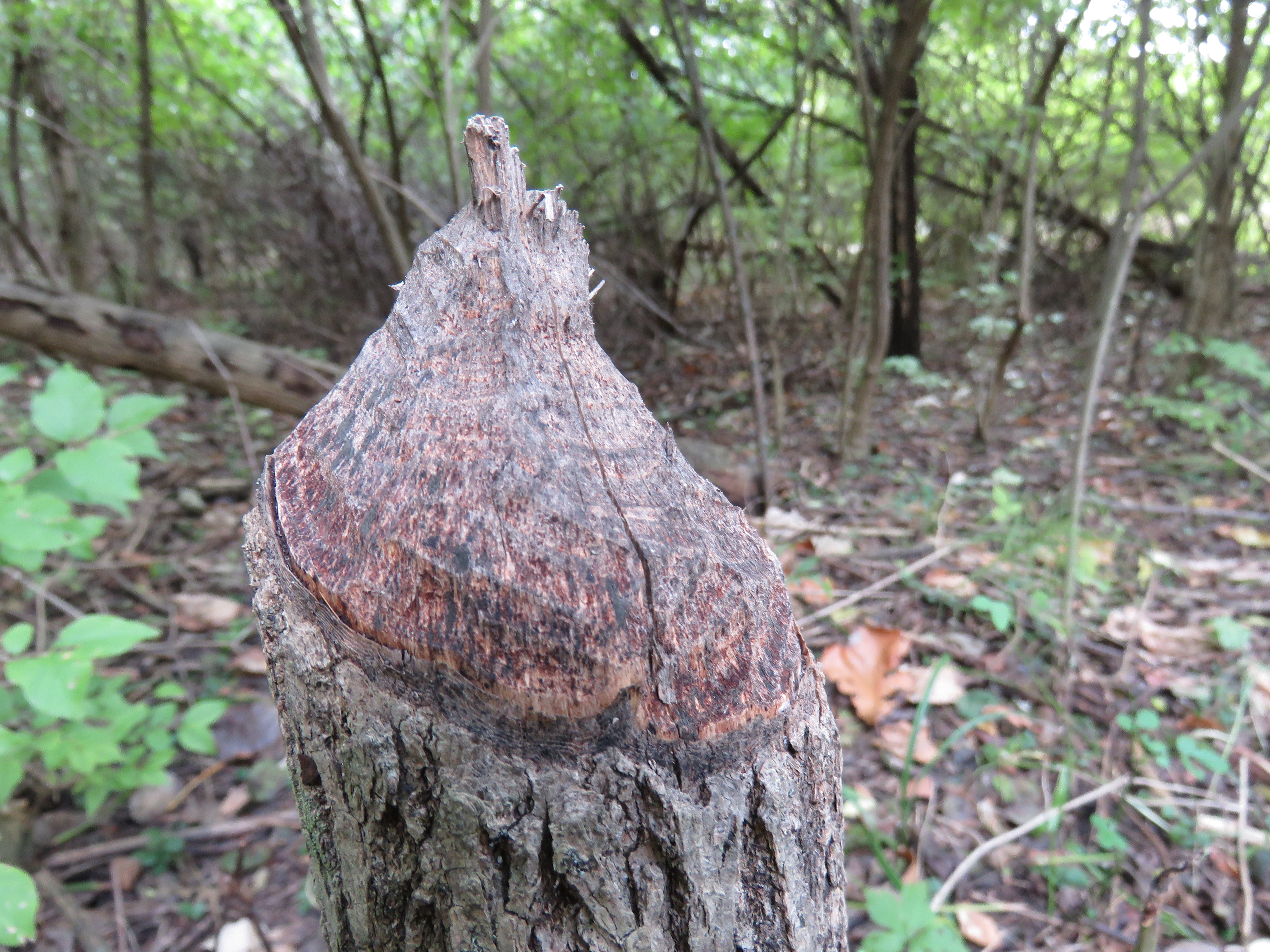 The 102.5-acre conservation area is an easy-to-access respite from the hustle and bustle of life in the city and a great way to start a new day, or take an outdoor lunch break. There are even old picnic tables along the mostly wooded trail system. I started my exploration near the east end, accessing it from the parking lot of the Clinton River Watershed Council headquarters located at 1115 W. Avon Road. However, my slow-paced exploration quickly revealed that most folks seem to access from the west end: the Rochester Hills City Hall visitors’ parking lot at 1000 Rochester Hills Drive. Regardless of where you start, it’s a pleasurable trek through this protected conservation area, but first a few comments on mastodons.

The mastodons that once roamed our county are long gone, but as I bushwhacked up the side of a moraine to walk under a cascade of falling leaves before following the official trail system, I thought to myself that this kind of landscape might have been one of last strongholds for the mastodons that roamed what is now Oakland County, a species honored as being the State Fossil of Michigan. Perhaps one day, the erosive power of the Clinton River will expose more mastodon bones from that era. 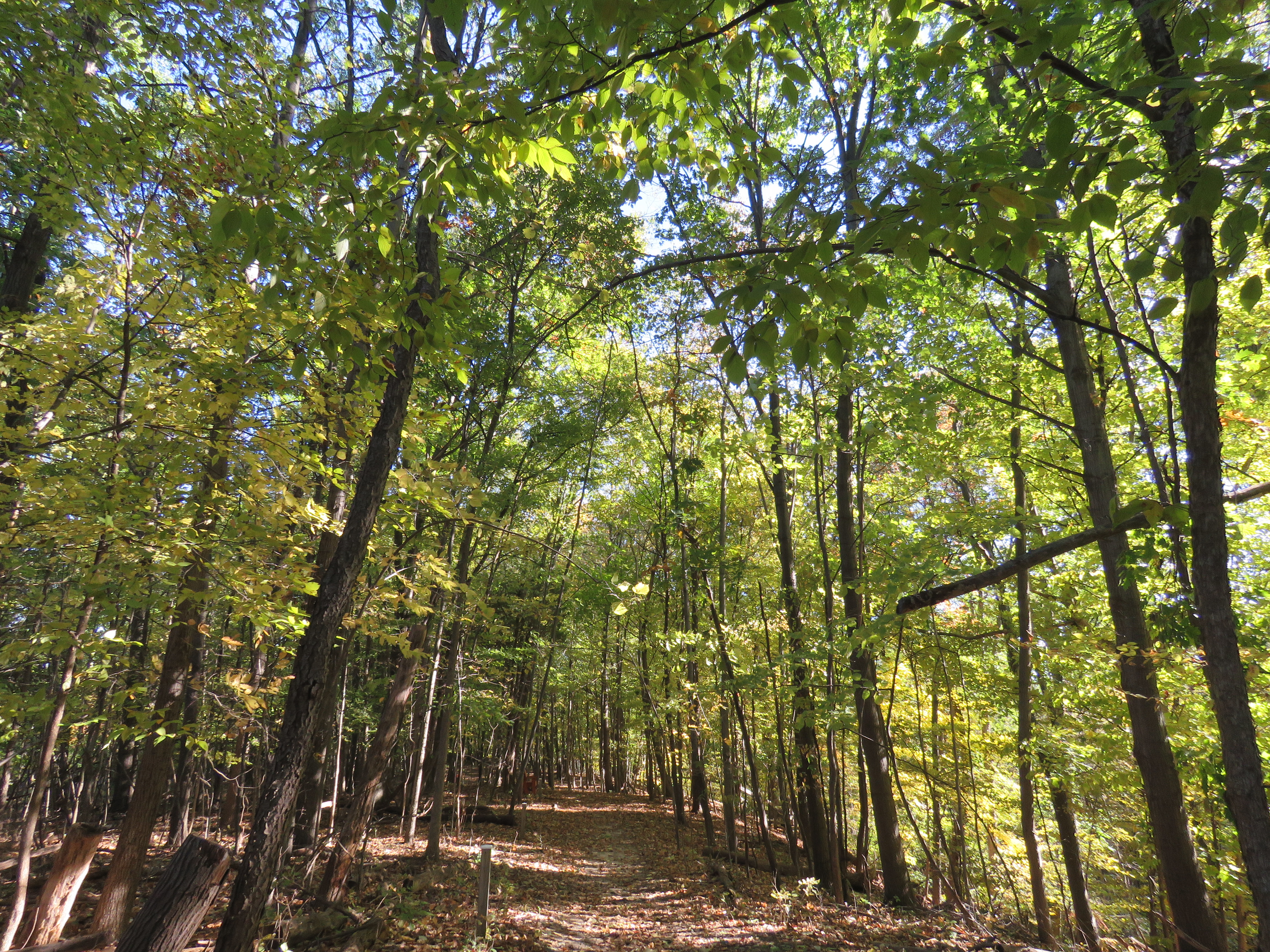 There is no need to worry about a lack of trail signage, but after my hike I contacted Rochester Hills Parks Manager Alan Buckenmeyer to find out why some signposts had the letter D, others had R and yet others an H. He shared good news with me, “The D is Deer Trail, R is Riverside Trail and H is Highlands Trail. We are in the process of updating our brochures and the new one for this area will include the improvements along Avon Creek and the trails that we will be adding now that the river bank has been stabilized.” I suggest hiking now while autumn still sparkles. Don’t worry about following a trail without signs, for it would take herculean efforts to get lost. In the meantime, we can look forward to the new brochures and new riverside trails. Although the trail system has a few steep elevation changes, it’s certainly navigable in street shoes and the entire length, including a few spur trails that lead to the banks of the river, is under two miles. Dogs and bicycles are not permitted; it’s a foot traffic only trek. 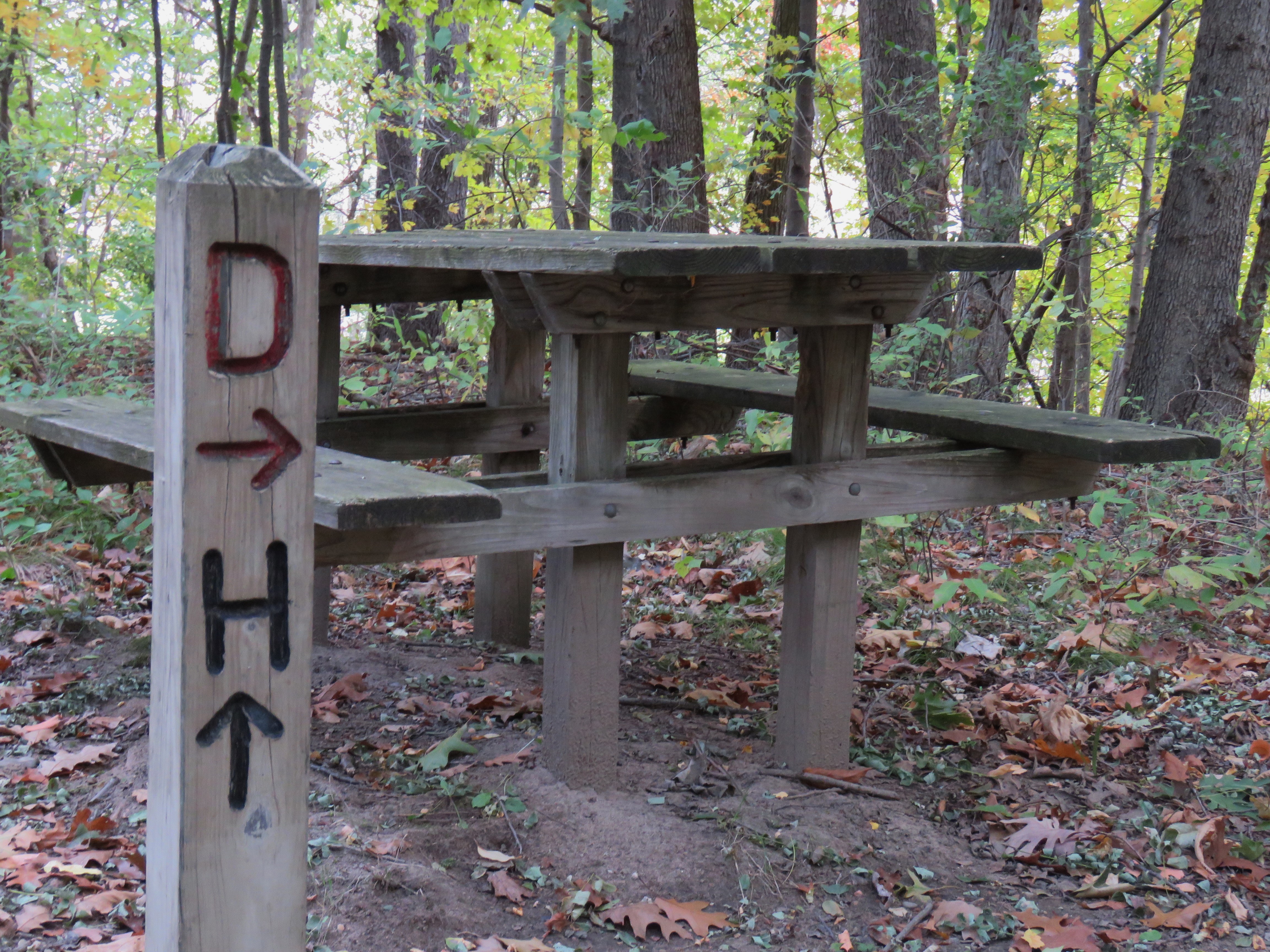 Within minutes of crossing a small boardwalk and heading uphill, I noted fresh buck rubs on young trees: bark scraped off by a buck’s antlers that proclaim boldly, “This is my turf,” an annual territorial ritual during the breeding season as testosterone levels soar. The nearly flat top of the moraine provided great views and so I followed that route toward City Hall. My hike was very close to the lunch hour and I noted that some trail wanderers just relaxed on the benches to enjoy a sandwich in solitude or paused at the ravine overlook. I paused at the overlook too and listened to woodpeckers drilling for meaty morsels on a dead tree while taking note of black-capped chickadees that flitted about the hillside and squirrels scurrying about in their nut gathering mode. With leaves falling from the maples and black cherry trees (oaks hold their leaves longer), this first week of November is a grand time to walk slowly, stop often and “read” the forested landscape and watch for wildlife activity, especially in these golden days of autumn as sunlight flickers through the once thick tree canopy.

After reaching the edge of City Hall, I departed the wooded moraine and descended a hill-hugging wooden staircase that leads down to the gentle meanders of Avon Creek and a small pond, an entirely different natural community of trees, shrubs and planted wildflowers. The natural appearing pond and dam were constructed when the City Hall site was developed in the late 70s – early 80s. I’m pretty certain that come next spring, dragonflies, red-winged blackbirds, great blue herons, and perhaps tree swallows and kingfishers will visit the pond and wetlands along the creek as part of their daily routine of hunting for meals above, and in some cases, below the water.

The waterfall was a great place to listen to the natural sounds of autumn and so I did. From there, I continued along the edge of the trail that parallels Avon Creek, taking note of clusters of now dry wild bergamot, a member of the mint family also commonly known as bee balm. In summer, bergamot is easily identified by its showy, nectar-rich lavender colored flowers that attract butterflies and hummingbirds. Even now, their dry flower heads hold a strong aromatic scent.

One of the more intriguing features along the entire meandering trail system is a small outdoor education area that includes benches, a chalkboard and an elevated presentation platform. I chatted with other hikers there, hikers that perhaps should be more aptly called lunch hour meanderers, and was pleased to see they shared my enthusiasm for this treasure of protected land on the wilder side of Oakland County, a habitat that in all likelihood was once home to mastodons. 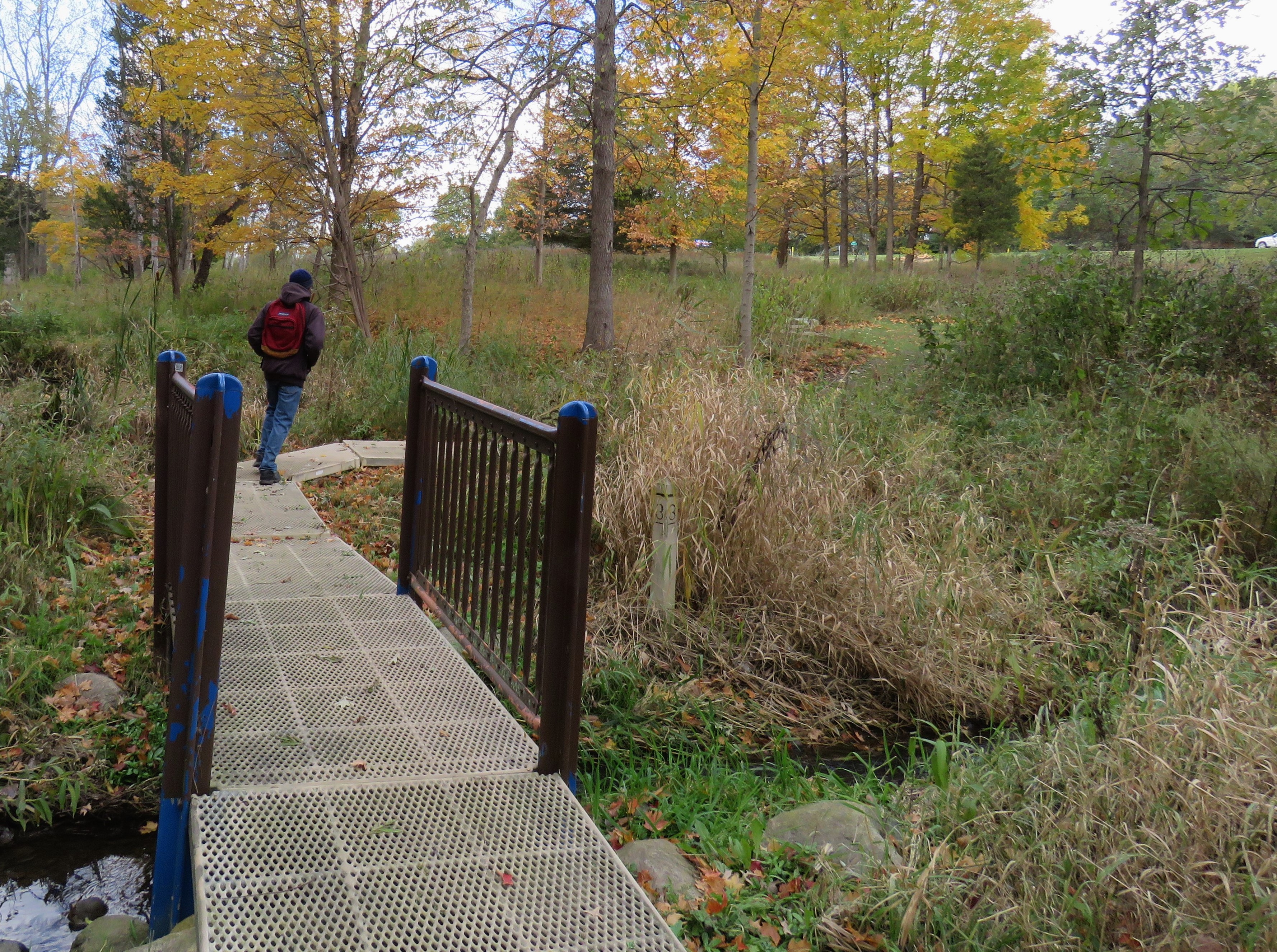