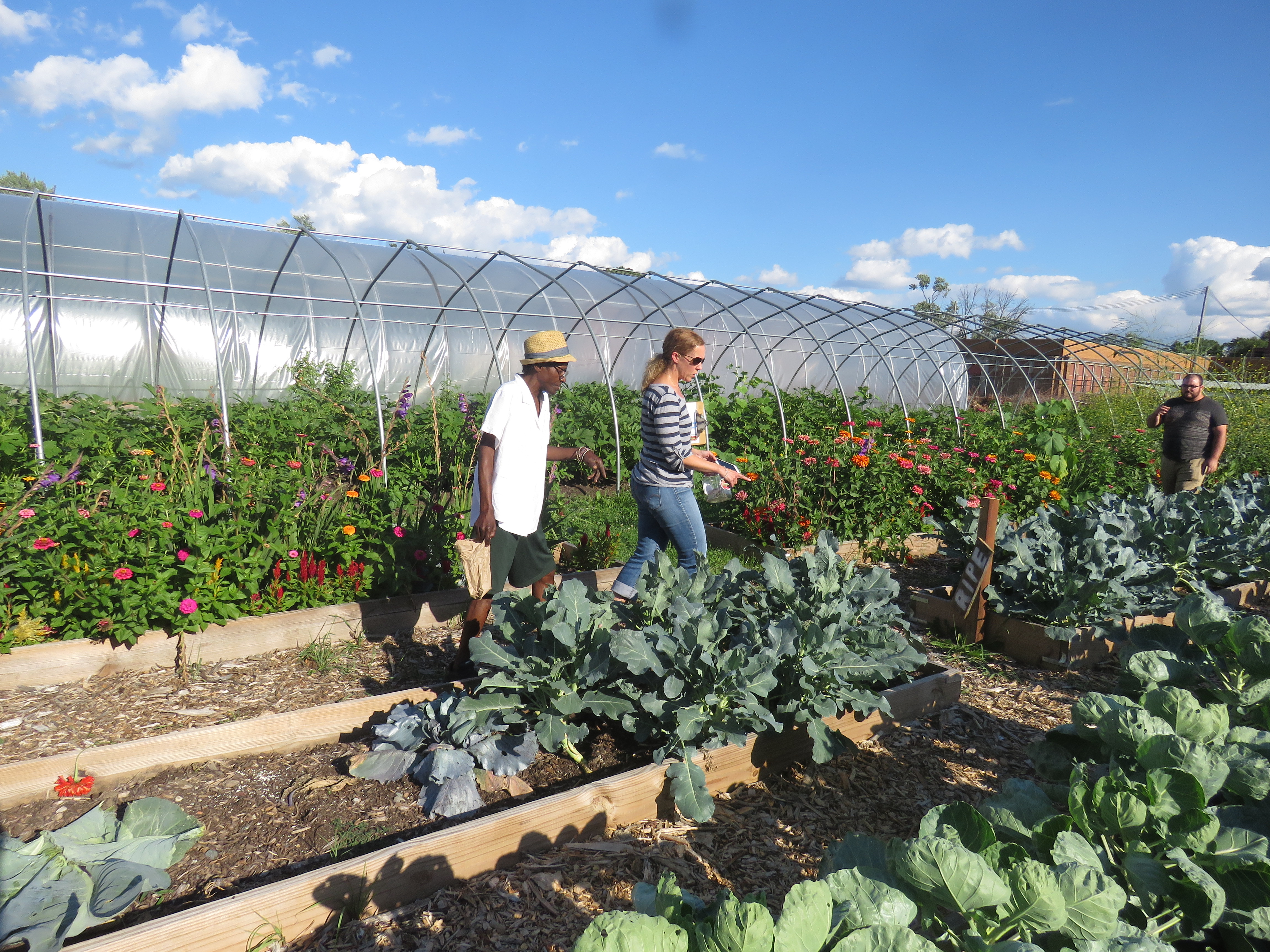 John Muir once said, “In every walk with nature one receives far more than he seeks.” His words often come to mind on my meandering adventures in our wildlands, however I did not expect them to spring to life most delightfully in highly urbanized Pontiac. But they did in the early evening of August 22nd. It all started after reading about an upcoming event in Pontiac with a catchy title that perked my interest: Herb Walk: What’s that weed?

I was not sure what to expect so I dug a bit deeper and found more information on the Facebook site of Growing Pontiac that included this, “Have you ever wondered what that pesky weed was in your yard? Why does it keep coming back even after you pull the root out? Join us in the field at the old Webster Elementary School for a wild plant walk where you’ll be introduced to the plants and herbs that are growing all around you. You will learn to identify our local plants and hear how they can be used in everyday life!” 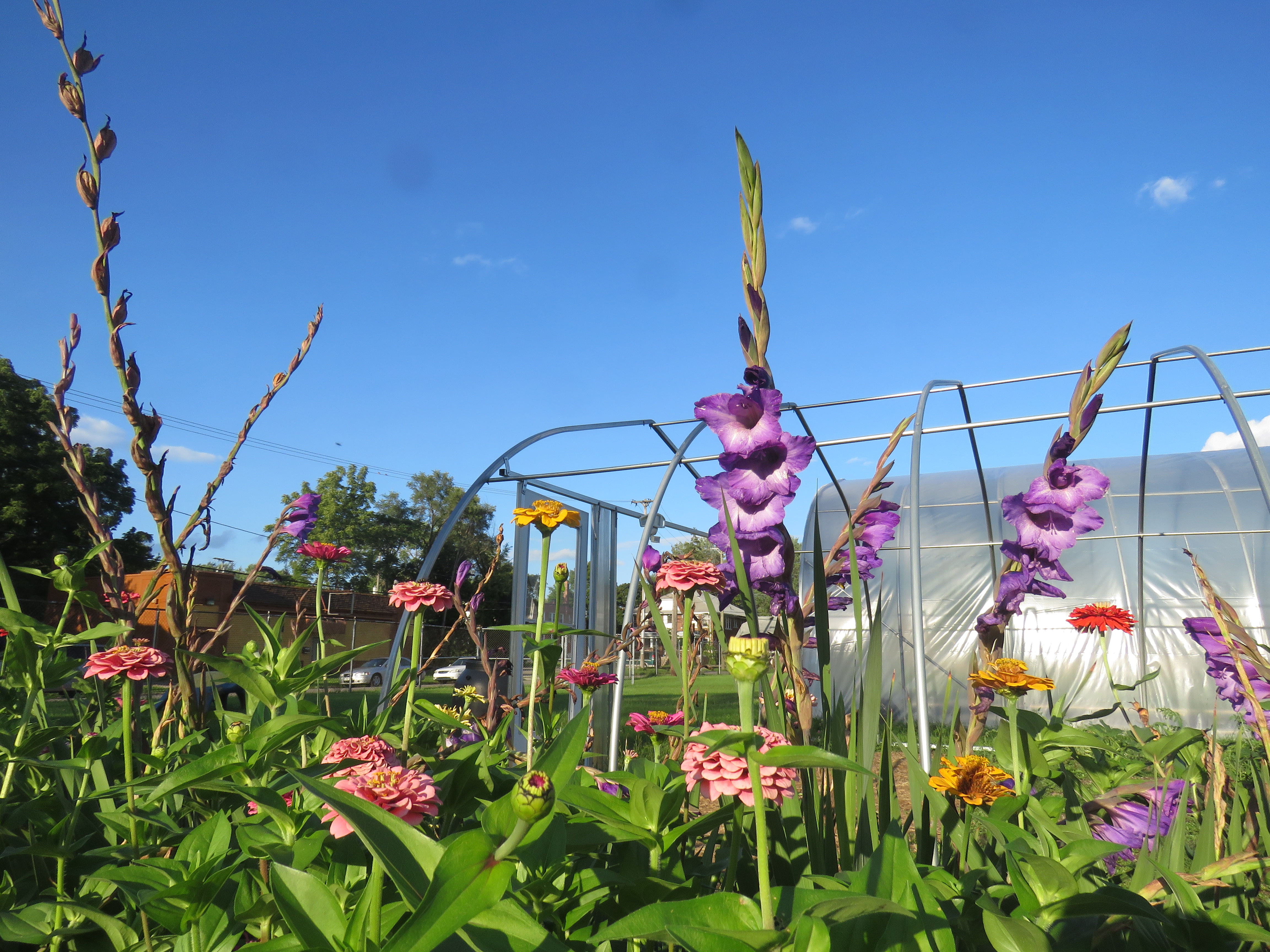 My interest was stirred even more by an initially puzzling, short paragraph from the Micah 6 Community, one of the events cosponsors, “When we moved into our neighborhood we realized our neighbors have several barriers to healthy living including low access to reliable transportation, high rates of disability and a grocery store that was over a mile away. We went to the Oakland County Treasurer’s Office and asked, ‘How much for one of these vacant lots around our neighborhood?’ “How about $10?” they replied. So, we bought a bunch of them and started working.” It was those words that sealed the deal for me to head to Pontiac, not my usual destination for embracing nature’s way, but I’ve been around long enough to know that being willfully ignorant of good community secrets helps no one. 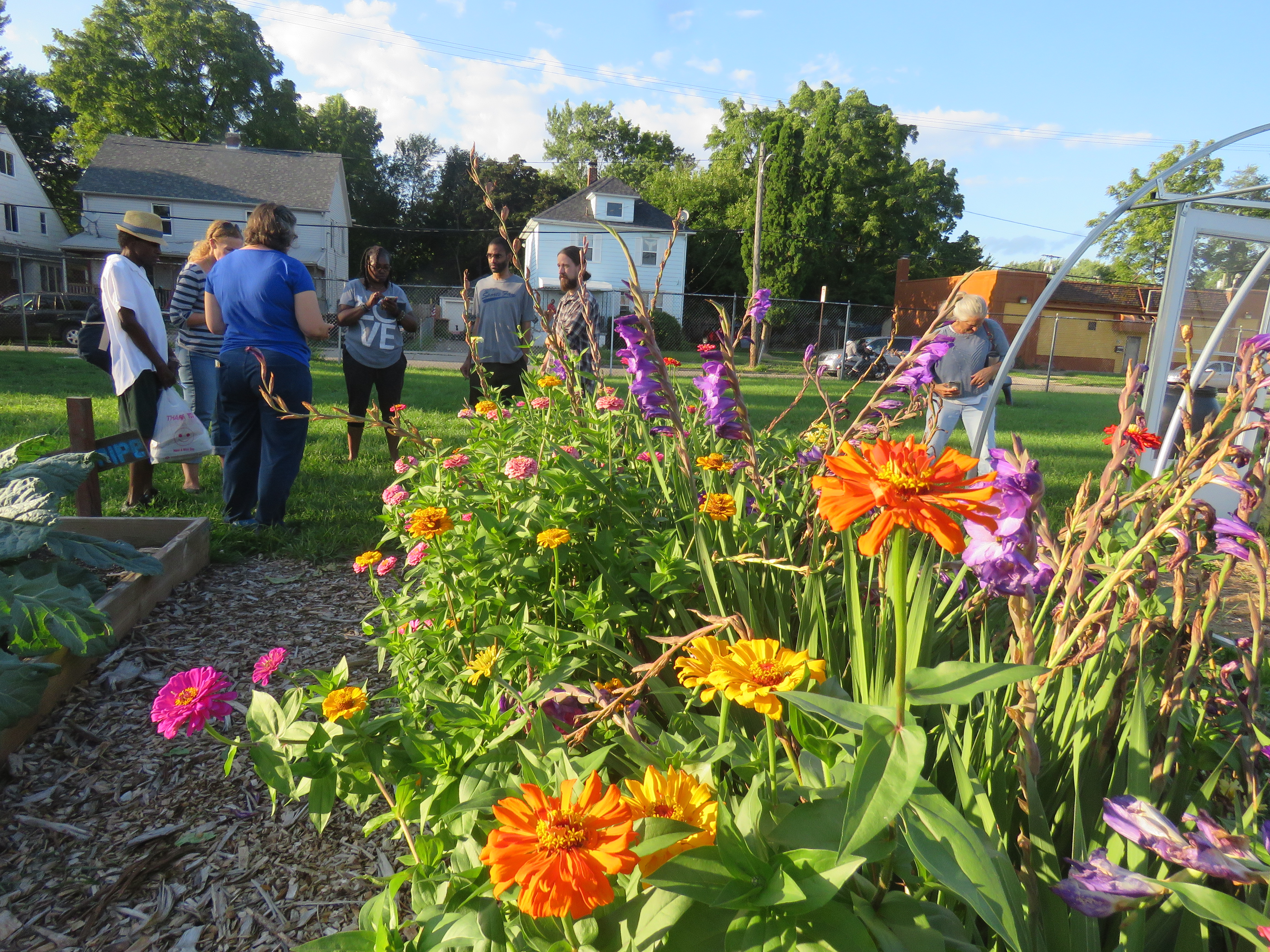 The Herb Walk was hosted by Growing Pontiac, “a coalition that strengthens the local food system in the city of Pontiac and surrounding neighborhoods” along with the Oakland Hills Community Garden, a Lake Orion based “community garden dedicated to feeding the hungry,” and the Micah 6 Community, “a community development, neighbored stabilization, and charity organization” that helps to “build the neighborhoods that Pontiac deserves.” It was the Micah 6 Community that purchased Webster Elementary after it sat vacant for 10 years. It’s now the hub for their future work in the neighborhood.

I arrived a half hour before the program’s start time and cruised around the city block twice that included Webster Elementary on the north side of busy M-59 before I found a place to park across the street from the Monroe Manor apartments. I walked in through a large gap in the old fence and was greeted by Jill Robinson, the Property Specialist for the Oakland County Treasurer’s Office and part of the leadership team for Growing Pontiac. Before she could say more than a few sentences, I was staring in awe at the colorful array of flowers and healthy looking vegetables that drew the attention of the human eye and a wide array of pollinating insects. 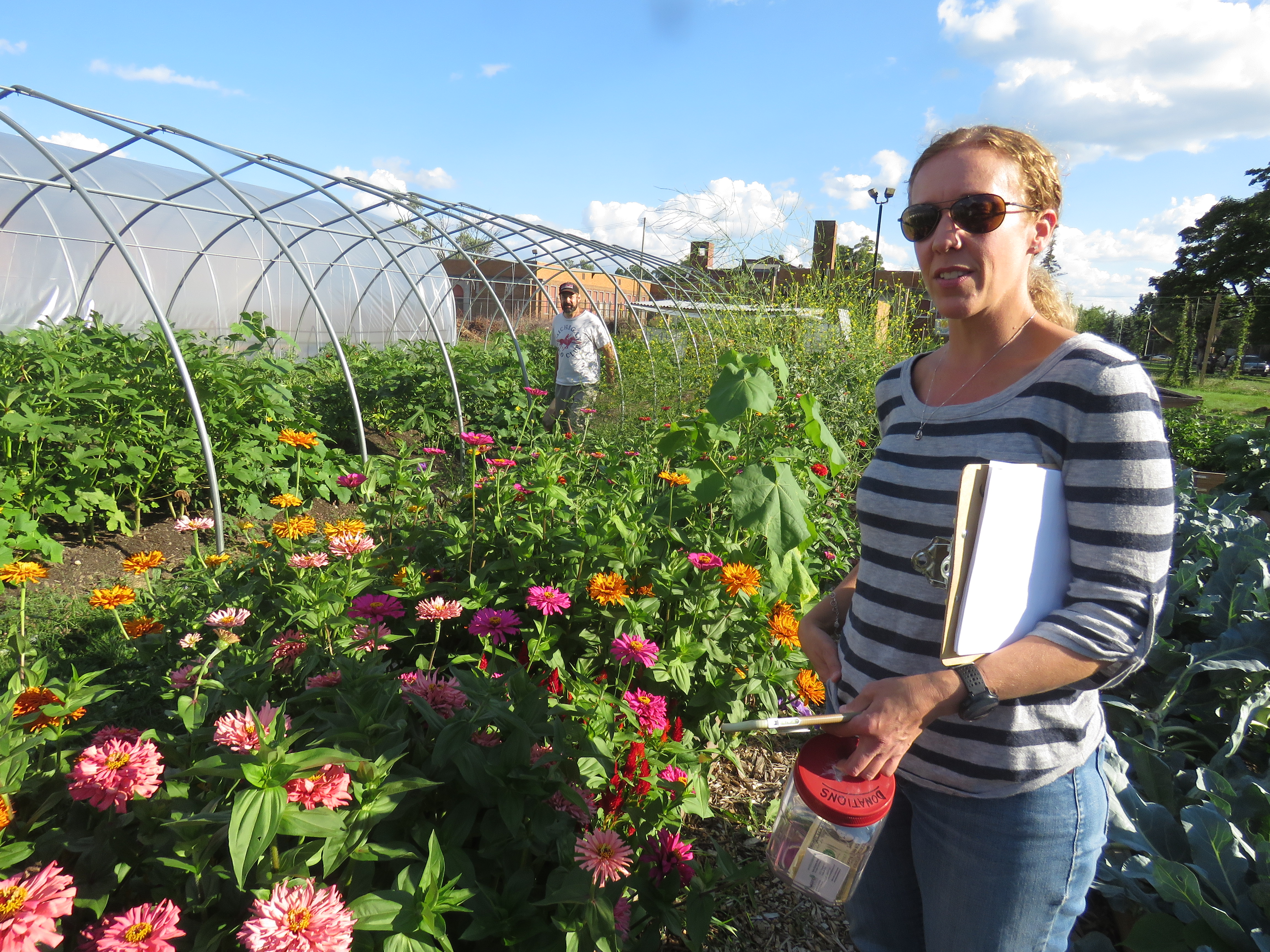 Robinson explained that her position with the Treasurer’s Office put her in charge of properties that don’t sell at Oakland County public tax foreclosure auction. She needed to find ways to use and sell the vacant lots in Pontiac. She went on to explain, “In a previous job, I worked at The Greening of Detroit and know how a community garden – or just the care of a vacant lot – can be a community builder. There were gardens in Pontiac that I noticed just from driving around looking at what the Treasurer’s Office owned, but there didn’t seem to be a group that engaged them.” 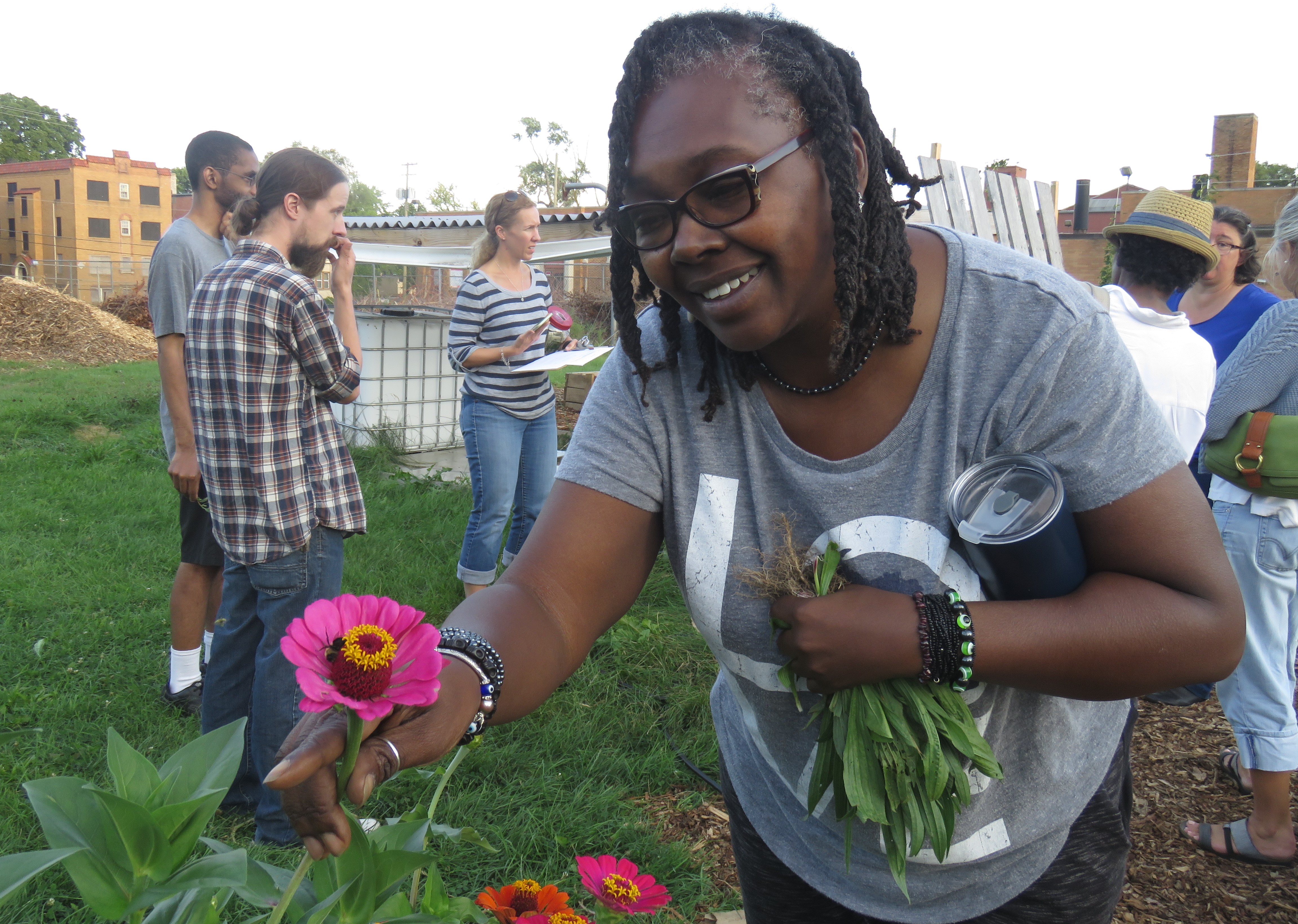 While Robinson welcomed other arrivals, I wandered about the flowers and vegetables before the actual weed walk began and scribbled more notes. She later confirmed my questions and some of my assumptions with these words. “Growing Pontiac is a coalition that strengthens the local food system in the city of Pontiac and surrounding neighborhoods in Michigan. We believe in seeing our communities pursuing healthier choices. We hold classes and meet occasionally but plan to start meeting more regularly since there is a greater interest now. The ultimate plan is to operate as a nonprofit and to be a resource hub for gardens – providing classes, tools, seeds, advice and a place to see where people can look at maps to see where there are publicly owned vacant lots around that could be used for a garden or gathering space.”

The actual “What’s that weed” walk was led by Lea Pfeifer, a volunteer at the garden and enthusiastic promoter of herbalism, the study of botany and use of plants intended for medicinal purposes. She freely shared her shared her thoughts as the walk got underway, including one that hit home, “I’m always telling people not to pull ‘that weed’ because it’s food.” She then went on to show participants many of the common wild herbs that grow freely all across Oakland County. She emphasized that dandelions are “great friends” to have because every part is edible but also cautioned, quite correctly, that edible wild weeds should not be gathered from chemically treated suburban lawns. 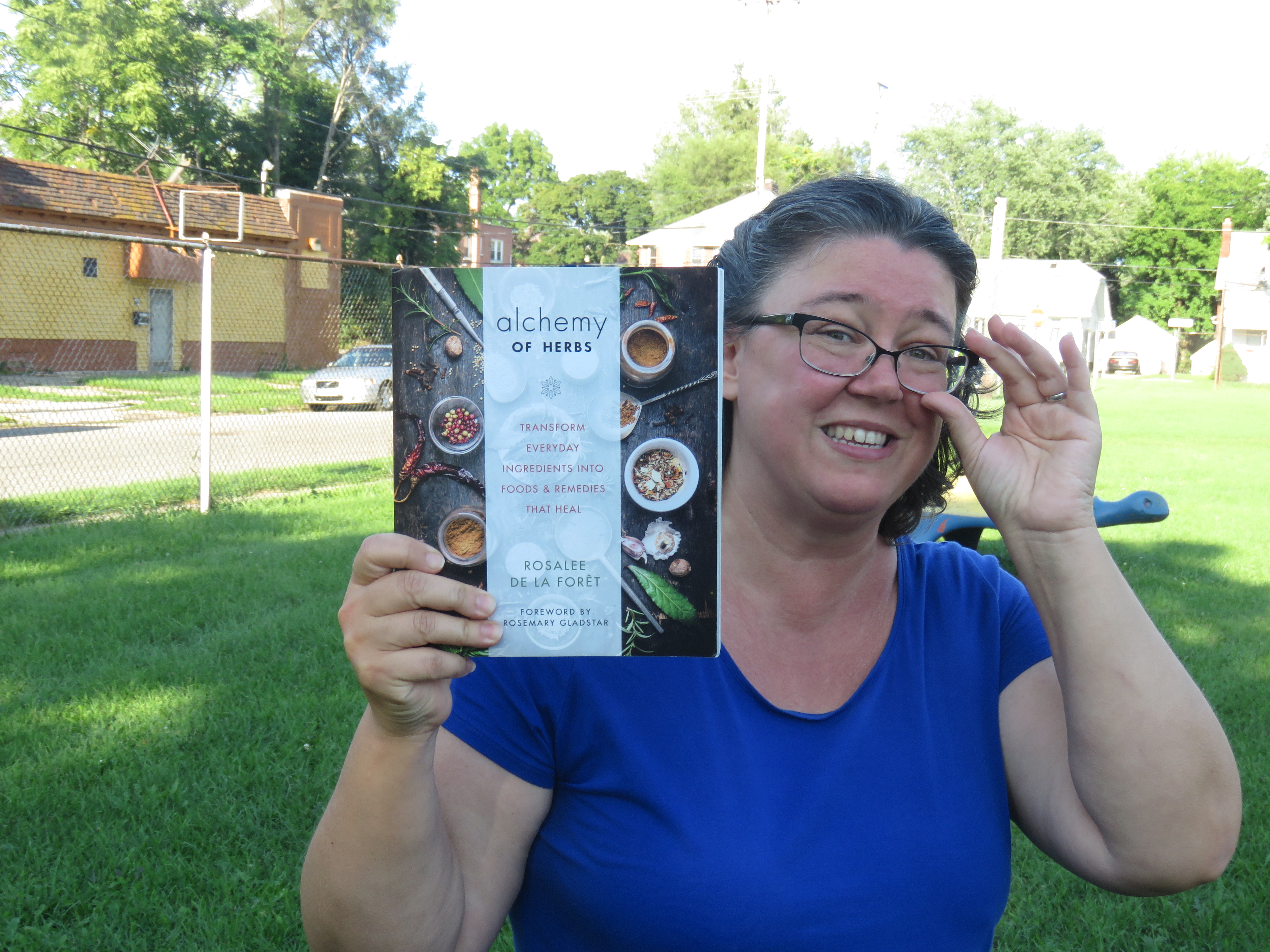 I was very familiar with the next two species on her “find and sample” list that included plantain, a very common lawn plant that can be boiled as a vegetable or mashed into a poultice to treat bites and stings, and my personal favorite, purslane. Purslane (Portulaca oleracea) thrives in our area and has spread throughout the world as an edible wild food. Even though some look at it as a worthless weed, many cultures embrace purslane as a food. As I knelt to photograph one large specimen of purslane, I remembered having seen it flourishing in sidewalk cracks near McLaren Hospital in Pontiac. And even though the U.S. Department of Agriculture still classifies purslane as a “noxious weed,” others look at it as superfood, because it’s high in heart-healthy Omega-3 fatty acids and beta-carotene. As for its taste, I would say “tangy” with a slight lemon flavor. Coupled with its crisp texture, I believe it won’t be long until it starts appearing in upscale restaurants; quite the transition from a scorned upon sidewalk crack weed. 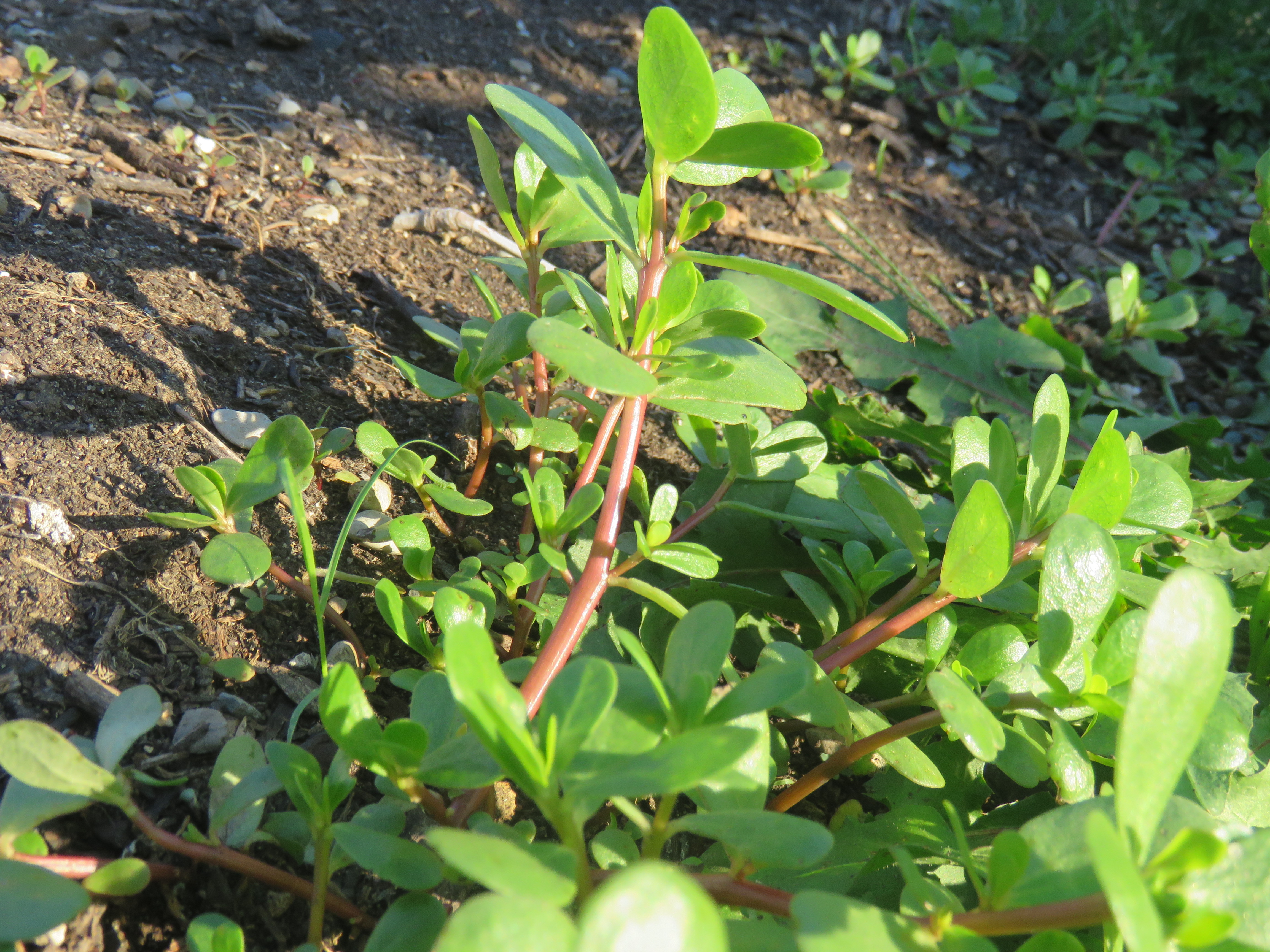 Pfeifer’s comments on Queen Anne’s Lace, also known as wild carrot, brought laughter from the gathering. She stated, “Always remember the queen has hairy legs”, a reference to the stem of Queen Anne’s Lace. She went on to explain that some poisonous look-alikes have smooth stems while Queen Anne’s Lace stems feel fuzzy. Safety was a continuous theme as we walked through the once busy playground picking and tasting nature’s bountiful gifts. I was pleased to see she warned to be cautious of Facebook postings for positive identification and made it clear to never ingest a wild weed or other plant unless positive ID is made from multiple sources. She also passed around books that help with identification, including one of my favorites, Identification and Harvesting of Edible and Medicinal Plants by Steve Brill with Evelyn Dean. As the evening came to an end we went our separate ways with bits of green on our teeth, lips and fingers from our foraging in that old school yard. 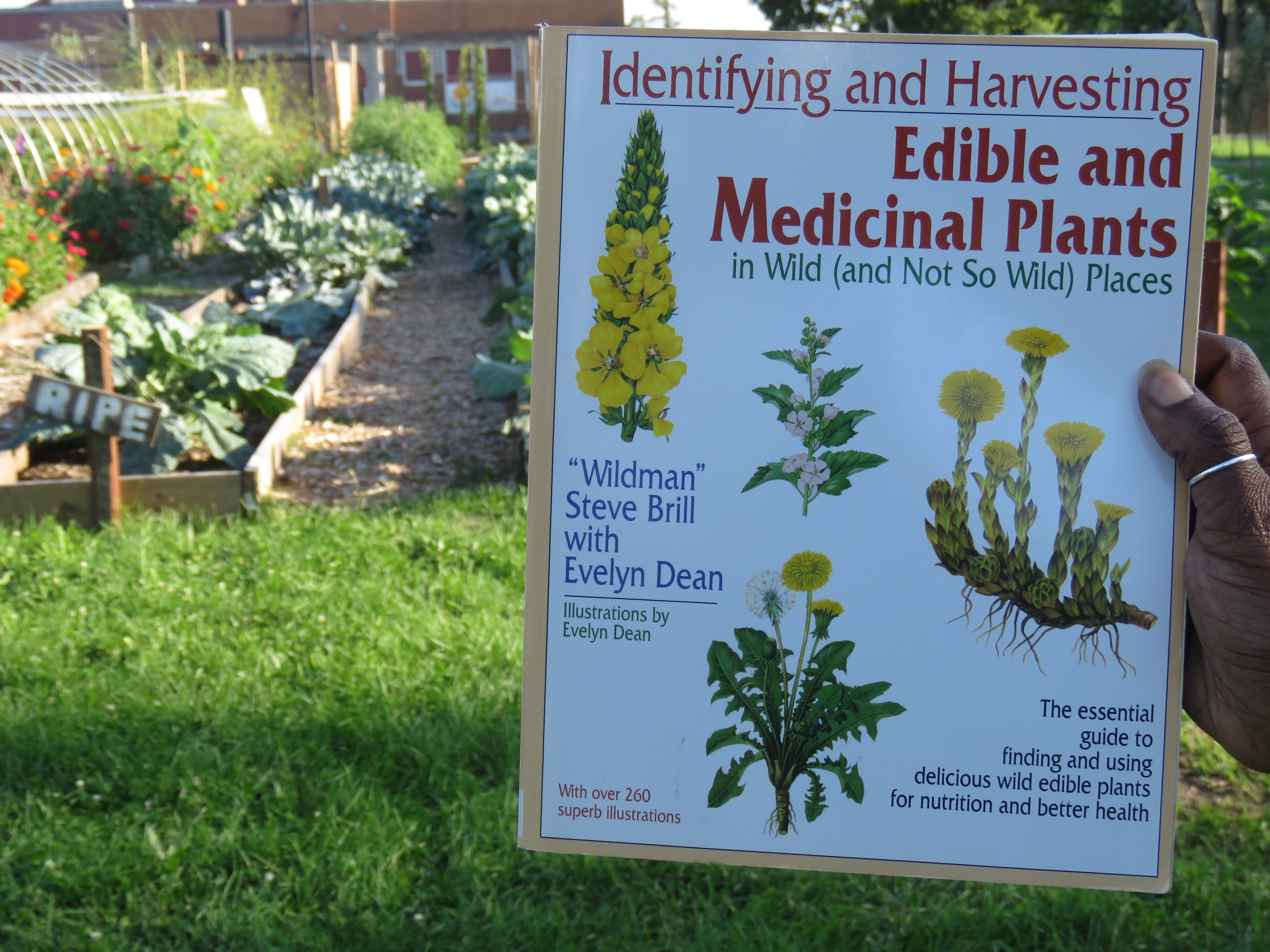 I explored the Micah 6 website after returning home, and I’m glad I did for it filled in many of the missing blanks in my mind as to how the garden at the former school surged ahead so quickly, with obvious neighborhood support. “Our city, like much of urban America, struggles with fresh food access. Our neighborhood is (currently) a USDA designated food desert and with transportation struggles. Healthy food is out of reach for many of our friends and neighbors. We’ve adopted three initiatives to help attack the problem head on: community gardens, Sprout Fresh Food Store and a series of pop-up markets.” 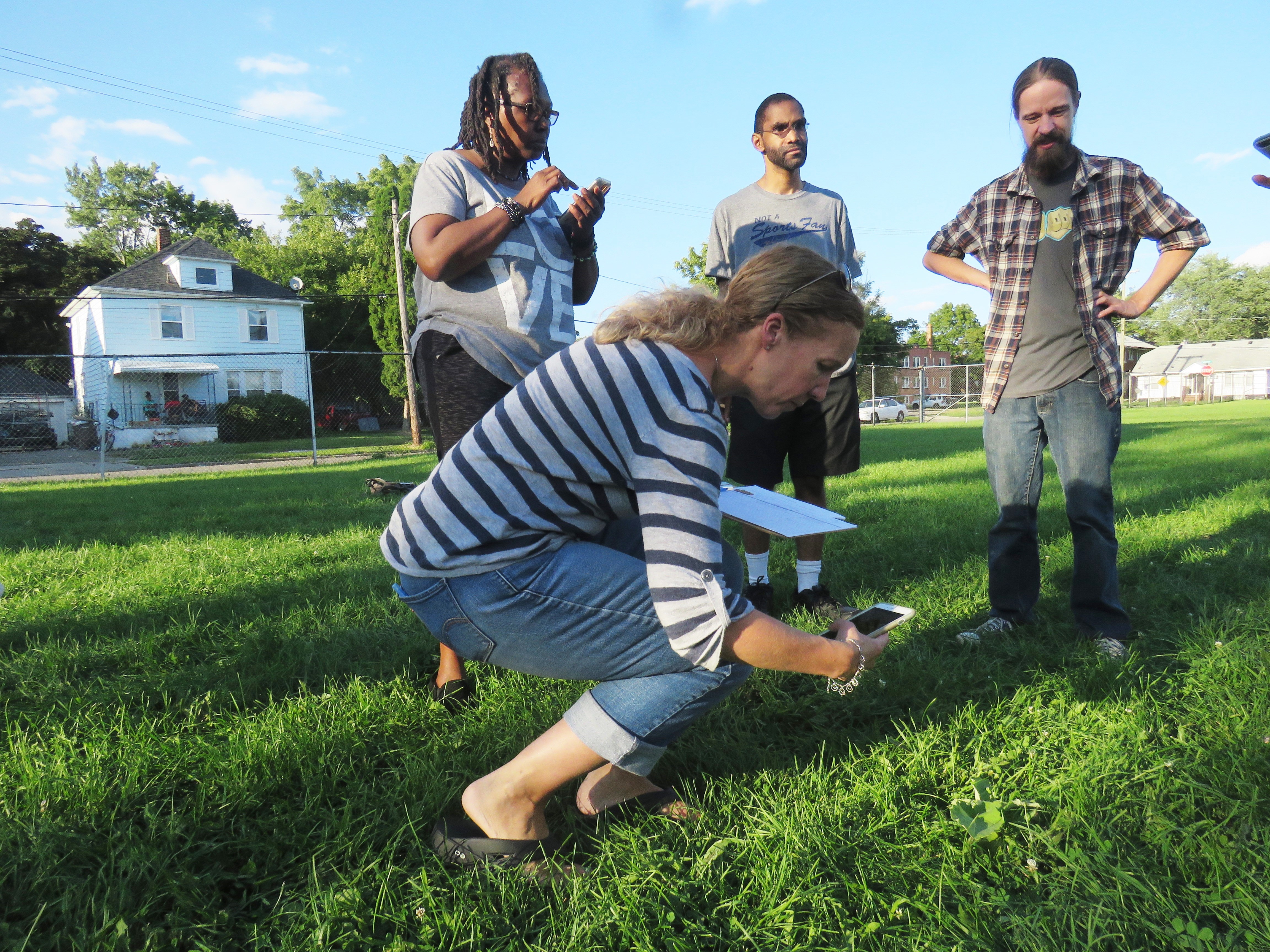 Does Pontiac have a healthier, greener future in store? Based on that evening’s program, and the unbridled enthusiasm of those behind it, I would say yes. Weeds and community driven urban gardens just might be a growth catalyst when combined with the efforts of a contingent of good people that look ahead to the future. As for the future, Robinson shared more with me, “At the moment, we are working toward a Growing Pontiac teaching garden over in the Unity Park neighborhood at S. Paddock and Elm St. We plan on having raised beds, composting and some phytoremediation plantings since the property abuts an old rail line. We hope to do some plantings still this season! It’s been so fun getting out into the community and meeting so many people doing some really cool things throughout Pontiac!” 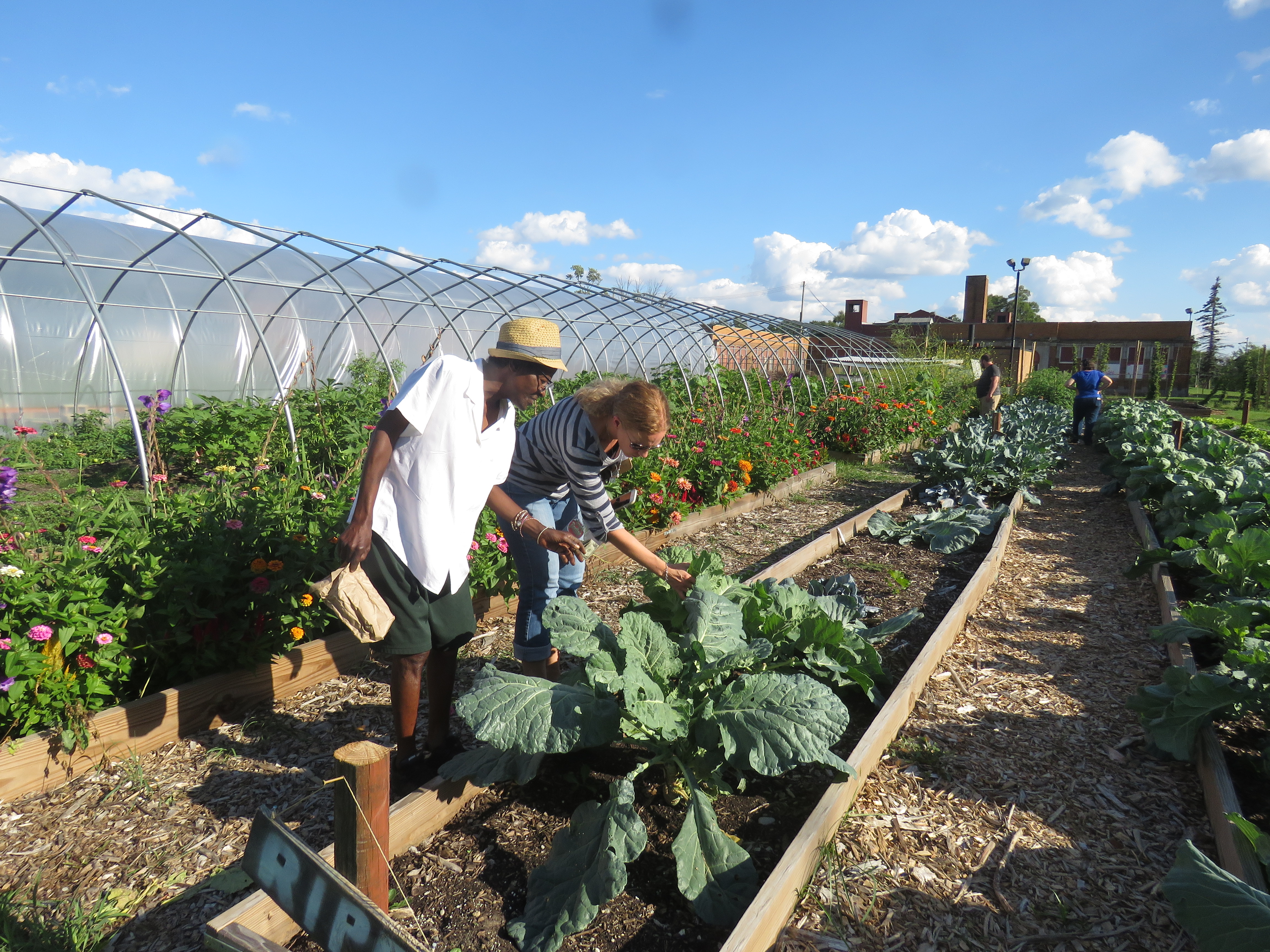