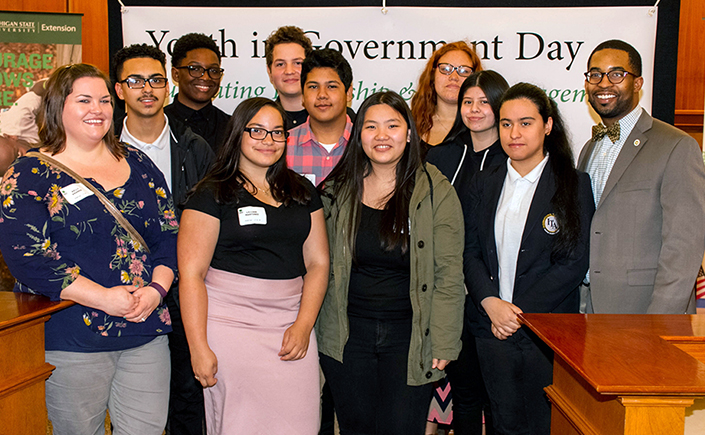 On May 23rd, the Oakland County Board of Commissioners showcased county government in action to area high school students during their annual Youth in Government Day. Civic engagement was the priority for the day as students engaged in critical thinking exercises and learned about the different departments in county government and how they support the community.

The event, which drew more than 100 high school students from across the county, featured speakers, mock debates, a courtroom visit, and engaging demonstrations centered on Oakland County’s role in the lives of its citizens.

Commissioner Shelley Goodman Taub opened the event with a warm welcome for the students and a brief presentation on the three branches of government. Students then heard from representatives and officials with experience across the branches of government, including Deputy County Executive/CIO Phil Bertolini, Oakland County Clerk and Register of Deeds Lisa Brown, Treasurer Andy Meisner, Water Resources Commissioner Jim Nash, and a Panel of Commissioners. 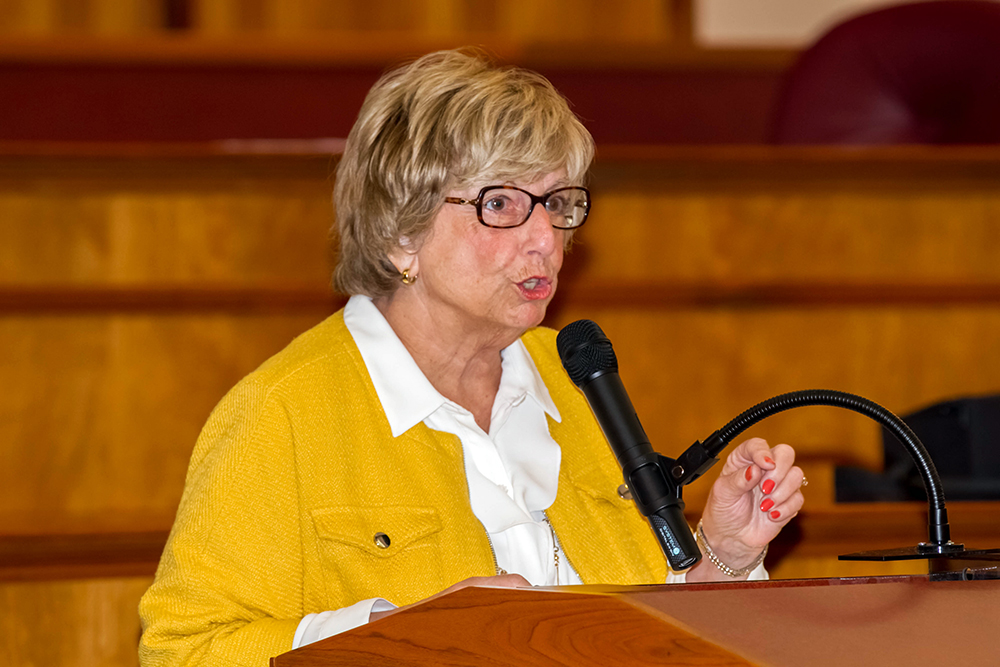 Students were polled by the speakers throughout the event and able to respond using hand-held clickers. Answers were tallied and shown to the group on a screen. Oakland County Deputy County Executive/CIO Phil Bertolini opened by asking, “Do you want to work for government?” The poll indicated that a majority of the students responded that they weren’t sure. Bertolini helped to educate them by listing various job opportunities that exist in county government, like engineering, fleet vehicle management, law enforcement, and health care, and how they support our citizens. He shared, “Everything starts with a job. For any field you want to go in, we have that function in county government. We hire people to help with those services.”

Oakland County Clerk/Register of Deeds Lisa Brown explained her dual duties as both the Clerk and Register of Deeds. “I encourage citizens to start voting as soon as they are eligible, to exercise their fundamental right as Americans,” said Brown. “We’re empowering young people to have their voices heard.” She encouraged eligible students to register to vote while at the event. 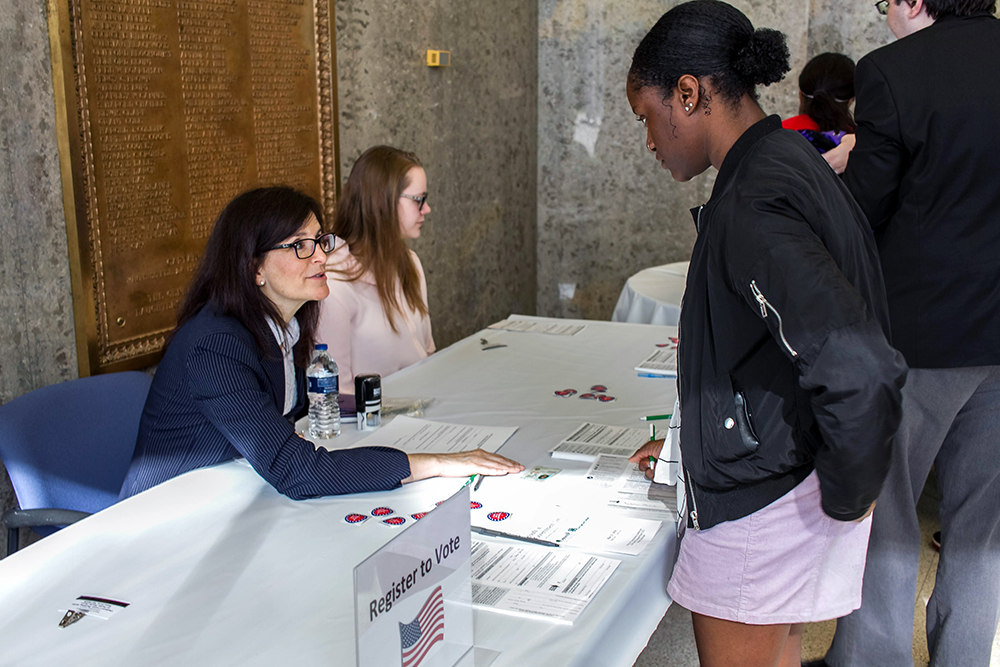 During his remarks, Treasurer Andy Meisner told students, “I appreciate your focus on learning about government.” He asked the high schoolers if they knew what percentage of Oakland County residents pay their taxes on time. Students who guessed 97.5% were correct. Meisner went on to explain the importance of financial accountability to the group and left them with this message, “The future is in your hands, you’re going to do great things!” 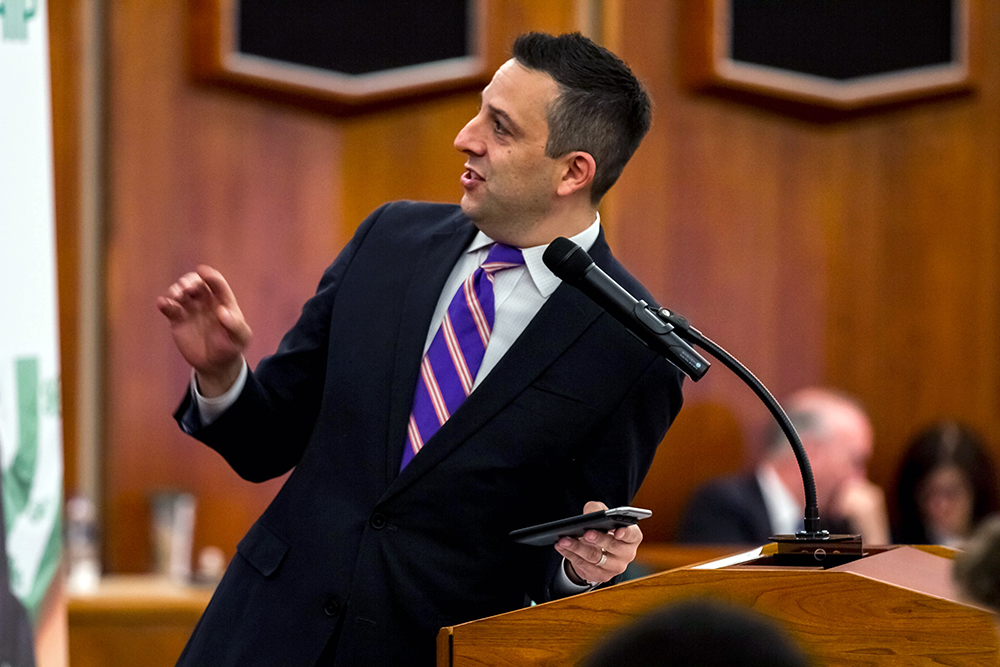 Oakland County Water Resources Commissioner Jim Nash was impressed to see so many young people in attendance. He explained that his office touches every community in Oakland County and its number one job is to protect the health and welfare of their residents. Nash asked students to keep in mind that the county offers tuition reimbursement right out of high school. He closed by thanking students for coming and instructed them to, “Keep going!” 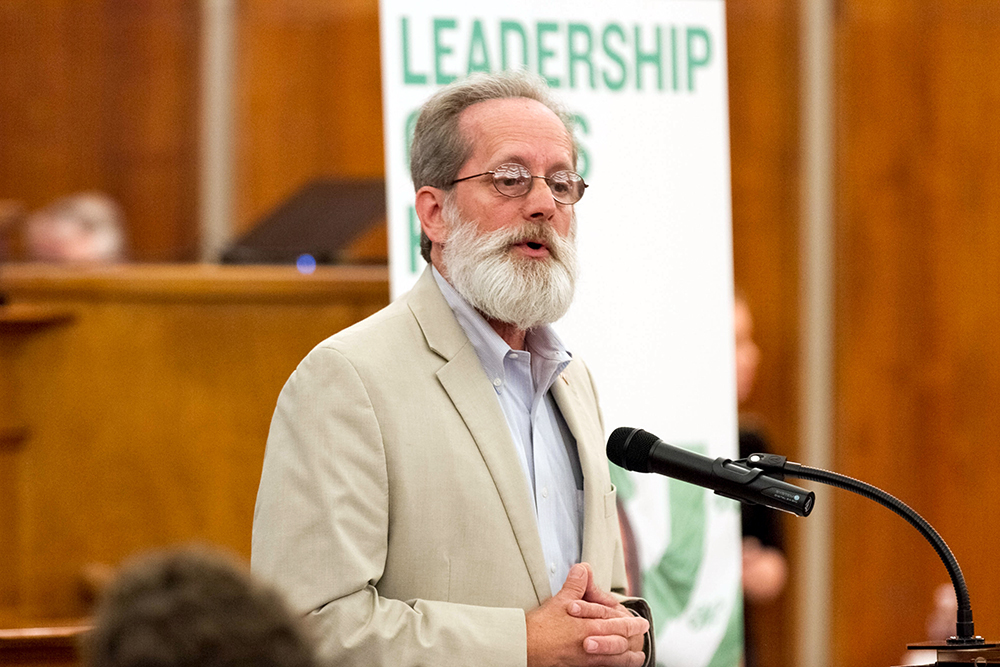 Commissioners David E. S. Bowman, Bob Hoffman, Helaine Zack, Tom J. Berman, and Shelley Goodman Taub took turns at the podium and explained how they came to be in public service. Bowman wanted to make sure the needs of his community were being met and that they had access to the resources they needed. Hoffman felt that this was a position where he could truly help people. Zack feels as though her position helps her to be an advocate for mental health. Berman, the newest commissioner and an Elite 40 alumnus, explained that commissioners are in effect the county congress, with each one representing 50-60,000 people. He encouraged everyone to consider public service in the future.

Commissioner Taub’s story was of keen interest to all. She ran for public office on a dare from her husband. As a former teacher and medical center manager, she knocked on 4,500 doors to make herself known to the community. “I came out of nowhere, no one knew who I was and I won my very first election in 1992.” She continued, “You can do it, if you want to do it. It’s hard, hard work.”

Students took a break to have a snack and mingle with one another, and then came back to a critical thinking workshop and mock debates. This segment was facilitated by Darren Bagley, an energetic and engaging educator on the Youth Development team at MSU Extension 4-H. 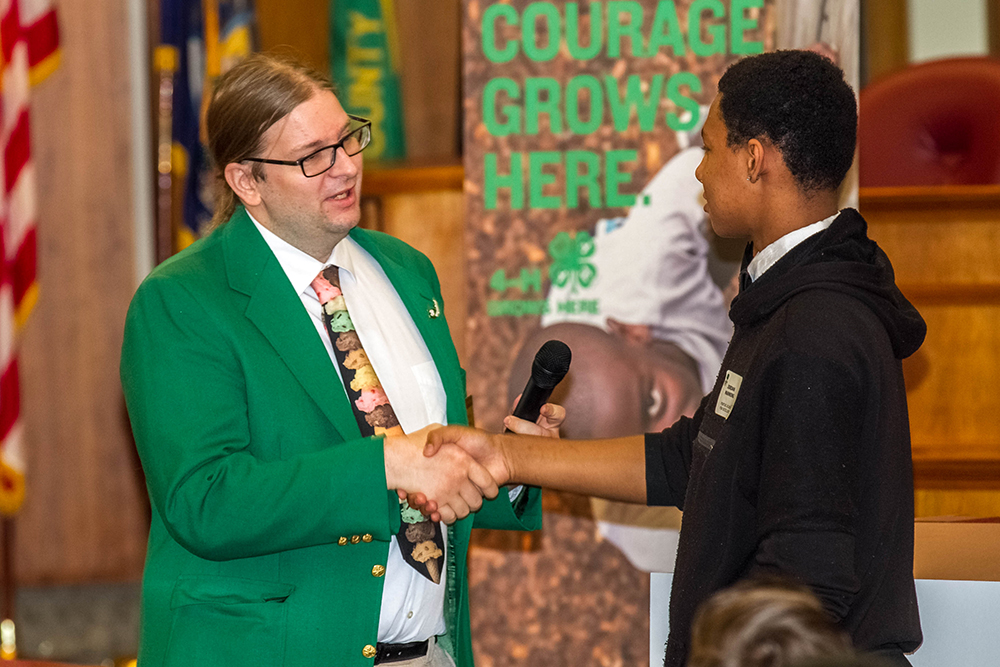 Darren Bagley and a student demonstrate how to shake hands properly

Bagley’s critical thinking workshop focused on the ideological filters through which people often process information. During the exercise, students were prompted to place themselves along a spectrum between “agree” and “disagree” on various current and often controversial issues. Once students assumed positions on one side of the room or the other, Bagley presented new information and allowed the high schoolers to make the case for their choices on the issue. He told students, “Your brain tries to protect your ideas, but it can shut out other ideas.” At the end of each exercise, students had the opportunity to adjust their position along the spectrum: symbolizing their transforming stances on the given topics. Bagley stressed the importance of looking at all the available information to make a decision. He said, “The ability to change your mind when you get new information is not a weakness, it’s a strength.”

During the mock debates that followed the workshop, students debated the merits of hypothetical policy measures on clear backpacks at school, a soda tax, and vaccine waivers. These debates were facilitated by members of the the MSU Extension 4-H Youth Development team, with assistance from content experts from the Oakland County Sheriff’s Office and Health Division. Students voiced their opinions as they worked toward a solution. After the debates, students broke for lunch and headed to the cafeteria for some downtime with friends and the opportunity to talk casually in small groups with the commissioners.

After lunch, they headed to the courtrooms of Chief Circuit Court Judge Shalina Kumar and the Honorable Jeffery Matis, Family Court Presiding Judge, where they learned about the judicial system, the importance of jury duty, and even witnessed a mock plea agreement. Students asked questions about law school, difficult cases, and work/life balance. Some students got the opportunity to sit in the jury box.

Oakland County Sheriff Bouchard greeted students back in the auditorium and shared a special Forensics Tour video presentation created especially for the event. The sheriff expressed the importance of civic and community duties within his department and the need for motivated young men and women to join the Oakland County Sheriff’s Department. 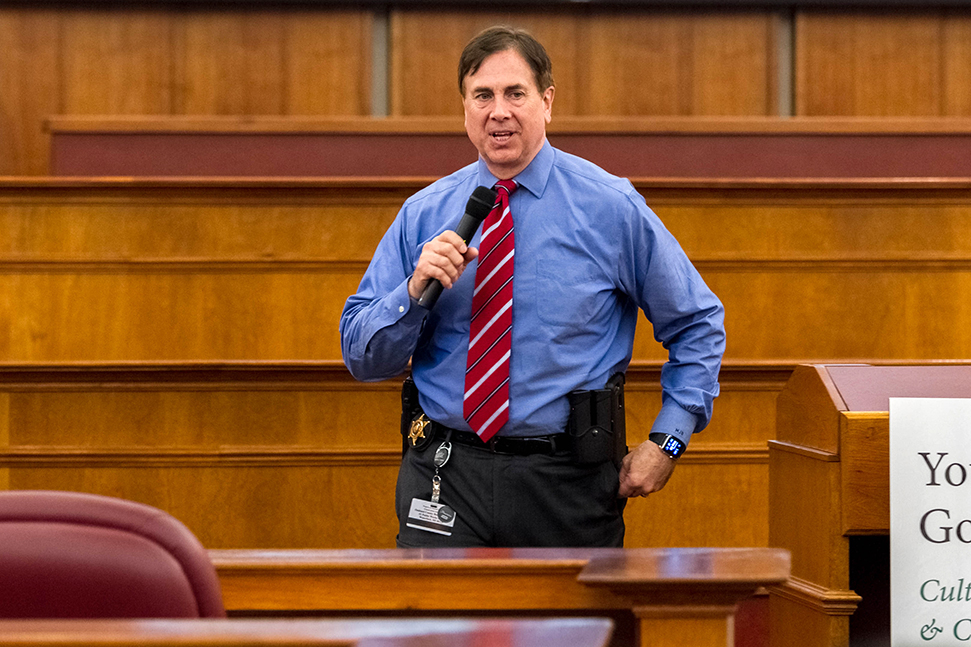 K-9 Mordus, the star of the day, made an appearance with his handler, Deputy Chris Topacio. Mordus and Deputy Topacio have been working together since June of 2014. Mordus can run 35 mph and is certified in all areas of training, but specializes in searching for narcotics and tracking. According to Deputy Topacio, Mordus is bilingual, having been trained in Dutch, and can even understand inflection of voice. Much to the delight of the students, Deputy Topacio shared that one deputy he knows actually speaks Klingon to his K-9. The students witnessed Mordus following commands, using a scratch box to alert to the presence of narcotics, and immobilizing another deputy who was pretending to be a suspect – while wearing a protective bite suit, of course! Mordus and Deputy Topacio were definitely a highlight for many of the attendees.

As students made their way out of the building, they had the opportunity to tour the Oakland County Sheriff’s Lenco Bear armored vehicle. With an up-close and personal view, the high schoolers were impressed by the massive vehicle and its technology. 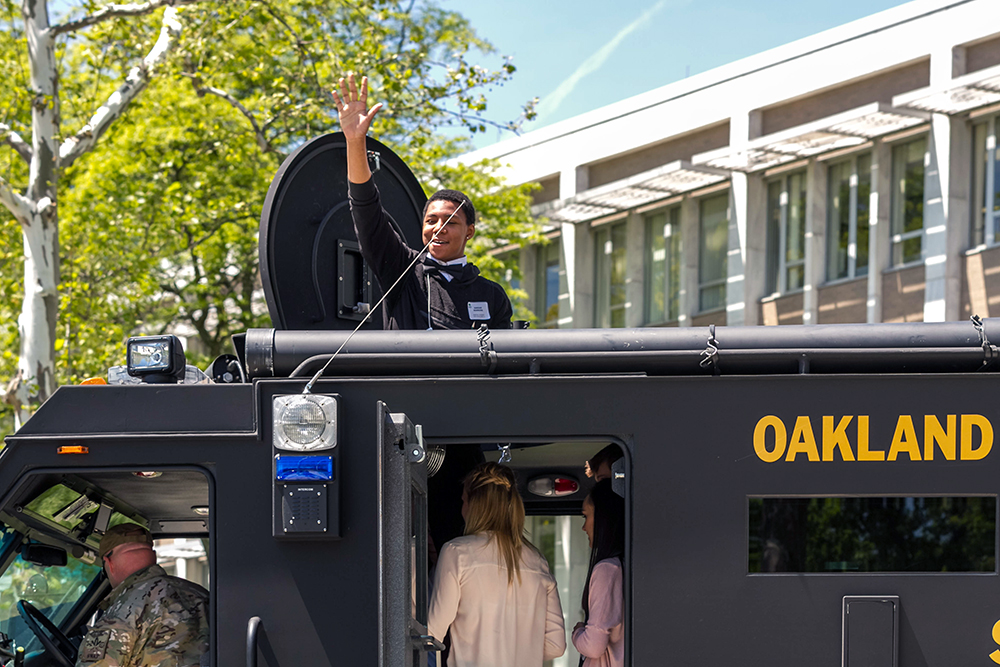 Students left this year’s event with a stronger sense of what their county does for them each day. In addition to hearing from countywide officials, they had opportunities to speak with commissioners. Upon leaving, Commissioner Taub emphasized the importance of remaining active in their local government after the event.

Throughout the day, students were encouraged to engage online with the county at the event. Participants were able to use a special Snapchat Geofilter designed specifically for Youth in Government Day and to join the conversation on Twitter, where #YouthInGovernment became a trending topic. Select Snaps were then featured on the county’s first ever Instagram Story.

The event, hosted by the Board of Commissioners, featured dynamic speakers from all corners of county government.

A special thank you to all participating students, schools, and chaperones.

And a very special thank you to the MSU Extension 4H staff, who generously donated their time and expertise to help develop and execute the day’s sessions and activities.