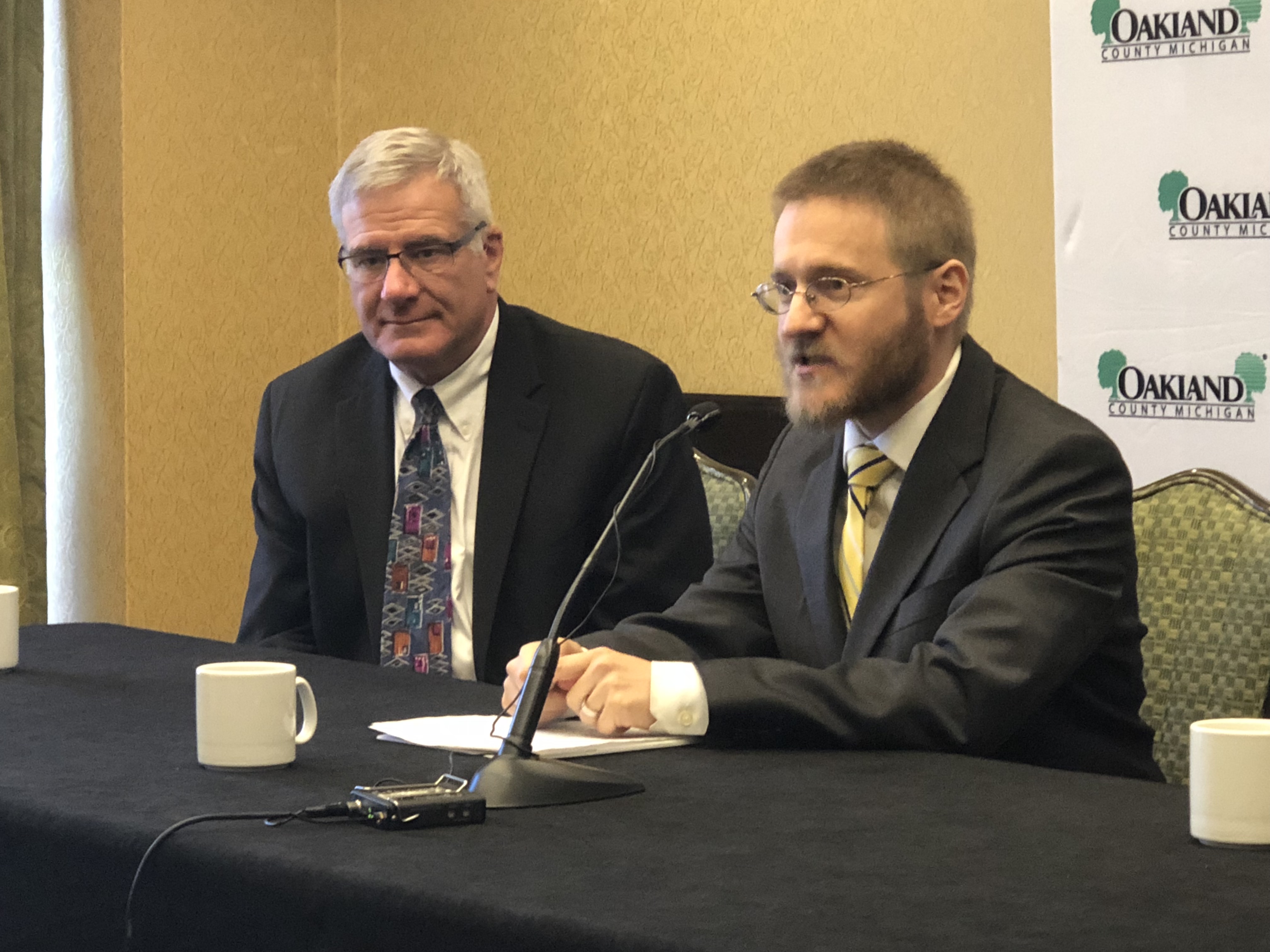 Before the luncheon, Oakland County Executive L. Brooks Patterson, Grimes, and Dr. Ehrlich spoke to the press and shared highlights from the report. According to the report, Oakland County has posted 119,100 job additions from 2010 – 2017. The county’s average growth pace of 2.6% per year outpaced both the nation’s and the state’s average rate of 1.8% over the same period. The continued recovery in Oakland County is consistent with the sustained expansion of the U.S. and Michigan economies. View a digital copy of the 2018 – 2020 Oakland County Economic Outlook Summary online.

“The most rapid growth industries in Oakland County are in professional and technical services like engineering,  computer science, and design, the second is healthcare, and third is hospitality and leisure,” said Grimes.

“Higher-wage industries grew faster than average on a percentage basis in Oakland County from 2010 – 2017. The 42,468 job additions in this category came to a total growth of 22.3%,” reported Dr. Ehrlich.

The news was welcomed by Patterson and his grandson, Brooks Warner, who was in attendance for Take Your Child to Work Day.

“I’m proud to say the forecast puts a feather in the cap of our Emerging Sectors economic diversification initiative, which fosters growth in the top 10 knowledge-based industries,” said Patterson.

Oakland Community College (OCC) hosted a reception where OCC Chancellor Peter Provenzano was joined by Detroit Institute of Arts (DIA) Director Salvador Salort-Pons and Forgotten Harvest First Vice Chairperson John C. Carter. Salort-Pons shared that the DIA is an organization that is now looking outward, going beyond the walls of the museum to serve the counties and communities. He provided details about DIA exhibitions and thanked Oakland County for its support. Carter spoke about Forgotten Harvests’ commitment to end food waste and hunger in Metro Detroit and its collaboration with OCC to make sure that people are gainfully employed by conducting workforce training. OCC Chancellor Peter Provenzano indicated that skilled trades continue to be at the forefront in college education and that OCC is driven by the power to succeed. Patterson’s 10-year-old grandson brought the OCC reception to a close with poise as he stood at the podium with Provenzano and stated, “We are Oakland Community College – Excellence Empowered.”

Brad Terryn, Senior Vice President at JP Morgan Chase, welcomed the packed room and talked about JP Morgan Chase’s commitment, through the Veteran Jobs Mission, to hire 100,000 veterans by 2020. He also shared details on Chase’s culture of giving, “Chase employees have provided 2,400 hours of volunteer service in the state and 48% of those were in Oakland County.” Terryn, a life-long resident of Michigan and current Oakland County resident, is responsible for banking relationships with state and municipal departments, agencies, and authorities in the midwest.

The 33rd Economic Outlook Luncheon could not have been such a success without Oakland County’s Department of Economic Development & Community Affairs, Advantage Oakland, which includes Deputy County Executive Dr. Timothy Meyer, Director Irene Spanos, Deputy Director Dan Hunter, and about 90 other employees who work in the department. The team has been working to address labor challenges through several initiatives and partnerships with Oakland County Michigan Works!, Oakland Community College, and Oakland Schools. Advantage Oakland offers One-Stop Ready, Tech248, One Stop Shop, Main Street, and more.

A digital copy of the 2018 – 2020 Oakland County Economic Outlook Summary presented at the Luncheon is available online.