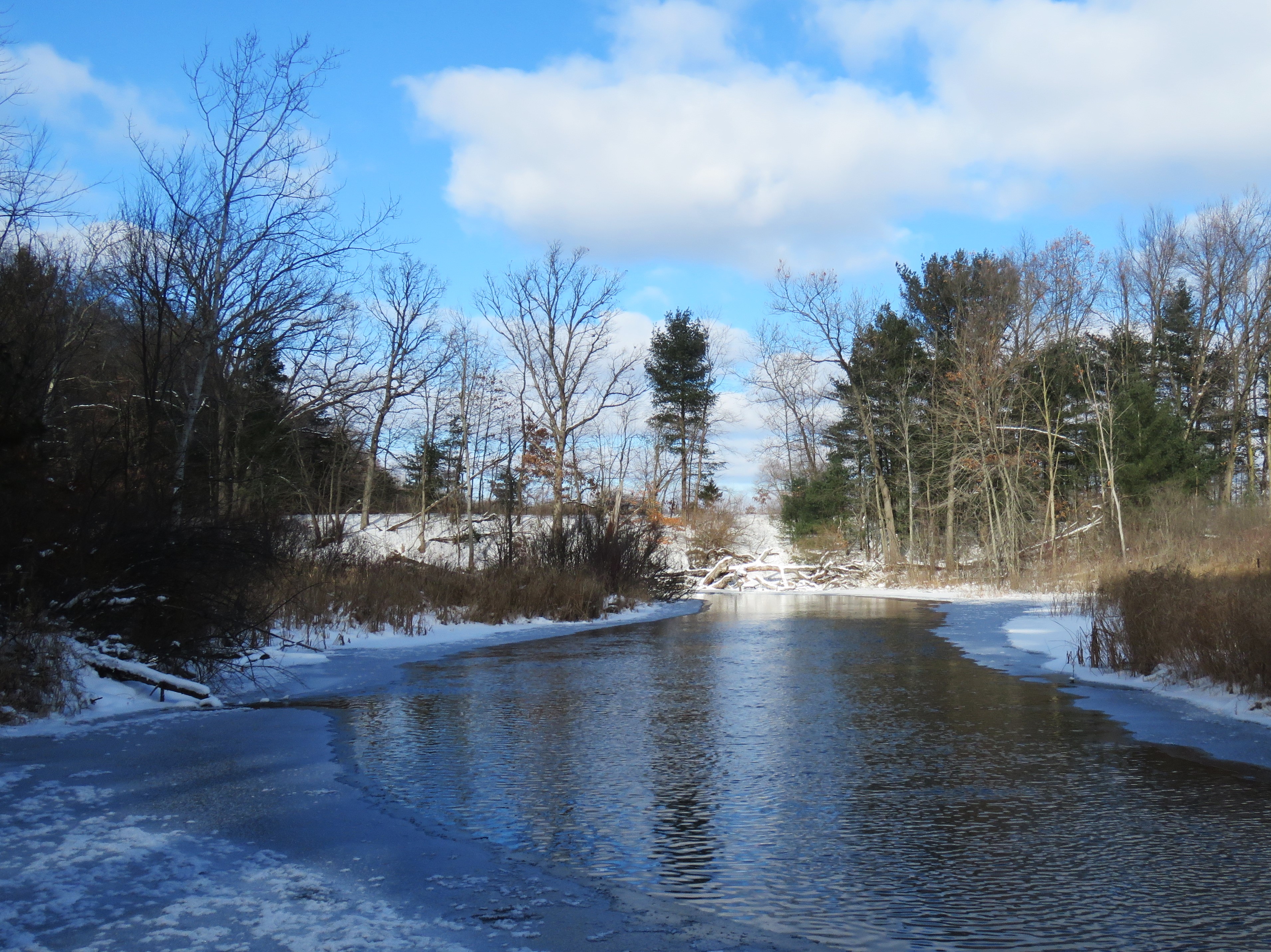 The wilds of nature on a frigid sunny day can be a magical place. Red squirrels leap from low branches and tunnel under snow. Red-tailed hawks perch on tree limbs above frozen marshes, perhaps waiting for the tempting movement of rabbits. Rivers flow and shoreline ice sparkles and crackles. That was nature’s welcome to me on the first day of the New Year. I breathed deeply from the evergreen scented air and headed for a large stand of towering red pine trees that were planted in neat orderly rows during the Great Depression. The pines created an image very much unlike what one expects in wild nature; yet to the naturalist spirit within me, they beckoned to be explored. 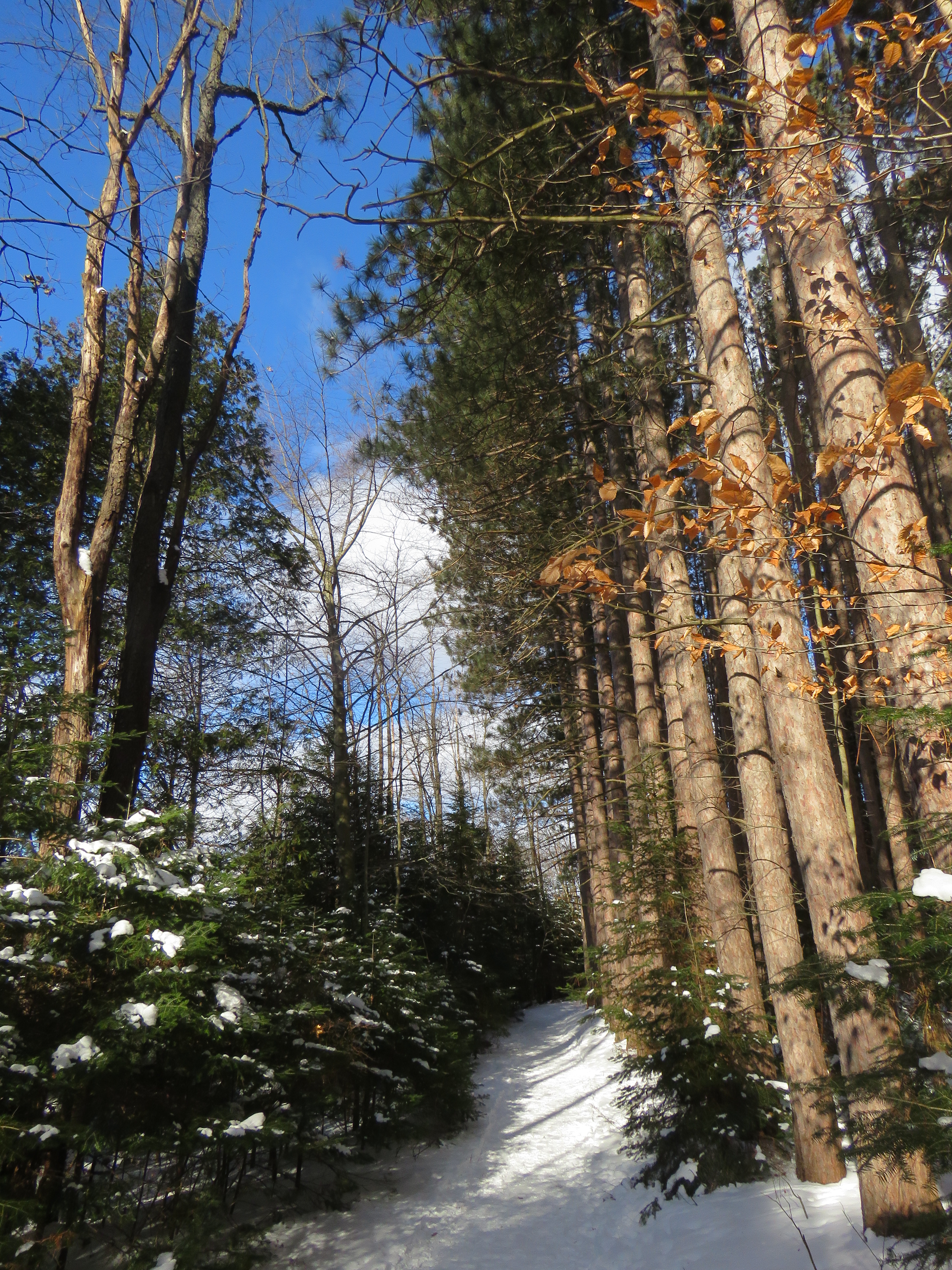 That was just part of the visual scenario that greeted me on New Year’s Day at Proud Lake State Recreation Area, a 4,700-acre multi-use wildland in Commerce Township managed by the Michigan Department of Natural Resources. The entire scene reminded me of a two-word phrase I read about years ago, Chaotic Harmony. It’s a good, but seldom used, and sometimes misunderstood phrase. I was about to walk between those two extremities, into the realm of nature’s ever changing reality and into a world where man has left a heavy footprint. Michigan artist/writer/naturalist Gwen Frostic wrote about Chaotic Harmony in 1989. As I trudged through snow under the canopy of those orderly red pines, some of her words came to mind. Here’s part of what she wrote, from what I had saved in a notebook.

“Tilt too far towards chaos – –
One finds depression and despair—
Too far toward harmony
Is to lose that vital balance so essential to life. “

“Amongst all that happens upon this earth –
The natural fluctuations—
Man-made changes—
Life and death—
The moon continues its aeonian cycle-
Earth still orbits the sun
Seasons follow season
And life will go on. “

I would not be hiking alone on this day, for the memory and spirit of Gwen was with me – and I was attending a special gathering. The first day of New Year was well underway when I arrived at Proud Lake to take part in an annual event, the First Day of the Year in the Park – New Year’s Open House, sponsored by Heavner Canoe and the Michigan Department of Natural Resources. Most of the sixty or so participants were members of two outdoor adventure groups, the Michigan Adventurers Club and the SOLAR club. 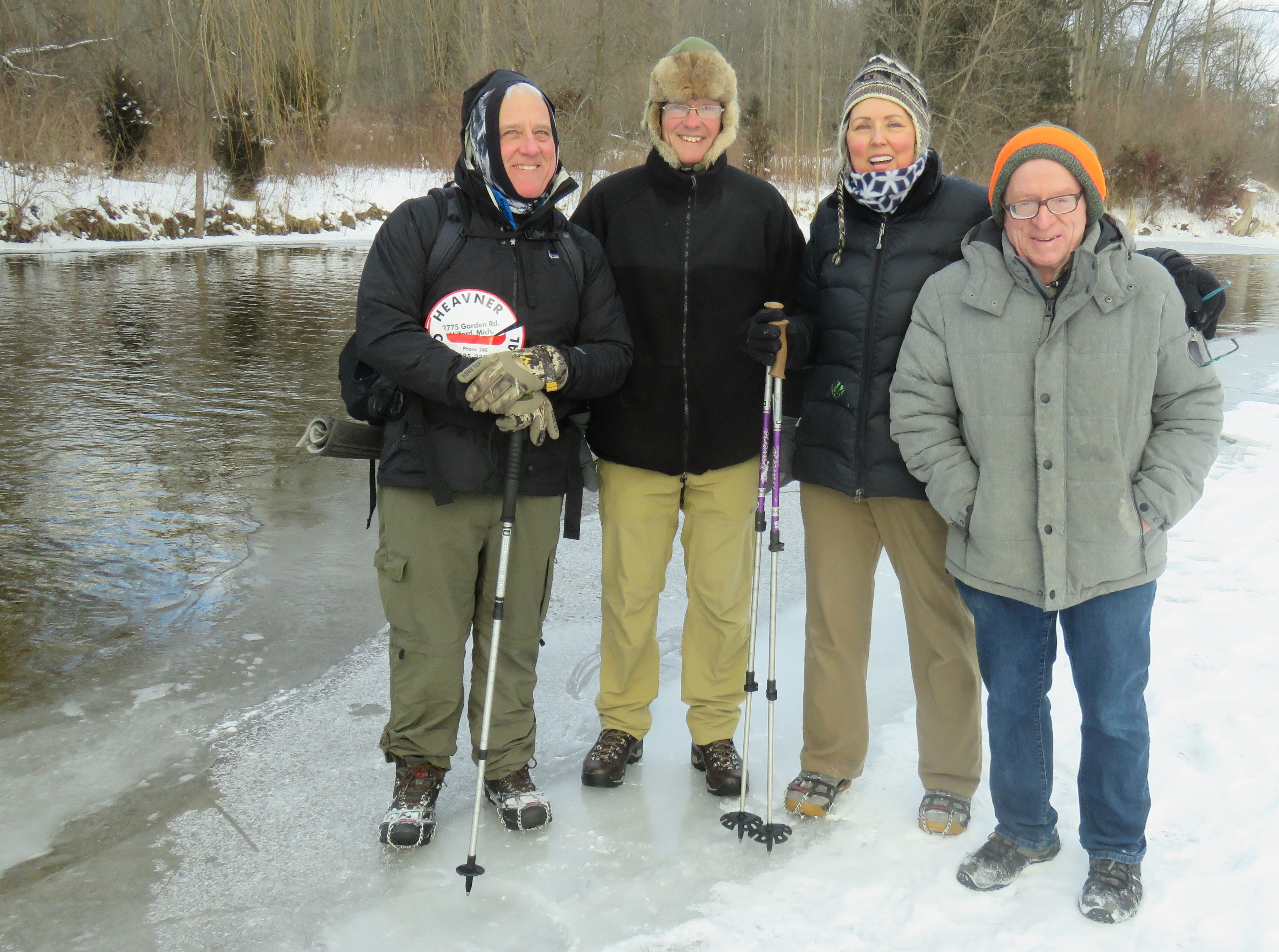 Some hikers were clad in jeans, others had brand new high-tech gear that may have just emerged from the gift box. In the world of nature-embracing “Chaotic Harmony” everyone there shared a commonality: the urge, and perhaps the need, to greet the New Year with a hike. That made everyone my friend, especially six-year-old Levi who proudly showed me his snowshoes before he set off with his mom. “What are they for?” I asked as I knelt in front of him. He proudly responded, “To walk on top of the snow!” It was going to be a very good day.

I started my adventure with a one-hour ramble along the trails closest to the Huron River, starting at the edge of the pine plantation. That section of the trail included part of a trail dedicated in 1959 as the Chief Pontiac Trail and was constructed as a salute to the great Ottawa chief: “The most formidable leader of the Indian Resistance movement faced by the English-speaking people who ventured toward the great Midwest.” I’ve come to realize that the best way to explore, or perhaps I should say, embrace the ways of nature in winter is on a solo hike, or one with only few carefully selected companions. Perhaps I looked a bit too official in my meander, for other hikers stopped to ask me questions. I was happy I knew the answers. “Yes, there are rainbow and brown trout in the Huron River” and “There are trails for cross country skiers, mountain bikers and equestrians – twenty miles of trails altogether.” 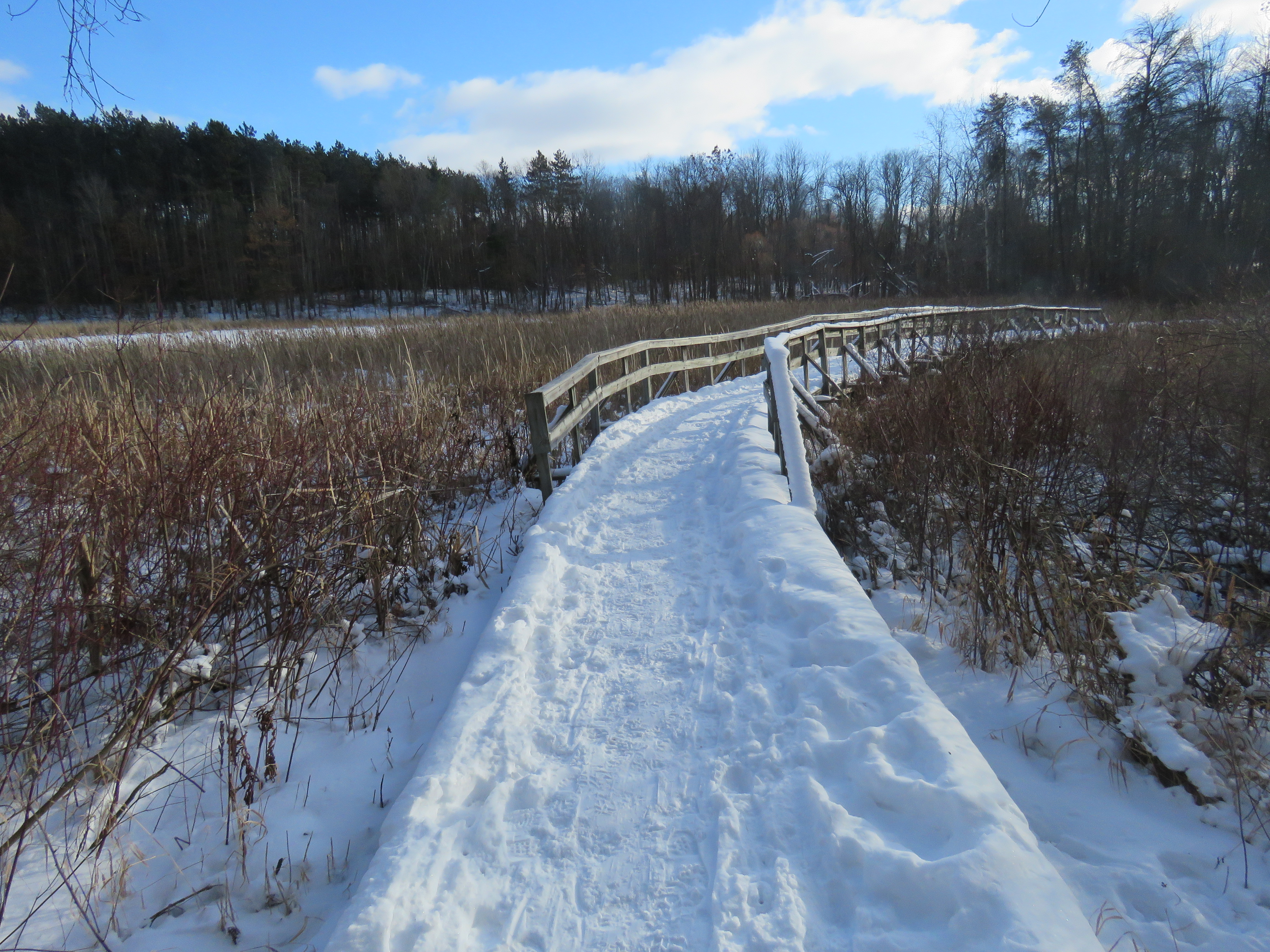 Some of the old style, well-weathered interpretive signs along the trail shared basic information on the Pine Plantation including Native American uses of the pine sap and needles in medicine. Although I usually devour historical information, I was more intent on keeping moving and keeping warm. Yet, I did stop briefly to admire tracks of white-footed mice. The evidence indicated they scurried about the snow during the previous night gathering bits of red pine, white pine and beech tree seeds.

Winter is a perfect time to pay attention to differences in tree bark. I noticed many young beech trees growing amidst the older black cherry trees. The bark difference is startling. The beech bark is just about as smooth as tree bark can be, while the black cherry tree bark resembles and feels like burnt potato chips. I meandered along the trail to reach the banks of the Huron River and then followed the river to a public launch site where a properly clad kayaker, outfitted in a dry suit and a PFD was setting out for his New Year’s Day paddle.

With the my fingers feeling numb from working with my camera, I trekked back to the Annex and feasted on dishes shared by the participants. So fortified, I headed off to the trailhead of the Marsh Trail, located just a few hundred yards from the Annex. A colorful sign shared its brief natural history, correctly emphasizing that a shallow glacial lake evolved into a marsh as thousands of years passed. I also took note at a much smaller bronze plaque secured to a stone: a memorial for Hartley Thornton, the first full-time naturalist for the Michigan DNR. I thought back to the time I met him in the early 80s at a gathering for naturalists and we chatted about rattlesnakes and human behavior. The cold wind reminded me to stop reading and keep hiking and so I circumvented the marsh, a delightful, easy to navigate trail meandering over small wooden bridges with endless vistas of winter. My favorite encounter of that trail? Fresh fox tracks near the cattails. I hiked on wondering if I interrupted an afternoon hunt for the meadow mice that tunnel under the snow. A few ‘pounce’ marks made me think I did.

With the sun already low on the horizon I headed back to the warming fire at the Annex to join the others that braved the cold to celebrate the New Year, and left with a deeper understanding of the pleasure of “Chaotic Harmony” on the Wilder Side of Oakland County. Happy New Year to everyone. Safe adventures to all and see you on the trails! 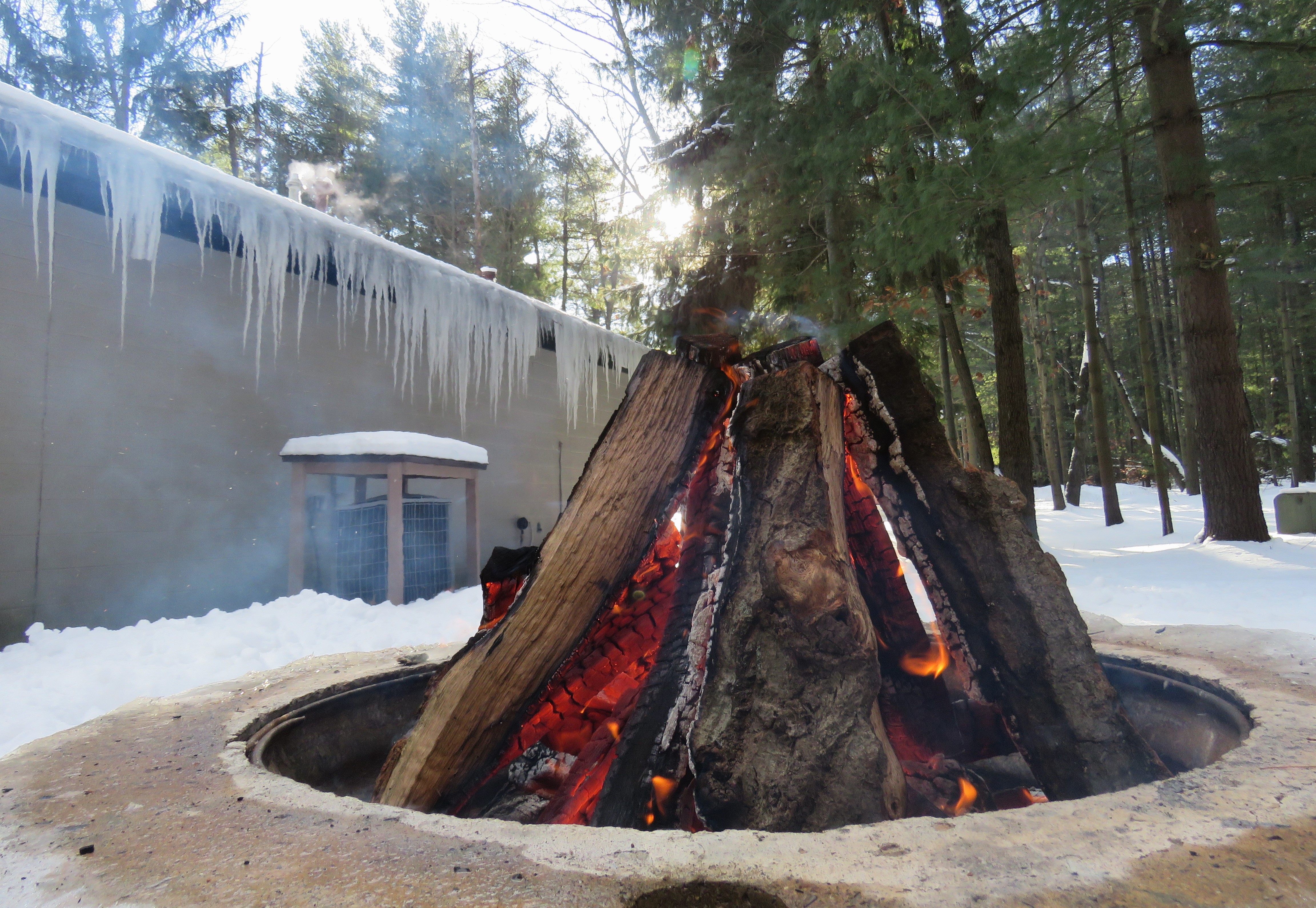