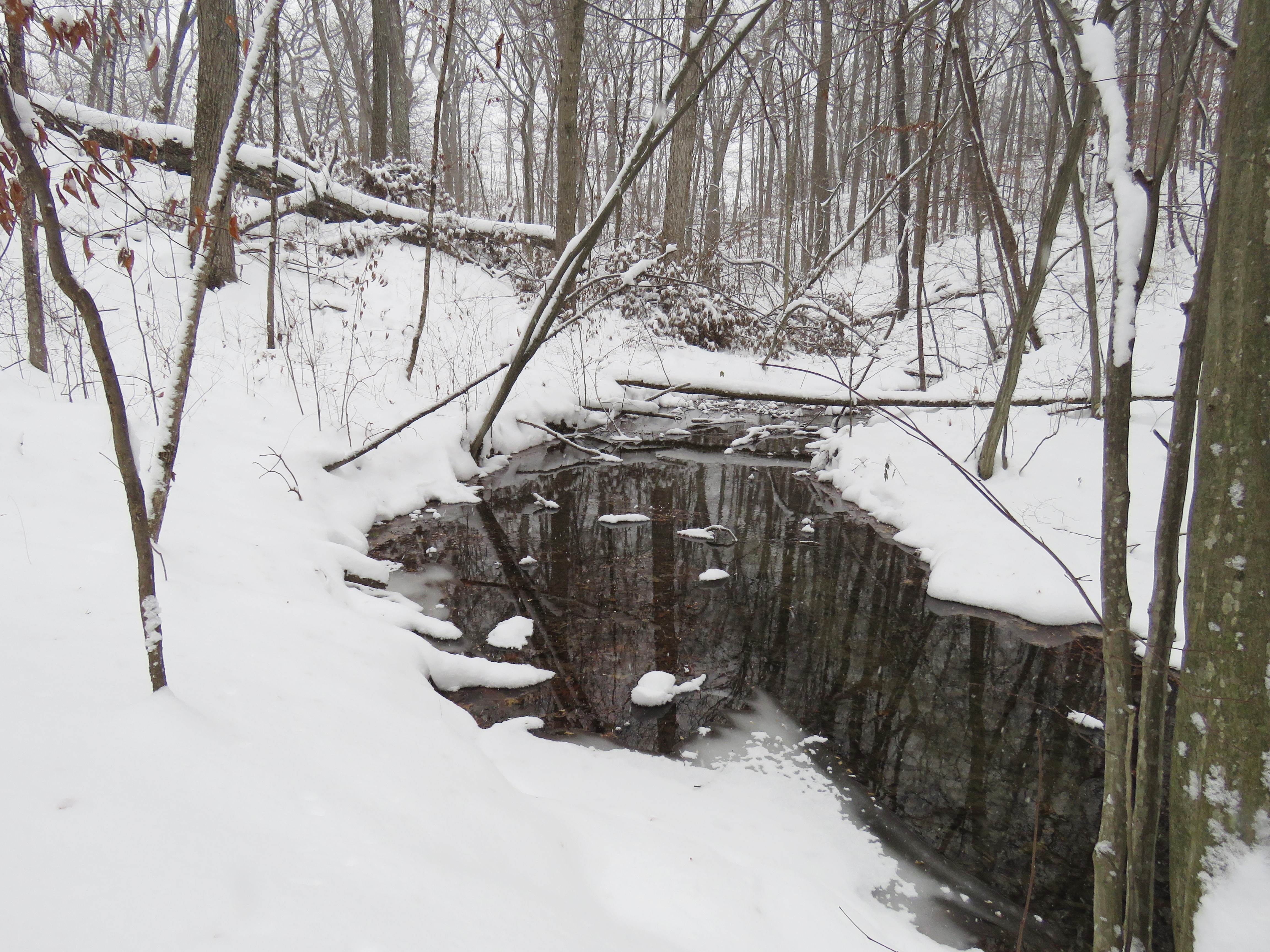 The arrival of the winter solstice opens the way for a new season of embracing the ways of nature on the trails and in the parks that add to the quality of life of Oakland County. The nature that surrounds us becomes even more amazing – we’ve got enticing trails, drifting snow, frozen streams, babbling brooks, crackling ice, whispering winds, and of course, tracks in the snow that help unravel the mysteries of wild creatures living in our midst. If a destination is chosen with forethought, there’s the added benefit of enjoying soothing solitude for hiking, snowshoeing or cross-country skiing on the wilder side of Oakland County. That was my plan last Friday. 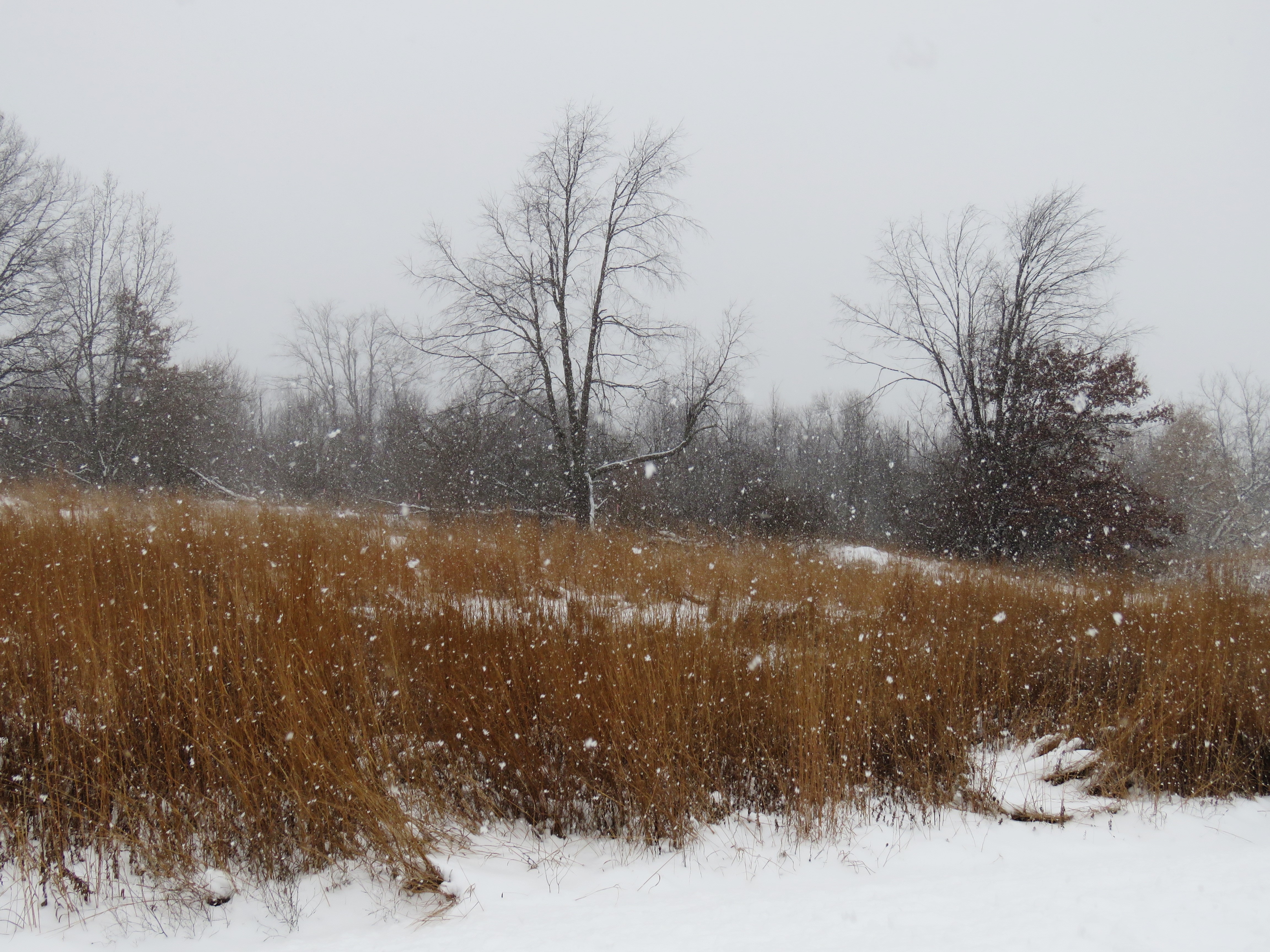 It was a blustery day of wind-driven snow, the perfect stage to muse about the winter solstice, the moment in time when the Earth’s tilt away from the sun is at its maximum, and the sun’s maximum elevation in the sky is at its lowest. The winter solstice marks the shortest day and longest night of the year; it does not signal us to hibernate on a couch until spring. The day after the solstice, Friday, December 22nd, will greet us with a non-detectable smidgen of more light than the day before. Then, ever so slowly, each day lengthens and the nights shorten as Planet Earth continues its elliptical journey around the sun. The National Weather Service has detailed information on the science behind the solstices, including the tilt of the Earth, the seasons, and the relationships between the length of day and temperature. Learn more by clicking here for a better understanding of this moment in our celestial time. 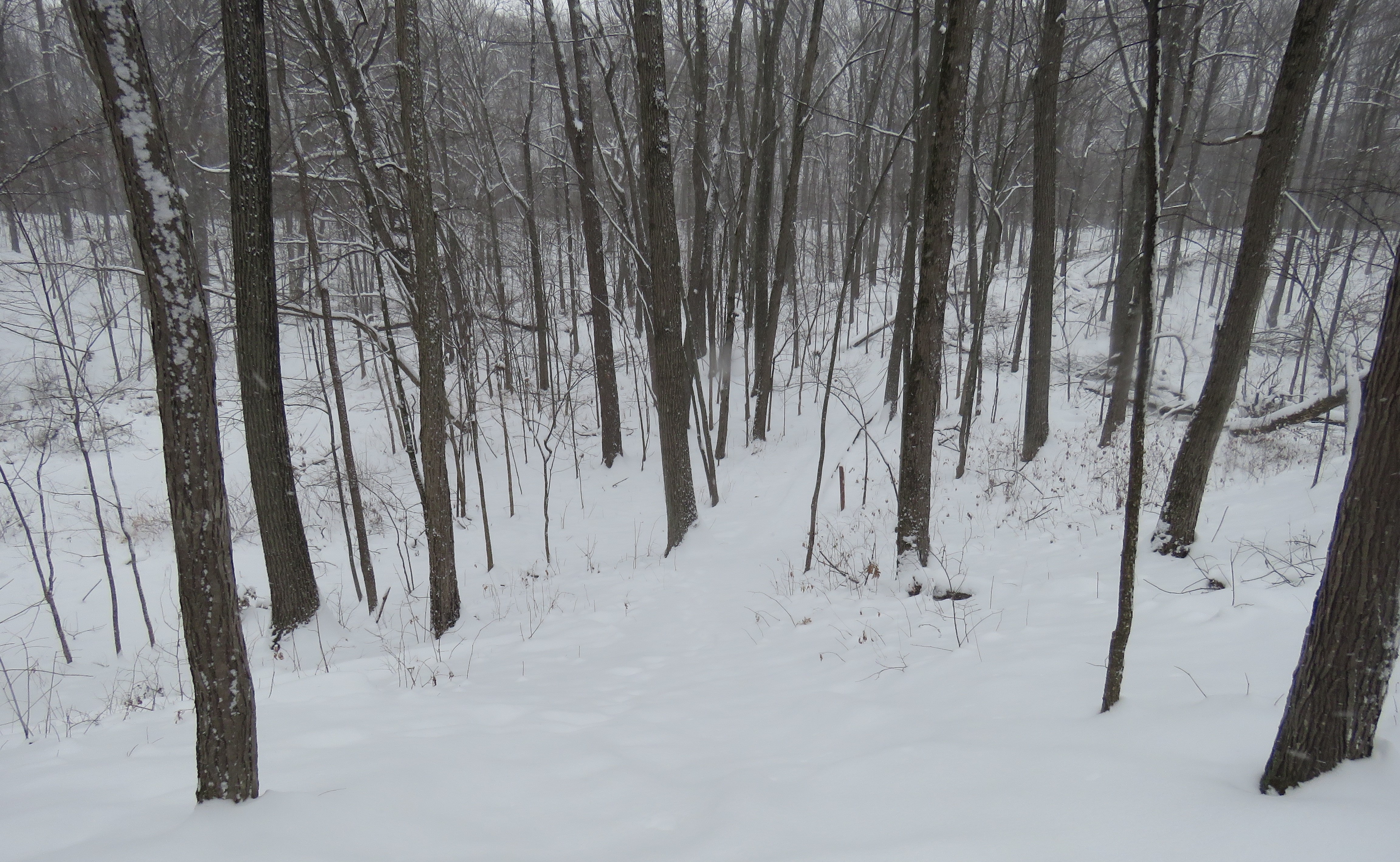 With solstice thoughts in mind, I set out for Seven Lakes State Park, a 1,434-acre park managed by the Michigan Department of Natural Resources (MDNR), located near the town of Holly in the northwest corner of our county. The park entrance is on Fish Lake Road, about one mile north of Grange Hall Road. Here’s how Seven Lakes is described by the Michigan Department of Natural Resources:

“An endless variety of topography and ecosystems form the area called Seven Lakes. Its land was a combination of farmland, rolling hills and forests. About 230 acres of water with several miles of shoreline await the park user. A development group originally purchased the land but they were unable to follow through with their plans and sold the land to the state in 1969. The dam, constructed by the developers, formed one large lake from seven small lakes, historically known as the DeCoup Lake hence the name Seven Lakes State Park.”

The MDNR left out much of the “good stuff.” Seven Lakes bustles with activity all summer and attracts hundreds of fishers, picnicking families, boaters and campers on any given day. That’s not the case now. It’s a generally quiet place during the winter months. The “endless variety of topography”, described by the state is a gift of the last glacial retreat some 12,000 years ago, a time when mastodons, mammoths and beavers as big as black bears roamed our landscape. Snow blankets many glacial features, but the rolling hills created from glacial sediment and the crushing power of a wall of ice that would have dwarfed Detroit’s Renaissance Center are a delight for winter adventurers who are comfortable wandering into one of the wilder areas of our county. 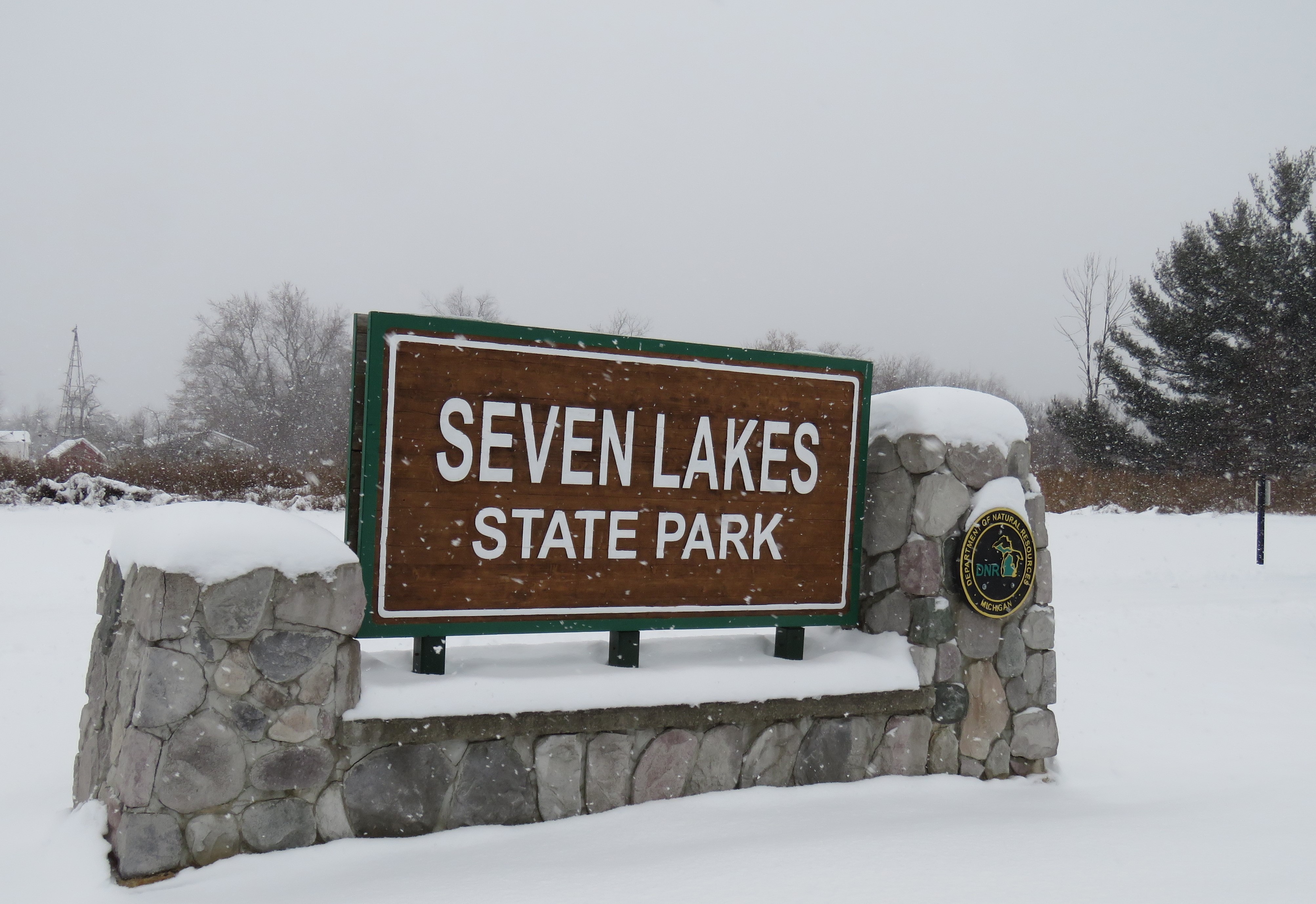 Steady snow was falling as I entered the park. Except for frozen apples that still clung to trees and an assortment of late season berries, the landscape was a muted mix of white and shades of gray. I was not quick enough with my camera to capture the image of a buck moving through a field of big bluestem in the restored prairie near the park entrance, but I did photograph a prominent sign near the entrance advising all park visitors that much of Seven Lakes is open to hunting. I followed a park ranger’s plow truck along the main road until I turned off for the Dickinson Shelter parking area to begin my trek. Mine was the only vehicle there, and I encountered no one during my nearly three hours of exploration.

A hike at Seven Lakes in winter should bring three “S” words to mind: Solitude, Safety and Situational Awareness. Although I sometimes hike with others, a winter hike can be a gift of solitude if attention is paid to situational awareness. I strapped my bright orange safety vest onto my day pack, a well-stocked piece of gear that always goes with me on backcountry adventures. What’s in it? Everything I might need for an unexpected night out, or a trailside emergency.

There are many locations in the park where the seven mile trail system that meanders over hills, through woodlands, across meadows and along the edge of lakes and wetlands can be accessed. Although the primitive trails are easy to follow in summer, they can be challenging in winter, especially during a blowing snow event. There are sign post trail maps along the way at trail junctions to indicate your present location. However, as was the case during my hike, snow obscured the actual trail in a few locations. Winter bushwhacking can be dangerous. In addition to the named lakes of the park, there are small vernal ponds and wetlands that are already iced over and snow-covered tripping hazards to the unwary. My planned 2.1-mile hike along the Green Trail Loop became over three miles when blowing snow totally obscured the trail. I opted to backtrack to a known destination after taking a short break at a hunter’s abandoned deer blind created of branches. I was surprised by how quickly snow covered my tracks, but I knew I was on the right course by the shape of the terrain and by taking an occasional glance at my compass. 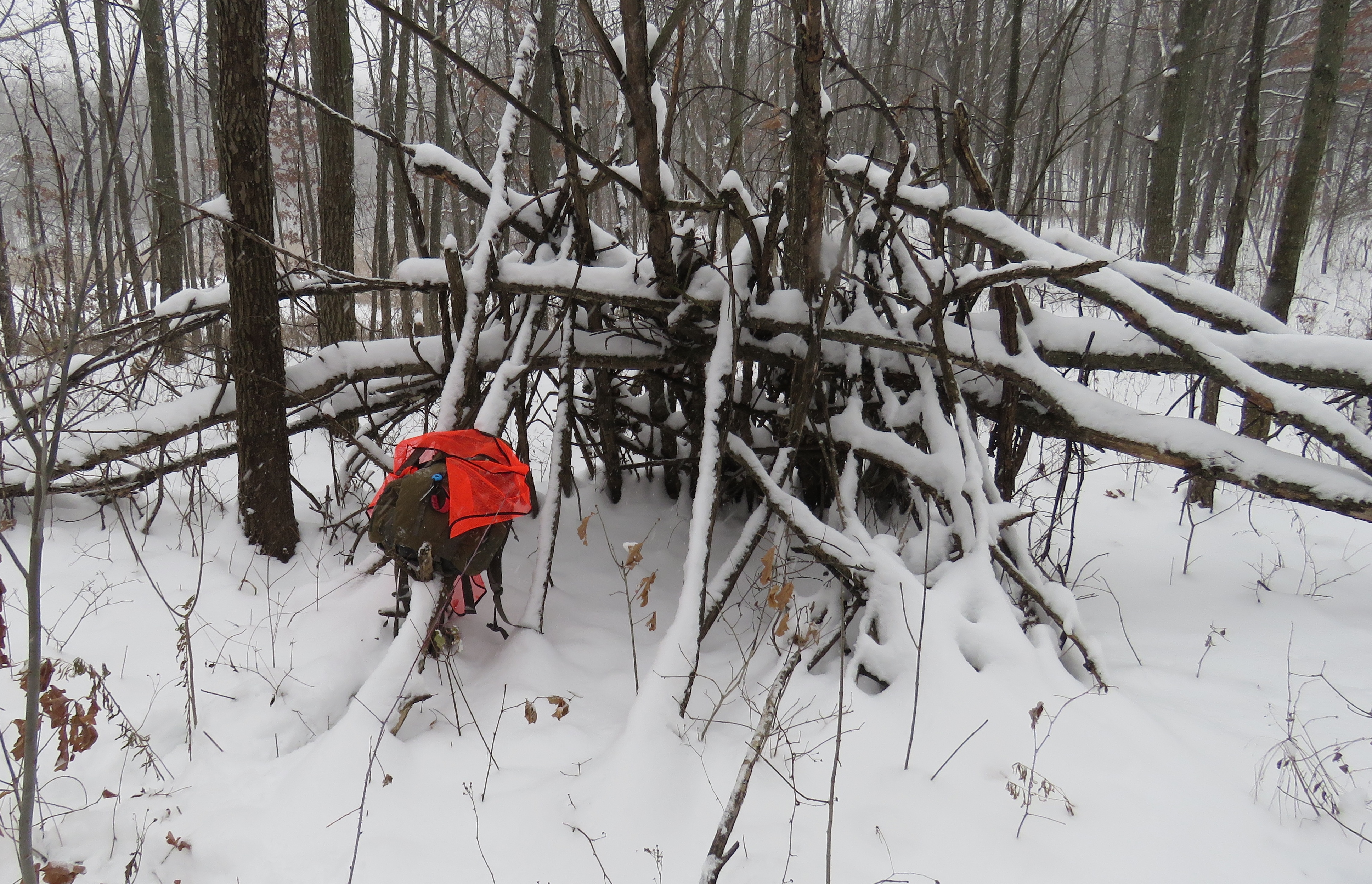 Replicating the journey of someone else is not always wise, but for a first timer that is savvy enough for a winter hike in a challenging environment, I suggest my route: the Green Trail Loop. It’s fun. It embraces creeks and lakes, and there is a health benefit too: lungs and legs will get a workout. It also gives opportunities to easily connect with the entire trail system. This map shows the trail, but it does not indicate steep ascents, trailside hazards or vernal ponds. 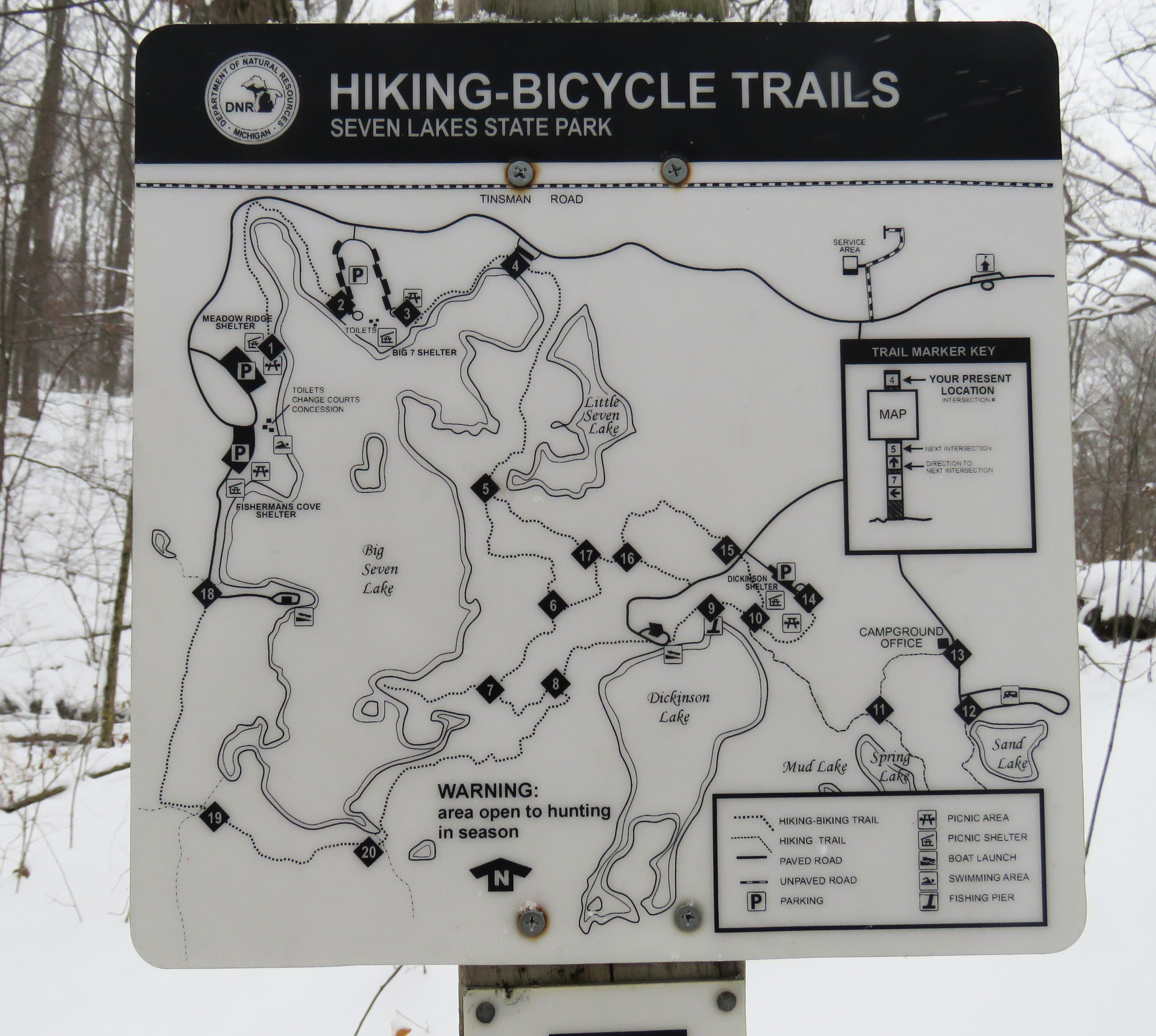 Walk slowly and discoveries can be made. The aptly named Turkey Tail (Trametes versicolor), a colorful common tree fungus, appeared in many locations. Pileated Woodpecker carvings were noted on some large dead trees, while poison ivy vines clung to many trailside trees. Poison ivy is easy to identify in winter even after all the leaves are gone by looking for their fine, reddish aerial rootlets. Another situation awareness note here: Poison ivy remains potent during the winter.

In the spring of 2016, the Michigan Department of Natural Resources conducted a carefully planned controlled burn to combat invasive plant growth. I took notice of a few charred stumps that remained, standing out clearly against a world of white. While it will be at least six months until I will munch on wild black raspberries, their dormant stalks were easy to spot in small clearings in the burned area as well. In winter they are coated with a waxy bloom that gives a blueish hue to the purple stem underneath. And down by the lakeshore, bright red winterberries reminded me that nature is already planning for spring.

For now, spring can wait. I look forward to wandering through winter, and celebrating the warmth of adventure with another wilder side hike on the dawn of the first full day of winter, Friday, December 22nd. I also know it won’t be long until we hear grumbling about the darkness of the dead of winter. The “dead of winter” is an oxymoron. Winter is never dead; it only looks that way to those who don’t explore the great outdoors of the wilder side of Oakland County. Join me on the trails!