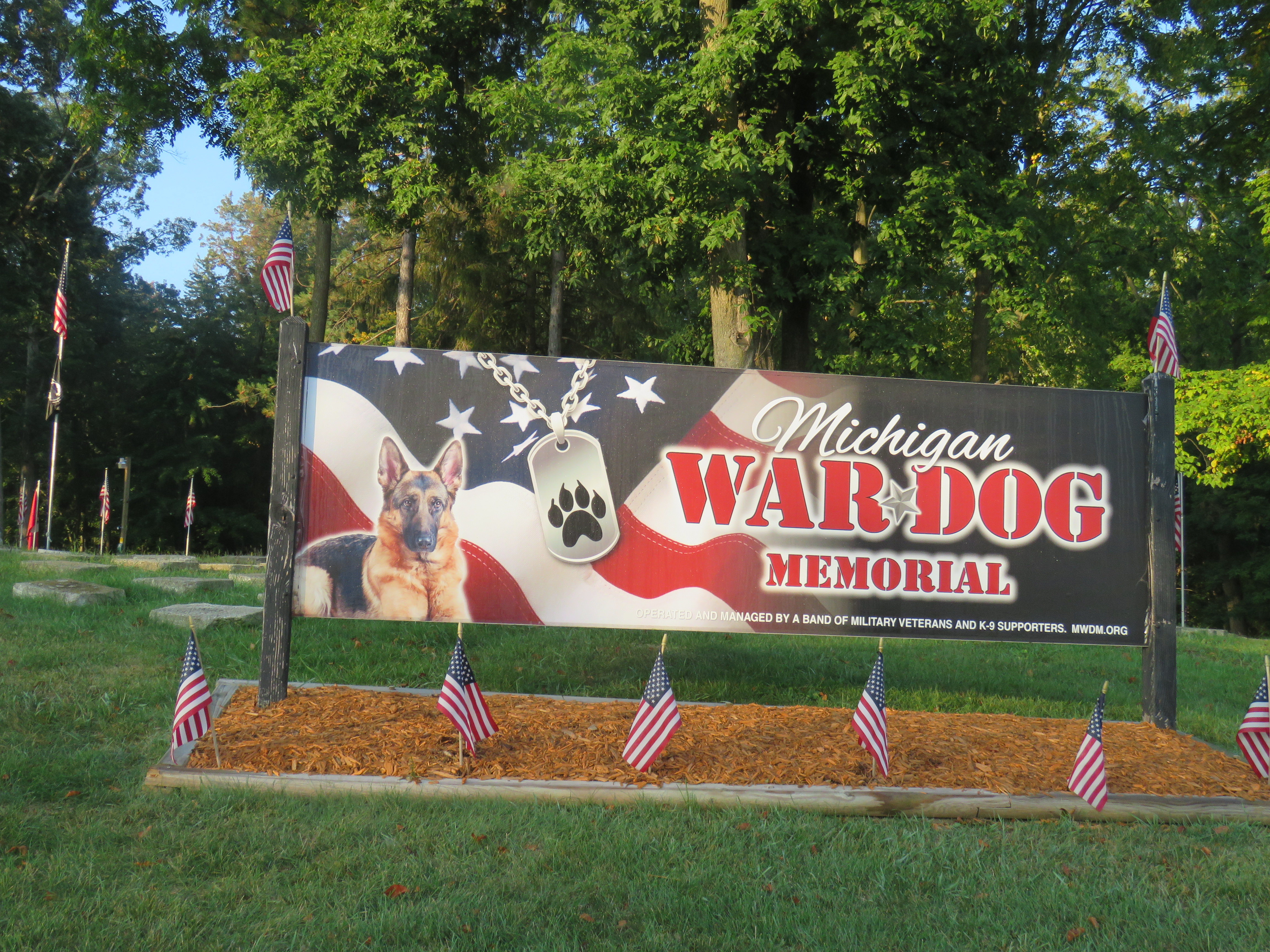 Lyon Township might well be considered the southern gateway to the 900 square miles of Oakland County. The township has deep-rooted history in the growth of our county and state; some aspects of that history are well-known, and some are not. This is the tale of a small roadside greenspace on the southwest corner of Milford and 11 Mile Roads, a lesser known story from the wilder side of Oakland County. That site was once known as the Happy Hunting Grounds Pets Cemetery and is the final resting place for several thousand pets and some farm animals. The site also hold the remains of some historic pets, including a parrot that was on Admiral Dewey’s Spanish-American war flagship, and Blizzard, one of Admiral Byrd’s sled dogs from an Antarctic expedition.

That walkable, open to the public, historic cemetery is partially shaded by a canopy of mostly large oak trees, and is now known as the Michigan War Dog Memorial. It has special significance for the Oakland County Sheriff’s Office, and holds a high degree of reverence for everyone that has an appreciation for dogs, especially Military War Dogs, Service Dogs and Law Enforcement K-9s.

I arrived on site last week a few hours after sunrise to explore the graves, monuments and markers that salute our four-legged veterans before a special afternoon presentation to the attendees of the 2017 Oakland County Heritage Conference by Vietnam War Era vet, Phil Weitlauf, the President and Director of the Michigan War Dog Memorial. A few bumblebees rested on roadside goldenrod stalks and a lone crow cawed as I walked silently towards the main monument. Dappled sunlight filtered through the oaks casting a warm glow on a 16-ton granite monument, a tribute to dogs in military service. 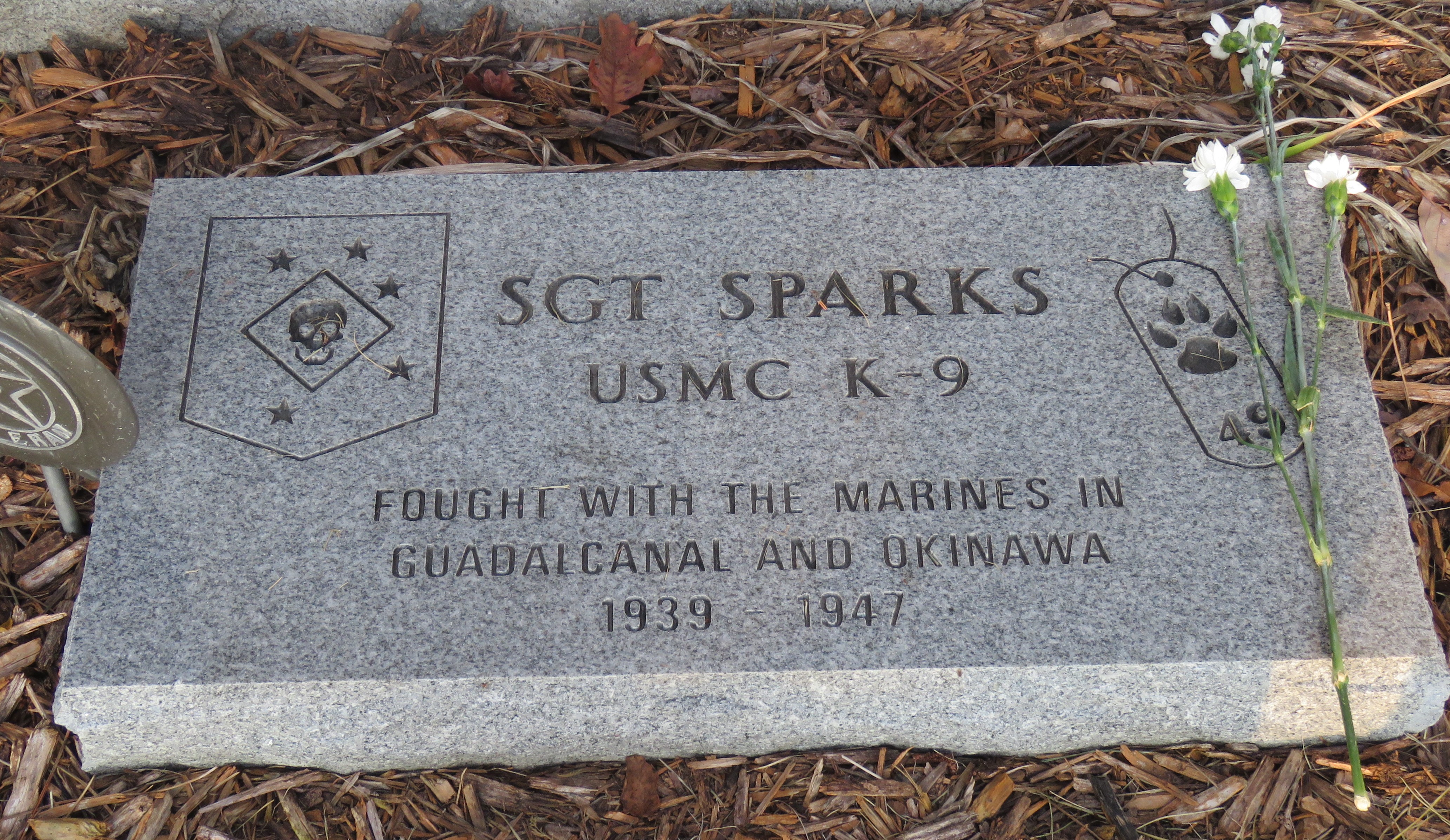 The memories of war dogs that served in WWII inspired pet lovers to contribute over $3,700 dollars to bring the monument project to fruition. Old literature (combined and abbreviated) describes the back story of the 1946 monument this way, “Sargent Sparks was a Doberman Pinscher, a Marine Corps scout and messenger dog attached to the 2nd Marine Raider Battalion 1st Marine Raider Regiment that survived Bougainville, Guadalcanal, Okinawa, and Guam. He was returned to his owner in Rochester after the war and was present at the monument dedication – a year later, someone poisoned Sgt. Sparks near his Rochester home. His master requested that he be wrapped only in a blanket, like so many of his buddies at the beaches and interred at the base of the monument.” 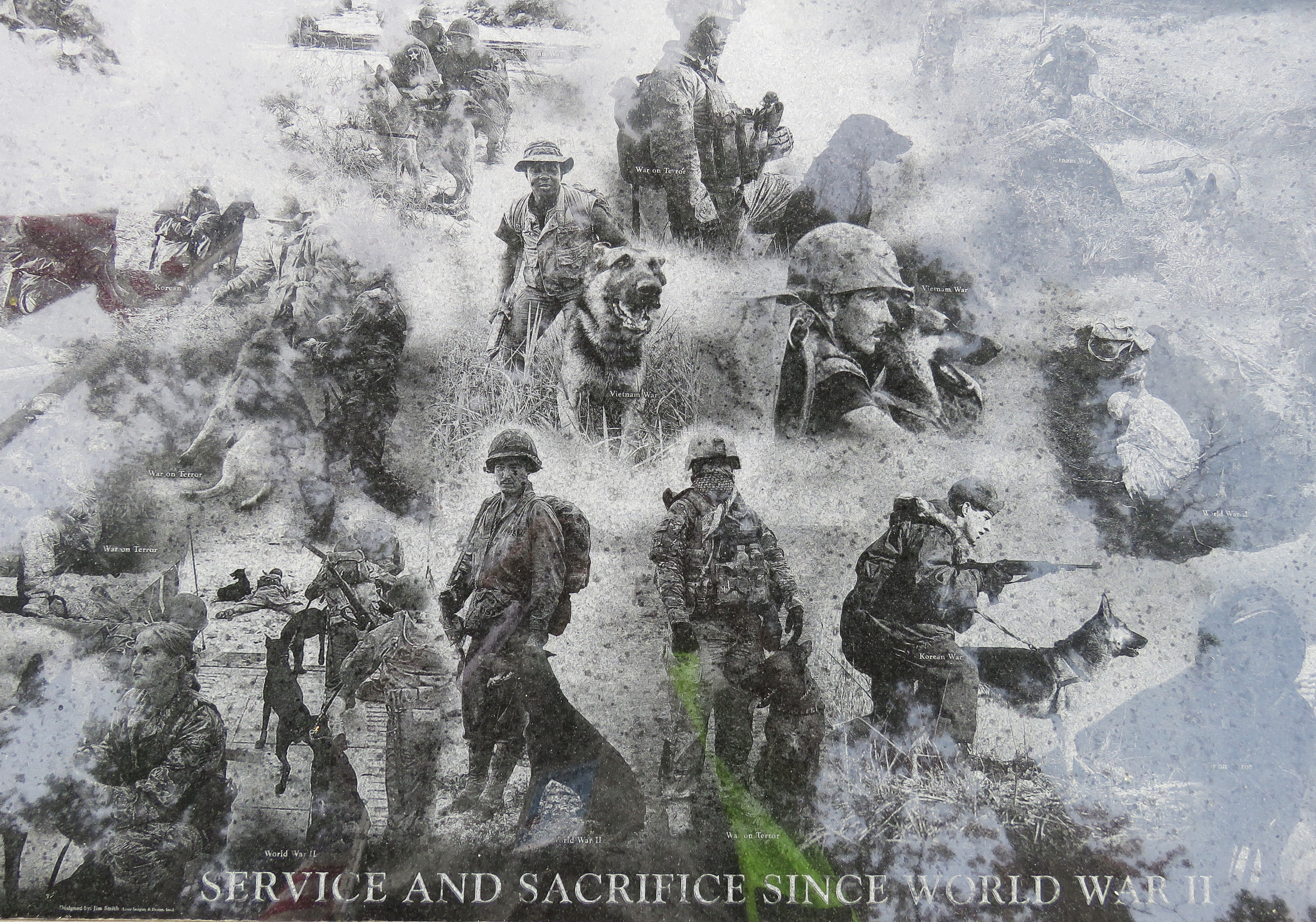 “War Dogs” are now known as Military Working Dogs. In WWI they were called Ambulance Dogs, and at that time were trained to search for wounded soldiers. In WWII their roles were greatly expanded, with some functioning as sentries, others had tracker and scout roles and even delivered messages. The website of the Michigan War Dog Memorial states, “In Korea there were only one War Dog platoon deployed consisting of about 28 dogs. Of those 28 dogs on patrol, thousands of ambushes were averted. Thousands of lives were saved. In Vietnam further disciplines were added to their training: explosive detection and booby traps. According to the Military they saved 10,000 lives during this conflict. In Iraq their main function was detecting IED’s. Their other duties were sentry and road side check points. They continue on duty today in Afghanistan. There are currently 600 teams deployed saving lives every day.” 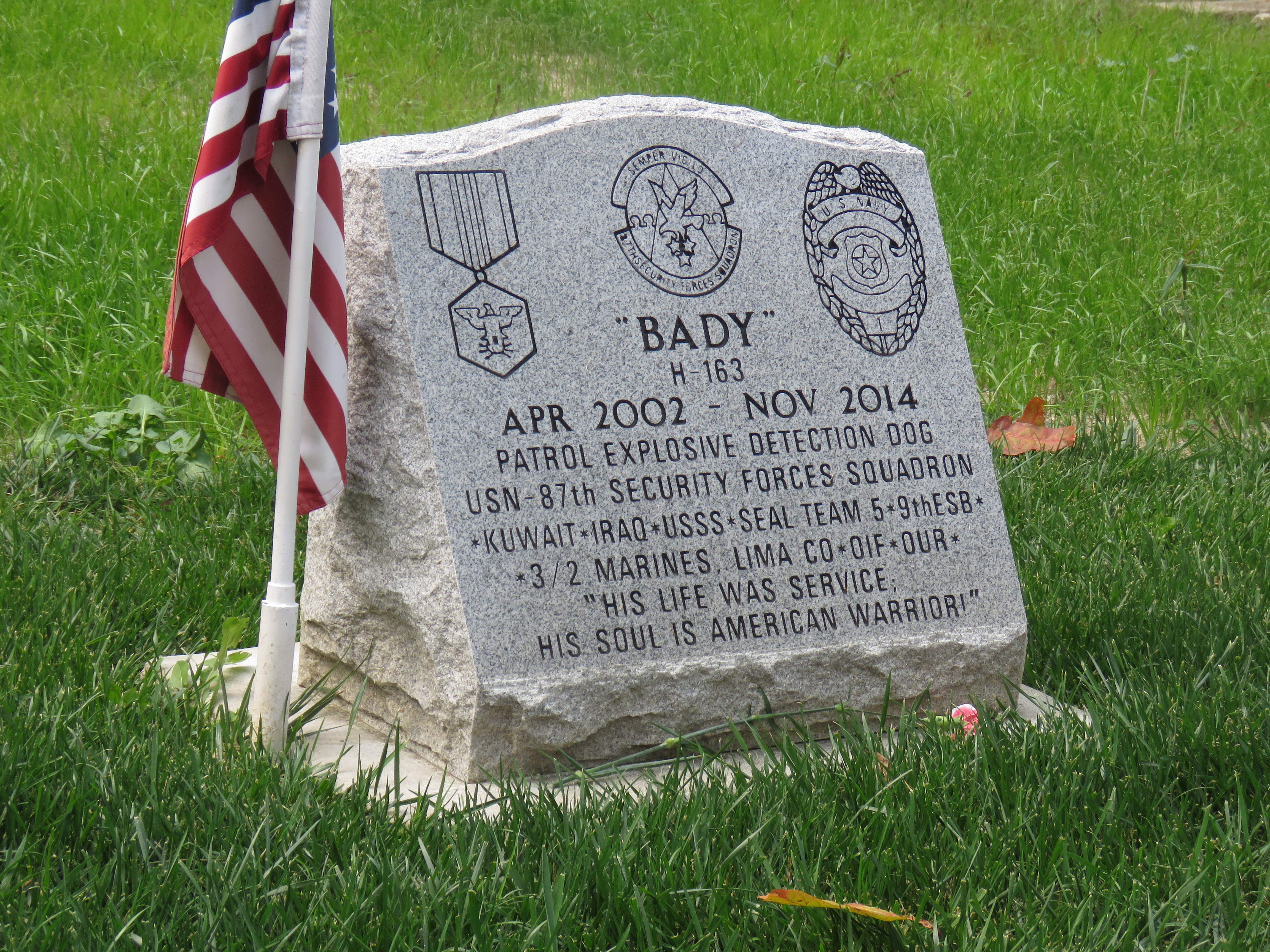 The New York Times reported in 2011 on Cairo, the dog that accompanied the Seal Team that killed Osama Bin Laden. Although much of the training of dogs in Navy Seal Teams remains shrouded in secrecy, the Times quoted Major Wes Ticer, the then spokesman for the United States Special Operations Command who confirmed the dog’s primary functions as “finding explosives and conducting searches and patrols.” An ABC News video gives an overview of the training and equipment the military K-9s receive. 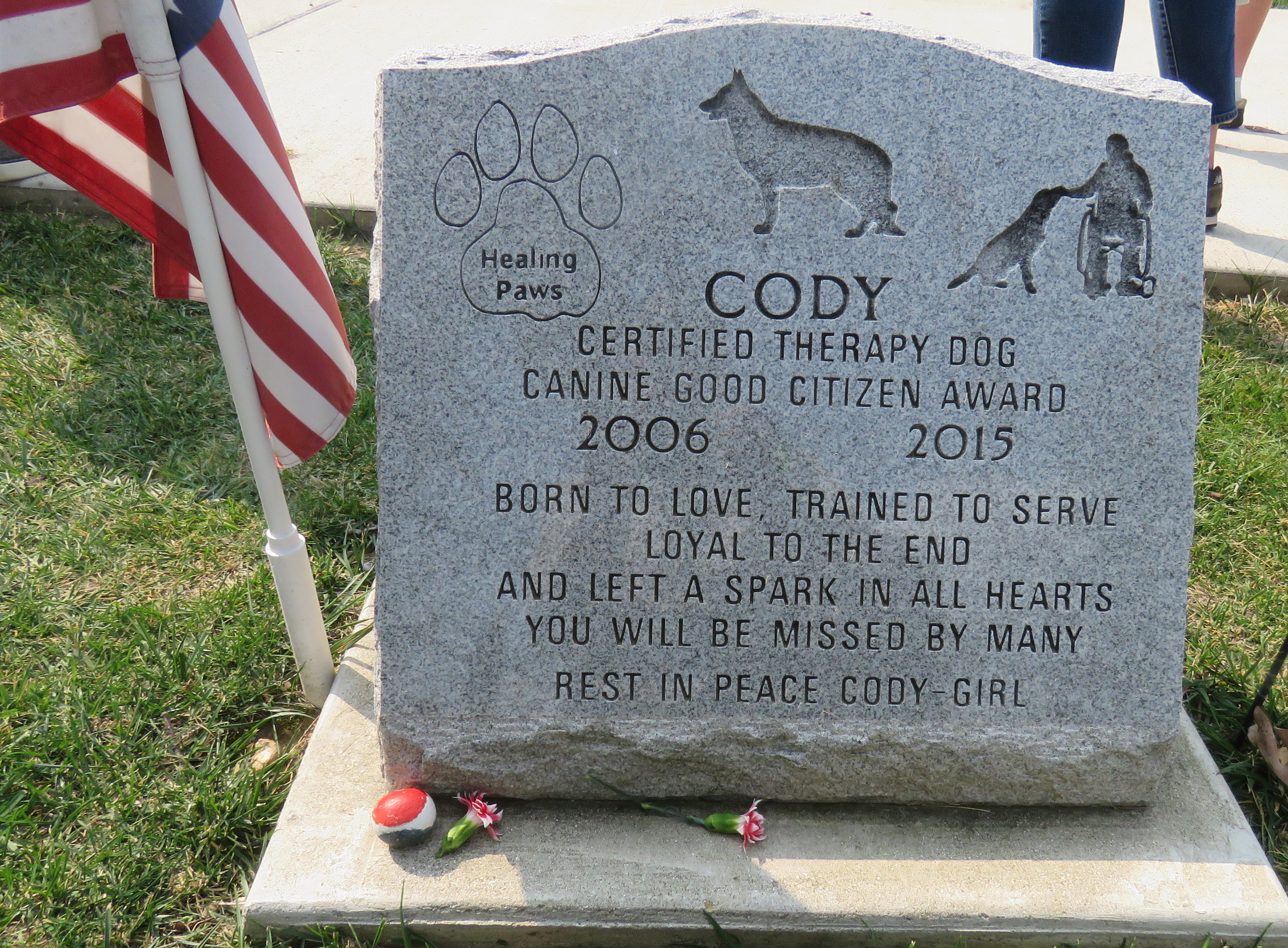 Weitlauf and I talked about the site and he directed me to information of a more personal nature, his summer of 2010. “We were told about an abandoned war dog monument at the corner of Milford Rd and 11 Mile in Lyon Township. I took my trusted companion Cody, a German Shepherd, to take a look. As we arrived at the corner we saw nothing but a heavily wooded area. We parked the car and went for a walk and there it was, a large granite monument with the words “The War Dog.” As we looked around we could see several headstones buried in the foliage and brush. The site was in horrible shape. 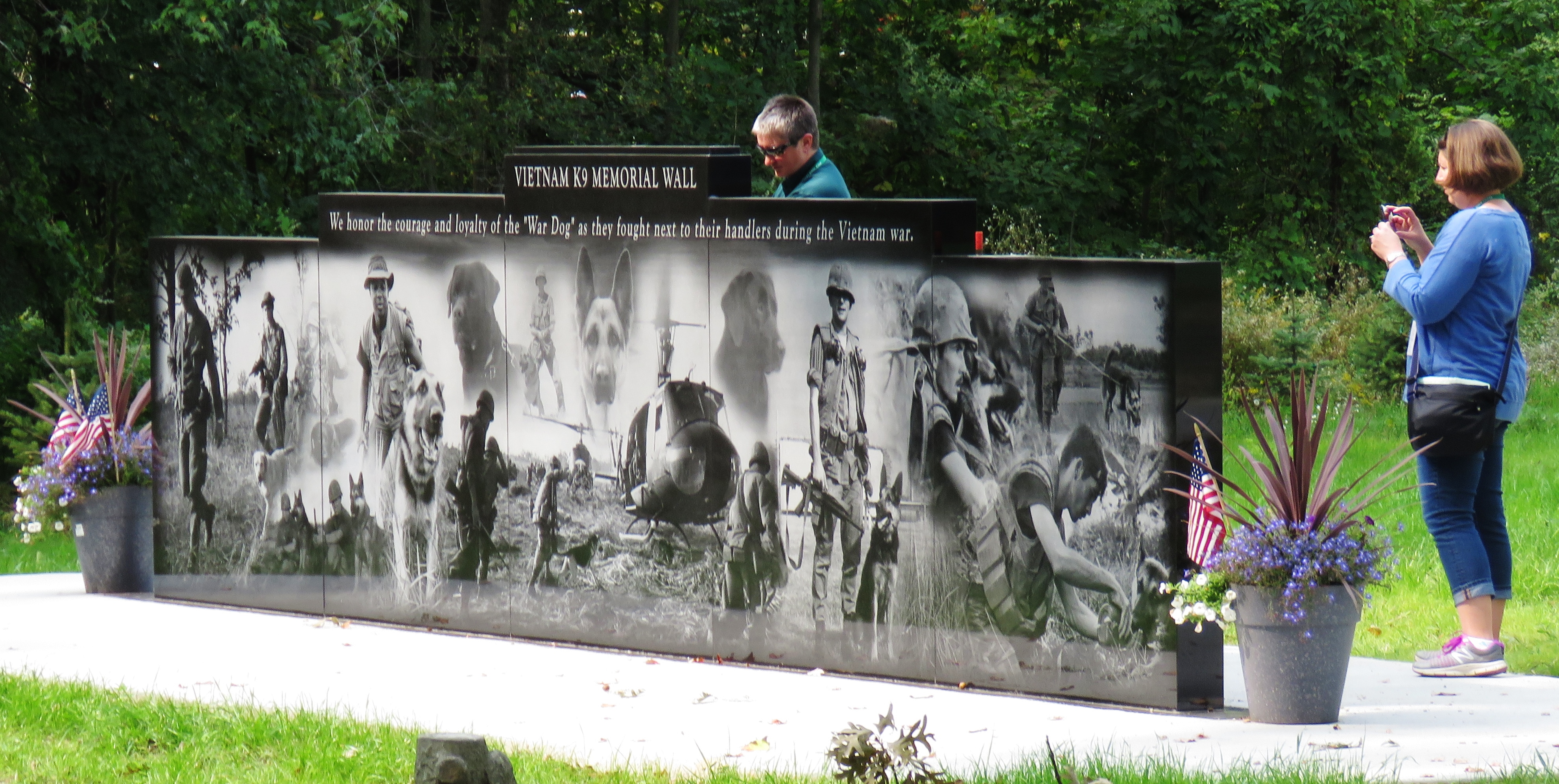 After much work and restoration, including walkways accessible to disabled vets, the War Dog Memorial has transformed into a beautiful, yet somber place that openly reveals some of the tragedy that had fallen on our military working dogs. I walked over to a large black wall about the Vietnam War and was stunned by what I discovered after inquiring about the 4,234 names on the wall: names of dogs. Dogs were trained and deployed to Vietnam with their military handlers. As negotiations brought the war to an end, and orders came down that the troops were going home, the dog handlers were excited about bringing their loved four-legged combat partners home. That was not to be, for our government classified the dogs as “excess equipment”, with orders that they be left behind. Because of their training they could not be let loose or given to the Vietnamese. They were euthanized. 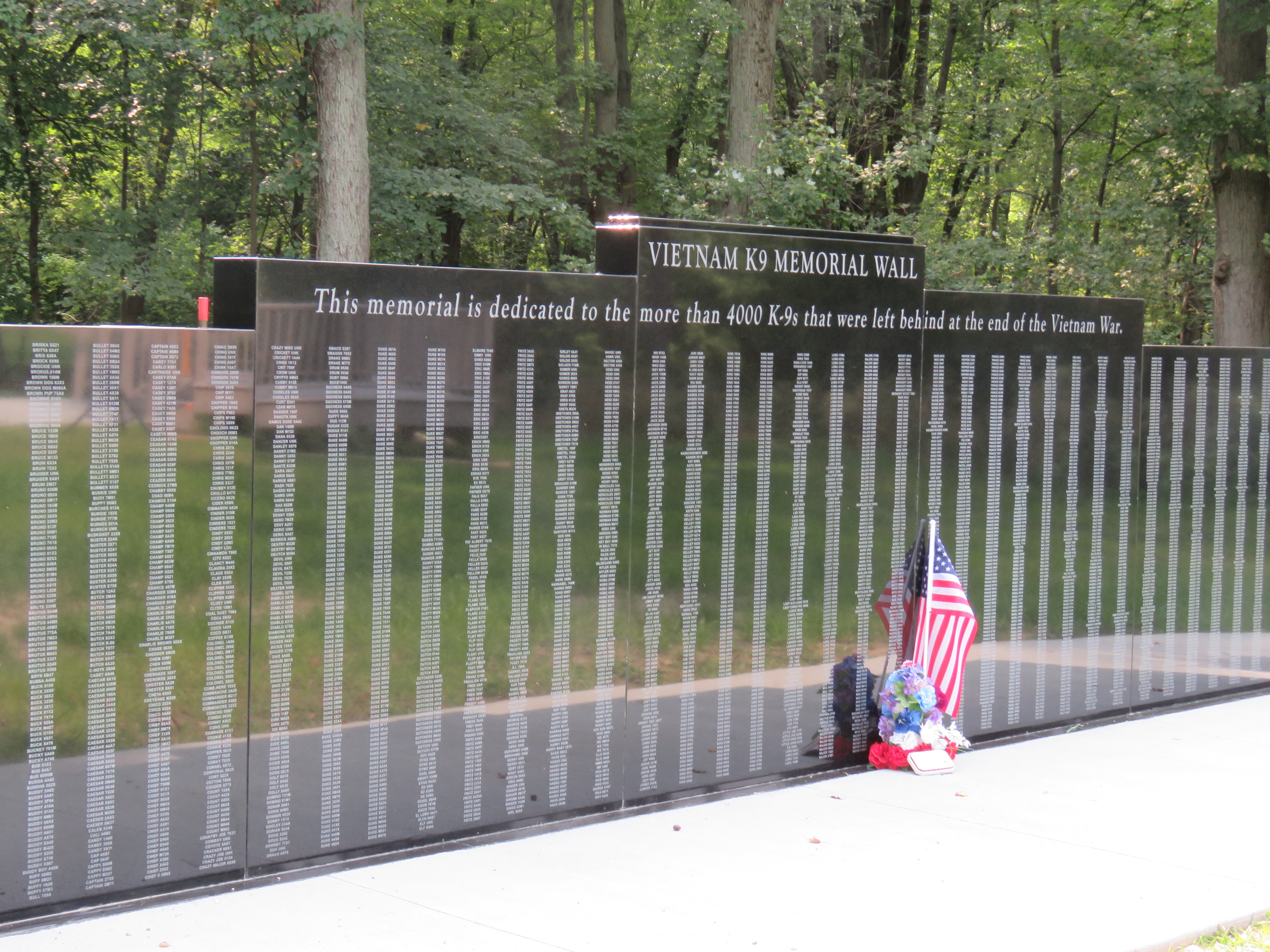 Weitlauf explained, “To honor these well-trained K9s that saved so many lives the Michigan War Dog Memorial erected a Black Granite Wall with all their names and tattoo numbers to recognize them for their service and sacrifice to our country. They will be forever memorialized and will never be forgotten.” I ran my hand over the wall and easily imagined the pain, anger and intense sadness the handlers and other soldiers felt. 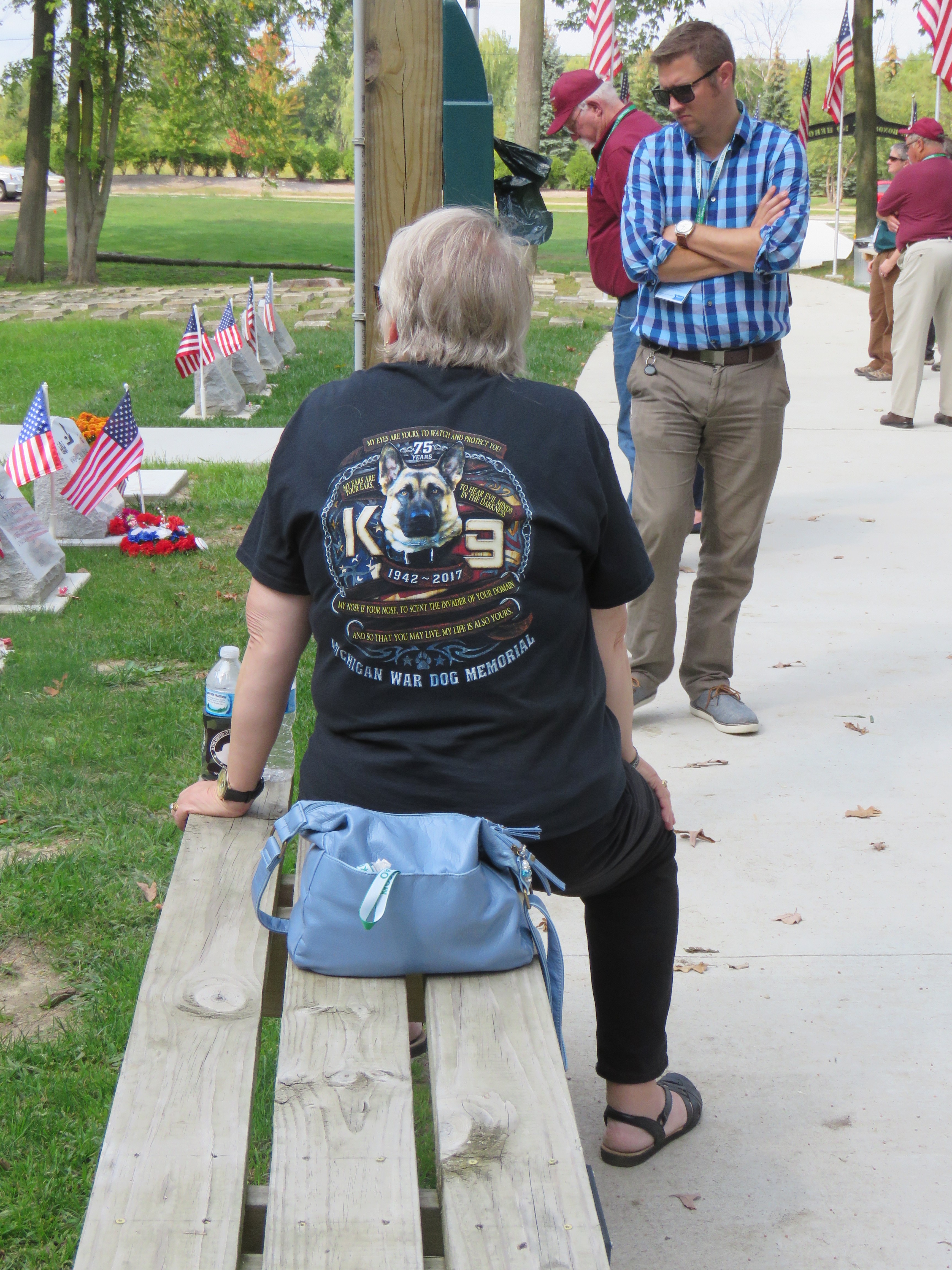 That will hopefully never happen again for in 2015 President Barack Obama signed a bill into law that guarantees the safe return of all retired military dogs to the United States after serving abroad. The Washington Times reported at the time, “The American Humane Association estimates that a military dog saves between 150 to 200 service members during his tenure by detecting improvised explosive devices and hidden weapons caches. Upon return from combat, these animals, if given the chance, often continue to protect their humans and help them transition back into society.“ 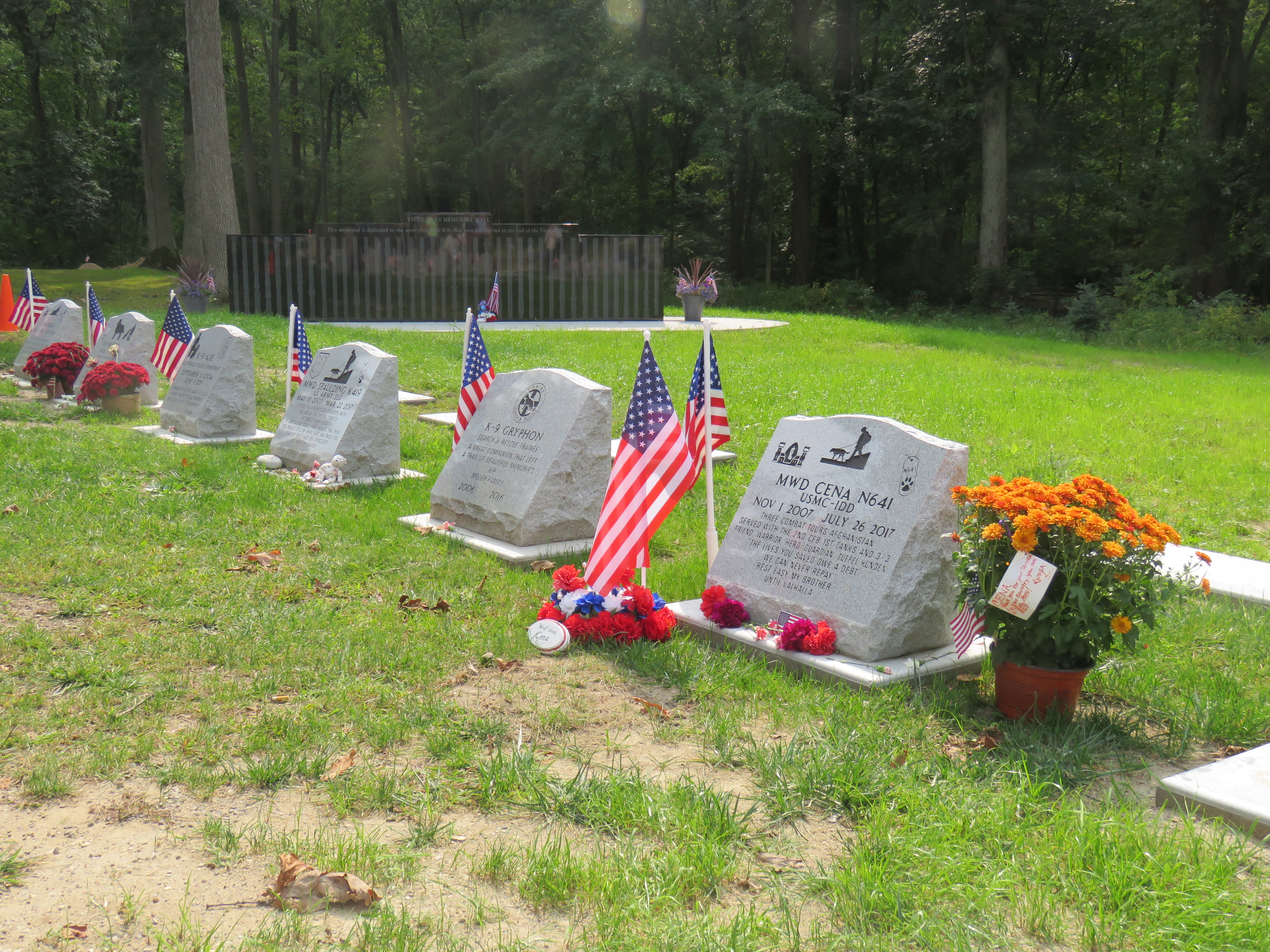 “The bill will ensure that our four-legged veterans will finally have their chance to come home and live a comfortable, quiet life, hopefully with a handler they deployed with or a fellow veteran,” retired Marine Corps Lance Cpl. Jeff DeYoung, who was reunited with his war dog, Cena, said in a press release after Obama made it law. “These dogs have so much love to give…it’s time we show some in return.”

I walked along the edge of the woods near the Vietnam War Dog Memorial and listened to the wind rustle the leaves, and the hum of insects that signaled the end of summer. Other visitors at the presentation gathered in small groups to talk. I sensed a mixture of pride, honor and intense sadness among our Heritage Conference gathering, especially from those that learned about the Vietnam Wall dogs. A red squirrel descended from a lone white pine amidst the oaks, and scurried across the ground drawing my attention to a wooden board on a concrete foundation not far from the entrance arch. The hand-written letters “O.C.S.D. K-9 Memorial Wall” drew my interest. I assumed correctly that it referred to the Oakland County Sheriff’s Office and so after returning home I contacted Weitlauf again for more detail. He wrote back, “The Michigan War Dog Memorial will be donating a granite monument, six feet by three feet, listing all the Oakland County Sheriff’s Office K9s that have passed since the conception of the Unit. This is our way to show our respect, and honor them for their sacrifice and service to our county. We plan to have it displayed in the next six to eight weeks. The MWDM also recently donated a protective vest. They have 15 K9s but only had 14 vests when we talked to them. Now all their dogs are protected.”

I thanked him for his remarkable efforts and told him about the “Wilder Side of Oakland County” blog, and my connection to Oakland County and asked him about the future of the site and its funding. He explained, “The MWDM is the Arlington for K-9 heroes and offers our service of full ceremonial burials for K9s that pass from the Unit at no cost, including the headstone. This allows their K9s to be memorialized and never forgotten. If any of your blog readers would like to make a donation to help us off set our cost it would be appreciated. They can go to our website and either mail a check to our mailing address, or donate through the website’s donation tab.” 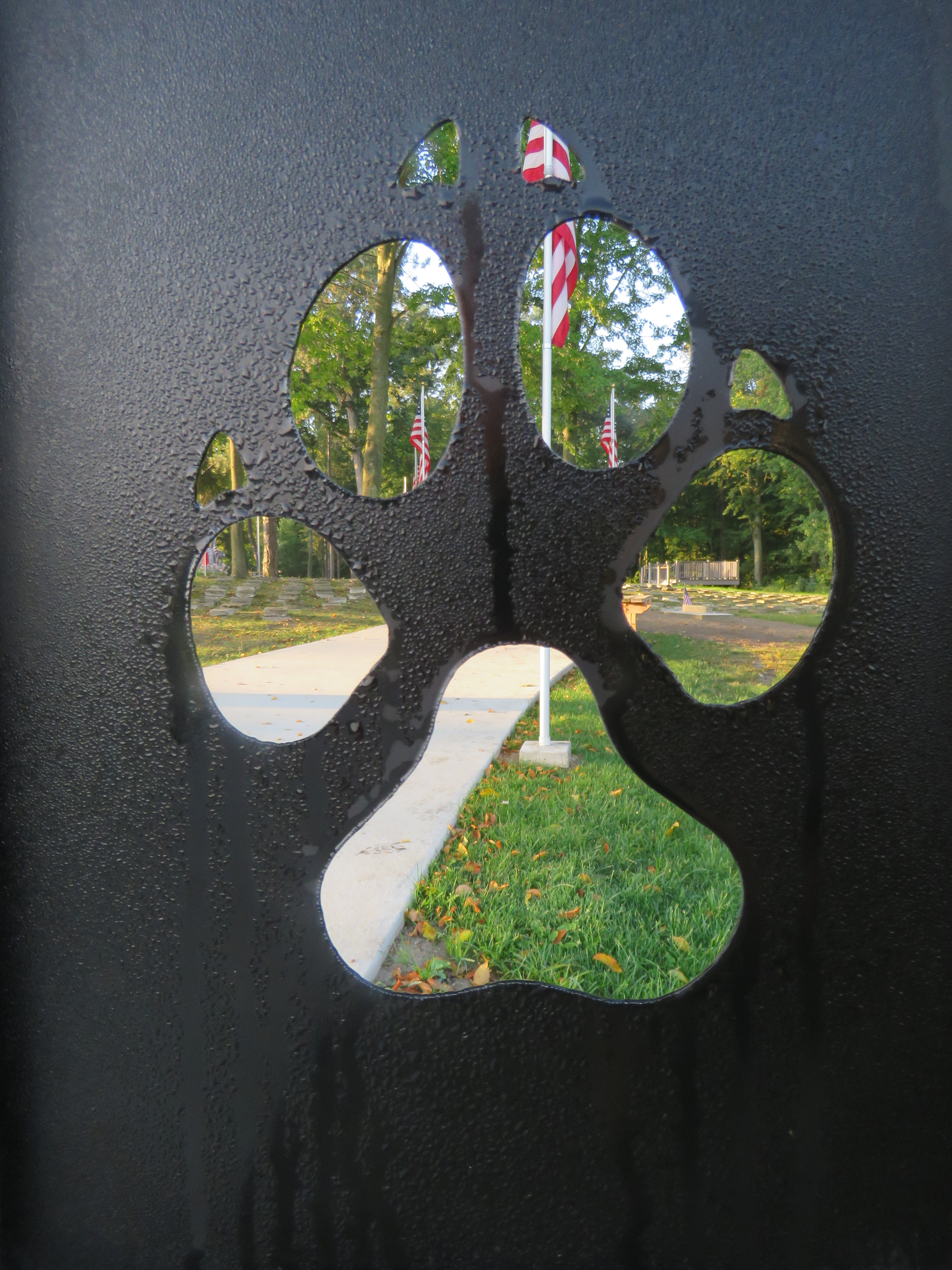 A week has passed as I write these words and I find myself still thinking about that very different day exploring a historic, but not forgotten section of the wilder side of our county. Today, my check goes in the mail.