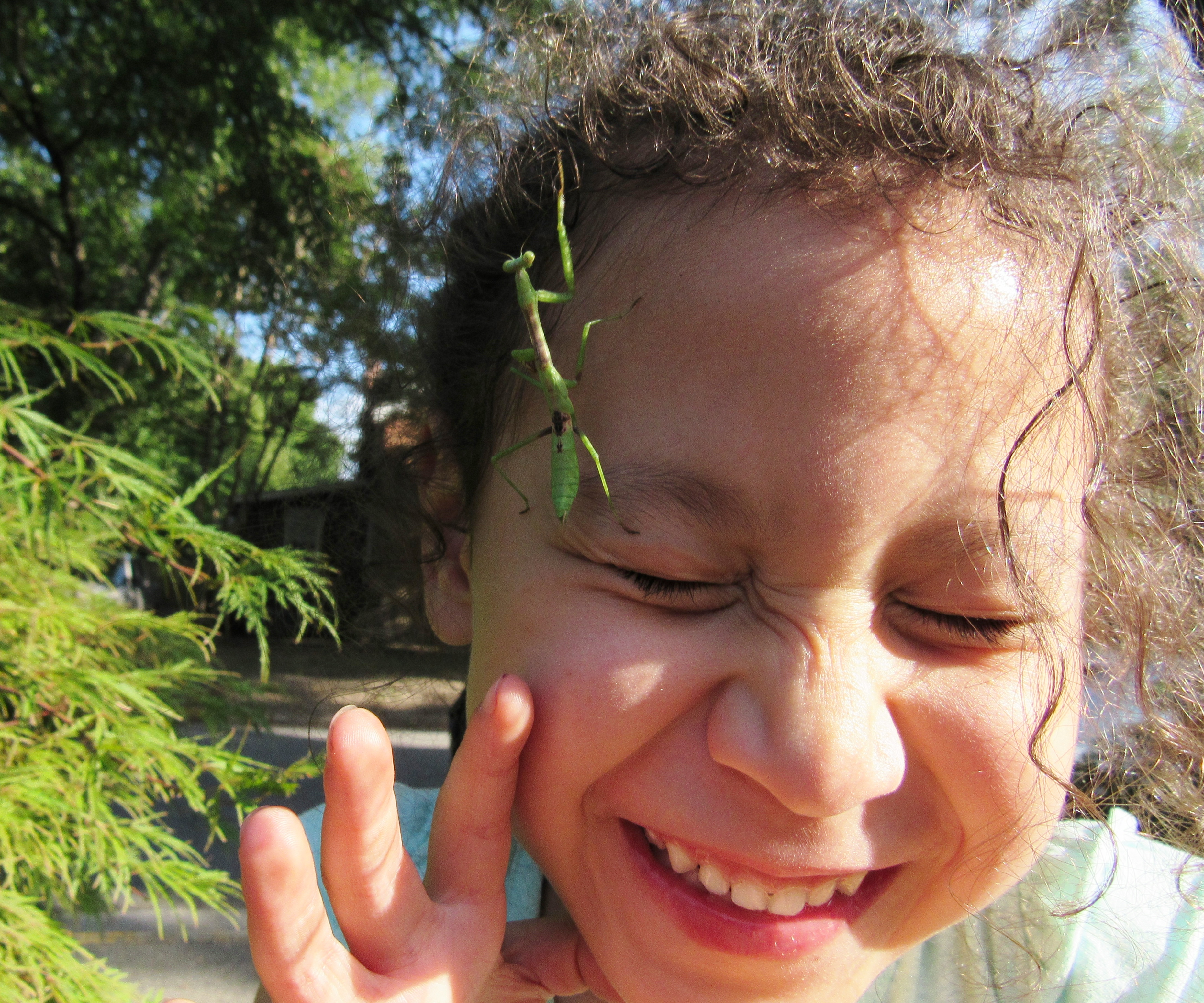 Summer has started with a sizzle and environmental conditions are excellent for a creature that many kids and adults love: the Praying Mantis, an odd-looking insect that has walked the earth since the Cretaceous Period. The fossil record confirms some evolutionary changes occurred over the past 100 million years that added to their success as the ultimate modern day hunting machine: most noticeably those efficient prey-grasping spines on their forelegs. 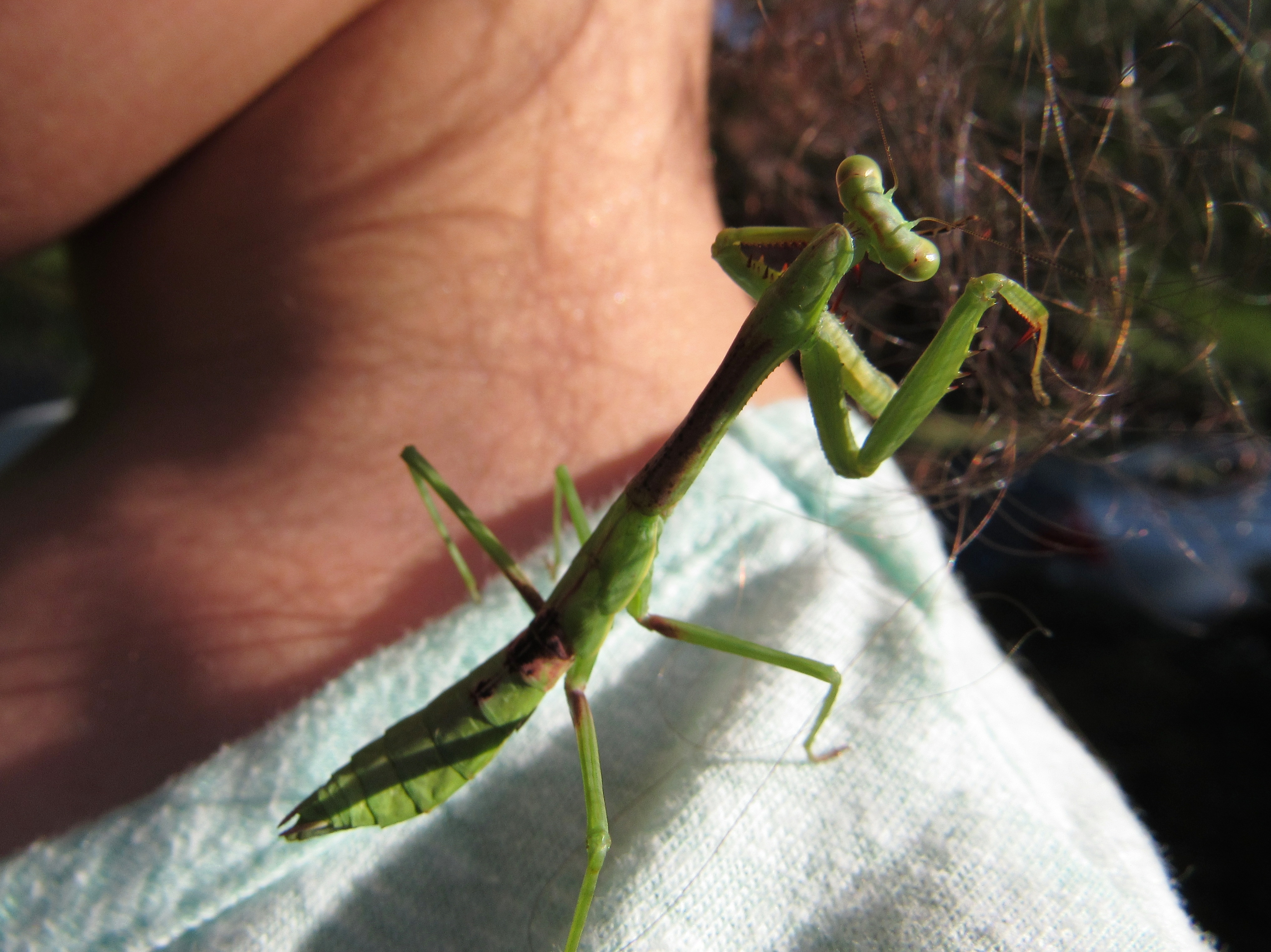 They are one of the most fearsome predators ever to stalk Plant Earth. They may be lurking in your vegetable garden right now, just waiting for the perfect moment to strike, or they may be stalking the edges of hiking and biking trails with ambush in mind. Their forelegs have sharp spines; call them spikes or tiny spears if you wish. When the time is right they position for the kill and lunge with lightning-fast speed. The prey is grabbed and impaled with those deadly forelegs and then consumed while still alive. In spite of all of this, they are cute. 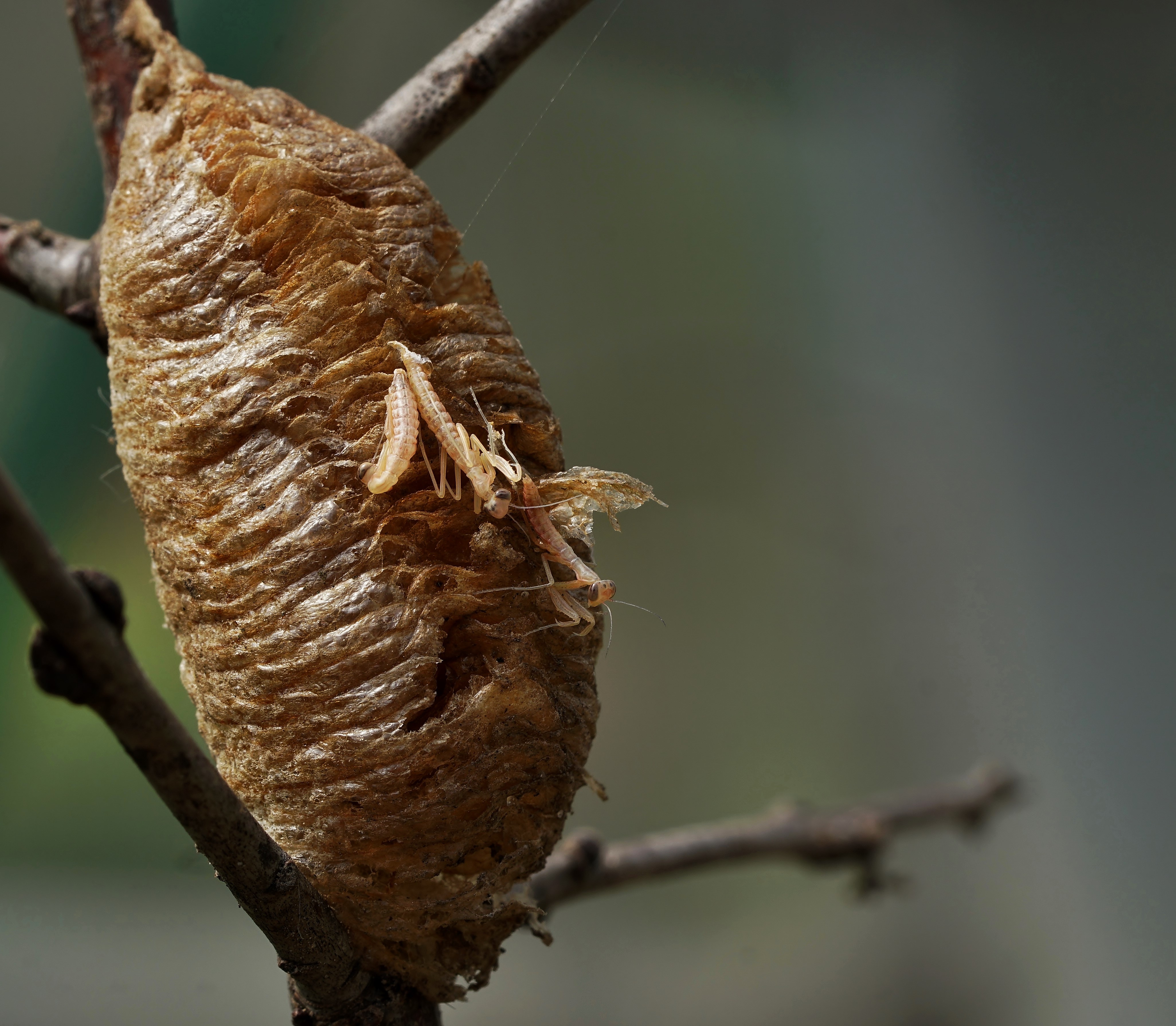 The lifecycle of the praying mantis is very much like that of many other insects: with three stages known as incomplete metamorphosis. It starts as an egg, then it is a nymph, and then finally an adult.

In autumn the female praying mantis deposits her eggs, sometimes hundreds, on a twig in a location that provides a degree of coverage. She then secretes a strange foamy substance that resembles brown Styrofoam, which quickly hardens. This odd-appearing ‘egg case’  blends rather well with the twig and is properly called an ootheca.

Tree leaves fall, snow swirls, and months past by. June arrives and our ravenous praying mantis nymphs work their way out of their ootheca and see the light of the world for the first time. They appear looking just like miniature adults and are independent on emergence with an excellent appetite and no time for family bonding. The first meal of many of the hungry little ones is a sibling. These first moments of life under the sky are rarely witnessed, but nature-savvy adults who notice their winter egg case keep a watchful lookout.  Wendy Pellerito is one of them. She is master of capturing tiny worlds of nature hidden in our midst. 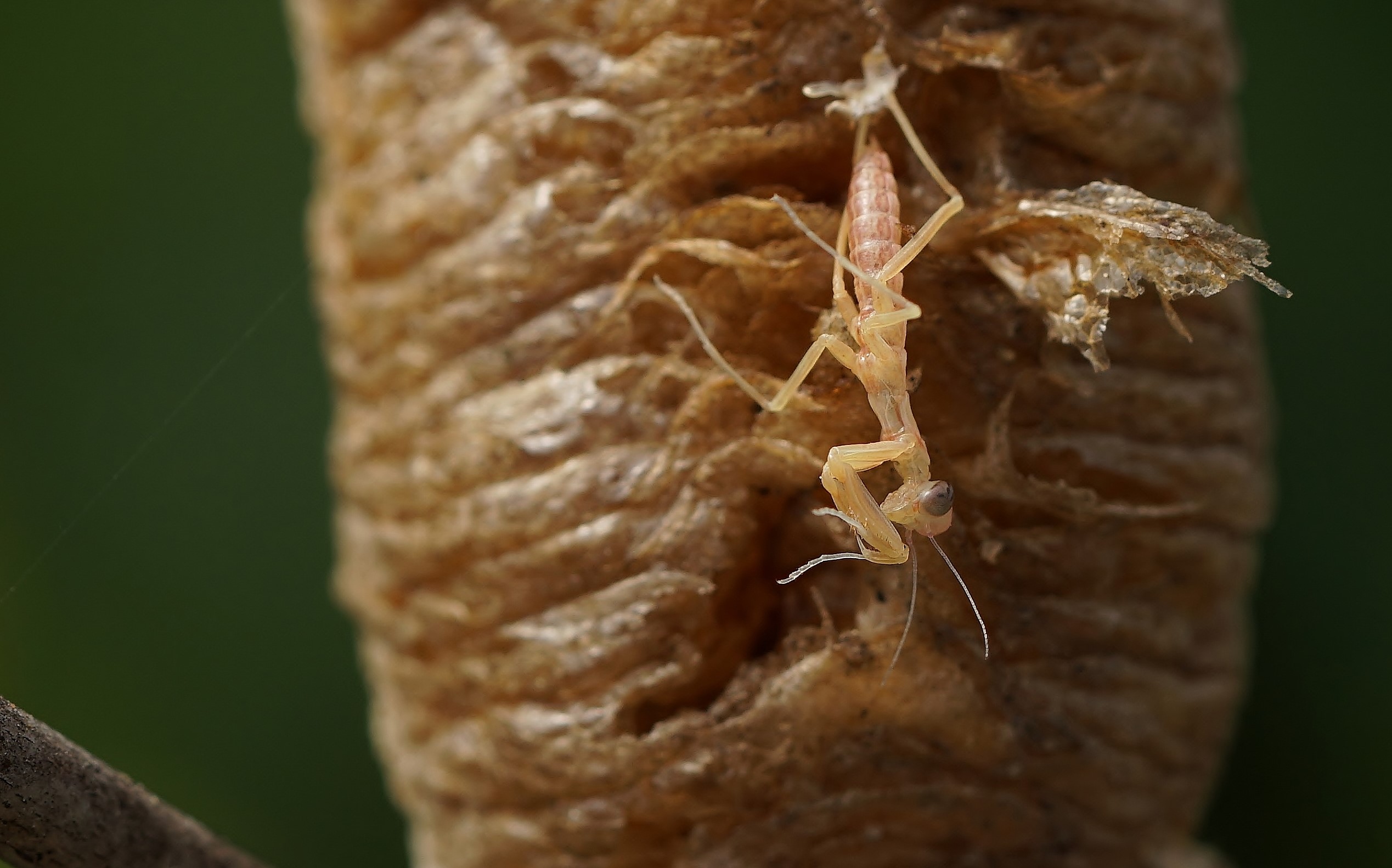 Pellerito witnessed a local emergence in the middle of June. Her photos of the nymphs, which she so graciously shared for the “Wilder Side of Oakland County,” clearly reveal the cute new arrivals that are about fingernail size. I asked how she captured the images and she shared her secrets.

“In the fall I like to go on a hunt for Praying Mantis egg cases and put them in my garden.  As the spring temperatures began to raise I kept a close eye for the newly hatched nymphs. When I noticed the sawdust-like substance flecking off the case I knew they were on their way. Using my 90mm macro lens to photograph the miraculous emergence was like looking through a magnifying glass. It gave me an up-close-and-personal view of their tiny new existence.” 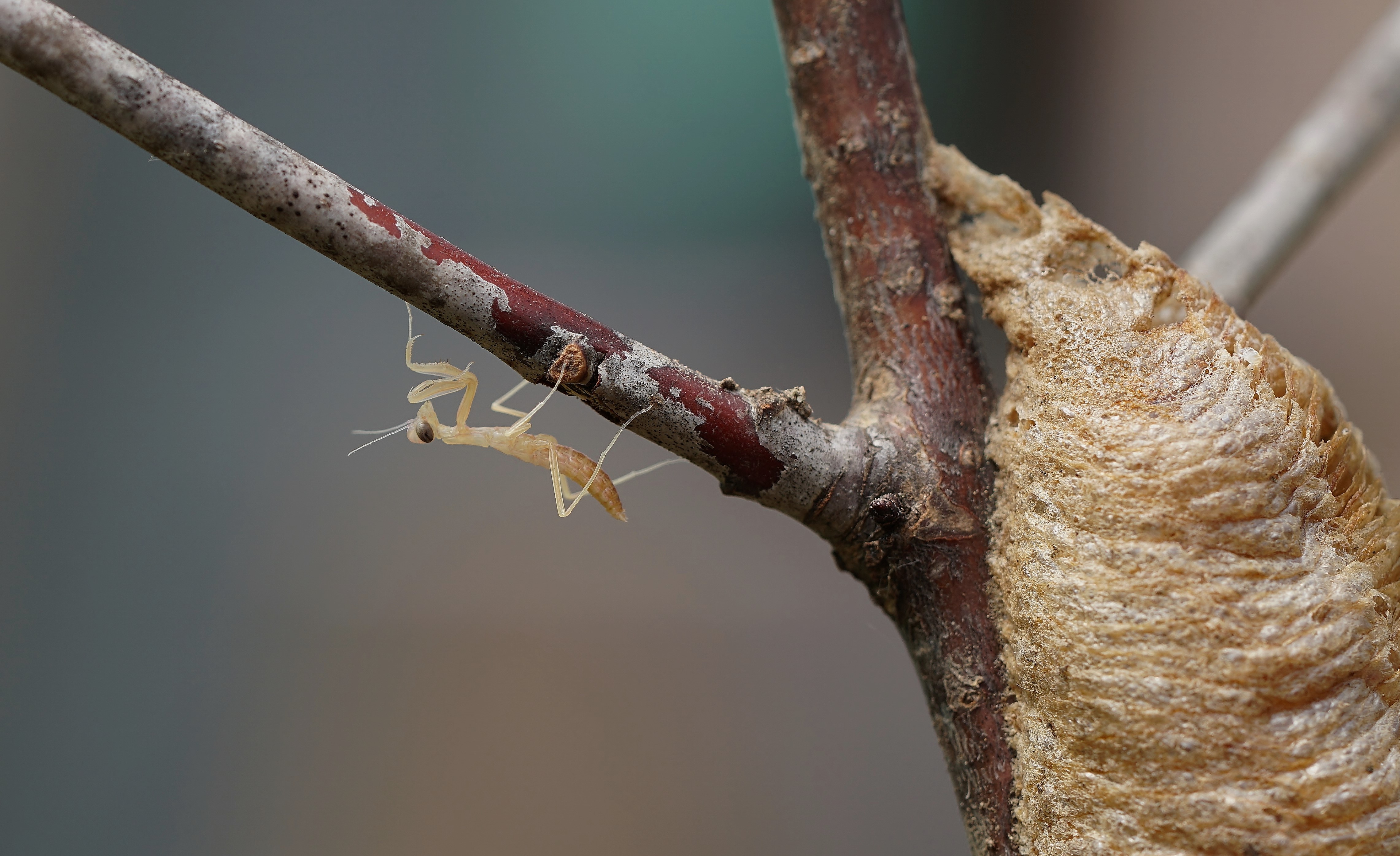 After the “family dining” stage is over, the survivors disperse and move on to bigger and better things. If it moves and they can grasp it; it’s dinner. Crickets, grasshoppers, honey bees, and other insects, bugs, and beetles of all species are part of the never ending smorgasbord. Occasionally small frogs and even flightless birds flopping on the ground become prey. 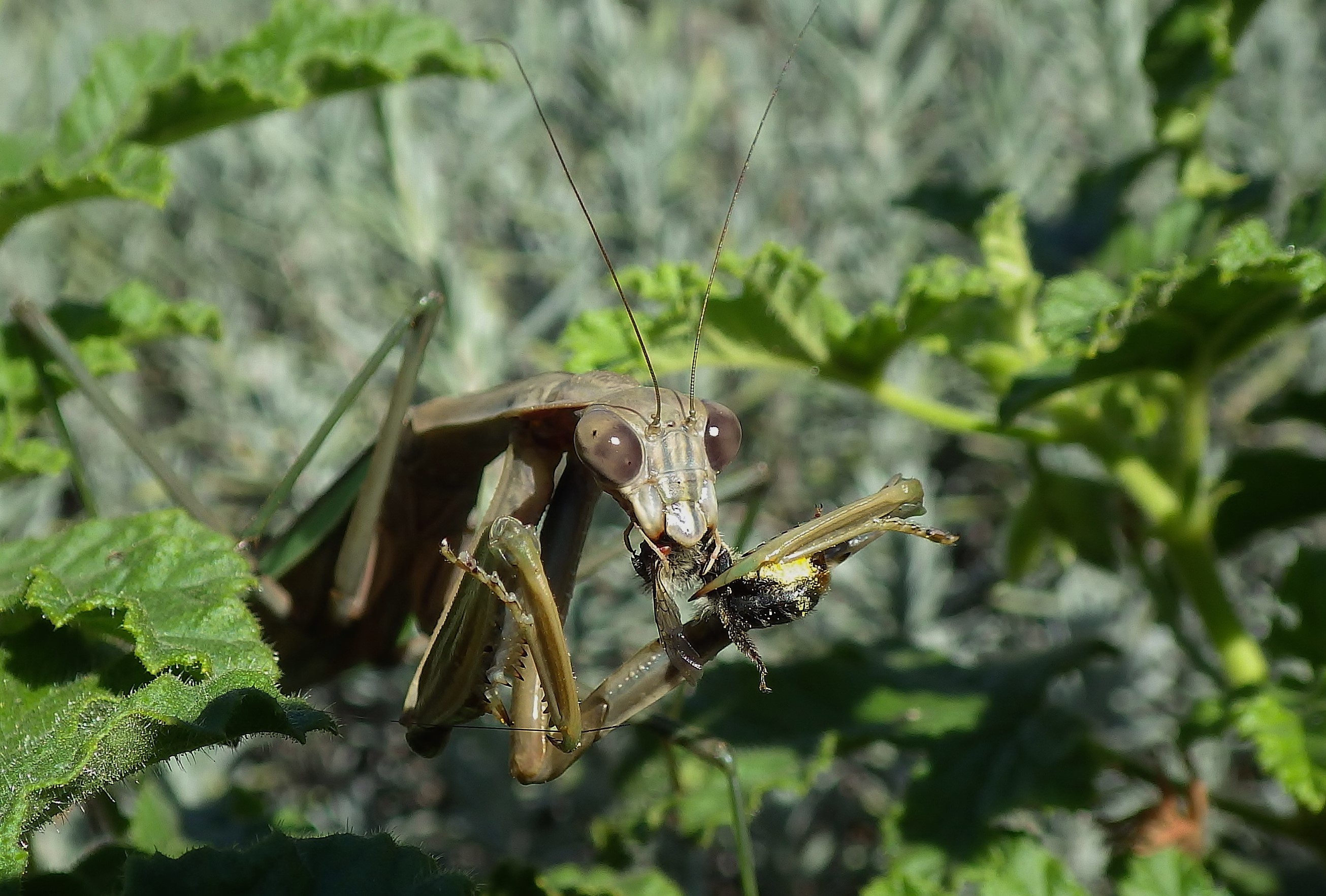 Life is fast, rough, and tough for these tiny creatures that look like prehistoric beasts from another age. But evolution has been kind to them. Unlike humans, who struggle to turn heads even 90 degrees to see what is just outside their field of vision, the mantis can spin its head a full 180 degrees and be instantly aware of, and wary of, anything that approaches. The head swiveling ability is a great adaptation when a superbly camouflaged mantis is waiting for a meal to come wandering by from any direction. We lack the flexible joint they have between their head and the pro-thorax that functions like a swivel. Give us another 100 million years of evolution and perhaps we too will develop that ability and give truth to those timeless words Moms say to their children: “I have eyes in back of my head.” 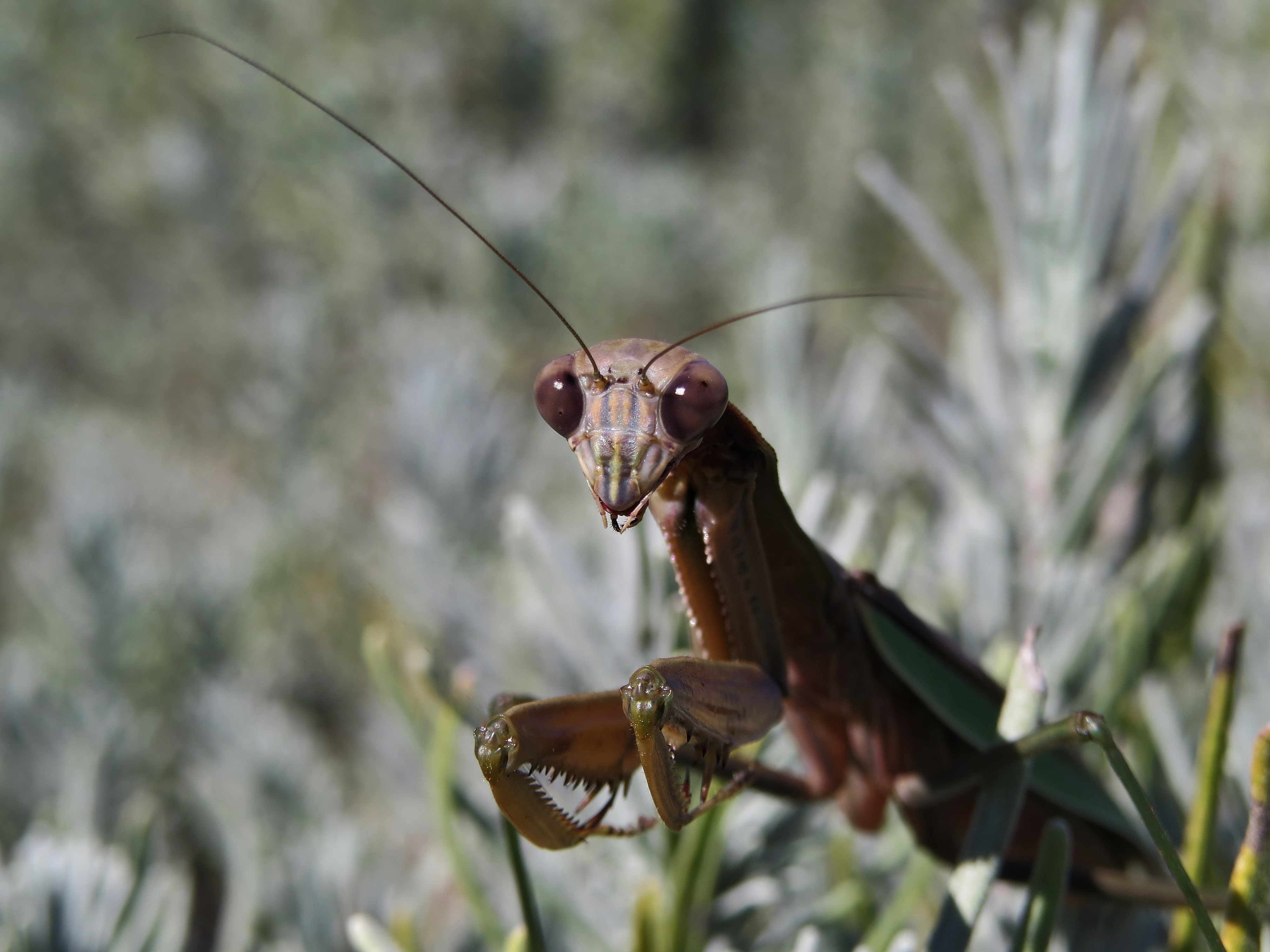 The head swiveling ability also makes it tough for a young entomologist to grab the praying mantis for a closer look. But sometimes when a summer day is cool and the mantis just seems to amble across the edge of a trail it is as simple as bending over and picking one up. Perhaps it’s a full stomach that adds to temporary sluggishness, but more often than not, they see us coming and evade and escape. They have two large compound eyes with multiple lenses that give these amazing creatures excellent peripheral vision and three “simple” eyes located between the compound eyes that are best for detecting motion. 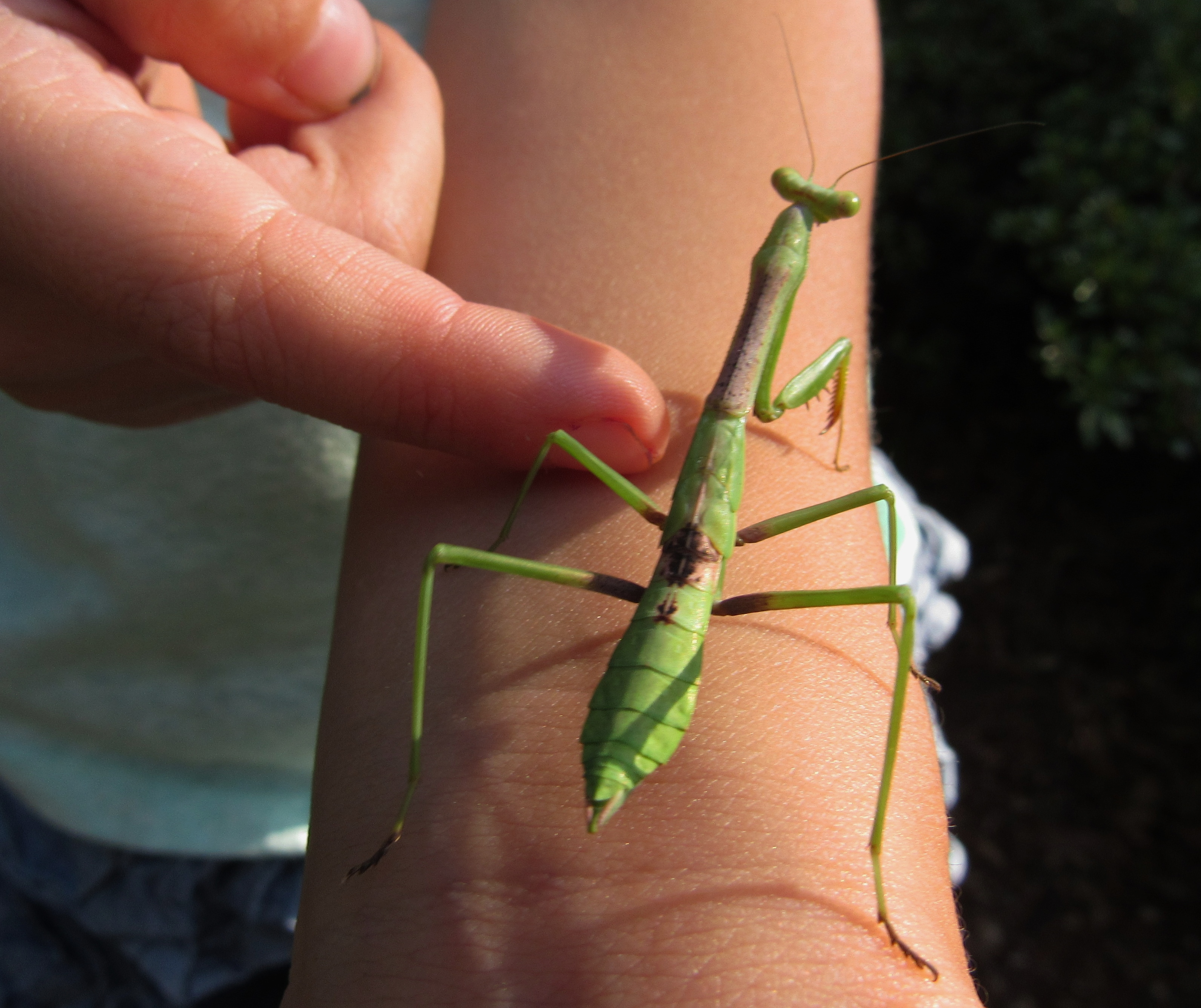 “Headless Males Make Good Lovers” is the name of a fascinating book about natural history oddities.  It is not fiction. Author Marty Crump explores the fact that while mating the female mantis sometimes uses her swiveling head ability to bite off the male’s head. The male’s body does not stop fulfilling its function and the moment carries on. However, further research has confirmed that this activity of decapitating her partner is more common in captive mantises than free roaming ones. Bottom line: In the wild 70% of the time the male lives after mating, but not for long. Most praying mantises never reach their first birthday. 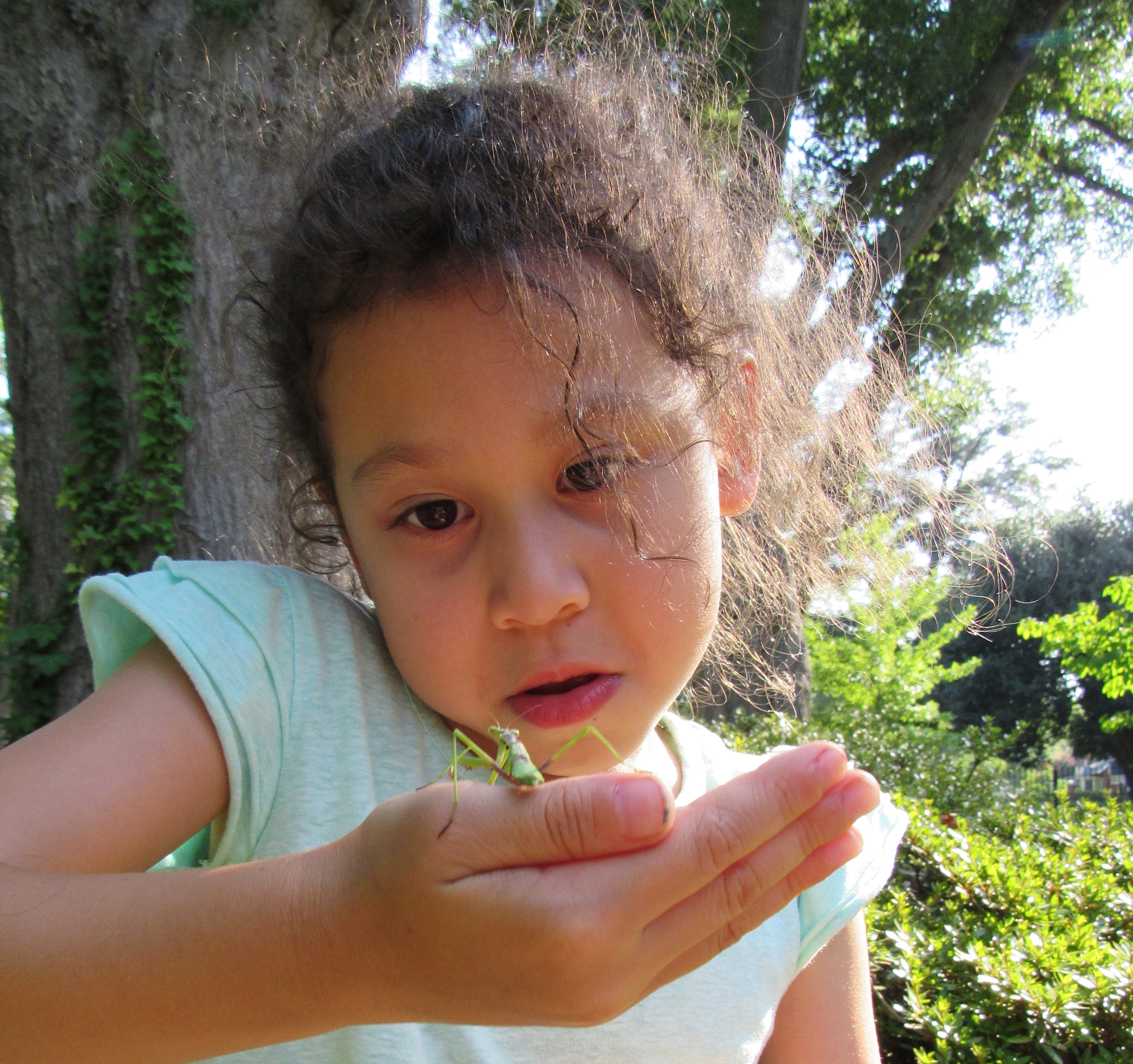 The common name Praying Mantis is descriptive and loved by kids. When those deadly forelegs are in their folded position, this creature with five eyes and a habit of eating its own appears to be in ritualized prayer.

Perhaps a better name would be Preying Mantis, for this super hunter is a master at catching its prey. Lucky for us, the big ones are only about five inches long. A five-foot long praying mantis would make a July walk on the Wilder Side of Oakland County a flashback to a Jurassic Park-style world. 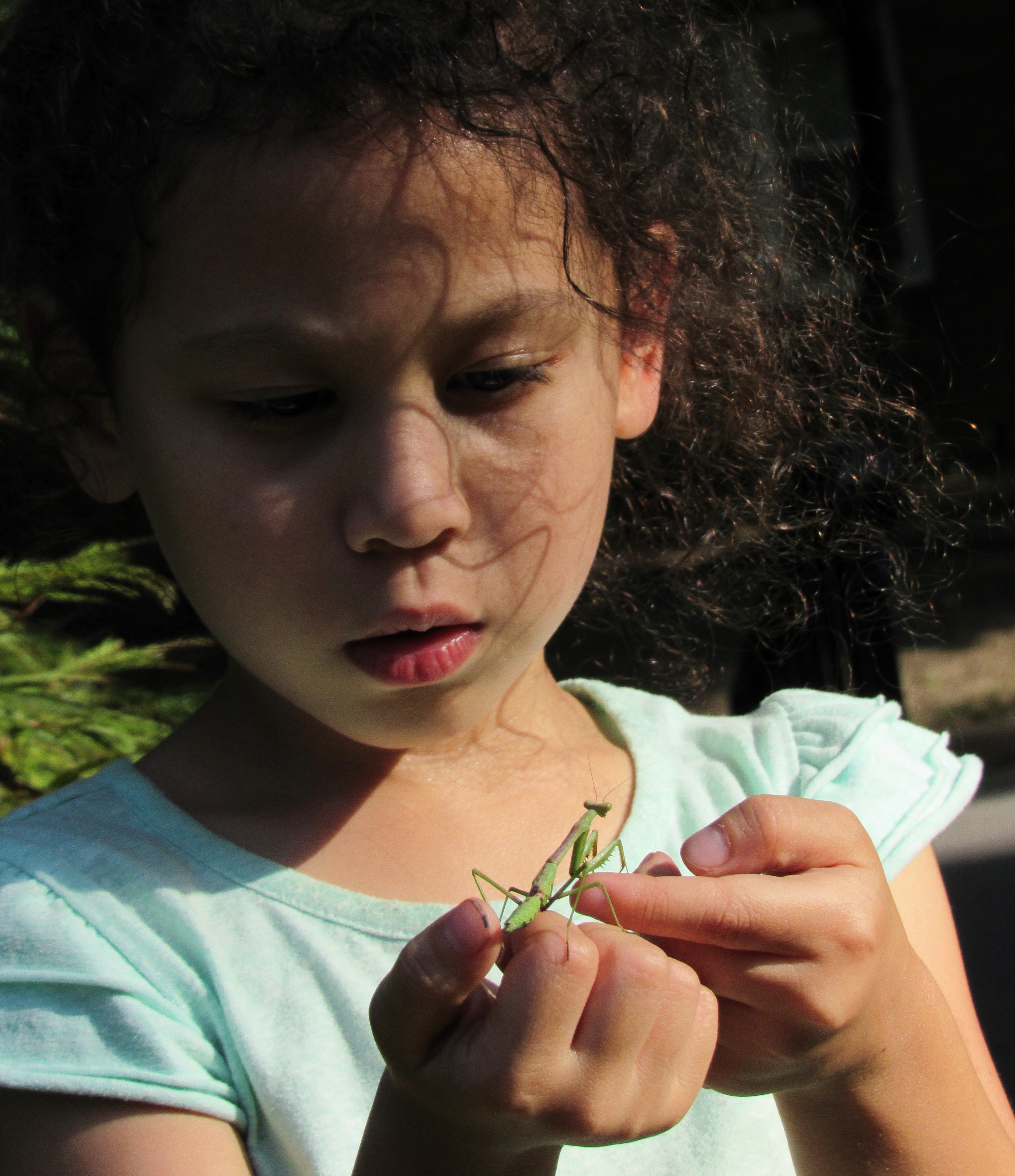 2 thoughts on “The Mighty Praying Mantis”