If a hiker wandered by a section of a small creek near Clarkston last Sunday they may have wondered why two women wearing waders carried small nets on long poles and slowly walked into the water. Every few minutes one would come ashore and carefully empty dark muck from the creek bottom into a pan. Another woman on shore gave directions, took notes and documented everything as I watched with the steadfast intensity of a man observing every aspect of very tiny creatures that wiggled in the muck pan in front of him.

Our chatting seemed equally odd, with comments about fascinating underwater house building, seasonal physical transformations, and reproductive bug behavior that bordered on the bizarre. No one wandered by our work site, so we did not have to explain that we were citizen-scientists for the day, and had adopted a meandering woodland stream for three hours.

We were hunting “benthos”, tiny water creatures that in most cases are smaller than a thumbnail. Our assigned catch, release and document hunting grounds were in the benthic zone, an ecological region defined at being at the lowest level of a body of water. Organisms living in this zone are called benthos, or more specifically benthic macroinvertebrates. Benthic macroinvertebrates are animals without a backbone that are big enough to be seen with the naked eye. They live at least part of their lives in or on the stream bottom. The names of many of the tiny creatures seem strange to the uninitiated. Hellgrammites, Caddisfly larvae, Dragonfly nymphs, Mayfly nymphs, Water pennies, Scuds (a type of fresh water shrimp), Stonefly nymphs, and Fingernail clams were all in the identification guides. So were Giant Water Bugs, Crayfish and Leeches, creatures I was far more familiar with.

I was one of those biological monitoring hunters last weekend on an Adopt-A-Stream team led by Naturalist Kathleen Dougherty, an experienced benthos hunter with the Clinton River Watershed Council. Our target zone was the stream in the Kimball Preserve, a protected sanctuary managed by the North Oakland Headwaters Land Conservancy within earshot of the traffic on I-75, just a bit east of M-15 and north of Clarkston Road. Forty-three other teams were at work in other locations of the Clinton River Watershed. We were the lucky hunters, for our Clinton River headwaters site was surrounded by beautiful woodlands on the Wilder Side of Oakland County, and dappled sunlight enriched the colors of Trillium, May Apples and Jack-in-the Pulpits that edged the shoreline.

The Clinton River watershed covers approximately 760 square miles in 4 Southeast Michigan counties – about 40% of eastern Oakland County, about 75% of Macomb County, and small portions of southern Lapeer and St. Clair counties. Springs, streams and creeks in the subwatersheds all feed the Clinton River as it meanders towards, and then through, densely populated areas on its journey to Lake St Clair. The council confirms that the Clinton River is the most populous watershed in Michigan when it comes to one landscape-altering species that lives within the watershed: Homo sapiens. Approximately 1.4 million of us live in the watershed boundaries and that can create complex water quality issues including chemically laden runoffs from roadways, parking lots and farm fields, as well as heavy loads of sediments during  storm events. Illegal dumping of wastes, sewage overflows and toxic spills add to the stew of troubled waters.

Biological stream monitoring in the Clinton River Watershed is based on the fact that different aquatic creatures react to pollution in different ways. Scientists observe changes that occur in the number and type of organisms present in a stream system to aid in determining the richness and health of the biological community. What affects the streams affects us, for all things in nature are connected.

The Macroinvertebrates we searched for were clues to the water quality, and perhaps the most essential part of citizen-scientists assessing the health of the rivers and creeks that flow into the Clinton River. It did not take long to realize we were immersed in an abundance of caddisfly larva.  And that was a very good thing, for caddisflies are useful as bioindicators of good water quality and are large enough to be assessed conveniently in the field with the naked eye. The presence or absence of them is an indirect measure of pollution. When a stream becomes polluted, tiny pollution-sensitive organisms decrease in number or sometimes vanish all together, while pollution-tolerant organisms increase in variety and number. Pollution-sensitive organisms such as mayflies, stoneflies and the caddisflies that we were finding are very susceptible to the effects of physical or chemical changes in a stream.

Dougherty stared intently at both the wiggly and motionless creatures we sorted and explained, “Macroinvertebrates are sensitive to pollutants in the water and the numbers and kinds of macroinvertebrates in a location can provide an accurate stream quality score.” Within ten minutes of our start we were well on the way to confirming that the headwaters of the Clinton River in the preserve was in good health. The clue? Caddisfly nymphs. Dougherty confirmed the numbers were excellent, adding, “I have never seen so many caddisflies at once since I started monitoring.” She went on to explain that some caddisfly larvae carry their tiny shelters underwater and are very intolerant of polluted waters. One small submerged rock was covered with firmly attached caddisfly larvae. I stopped counting at fifty and passed the rock around for more experienced eyes to confirm my count. 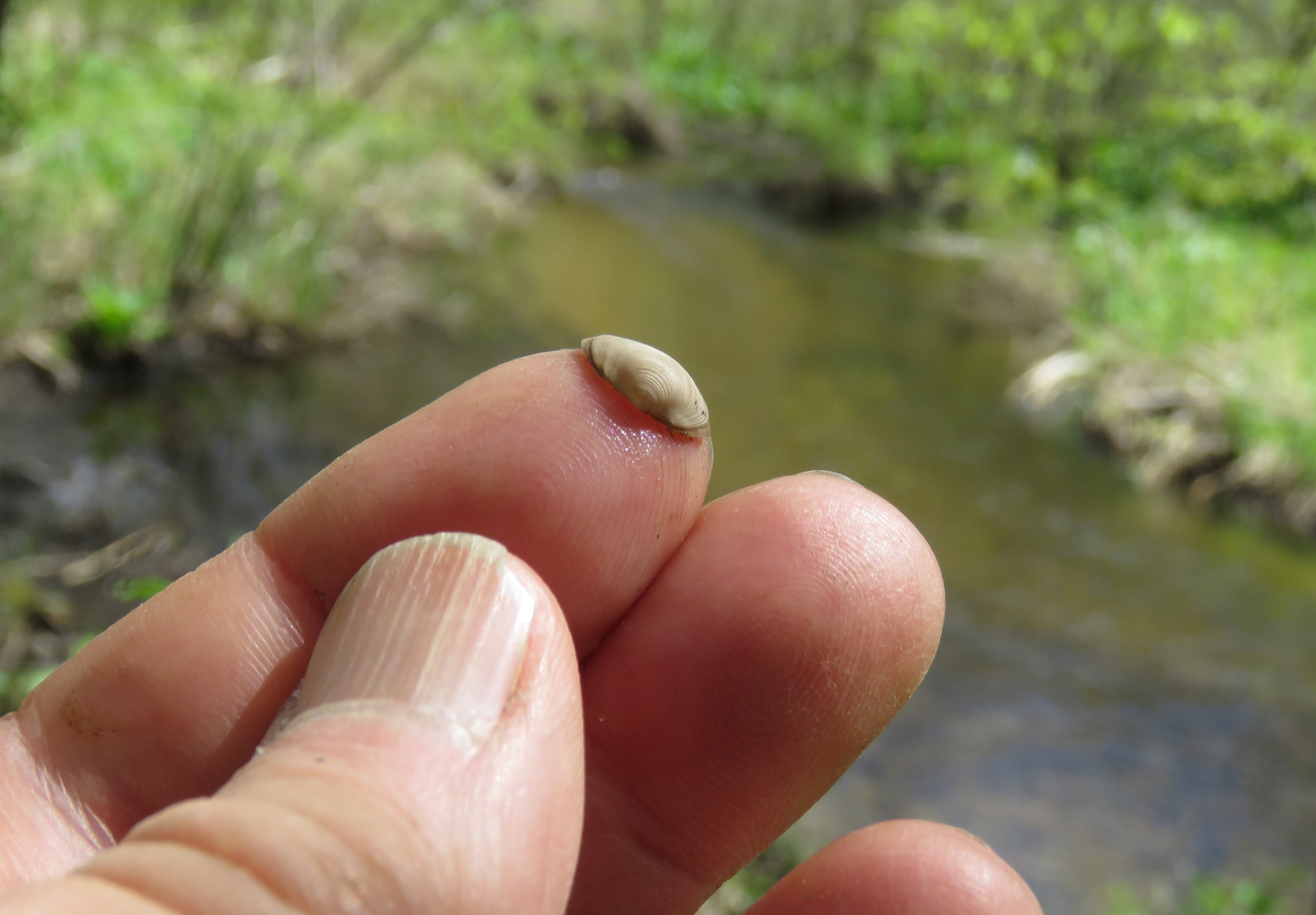 Caddisflies are fascinating to novice macroinvertebrates hunters such as myself. An information search after I returned home revealed that there are numerous species of caddisflies, but they all have “complete metamorphosis”, meaning that their life-cycle is similar to that of a butterfly: they have a larval stage, a pupal stage during which metamorphosis occurs, and an adult winged stage that looks entirely different from the larval stage. Caddisflies build underwater “cocoons” where they live as a pupa. They emerge in late spring from the cocoon, float to the water’s surface or the shore, and finish their transformation to an adult, terrestrial insect. Caddisflies that build cases out of organic matter, such as twig fragments are found in slow parts of flowing water while faster current caddisflies, such as the ones we encountered the most, make cases created out of sand and tiny fragments of pebbles that are not easily swept away.

The Clinton River Watershed Council is eager to work with more volunteers, and it’s easy to become an Adopt-A-Stream Volunteer. Here’s how: The Clinton River Watershed Council’s Adopt-A-Stream program is a volunteer based program that empowers community members to protect local streams and rivers by monitoring their health. Volunteers must attend a volunteer training in order to participate. Trainings are scheduled and promoted throughout the year. Volunteers are supplied with the necessary equipment and sent out to gather information on physical characteristics and macroinvertebrate (a.k.a. aquatic bug) populations with their group leader.  Twice a year (May and October) these teams of trained volunteers visit their adoption site and collect data.

To become an Adopt-A-Stream volunteer, contact the Clinton River Watershed Council by email at contact@crwc.org or by phone, 248-601-0606. General information on Clinton River Watershed Council can be found at their website with specific Adopt-A-Stream details. The next monitoring will take place on the first weekend of October, but it’s not too early to plan. A “Bug Identification” session will also occur this summer for new volunteers, and planning for a winter stonefly search is already in the works, with stoneflies being one of the most sensitive of the macroinvertebrates that live in the waters of the wilder side of Oakland County.