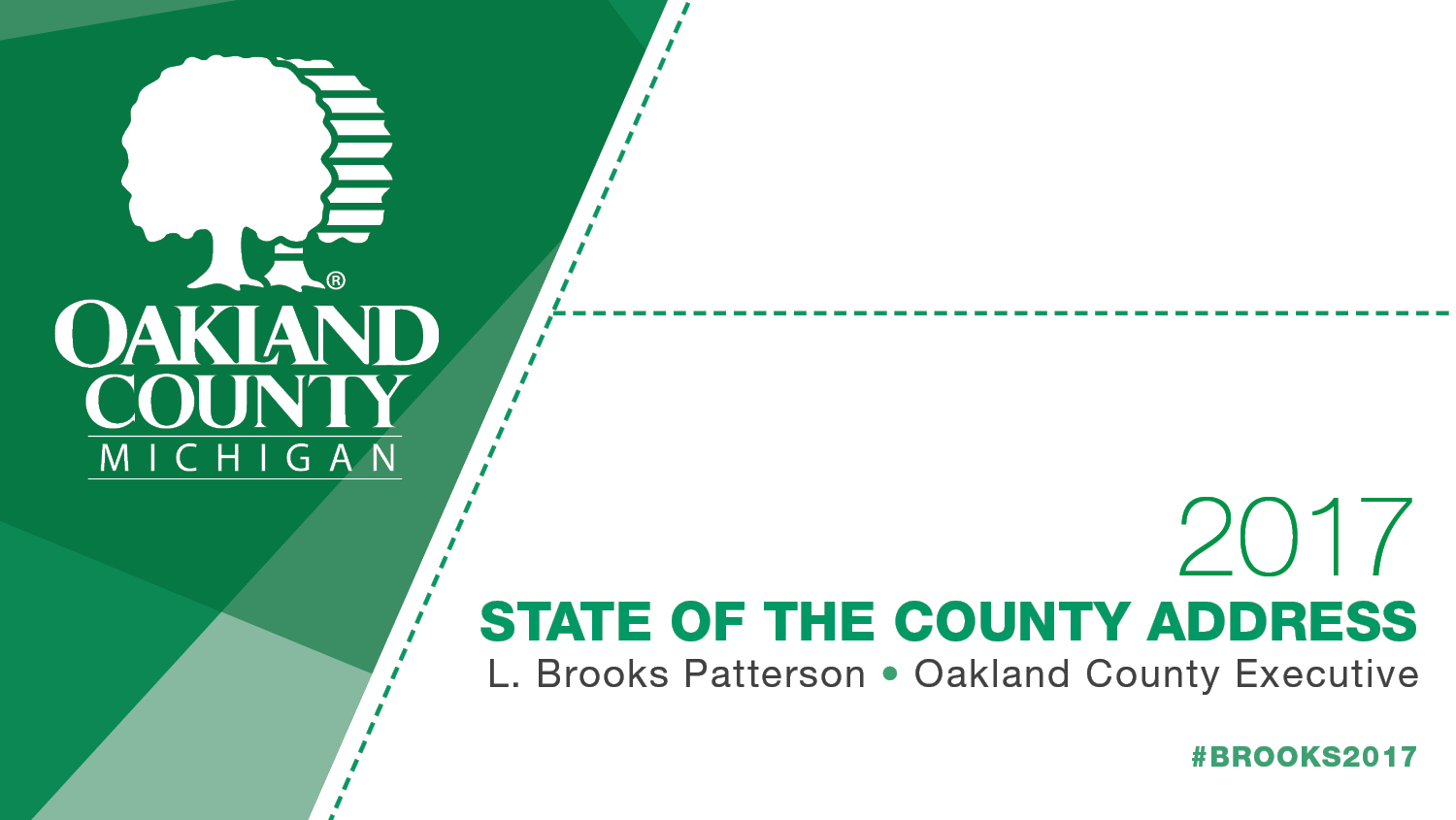 Oakland County’s best accomplishments lay ahead especially in high-tech investment, County Executive L. Brooks Patterson said Wednesday evening during his annual State of the County address before an audience of more than 600 guests at the Auburn Hills Marriot Pontiac at Centerpoint. He began by spotlighting the new $40 million Proton Therapy Center at Beaumont Hospital in Royal Oak slated to open this spring.

“It is a giant leap forward in cancer treatment – one that Oakland County’s Medical Main Street played a significant role in supporting,” Patterson said. “We personally lobbied Lansing so that Beaumont could receive state approval for its Certificate of Need for the Proton Therapy Center. We did so because we recognized the value of having advanced cancer treatment in the heart of Oakland County, both from a quality of life and business attraction standpoint.”

The Proton Therapy Center, which will be one of only 36 in the world, is a high-tech alternative to standard radiation treatment. Proton therapy’s greater precision destroys cancer cells but spares adjacent healthy tissue and reduces side effects.

Medical Main Street, Oakland County’s initiative to drive medical tourism to the region, continues to evolve. In 2017, it will have an additional focus on commercializing medical technologies. Medical Main Street’s Advisory Roundtable will partner with Oakland County’s One Stop Shop to provide key services to help academia, hospitals, and private businesses take that next step after researching and developing their medical advancements.

“Oakland County will become a pipeline for delivering 21st Century medical innovations to market,” Patterson said. “That, my friends, is 21st Century progress.”

Oakland County is also becoming the premier location in the United States for developing advanced vehicle technology. Patterson cited Uber’s announcement in January that it has selected a site in the city of Wixom where it will test autonomous driving technology as well as Google’s opting last year to locate its 53,000-square-foot research and development center for self-driving cars in Novi.

“In addition, we have the Oakland County Connected Vehicle Task Force which we launched back in 2014,” Patterson said. “In three short years we already have a couple dozen companies working in this space.”

To continue to attract these companies to Oakland County, the Department of Economic Development & Community Affairs recently conducted a skills needs assessment in the connected mobility sector. The report uncovered a new job classification that was previously unknown to workforce development professionals. The position is a hybrid of electrical engineer, mechanical engineer, and software developer. Plus, it provided insight into the greatest challenges faced by hiring managers in advanced automotive technology. One that stands out is that some engineering degrees outdated because the complexity of connected mobility requires a hybrid of engineering, computer, and technical skills.

“Information is power,” Patterson said. “Rest assured now that Oakland County has these survey results, we will be sharing them with industry leaders, colleges and universities, high schools, and workforce development professionals. And if the previous three skills needs assessments are an indication, there will be a strong response from our educational and training institutions to modify and create curriculum that will feed a new generation of highly skilled young people into the advanced automotive technology sector.”

Oakland County is making strides to attract the next generation of thinkers, doers, and dreamers in its Oakland Next initiative. Oakland Next is the county’s branding effort to harness young talent in Oakland County – to introduce high school and college students to the fact that so much of what they are looking for both in terms of quality of life and careers they will find right here in Oakland County.

One example is Manufacturing Day. For two years in a row, hundreds of Oakland County high school students the opportunity to tour dozens of advanced manufacturing plants at companies such as BASF, DENSO International, Hirotec America, Lear Corporation, Magneti Marelli, and more.

“You should really see how the faces of these students light up the first time they walk into one of these advanced manufacturing plants,” Patterson said. “They are in awe when they walk in and see robotics and advanced engineering hard at work. Many experience a moment when they realize that they don’t need to leave Michigan to pursue a high-tech career. It certainly is not their grandfather’s manufacturing plant.”

Manufacturing Day tours have been so effective that this year, using it as a model, Oakland County will launch “Info Tech Day,” when hundreds of high school students from around Oakland County will tour numerous Information Technology companies to see that their aspirations to pursue that high tech career can be fulfilled right here at home.

Patterson said the knowledge-based economy jobs are not just in private industry. Some are right here in Oakland County government. For example, the Oakland County Medical Examiner’s office is now a teaching facility after it signed a contract with Wayne State Medical School and the Detroit Medical Center to instruct their medical students who are studying pathology. In addition to those students, 25 to 30 medical students from all over the United States come to our Medical Examiner’s Office every year for weeks at a time in order to complete their pathology rotation in medical school.

“Though it is a handful of students, we think it is a tremendous opportunity to highlight both the availability of knowledge-based careers and the quality of life here in Oakland County to young talent from other parts of the country,” Patterson said.

The city of Pontiac is making a comeback.

“Pontiac has come to represent an often told America story: An urban center in America’s heartland falls on hard times, at least in part because of the changes in U.S. manufacturing, in particular the auto industry. But like so many urban centers, Pontiac is seeing a renewal because of private investment by individuals with vision. Individuals who see the potential, the future,” Patterson said.

Patterson recognized and thanked a number of entrepreneurs who are helping Pontiac rebound. Among them was Pete Karmanos, Jr., whose MadDog Technology subsidiary Lenderful, an online mortgage buying experience, is investing $1.75 million in downtown Pontiac and creating 52 jobs. Patterson quoted Karmanos’ words about investing in Pontiac in his speech:

“Establishing a core technology hub in Pontiac will draw many more technology-centric companies in the near term. For employees this represents a close, convenient place to work. This competitive location will draw people from all around the region.”

Patterson said he can make assurances of technology growth in downtown Pontiac in the future because it has plentiful underground fiber optic infrastructure – a necessity to attract and retain tech companies.

Other Pontiac investors he praised:

A significant sign that Oakland County continues a significant recovery from the Great Recession is significant private investment at Oakland County International Airport. Corporate Eagle is investing $8 million for a new 80,000-square-foot hangar facility. Edsel Ford’s Pentastar Aviation is exploring building lifestyle hangars – the aviation equivalent of M1 Concourse for cars. Kirt Kostich of Royal Air expanded by 43,200 square feet with the completion of two passenger buildings and a third to store aircraft with a total price tag of $3.2 million. Plus, the airport itself will invest $8 million in the coming year to rebuild taxiway Charlie or taxiway C, the busiest taxiway in all of Michigan.

“Dave VanderVeen, Oakland County’s director of central services who oversees the airport, often opines that aviation is the first sector into a recession and the last out of one. So, when I report to you tonight that Oakland County International Airport is expanding its footprint for corporate business development projects this year – projects worth millions of dollars in private investment – you get the sense that Oakland County’s economy continues to strengthen from the days of the Great Recession,” Patterson said.

Finally, Oakland County will see a number of improvements in public safety in 2017. The county has begun to replace the county’s 911 infrastructure from a copper network which has reached the end of its useful life as it dates back to 1963. A new regional fiber optic network called Emergency Services Internet-protocol Network or ESINet will prepare the way for the Next Generation 911 system in Oakland County. ESINet 911 calls will be routed using geographic information system coordinates. It will enable 911 callers to not only make voice calls to emergency dispatchers, but also they will be able to send photographs, videos, in-car crash system data, and texts from emergency scenes.

Oakland County continues to prepare for active shooters. Over the past five years, Sheriff Mike Bouchard and Oakland County Homeland Security Division, under the leadership of Ted Quisenberry, have leveraged federal grants to help equip and train our local police departments to neutralize an active shooter. Across nearly the entire county in virtually every department are police officers who are part of “OakTac” response teams. OakTac stands for Oakland County Tactical Response Coordinating Group. They are trained and equipped to enter a building and contend with an active shooter.

OakTac is comprised of 36 agencies and serves over 96 percent of the population in Oakland County. There are over 2,100 Oakland County law enforcement officers who have received this training.

In 2017, we are going to implement additional training which could increase the likelihood of survivability for victims of an active shooter. Oakland County Homeland Security Division will begin to train firefighters and emergency medical personnel to strap on bullet-resistant vests and enter an active shooter scene not far behind an OakTac team, even as that OakTac team continues to locate the threat to neutralize it. In these “warm zones,” firefighters and EMS personnel will triage, treat, and evacuate victims. In recent active shooter scenes, it has been found that victims who were alive when firefighters and emergency medical personnel were able to enter the building ultimately survived.

To watch or read Patterson’s 2017 State of the County speech, visit oakgov.com/exec.