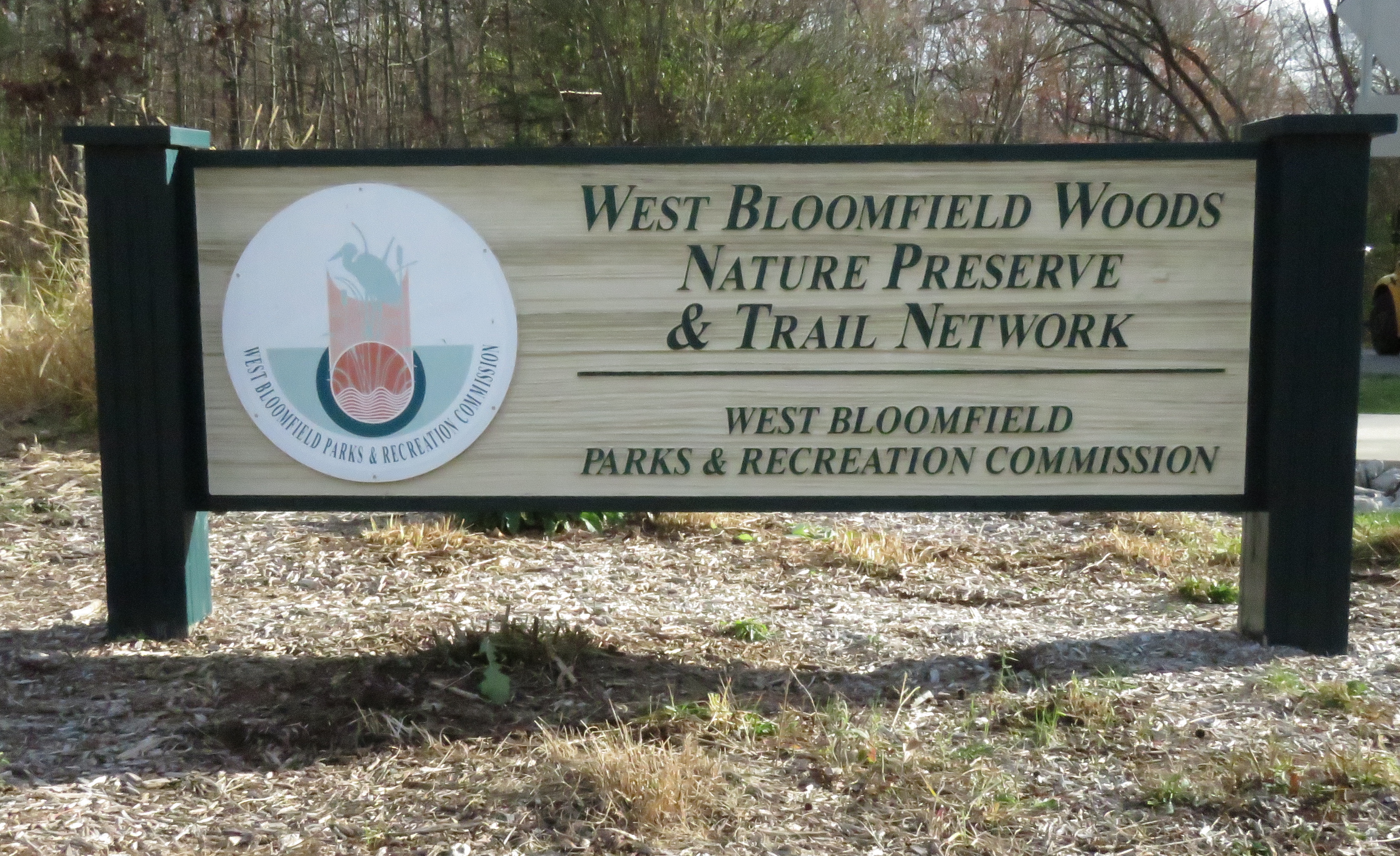 “Like winds and sunsets, wild things were taken for granted until progress began to do away with them. Now we face the question whether a still higher ‘standard of living’ is worth its cost in things natural, wild and free.” Aldo Leopold, 1948. His words hold equally true today for those that cherish the West Bloomfield Woods Nature Preserve, a 162 acre, heavily wooded natural gem nestled between hills and palatial homes in highly developed, suburban West Bloomfield Township. The heron rookery that drew so much attention and praise in the 1990s is gone, and now exists just in old photos and memories. Jennifer Tucker, the new Executive Director of West Bloomfield Parks and Recreation, is correct when she states, “The West Bloomfield Woods Nature Preserve is our own little bit of Up North right here in West Bloomfield. We are very lucky to have a place that our patrons can get active in and enjoy right here in their community.” Thousands would agree with her. 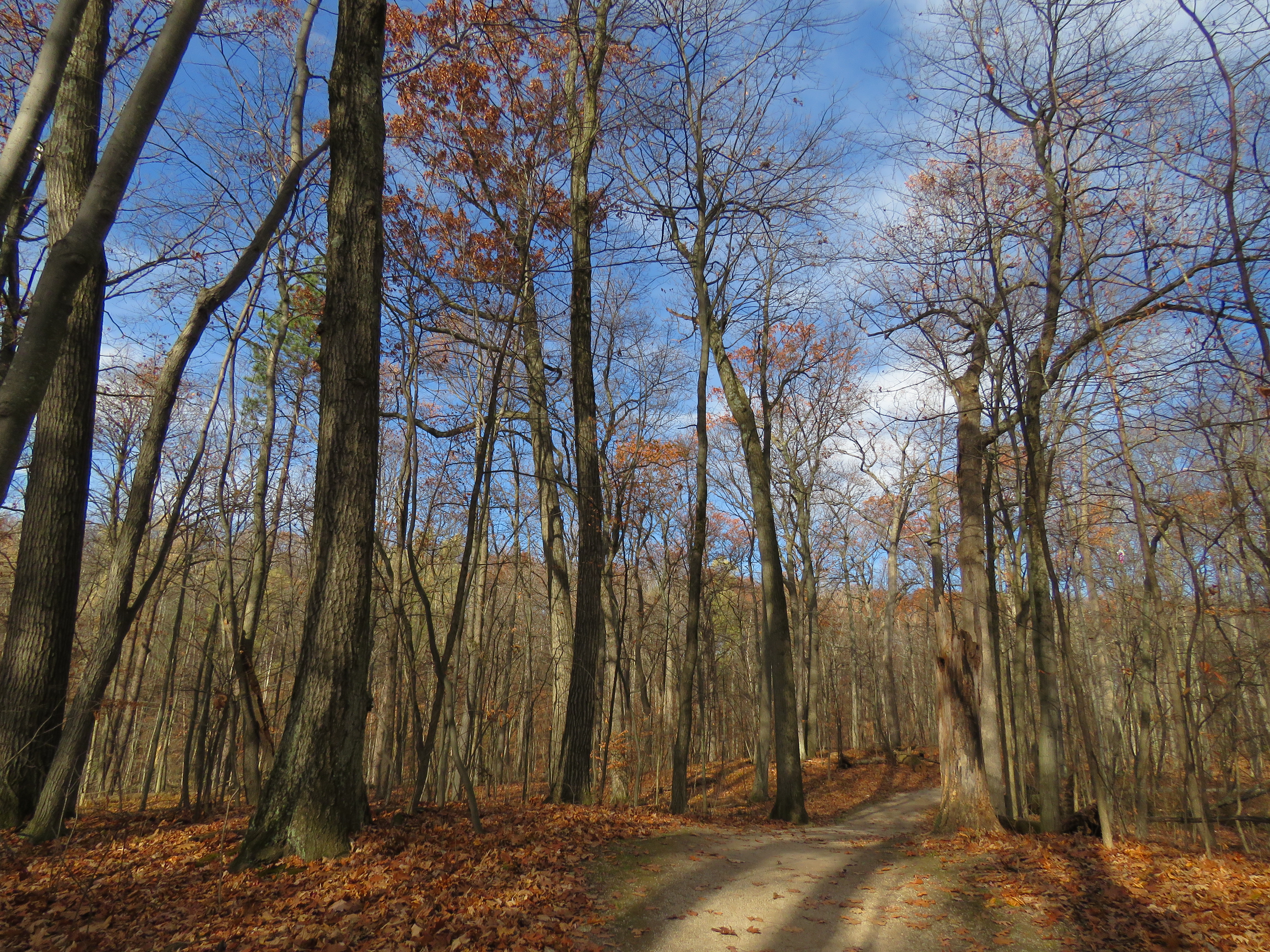 Every year local residents are joined by visiting school groups, birdwatchers and nature lovers that explore the gently meandering, well-maintained, nature-rich, 2.5 mile trail that one might not expect in such a developed area. A lesser known fact is a lasting tribute to those that fought for its protection decades ago. In 1990, the preserve became the first preserve in Michigan to receive recognition as an Urban Wildlife Sanctuary from the now closed, National Institute for Urban Wildlife, an organization that promoted the preservation of wildlife in urban settings. 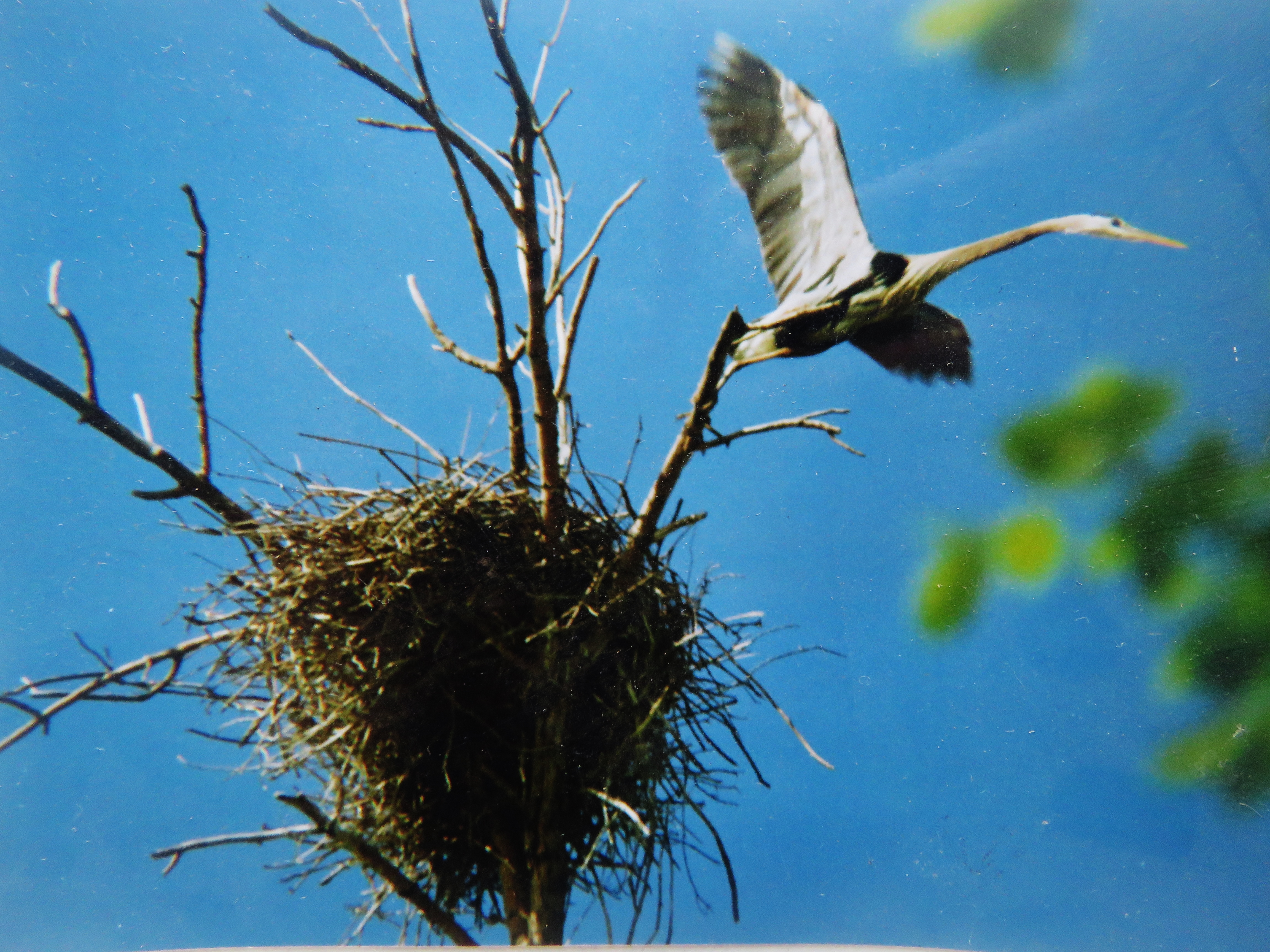 I meandered the trails last week, accompanied by Rose Sallen, the longtime Customer Service Representative for West Bloomfield Parks. Perhaps critical to today’s trail tale, is a bit of personal bias background. I was the naturalist for West Bloomfield during the heron rookery era and hiked the trails almost daily, sometimes on my own, but more often than not, accompanied by enthusiastic school kids on field trips. Little eyes saw secrets I missed, and we discovered and learned together. And on occasion, my education partner was Biologist/Teacher Lucy Clucas, the owner of nearby Turtle Creek Farm. For Lucy and I, it was an outdoor laboratory of nature exploration, and there was plenty to explore. There still is, and the trails and vistas take on a special appeal this Thanksgiving week. 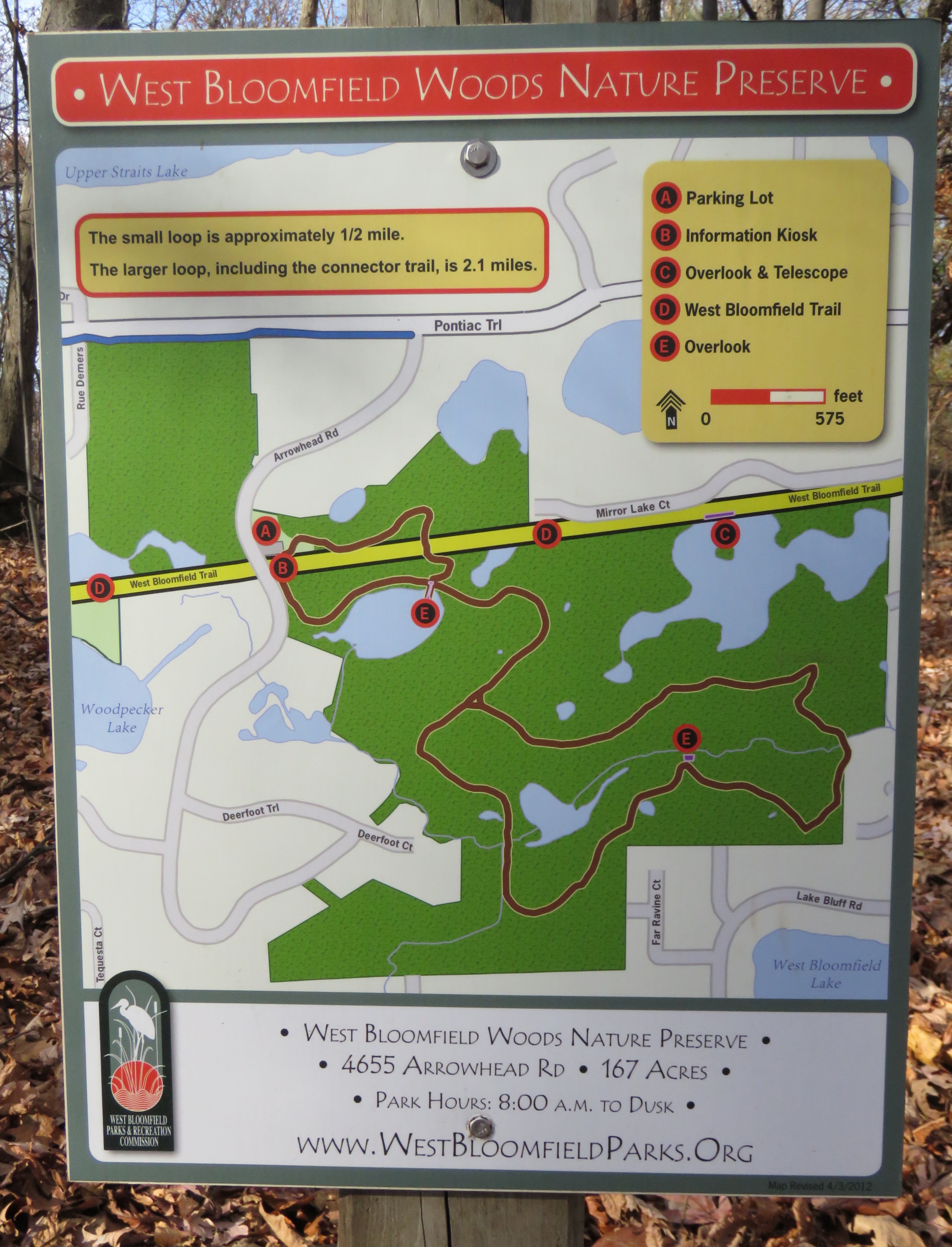 The Opt Outside initiative, to explore outdoors instead of shopping on “Black Friday”, is the perfect excuse to visit this preserve, and walk off the calories. Permits are not needed. Start your trek at the trailhead located on Arrowhead Road just south of Pontiac Trail Road. Visit West Bloomfield Parks website for information on the preserve and other West Bloomfield parks.

If you bring a dog, it must be leashed at all times. No exceptions! Although bicycles are permitted on the West Bloomfield Trail, a popular Rail to Trail conversion project that skirts along the northern perimeter of the nature preserve, no bikes are allowed on the nature trails. The nature trail path is wide, and maps are posted at significant junctions. The terrain has gently rolling hills, remnants of the last glacial retreat. Small wooden bridges and an overlook near the southern boundary of the preserve provide tranquil views of the Franklin River, a gently flowing Rouge River tributary that seems to embrace the natural, wild and free spirit of the land. 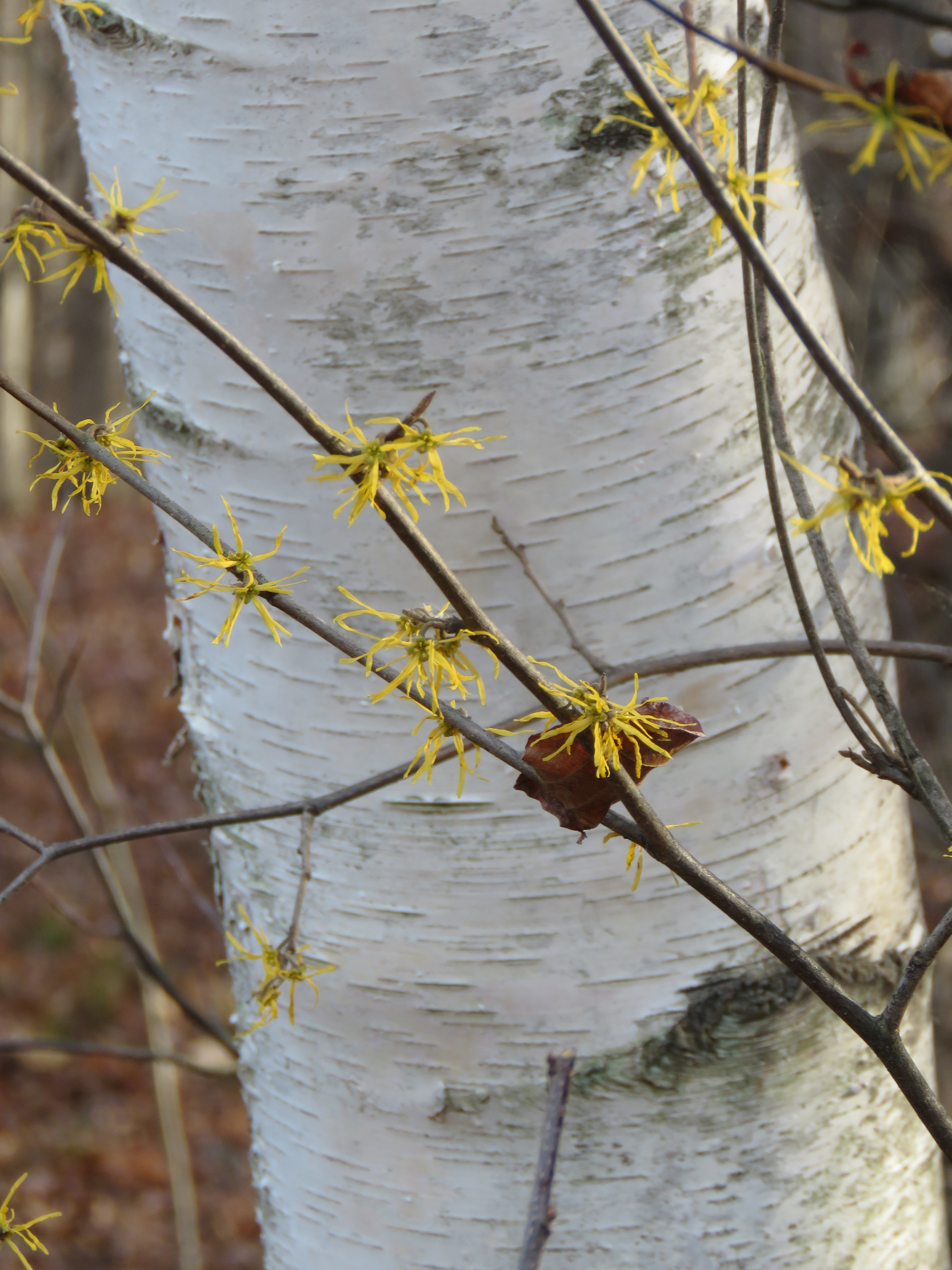 Flowers are gone, with one notable exception, the witch hazel, a tree-likes shrub that dazzled the eye with brilliant yellow spider-like blossoms in late October. Hikers will still notice some of the frost-nipped blooms today. Cooper’s Hawks, Chickadees, White-Breasted Nuthatches and Downy Woodpeckers are active, and early risers may see white-tailed deer and perhaps tracks near the river that share the tale of urbanized, yet elusive, eastern coyotes. 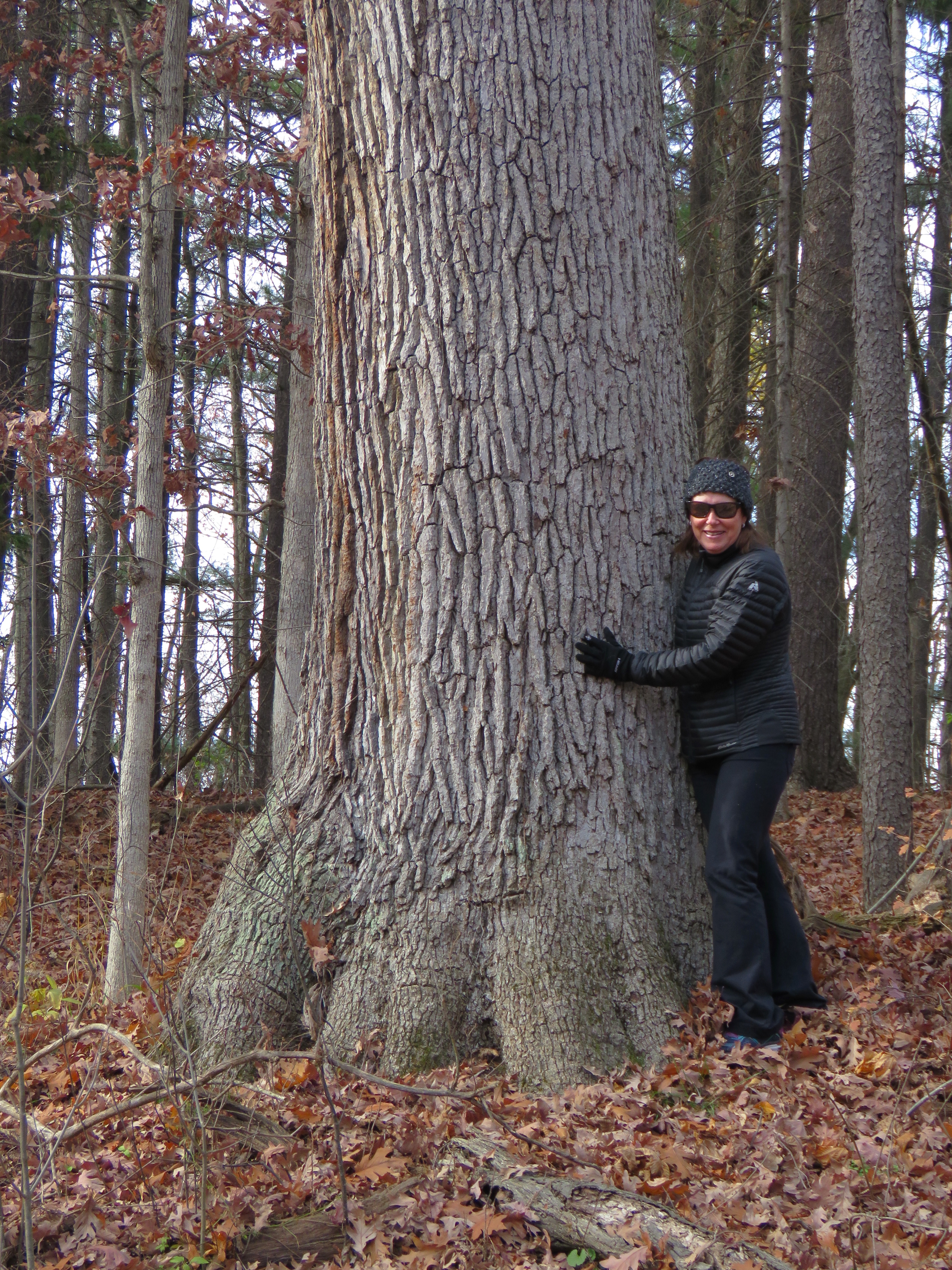 “The Woods”, as the preserve is affectionately called by local residents, can capture hearts. Look for the big oak that may have just been an acorn around the time of the American Revolution and then give it a big hug as Rose Sallon did. It’s adjacent to the trail, just a few hundred yards from the trailhead. As darkness falls, the old oak won’t be alone. It makes a perfect hunting perch for Great Horned Owls that keep watch on a trail that is still wild and free, but with a few benches as added creature comforts.