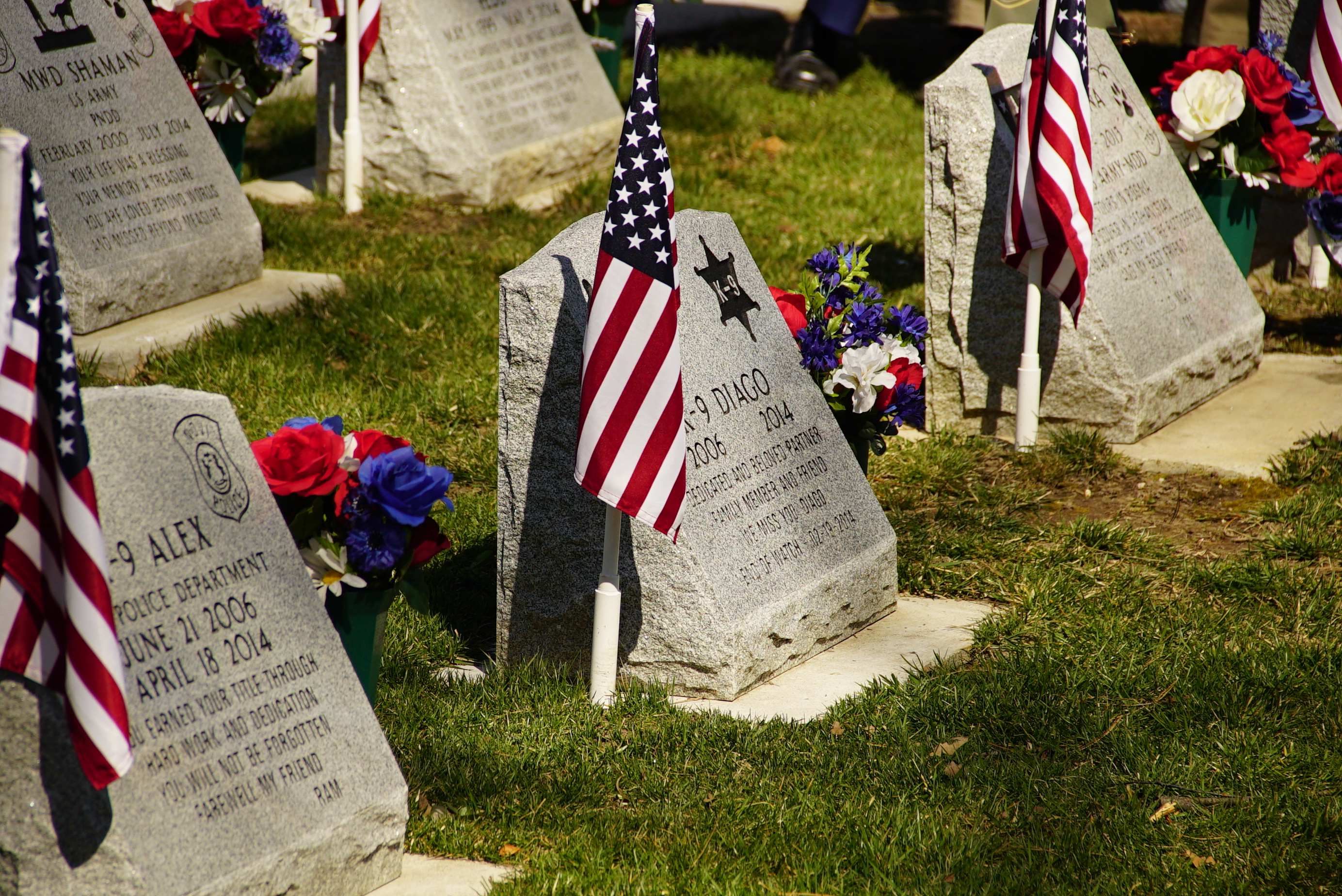 A procession of flags made their way to the cemetery. The wind whistled through the trees, ruffling the edges of the leaves.

A crowd stood quiet surrounding a number of headstones adorned with the American flag.

The names engraved in the marble are those of four-legged war heroes who, through their loyalty, saved the lives of others at the cost of their own.

These heroes, were laid to rest in their fur and bravery at the most appropriate place, the Michigan War Dog Memorial. 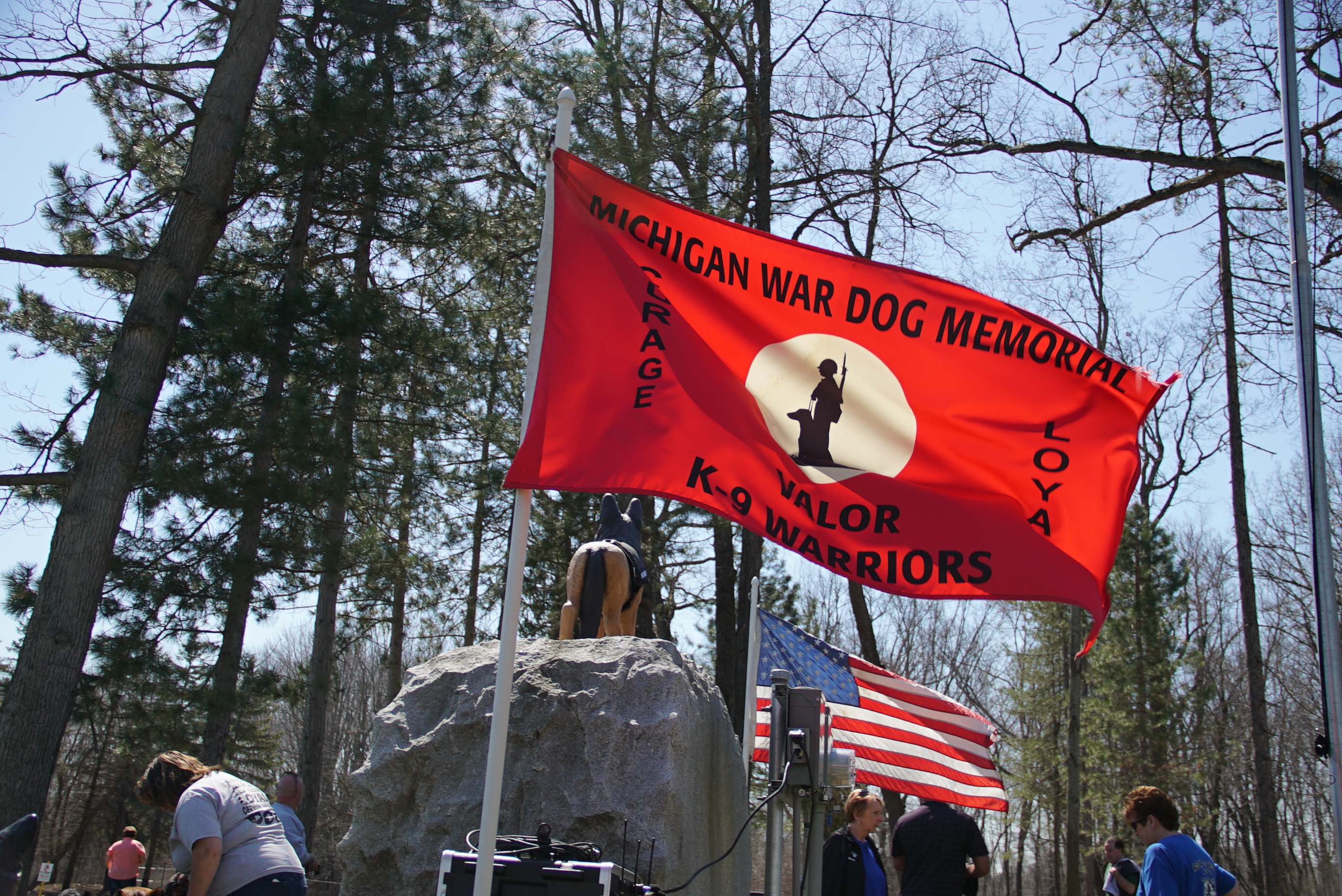 At this very place, on Saturday, April 16th, active duty service members, veterans and their bold K-9 warriors gathered to pay their respects to their fallen fur friends. Even K-9 Piper, Wildlife Control Canine out of Traverse City, MI was in attendance.

It was a proud day for military and service dogs state and nationwide as Governor Rick Snyder declared March 13th K-9 Veterans Day in the State of Michigan. Following the dedication, the dogs in attendance let out an honorary howl to their fallen patriots, led by the Hanabrit K-9 Salute Patrol.

This humble pet cemetery was overgrown and all-but forgotten until Phil Weitlauf, president and founder of the Michigan War Dog Memorial discovered it at Milford and 11 Mile Roads in Lyon Township. He, and his non-profit team, have since cleared out the overgrowth and continued their work – giving four-legged veterans a proper military burial. 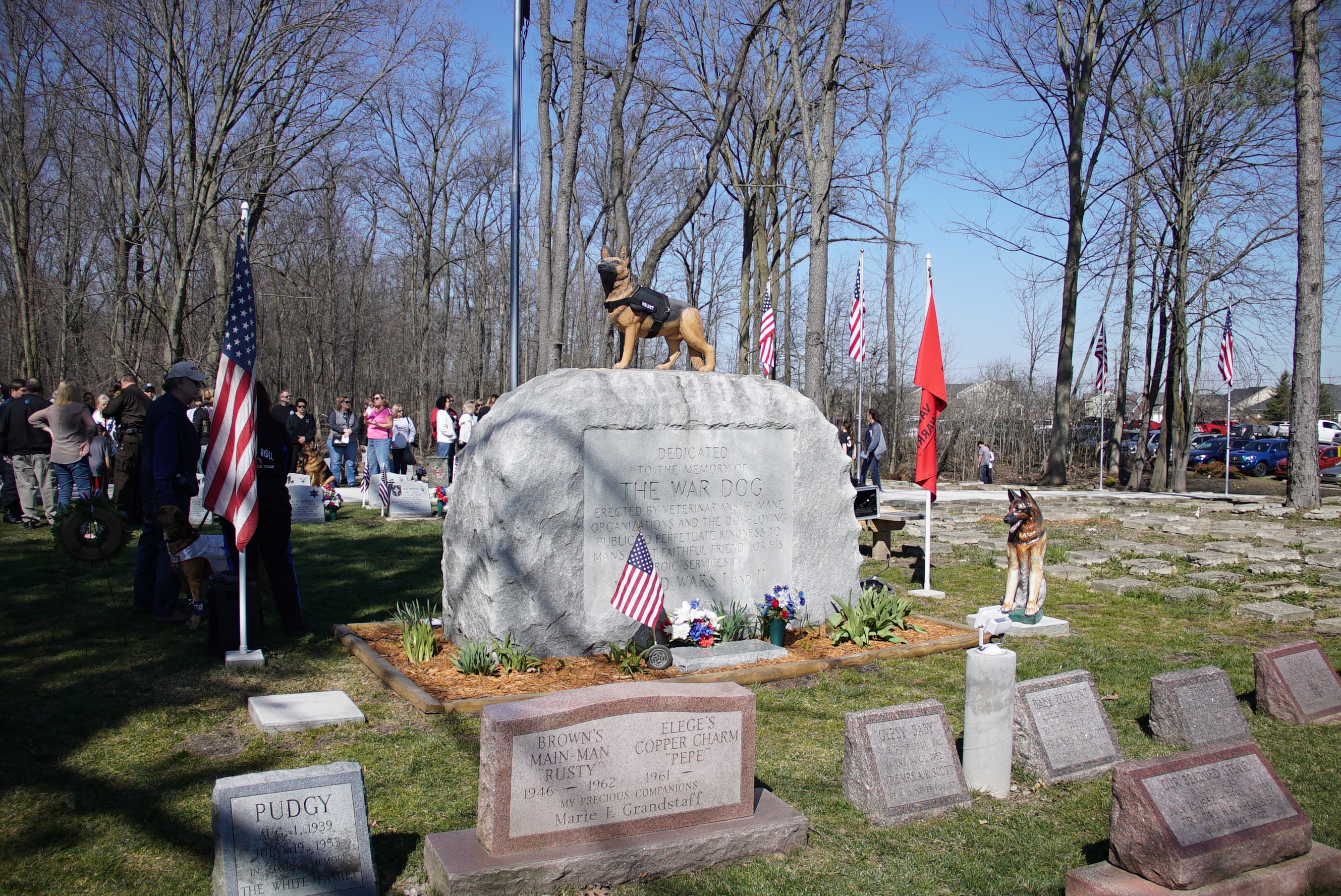 According to Weitlauf, 28,000 human lives were saved by war dogs in World War II, the Korean War and the Vietnam War combined.

“That’s a lot of men and women that would not have come home, if it weren’t for these dogs,” he said. “These military dogs are veterans just like me.”

Military and service dogs are trained in a number of areas, including security and explosive detection. 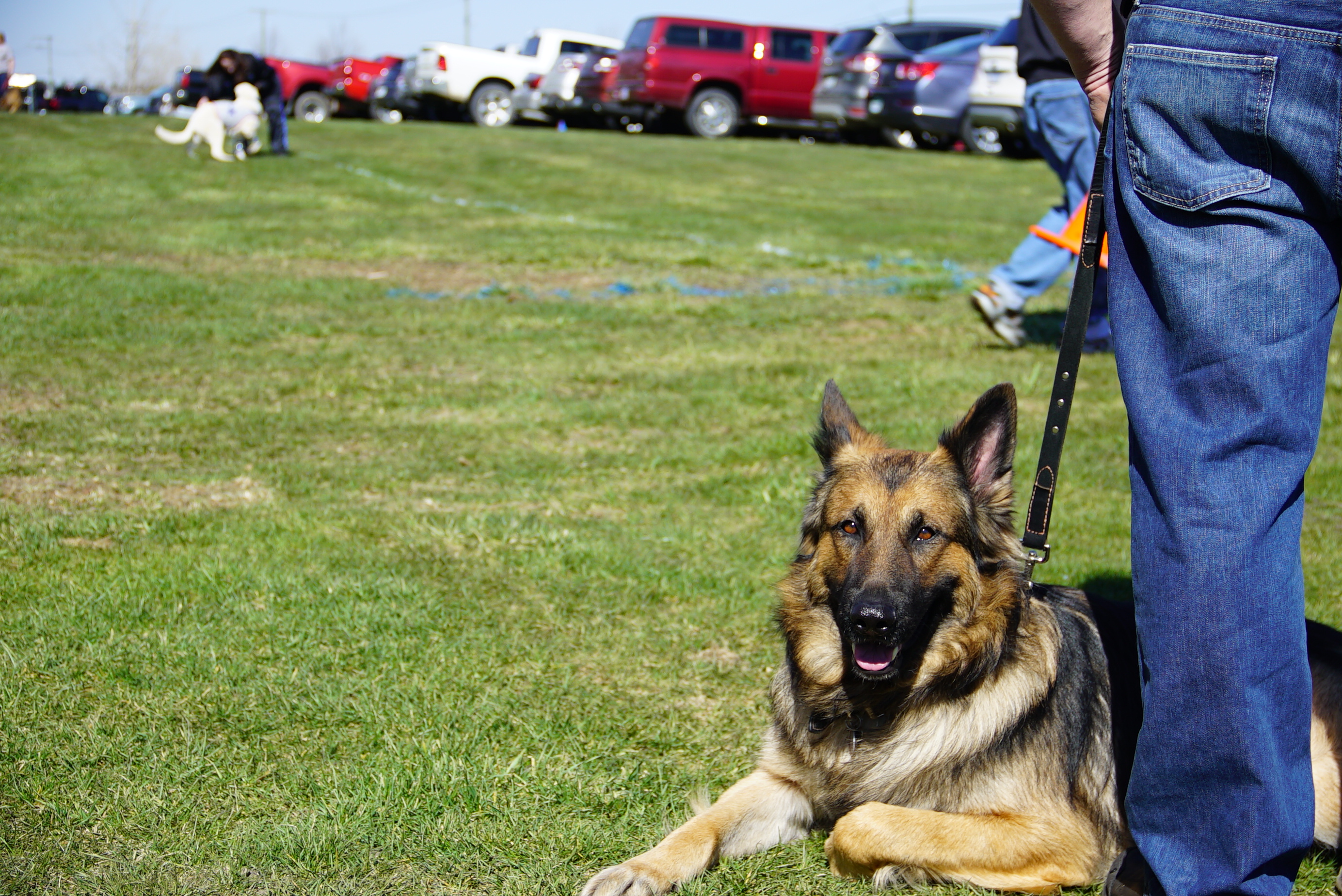 Every dog laid to rest at the Michigan War Dog Memorial receives a proper military service, including a full color guard, a bag piper and a procession escorted by eight German Shepard dogs. At the close of each service, the dogs in attendance let out a howl as a final tribute to their fallen friend. 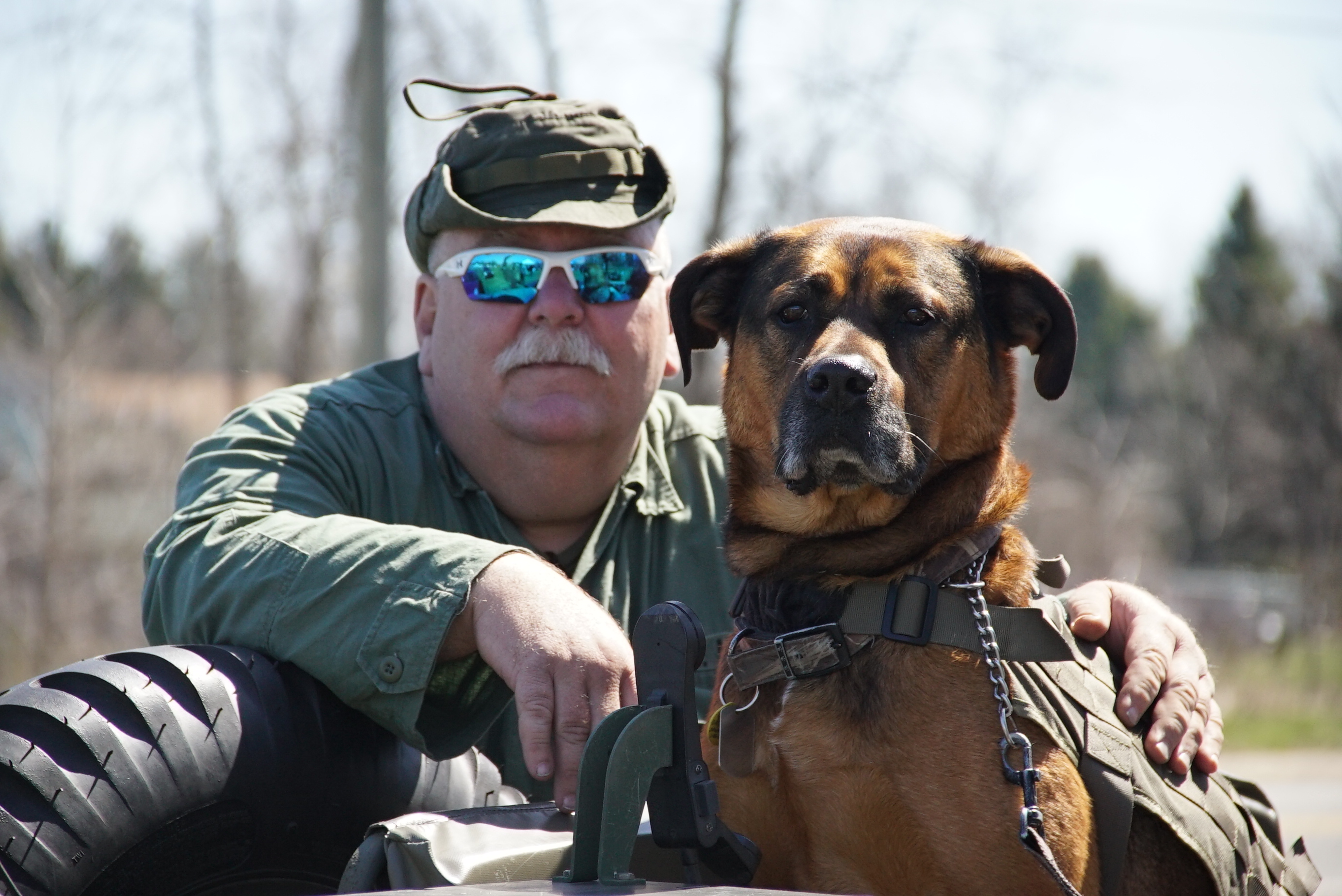 For more information about the Michigan War Dog Memorial, to find a future events or to become involved in the project, visit their website and connect with them on their Facebook page.

2 thoughts on “A Tribute to the Fallen: The Michigan War Dog Memorial”