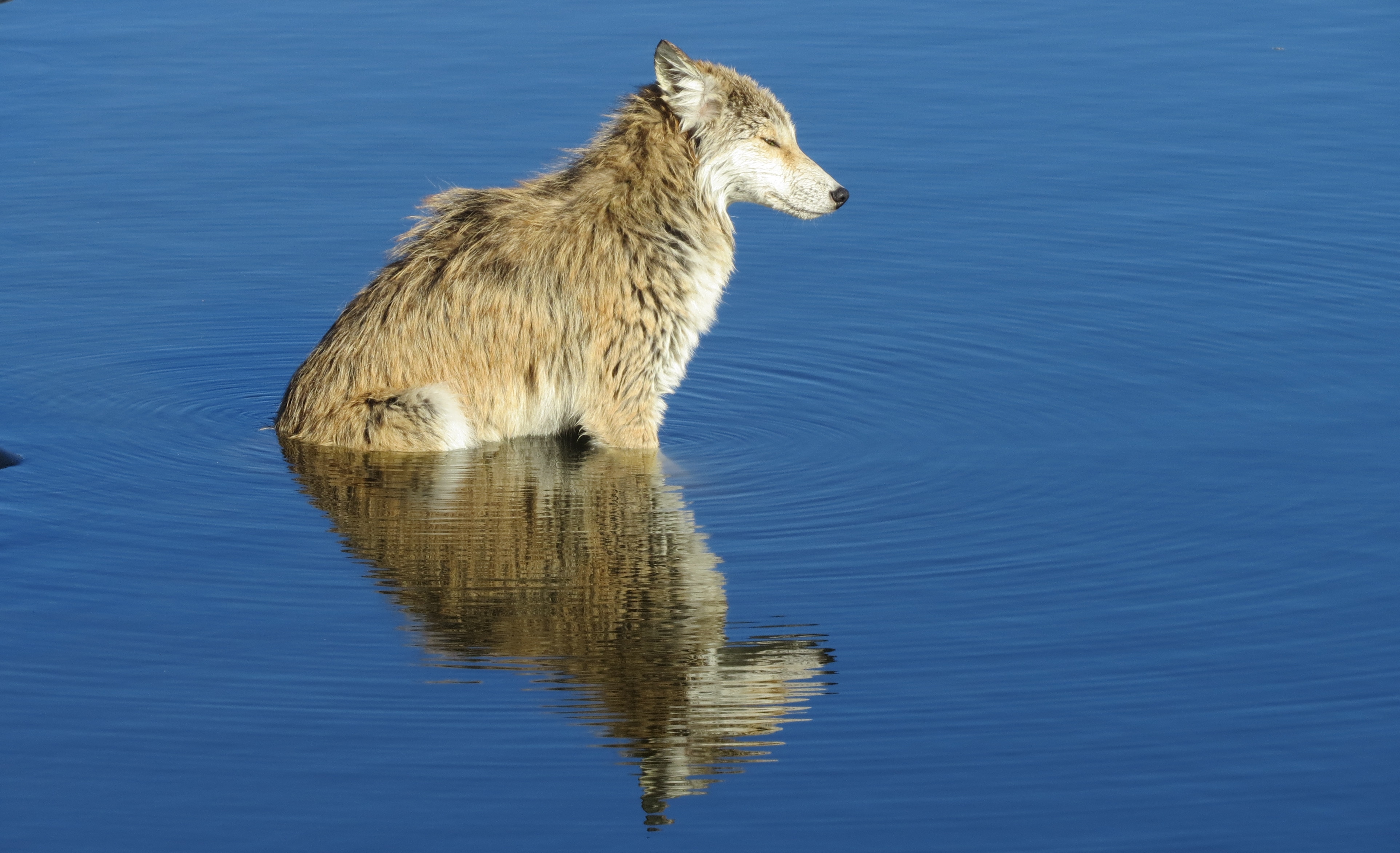 An exhausted and cold eastern coyote sits trapped in a retention pond, perhaps reflecting on its fate.

The eastern coyote may just be the most adaptable species of native North American wildlife found in Oakland County, and they do more than just survive in our midst, they thrive. Their survival is all about habitat and food. Rolling hills, productive wetlands, farm fields, forests, meadows and park lands, coupled with human created landscapes and travel corridors, create excellent habitat conditions. This elusive, and generally human shy, predator feeds on groundhogs, voles, mice, frogs, rabbits, goose eggs, fruits, vegetables and insects. In the month of November, road-killed deer and ‘gut-piles’ left by deer hunters keep the coyotes of the county well-fed.

Although coyotes are found throughout Southeast Michigan, they are heard more often than seen. Endless myths and media hype have transformed the coyote into a savage beast lurking in the shadows with mayhem on its mind. Coyote sightings are often misunderstood. If one looks honestly to the ways of the coyote with an inquisitive eye and thoughtful mind they will see the coyote for what it is; simply a coyote.

Every once in a while nature’s wildlife comes pounding on the door, whether we are ready or not. This was the case in the final week of October at a small fenced in retention pond in the northern reaches of the wilder side of Oakland County. An eastern coyote squeezed through the gates during the night, perhaps in pursuit of a rabbit or other small meaty morsel, but misjudged his pursuit’s moves and ended up sliding down a slippery, fiber coated embankment into the water. There was no way out for the very exhausted coyote.

I had the opportunity to take part in the scenario that unfolded hours later as other Oakland County Park’s employees tried to devise a rescue/extraction method for the coyote to escape. The coyote’s behavior captured in the photos of this blog makes this saga interesting. Some may accuse me of attributing human characteristics and feelings to a non-human creature, but by watching the coyote closely there was no doubt it was trying to work through the scenario. Did it know we were creating an escape plan? Perhaps not in the beginning, but as time progressed I think it did. The coyote never expressed a hint of aggression, and as we approached more closely  it cowered a bit and appeared timid. Coyotes (Canis Latrans) are highly intelligent members of the Dog Family.  I had every reason to believe this coyote, just like a family dog, read our body language and behavior correctly and knew we were not a threat. Perhaps coyotes are adapting to our ways and understanding our behavior better than we understand ourselves. Maybe they just try harder and that adds to their adaptability and survival in our midst.

An Oakland County Animal Control Officer looked on as the coyote looked away. The rescue chain fence ladder constructed by Oakland County Park’s employees is visible in the image.

The coyote remained patient and watchful as ‘the humans’ worked in a rescue plan.

Perhaps the photos that accompany this tale showing the coyotes expressions and body language just might help bury the seemingly endless sinister myth of the eastern coyote. I believe these wise “wild dogs” experience thoughts, sensations and real emotions just like our dogs, or perhaps even us.

How did the coyote escape? Our plan was to place a baited live trap attached to a rope next to the small ledge where the coyote had found as a place of refuge, but first a chain link ladder with wooden steps had to be put in place to give us access. The coyote watched the work proceed from about 20 feet away but did not wait for the live-trap extraction project to be completed. After a few cautious exploratory and tentative steps on the ladder, the paws were firmly placed and the coyote bolted up the slope to freedom, back to the ways of the wild. If we could see into the coyote’s mind I would surmise the emotions expressed were more than just of survival. Dare I say happy?

One thought on “The Saga of a Soggy Coyote”