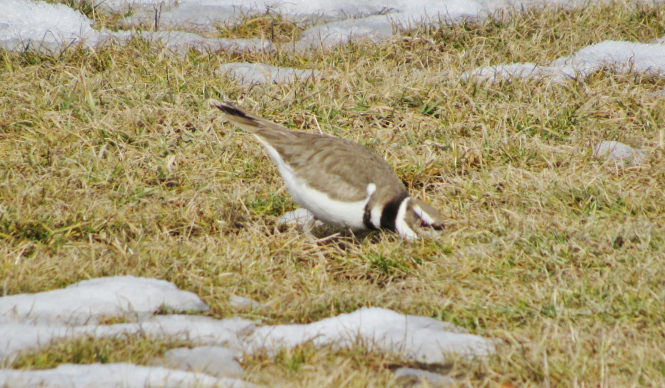 Forget the American Robin and the Eastern Bluebirds as being the winged harbingers of spring. In Oakland County, the impending arrival of spring was confirmed at the Red Oaks Dog Park early on Friday, March 13. It was a day when the mercury flirted with freezing, the sky was murky gray and slushy ice covered the new Red Oaks Trail that meanders west from the dog park. Even over the nearby din of Dequindre Road traffic, the shrill call of Killdeer (Charadrius vociferous) could be heard. I smiled as I remembered an Audubon article that mentioned 18th Century naturalists referring to this common member of the plover family as the Chattering Plover and the Noisy Plover. Their unforgettable and distinctly shrill call is music to the ears of anyone that welcomes spring. For the next 10 minutes, I watched a pair of shoreless shorebirds hunting for brunch – in a dog park.

The Killdeer exhibited characteristic feeding behavior. They ran five to ten feet, paused and stared closely at the ground for anything that seemed edible. Soon after, they broke into a sprint, stopping again in a few feet to check for more meaty morsels. It was a tough morning for them; the ground was just beginning to thaw. Yet, from their behavior, it looked like they may have found some grubs or perhaps half-frozen worms. A bit later, the pair took flight, traveled maybe 100 feet before landing and repeated the run-look-pause-peck ritual. 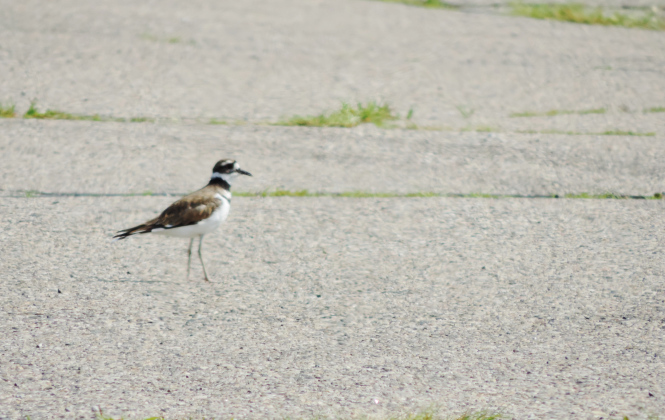 Killdeer are well adapted to urban environments and many nest on golf courses, gravel parking lots and even on flat roof tops. They breed in Oakland County, but winter in more southern states. They are also masters of deception. Their eggs are laid in shallow depressions created among pebbles or grass that constitute a nest. If and when an intruding human, dog, cat or other perceived danger gets too close, they enact the broken wing trick. A Killdeer will lower one wing and with much vocalization and fanfare, slowly run (yes, slowly run) away from the nest in an attempt to lure the predator away. Then in a sudden burst of flight, the Killdeer returns to the nest.

Most members of the plover family are found near shorelines of the Great Lakes, large lakes or the ocean. However, our Killdeer, the shoreless shorebird, does very well throughout the county, from the closely cropped lawns of schools to the edges of mega-parking lots. Many seek out their sustenance on our county golf courses; very short grass is their thing. 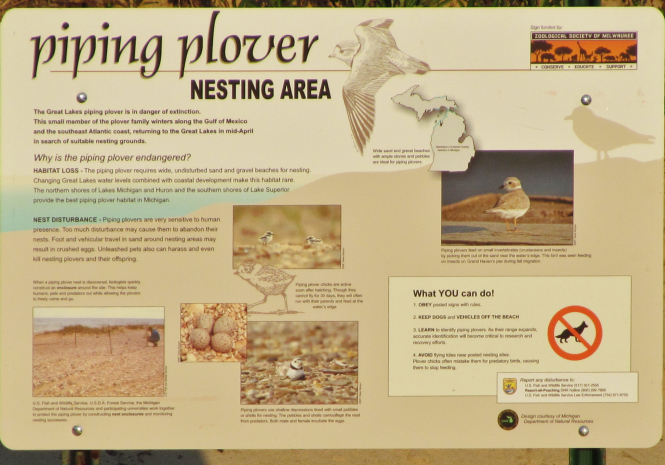 Also making its way back to the Great Lakes State is another plover species, the Piping Plover (Charadrius melodus). This shorebird that nests along secluded shorelines, is a federally endangered species, and is critically endangered in Michigan. The Piping Plover will bypass Oakland County as it returns to its protected sandbars at Sleeping Bear Dunes National Lakeshore in the Northwest corner of Michigan’s Lower Peninsula. 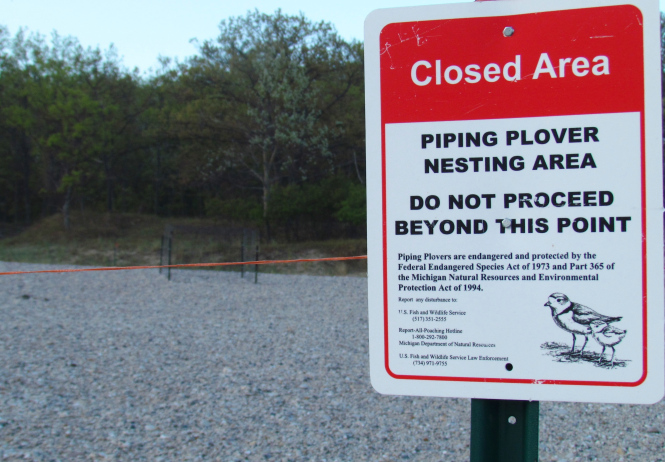 The greatest concentration of Piping Plovers in the Great Lakes occurs at Sleeping Bear Dunes National Lakeshore. Last year, 67 breeding pairs were confirmed in the entire Great Lakes Region, with over a third of this population making Sleeping Bear Dunes their summer home. That is more than a threefold increase from the 1980s. National Park Service states, “Piping plovers can be found at Sleeping Bear Dunes National Lakeshore from early April through mid-August. They return in April and early May after spending the fall and winter months on the Atlantic Coast and on the Gulf Coast from Florida to Texas. Piping plovers remain here through the summer to nest and raise their young. In mid-July, the females begin forming flocks and migrating south, leaving their mates to watch over the chicks until they learn to fly.” 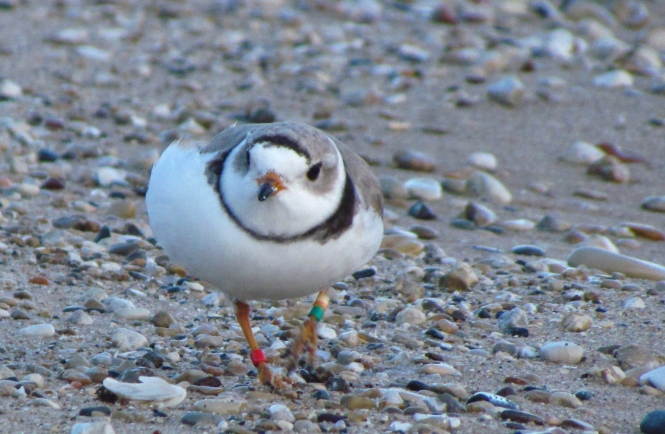 Robin-sized Piping Plovers are known for being stout in appearance with bright orange legs and for delivering a beautiful two note musical melody. In an effort to protect them, their known nesting areas are closed to human intrusion during the breeding season. Unfortunately, some park visitors disregard these boundaries or let their dogs run off leash in these areas, a threat to the very existence of the species. Piping Plovers build their nests and lay their eggs amid small smooth stones. A seemingly innocuous event, ranging from a storm, to a hungry predator or even a casual human intrusion, can have disastrous consequences for this critically endangered shorebird. 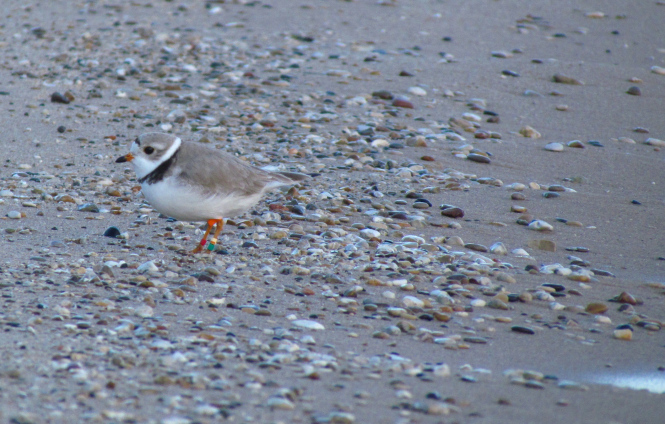 Last summer, I had the extreme pleasure to be sitting a few hundred feet from a closed area near the mouth of the Platte River. A banded Piping Plover, outside of the exclusion zone, trotted along the shoreline beneath my sandy perch. He continued his hunt for tiny invertebrates, a hunt that appeared similar to the run-pause-peck-run behavior of their Oakland County kin, the larger and noisier Killdeer. Both species of Plovers, the Killdeer and Piping, are very much at home in their seasonal habitats: whether it be at an Oakland County Dog Park or the Sleeping Bear Dunes National Lakeshore.

To hear www.audubon.org’s songs and calls of the Killdeer, click on the links below: