Coyotes, foxes and great horned owls take keen interest in the wild turkey flocks that inhabit the oak-rich woodlands and brushy fields of the wilder side of Oakland County. When luck and hunting skill is on their side, this trio of stealthy predators often feasts on fine, feathery dinners.

These images of a coyote hunting and a wild turkey in the same field were captured by an infrared activated wildlife camera in northern Oakland County. 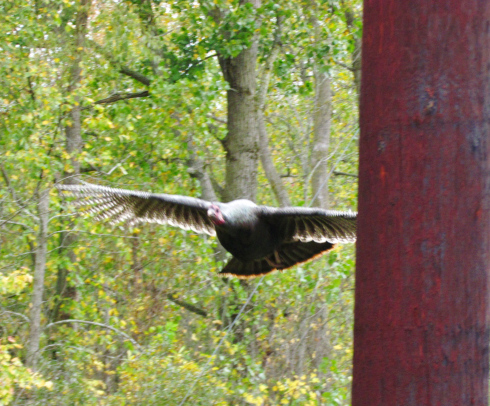 A wild turkey glides down from tree tops near an ITC transmission line in the heat of the summer.

Catching a turkey is not as easy as it may seem. For unlike their extremely overweight, lily white, farm-bred kin that are so heavy that they are unable to fly, wild turkeys are powerful fliers. A wild turkey (Meleagris gallopavo) can run at 20 miles an hour and maintain brief bursts of short flight reaching nearly 50 miles an hour. Even though they can be speedy, the turkeys of Oakland County prefer to spend most of their days warily trotting through the woodlands. When it’s time to roost for the night, they rocket up to tree tops. 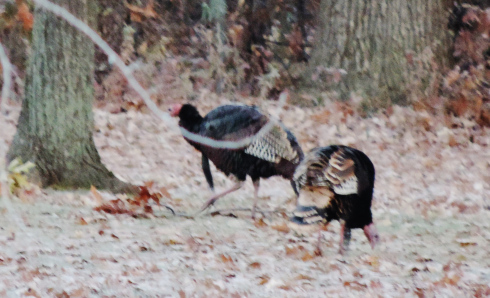 Turkeys are omnivorous, eating almost anything they can find during the warmer months. Their diet includes juicy berries, frogs, insects and even snakes. With winter just about here, they use their powerful feet to kick about under leaves and snow in search of acorns, hibernating bugs and grubs. Once snow blankets the landscape, turkey flocks settle into sheltered areas that offer more cover and easily accessible buried foods. 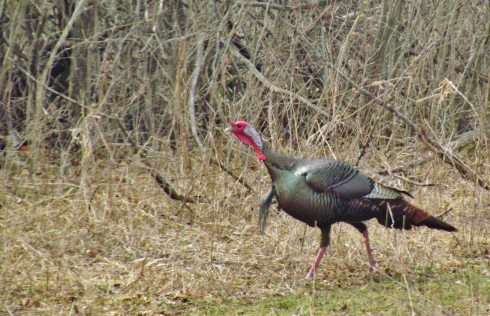 According to the National Wild Turkey Federation, “5,000 – 6,000 feathers cover the body of an adult turkey in patterns called feather tracts. A turkey’s feathers provide a variety of survival functions – they keep him warm and dry, allow him to fly, feel and show off for the opposite sex. Most of the feathers exhibit a metallic glittering, called iridescence, with varying colors of red, green, copper, bronze and gold. The gobbler, or male turkey, is more colorful, while the hen is a drab brownish or lighter color to camouflage her with her surroundings.” 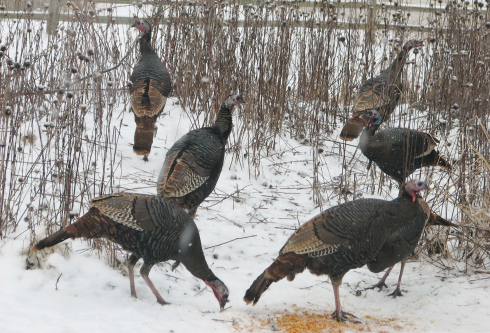 During spring and summer, the seasonal behavioral patterns of nesting and thick foliage make it challenging to spot this rather common and very colorful bird. Now that most leaves are down and snow coats the earth, turkeys and their tracks and trails are easy to find. The larger Oakland County Parks, Huron-Clinton Metroparks, Michigan Department of Natural Resources State Recreation Areas and sections of the Paint Creek, Polly Ann and Clinton River trails are all prime turkey habitat. Interestingly, this very common bird was Benjamin Franklin’s choice to be the national bird. Residents of northern Oakland County seldom have to travel far to see a wild turkey. Many turkeys trot right up to their rural bird feeders to scrounge for easy pickings during the harsh days of winter. Perhaps for that, they are thankful.

Be sure to visit DestinationOakland for detailed information on all 13 Oakland County Parks.

One thought on “Turkey Tales on Oakland Trails”