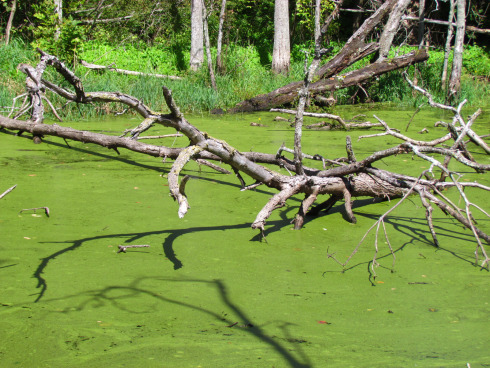 Carpets of duckweed cover many small ponds and wooded wetlands.

August is the season of the duckweed, a wetland plant that thrives on the Wilder Side of Oakland County in sheltered bays, roadside ditches, wetlands and ponds. This small plant (the tiniest of our flowering plants) floats on the surface of still waters in great green mats, sometimes stretching from one side of the water source to the other.  Botanists boast that the surface area covered by duckweed can double in two days – which can be good news for waterfowl. 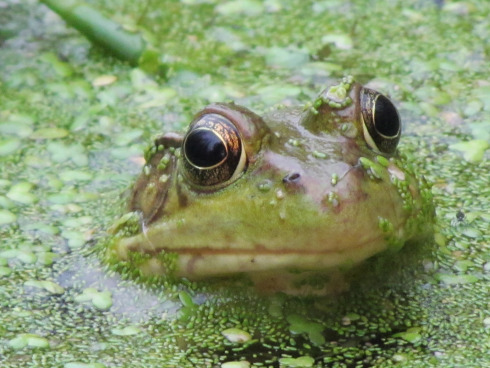 A green frog waits in his duckweed hideaway to ambush bugs.

Do ducks eat duckweed? The answer is well known to patient observers of nature – especially during summer’s sultry days at duckweed-coated waters near woodlands.  Many species of waterfowl flock to these “all you can eat duckweed buffets”, with the beautiful wood duck bringing the biggest appetite. Last week, I sat near a small pond that was totally covered with duckweed and watched a hen wood duck stand guard over her brood of 12 as they paddled slowly about, slurping in their soup of duckweed.

Duckweed is not just for the wood duck. Many other species of waterfowl feast on duckweed including mute swans, mallards, domestic ducks and teals.  I have witnessed muskrats eating duckweed, and literature states that beavers too consume this plant in the heat of the summer.   Duckweed provides great habitat for green frogs and bullfrogs, allowing them to hide in plain sight to await the approach of bugs. Northern water snakes hunt in the duckweed mats, and frogs and small turtles that swim in the mat and the occasional bird that loiters near the mat often fall prey. 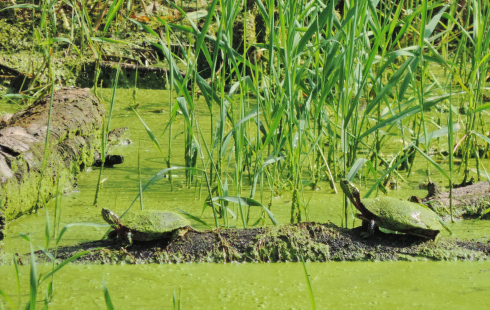 Duckweed often sticks to the backs of painted turtles when they emerge to sun on logs.

Individual duckweed plants are so tiny they have been documented being sucked up in thunderstorm updrafts and returning to earth in hail stones.  But the more typical way duckweed finds new waters is on the webbed feet of ducks or caught in the fur of muskrats and beavers as they travel from one wetland to another on the Wilder Side of Oakland County.

6 thoughts on “Duckweeds: Not Just for Ducks!”