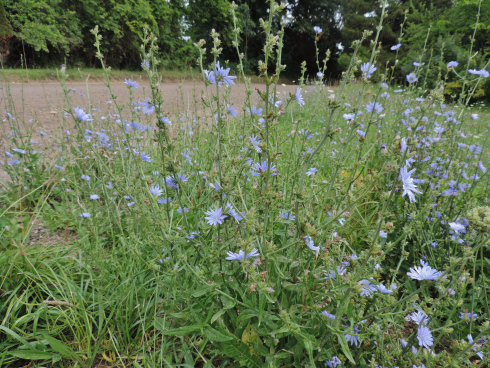 Chicory thrives along the side of many rural county roads.

For the chicory plant, any part of Oakland County that does not come under the mower’s blade or is not bathed in herbicides becomes the “Wilder Side of Oakland County”. Chicory (Cichorium intybus) is one of our most common, easily recognizable and delicately beautiful roadside weeds of mid-summer. But for me, and perhaps thousands of of others across the county, chicory is more than an abundant roadside weed. Chicory is a nutritious and highly versatile wild plant that holds a history of domestic use going back to a time before the American Revolution. 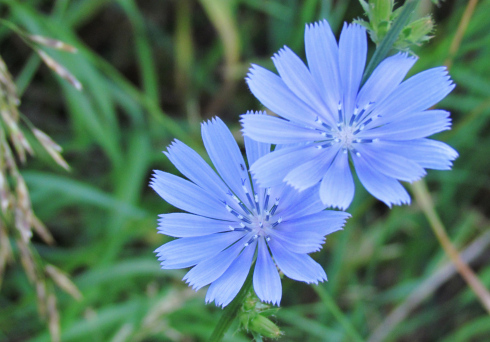 The delicate pale blue petals of chicory are unmistakable.

HISTORY: Although native to North Africa, Europe and Western Asia, chicory is believed to have been brought to North America in the early 1700s. The plant thrives in disturbed soils and open fields, and quickly spread across large swaths of the country. During the Civil War, a blockade of the New Orleans harbor cut off the importation of coffee to the local population – a population with heavy influence of French culture. The locals quickly reverted back to what they already knew, and used the dried and roasted chicory roots as a coffee substitute.

Herbal records indicate chicory was cultivated by Egyptians and grown for its medicinal properties by medieval monks.  In addition to its modern day coffee use, tender chicory leaves find their way into salads and the roots and leaf buds are boiled and eaten. 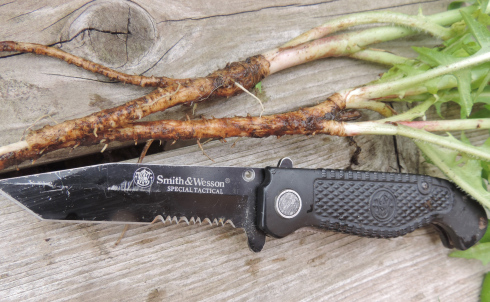 Chicory roots can be boiled as a vegetable or dried and roasted for a coffee substitute.

Check the coffee shelves of Oakland County grocery stores today and you will find that chicory root remains an ingredient in some brands.

Chicory is also one of the easiest plants to identify, even if one has no botanical or foraging experience.  It is what some would say “textbook perfect” and looks exactly like it is described, with pale blue blossoms and stiff stems that grow three or four feet high. It also has a growth behavior pattern that naturalists and keen-eyed followers of nature’s way notice: the abundant blossoms all open and close at almost the exact same time. 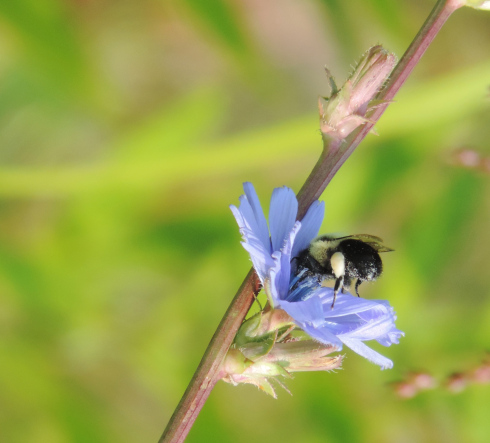 Bees and other insects pay regular visits to the chicory blossoms.